I have a friend, a U.S. friend, who makes his living as a short-order cook. He says it is absolutely the best job. “You can go anywhere in the world and find work,” he says.

In 2002, he decided to go to Salt Lake City to take in the Winter Olympics. “I drove out there and had a job about 10 minutes after I got to town. I always carry a grub stake so I found a place to stay and settled in to enjoy the town and the Games.”

Just before the opening ceremonies, he thought of me. Like a lot of Americans, he doesn’t know much about Canada. Whatever, he looked up the address of Canada House, drove over and asked for me.

“Is Norris McDonald here?” he asked the girl at the reception desk.

“I don’t think so — but I recognize the name,” she replied, undoubtedly fibbing. “Is he a friend of yours?”

Now, my friend is a hail-fellow-well-met guy and before he left that day, he was told he was welcome to return any time he was in the neighbourhood. Which he did, frequently, to sample what he called the best beer on the planet, Molson Canadian, which happened to be free.

“They made me an honorary Canadian,” he told me. “They gave me a Maple Leaf scarf and a toque and coached me on when to say ‘eh?’ They even invited me to watch the last Canada-U.S. hockey game with them, the gold medal game. There must have been 200 people in the place and I was the only American, cheering for our guys.

“We got thumped, but the beer was still good.”

I was thinking about him, and those Olympics, a few weeks ago when I was in Utah to drive the 2019 Ford Edge and the Edge ST. The Olympic motto is Citius, Altius, Fortius, which is Latin for “Faster, Higher, Stronger.” After driving those cars, I would suggest Ford has nailed the “faster” and “stronger” part. The mountains around Salt Lake City took care of the “higher.”

While both cars were on offer, and many of the same features are on each, the Edge ST was the clearly the star of the show. So here is what you have to know.

The all-wheel-drive ST — Ford’s first performance SUV — is powered by a 2.7-litre, twin-turbocharged, V6 EcoBoost engine, which produces 335 hp and 380 lb-ft of torque. It is driven by an eight-speed automatic transmission — but there are paddle shifters available if you want to shift for yourself. Lots of pep, the ST can go from zero to 100 km/h in under six seconds.

There is no gear selector on the Edge’s post or console. On all models, Ford has gone to a rotary dial shifter.

The ST has dual exhausts and to make engine noise sound even better, active noise control uses the speakers to give off a real growl. The front and rear fascia are newly styled, as is the wide-mesh grille, which improves cooling.

There is no gear selector on the post or console. On all models, Ford has gone to a rotary dial shifter. The Sport Mode button is in the middle, so all you have to do is push it to experience more aggressive throttle response, among other things.

Fuel economy is 12.6 L/100 km city, 9.2 L/100 km highway and 11.0 L/100 km combined. In an effort to keep fuel consumption down, all-wheel-drive disconnect switches between front-wheel drive and all-wheel drive without input from the driver.

Twenty-inch wheels are standard on Edge ST but you can upgrade to 21-inch.

I find this a little confusing. This is a performance car and there is a Performance Brake Package available that includes front and rear vented disc brakes, 345-mm front rotors, red calipers, fade-resistant brake pads and Pirelli summer-only tires. And yet those last three words explain why this package is not available in Canada because we use winter tires.

As others have suggested, though: if the demand is there, Ford will likely come up with a solution.

The Edge comes with a bunch of driver-assist technologies called Ford Co-Pilot360, which is standard on all models. Included are: pre-collision assist with automatic emergency braking (including pedestrian detection, forward collision warning and dynamic brake support); blind spot information system with cross-traffic alert; lane-keeping; rear backup camera with built-in washer, and automatic high-beam headlights (in which oncoming traffic is detected and brightness is adjusted).

In addition — and this one is interesting — post-collision braking is standard on all models. To reduce the impact of a potential secondary collision when an initial collision is detected, the brakes are applied to prevent that from happening. Any oval-track race-car driver will tell you that the first crash into a wall is quickly followed by a second, so Ford is moving to prevent this from happening on the road.

The Edge boasts a voice-recognition communications and entertainment system called FordPass Connect that, in connecting with the 4G LTE Wi-Fi hot spot, gives you internet access and allows your smartphone to do all sorts of things with the Edge, such as lock and unlock the doors. It’s also compatible with the Amazon Alexa app (Alexa, please open the garage door. Alexa, adjust our home thermostat. And so-on). Apple CarPlay and Android Auto are — of course — also available.

I particularly like this: the app gives you access to Waze navigation and for someone who owns a Ford product and has never been able to get the navigation to work properly, this is good news, indeed.

Joe Baker, program manager for all the Edge vehicles, said the Edge ST evolved over the past three years from paper, to drawings, to models, to metal and then into the vehicles we drove in Utah.

He said the best thing about the ST is that Ford has put a performance vehicle on the road “that gives you the utility and ability to take your family with you. And load cargo in the back. To me, that’s amazing.”

“You look at a sports car,” he said, “A lot of times you can’t put people in the second row. You can pull a trailer behind this thing. And at the same you feel like you’re in a sports car. When it all came together, the whole was greater than the sum of the parts.” 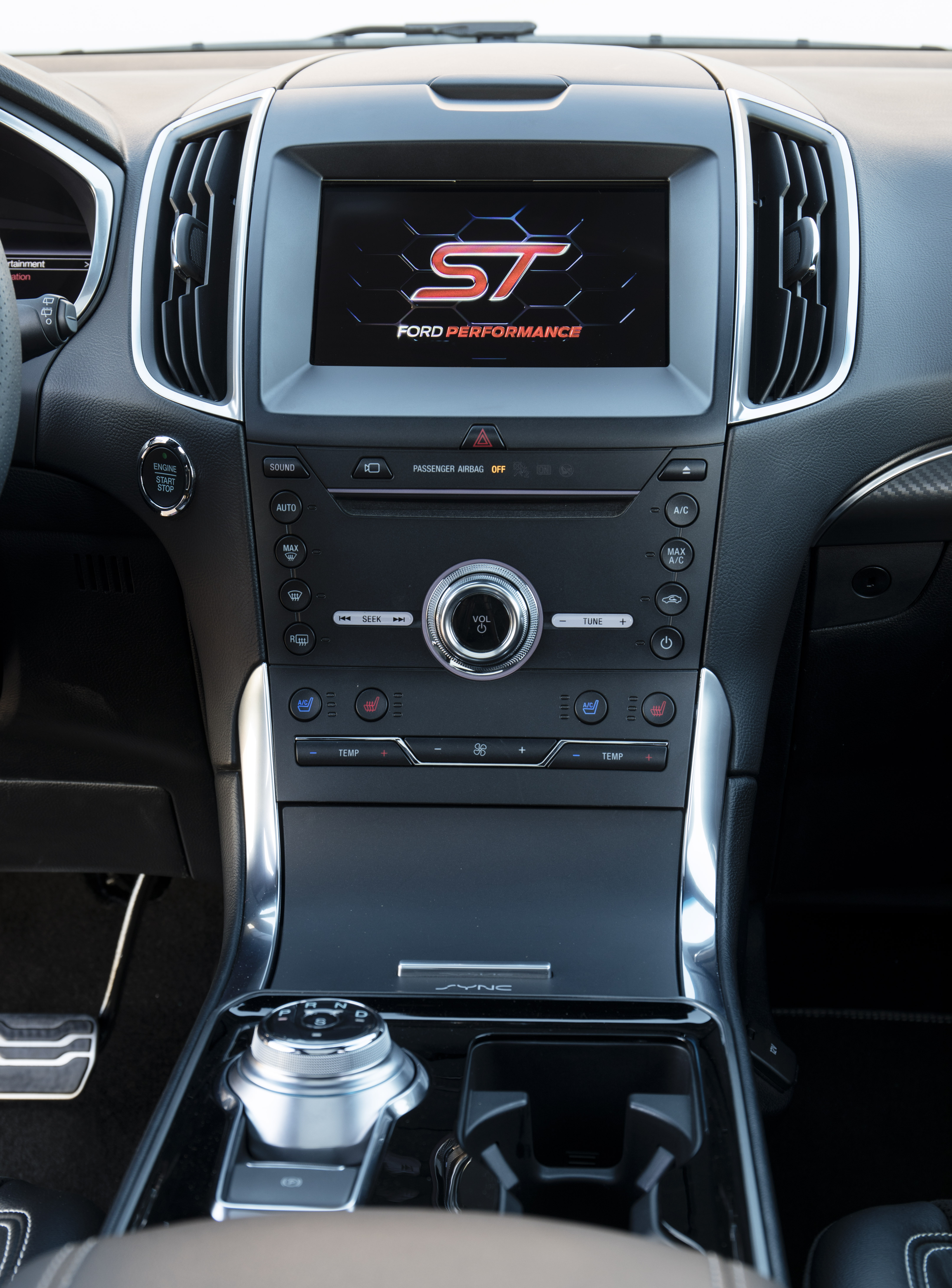 Ford had a Titanium Elite model on hand and Baker said the best thing about it was the “upscale look we put on this thing. If you look on our current Edge, it’s a very good-looking car but we took it up a level with the Titanium. At-a-glance, it makes me very proud after working on it for three years.”

My co-driver, who fancies himself to be as talented as Lewis Hamilton, put the ST through its paces the first afternoon and the car handled the twisty mountain roads — lots of switchbacks and elevation changes — with aplomb.

Now, nothing is perfect. On that first afternoon, my co-driver sensed there was a power problem and it turned out there was a software glitch and organizers had to find us another car. These things happen. The replacement car performed perfectly.

As is often the case on these trips, my job was to test the driver aids and to order Alexa around. For instance, when I said “Alexa, start the Ford ST,” the car started. When I got into it, however, I had to start it again in order to be able to drive it away (which is a safety feature).

And I tried out the Ford parking assist feature, which worked perfectly. You can’t let it completely park the car for you, though, or you could crash. You have to control the speed — i.e., have a foot on the brake — in order to let the technology work its wonder.

I have to say I was very, very impressed by the emergency braking. I was behind the wheel, we were going 20 miles an hour (this was in the U.S.) and we were heading straight toward a “car” that was stopped in the middle of the road (it was made of plastic, in case there was another glitch). 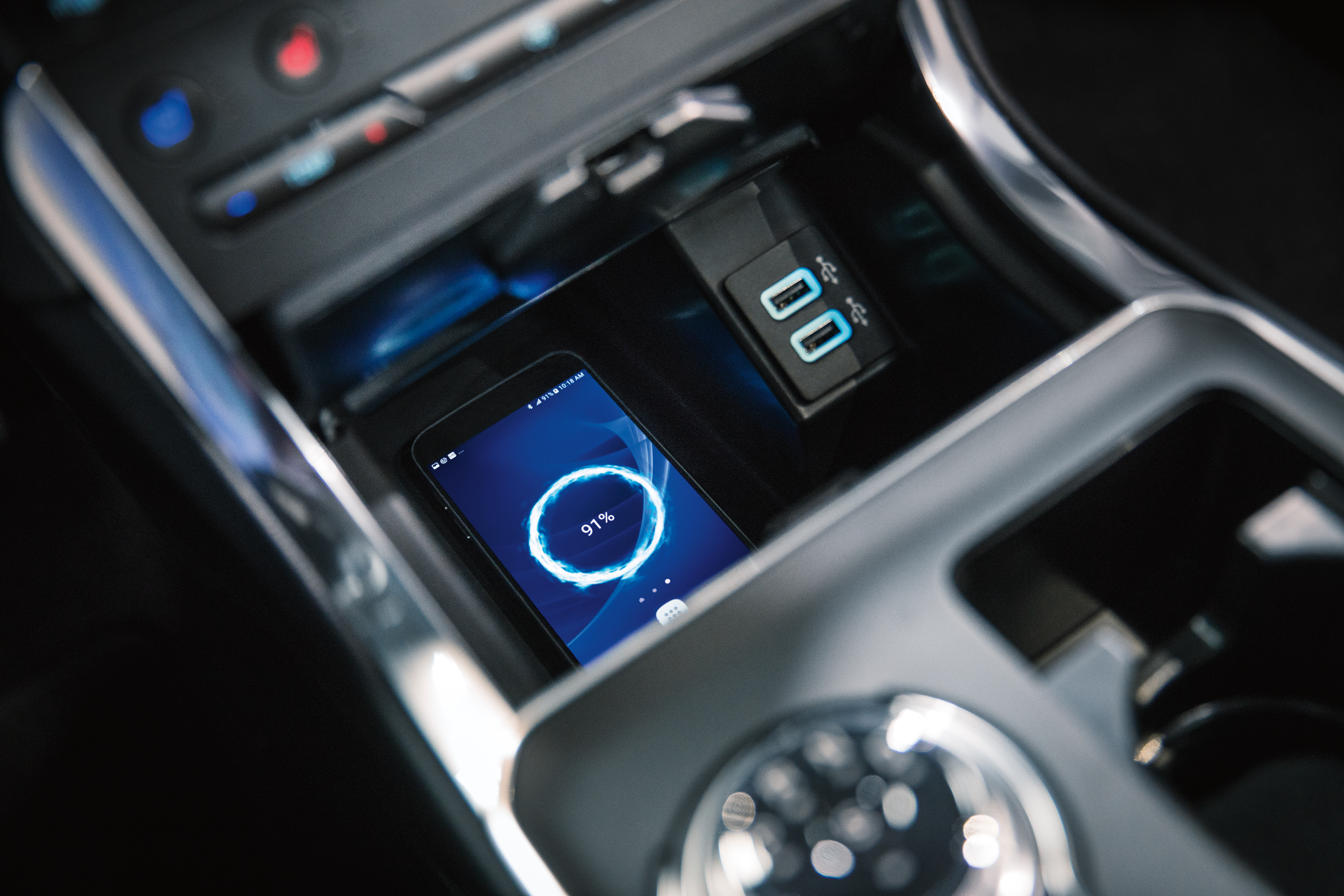 I have to admit I was ready to hit the brake pedal — and then the car just stopped. Bingo! Just like that. This feature is on many — if not all — of the new-model cars these days and I consider it to be the greatest safety improvement in the history of the automobile.

I did encounter a problem with one of the driver-assist technologies. I was on an expressway going about 60 mph with the lane-keeping and lane-centring system switched on. For that technology to work, sensors have to lock onto lines painted on the road.

So we’re travelling in the right lane and my co-driver and I are talking and everything seems to be going well and I suddenly realize the car is starting to head off the highway and onto an off-ramp. I had to steer the car to the left to get it past the off-ramp and back in the correct lane.

Technology is wonderful but you have to keep an eye on it.

The Edge — and particularly the Titanium — is a lovely looking automobile from the outside and top of the mountain on the inside. Ford`s designers can take a bow on this one.

At end of day, I recommend the Ford Edge and particularly the ST. While driving along, it struck me as being the perfect car for a young family. Dad can still have his sports car and he and the rest of the family can still go shopping or to the arena or to the cottage together.

It’s the perfect compromise for when there are competing interests.