Fashionably late to the SUV party.

COEUR D’ALENE, IDAHO—It’s hard to believe, but a couple of years ago Hyundai was criticized in some circles (not this one) for being late to the SUV party.

Yes, they had Tucson and two sizes of Santa Fe. But that left several stones in the SUV pile unturned.

Lawrence Hamilton, Hyundai Canada’s director of marketing, points out the gaps in their lineup are rapidly being filled.

Santa Fe and Tucson continue, the former aimed at the post-children family, the latter at supposedly “adventurous” pre-kiddies couples.

The more recent Kona is an “urban” SUV, a term only a marketing person could invent, and is aimed at career-oriented younger people who would rather wield a bigger, taller, thirstier vehicle around crowded city streets than a more agile, more fuel- and emissions-efficient and cheaper-to-run station wagon.

Which is just about everybody, these days. 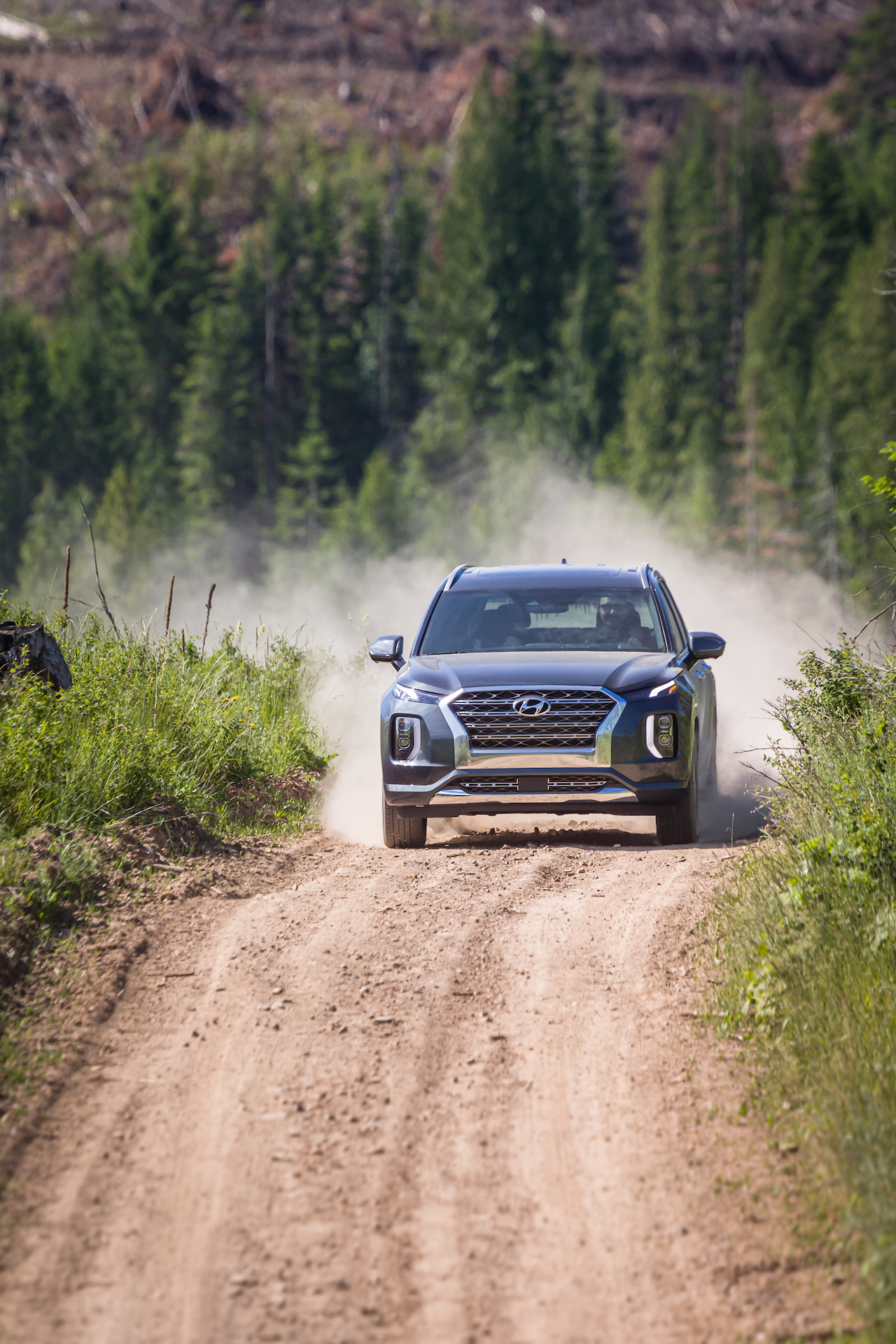 Later this year, the bottom rung of Hyundai’s SUV ladder will be filled by the Venue.

Today, we’re talking about their family-oriented mid-size SUV, the Palisade. It’s on sale now at Hyundai stores starting at $38,499 for the base trim level model, labelled “Essential,” with front-wheel drive, of which Hyundai Canada expects to sell approximately none.

The option list has to be the shortest in the industry. Pick your trim level and colour, and if that colour is either a mica or a pearl paint, it’s another $200.

According to my dictionary, “palisade” is a defensive fortification made of stakes. The plural, “palisades,” means a line of cliffs.

Hyundai’s Hamilton said the idea of cliffs implies something strong and solid, the sort of image they were looking for with their new SUV.

Then again, the specific “palisades” he was referring to are in California, which always seems to be on the verge of tumbling into the Pacific Ocean.

At least it’s a name, and not a meaningless collection of alphanumeric characters.

If you think Palisade looks like the Kia Telluride (yet another American geographical reference) then move to the head of the class. It’s pretty much bolt-for-bolt mechanically identical, with styling and equipment-level differences to distinguish the two.

It’s interesting that Kia and Hyundai, sisters under the skin across most of their respective product lines, barely acknowledge each other’s existence when talking competitive vehicles. 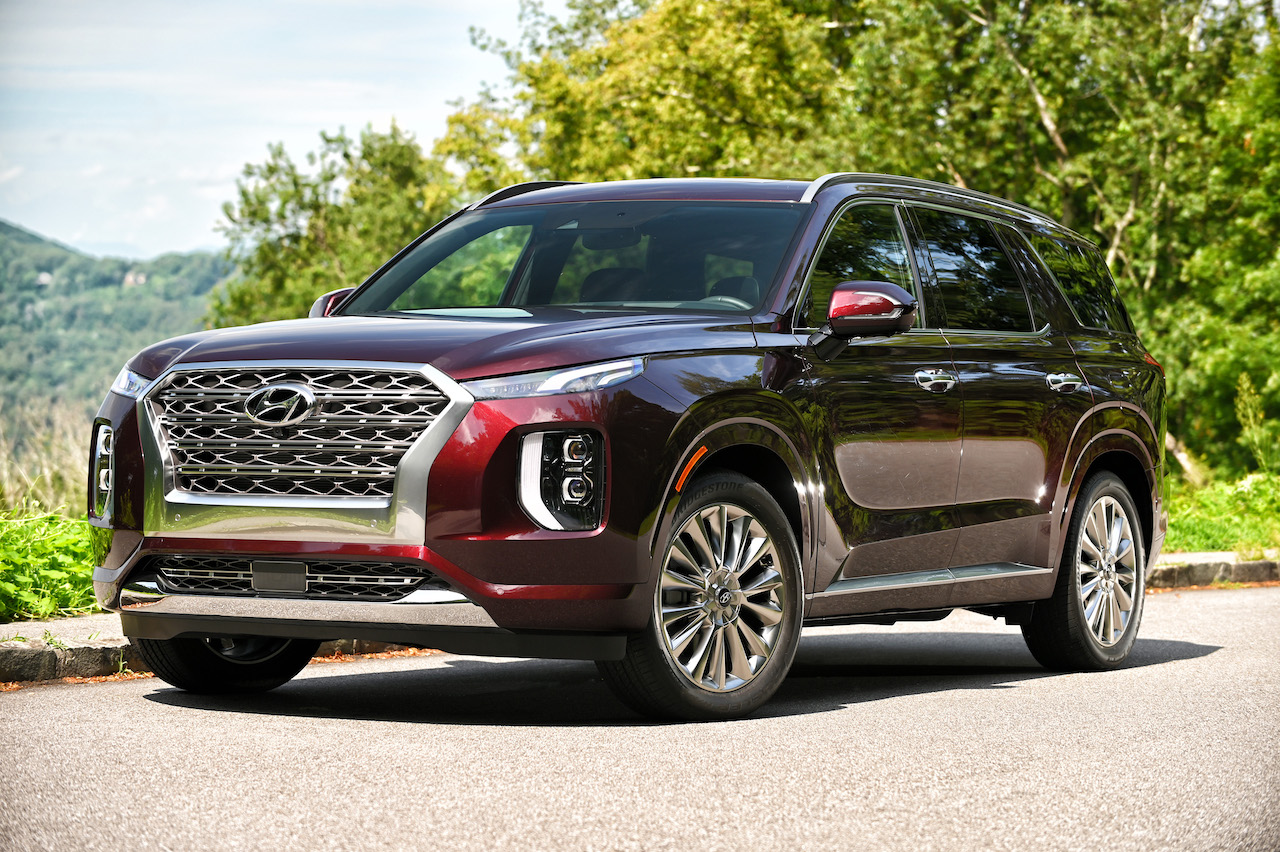 It’s tricky doing anything different with an SUV styling-wise. Box for engine, box for people and stuff.

Palisade has some interesting differences, such as lower-than-usual projector-beam headlights (LEDs on Luxury and Ultimate trim levels) that not only look cool, but also have the advantage of not blinding the driver of the car ahead of you.

And in case you still haven’t learned how to adjust your side-view mirrors correctly (much further out than you were taught in driver’s ed so there is no such thing as a blind spot) Palisade’s Ultimate model now shows on the screen right in front of you what’s beside your vehicle when you put the turn signal on.

This cycle also tends to reduce peak torque, hence is often used in hybrid powertrains where the electric motor can fill in that torque deficiency.

The company notes that these are “preliminary” numbers, so while they may change without notice, they’ll be in this ballpark.

That 5,200 is a fairly high torque peak r.p.m., but the torque curve is reasonably flat and the engine provides decent performance, aided by an eight-speed SHIFTRONIC transmission.

There is no shift lever per se, just big buttons on the console for Park, Drive, Reverse and Neutral.

When you think about how often you actually touch the shift lever in an automatic-equipped car — typically twice: once when you start your car, maybe Reverse to Drive, and again when you switch off — it doesn’t really make sense to tie up valuable centre console space with shift buttons. Hyundai is partway to getting this function out of the way entirely.

If you think you can do a better job of selecting ratios than this transmission does by itself (hint: you probably can’t) you can play with the steering column shift paddles.

The four-wheel drive system is Hyundai’s HTRAC system with a variety of modes — Comfort, Eco, Sport and Smart — depending on road conditions. The latter appears to learn your driving style and adapts the car to you. 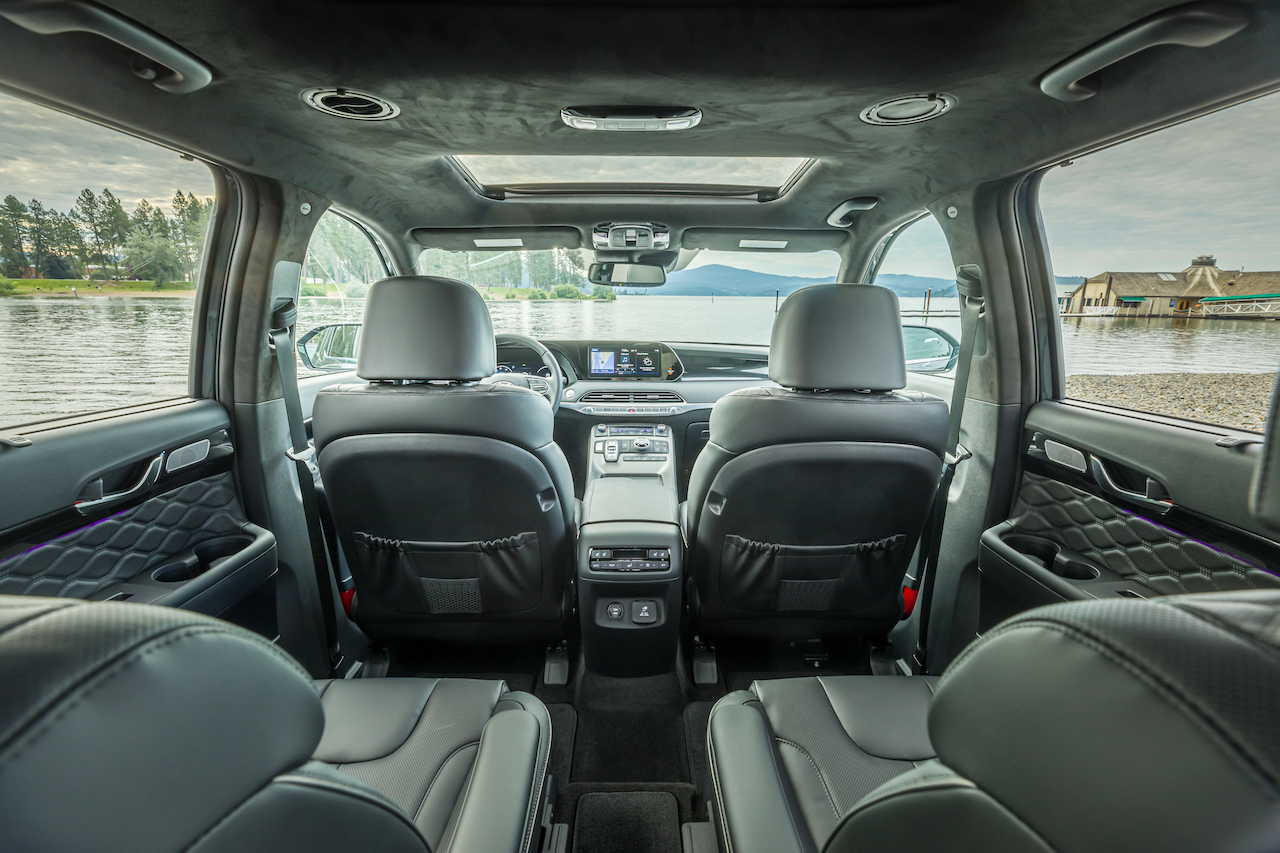 It even monitors the windshield wipers — if they’re on, presumably it’s raining outside and the system responds accordingly to reduce the chance of wheelspin.

Palisade also offers three driving mode selections — Snow, Mud and Sand — which modify driving characteristics to suit. For example, Snow mode starts the vehicle in second gear to reduce the chances of wheelspin, and speeds up the gearchanges to maintain momentum in the slippery stuff.

The interior is beautifully finished with much higher quality materials than you have a right to expect at this price level.

There are more proper knobs for minor control functions than we see in most new cars, so huzzah to Hyundai for that.

The buttons that are there are large and easily found.

There is also a boatload of electronic goodies aboard, including on our Ultimate trim level truck Hyundai’s first all-digital instrument cluster, a bright and clear 12.3 inch unit that changes its display depending on the chosen drive mode.

Safety is everywhere, including Safe Exit Assist, which checks whether vehicles are approaching from the rear and locks these doors to reduce the chance of you opening the door and stepping into traffic.

Cup holders and cubby bins abound, including a Volvo-like bin under the centre console.

We spent our time in a range-topping Ultimate, but since the oily bits are shared across the product range, our driving impressions should work for all trim levels.

I found the front seats comfortable and supportive. Mind you, I’m about 95th percentile in height and weight. If you’re markedly bigger or smaller, you’ll have to check this out for yourselves; but then, you’re already used to doing that.

As noted above, our truck had the middle-row captain’s chairs, which I also found comfortable, bordering on luxurious.

Access to the third row shouldn’t be a problem for young kids; older, larger and/or less agile types can take advantage of the second row seats’ tilt-and-slide function. 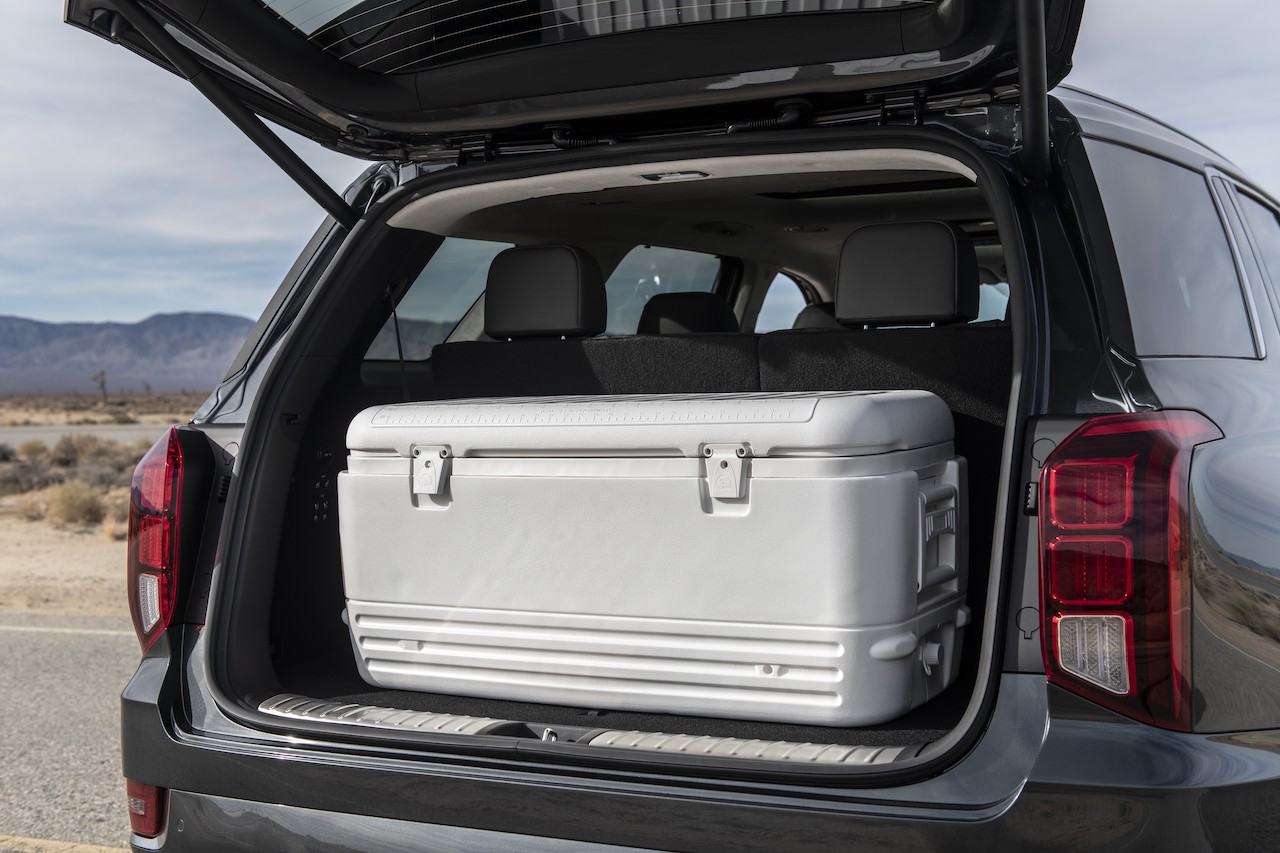 There’s even decent room in that third row for moderately-sized adults.

Of course, you can fold all or some of the rear seats down to increase cargo capacity. On the upscale models, this can be done by a series of push-buttons just inside the tailgate.

The truck rides very well, at least as far as we could determine on the mostly well-finished roads in this lovely mountainous state.

Mountainous? Yep; Idaho is perhaps best-known for producing potatoes, but those are grown in the flatlands further to the south of this stunning little town.

Handling is on the positive side of the mid-size SUV spectrum. It’s no sports car and doesn’t pretend to be, but the steering is reasonably communicative.

The full range of driver aids is on board. You can always switch them off if, y’know, you’d actually rather drive the truck yourself. 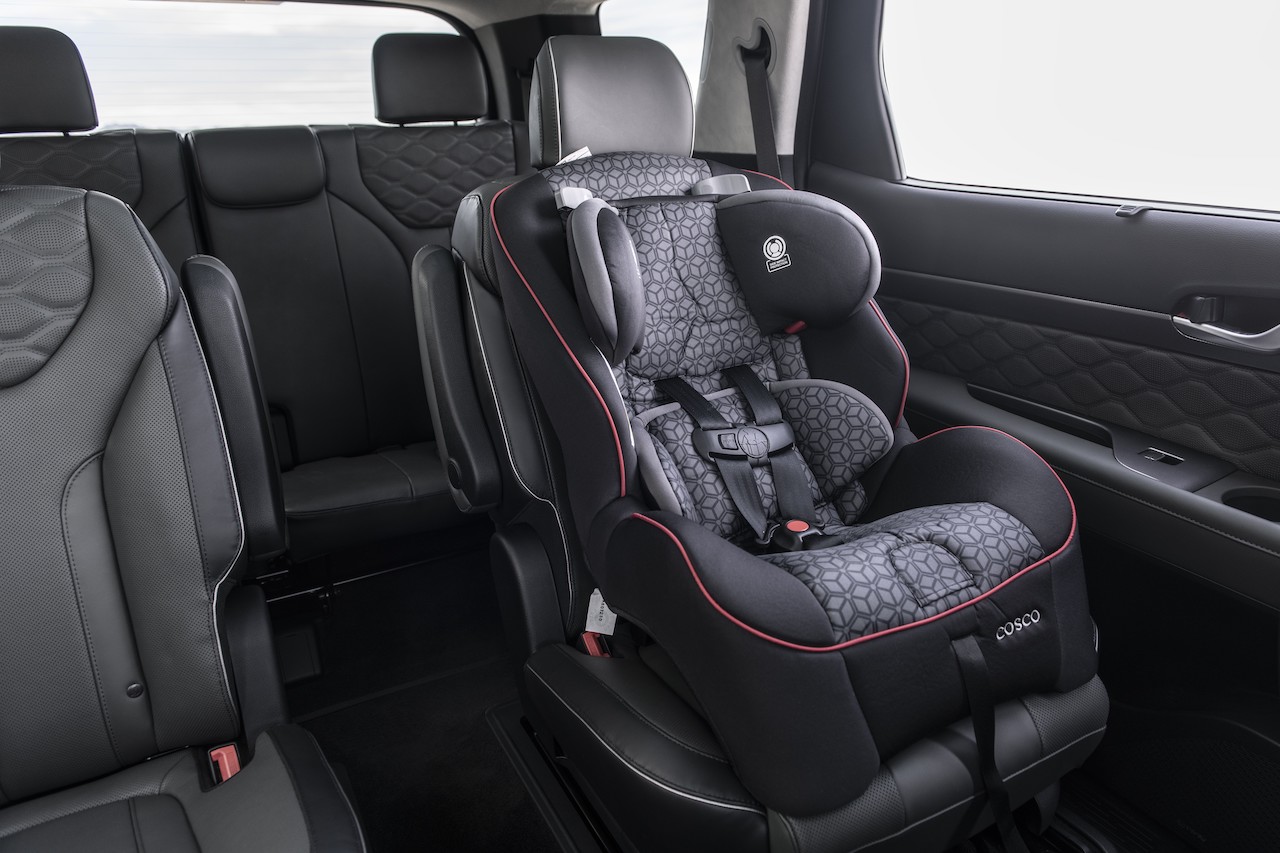 Hyundai set up a demonstration of Palisade’s four-wheel drive system, not with some gigantic hill to climb, but with a set of rollers in a frame. A Hyundai test-driver drove up on these, which gave the vehicle approximately zero coefficient of friction. In rear-wheel drive, he could barely move the truck at all. In 4×4 mode, it stumbled a bit searching for grip, but soon found its way off the frame.

The truck has hill-descent control, which automatically takes care of throttle and brake application to ease you down off-road hills way steeper than you’d probably ever tackle in a truck like this.

Still, it’s good to know Palisade has this capability should you ever need it.

Palisade joins a large and ever-growing field of mid-sized SUVs. Choosing one that best fits your family’s needs and preferences will take some time.

One thing that might sway your decision is the estimates for resale value.

I’m not at all sure how they come up with these future value numbers for a vehicle that has barely hit the streets.

But ALG, the company that establishes lease rates for new cars, predicts that 48 month residuals — essentially, a measure of how much the car will be worth after four years — for Palisade will be 44 per cent (of the original price), second in this class only to the Toyota Highlander at 47 per cent.

Oddly enough, the virtually identical Kia Telluride is several points down on this scale at 38 per cent. I can’t think of any reason why this would be, other than country of origin. Palisade is built in Korea, Telluride in Georgia. The American Georgia, not the Russian one. Has North America’s collective opinion of its own assembly quality got to the point where they think even Korea is ahead on this criterion?

This retention value not only affects how much your vehicle might be worth if you bought it and are ready to trade it in or sell it; it also has a sometimes dramatic effect on the lease rate if you plan on going that route.

Pretty much right out of the box, Hyundai’s Palisade establishes itself as a serious player in this large and still-growing market segment.

Jim Kenzie is a Toronto-based writer and a freelance contributor for the Star.