2021 Chevrolet Corvette on road and track with Ron Fellows

If anyone knows Corvettes, it’s Ron Fellows. We made it onto the track at CTMP in early July and lapped the course for 45 minutes.

Years ago, my wife and latest son – he’s 24 now – stopped at a Starbucks. As we parked up the street, a 2010 Audi R8 Spider V10 stopped in front of the store. As the R8 is a snazzy car, even now, we hung around to see who was driving. My son figured it would be a player for the Maple Leafs; my wife was betting on an Argo. The door on the driver’s side popped open and . . .

. . . Three minutes later, a guy who had to be 90 and needed two canes to maintain his balance, managed to get out of the car and stand up straight. I am not exaggerating. It was painful to watch. “Only young guys should own a car like that,” said my son. “Only old guys can afford them,” said my wife.

Which is why I jumped at the chance to test the 2021 Mid-Engine Chevrolet Corvette Stingray when General Motors of Canada sent me an invitation. I mean, both my son and wife were wrong. I’m not a young guy and I don’t have to be old and rich to own this ‘Vette, which starts at $67,898 (the coupe) or $76,898 (the convertible). Can you believe it? The Audi that the really old guy was driving still goes for more than $100,000, used, and I can get a brand-new Stingray for a lot less than that.

Now, I have sympathy for that gentlemen taking three minutes (or so) to get out of the R8 Spider. Low-to-the-ground sports cars are wonderful when you’re a dashing 20-year-old but become challenging to enter and exit as you age.

For me, getting in the Corvette was a bit of a trick but I could still do it without too much difficulty. Getting out was something else. In the end, it’s easier to crawl out than to do anything else. Which is fine when you‘re in your driveway at home, but not so good in the parking lot at Loblaws.

When I got the car, I had this brilliant idea. I would have a “road” and “track” review. Two people would contribute. I would do the road part and my friend Ron Fellows would test it on the track he co-owns, Canadian Tire Motorsport Park. Mr. Fellows, a Member of the Order of Canada, was keen to help me out but the COVID lockdown prevented us from using the track at CTMP (which some people still call “Mosport.”) So, we had to wait.

Meantime, I drove the car around Mississauga, where I live, and out on the 401. and I have to say right off that it is a gem. It is, in a word, gorgeous to look at. The interior is equally attractive. The driver’s cockpit is close-knit and efficient, and you feel like you’re sitting in the cockpit of a fighter jet.

The 6.2-litre, normally aspirated small-block V8, which is mounted mid-ships (instead of up front, from where every Corvette ever made before now has been propelled), churns out 495 horsepower and 470 lb-ft of torque. An eight-speed automatic transmission can take all that from zero-to-160 kms in three seconds (Shhh! I’m on the road, not the track) and top out at more than 300 km/h. 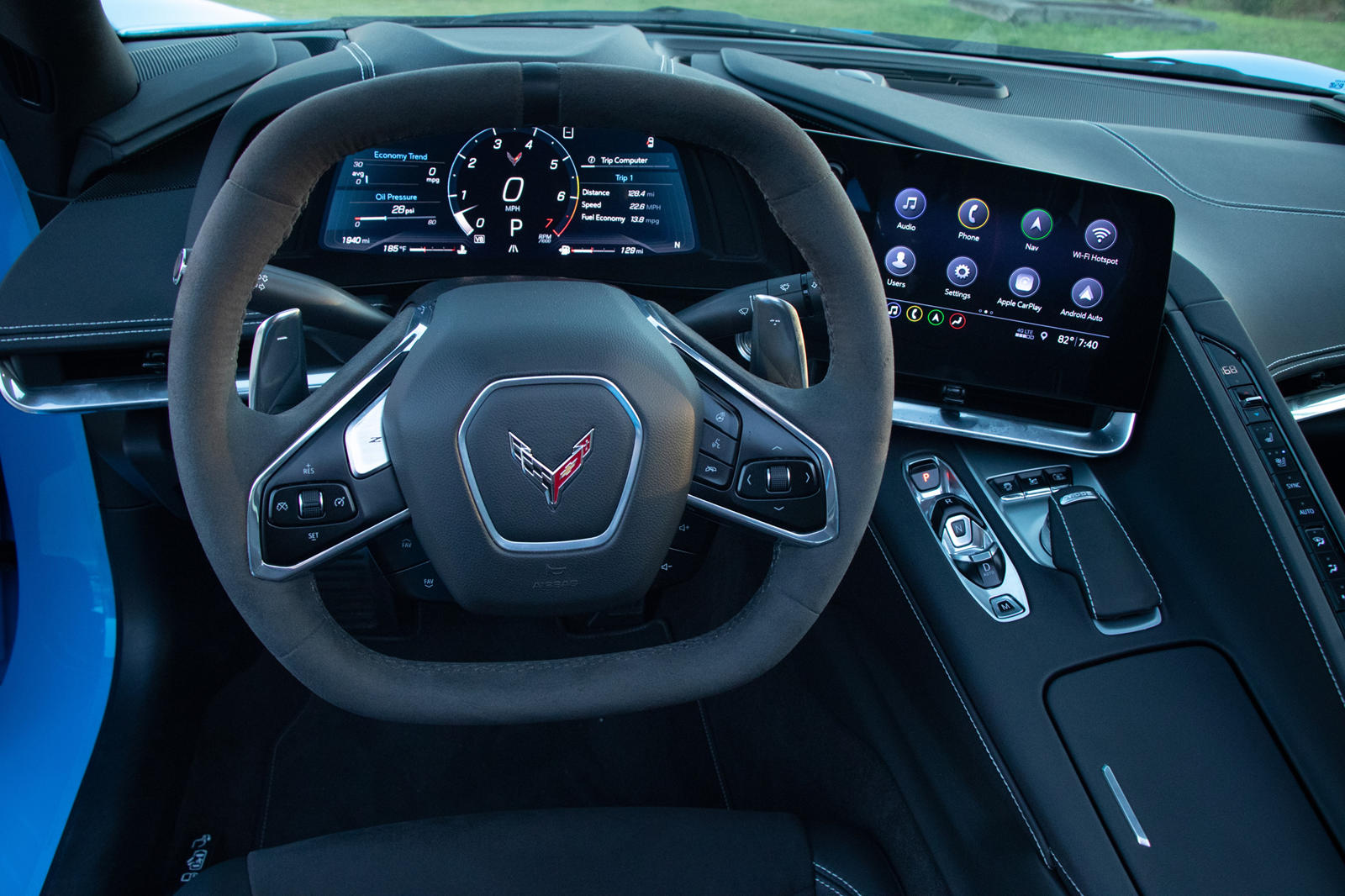 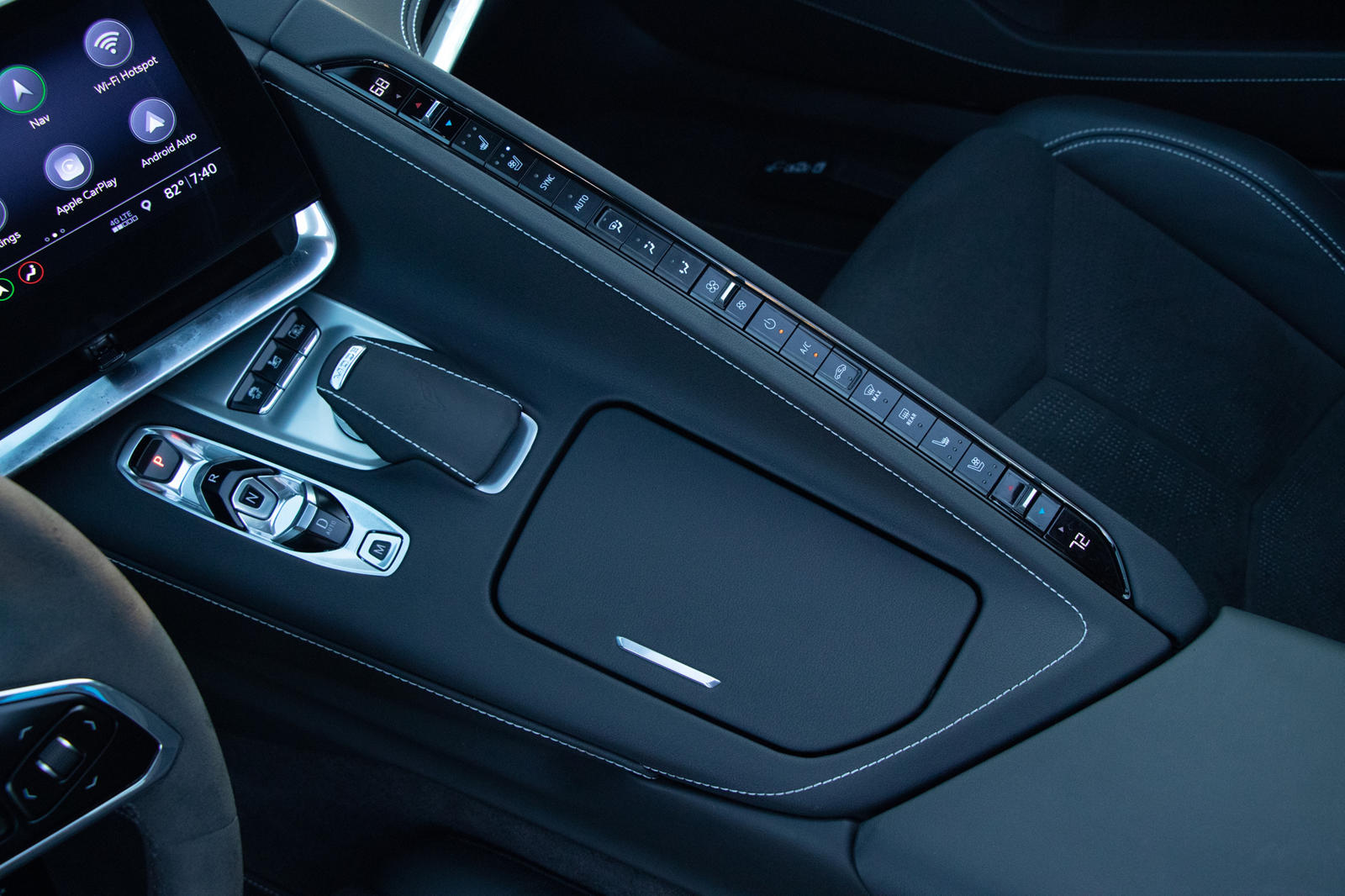 But enough from me. Ron Fellows drove Corvettes to victory in the 24 Hours of Daytona, class victories at the 24 Hours of Le Mans and 12 Hours of Sebring and so many other victories in so many other series that it’s tough to keep count. He is married and the father of three and lives in Mississauga with his wife Linda. They recently became the grandparents of twins. If anyone knows Corvettes, it’s Ron Fellows. We made it onto the track at CTMP in early July and lapped the course for 45 minutes. He loves the new car.

Tell me about the drive modes?

The drive modes, they’re pretty interesting. You’ve got four – the road one, sport and then there’s one called the Z mode, which you can customize to be specific to you. For today, we’ll go with the track mode.

Tell me about track settings?

Going to track settings on the C8 is super critical. When you take this car and you want to go to the track, you’ll get a whole bunch more performance by following the factory settings for race tracks. Before, there was a little bit of time to be gained by messing with camber and a little bit of toe where this one is alignment sensitive. It responds so well to the factory track settings and suddenly my understeer is fixed and overall, I have better balance. better tire wear. It responds well to little adjustments in tire pressure and to me that’s just a sign of a really good car. It’s well connected to the road.

Through a series of circumstances, you’ve always driven GM products. In the Player’s GM Challenge series, you drove a Camaro (Ron: which I still have; I have it running again; 1989 championship car, thank you very much) and I know you’ve had one-offs in things like Ferraris and so-on but mostly it’s been GM. So, I suggest you have a bias. But you have driven other cars and seen other cars, so how does this one really stack up?

All sports cars, generally, are very good. But it comes down to the value proposition, which has always been the case with the Corvette. This goes back to my time with the Ron Fellows Corvette school in Nevada, in which we started with the Corvette C6 and then the C7 and now the C8 (this one). It’s an incredible value proposition for its performance capabilities. That’s always been the case. They’ve all performed way above their price range.

I think it’s the best. Obviously, it’s a departure from over 60 years of front engines. But it’s been in the works for a while (as a mid-engine). They’ve maxed out everything they could possibly do with the front-engine. Based on the amount of time that I myself have spent in the C6 and C7, the C7 was an incredible performance jump from the C6. The overall performance of the C7 was awesome. Really good handling. I couldn’t believe the quality of the forward traction. That’s a credit to the engineering it got. About 51 per cent rear weight. That’s pretty sporty considering the engine is in the front. The good news is this thing is awesome. They’re just getting started, in my opinion.

What do you mean by that?

Which means the performance evolution. When you look from generation to generation, each one was that much better. One of the things I’ve noticed about the mid-engine configuration is how you can actually carry speed. Because the balance of the car with the mid-engine is overall better, you can carry more entry speed into a corner. The platform is just that much more stable with the mid-engine.

NM: Ron, we’re going at a fair clip and you’re doing a lot of talking. Do you want to concentrate a bit more?

RF: I haven’t forgotten how to drive, you know. . . By the way, the paddle shifts with this are so quick and positive and they allow you to do some different things on track. You watch a Formula One race and you see those guys down-shifting half-way through a corner and what that does is help them turn.

This is essentially a race car that you and I can drive on the road, isn’t it?

Well, the Corvettes have always performed really well on the track but they also cater to couples who go on road trips together. For a mid-engine car, there’s lots more luggage space in the C8 than normal. That was part of the criteria. This one also is the most comfortable daily drivers that they’ve made. My wife Linda would tell you that.

We drove from Detroit to my racing school in Nevada with 10 of them. When she took her turn driving, I couldn’t get her out of the seat. The things she noticed were how responsive the steering was, the level of confidence in being 16 inches further forward and the shape of the windshield in terms of visibility.

She just absolutely loved it. The seating position – there’s more room for taller people and the quality of the seating is first rate. We went 2,300 miles. It was amazing. The trick to longevity in performance is the break-in. Because they had a dealer event coming up, the fastest way through the break-in period was to drive a bunch of them from Detroit to Nevada. The only problem we had was when we’d stop for gas and there were 10 of them. People were coming over and asking questions and taking pictures and that kind of held us up.

What do you think about electrification?

I don’t know what direction they’re going to take (electrification). My personal opinion is some form of alternative fuel is a possibility. I guess, to me, hybrids are the future. A combination of combustion and battery power. You’re not reliant on one or the other.

Overall, the impressions for me, what they’ve done to the ergonomics of the cockpit for the driver is incredible. There’s great ease of access. I absolutely love it. Ron wants one. Ron will have to buy one like everyone else. But Ron will have one, one of these days.