Recently, members of the Automobile Journalists Association of Canada (AJAC) descended on Canadian Tire Motorsport Park north of Bowmanville, Ontario to evaluate and vote on entries in the Canadian Car of the Year program.

The gathering, known as TestFest, is a two-day test-drive event that brings together a wide variety of vehicles competing not only in their respective categories, but also for the top two awards – Canadian Car and Utility Vehicle of the Year.

This year 51 vehicles were entered across 12 categories that cover a broad range of segments from pick-ups to large cars, small cars and premium electric vehicles (EV) to name a few. The evaluations took place on CTMP’s Driver Development Track (DDT), along with an off-road course for utility vehicles, local roads in and around the track, and an off-road course designed especially for pick-ups in the competition.

Note: The Ford Explorer is also entered in this category but was unavailable for evaluation during the TestFest program. 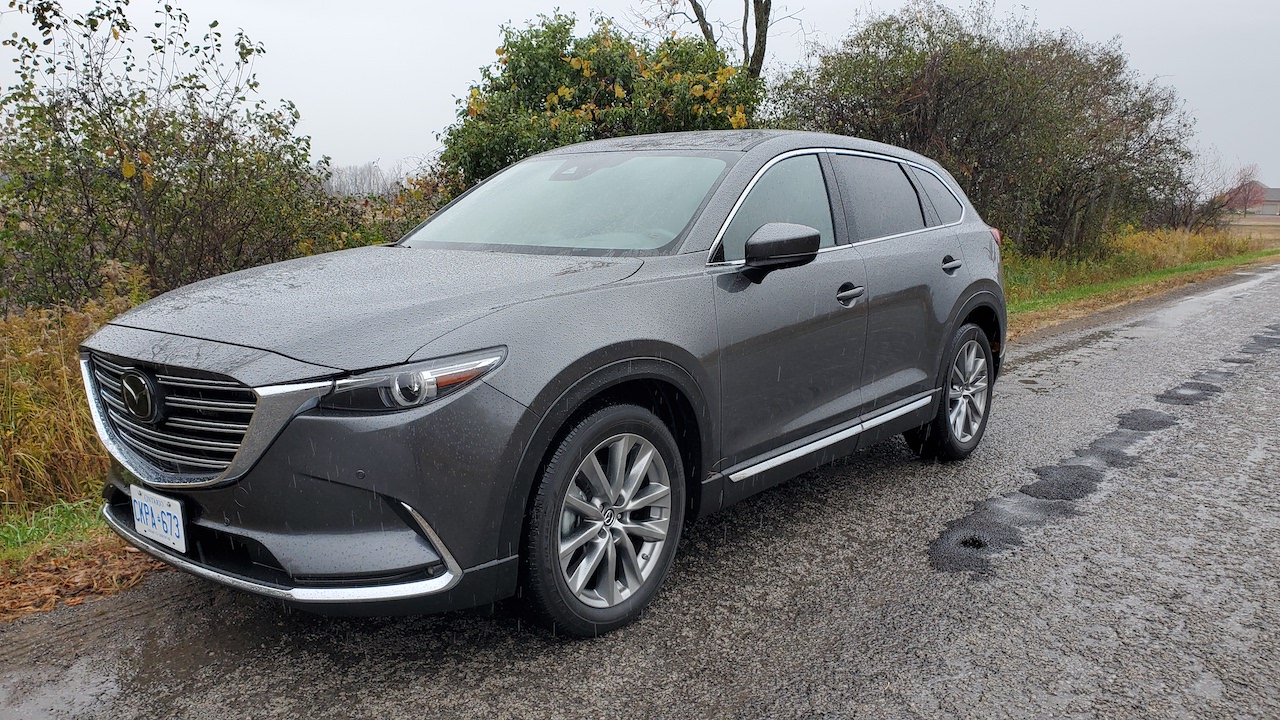 As I said to one of my colleagues shortly after exiting it, the Mazda CX-9 is quietly impressive. It really does everything well. It’s handsomely styled, has acres of interior space and is beautifully finished, especially in the upper trims such as the range-topping Signature tester I drove. It’s no slouch on the road either. The 2.5-litre turbocharged 4-cylinder engine (227 hp / 310 lb-ft.) hustles this 7-seater along hastily, and the console-mounted drive mode toggle sharpens throttle response even further when set to sport. Beyond performance what I really appreciate about the CX-9 is the care Mazda has used to craft a cabin environment that is really first rate, from the leathers used in the seating areas, to the Rosewood console and door trim inserts. All this for $51,500 before taxes? Feels like a deal to me. 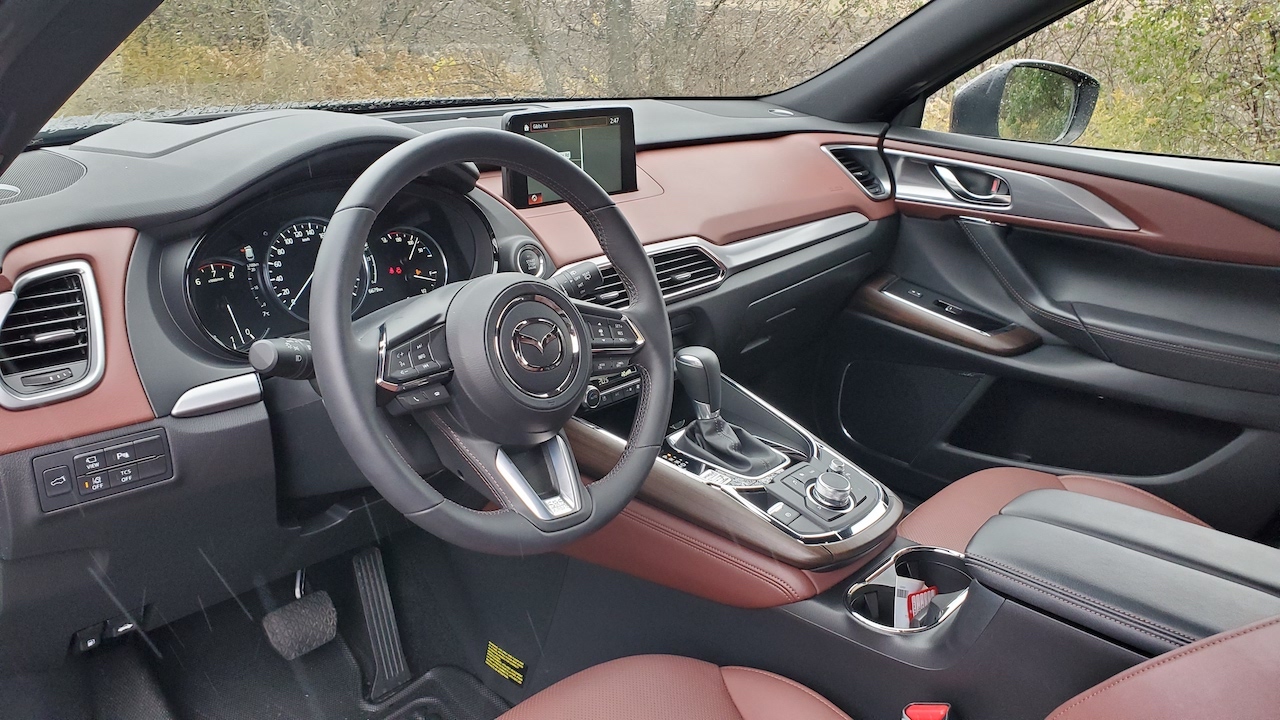 So why didn’t the CX-9 win? First off, all entrants in this category were very tightly bunched on my ballot. There really are no bad vehicles here – all are worthy. Personally, I think the CX-9 shows its age (it was all-new in 2016) if you look closely. The small, low-res infotainment screen really looks out of place in a vehicle in this price range, and while the instrument cluster is completely functional, it lacks the cutting-edge display and customization tech that other vehicles in this space offer. Also, and this is just personal preference, I like a big, burly V6 in this segment, which the CX-9 doesn’t offer. Not much, I realize, but it’s enough to bump this fine Mazda down to third place. 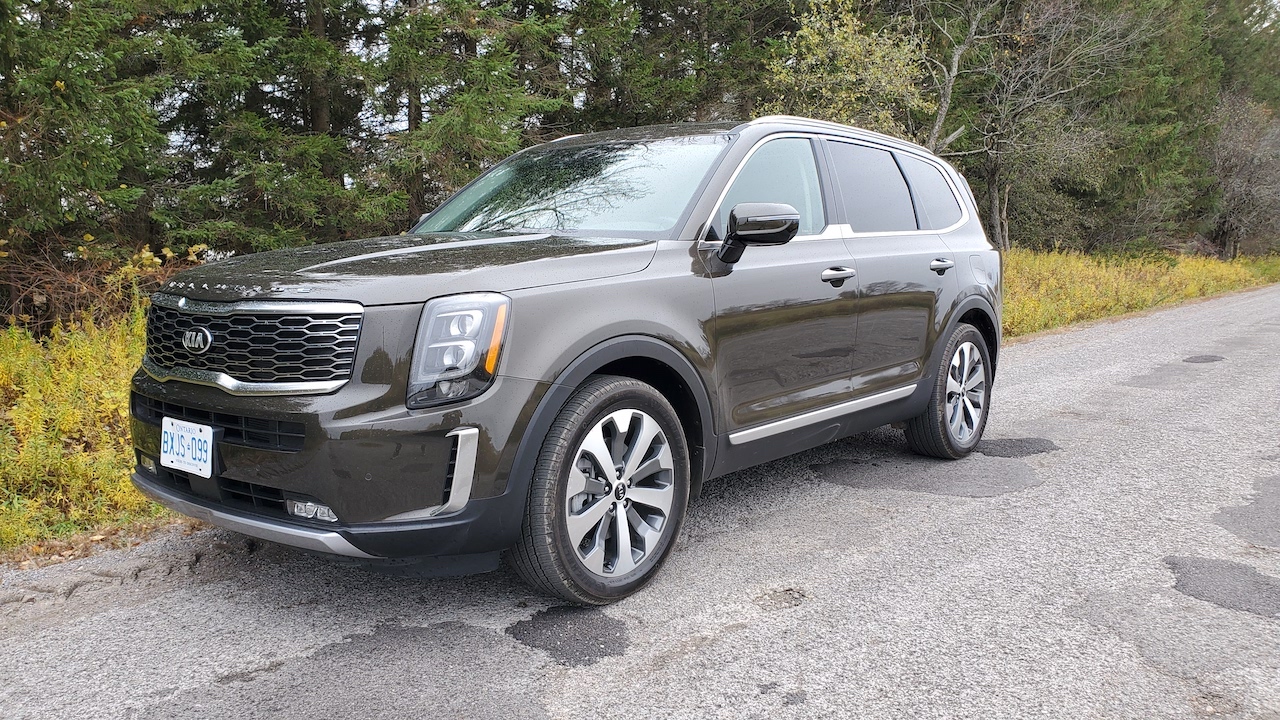 Kia’s foray into the three-row, seven / eight-seat SUV game really impresses. The most rugged looking of the three in this category, the Telluride’s character is befitting of the Rocky Mountain town in Colorado for which it’s named. I really like its squarish proportions, its broad face and blocky shapes that litter its exterior. The Telluride’s interior might not feel quite as luxurious as others in this segment, but it’s still well-appointed and comfortable. The interesting patterns on the leather seats in my SX Limited tester offer a pleasing visual cue, the metallic buttons for basic HVAC and infotainment functions look and feel great to use and the big 10.25-inch infotainment display is buttery smooth with pin-sharp graphics and bright colours. 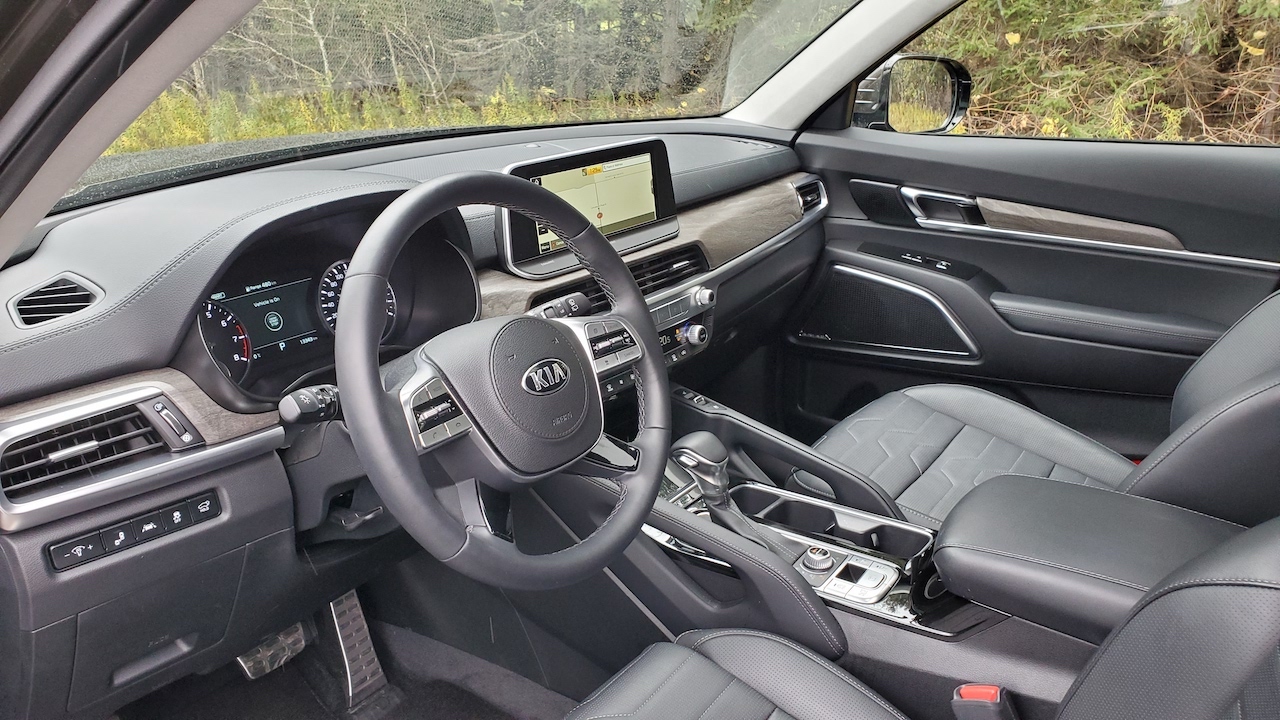 On the road, the Telluride really hauls and the low-end grunt that comes from its big 3.8-L V6 engine (291 hp / 262 lb-ft.) really delivers on that front. Throttle response from the meaty V6 is impressive for a big, boxy SUV and it works beautifully with the 8-speed autobox. Available drive modes – four on-road, three off-road – allows the driver to tailor the Telluride’s performance to their preferred driving style, and while it’s not a Jeep, it handled the light off-roading I put it through during my test with ease.

Any minuses? Not many, in my view. As mentioned, the interior doesn’t feel as overtly luxurious as the other two in this segment, which is a bit of a negative, and it’s $56,190 as tested price before taxes was the highest in the group. In other years, the Telluride would probably take top prize, but this year it finishes a close second. 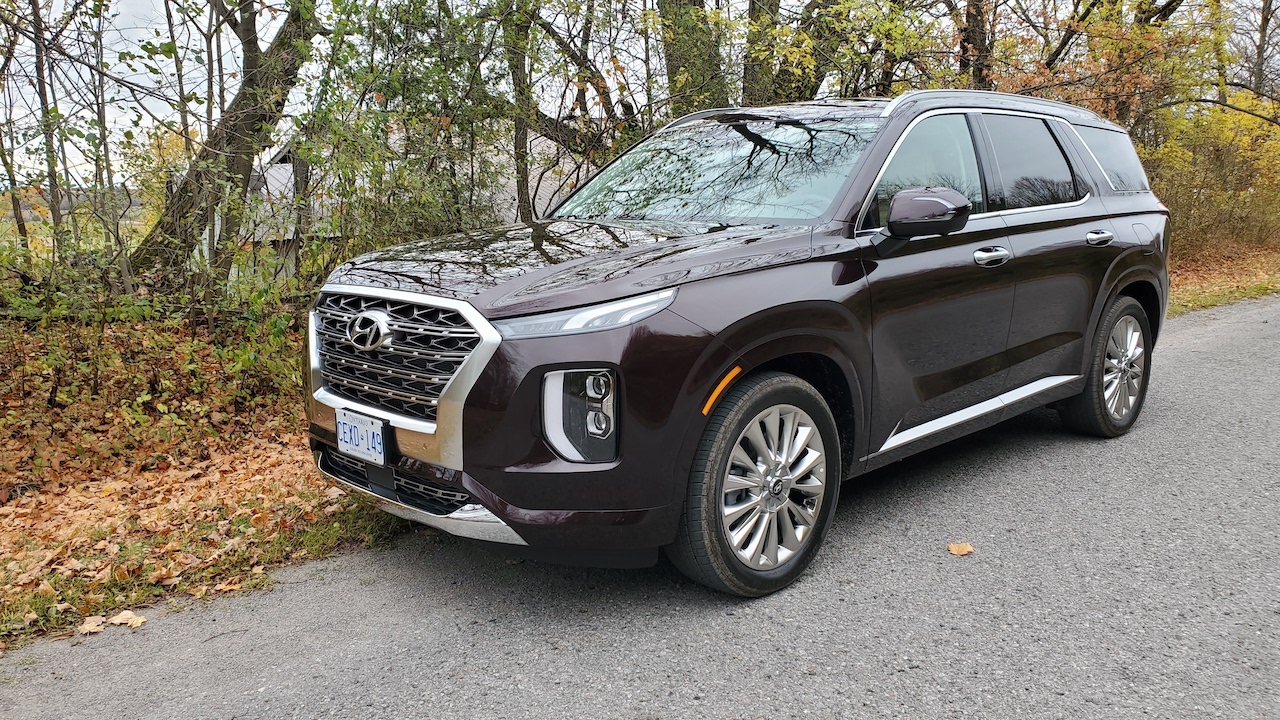 The Hyundai Palisade shares a basic architecture, wheelbase and powertrain with the Telluride, but carries with it a very different design ethic and cabin feel. Whereas the Telluride is rugged, with a more brutal, blocky design, the Palisade is decidedly more upmarket, with a large chrome cascading grille, separated composite LED headlights and (slightly) more rakish profile.

Inside, the Ultimate tester I drove has loads of luxury detail, such as a 10.25-inch navigation touchscreen and a 12.3-inch fully digital TFT instrument cluster. One feature that really caught my eye is the class-exclusive Blind View Monitor which provides a side-view of the Palisade on the instrument cluster screen when either turn signal is engaged. Brilliant, and it’s standard on all models above the base Essential trim. 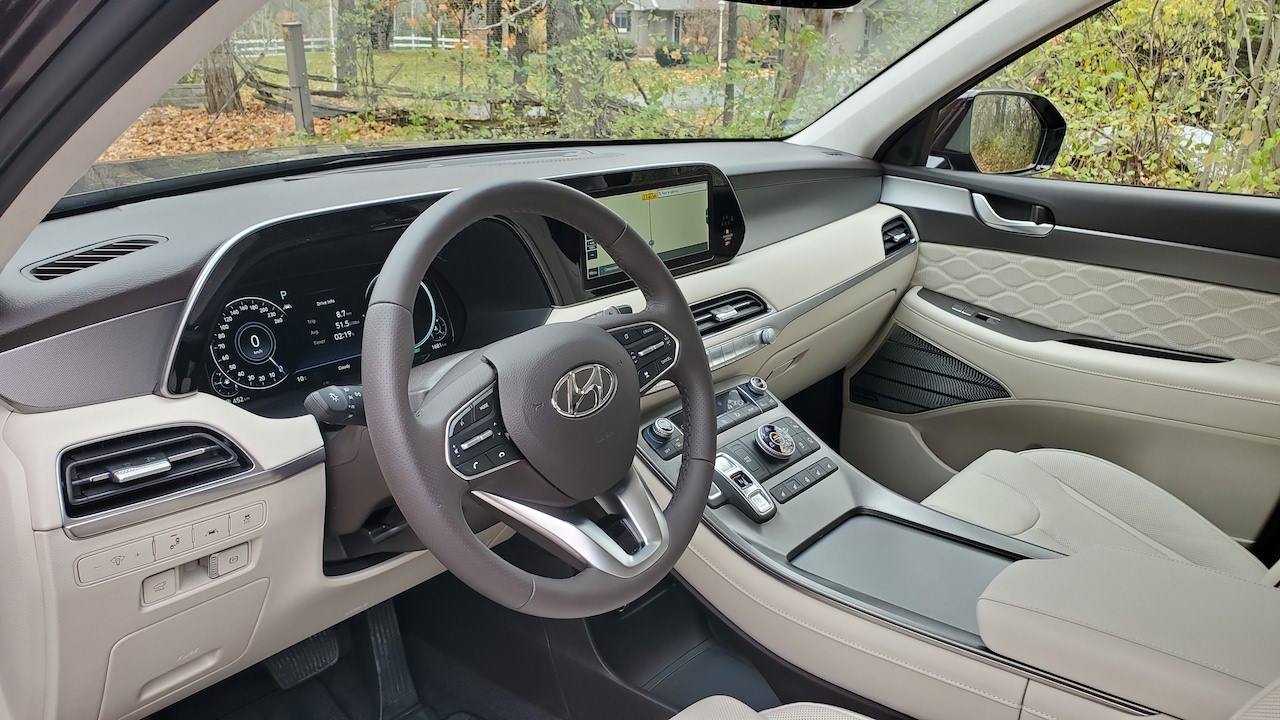 Elsewhere, the Palisade’s spacious and well-finished environs feature quilted Nappa leather, seven USB ports and use of smart technology like Safe Exit Assist, which warns passengers of oncoming traffic when exiting the vehicle, and Rear Occupant Alert, which uses ultrasonic sensors to detect movement of children and pets. Both features send audible alerts to the cluster display, and the latter will even honk the horn and send an alert to the driver’s smartphone. Very impressive.

I’ll finish by saying the Palisade performs admirably on road and off, as it utilizes the same 3.8L V6 / 8-speed automatic powertrain found in the Telluride. Power delivery is smooth and linear and the V6 is quite responsive when called upon. Bottom line, the Palisade delivers a lot of value for its $53,999 as tested price. It’s a vehicle that is both finely crafted and loaded with the sort of useful technology and advanced design consumers have come to expect in this segment. It was close, but the Palisade is a worthy winner in the large utility category.