Japanese tinkerer and engineer Soichiro Honda established his namesake company in 1948 and steered its evolution from a motorized bicycle maker to a global manufacturer of motorcycles and automobiles. And let’s not forget lawnmowers.

His Type D motorcycle featured a 98-cc two-stroke engine making all of three horsepower. Regardless, it was the first of many Honda engines that would impress buyers with its lofty redline and can’t-kill-it durability.

Honda Motorcycles opened its first U.S. dealership in 1959, yet it took only five years for the upstart to dominate the market. Honda released its first automobile, the microscopic T360 pickup truck, followed closely by the S550 roadster with its 44-hp DOHC 0.5-litre engine, in Japan in 1965.

Honda’s little company grew by leaps and bounds after the release of the Civic in 1973, though its expansion was stymied in the early 1990s when sport utilities began to catch on. Honda had nothing to show the buying public until it rolled out its CR-V compact crossover in 1996. The rest, as they say, is history.

The fifth-generation CR-V formally launched in late 2016 as a 2017 model. Despite its chunky profile, the crossover utility continues to be based on the bones of the humble Civic. And as is often the case with generational change, the new one was cast bigger than the old one. In this instance, the wheelbase grew by 4 centimetres, while overall length and width is up by 3 cm.

The CR-V features a variable-ratio electrically assisted power-steering system that delivers a quicker response and a more rewarding drive. A thoroughly massaged suspension does wonders to reduce body roll in corners without compromising the compliant ride, and there’s an extra 4 cm of ground clearance for those who like to believe a crossover can actually be taken off the beaten trail. 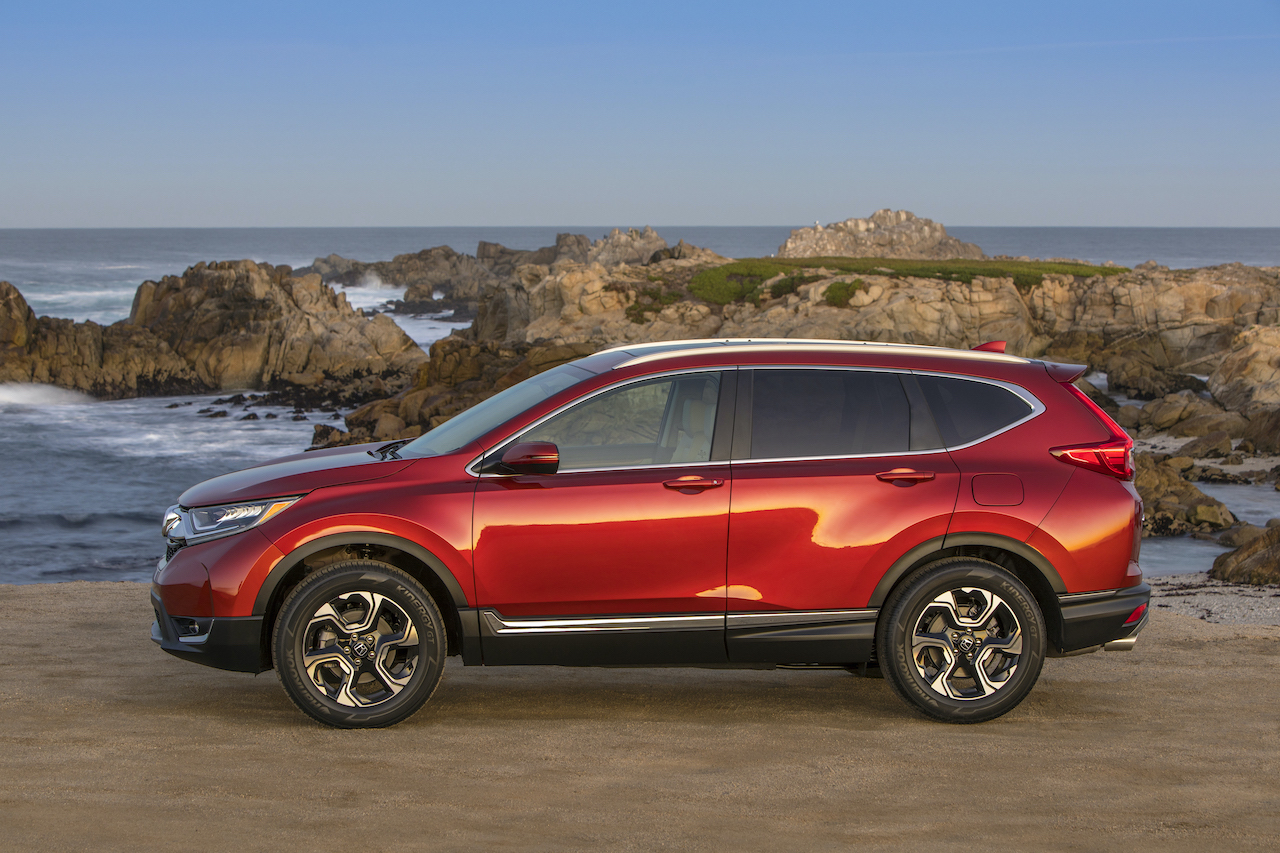 Inside, the CR-V followed the latest Civic’s lead with a contemporary sculpted dash, an enhanced instrument panel and a large touchscreen that incorporated a volume knob for the digitally challenged. The CR-V has always been a spacious crossover, and the latest version offers even more rear legroom along with an exceptional amount of cargo room that positions this compact as a bona fide alternative to midsize SUVs.

“It feels small when driving due to its ease of maneuvering and parking, yet it is large inside,” remarked an owner of a 2017 CR-V online. “The nice steering of this vehicle sets it apart a bit from the Toyota RAV4 and Subaru Outback, the other two vehicles I shopped.”

What buyers noticed right off the top is the inherent value of the base LX model. Standard features include 17-inch alloy wheels, LED running lights, an electronic parking brake, automatic climate control, pushbutton ignition and a four-speaker audio system with Bluetooth connectivity. The CR-V has just about the best crash-test ratings possible, and the U.S.-based Insurance Institute for Highway Safety named it a Top Safety Pick.

One feature unique to the Canadian market is the CR-V’s adoption of the Civic’s 1.5-L turbocharged four-cylinder engine in the base model (American LX buyers got the old, naturally aspirated 2.4-L four banger that’s been around for ages). It’s the only engine in the CR-V lineup and by all accounts it’s more than up to the task.

The turbo engine has a slightly lower compression ratio (10.3:1) than in the Civic, but higher boost pressure, making 190 horsepower and 179 lb-ft of torque. It makes 5 more horses but, surprisingly, 2 lb-ft less torque than the former 2.4-L produced. The wee turbo is very happy with regular-grade fuel and premium is not even recommended. 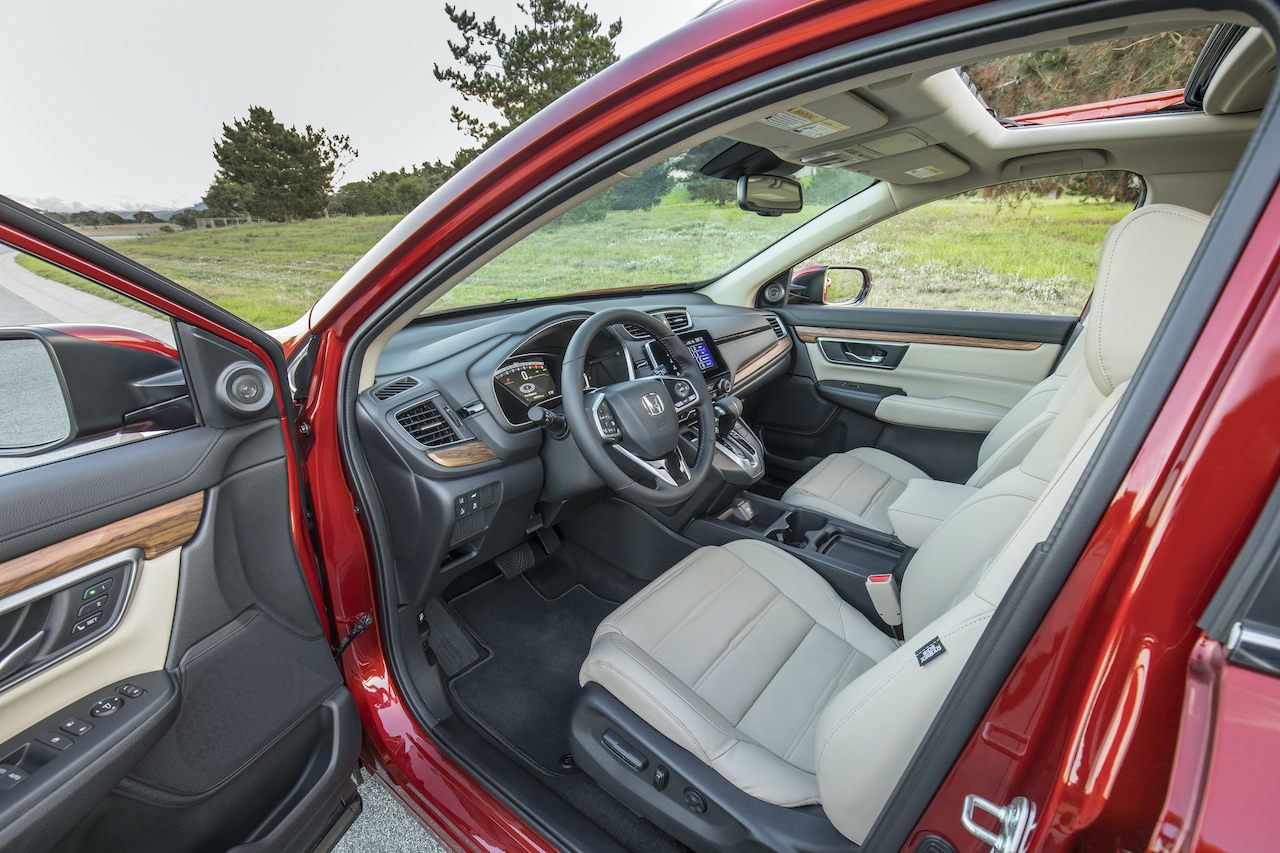 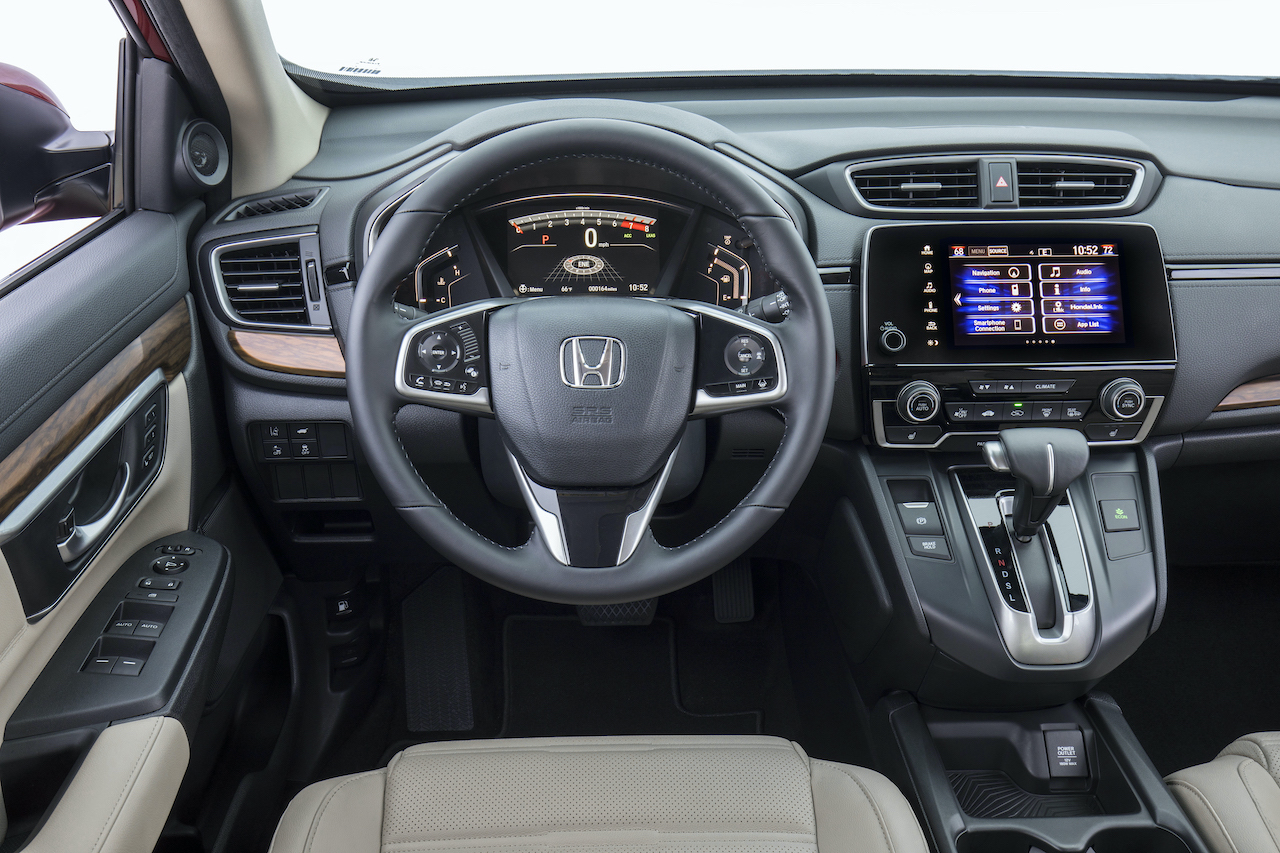 The lone engine works through a lone transmission choice, too. The continuously variable automatic (CVT) of Honda’s own design simulates shifts at the appropriate times, rendering the rubber-band sensation largely absent. Tradition dictates that the gear selector pokes out of the dashboard, rather than down low in the centre console. The optional all-wheel-drive system is updated with a smart, variable system capable of distributing torque fore or aft based on a number of inputs.

The CR-V sold so well right out of the box that Honda didn’t see a need to revise it until the 2020 model year. All 2020 CR-Vs got a bolder-looking grille, tinted taillights and dark chrome trim. EX and EX-L models received new 18-inch wheels, while the Touring now comes with larger 19-inch wheels.

The cabin is refreshed with an improved centre console, while the suite of driver-assist features – automated emergency braking, lane-departure warning, adaptive cruise control, blind-spot monitoring and lane-keeping assist – migrated to the base LX for the first time. Interestingly, Canadians can’t buy the 2020 CR-V Hybrid that’s sold in the U.S., which uses a naturally aspirated Atkinson-cycle 2.0-L four-cylinder engine and two electric motors.

The CR-V takes a zippy 7.4 seconds to reach 97 km/h from a standstill – the quickest of the compact crossover class – but it doesn’t always feel like it, partly due to the imprecise action of the CVT transmission. Devoid of weighty all-wheel-drive componentry (the CR-V is already lighter than many in its class), the front-drive LX is slightly quicker off the mark. 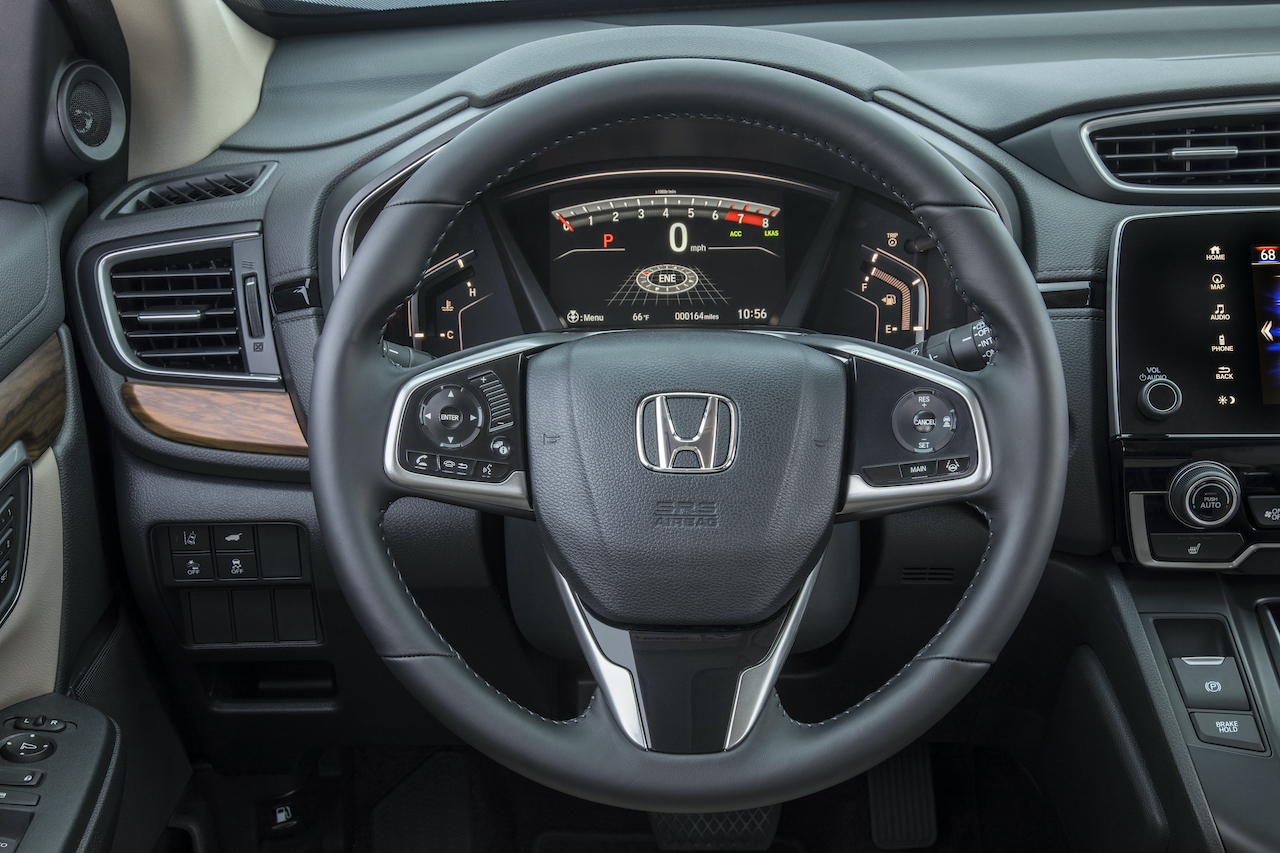 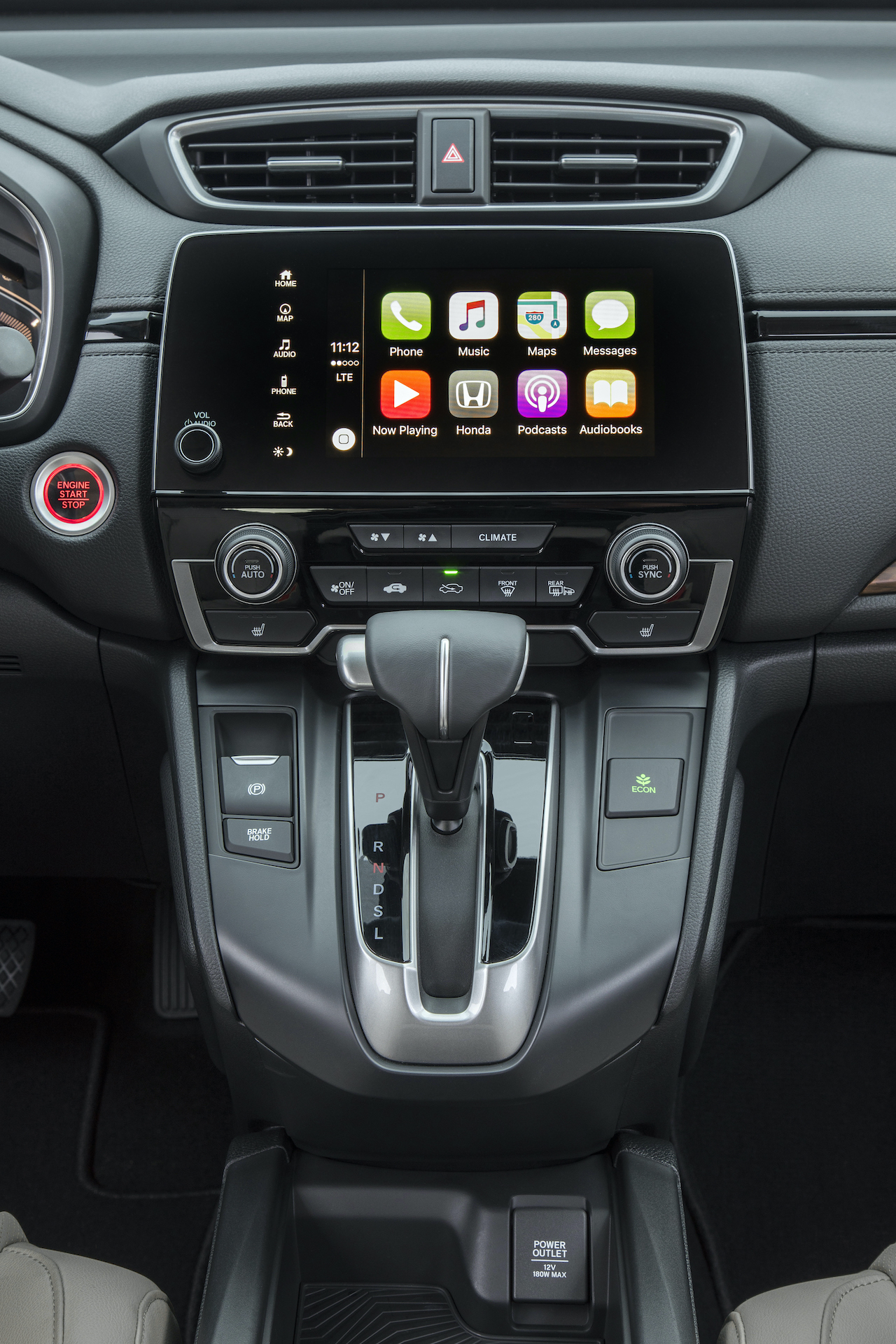 As noted earlier, this crossover’s well-sorted suspension makes the CR-V a confident, capable road machine with well-damped body motions, strong brakes and linear, direct steering. Honda engineers did their best to make it quieter than its predecessor, but it’s still considered noisier than some of its competitors. At least part of the blame can be attributed to the CR-V’s Hankook Kinergy GT tires, say some owners, who characterize the tires as rumbly.

Where the CR-V really shines, like so many Hondas, is at the gas pump. The turbo engine spins madly to keep the crossover ahead of traffic, yet it sips fuel with the best of them. Owners are very happy with the fuel consumption, which averages about 8.1 litres/100 km (35 mpg) in mixed city/highway driving. It’s a good thing, too, given the small fuel tank, which limits the range.

CR-V drivers adore its Mighty Mouse turbo heart, the responsive handling and generous cabin and cargo space, moulded inside an aggressive SUV shape. It appears to do everything well, helping to maintain the CR-V’s near-dominance in the segment. Owner dislikes include some highway noise and the frustrating infotainment system with its slow and inelegant touchscreen responses. On the reliability front, the CR-V has long been praiseworthy – yet the newest examples have been dogged by two perplexing issues.

The 2017-2018 CR-Vs (and 2016-2018 Civics) are subject to a Honda “product update” intended to address oil dilution problems in the 1.5-L turbocharged engine, after some owners noticed high oil levels on the dipstick caused by fuel mixing with the engine oil. Affected owners will receive new software and dealers will change the oil and in some cases the air conditioning control units. The modifications allow engines to warm up faster and improve fuel combustion in cold weather to prevent unburned gas from diluting the oil.

The problem was first observed by Honda buyers in China, who had complained of illuminated engine/oil warning lights and damaged engines caused by fuel contaminating the oil, a problem Honda blamed on short drives made in extremely cold weather. Canadian CR-V and Civic owners received warranty extensions on selected engine components for up to six years from the original date of purchase with no mileage limit.

The second issue is weak cabin heating, which is reliant on waste heat produced by the engine. Reportedly, the 1.5-L turbo four-cylinder is so efficient, it has trouble producing enough heat to clear the windshield and warm the interior on a frigid winter morning. This was corroborated by the Automobile Protection Association, which notes Quebec owners who had received the oil-dilution service reported that little can be done to address the weak heater performance. 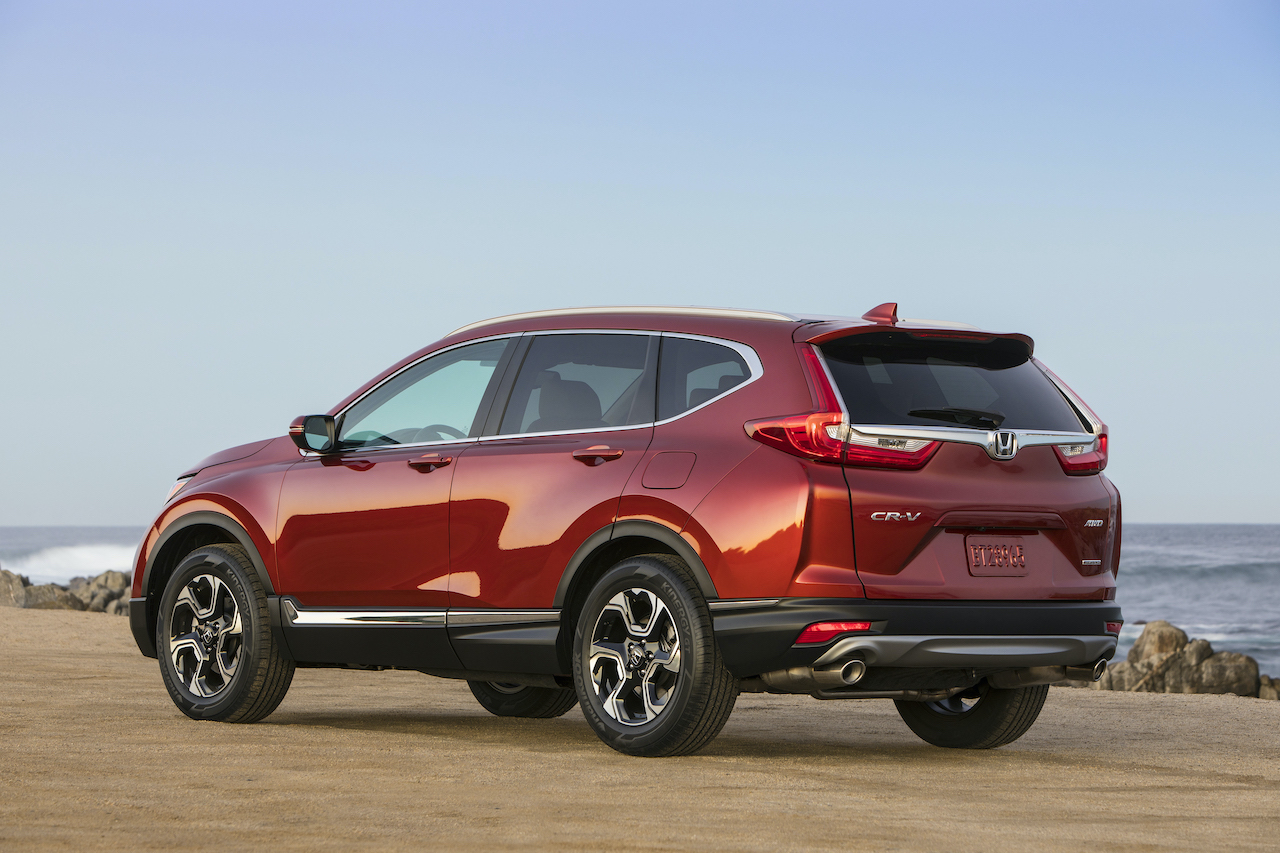 Apparently, both problems are less pronounced after the Honda service is performed, and is largely non-existent in 2019 and newer models. Other mechanical issues include some annoying infotainment glitches, including screens that brighten and dim on their own and dropped phone calls, as well as short-lived batteries and a collision avoidance system that may issue false warnings.

Despite the setbacks, the CR-V acquits itself nicely – thanks to a winning combination of good design and high value content – and continues to win a sizable slice of the compact crossover segment and for good reason: it is assembled in Alliston, Ontario, making it a local hero of sorts. 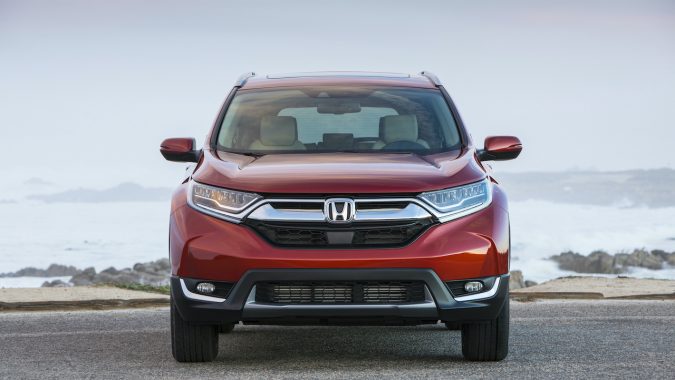 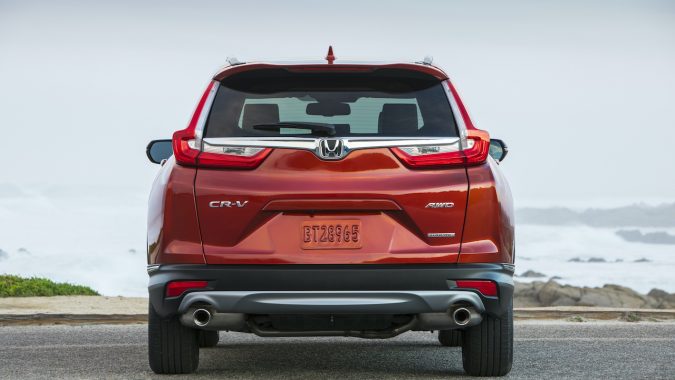 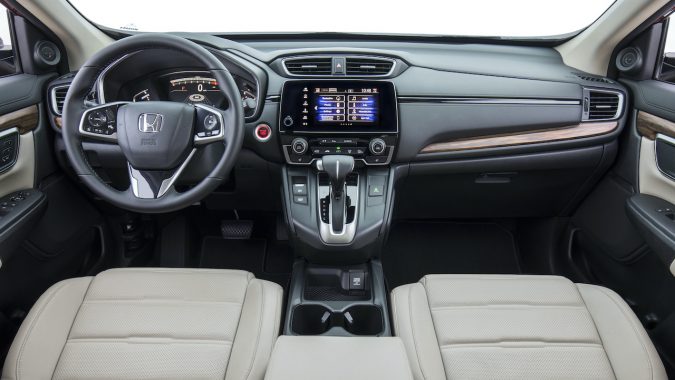 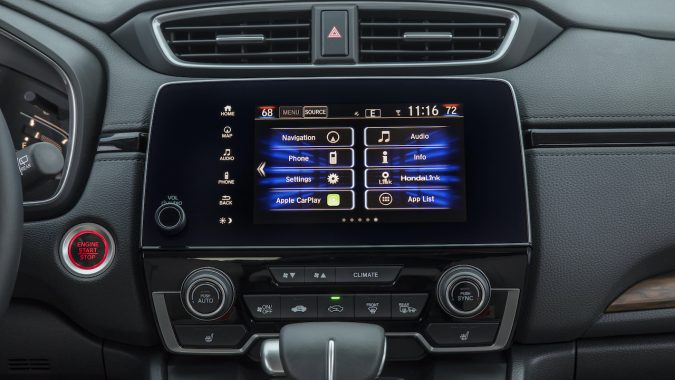 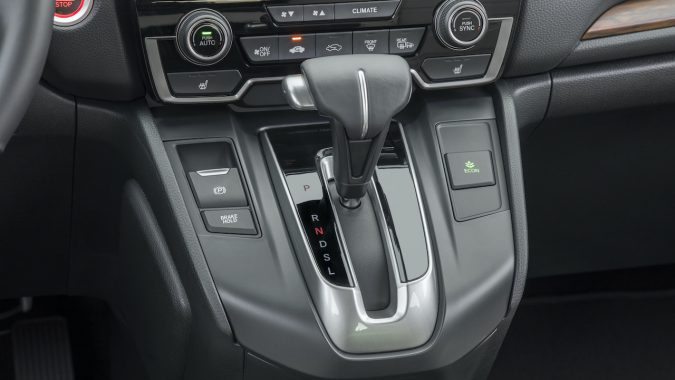 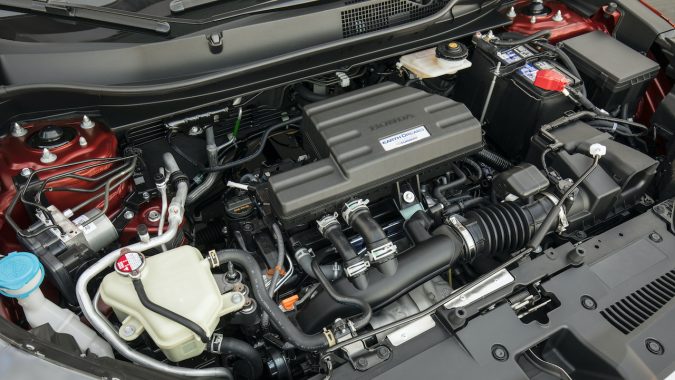 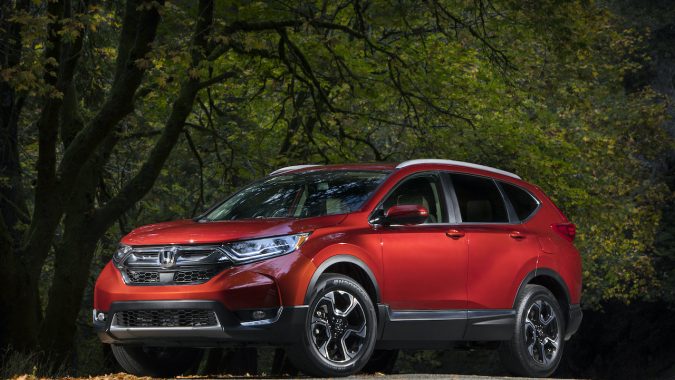 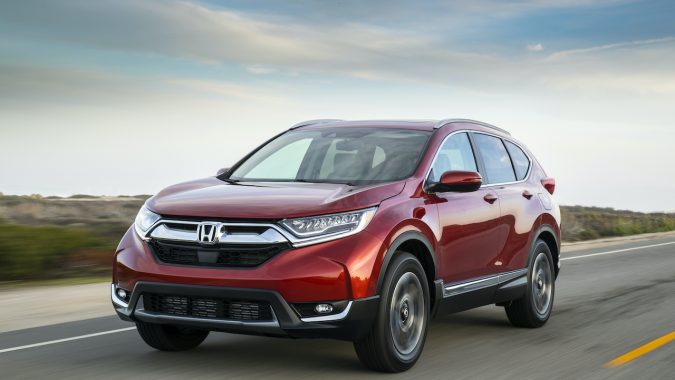