I was surprised at the approval rate of this eye-catching Go Mango colour, inspiring waves and smiles from other drivers, even an unexpected thumbs-up from an Audi owner.

The deja vu was coming through.

Sliding into the driver’s seat of the 2016 Dodge Challenger SRT brought to mind the lineup launch two years ago, when the latest modifications to the third generation Challenger were first revealed.

New models, new technologies and new tweaks were unveiled at the time, highlighting a muscle car lineup ranging from SXT entry models to the newest Hellcat hotrod, with prices starting at just over $30K and bumping up to more than $75K.

There are Scat Packs, premium groups, options and accessories galore to personalize those choices even further. 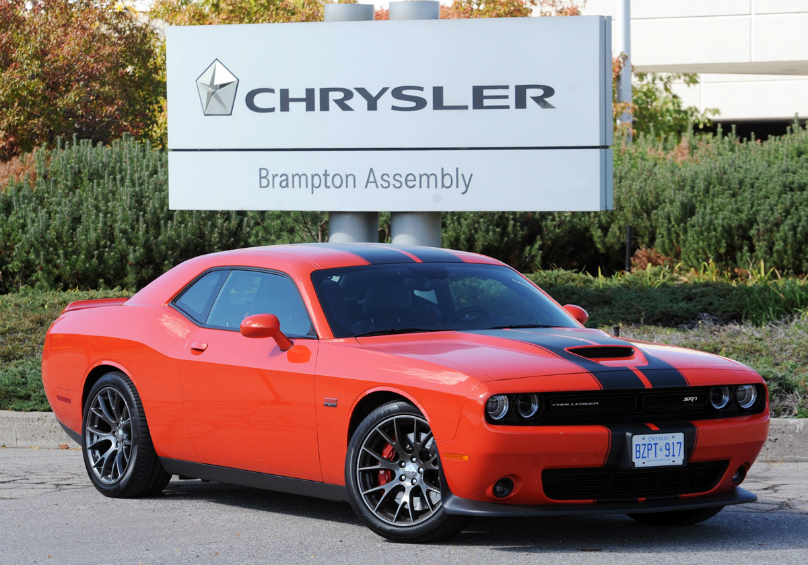 The 2016 Dodge Challenger SRT 392, a 485 hp made-in-Canada muscle car returns to its roots at the Brampton Assembly Plant.

I don’t really remember too many specifics revealed during that launch two years ago because they all seemed to blur as we ran through slalom courses, dragstrip acceleration bursts and circuit lapping at Portland International Raceway.

So now, it was time to check that sense of deja vu at the door because this wasn’t a racetrack session.

This was a very practical test in town, focusing on just one flavour of Dodge Challenger.

Let’s start with a walk-around, admiring the lines and curves of a car that is arguably most faithful to its muscle car heritage, with a design that pays tribute to the storied 1971 Challenger.

Founded on a platform shared with the Charger and Chrysler 300, the Challenger is the biggest “pony car”, significantly larger than Mustang and Camaro, a fact that does impact handling comparisons. 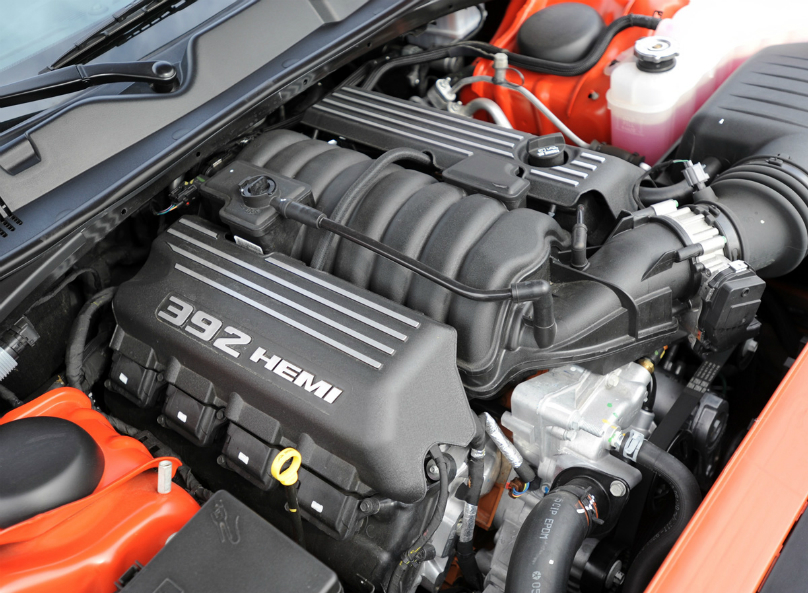 On the other hand, there is a loyal constituency that embraces its plus-sized dimensions and the benefits of a truly useable back seat and suitcase-swallowing trunk.

Our tester stands out in a exuberant shade of Go Mango, a shade initially reserved for Hellcat models but recently released across the Challenger and Charger lineups.

I was surprised at the approval rate of this eye-catching orangish colour, inspiring waves and smiles from other drivers, even an unexpected thumbs-up from an Audi owner, for Pete’s sake.

A variety of racing stripe styles are available and the wide stripe running the length of our tester leads the eye down a longish, power-bulged and scooped hood that seems to swing through the corners like a speedboat prow, carving curves smoothly along the road.

This is the SRT 392, picked from the upper echelon of trim levels, a penultimate performer just one slot below the halo-car Hellcat. Which might lead some to point it out as a second-best alternative, a purchase reduced to “hey, guess you couldn’t afford a Hellcat, huh?” 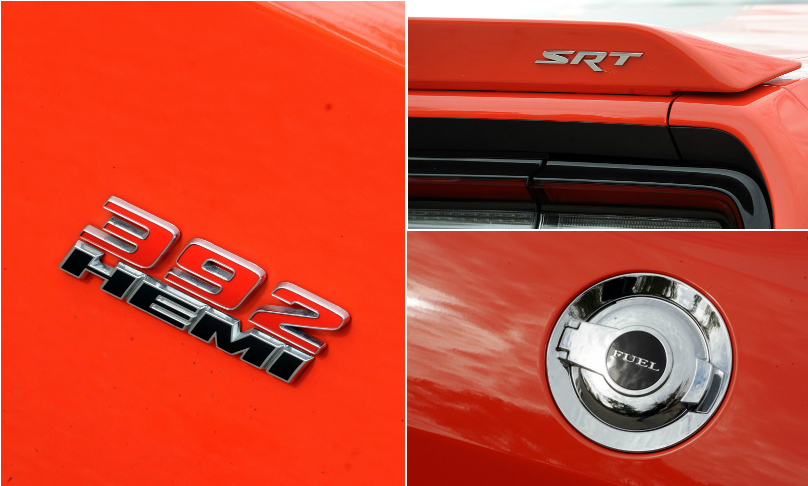 But the Challenger lineup’s graduated trim levels allow customers to mix and match their needs and desires.

And the SRT choice ($57,495), saves a significant chunk of change compared to the Hellcat ($76,445), perfect for performance fans who need to balance a budget against brute force.

And what are you gonna do with 707 hp anyway?

Frankly, even the SRT’s 485 hp and 475 lb/ft of torque feels like more than enough, although the visceral thrill of the sound and feel of that power makes for a pure adrenaline rush, from the growling moan of initial ignition to the roaring acceleration g-forces, stuffing you into the seat back.

The optional TREMEC TR-6060 six-speed manual gearbox just adds to the ticking time bomb sense of potential mayhem, the power pulsing up your left leg as you hold down the strong twin-disc clutch.

Like any predator in the automotive food chain, the SRT does not respect weakness, but with a firm hand (and firm clutch leg), you soon tame the power shifting rhythm. 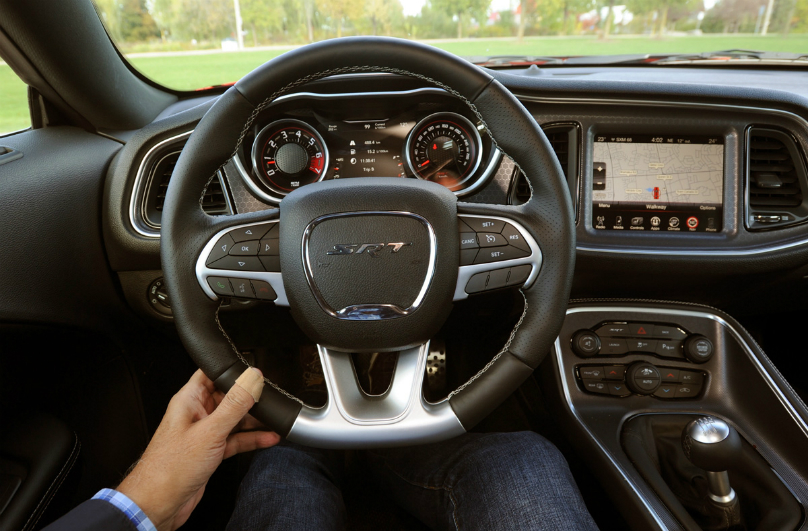 The clutch take-up is forgiving and, combined with the Hemi’s massive torque, prevents, any miscues or embarrassing stalls.

In town, it’s easy enough to allow the first-to-fourth skip shift to come into play or skip shifts yourself and even swan around the burbs in sixth gear, basically idling at 1,000 rpm. In fact, in top gear, the revs barely budge past the 2,000 rpm mark until you’re pushing well past 130 km/h or so.

Yes, there is a fuel pump penalty to pay for all this V8 fun, even with the FuelSaver Multi-Displacement System and a prudent reigning in of the hormones. 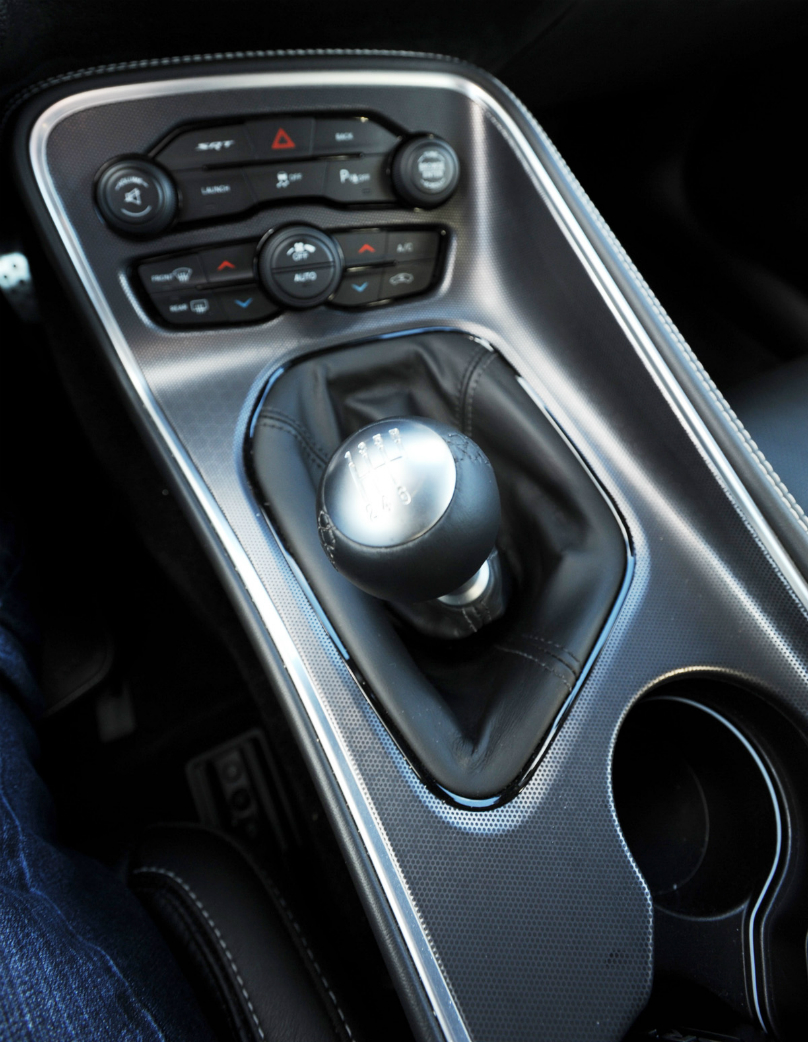 There are rumours of a future lighter and smaller Challenger, based (gulp!) on the Alfa Romeo rear-wheel-drive Giulia platform.

But, for the near future, look for a few other minor model changes for 2017, further enhancing a Challenger lineup for performance die-hards who are happily purchasing retro nostalgia in the shape of a very modern, made-in-Canada muscle car. 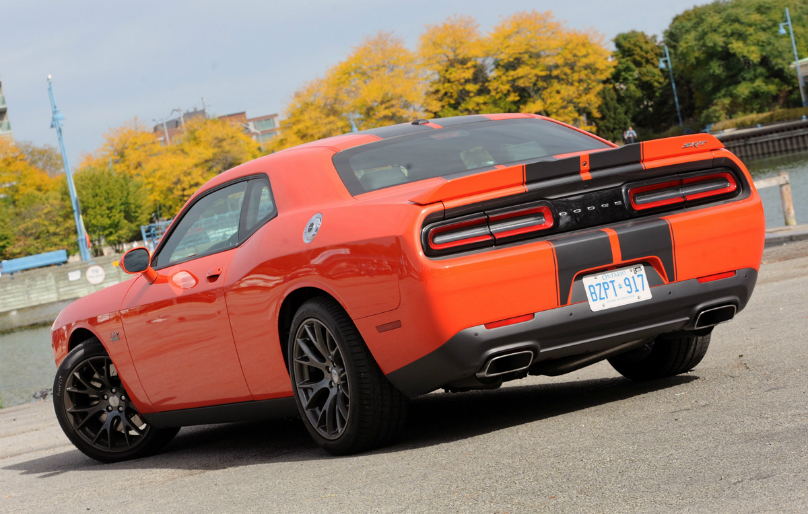