Finding shortcuts with the Jeep Renegade

The GPS wanted to stay on the freeway for the fastest time, but the map route was less distance. Sometimes, it’s best to follow the instructions from the GPS.

Short cuts always seem a good idea on a map. At least they do on a paper map — today’s GPS navigation systems are smart and will warn you against them, but then, GPS is a robot with no sense of adventure.

So heading down to New York City from Toronto, I looked at the map for a way to end the drudgery of the interstate. It was a grey day so I should have known better. Scenery is never scenic on a grey day.

Even so, soon after crossing into the U.S. at Niagara Falls, the freeway leads due east for about 100 kilometres and then due south before it starts heading directly toward the city. The map showed a smaller road that cut a diagonal across, saving about 50 km.

RELATED: How do traffic apps know the best route to your destination?

I had to give it a try. The GPS wanted to stay on the freeway for the fastest time, but the map route was less distance and besides, I’d drive a little faster than the limit – like everyone else. It was an easy decision.

As well, the Jeep Renegade I was driving is not an exciting car. It’s not macho, like the Wrangler, nor luxurious, like the Grand Cherokee. It’s not even particularly Jeepish — it’s too cute for that. Any diversion would be welcomed on this eight-hour drive.

I headed east from Buffalo on the New York state thruway, a dull, multi-laned superslab that’s designed to move trucks quickly and easily from city to city. There was a cold drizzle, and it didn’t take long with them windshield wipers slappin’ time to reach the turnoff for Batavia, 55 km down the road. 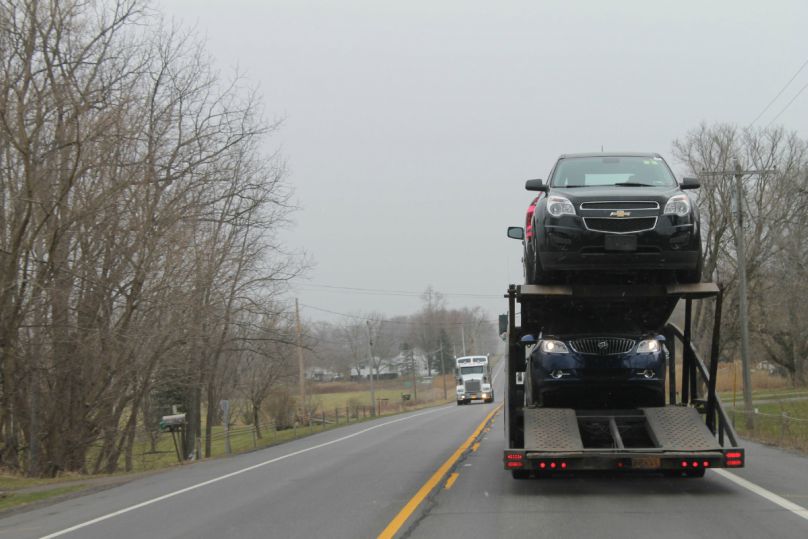 This is where Highway 63 cuts down to I390, taking one side of a triangular route. I steered off the Thruway and toward town, feeling pleased and a little curious to discover the road less travelled.

The problem, however, with paper maps, is they show just straight or wiggly lines with no context. The small hub of Batavia turned out to be a spitting-off point for all the area’s rural traffic. I should have smelled the route’s rat when the GPS showed it shaving only 20 kilometres from the distance and adding five minutes.

And nor would it for a while. A large car transporter lumbered into the lane in front at the town’s first junction, carrying a rear-facing Buick sedan. The Buick had its lights on (did the driver forget?) and they shone directly into my eyes. If ever there was a reason to overtake, that was it. 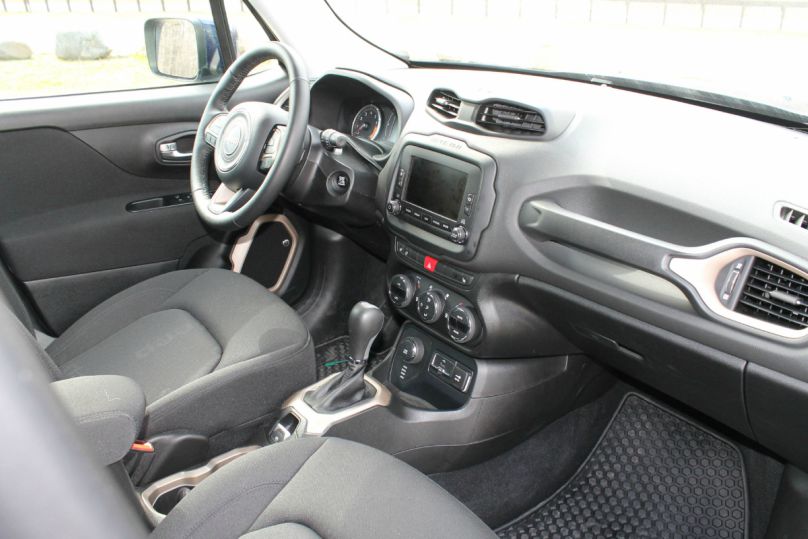 There are many lovely regions of New York state, but the area from Buffalo to Corning is not one of them. It’s a countryside of flaking paint and double-wides, Dollar General and Walmart, and everywhere Bob Evans, Wendy’s and McDonalds. I realized it’s an area best shot through on the interstate, and not a place to dawdle.

It’s immensely frustrating to be stuck behind a truck on a two-lane, unable to pass when other traffic is spaced far enough apart to stop you on the open road, but which then disappears at every blind corner and hill. After a while, I gave up and started listening to the radio, and looked around the cabin of the little cute-ute.

Jeep’s Renegade is a global seller and its newest nameplate. It’s intended to appeal to drivers pretty much everywhere who like the Jeep brand but don’t want any of its sacrifices in comfort, noise, or fuel economy.

It’s not as cheap as the Patriot or Compass. Its base price is $21,495, but that’s with a 1.4-litre four-cylinder turbo engine and — gasp — front-wheel drive. 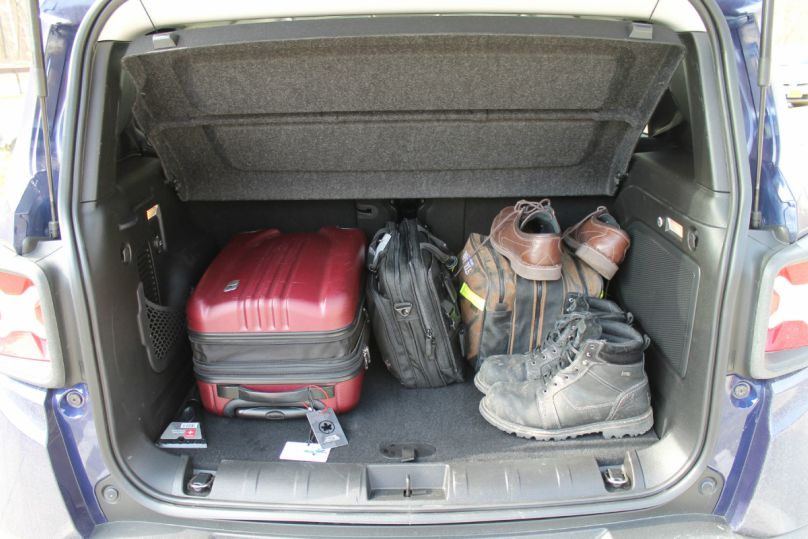 My test unit was the “North” version that includes four-wheel drive for an extra $1,500, and the larger 2.4-litre Tigershark engine with a nine-speed automatic transmission for an additional $2,290. By the time all its options were added together, including $1,100 for navigation on a 5-inch screen, it cost $39,130. Like I said, not cheap.

Fuel economy is very similar for the two engines in the same FWD trim, though it decreases in AWD with the 2.4-litre motor. The larger unit offers more horsepower (180 hp vs. 160) but less torque (175 lb-ft. vs. 184). Neither engine would have had the power to get past the transporter.

I was stuck behind that truck for the entire half-hour distance to the interstate. Eventually, it wasn’t worth the aggravation to try to overtake, so I settled in to be dazzled by the Buick’s headlights.

RELATED: Is driving without daytime running lights legal in Ontario?

When I finally reached the main highway, I was five minutes behind schedule and fed up. I passed the truck at the end of the interstate ramp.

I stopped at the first rest area to use the washroom. A minute later, the truck pulled in too. The Buick’s headlights were still blazing. I considered telling the driver but thought better of it and took to the interstate again, listening to the robot GPS, looking forward to the rest of the drive. 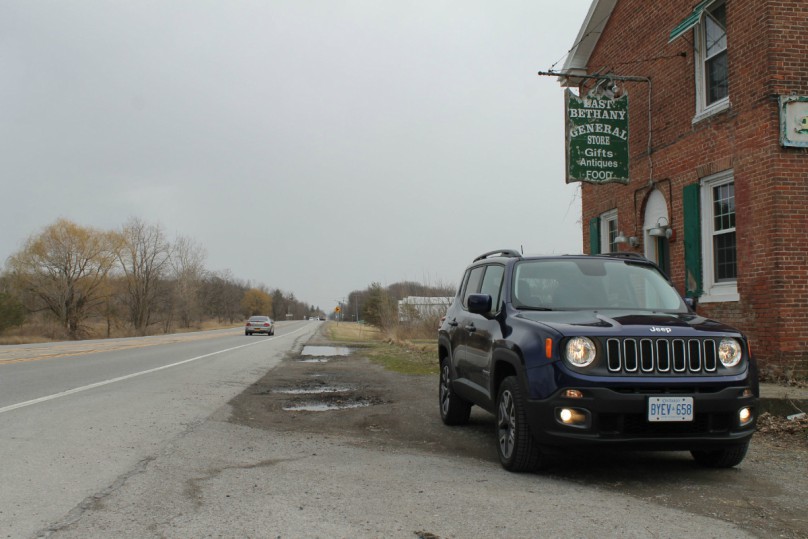 Looks: Many will love it

What you’ll like about this car: It’s a Jeep — grrrr

What you won’t like about this car: It’s a Jeep — meow

The vehicle for this review was provided by the manufacturer. To provide feedback, email wheels@thestar.ca and put the writer’s name in the subject line.