A special edition in the truest sense, and it’s much more than just a badge kit.

If you’ve had the pleasure of enjoying Steve McQueen’s classic film, Bullitt, you’ll remember the iconic Ford Mustang GT that the protagonist drove. Indeed, from the movie’s release in 1968, that green pony car has been etched into our collective cultural memory. On the other hand, if you haven’t seen Bullitt, it’s something you should take the time to watch, not for the car, but rather for the minimalist and raw feel of the film.

Regarding that ’68 Mustang you see in Bullitt, not for a second should you think that McQueen and company had anything in mind except building a durable car suited to the rigours of a brutal and lengthy (but timeless) chase scene. Regardless, McQueen was the arbiter of cool and he knew a proper car when he would see one, and, as it turned out in these last fifty years, the film car became a cultural icon.

The production company built two of these Mustang GTs for the film and, according to the owner of the lone surviving car, Sean Kiernan, the producer’s approach was simple. As Kiernan told wheels.ca, “It was basically, ‘Buy a car, beat it to death, and make sure it’s not going to fall apart.’’ One Mustang sacrificed itself in the name of the film and the other ending up in Robert Kiernan’s possession in 1974, who subsequently declined at least two requests by McQueen to sell the car back to him.

Indeed, they started with production GT Fastbacks, but modified them with tricks that seem oddball today – Ford F-100 truck springs in the front suspension, a rear suspension that Kiernan describes as “Frankenstein stuff”. They used an aftermarket carburetor, different cams, truck manifolds, a custom exhaust, in addition to the necessary camera mounts on Kiernan’s car.

For aesthetics, the producers also decided upon the removal of some of the standard chrome trim, the extended green paint, and the torque thrust style wheels. All very cool for 1968 – and for all Hollywood eternity – and you can see where the 2019 Bullitt gets its distinguished looks.

Kiernan’s son, Sean, inherited the car four years ago and put the car back together prior to the film’s fiftieth anniversary. 2018 is perhaps the right time for Ford to produce another special edition Bullitt because the new Mustang is a brilliant starting point. 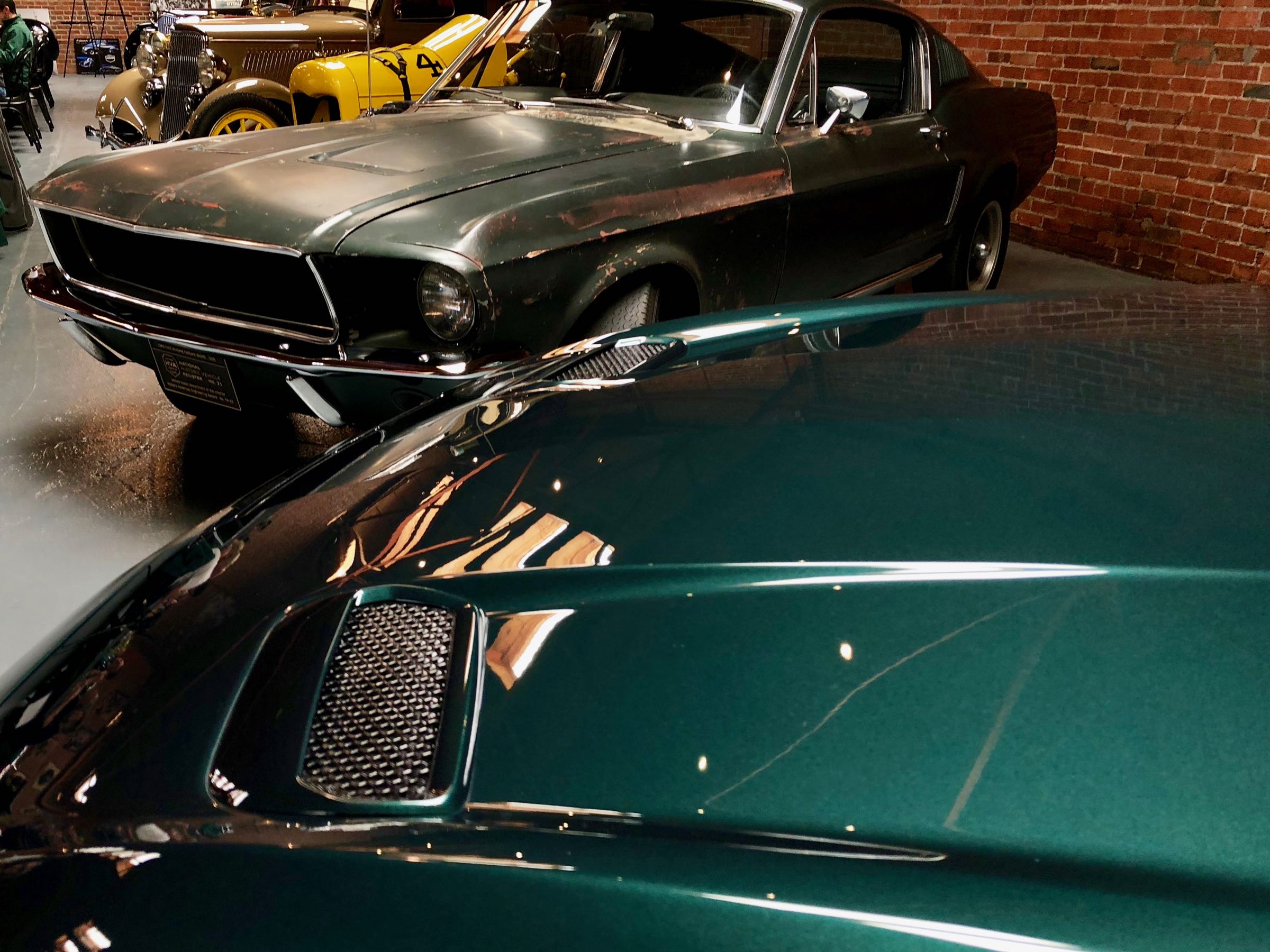 Mechanically, the 2019 Bullitt is distinct among all Mustangs and, while you could argue that it’s very similar to a GT with the Performance Package 1 option, it differs in all of the right ways.

First, it makes more power and sounds so much better than a GT. That’s because it’s fitted with a cold air intake, the GT350’s intake manifold, an exhaust system specifically tuned for Bullitt, and unique engine calibrations that give it a distinctive exhaust burble on overrun. In all, the Bullitt simply sounds great.

Second, the GT’s Performance Package 1 option with magnetic ride dampers is standard. That means you get that hunkered down, corner carving suspension set up, with Michelin Pilot Sport 4 tires, and unique red Brembo brakes up front. The black torque thrust wheels and red calipers give the Bullitt a distinctive look, without being over the top.

What’s truly impressive is that the suspension delivers both excellent handling and reasonable ride comfort. Not jarring, nor too stiff, turn in is crisp and precise, and at least on some of the most enjoyable Northern California roads, handling is balanced and confident. Braking is similarly top notch, with great feel and modulation always available from the pedal, and feedback is crystal clear. This Bullitt’s got the handling chops to go with the attitude. 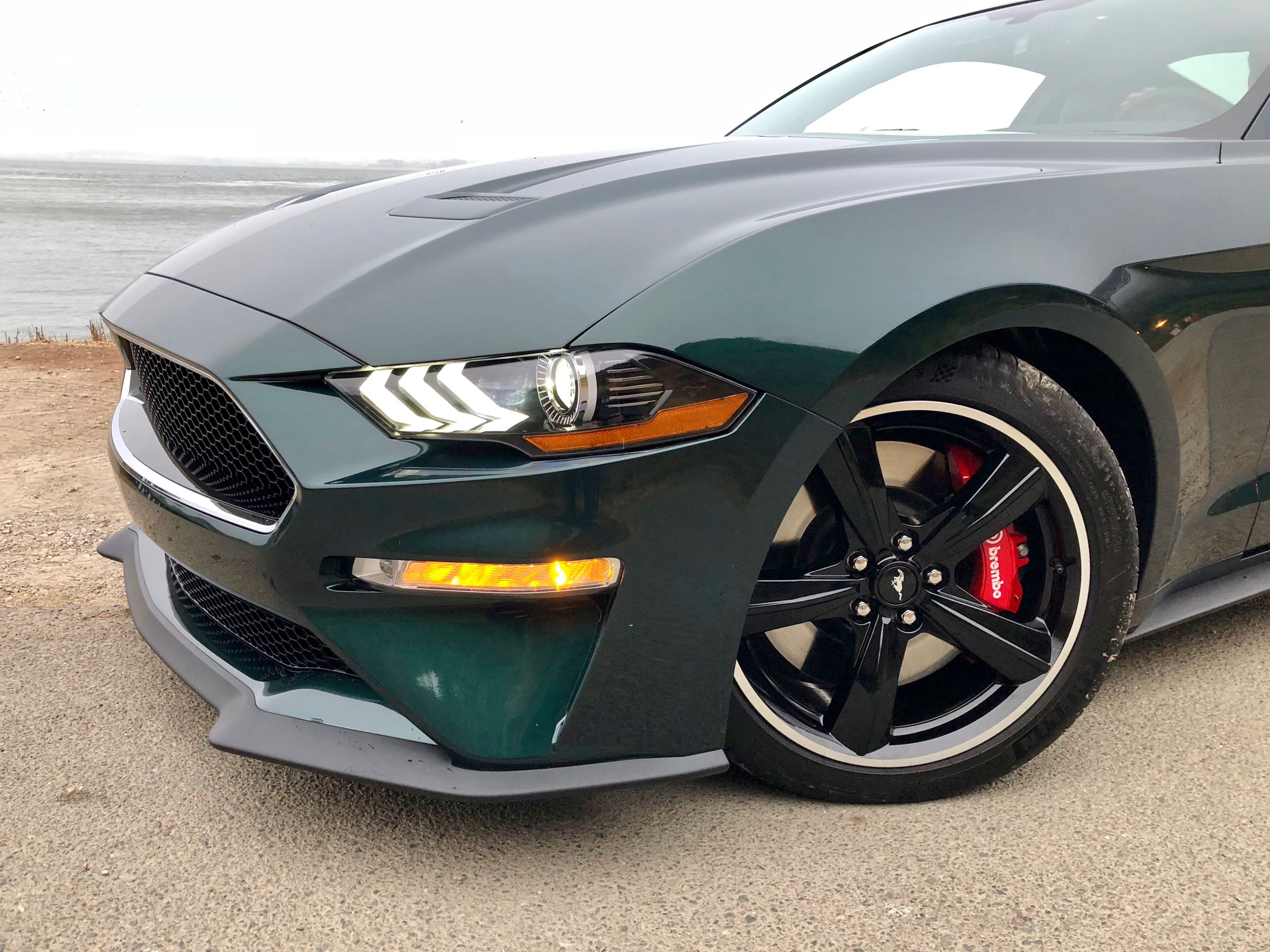 With the unique engine tuning, the five-litre V8 makes 480 horsepower and 420 pounds of torque, it’s got just right amount of grunt that’ll throw you and your passenger into the seatback, plus it sounds like a Mustang should. The V8 rumbles on idle and thunders on open throttle. And it tops out at over 260 kilometres per hour.

Shift action from the six-speed manual is precise and that cue ball shifter reminds you that you’re driving something special. There’s decent feel out of the clutch pedal, too, and there’s the right amount of heft to ensure smooth, precise timing of your shifts. Sorry, kids, there’s no automatic transmission available.

The interior design program honours the film with its black leather upholstery, though the subtle green stitching, which is very cool today, isn’t authentic to the interior of the movie car, which was all black. The aluminum trim across the dash isn’t found in any other Mustang, nor is the cue ball shift knob – also found on the movie car.

For Canadian buyers, there are only two options, both of which are important. The electronics package includes two must haves – navigation and a better sound system – and the Recaro seats both more supportive and more comfortable than the standard seats. 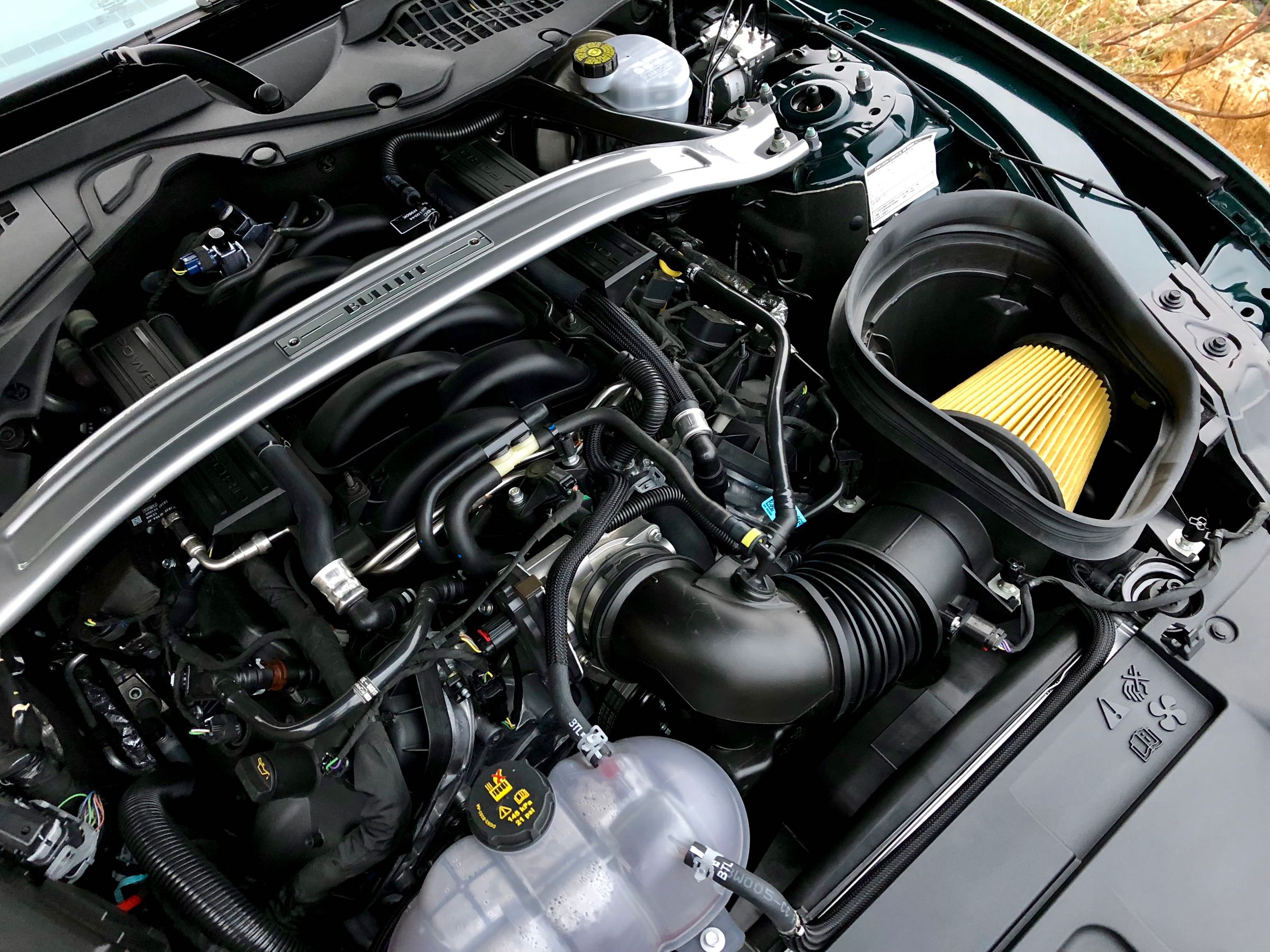 On the outside, you’ll notice the limited badging, the wide, chrome trim around the upper front grille, the widened lower front grill, chrome trim surrounding the daylight opening, the torque thrust style wheels, red Brembo calipers, and understated exhaust tips. The massive Bullitt badge on the trunk lid is supposed to represent a faux gas cap and is a tip of the hat to the film car. It’s perhaps the only non-subtle part of this Mustang.

All of these details give this Bullitt more attitude than any other Mustang, all perfectly in line with the movie car. And attitude is what this car is all about and this car seamlessly embodies McQueen’s effortless cool. It’s a car that’ll do the job, do it right, and look good doing it.

Dark Highland Green is a gorgeous metallic colour and with the appropriately subtle chrome highlights, it looks every bit the Hollywood star. Forget the Shadow Black – unless you’re one of those blokes who must have this unique specification, but doesn’t give a flying Ford about the Hollywood connection. Even then, one could argue that you’re dishonouring the legend of Bullitt, but you won’t be disappointed with its performance and all around good looks.

If you decide to watch the film (again, you should), whether it’s the your first or fiftieth time, you can recognize Kiernan’s car in a number of scenes. Kiernan told wheels.ca, “When you’re watching the chase, just look for the camera mounts on the rocker. This car ended up being in 90% of the chase. This is the one in the scene where Frank Bullitt steals the newspaper. This is the one that gets spun out, this is the one that ends up in the ditch, and this car is pretty much in every part of the chase, but the jump.”

How the Lost Bullitt Mustang was Almost Turned into Eleanor

As for the 2019 Bullitt, it is a special edition in the truest sense, and it’s much more than just a badge kit. It’s a more resolved, interesting, and unique Mustang that you could never duplicate, even by ticking the most appropriate GT option boxes. If you’re lucky enough to get your hands on one of these, it’ll be pure pleasure to get behind the wheel, turning each drive into an occasion, and it’s the sort of modern pony car that’ll make its own history. 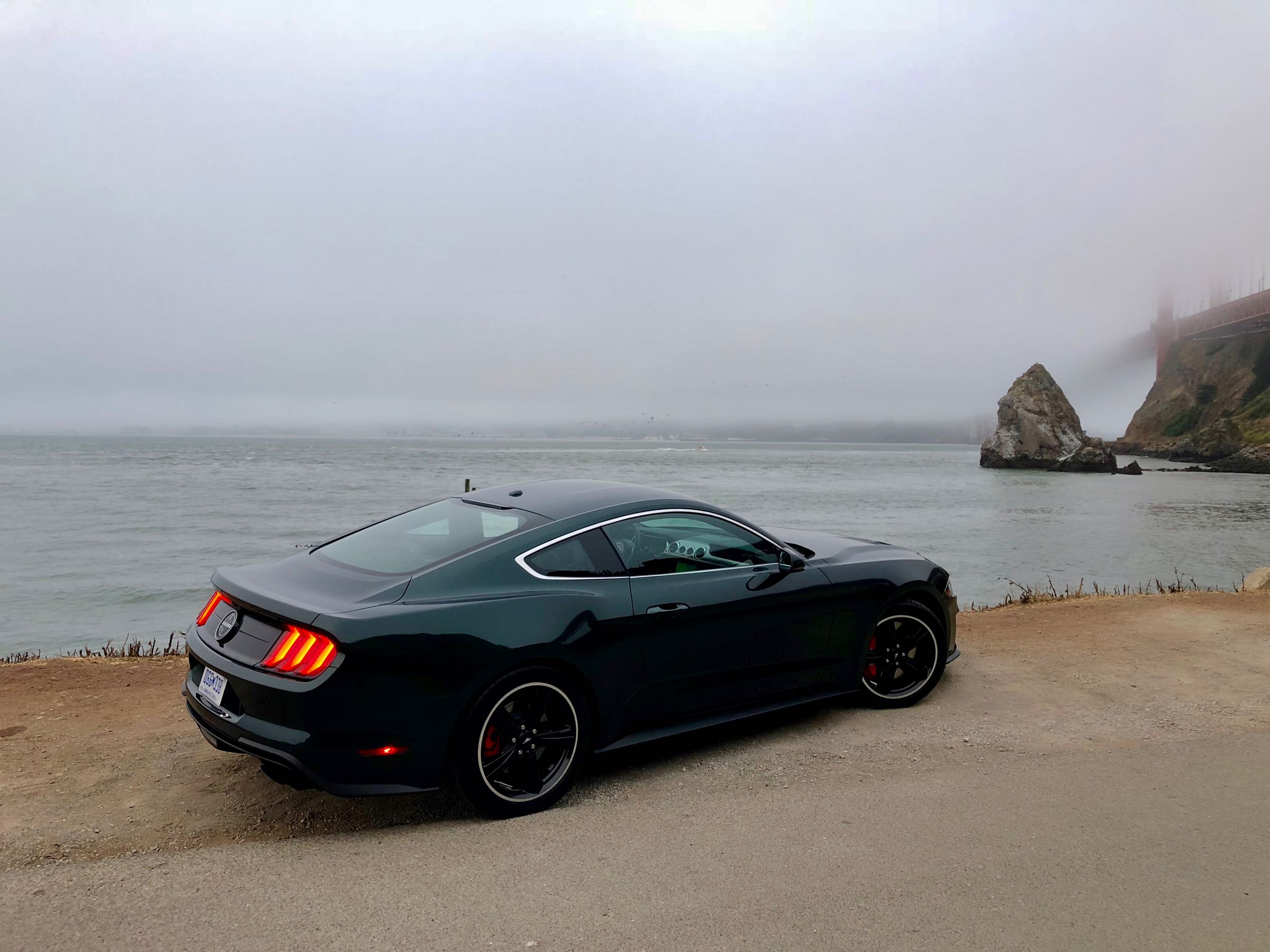