MALIBU, CA – It really warms my heart to see performance niches thrive even in an automotive world where the headlines are often dominated by electrification, autonomous driving and, of course, more SUVs.

Take Jaguar Land Rover (JLR), for example. It’s a company that checks all those boxes (especially SUVs), yet despite its outward appearances as a good automotive citizen, it still maintains a small high-performance skunk works operation in Warwickshire, England ruled by mad scientist engineers that appear to want nothing more than to make vehicles capable of crushing Nürburgring lap records.

I’m being a bit tongue-in-cheek here, but the fact that JLR runs a Special Vehicle Operations division (SV for short), is remarkable given that it’s a relatively small player compared to other global automakers. It sold just 14,545 units in Canada in 2018, which is barely a quarter of Mercedes-Benz sales and a fraction of what big players such as Ford, General Motors, and Toyota sell.

Given that reality, JLR could be forgiven for deciding that the investment required for an SV operation doesn’t make sense for a company of its size given the development cost and the expected rate of return.

But the importance of ‘halo’ vehicles goes beyond sales figures due to their aspirational nature, which tends to have a positive impact on a carmaker’s other models. The average consumer, for example, isn’t likely to buy a low-volume Nürburgring-conquering XE SV Project 8, but they might consider a regular XE.

The first thing to know about the Range Rover Velar SVAutobiography Dynamic Edition (Velar SVA moving forward) is its rarity. Fewer than 600 will be built and only 60 will make it to Canada, so those interested best hurry to their local retailers. JLR says the Velar SVA is only for the 2020 model year so intenders best act now.

As for the vehicle itself, it’s based on an aluminum architecture shared with the Jaguar F-Pace SUV, XE and XF sedans and is built in the same plant in Solihull located near Birmingham, England.

Like its sister high-performance SUV, the F-Pace SVR, the Velar SVA utilizes the same 5.0-litre Supercharged V8 and ZF-sourced 8-speed automatic transmission. Engine output for both vehicles is the same: 550 hp and 502 lb-ft. of torque. 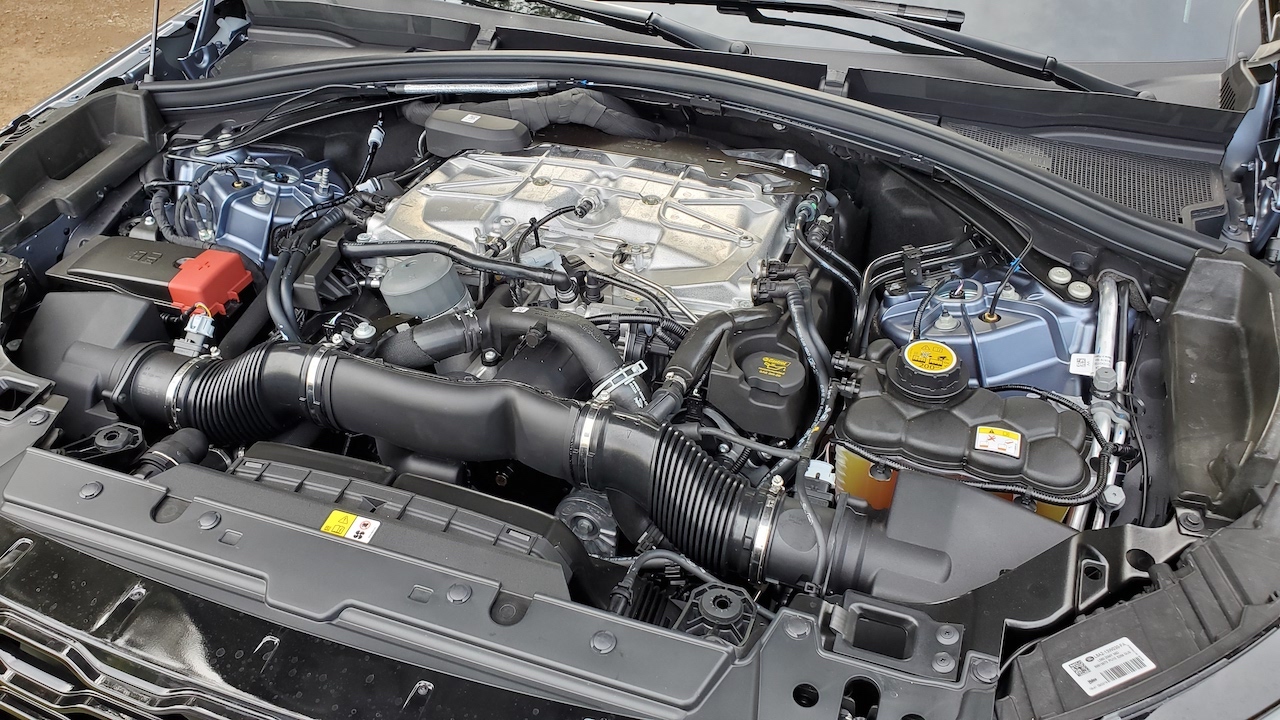 The walk-up appeal of the Velar SVA is undeniable. I’ve been a bit critical of design chief Gerry McGovern’s homogenization of Land Rover’s lineup, but the Velar is an undeniably attractive SUV and it’s even sexier in SVA guise.

The first thing that struck me on my test vehicle was its 22-inch lightweight forged alloy wheels (21-inchers are standard) that exude a strong performance character. That feeling was further reinforced by the presence of unique front and rear bumpers, body-coloured side mouldings, aero-enhancing undertray and integrated quad tailpipes. The Velar SVA looks like its less powerful siblings, but these design enhancements let all who approach know that it’s no garden variety SUV. 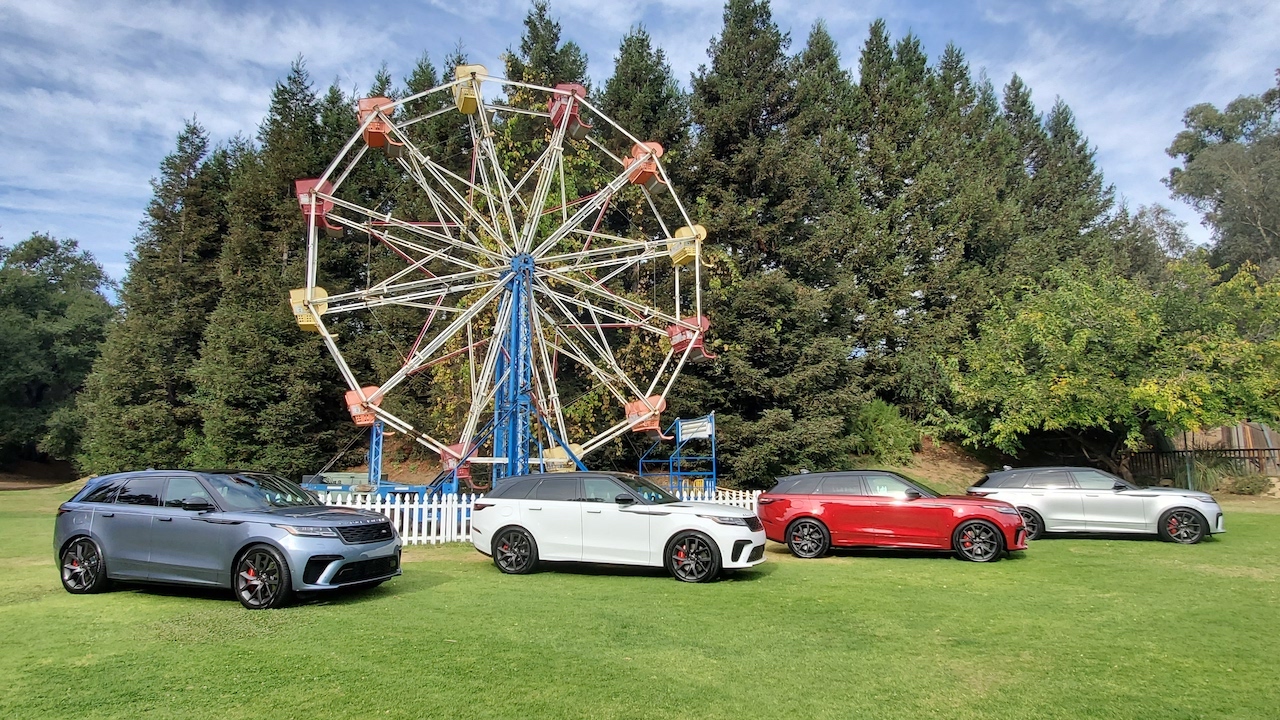 On the inside, the Velar SVA receives the finely finished leathers, plastics, and metallic accents the rest of the model range has, along with large liquid smooth touchscreens encased in piano black trim, but small design touches are also present to set it apart. 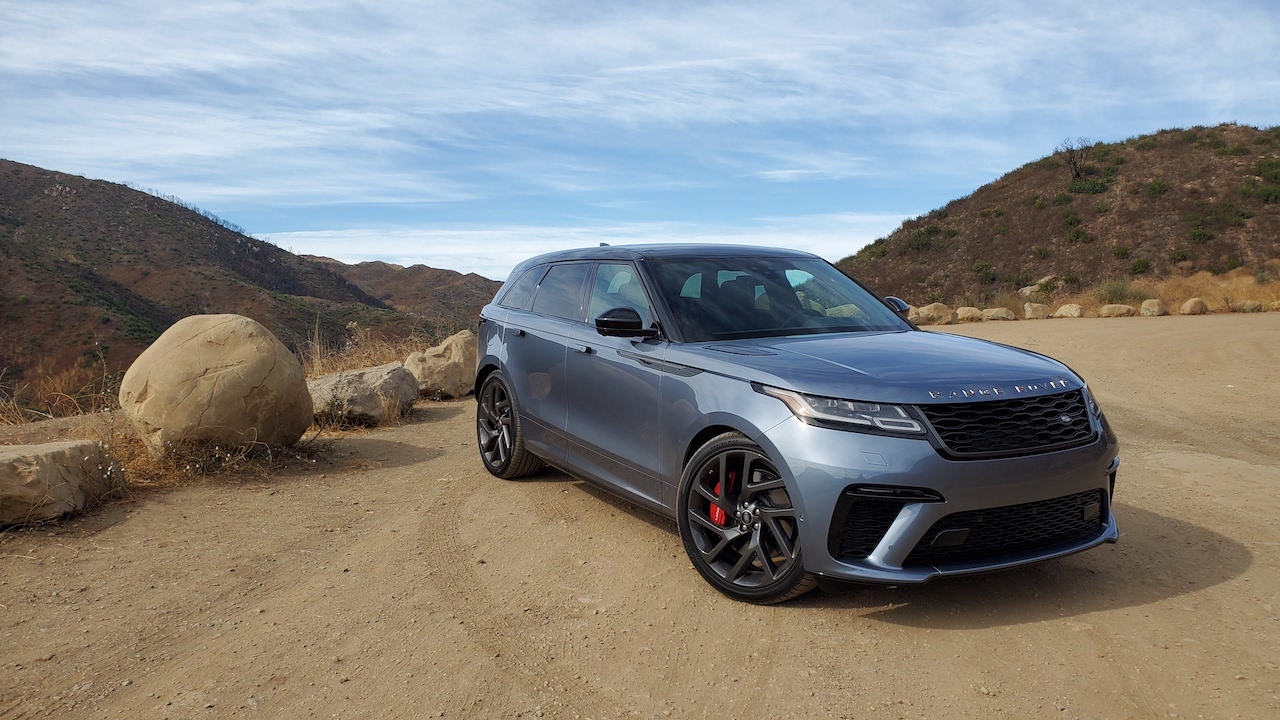 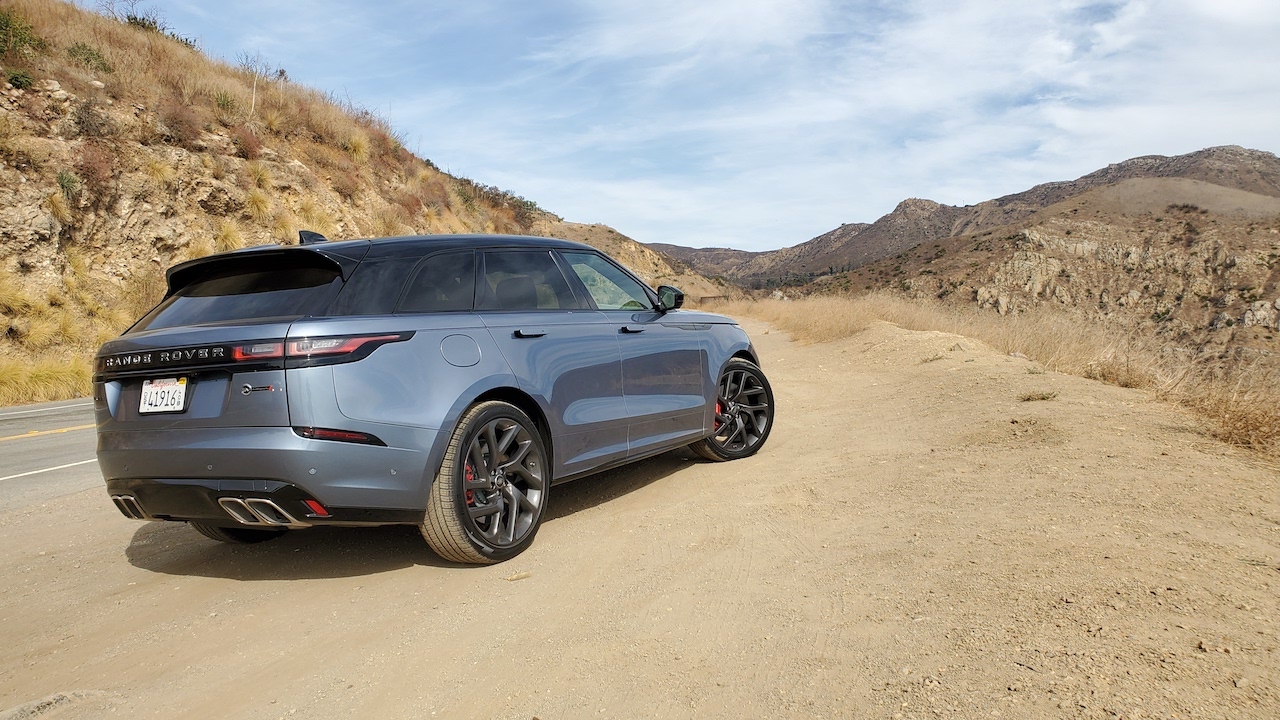 The Velar SVA has the look and feel of a finely tailored suit where everything fits just right and can be worn on all occasions. The Byron Blue finish of my tester combined with its large blacked out grille, LED headlights and taillights, and floating black roof represents a perfect convergence of style, sophistication and performance.

Bottom line, the Velar SVA offers a sumptuous, thoughtfully designed cabin rich in amenities that will make you want to spend time in it, either as passenger or driver.

On the road (and off)

The somewhat muted, low baritone thrum of the Supercharged V8 at start up sits in contrast to the barkier sound the same engine makes in the F-Pace SVR I drove recently. SV boss Jamal Hameedi, who was on hand for the drive in California, says the tuning was intentional and designed to build a separate identity for the Velar SVA.

The canyon roads I drove my tester on near Malibu are of the two-lane undulating twisty type (well done, event organizers) that are designed to encourage the driver to really explore the performance characteristics of a car’s setup. 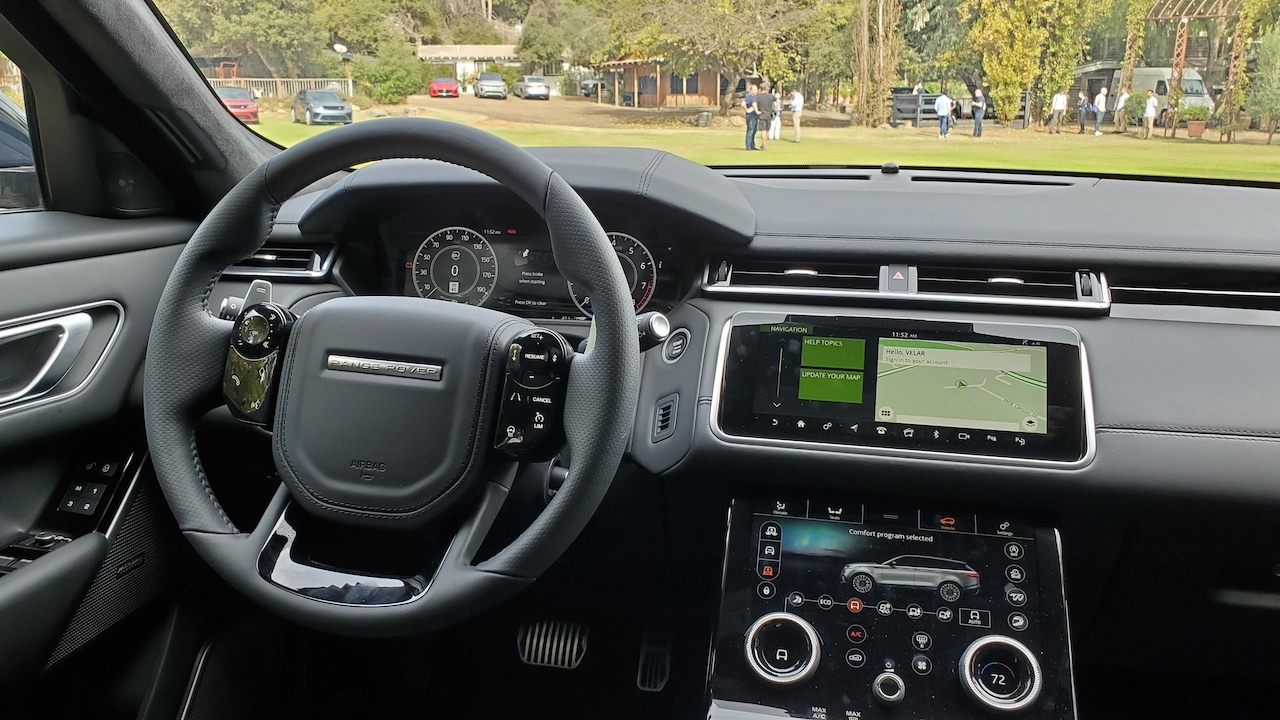 The Velar SVA proved to be a delightfully engaging vehicle on these roads. As instructed, the drive mode selector remained set to dynamic, the gear selector in sport and the dynamic exhaust engaged. In this most aggressive setting, the lusty growl of the V8 provided a delightful soundtrack but did not prevent a normal conversation from taking place between myself and my drive partner.

What sticks in my mind are the sharpness of the throttle response, a quick and light steering feel and vehicle mass that didn’t feel ungainly. The Velar SVA is not a small vehicle by any means, but it feels light on its feet when dialled for full-on performance. 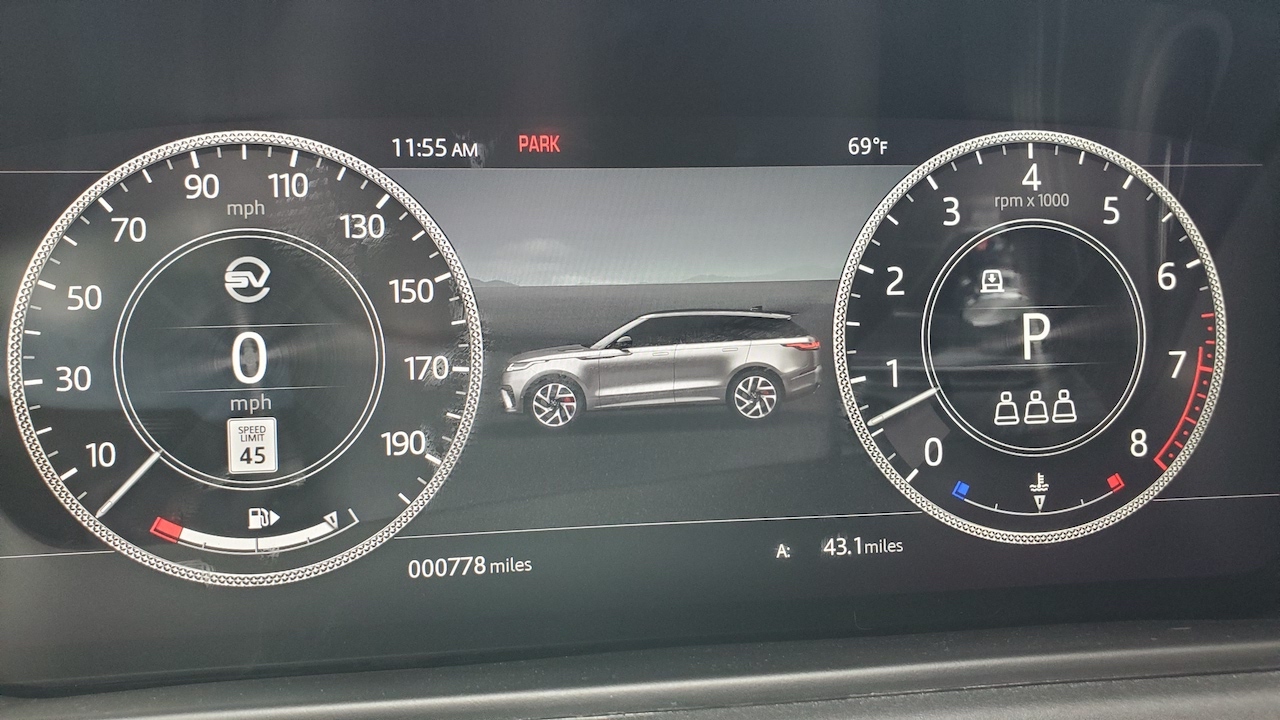 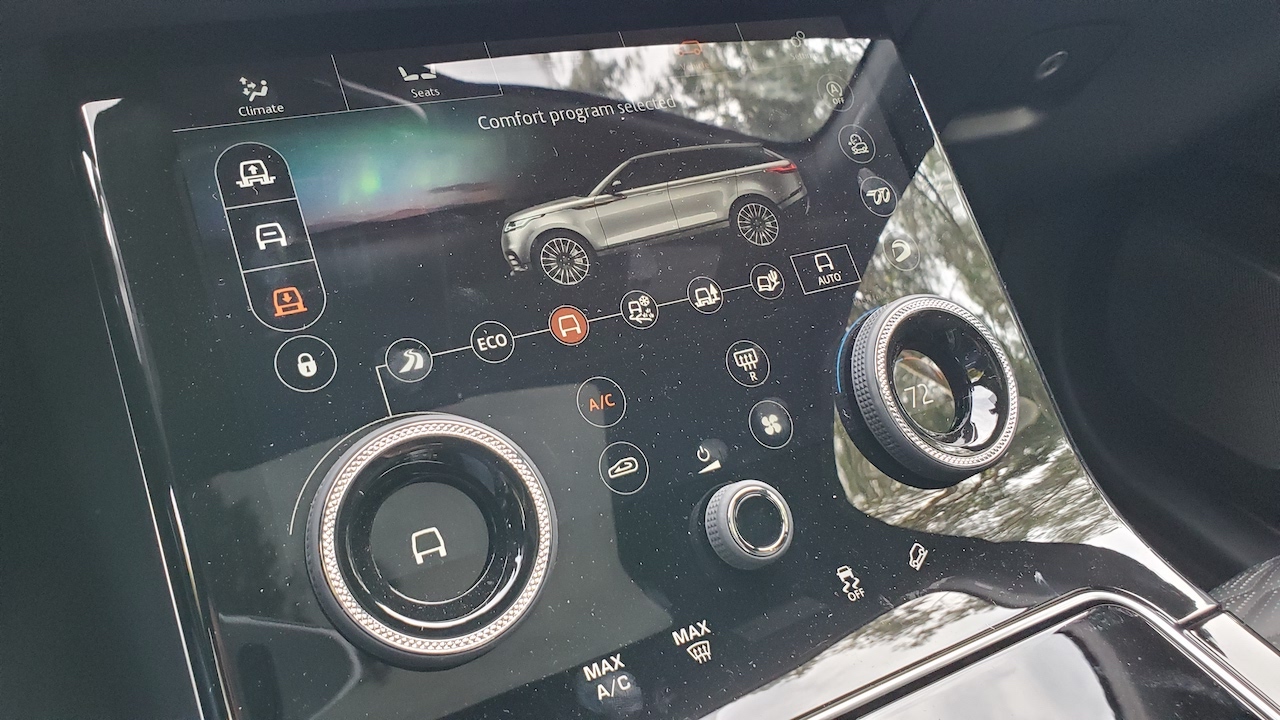 And because it’s a Land Rover, off-road capability is encoded into the DNA of the Velar SVA. While it might not be the most capable in the family, it’s no slouch either. My test drive included a short off-road section of climbing and descending, which my tester handled easily.

The ride height of the air suspension was raised for better approach and departure angles, the drive mode was set to mud and ruts and the hill decent control was engaged. This combined with an all-wheel drive system that variably shifts engine torque, including up to 100 percent to either the front or rear wheels depending on driving conditions, the Velar SVA really is a go-anywhere vehicle.

During the product briefing, Hameedi ran through a slide presentation outlining the various aspects of the Velar SVA and the one that caught my eye mentioned the car’s ‘mission’, which (paraphrased) goes something like this: create a Velar flagship, combine V8 powertrain with a more dynamic chassis and luxurious interior and, finally, build the most dynamically capable and luxurious Velar. 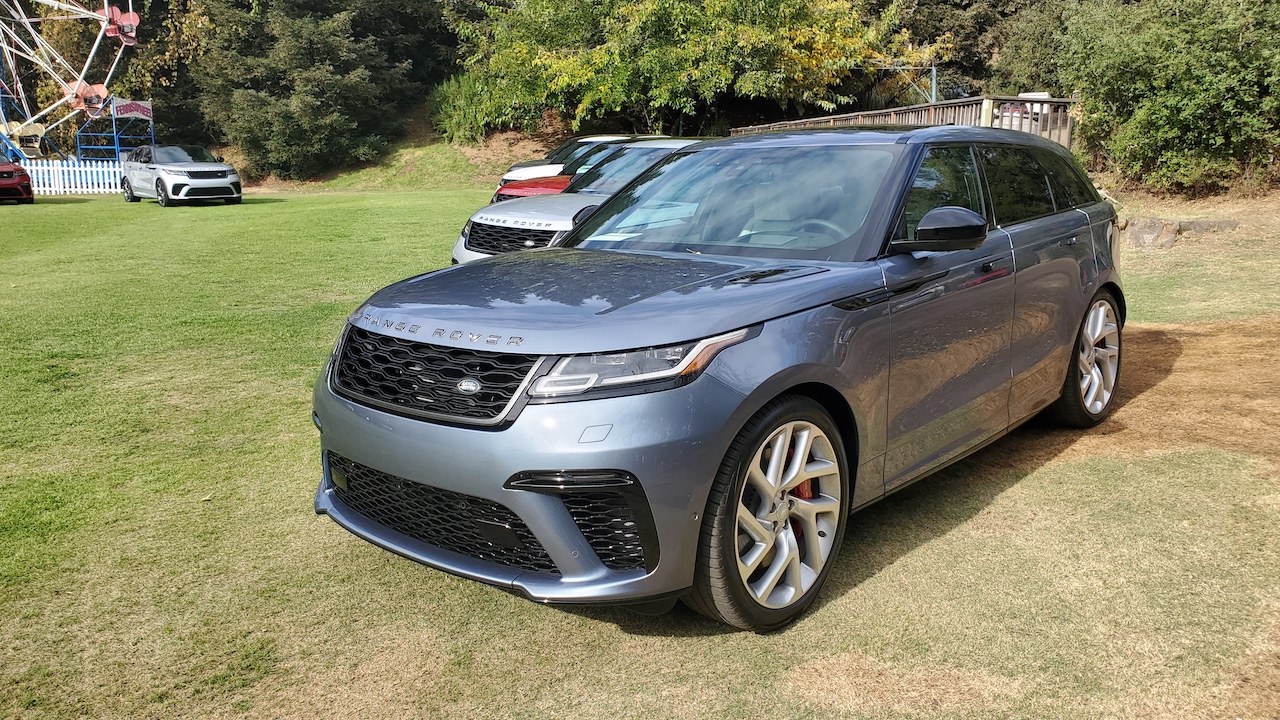 Based on my brief time with it in California, it appears all goals have been achieved. It’s a shame the Velar SVA isn’t available in greater numbers and won’t be around for long, but for the fortunate few that get their hands on one, they will indeed own the very best that Land Rover has to offer.