The Mazda3 is already an excellent car. It has moved more upmarket over time with a strong emphasis on style, luxury, and design. You can also get it with all-wheel drive.

For an entry-level compact its cabin wouldn’t feel out of place in a vehicle that costs twice as much. And Mazda’s obsessive nature towards vehicle dynamics makes for a car that’s also great to drive.

It’s taut and responsive, but still very comfortable. The ride is refined and everything is well balanced. There’s also more grip than you expect and a lot of road feedback with easily the best steering feel and seating position in its class.

The best cars to drive are the ones that give the driver confidence and the Mazda3 will make you feel like Lewis Hamilton.

With a chassis this good and the most powerful engine making only 185 naturally aspirated horses, forward thrust is not easily found in the Mazda’s hand. You have to work for it; but that wasn’t such a bad thing. I thoroughly enjoyed rowing the 6-speed manual, trying to extract every last ounce of power. It was fun, but I can see how more grunt would be a good thing here.

Well, pine no longer because Mazda has taken its corporate 2.5-L turbo 4-cylinder motor, the same one that powers its biggest SUV, and shoehorned it into the engine bay of the Mazda3.

The effects of this are felt instantly. Drive the turbo-equipped Mazda3 for about 10 seconds and it feels like a different car. This might only be a 4-cylinder but it makes 250 hp and a hefty 320 lb-ft of torque at 2,500 r.p.m. (on premium fuel) and you can feel it. It’s not an explosive amount of thrust and it doesn’t come on all at once. Mazda has tuned this car, like most of its products to behave predictably and in a linear fashion. Push the throttle down 10 per cent and you will accelerate 10 per cent faster. It’s the same with the braking and the steering. It’s very natural and there isn’t an excess of anything. No overly sensitive gas pedals or steering that feels too twitchy here.

Floor it and a pleasant burble fills the cabin as your torso gets pushed firmly into the seatback. The 6-speed automatic, the only available transmission, might be down on gears but it shifts smoothly and quickly. My butt-o-metre estimates the 0-100 km/h run can be accomplished in around five-and-a-half seconds, much fleeter than the non-turbo Mazda3. 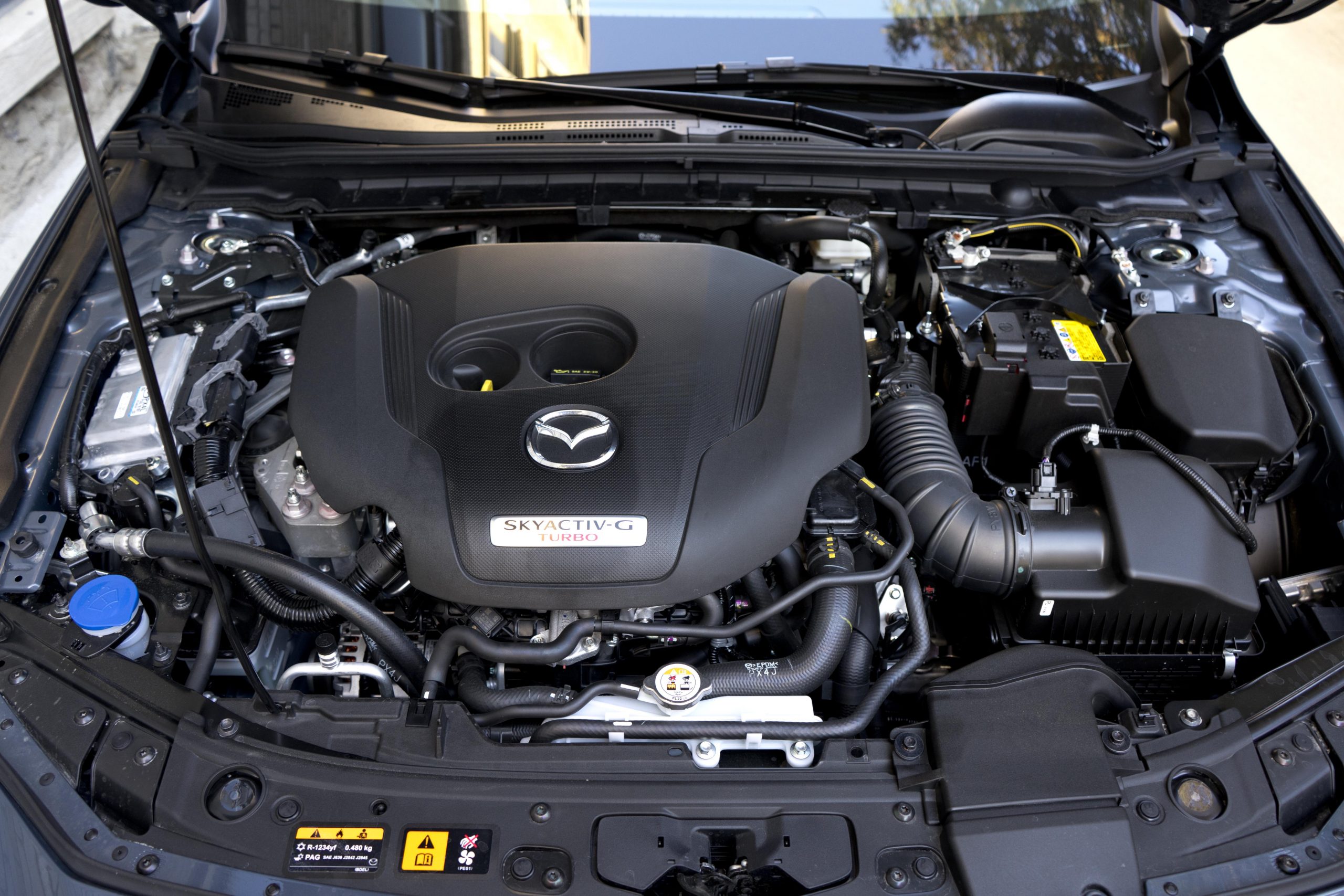 Because the suspension was already so well sorted, the engineers didn’t have much to do. To compensate for the extra weight of the engine, spring rates have gone up by 15 per cent and the dampers are slightly stiffer. A stiffer front knuckle for more direct steering response is also employed, but that item will be on all Mazda3s going forward. Turbo-equipped 3s will also benefit from improved G-Vectoring control (GVC) and a new algorithm governing the i-Active AWD system. The idea here was not to alter the vehicle dynamics but rather maintain them to compensate for the increased power.

A drive route consisting of flowing sweepers and tight switchbacks was the perfect place to test all this out and even on squishy winter tires the Mazda3 is a delight. Very similar to the non-turbo versions, but now you’ll be grinning ear to ear on corner exits. Steering feel is a standout, with high levels of feedback and precision but that’s always been a Mazda strongpoint. Body roll is controlled and kept to a minimum but there’s still enough compliance for a comfortable ride.

Mazda is not positioning this as a competitor to the recent crop of brash hot hatches like the Honda Civic Type R and Hyundai Veloster N. The Mazda3 rates much higher on the maturity scale. There are no big wings or aggressive dive planes to be found here. For all intents and purposes, it looks just like any other Mazda3. Clues for nerds include black wing mirrors, black wheels, slightly larger exhaust tips, and a small turbo badge on the hatch. You have to really know your stuff to spot one. 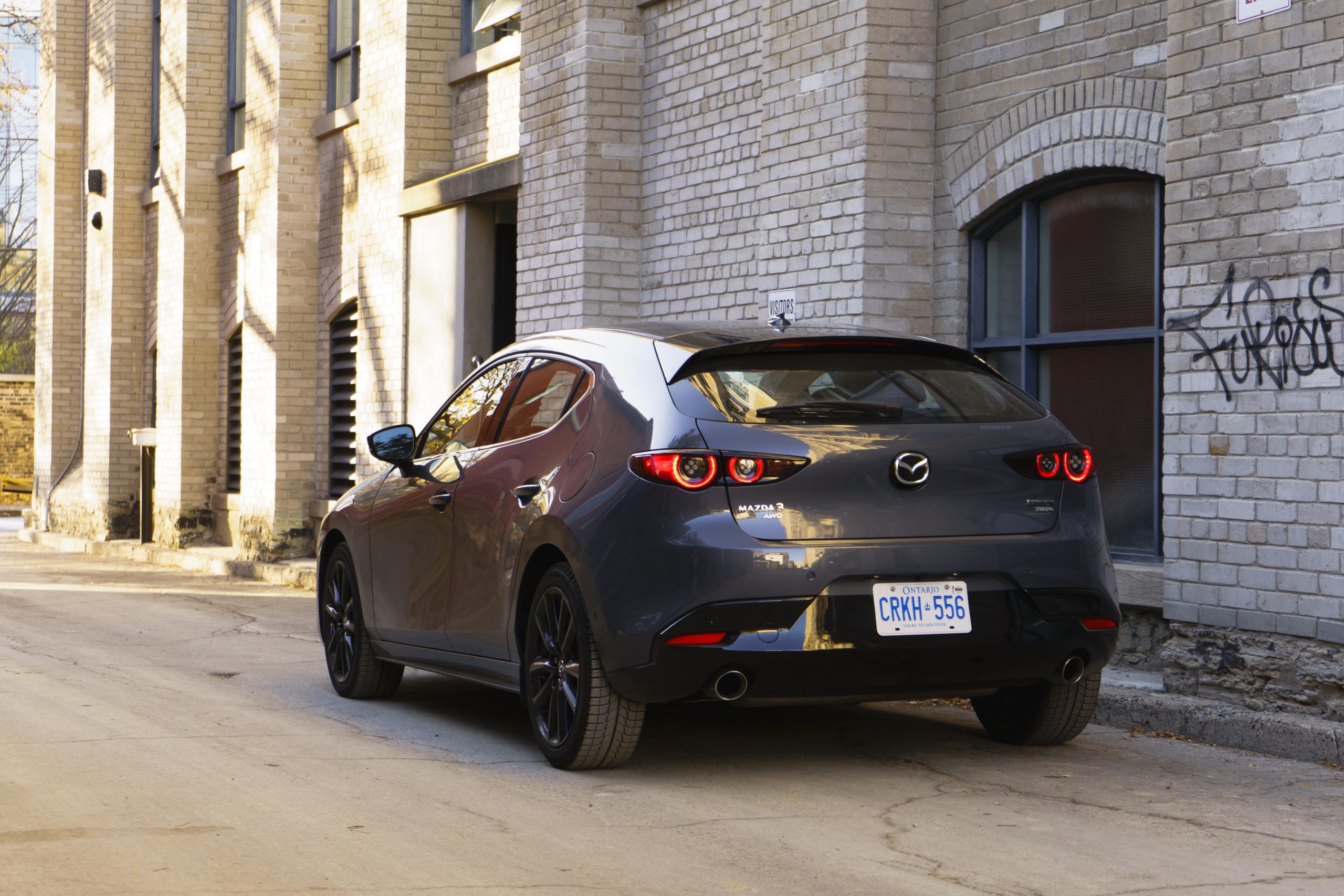 I still can’t help but think how much cooler this car would be if it had a Mazdaspeed badge somewhere on it. Yes, this is not a hot hatch but the Mazda3 is so serious and so good at doing its job it can feel boring. A little drama can go a long way here.

Coming in at just under $36,000 for a Mazda3 Sport GT equipped with the 2.5-L turbo and $1,000 less for the sedan means this is not cheap and it nips on the doors of some of the entry-level compacts from across the pond like the Audi A3, BMW 2-series and the Mercedes A250, all of which carry far more gravitas with their badges. This is not a mistake, though, and Mazda wants to be seen as an alternative to them. It now has the right engine to do just that and so far so good.