After existing with no utilities in its lineup for its first four years, Genesis is now waist-deep in the SUV business.

First it was the mid-size GV80, launched in late 2020, and now its compact sibling, the GV70 has arrived. It took a while for Hyundai’s luxury brand to take the SUV plunge, what with the GV80 being shown as a concept more than three years before the production variant finally went on sale, but it’s full steam ahead now.

Which leads to the subject of this first drive, the GV70.

Before diving headlong into it, I’ll provide some context for my driving impressions. In mid-June, I drove a pre-production range-topping 3.5T Sport Plus Barossa Burgundy tester with an Obsidian Black Montone leather interior. The unit was in my possession for about three days, and I put about 1,000 kilometres on the odometer.

Much of that mileage was highway, but I also drove it on city streets and arterial roads. I didn’t take my tester off-road but given that it’s focused primarily as a pavement vehicle, I didn’t think doing so was essential to being able to render an opinion on the vehicle. I look forward to off-roading the GV70 in the future. 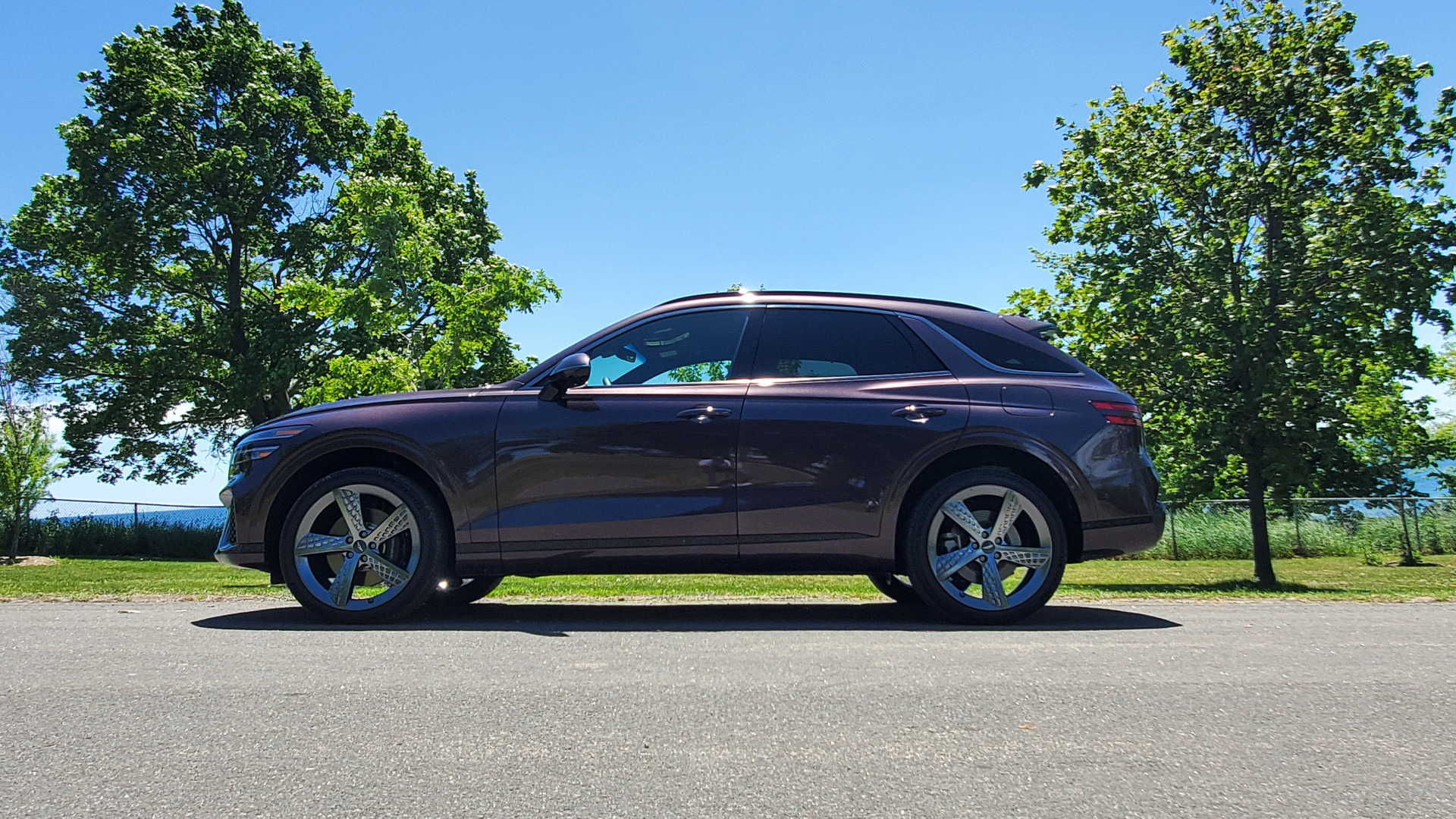 The GV70 is a two-row, five-seat SUV that’s built on a platform shared with the G70 and the Kia Stinger. Despite being smaller than the GV80, it shares engines: a 2.5-litre turbocharged four-cylinder (300 hp / 311 lb-ft) and a 3.5-litre twin-turbocharged V6 (375 hp / 391 lb-ft). Both are paired with an eight-speed automatic transmission and standard all-wheel drive. Six grades are offered for Canada (pricing listed below).

From a design standpoint, Genesis has divided the GV70 lineup into two main sub-categories: elegant and athletic. Elegant mostly applies to four-cylinder models, while athletic applies to the top-tier four-cylinder grade (2.5T Prestige) and the two V6 trims. 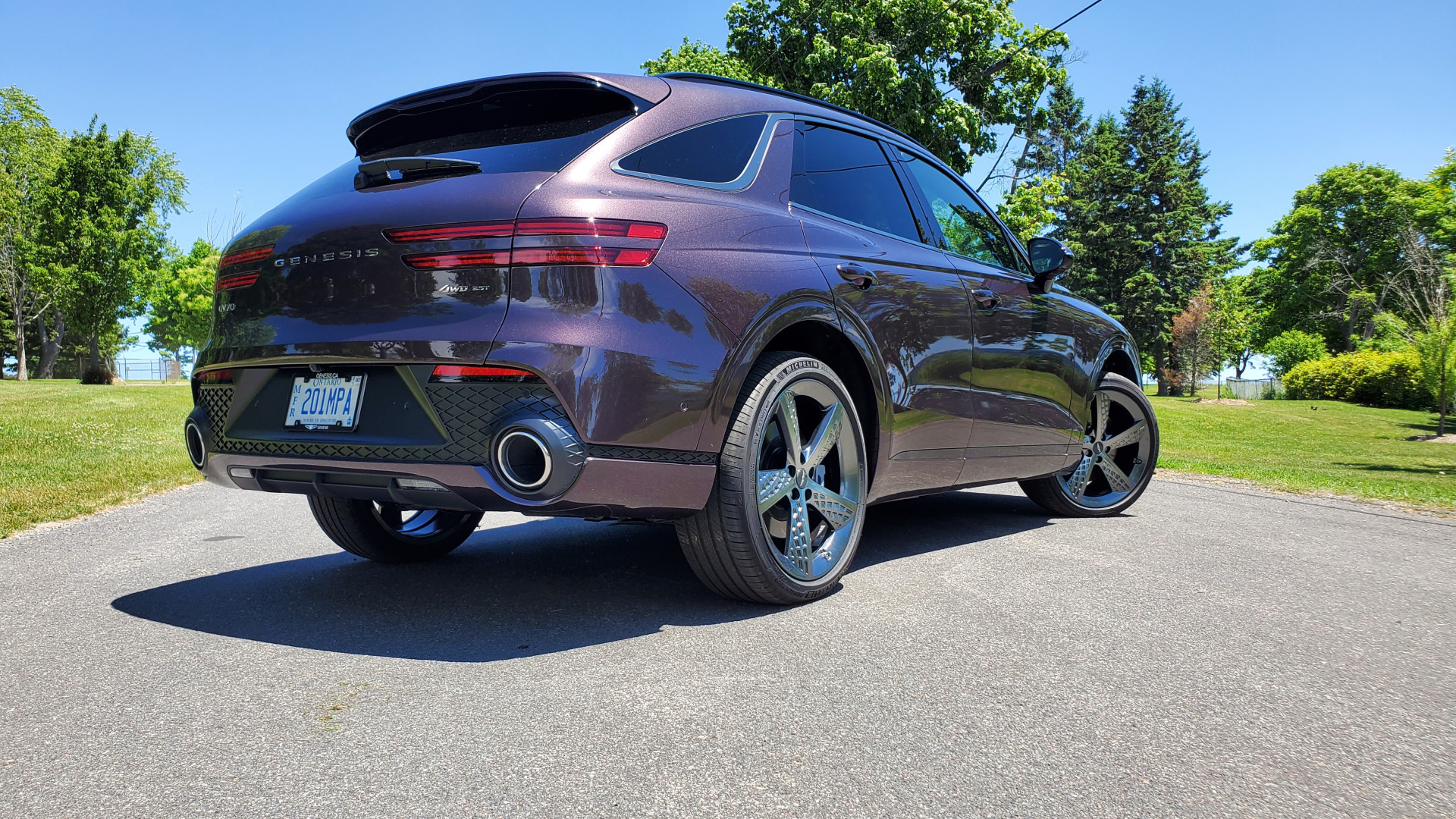 Three main design cues are common to all grades: large pentagonal Crest Grille, Quad Lamp LED headlights and G-Matrix mesh detail which appears most prominently in my unit’s 21-inch alloy wheels but are also visible elsewhere in the vehicle.

As much as I like the look of the GV80, the muscular, sleeker and more powerful stance of the GV70 in sport trim is quite appealing. With its big wheels, bulging haunches and slippery profile, it feels much more like a sport sedan than an SUV, which I’m sure is no accident.

On the inside, the GV70 is awash in fine details that, frankly, took me somewhat by surprise. The centring design theme is the ellipse which the designers were inspired to used based on its resemblance to aircraft wings, which also feature prominently in the brand’s logo. The shape is used throughout the cabin but is most noticeable in the centre stack and door pull cut-outs. 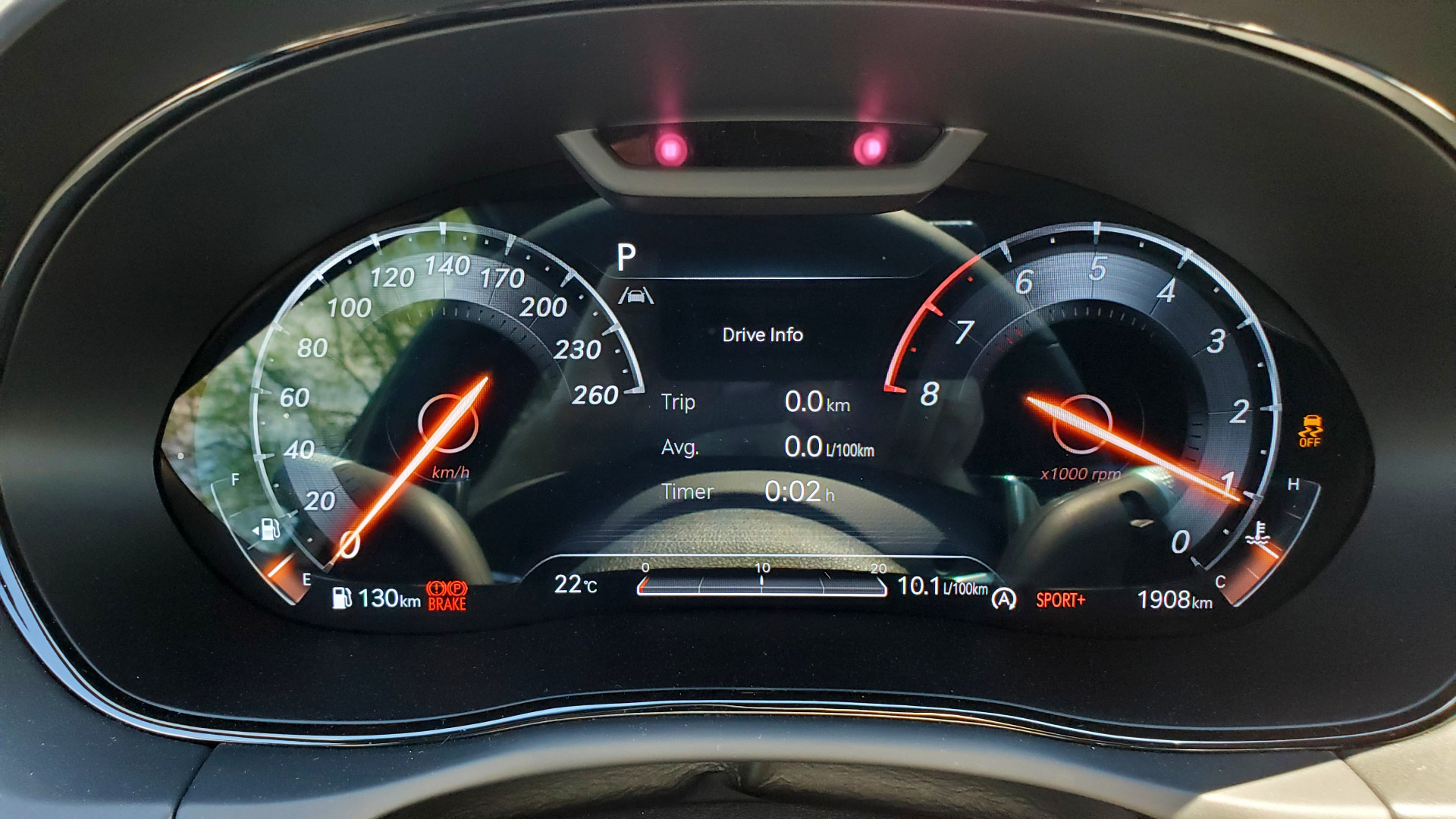 The mix of materials in use here is impressive. From the metallic speaker grille covers, door pulls and centre console inserts, to the backlit, tempered glass gear selector knob, and the rich feel of the quilted leather seating, the GV70 may be smaller than the GV80 but it’s no less ambitious.

Other areas of note in the cabin are the new multimedia controller, which supports a variety of inputs, including handwriting recognition, push, rotation and swipe. The digital displays are also worth mentioning, especially the 14.5-inch infotainment display which includes a gorgeous LCD display and comes packed with a vast array of multimedia functions and apps, plus standard Apple CarPlay and Android Auto connectivity. I was struck also by my tester’s screensaver-type home screen, which offers a tranquil landscape image if one needs a break from staring at navigation maps. A nice touch.

But I saved the coolest one for last: a 12.3-inch configurable digital instrument cluster which uses a group of sensors to project an infrared beam to each eye to create a stereoscopic 3D image that can be viewed from any angle. Sounds a bit technical, I realize, but when you see it in action, it’s pretty mesmerizing. 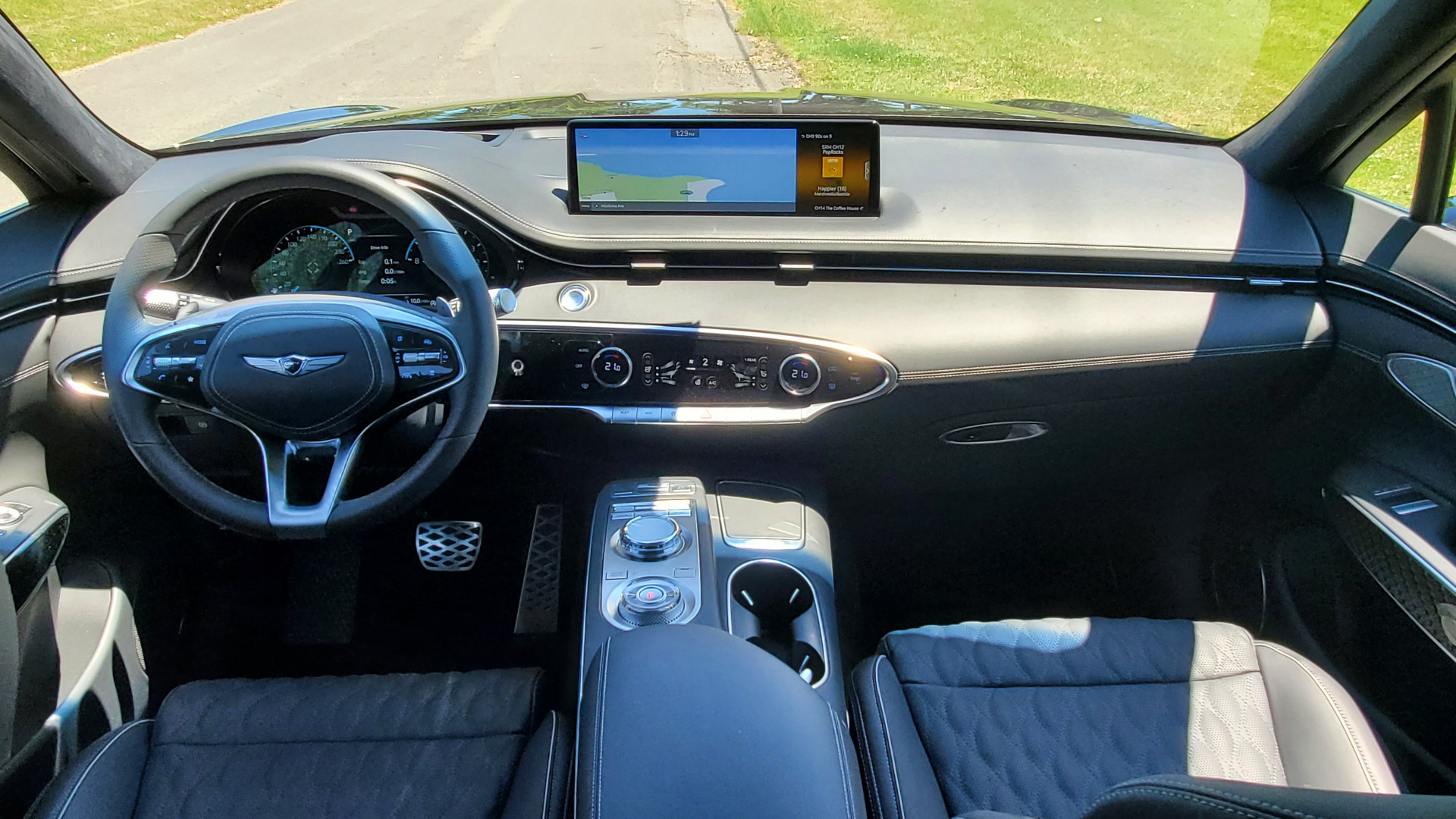 As mentioned, I logged about 1,000 kilometres during my brief test drive and highway driving accounts for much of it. The primary reason for that is I drove to Point Pelee National Park and back from my home in Oshawa. Many thanks to Genesis Canada for setting me up with a Parks Canada pass.

Not to get too far off topic, but if you haven’t been to Point Pelee, like I hadn’t, you really should go. It’s not only a key bird migratory point, but also a vast wetland habitat for hundreds of animals, bird and non-bird alike. Combined with a beach that runs the length of the west side with ample room to camp and trails to explore whether on bike or on foot, Point Pelee really is a national treasure, especially in summer. Can’t wait to go back.

My GV70 tester proved to be a great vehicle for my roughly 800-kilometre round-trip adventure. A serene and comfortable cruiser on the highway in eco mode, and an amped-up rip-snorter on local roads in sport and sport plus where higher rpms and a (very) snappy throttle response had me sling-shotting along desolate country roads with ease.

I’ve often said that sport / sport-plus modes don’t change the general driving character of most vehicles I review, but that’s not the case with the GV70, at least with the twin-turbo V6. It takes until 5,800 r.p.m. to get to all 375 ponies, but peak torque starts at just 1,300, and 391 lb-ft is a lot of low-end thrust for a vehicle of this size.

Put it this way, I found the switch of the drive mode selector from eco or comfort to sport or sport plus to be a bit neck-snapping at first – the throttle mapping and transmission shift points are that divergent. Really night and day stuff.

As for ride and handling, I didn’t do any closed course testing this time around, but in each drive mode (eco, comfort, sport, sport+, custom) my tester delivered a responsive and composed ride, with sharp steering and chassis tuning that didn’t feel too soft or too harsh. Just right, basically. During development, the GV70 was thrashed at the Nürburgring under the watchful eye of Hyundai’s R&D boss Albert Biermann, and the benefits appear realized in the final product. 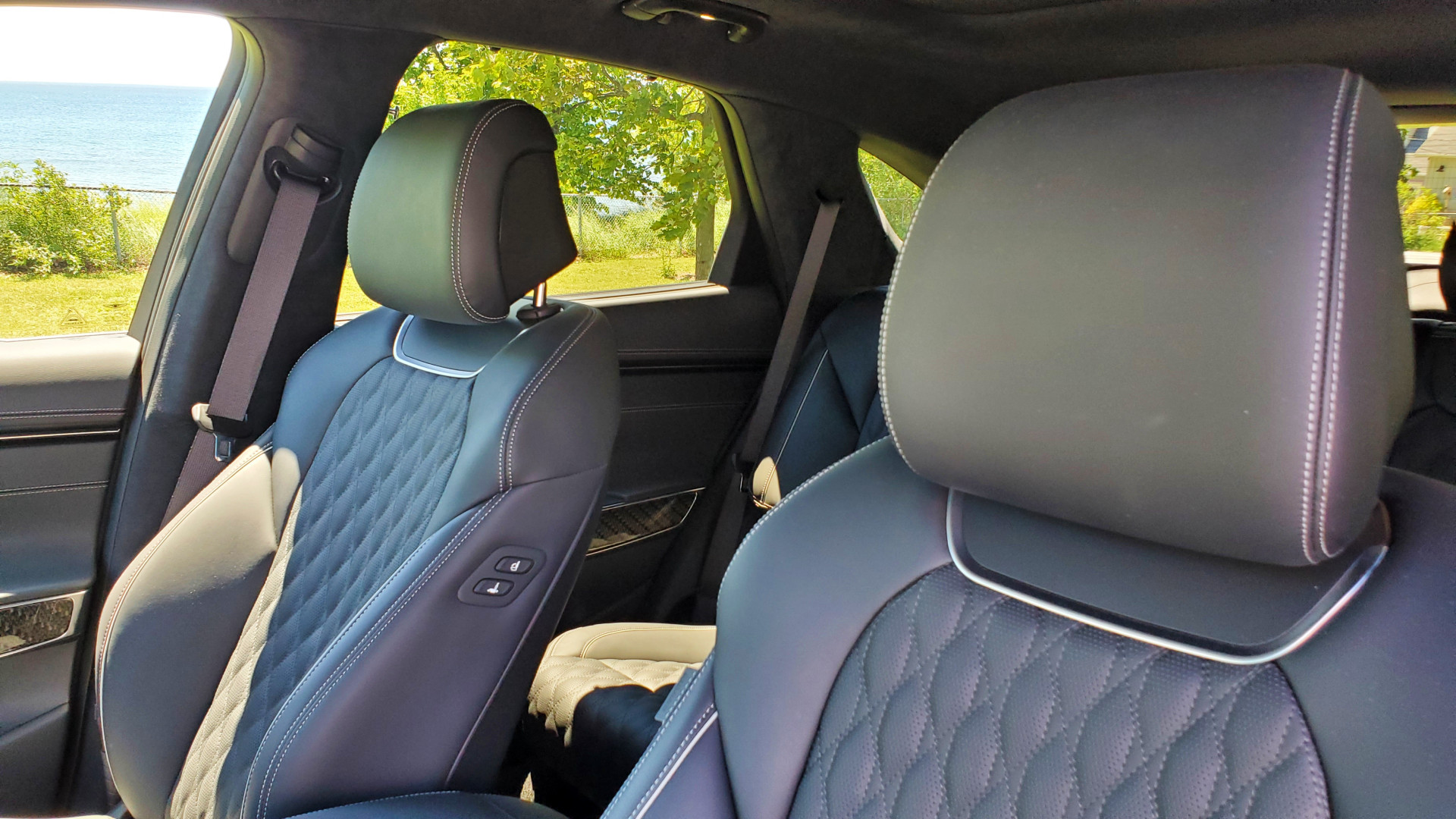 In sum, the GV70 feels like a finely calibrated product where every detail was pored over meticulously, both in terms of design intent and execution. Its cabin is meant for luxuriating, it’s drive can be as mild or as spicy as you like, you can trick it out in over 100 interior and exterior colour combinations (including four exterior matte finishes!), plus its offers plenty of space for people and cargo and it comes packed to the gills with advanced safety tech.

Perhaps nothing sums up the GV70 better than a slide near the top of the product presentation Genesis sent me that states in all caps: GV70 is the most important product in our history. 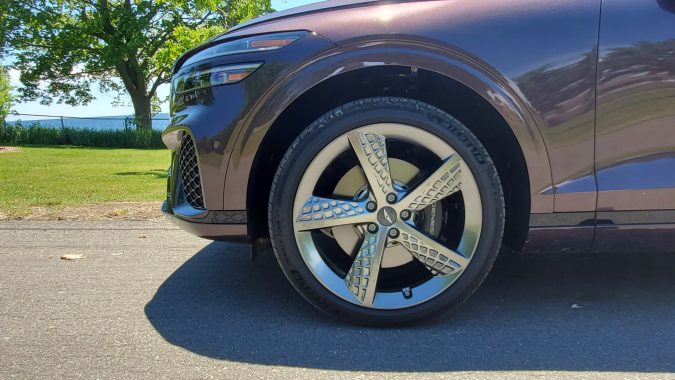 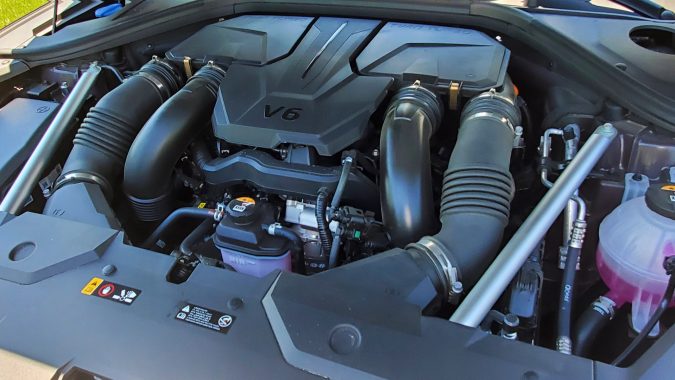 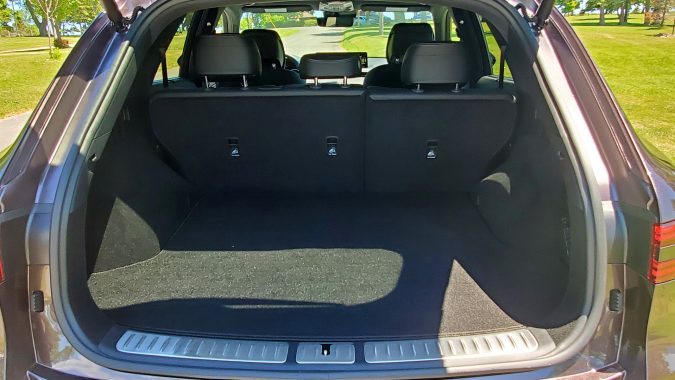 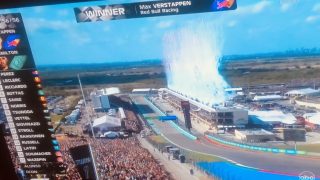 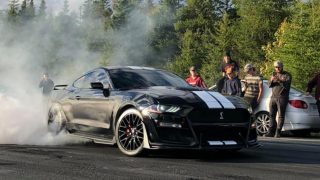 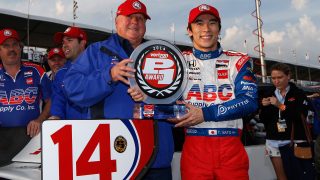