Jordan, ON – Just like music and fashion are cyclical and the way that what was once considered old becomes new again, vehicle nameplate revivals have become the latest automotive trend along with big grilles and fake rear diffusers.

These revivals can go one of two ways: a faithful reimagining that brings the essence of the past model into the future, think Ford Bronco (which we’ve just driven elsewhere on these digital pages), or a marketing play where the new model bears little resemblance in design or substance to the one from the past. Chevy Blazer, I’m looking at you.

The new Jeep Wagoneer and Grand Wagoneer full-size SUVs fall somewhere in between.

This time around you won’t find any faux wood grain on the body panels but the aftermarket will probably take care of that in short order.

The original Wagoneer debuted in 1963 and enjoyed a 29-year production run before it was discontinued due to rising fuel prices and poor sales.

Regarded as the original luxury 4×4, it could be had with four doors at a time when most of its competition wore just 2. Amenities like power steering, power brakes, and even a power tailgate were unheard of in a “truck”. Add in V8 power, and a large towing capacity and families could enjoy something a bit more capable and comfortable than the humble station wagon, the OG road tripper.

What is the Jeep Grand Wagoneer?

Employing a heavily modified chassis taken from the Ram pickup, the Wagoneer, and the more heavily optioned and more luxurious Grand Wagoneer, the focus of this review, are full-size three-row SUVs that can seat 7 or 8 people depending on if you spec the middle row with a bench seat or captain’s chairs.

Despite a rather large price gulf, both the Wagoneer and Grand Wagoneer ride on the exact same chassis and are the same size. 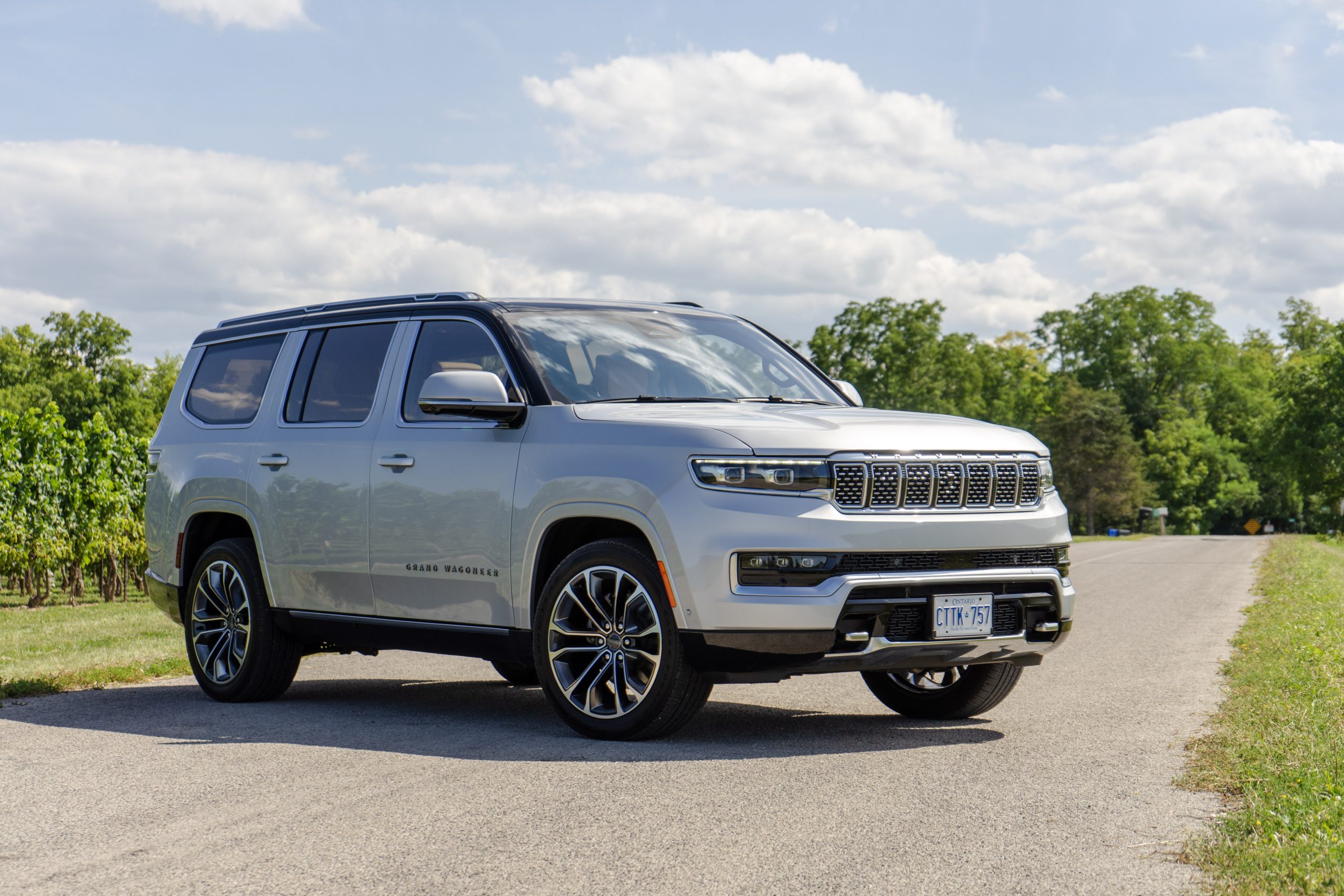 The Grand Wagoneer gets snazzier trim on the outside, a more prominent grille, upgraded LED lighting, copper accents, and more chrome. Inside up to 7 screens with nearly 2 metres of viewing area bathe the cabin in an LCD glow, while premium Palermo leather upholstery on the seats and the dashboard, and genuine walnut wood trim provide an upscale ambiance.

There are three 4×4 systems available but the Grand Wagoneer gets the best one: Quadra-Drive II with an active low range and an electronic limited-slip differential. Quadra-lift air suspension is also standard and will allow up to 10 inches of ground clearance in its most jacked-up setting but can also drop down low enough to make getting in and out easier.

Both Wagoneers are V8 powered. The Grand Wagoneer comes exclusively with a 6.4-L V8 that produces 471 hp and 455 lb-ft of torque mated to an 8-speed automatic.

How much does it cost?

It will go head to head with the Cadillac Escalade, and the Lincoln Navigator but also plays in the same field as the Mercedes GLS, BMW X7, and the Range Rover. 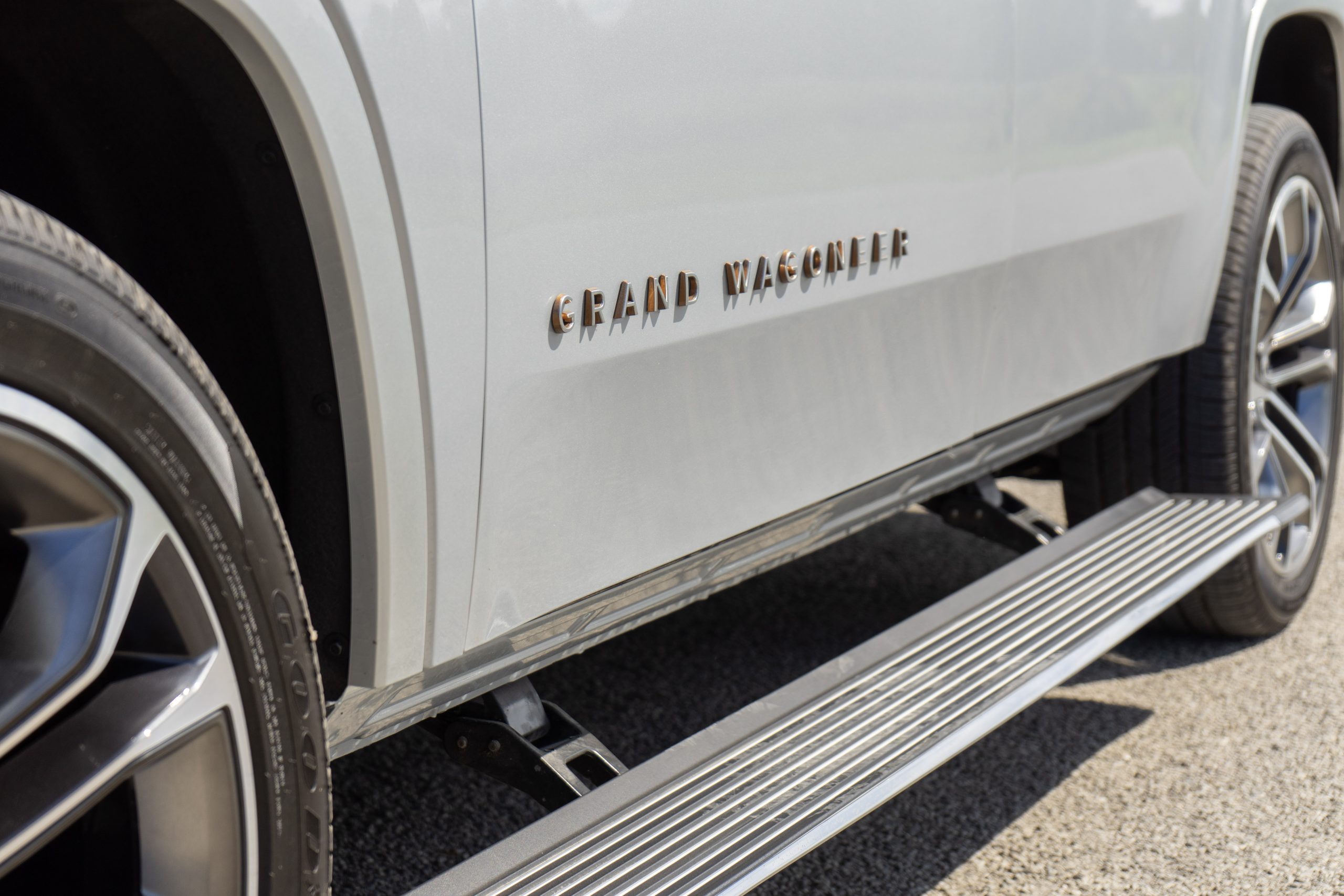 The Wagoneer starts at a much lower $69,995, swelling to $85,995 for a Series III model, and will compete with the Tahoe, Suburban, Yukon trifecta from GM, and the Ford Expedition. Standard safety kit and driver assists include adaptive cruise control, blind-spot monitoring with rear cross-traffic alert, active lane management, collision warning with active braking, and more.

Our fully tarted up Grand Wagoneer came with even more like pedestrian and large animal detection, a night vision system, and a 360-degree camera.

Will go off-road but it’s not trail rated

That famous “Trail-Rated” badge will not grace the flanks of either Wagoneer and that’s probably a good thing, as I can’t imagine anyone wanting to take one of these leather stuffed behemoths rock crawling. On the other hand, I’m sure there’s a sizeable community of hardcore Jeep fans that would love to see how “stuck” they could get one of these and then post a video of it to Youtube. It’ll happen.

If you do care about this kind of stuff, the Grand Wagoneer has an approach angle of 25 degrees and a departure angle of 24 degrees, and will ford up to 60 cm of water. It also comes with the Selec-Terrain management system that can cycle between Rock, Sand/Mud, Snow, Sport, and Auto. There are also 5 preset ride heights to choose from and Hill Descent Control. 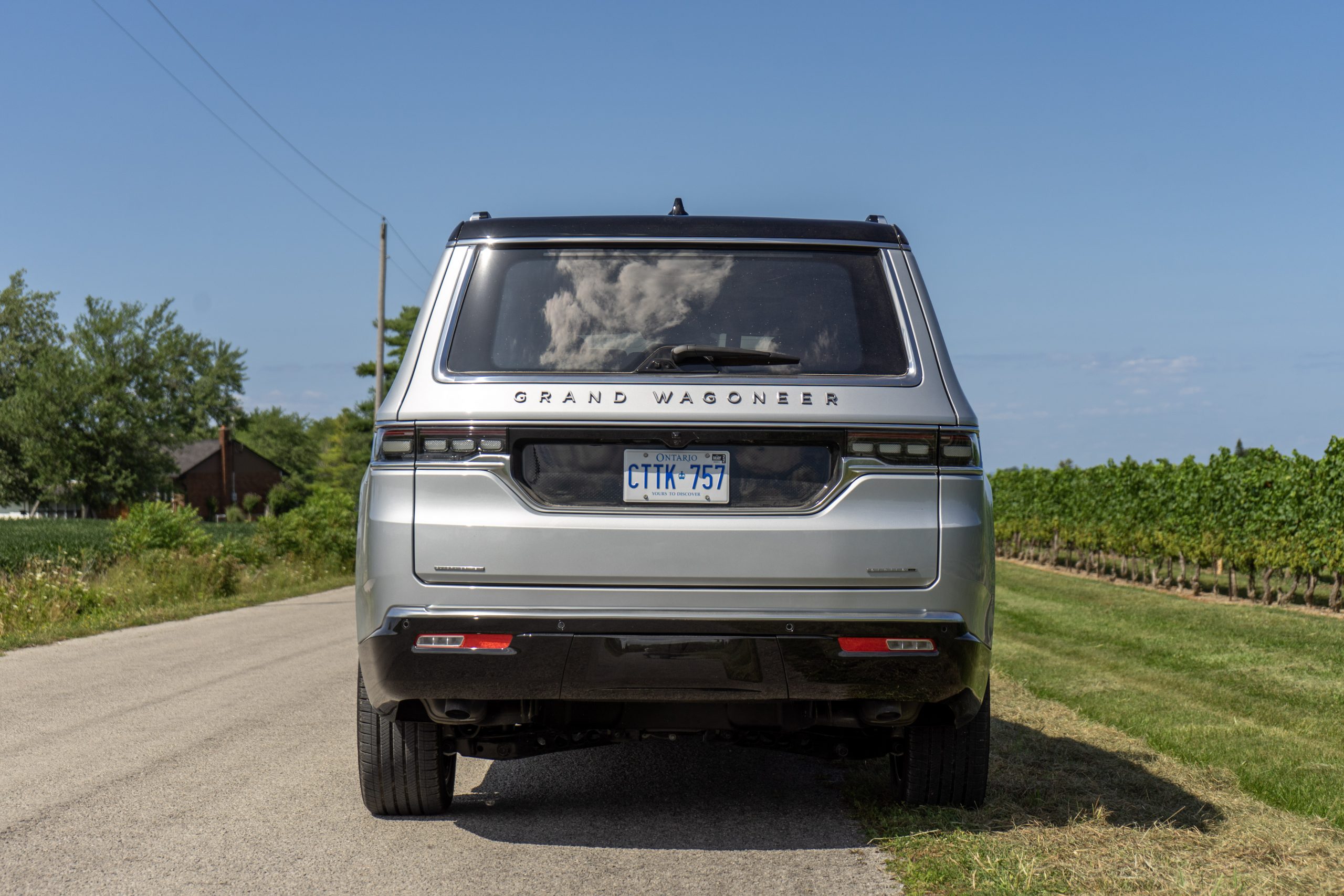 Spend any bit of time in the Grand Wagoneer and you’re going to want to show it to your kids. If you don’t have any kids, you’re probably going to want some.

At a time when air travel still comes with risks, domestic vacations are where it’s at, and the humble road trip has never seen a revival like this before.

I spot many more campers and travel trailers hitched to the back of vehicles these days and it might just be a sign of the times, and equipped with the heavy-duty towing package which mine was, the Grand Wagoneer can tow up to 4468 kg or nearly 10,000 lbs. for those of you that prefer imperial.

But the kids aren’t going to care about that. What they will care about are the 11 USB ports split between all three rows, and the easy-to-reach dual rear entertainment screens that have the first example of Amazon Fire integration so they can access Prime Video, Netflix, and just about any app, game, or website they want to visit. 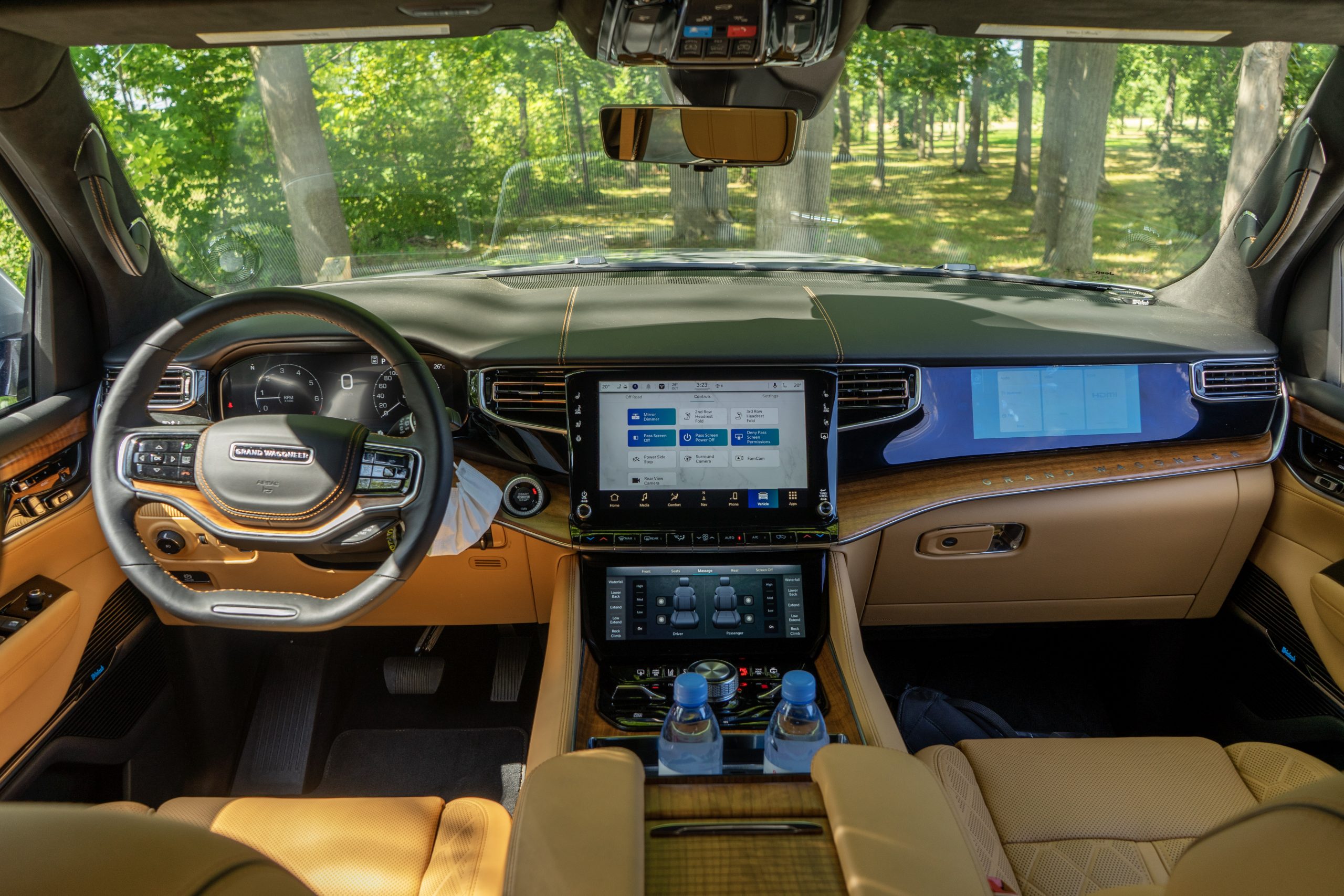 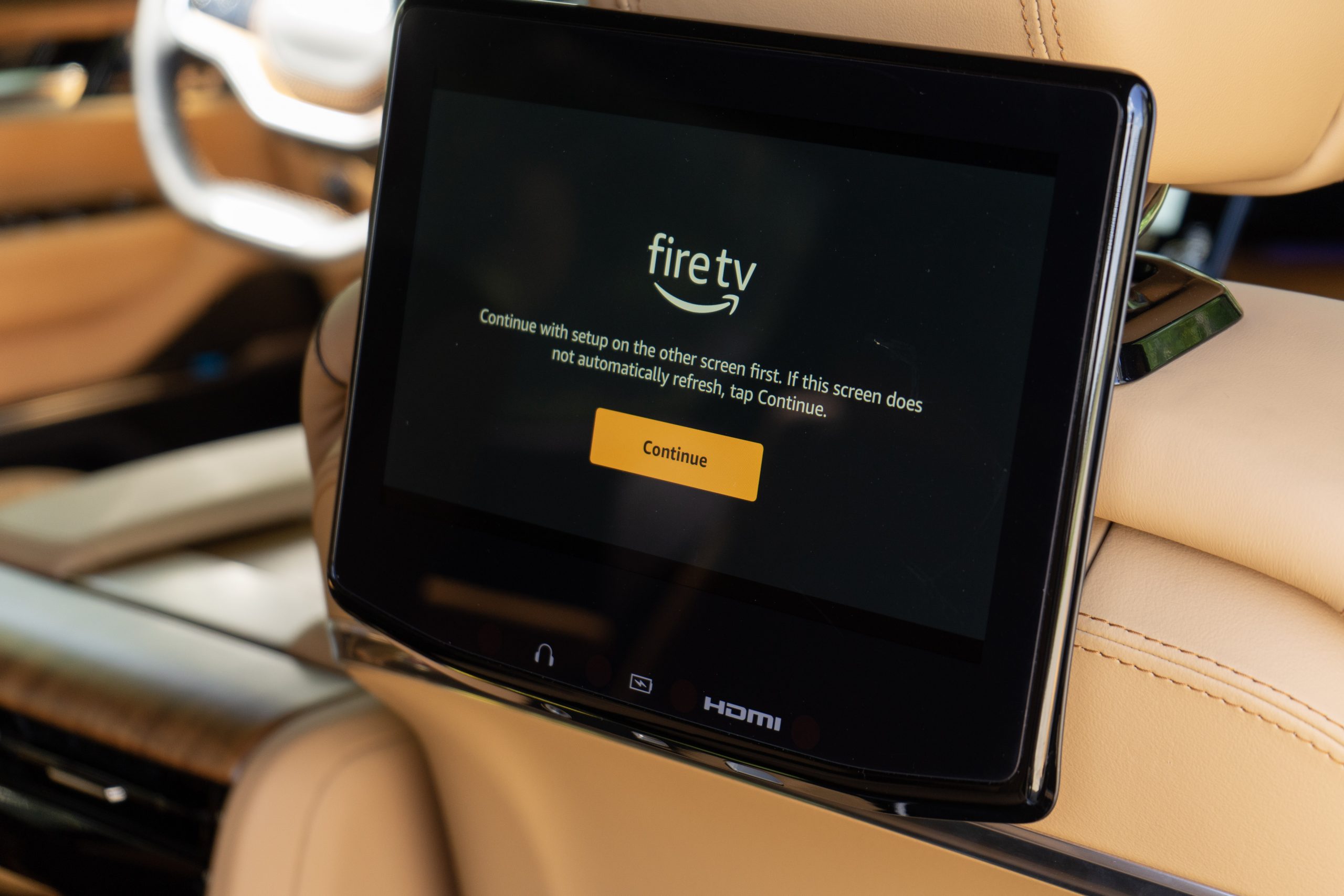 With the available passenger screen in the front row, you can also, thankfully, control what they watch. That screen also allows the passenger access to Fam cam, using a little ceiling-mounted camera to spy on the little whippersnappers at will.

You can also mirror your phone on the rear screens and the passenger screen if equipped, either with a cable or wirelessly if you have an Android.

They will not be bored, that’s a given. It’s an impressive amount of technology that they’ve managed to cram in, bordering on excessive, truly.

And if there was a total screen area war going on, Jeep likely just won.

I imagine the cockpit of a commercial jetliner isn’t too far off. It’s a good thing, then, that they’ve made it very easy to quickly turn off all the screens if you just need a Zen moment or something. 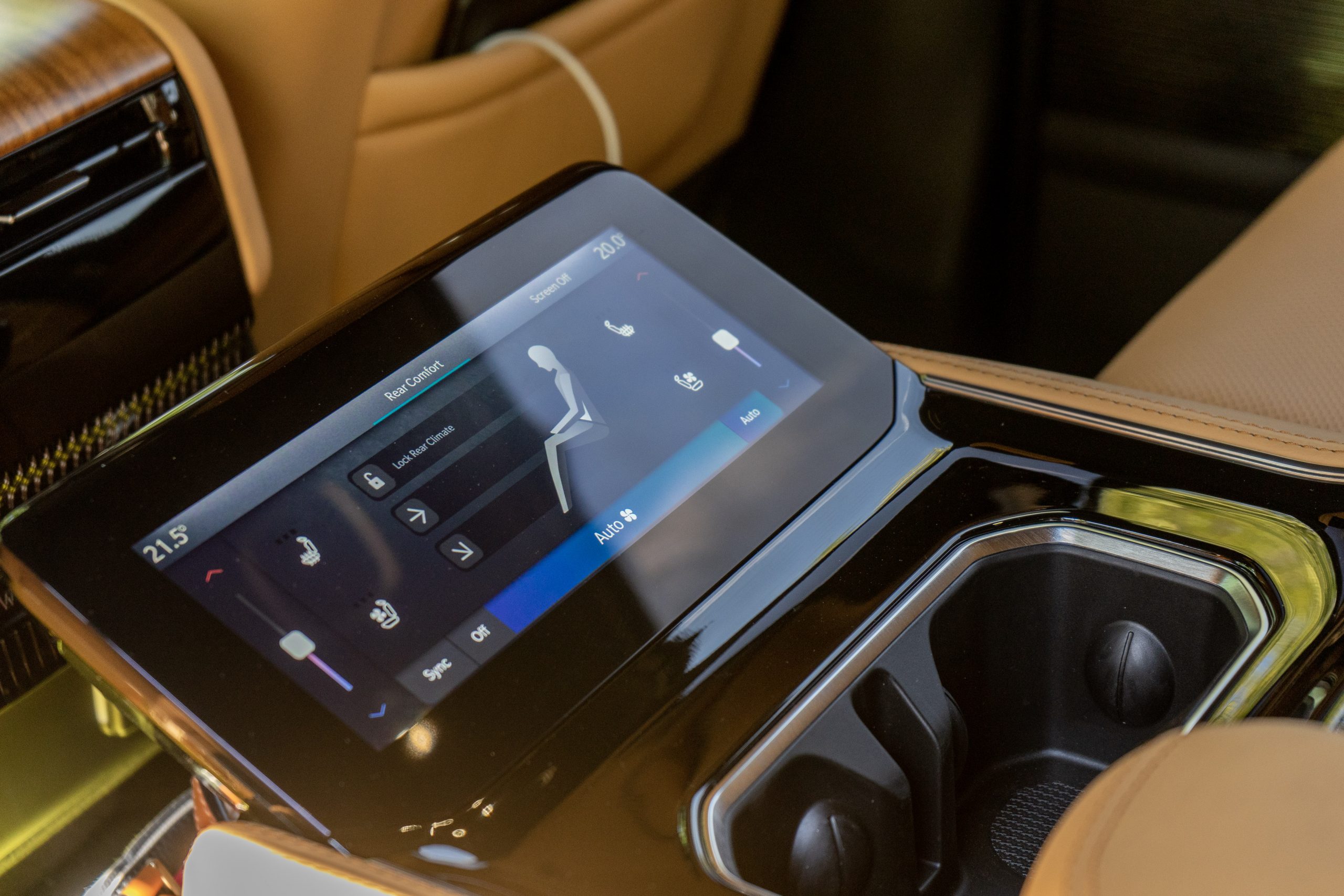 Driving the Grand Wagoneer feels like what you’d expect from a truck based SUV of this size. They’re big and they drive big. The experience is very similar to the Lincoln Navigator and the Cadillac Escalade, and if you’ve spent any time with either of those you’ll have a good idea of what this is like behind the wheel.

It’s important to keep in mind that I was driving a pre-production unit that might not have had all its marbles in a row but from where I was sitting it didn’t seem to exhibit any loose threads.

The steering isn’t overly light which it can be on these types of cars and that’s a good thing. Once at speed the Grand Wagoneer is reasonably maneuverable and feels a bit tighter and less tippy than the Navigator. None of these vehicles are going to corner with any grace, and if you keep that in mind you’ll be just fine with the way this drives.

Thanks to the standard air suspension the ride is smooth and serene. Acoustic glass and noise cancellation keep the interior whisper-quiet even at highway speeds. It’s so quiet that you won’t realize how quickly you’re actually moving until you look at the speedometer.

The 6.4-L V8 is a smooth and torquey operator and remains quiet even in sport mode, probably on purpose, but the gearhead in me would have liked to hear a bit of that burble come through. Power is adequate and can move this big vehicle with urgency but the transmission exhibited some rough shifts on kickdown. 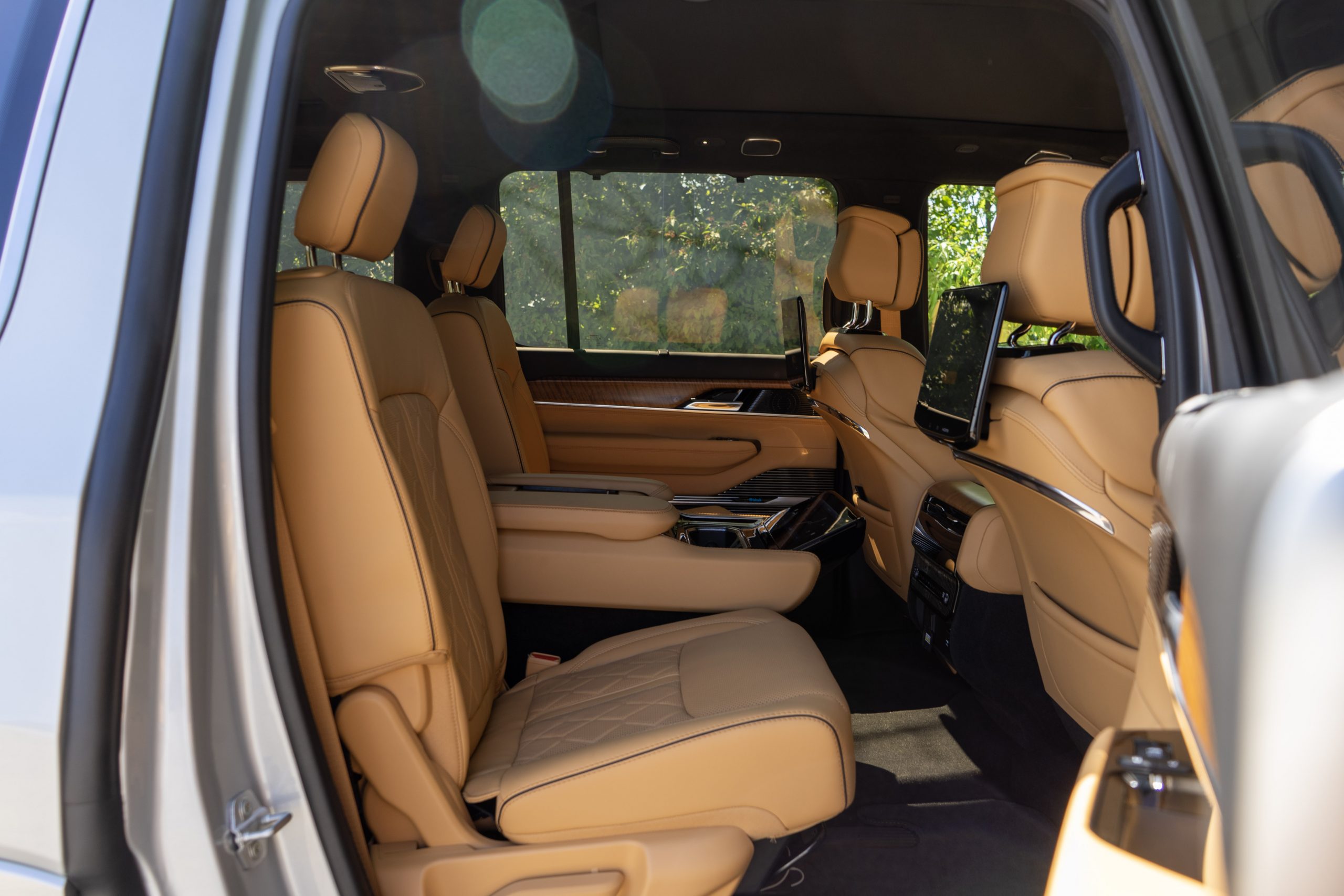 The quality of the leather, the stitching, and the materials, in general, all felt top-notch, a level up from what you find in the Navigator. There’s little to complain about, except in direct sunlight the driver display and passenger screen get washed out quite a bit making it hard to read vital instruments. Hopefully, this is something that gets addressed.

The Grand Wagoneer is the revival of the original luxury SUV, so it seems like Jeep wanted to go all out and that’s exactly what they did. It has the same spirit and even has a few design cues that help tie the old and new together but some of the simplicity and allure of the original is lost. But that might just be my love of old things talking.

Order books are open now, and the Wagoneer should start arriving at select Jeep dealers by the time you read this. 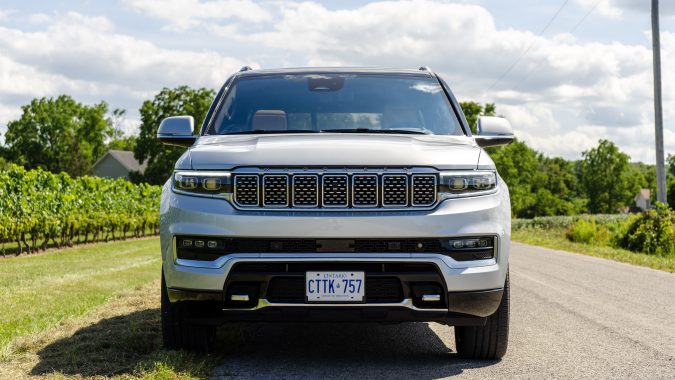 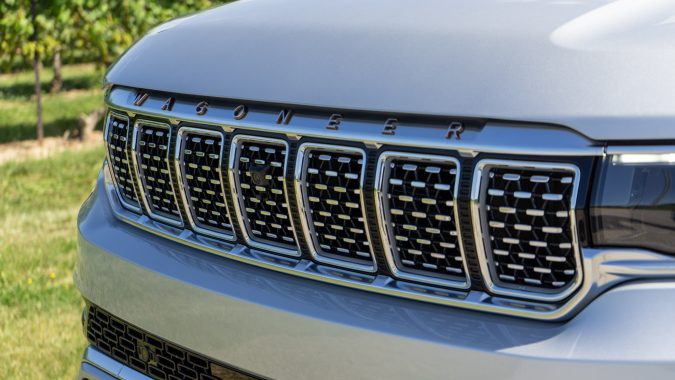 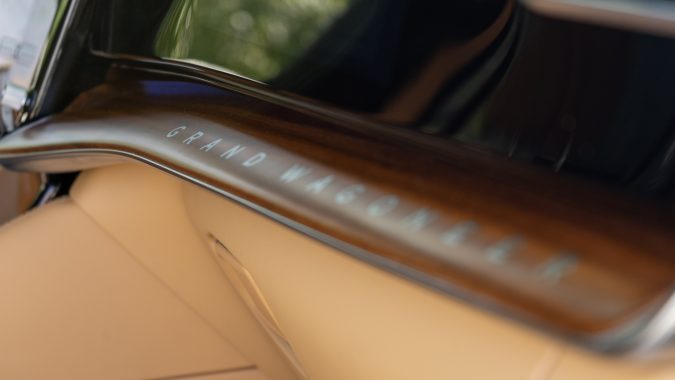 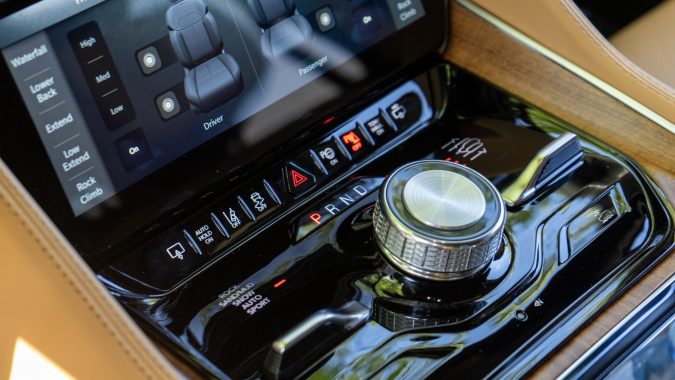 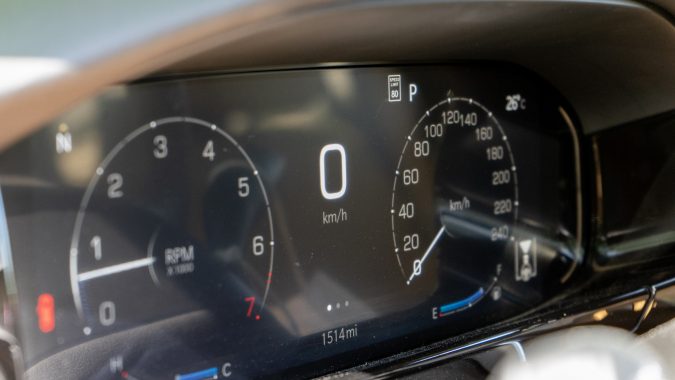 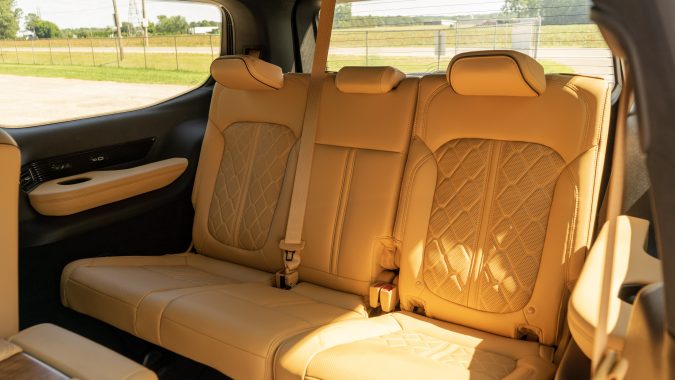 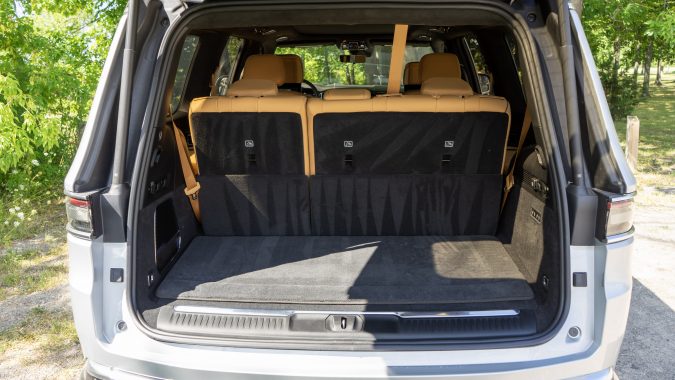 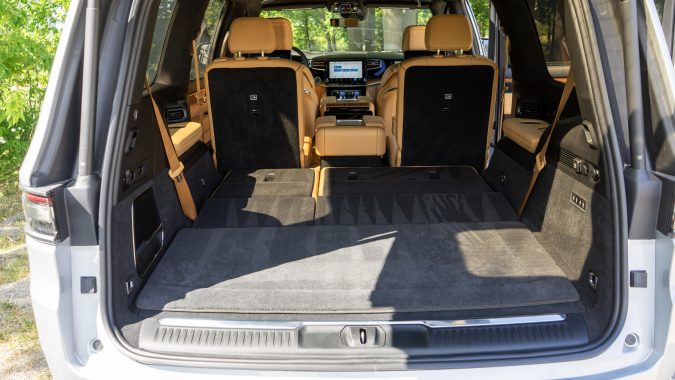 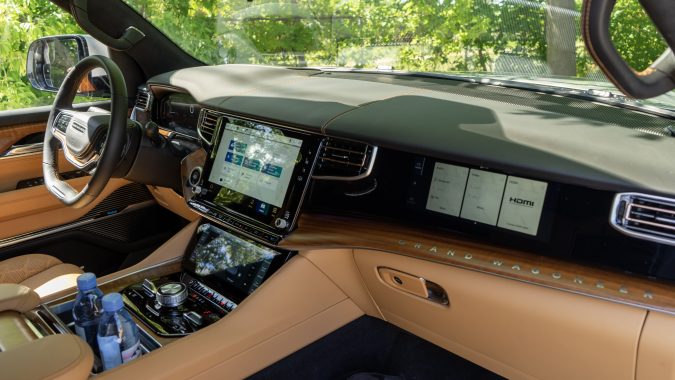 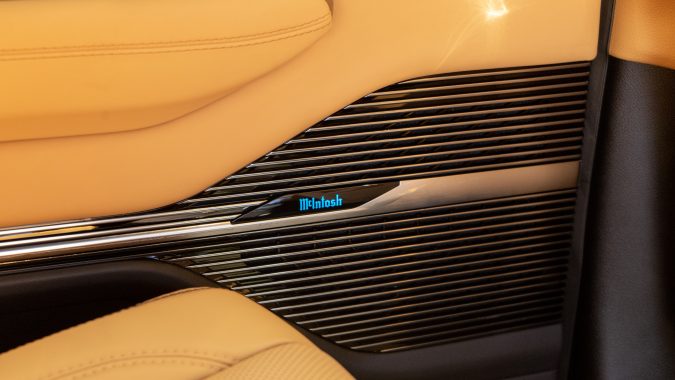 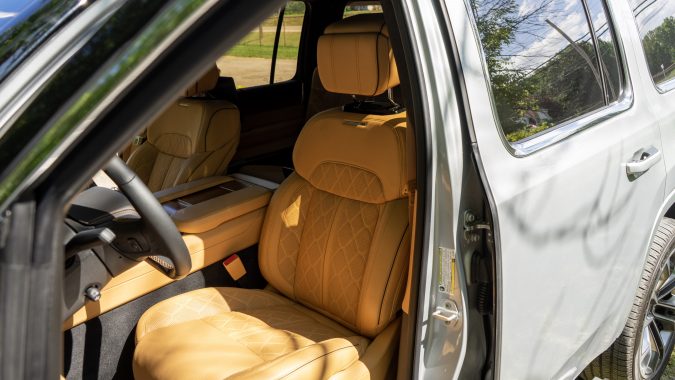 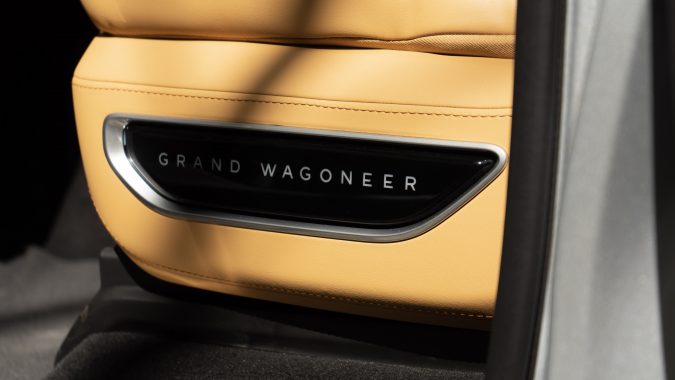