Not an electric S, this is something entirely different.

SAN FRANCISCO – The Mercedes-EQ EQS 580 (that’s going to take time to get used to saying) isn’t an electric S-Class, and if that’s what you were hoping for then you might – like I was – be in for a surprise. This is the company’s flagship electric model, but the automaker has also taken the opportunity to throw away decades of conservative design and engineering. Not a sedan for retirement-age CEOs, this one has a different audience planned. If you’re wondering who that target is, look no further than the location Mercedes has chosen for this first drive. The tech and money monster that is Silicon Valley.

It’s clear as soon as you walk up to the EQS. Before the engraved and flush-mount door handles pop out to greet you, the styling of this is much closer to CLS than S. Mercedes calls it single-bow, referring to the roofline that runs all the way down into the wheel arches at the front of this hatchback. Right, this is a flagship hatchback, once again a novel approach for a brand with a very old-fashioned image. 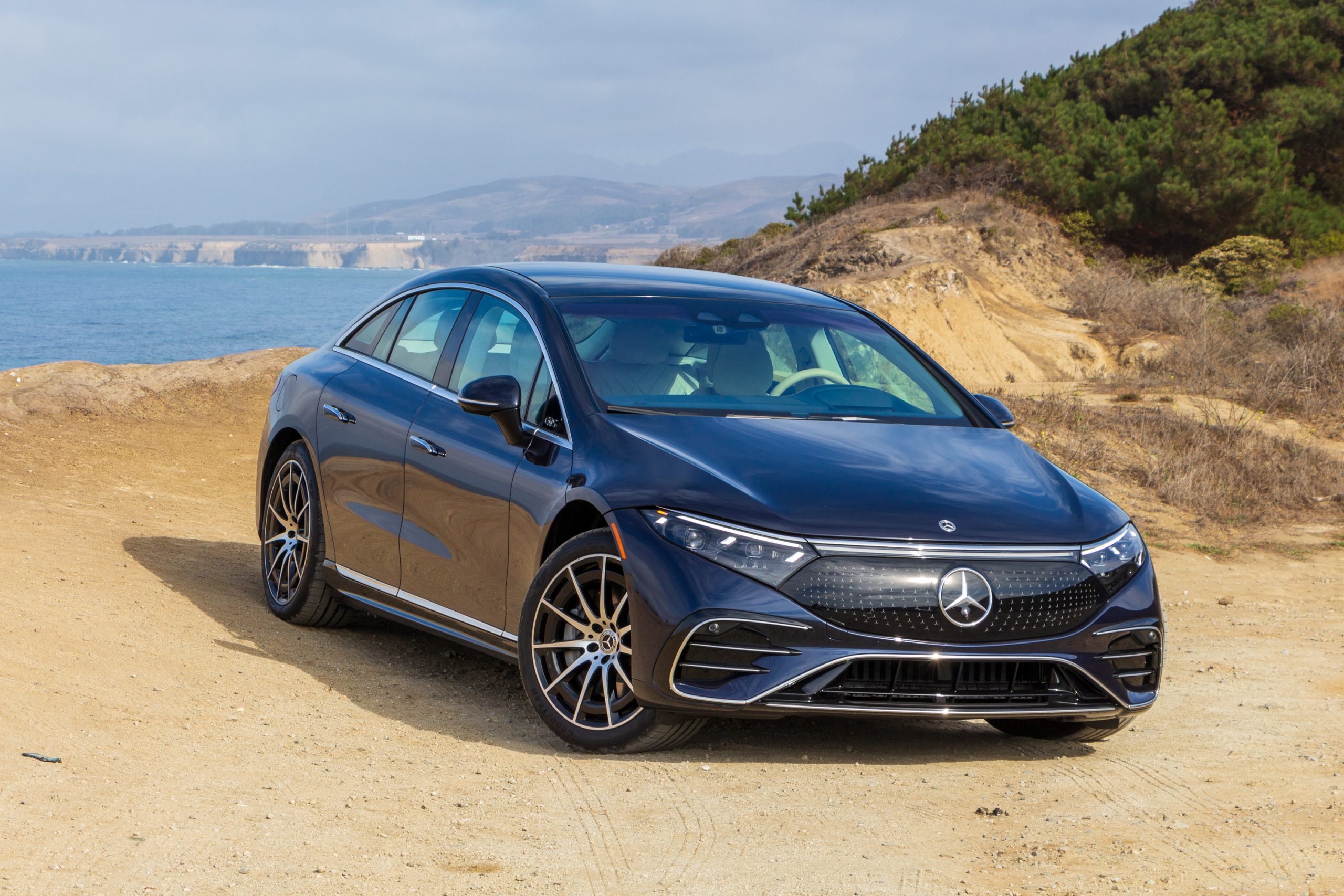 Step inside and while the 56-inch wide combination of displays Mercedes calls the Hyperscreen will catch your eye first, there is an even better feature in this one. Pillows.

The pillows attached to the headrests of this car are soft enough that I was seriously thinking about a nap instead of a drive early on a chilly San Francisco Bay morning. If the one from this car disappears, I swear it wasn’t me.

Mercedes’ standard Hyperscreen gives the driver an extra-large navigation display that can show points of interest and a satellite map view with impressive quickness. The voice commands respond well to your actual questions, and integration of CarPlay and Android Auto is excellent on the over-the-air-updatable cloud-based system. The two pop up full-size on the display, though the built-in nav is easily better than either of the smartphone apps. The front passenger has a 12.3-inch screen to pick the music or set the nav as well as control climate and massage features, and two rear screens are available. 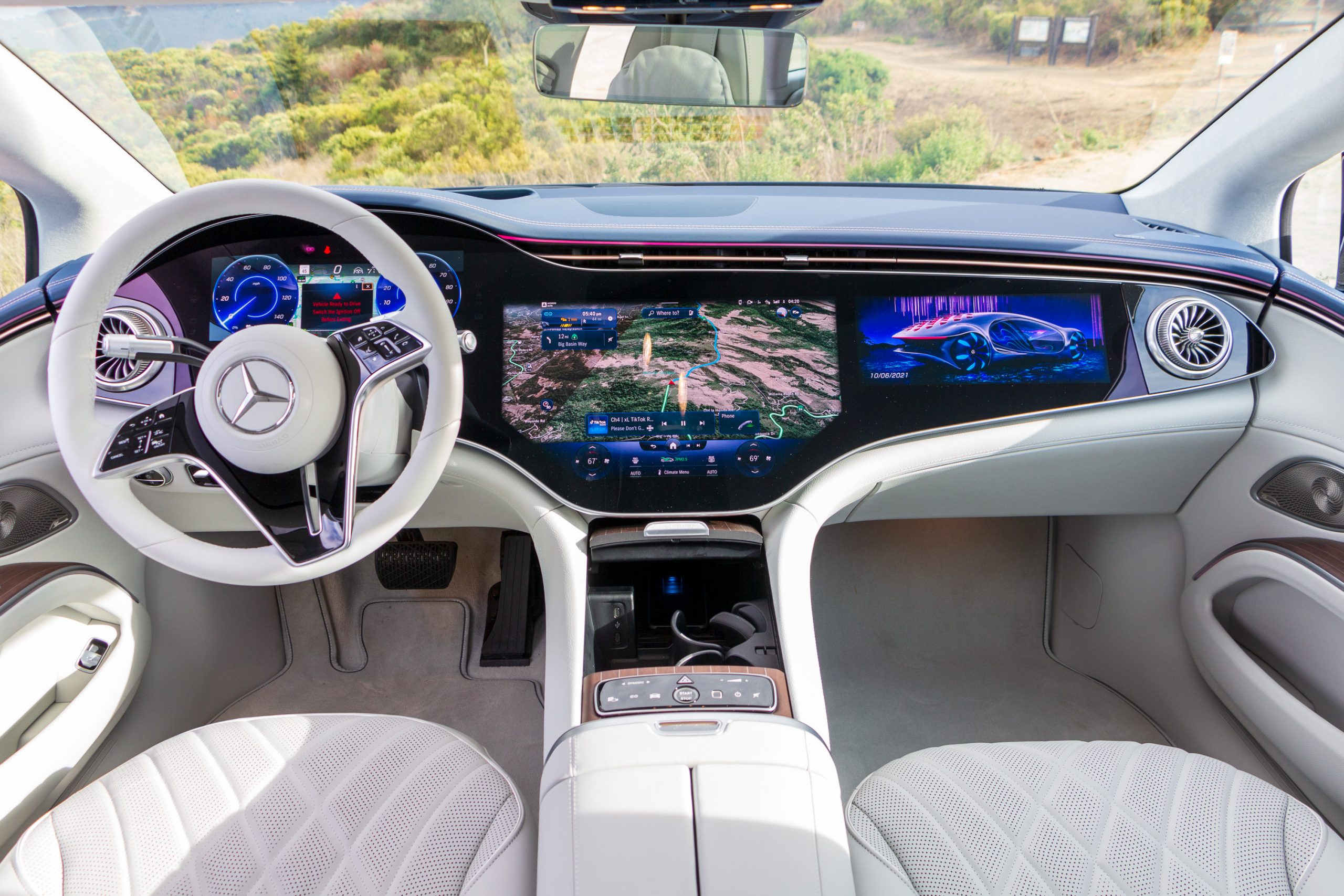 Nearly every control, even the sunroof, is a haptic feedback and/or touch button. All work well, but those craving a volume knob will be disappointed. Ask the assistant, instead.

On top of the excellent Benz augmented reality nav directions showing you exactly where to turn, the EQS has a head-up display that gives you directions, speed, and arrows to help you do the same. Though I found it didn’t adjust quickly enough for back-to-back city street changes, it was easy to use in all other situations.

The tech inside is exceptional, but the size inside is not. This isn’t as big as an S-Class, and with the roofline as sleek as it is, headroom is at a premium. I found the rear seating on the narrow side too. This is a car for driving, not for being driven in, so that is not likely the problem it would be for the more traditional sedan. The electric battery and EQ-specific platform make getting in and out easy, a nice touch. 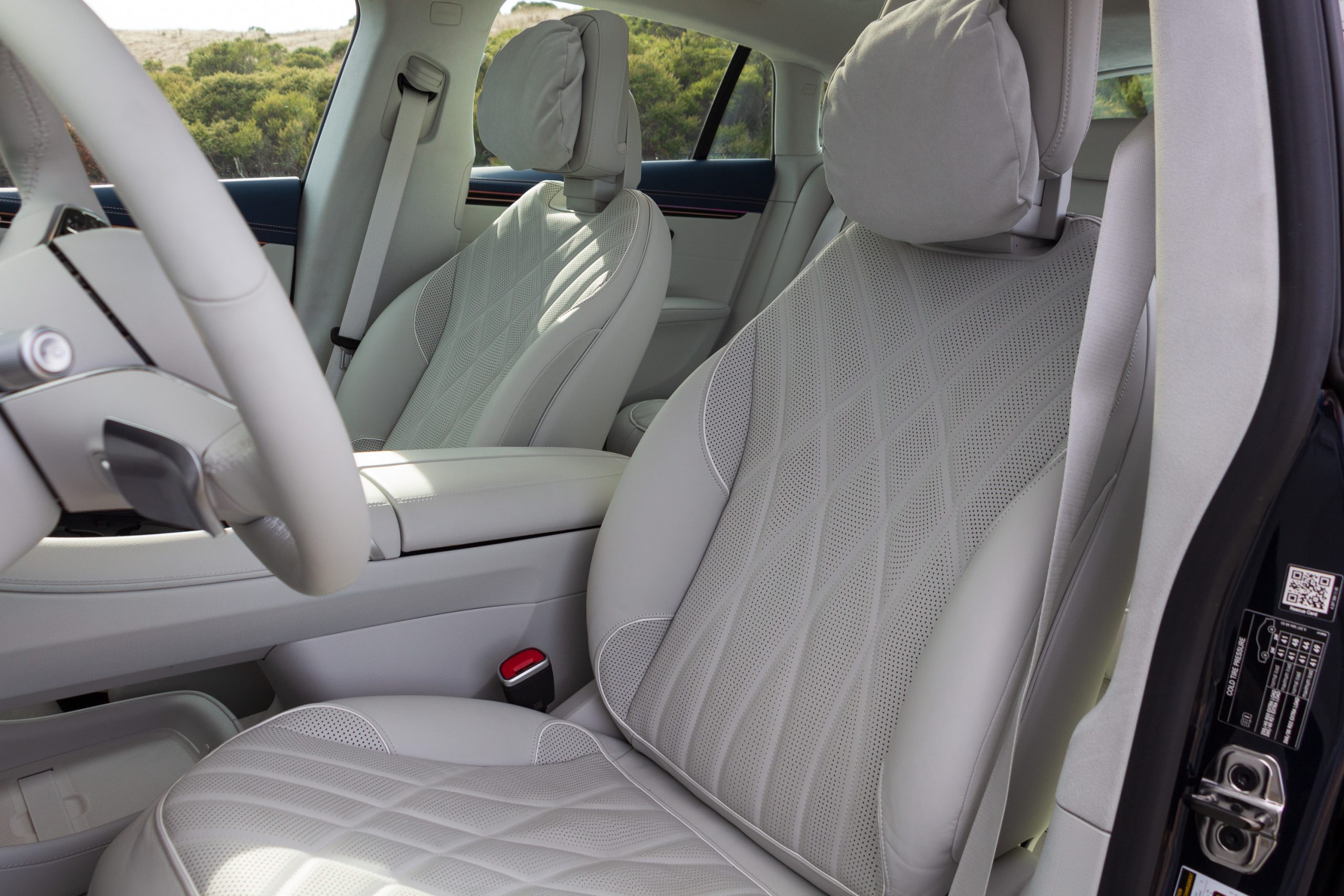 It doesn’t matter how good the tech on the inside is, though. This is an EV, one of Merc’s first serious ones, and driveline is everything for an EV. Other markets get a less powerful model, but Canada will have just one: The EQS 580 4Matic, offering one motor at each end, 516 hp, 630 lb-ft, and all-wheel drive. It’s not the crushing power of the EV gorilla (you know who), but we still have a hard time calling 516 hp slow. Especially when it will get you from zero to a stunting ticket in about seven seconds on the highway. Punch it at any speed and before you have time to think, the car is gone. If that’s not enough power, there’s an AMG coming with even more.

A battery pack offering 107.8 kWh means an EPA estimated range of 547 km, just a few km shy of a Tesla Model S Performance on the big wheels. Our test route was heavy on the mountain roads southwest of the Bay Area, with loads of hard acceleration, but the top range figure still seemed easily attainable. Active regeneration slows the car harder for bends and intersections (and traffic), and is adjustable to two levels and off.

Charging on a Level 3 station happens at up to 200 kW, with Mercedes saying it has balanced temperature management to let it stay at higher charge rates for more time for a quicker top-up. By the end of this year, EQS customers will be able to plug and charge, meaning no more fussing with apps to get the party started at the station. 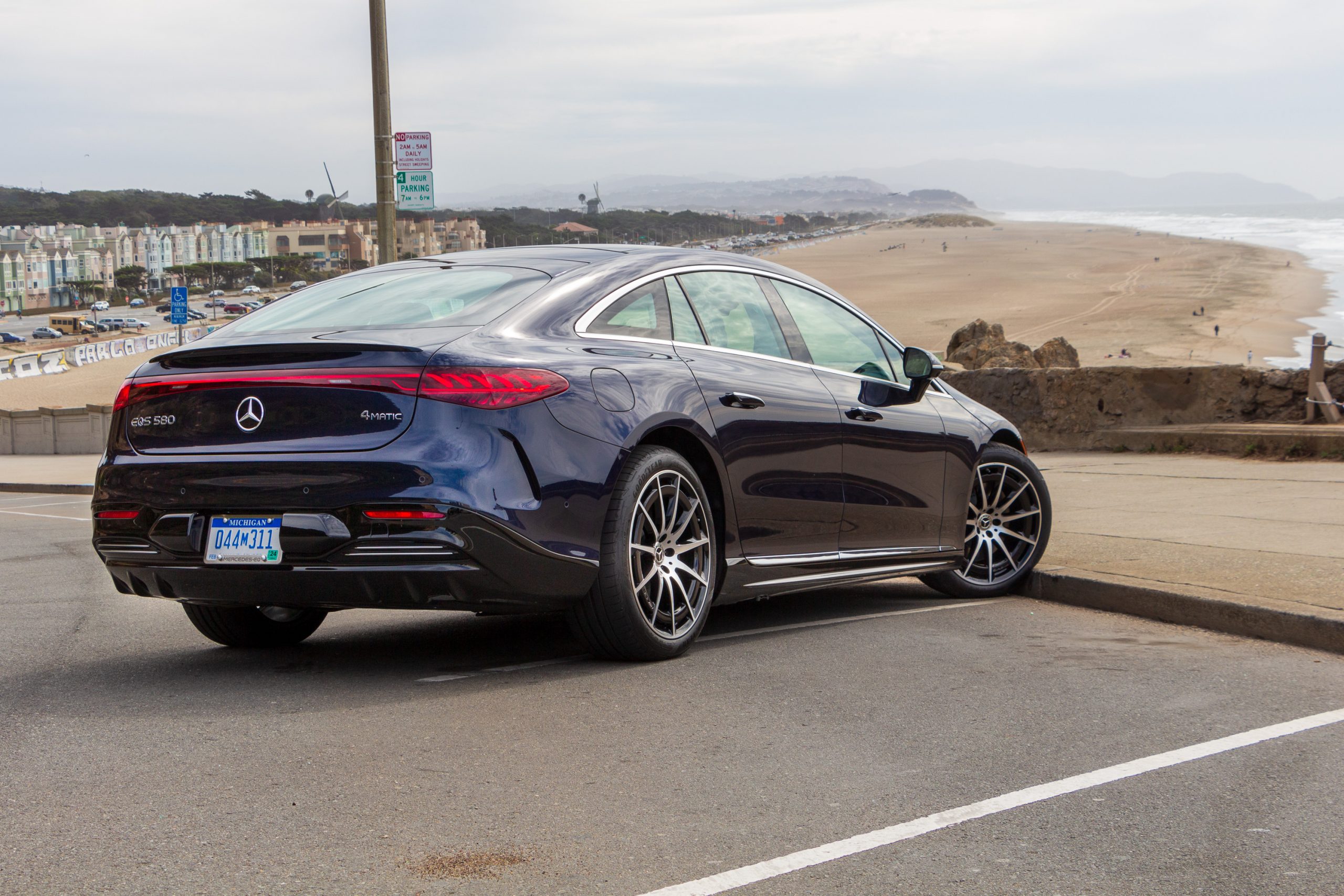 On the highway, the car is nearly silent, with the incredibly low 0.20 coefficient of drag helping out. In slower highway driving, though, my tester had a high-pitched whine from zero until about 20 percent of max power according to the dash that was quite irritating in such a quiet vehicle. Turn up the Burmester audio system and everything else disappears.

Despite the Airmatic air suspension and continuously adjustable dampers, the car felt just on the floaty side of the spectrum on the highway. That feeling didn’t worsen when then roads got bumpy or twisty, though, and the car handled bumpy switchbacks and off-camber impacts by basically ignoring them. You won’t forget this is a hefty vehicle, but it doesn’t hold the car back. This car also had the 10-degree rear steer which gave it a turning circle more like a compact than a full-size sedan.

Mercedes says the EQ will show up at dealers later this year, and announced pricing to start at $144,200. That’s only about a grand more than the gas S 580, and while it’s hard to call a car that pricey a bargain, it is definitely lower than expected. 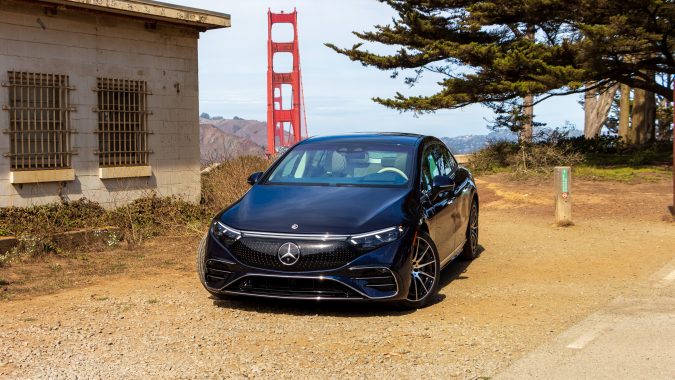 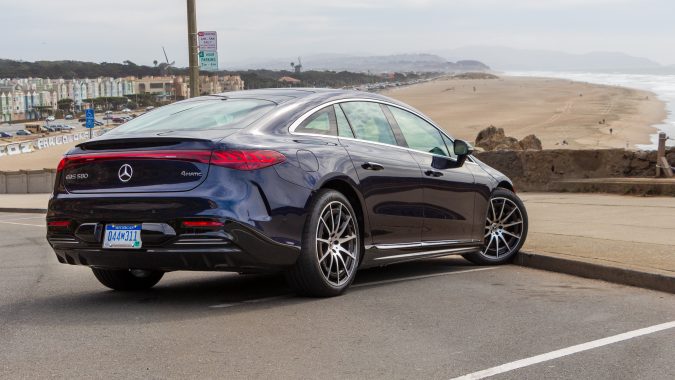 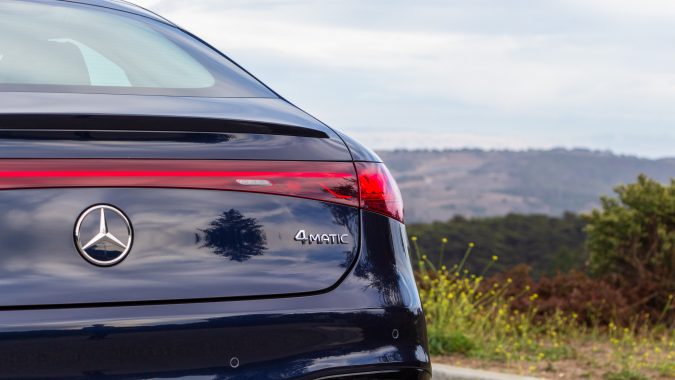 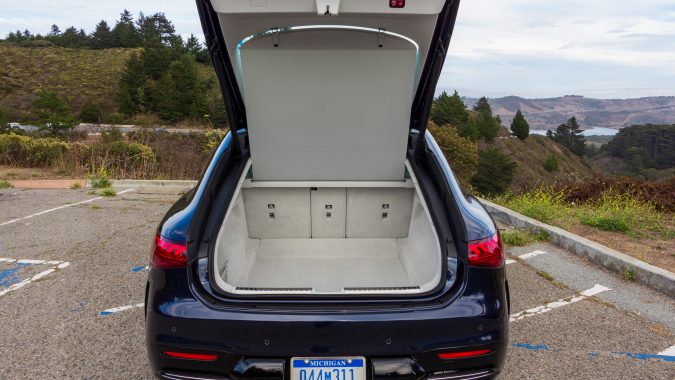 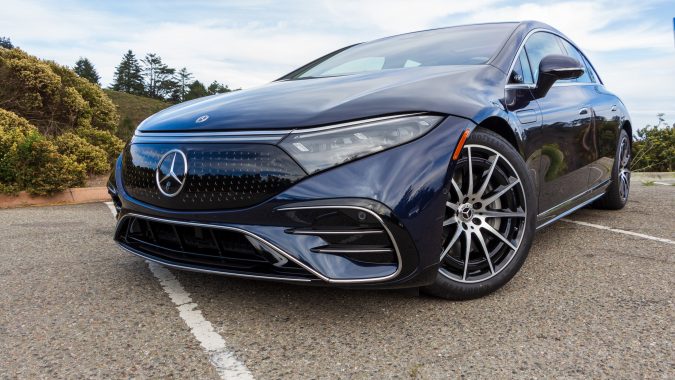 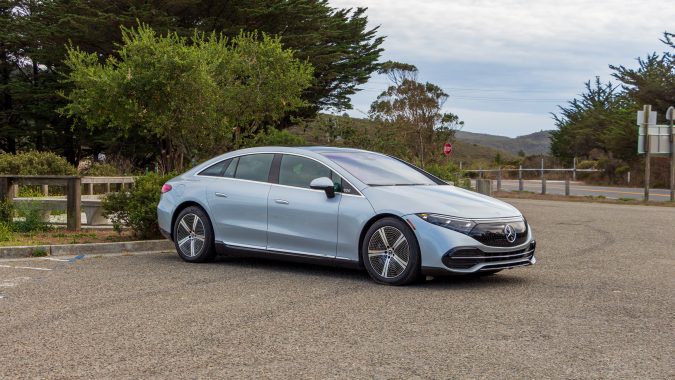 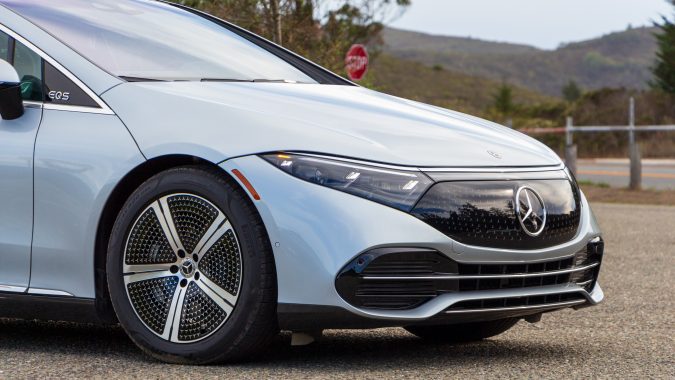 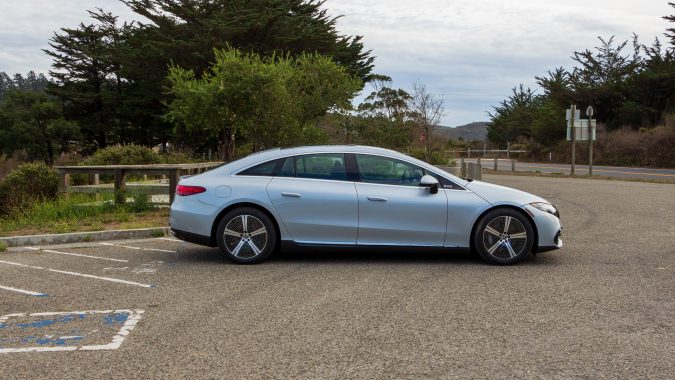 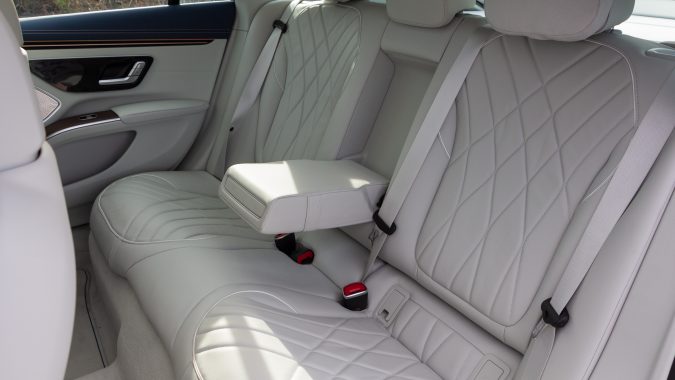 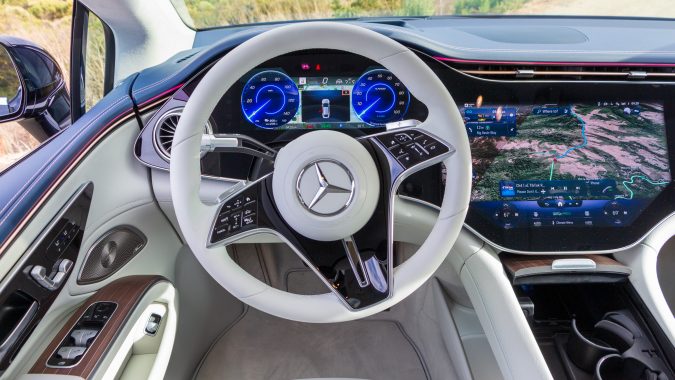 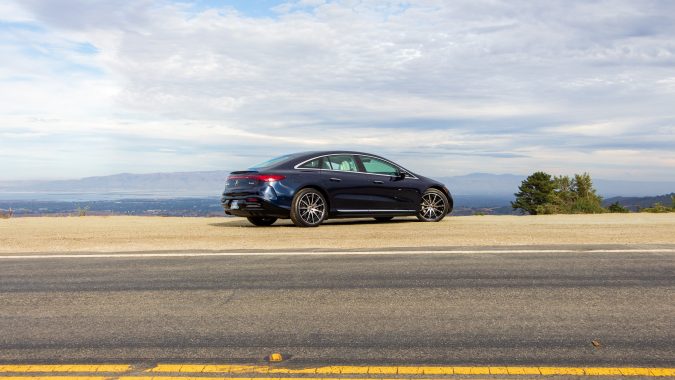 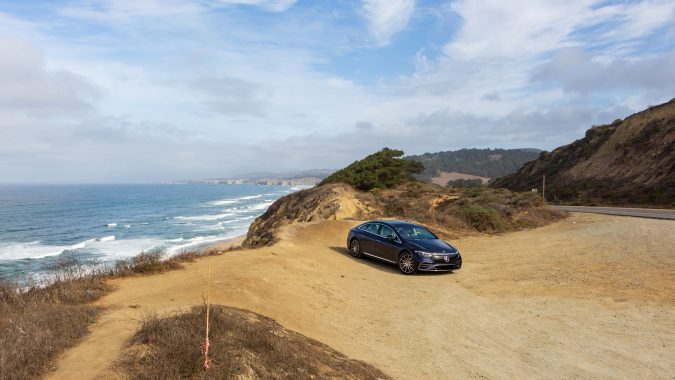 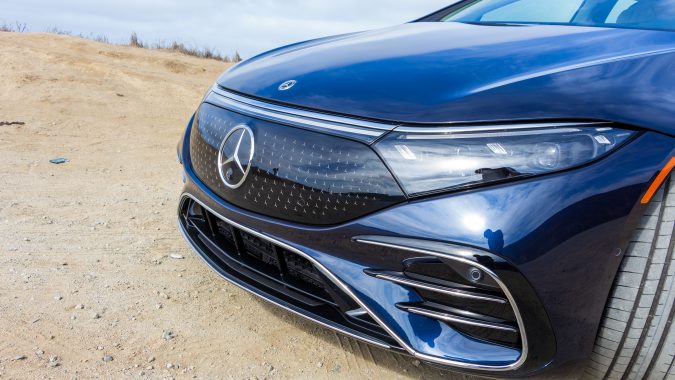