Ford has an Edge in family transport

The new Edge, now in the second year of its second generation, looks stronger and more athletic, with harder edges and crisper character lines.

No matter how you describe the 2016 Ford Edge, this mid-size crossover isn’t one to go unnoticed.

Especially the one I’d be testing for the week, resplendent in Ruby Red Tricoat Metallic – a $450 option that is well worth the price.

The first generation model was nice enough, but bland. The new Edge, now in the second year of its second generation, looks stronger and more athletic, with harder edges and crisper character lines.

The front window appears more steeply raked, as does the rear, which includes a thicker C-pillar and rear spoiler. The hood rises high over a beefy hexagonal grille, cutting the wind like a fist.

The new vehicle is also longer and more spacious than its predecessor, built on the same global platform as the mid-size Fusion sedan. Engineers have used more high strength steel, adding to its rigidity and lessening both road noise and vibrations.

I could sense its sturdiness when driving our late-winter backroads. Calling many of them “uneven” is an understatement, but the Edge handled these without flexing or twisting. Potholes and cracks were absorbed nicely, and the passenger cabin remained comfortable – and quiet.

But that doesn’t mean ride is mushy. 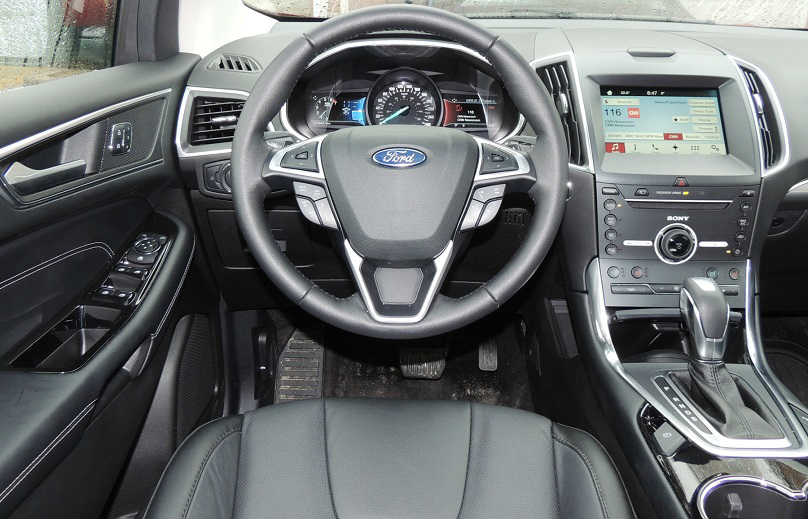 The independent front/rear suspension has been tuned for more responsive handling, aided by curve control and roll stability control. No, the Edge won’t rock your world when carving corners – and you wouldn’t buy one for that purpose anyway. But body roll is less than you’d expect.

Still, for those who want something a little more engaging, there’s Sport trim with firmer damping, not to mention loads more power.

And there are three powertrains, all of which include a six-speed automatic with sequential manual shift. It can be set to regular drive or “sport”, with the latter offering a more aggressive shift pattern. 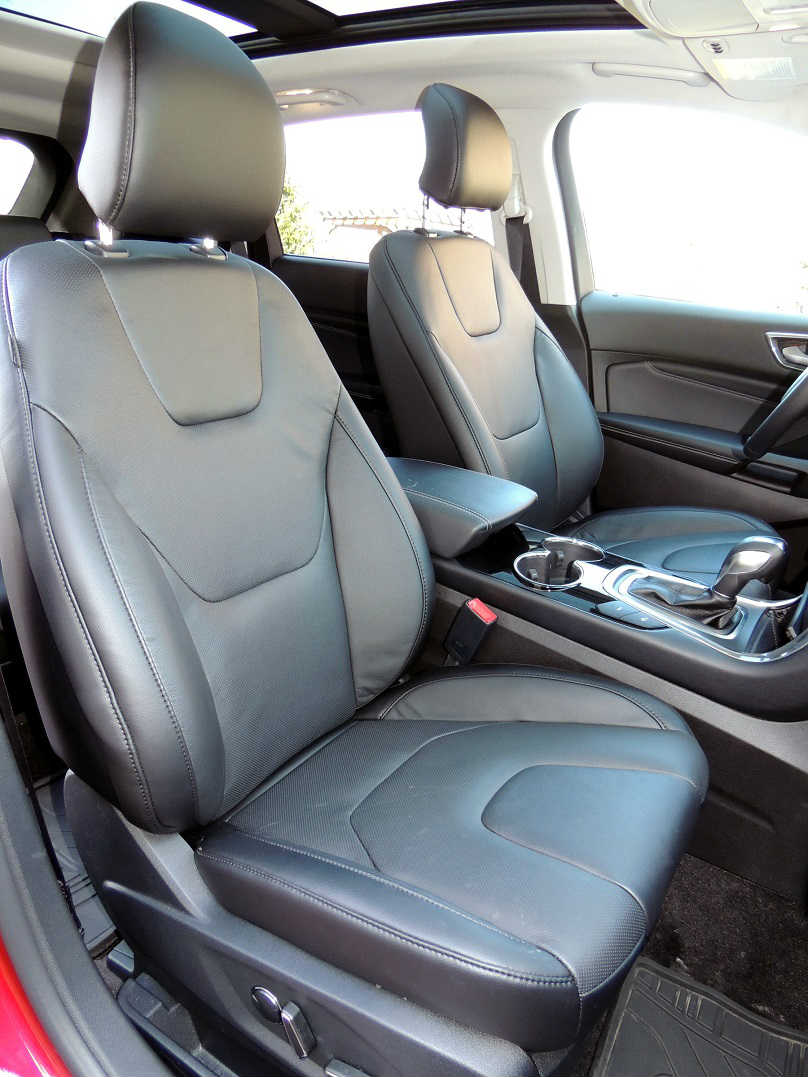 It does make for more spirited driving, but I found that in a two-ton vehicle, dropping it into sport and using the paddle shifters was only briefly amusing.

My tester had the 2.0-litre four-cylinder, which was lively enough, not to mention capable of towing 3,500 lbs when properly equipped.

Put your foot down hard, and the Edge moves off the line with some turbo lag, but comes into its own around 3,000 rpm. It’s not a rocket, but passing isn’t a “white knuckle” experience when you need to get by an RV or transport. 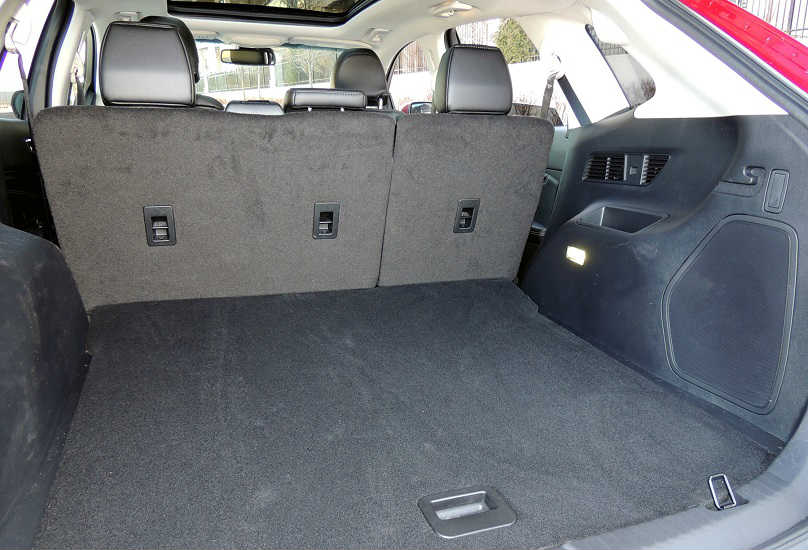 I had no opportunity to drive the 2.7-litre V6, but colleague Jim Robinson was impressed with its power, likening it to a small V8.

As you’d expect with any Ford product, Titanium comes well dressed, with my tester having tasteful satin chrome accents on the door panels and around the instruments, plenty of grained soft-touch surfaces and leather seating – power adjustable buckets up front, and 60/40 split bench in rear.

And there’s no shortage of premium amenities, especially once you throw in the imaginatively named “302A Equipment Group” as included in my tester: front seat heating/cooling, rear seat heating, dual-zone climate control, heated steering, power rear hatch and 180-degree camera in the front bumper.

The camera helps you see what’s coming from either side when pulling out from between tall vehicles or past buildings. What’s cool is the nozzle that pops out to wash the lens when you hit the front washer. This time of year, cameras don’t stay clean for long. 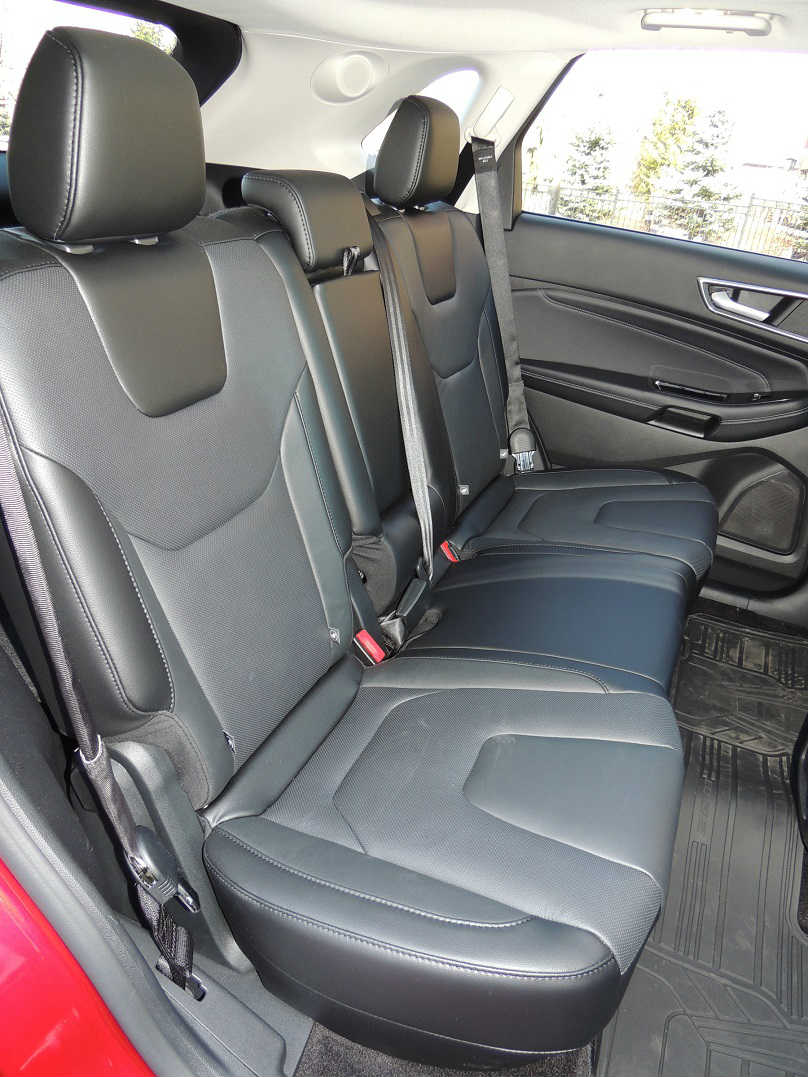 Also interesting was the Active Park Assist, which uses side sensors to scan and evaluate suitable spaces, and then parallel parks your vehicle.

Panoramic sunroofs are becoming increasingly popular on this kind of vehicle, and the Edge benefits from a mighty big one. The glass extends over both rows of seating, and for $2,000, it really opens up the interior.

The SE rolls on 18-inch aluminum wheels (19-inch on Titanium, 20-inch on Sport). My tester received the available 20-inchers, adding $850 to the price, but looking fine. 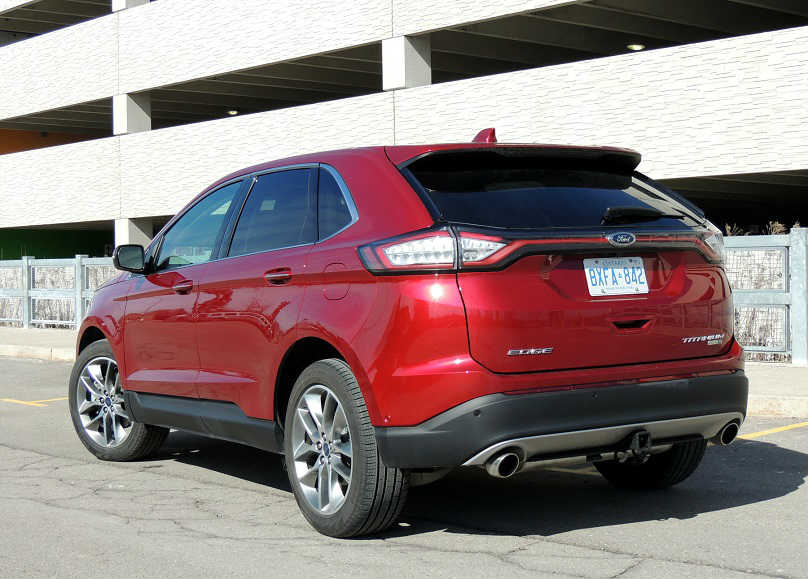 The one negative with lower trim models is they come with the old SYNC infotainment system. It is fiddly and unintuitive, while the new SYNC 3 (on Titanium and Sport) is as easy to use as your tablet.

Overall, Edge should check all the right boxes for those seeking a family-friendly crossover.

Although some competitors have shoehorned in a third row to say they are “seven passenger,” the reality is these seats are cramped and seldom used.

And on that note, I’m glad Ford resisted the urge.