SVR checks all the boxes, and dials up the “pace” component considerably

That used to be Jaguar’s marketing slogan, which pretty accurately described their cars.

They were beautiful to look at, reasonably accommodating and went like stink.

They have subsequently adopted the third element of that slogan for their SUV/crossover range — hence, E-Pace, F-Pace and I-Pace.

The latest in this line is the F-Pace SVR, which goes on sale this summer starting at $92,000.

It begins with the unarguably “grace”-ful F-Pace SUV, and dials up the “pace” component considerably with the 5.0-litre supercharged V8 engine producing a lusty 550 “European” horsepower (542 by our standard) at 6,500 r.p.m., significantly more than any of its most obvious up-market-branded competitors, although way down from the crazy Jeep Trackhawk’s 707.

It is mated to a ZF eight-speed automatic transmission.

It isn’t the fastest SUV — the Alfa Romeo Stelvio and Trackhawk would beat it in a drag race. Still, not too many years ago, a number like this was supercar territory. Now, it’s mid-size SUV territory.

Ross Restell, lead dynamics engineer for the SVO (special vehicle operations) team which created the SVR (yeah, it confuses me, too) used to work for Lotus, a company that knows a thing or two about suspensions.

He says the nickname for this car is the “magnificent beast.”

To this end, starting with the regular F-Pace was a huge advantage, since it already handles very well thanks to excellent torsional rigidity from its relatively lightweight aluminum-intensive body and its double-wishbone front/integral link independent rear suspensions.

“We think we’ve hit the sweet spot between ride comfort, handling and performance with the SVR,” Restell says. 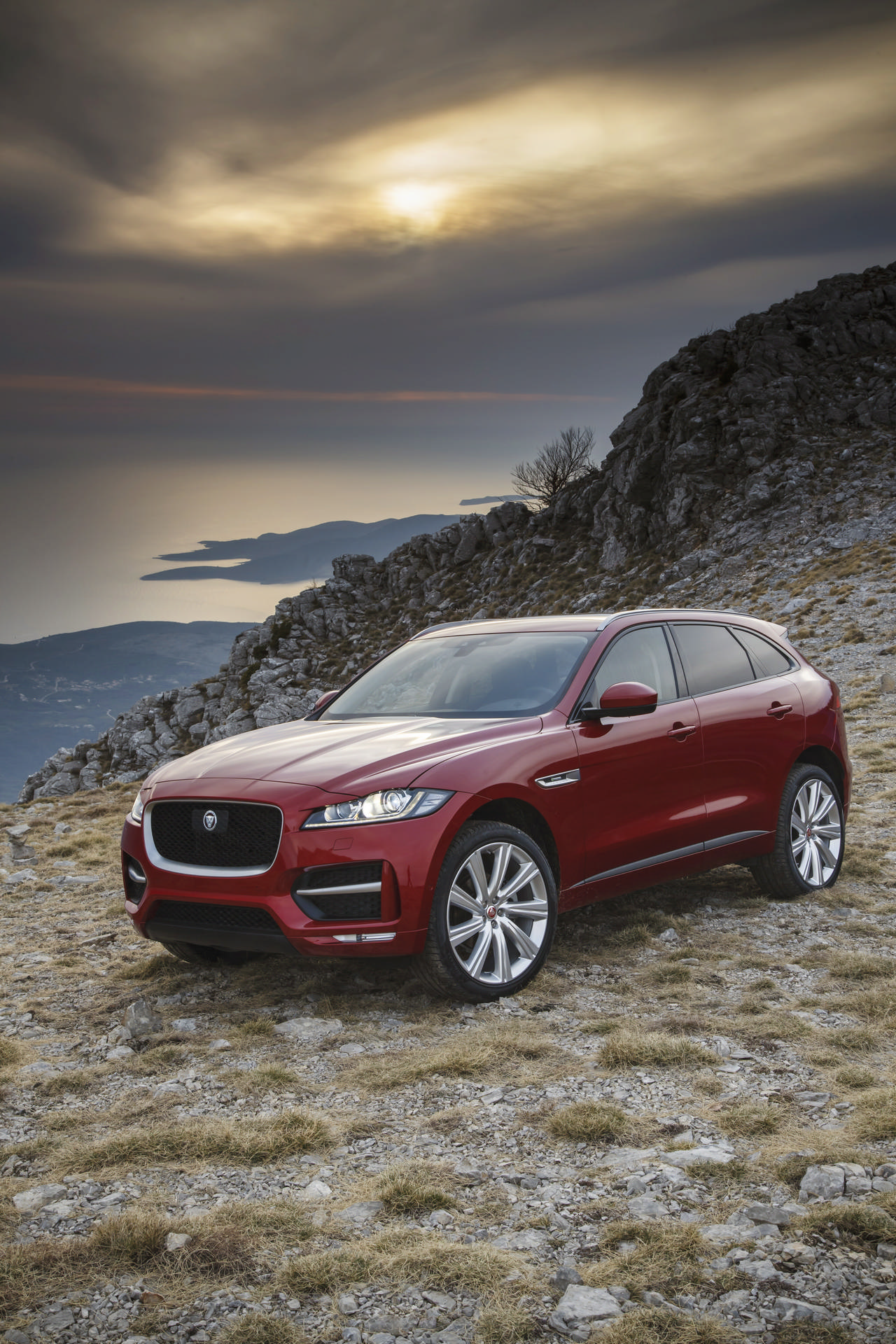 Increased spring rates (by 30 per cent front, 10 per cent rear), bigger antisway bars and stiffer suspension bushings all around suppress compliance to help improve stability, and reduce body roll by some five per cent.

This does firm the ride up a little, but they were aiming for a vehicle that was quick but still tractable and easy to drive.

“What’s the point of having a vehicle like this if it beats you up all the time?” Restell notes.

“You need to put your kids and dogs in it. We wanted it to remain comfortable, and the dampers are always the key to this. We spent a lot of time calibrating those!”

More speed means bigger brakes and larger forged wheels, which, nonetheless, are several kilograms lighter than before. They are shod with bigger tires.

More power means more heat, so changes to the exterior were largely aimed at improved cooling.

Thus: a new front bumper, a larger grille to let more air in, vents in the hood to let the air back out, vents in the front fenders to help keep the brakes cool, still more vents on the body sides to aid aero, a lip spoiler on top of the tailgate for added high-speed stability and a new rear bumper, which houses four big, round tailpipes.

All of this is fairly subtle, but it should be enough that your neighbour will know your car will blow his away…

The four-wheel drive system is set up to make the car’s essential character that of a rear-wheel drive — i.e., a true driver’s car.

Under hard acceleration, the torque goes all to the rear wheels; the front-to-rear torque split can go as far as 50-50 depending on conditions.

The F-Pace SVR isn’t really designed for rock-crawling, but it will surely go places you would never dream of taking a vehicle like this. I hope. 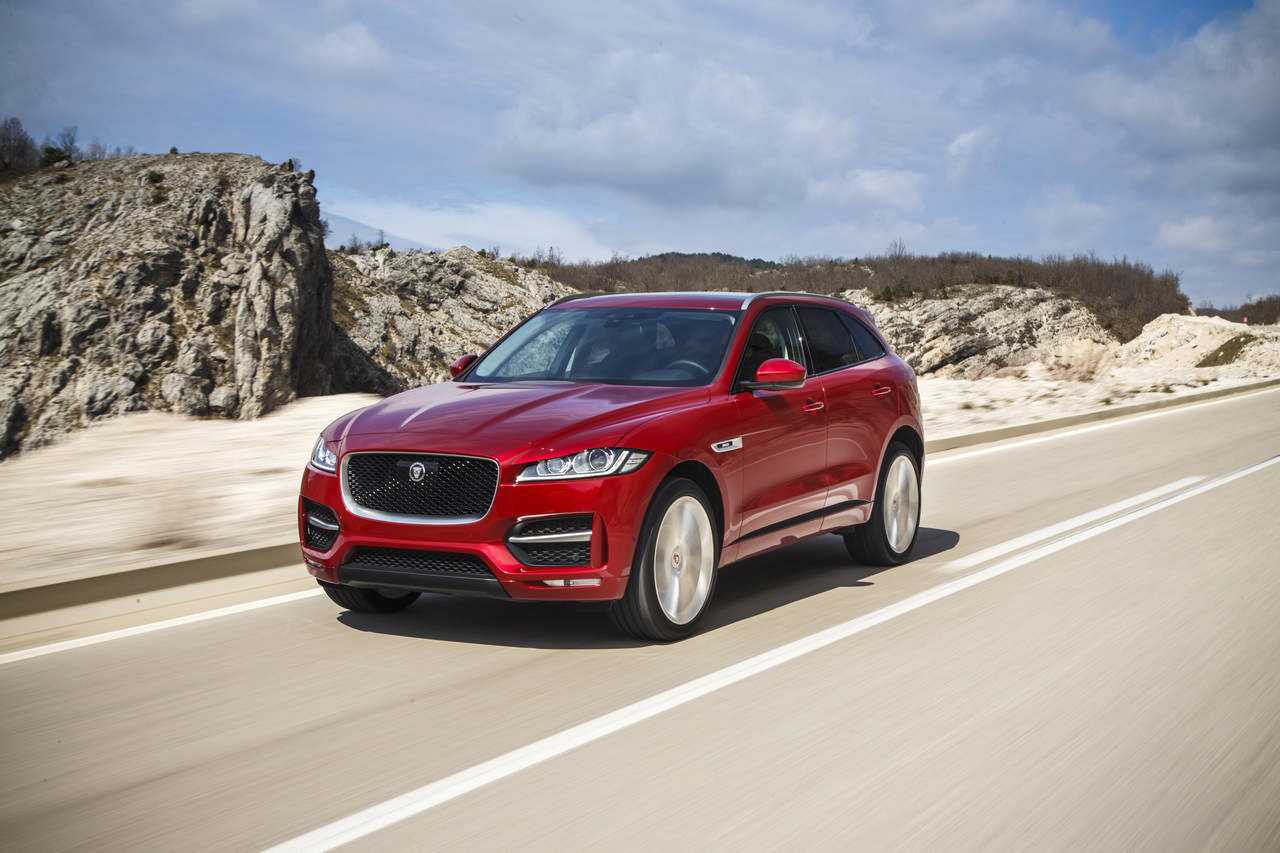 Torque-vectoring by braking, whereby the car automatically applies brake pressure to one or more wheels to help the car rotate into corners and power back out of them, helps make you feel like you’re a better driver than you probably are. Nothing wrong with that…

As usual with Jaguars, you can dial up the driving mode that suits you and/or the moment.

In a car like this, “Dynamic” is the obvious choice, which makes throttle, transmission, dampers and steering react more quickly and precisely.

When driving in semi-hooligan fashion, the new continuously-variable exhaust system keeps the beat going, offering a variety of exhaust notes depending on drive mode, even allowing some backfire pops that sound so cool when reflected off a rocky wall — about which, more anon…

It must be said that this system is not as loud as that in the F-Type sports car. This, after all, is a family vehicle, so decorum must reign.

The new exhaust gubbins also weighs some 6.5 kilograms less than the old one, so you can even claim some environmental benefits here, because less weight means lower fuel consumption.

How about that “space” criterion? Quite reasonable by the standards of the mid-size SUV field, which includes the likes of Stelvio, BMW X5, Mercedes-Benz GLE and Porsche Macan.

Accolades, then, to Jaguar’s body engineers and interior designers for cramming reasonable amounts of room into such a sleek shell.

Jaguar is aiming this vehicle at youngish families, perhaps with a sprog or two, who want a vehicle with enough room to be reasonably practical as a daily driver. The 33.5-cubic-foot trunk can handle the gear families typically haul around.

The 40-20-40 split-folding rear seatback yields added cargo/people-carrying flexibility, although it does not fold completely flat.

The interior is largely carry-over, apart from the 14-way adjustable front seats, upholstered in Windsor leather with a diamond-shaped motif with SVO badges embossed in the headrests.

A new, more conventional shift lever replaces the former round knob, which actually worked quite well. But because it was different, it apparently was unloved by customers. 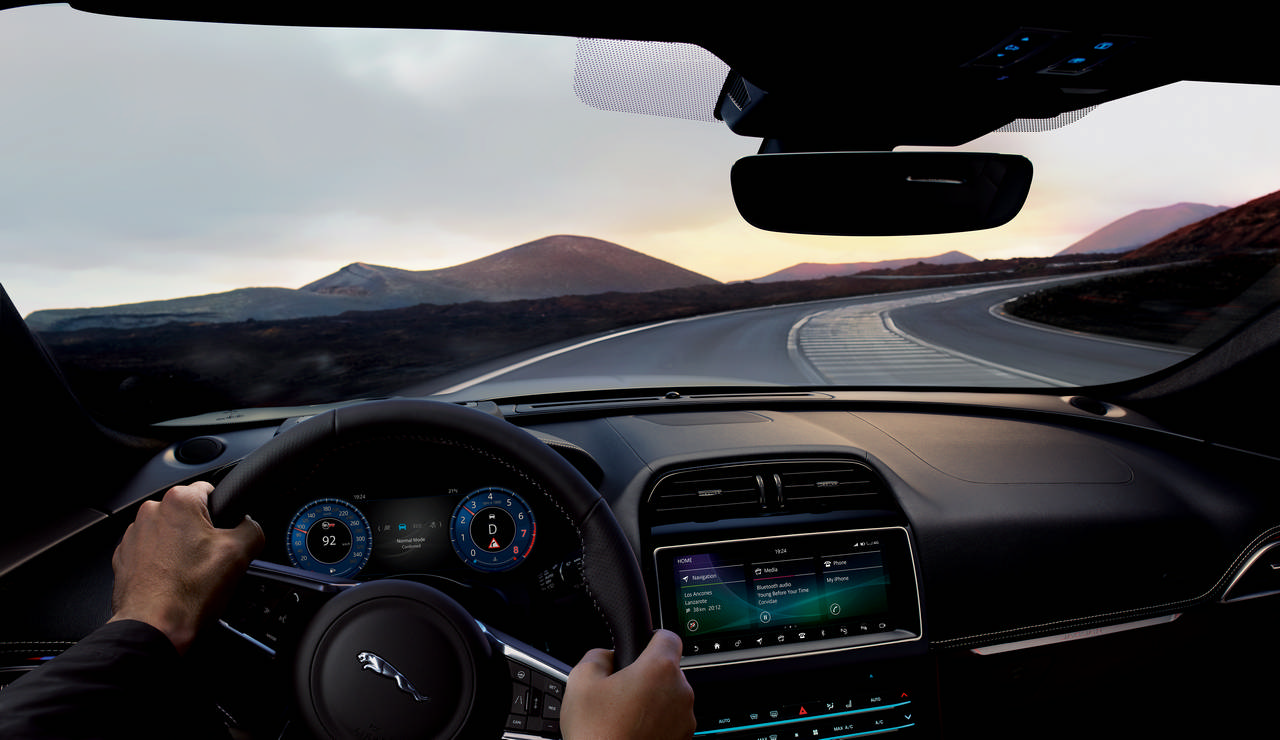 Kudos to Jaguar for getting the manual shift pattern for this lever correct — back to upshift, forward to downshift. Think about how your body weight is transferred when accelerating and braking, and this is intuitively obvious. So, why do so many cars get it wrong?

Alternatively, you can use the lovely aluminum paddles behind the steering wheel if you think you can shift better than the auto-box. Hint — you probably can’t.

The dash is essentially unchanged, with a pair of big screens conveying the usual information. 4G Wi-Fi is supplied for up to eight devices.

There have been media reports that the launch of this vehicle was delayed almost a year due to a shortage of certain parts from suppliers. Maybe if they knew this in advance, Jaguar might have had time to upgrade the infotainment systems to those found in the new 2020 XE sedan (see accompanying story).

No time to worry about that, because the roads beckon.

And what roads we had.

We started in Saint-Tropez, then northward along some of the two-lane twisty blacktops of song and story.

A coffee stop was programmed into the SatNav at the end of a gnarly section of driveway-cum-road to the top of a mountain, probably as close to off-roading as an F-Pace driver is likely to get.

From there, north again along a stretch of the historic Route Napoleon, winding through les Alpes-Maritimes, then east and south to Cagnes-sur-Mer on the Mediterranean.

A better place to test a car like this would be hard to imagine.

Some of those Route Napoleon roads switch back and forth, through some very narrow tunnels, with aforementioned massive rock walls everywhere. 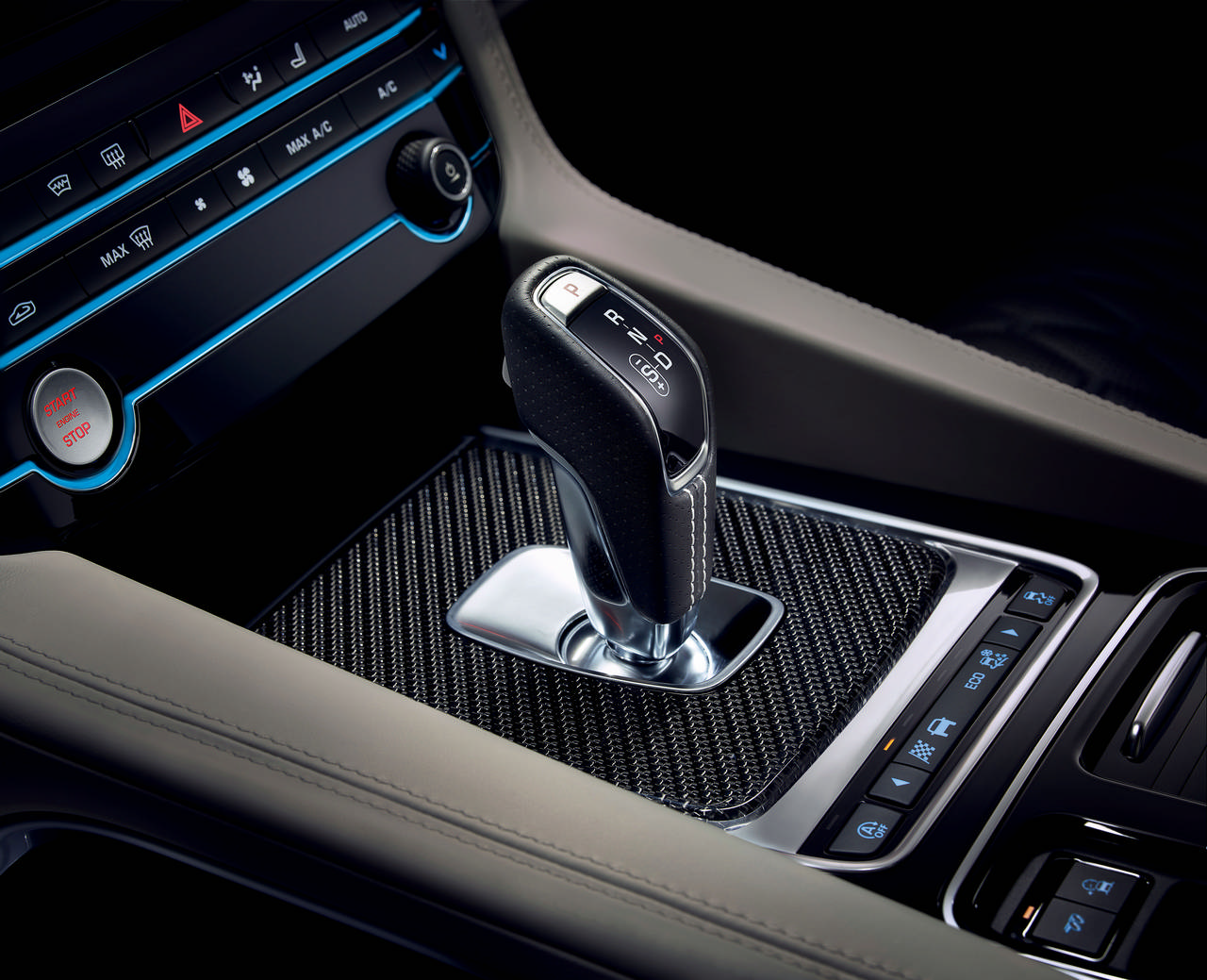 In a large-by-European-standards car, you want nimbleness; the F-Pace SVR delivers.

Handling is nothing short of brilliant. As noted, we left the car in Dynamic mode, which, among other things, eases off the limited slip differential a little, allowing the car to be more “pointy,” more fun to drive.

There is a touch of understeer — front-end plowing — when hurrying along, but a brief left-foot breath on the brake pedal upon turn-in helps the nose tuck in.

When the road opened up, so did the Jag — it went like Jack the Bear. Acceleration is, as promised, swift but not violent.

Again, a blend of pace and grace.

Still, one can’t help but wonder how much better it would be if the car were a couple hundred kilos lighter and a couple hundred millimetres lower. Sigh; the Americans get an XF wagon, but we don’t…

Ride quality is fine, with one possible caveat — even secondary French roads are better-paved than our main roads, so the ride might feel a bit clumpetty back home.

The only hint we got of that was on some of the sharper speed bumps. But then, that’s the point of a speed bump.

The seats are excellent — supportive in all the right places when you’re into it, comfortable when not pressing on, with enough adjustability to suit just about anyone.

The Jaguar F-Pace SVT seems to check all the boxes. Pretty to look at, usefully spacious, quick when you want it to be, comfortable when that’s your mindset.

Despite some strong competition in this field, how can it miss?