I was a little surprised at Porsche for encouraging a winter road test of their 911 Targa 4 GTS.

I was a little surprised at Porsche for encouraging a winter road test of their 911 Targa 4 GTS.

I’m sure they realized I could be sliding around in a $172K vehicle, not to mention giving its exterior a shellacking with gravel and road salt.

Mind you, it seemed a moot point when I agreed to do this, as winter still hadn’t arrived. And any serious dump of snow was beginning to seem unlikely.

And then it happened.

On the day I picked up my uber-pricey ride, reports warned of a winter storm blowing in from Texas. It contained the usual dire predictions that at one time may have panicked certain mayors into mobilizing the armed forces, not to mention triggering school bus and flight cancellations. 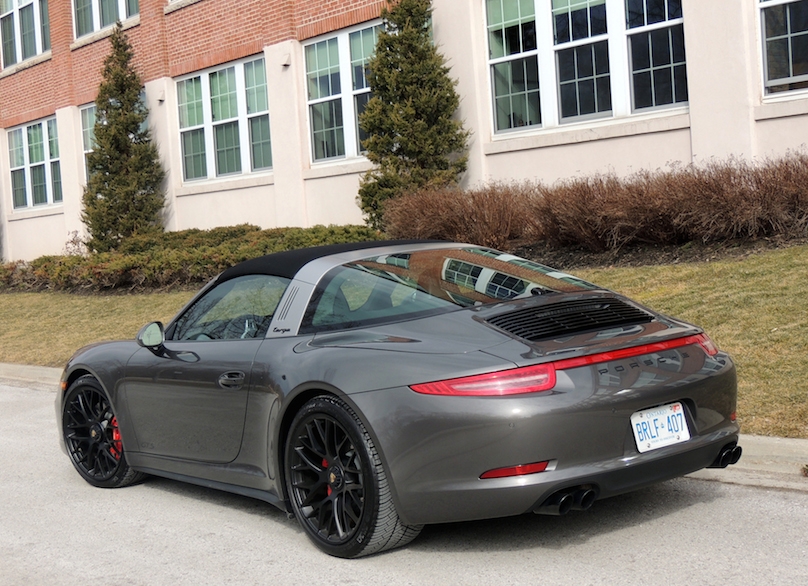 And here I was, climbing into a low-slung sportscar.

Perhaps not my wisest decision, but at least I’d have one day of dry asphalt before the flakes were expected.

So with a naturally aspirated, 430-hp flat six at my command – mated to a rapid-fire PDK transmission – I’d make the most of this brief opportunity.

For those unfamiliar with the scope of the 911 lineup, it encompasses 25 models that include coupe, cabriolet and targa models, rear-drive and AWD, manual and PDK automatic, with several powertrains. They run from the “base” 911 Carrera at $102,200 to the 911 Turbo S Cabriolet at $228,800. 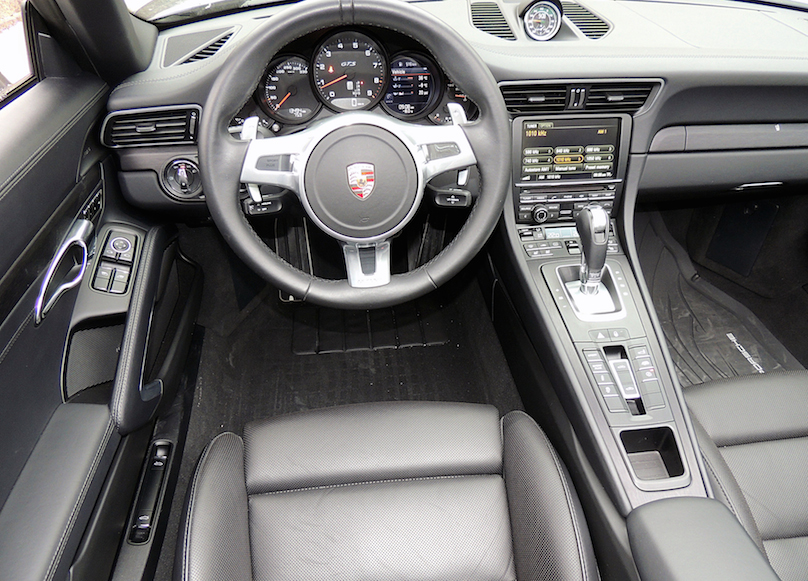 My Targa 4 GTS starts somewhere near the middle – at $151,500, with another $21,225 in options. This includes $5,530 for the PDK seven-speed automatic, instead of the standard-equipped seven-speed manual.

So I had time for a few on-ramps and a good highway run to really tap into its power, revelling in the sonorous quad exhausts as its 3.8-litre engine climbs to a 7,500 rpm redline.

Performance enthusiasts continue to moan about the takeover of dual-clutch automatics – and the PDK is no exception – but these can shift in milliseconds, which is something I can’t do.

And the results speak for themselves. Zero to 100 km/h takes 4.7 seconds with the manual and only 4.3 with the PDK – both while in Sport Plus mode.

On that note, there are three drive modes, and on dry pavement, Sport and Sport Plus are good fun. Not so much in the snow.

But I did explore their benefits before and after the snowstorm – and they are significant.

‘Sport’ was my go-to mode, allowing you to leave the suspension in the default ‘comfort’ setting, which is firm, but not bone jarring. Choose ‘Sport’ damping, and it will rattle your fillings.

So with a naturally aspirated, 430-hp flat six at my command – mated to a rapid-fire PDK transmission – I’d make the most of this brief opportunity.

Punch the throttle and you’ll notice an almost instant response, with the PDK upshifting later to take full advantage of its 325 lb/ft of torque. And with downshift rev matching, and the sport exhaust activated, each gear change delivers a sweet chorus of rumbles and pops.

Sport Plus holds gear changes even longer, and firms up the suspension. The 911 now responds to every prod of the pedal and you can feel a directness in the steering.

Porsche Stability Management (PSM), which I would soon rely on in the snow, has a higher threshold in Sport Plus, allowing some oversteer before reining in the back end.

Then the skies darkened as the early flakes began to fall.

In short order, the roads became wet and slick, but my tester’s big, sticky winter tires, and Porsche’s all-wheel-drive system (PTM) were up to the task.

It’s a feeling that didn’t change after a night of heavy snow.

The morning routes were no picnic, but were handled nicely by the 911. Especially once the plows took away the worst of it so that ground clearance wasn’t an issue. 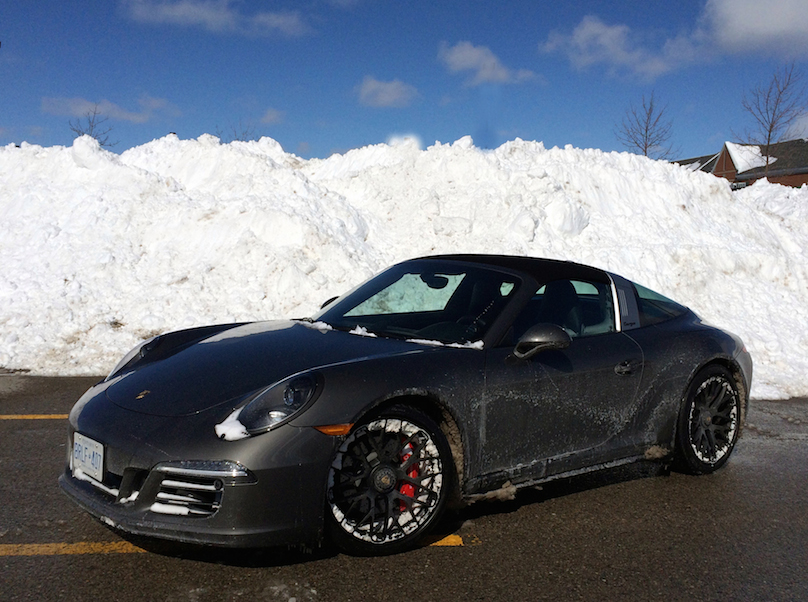 I’ve driven the rear-drive 911, and would never take it out in winter. It can be tail happy at best of times – which is fun in the summer – but not so much now.

And even though Porsche’s AWD is rear-biased, delivering sportscar handling on dry asphalt, it also reacts seamlessly and intuitively in the slop.

Not once did I get the car out of shape, mind you I wasn’t driving like a moron. And after a few kilometres, found it entertaining.

So did my kids, with my son seated up front (wanting to be seen in a 911) and my 74-lb daughter tucked comfortably in the otherwise cramped rear quarters. Don’t try jamming adults back there, as you may need the “jaws of life” to extract them. 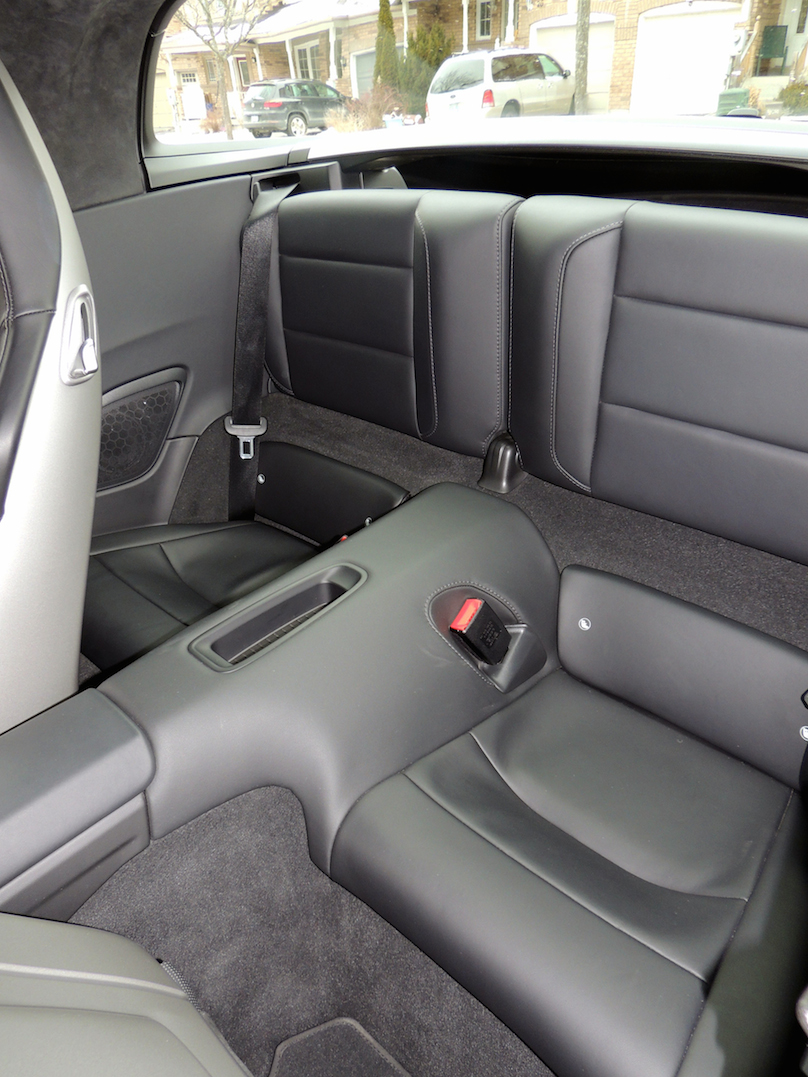 If you’re wondering what’s meant by a “Targa” roof, consider it the halfway point between a fully convertible top and a sunroof.

Only the roof panels are stowed behind the 911’s back seats, with the wrap-around rear window (with no C-pillars) remaining. It was just fine at keeping out the cold.

Every time I review a 911, I end up looking for ways to come up with the cash. There’s no practical argument for what is essentially a two-seater sportscar with a cooler-sized trunk, but it is damned fun to drive.

Even in early March.