Who needs a CUV after the Mercedes E-Wagon?

Personally, the whole wagon thing makes sense to me because, in something like the E 400 4Matic Wagon, you have all the utility you’ll ever want in a discreet and very swift package.

HAMBURG, Germany: Hands off the steering wheel at an indicated 120 km/h took a leap of faith on my part, but this time the semi-autonomous driving system in the 2017 Mercedes-Benz E 400 4Matic Wagon worked perfectly.

Recently, I wrote in this space about the first drive of the sedan version of the new E-Class and found the autonomous system worked some of the time but not all of the time, with the car sometimes drifting across the centre line and sometimes with the lane departure steering forcing the E-Class back to the centre of the lane. 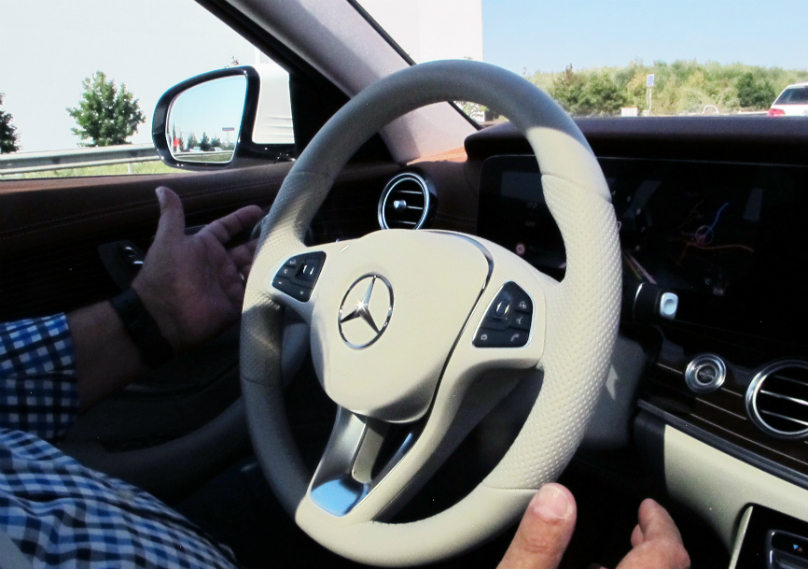 This time things were definitely different.

I wouldn’t call it semi-autonomous, but more lane centering/keeping with the E-Class unerringly positioning itself squarely between the line on the right and left. 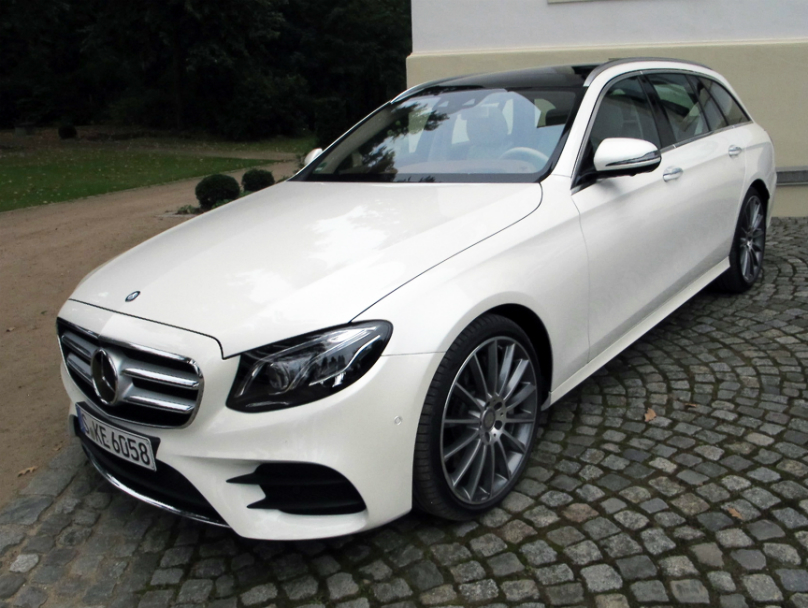 The other thing it can “watch” is the speed limit. If the limit was 120 km/h, the E Wagon pegged itself there. If it reduced to 80 km/h so did the E-Class and then brought itself back up to 120 km/h when the posted limit increased.

At the same time, the much-enhanced Distronic adaptive cruise control kept my co-driver and myself at a safe distance at all times and at all speeds.

In short, this was what I was expecting.

So this time, I just relaxed and enjoyed the scenery, especially on a speed limit free stretch of the Autobahn coming down from the Baltic Sea to Hamburg. 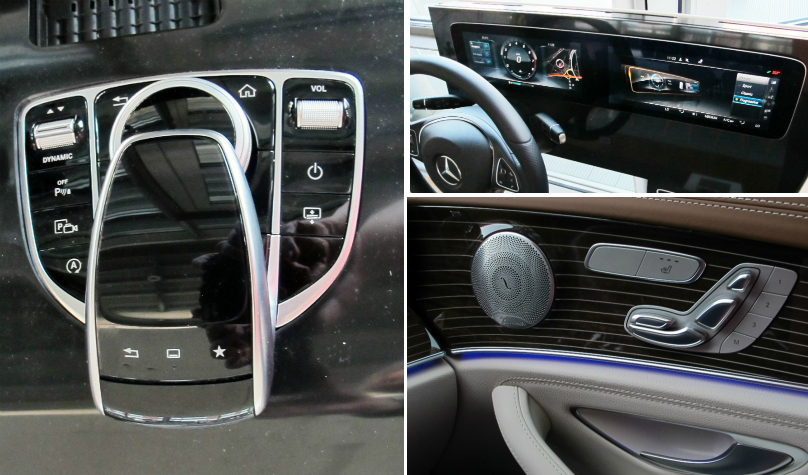 Of course it was hands on the wheel and the Intelligent Drive switched off.

Maybe it’s because the lanes are wider, or the smoothness of the road surface or the driving discipline with everyone using turn signals and sticking to the lane where they felt conformable — but the bottom line was, it works.

It also gave us a chance to let the E Wagon stretch its legs and prove how well it drives and feels in the upper performance ranges.

Unlike the three E-Class sedan versions we will see in Canada, the only wagon version we will get is the E 400 4Matic with three-litre, twin turbo, direct injection V6 producing 329 hp and 354 lb/ft of torque.

You May Like: Intelligence and performance in a luxury package 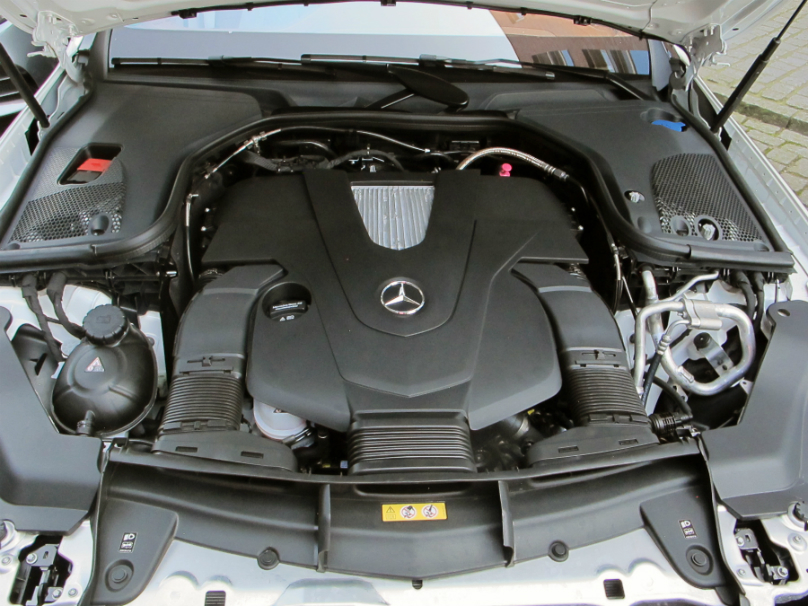 New to the segment is a Mercedes-Benz in-house produced nine-speed automatic transmission with stop/start technology. 4Matic full-time all-wheel-drive is standard.

The wagon will not arrive in Canada until the first quarter of next year when pricing will be announced. With the E 400 sedan starting at $69,400, you can expect it to cost a little more, but not much.

Perhaps the biggest “wow” part is the twin, 12.3-in LCD screens that make up the instrument panel with driver info such as tach, speed, semi-autonomous date on the left and then literally layers of infotainment/handling/climate on the right including a five-mode seat massage for driver and front seat passenger. 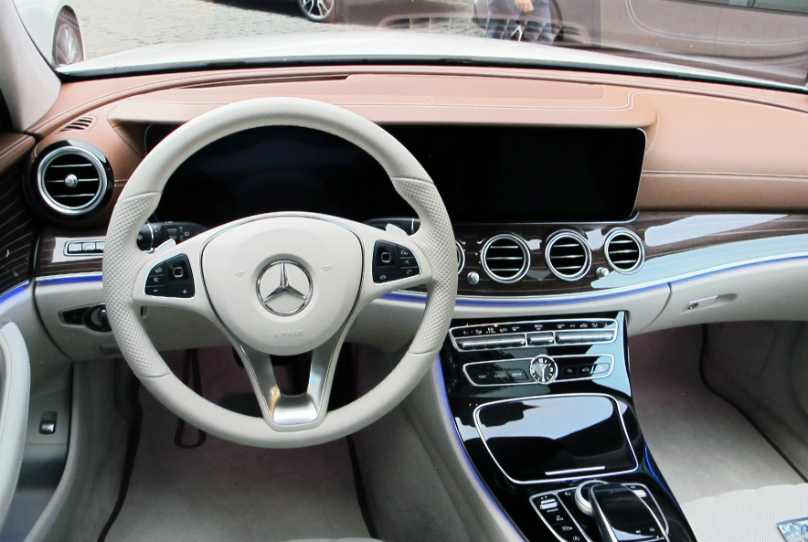 It is all controlled by a rotary dial and touchpad on the centre console.

Just one of the things it can access is Dynamic Select which allows the driver to adjust the engine, transmission and suspension through five modes – Eco, Comfort, Sport, Sport+ and Individual.

One other thing I noticed in the Sedan and again in the Wagon is an ambient lighting system with no less than 64 selectable hues.

When I drove the E 300 4Matic sedan, I commented on the desirable mix of materials and trims on the interior, but it did not prepare me for the E 400 Wagon tested here.

There are eight leather combinations on the Wagon. Top of the list, and fitted to the model tested here was the optional “Designo” Macchiato Beige (looking white to me) pleated seat inserts and Saddle Brown leather trim offset by the Magnolia Brown wood trim featuring inlaid pin-striping and further enhanced by the metal trim 13-speaker Burmester surround sound speaker inserts and aluminum finished seat adjust. 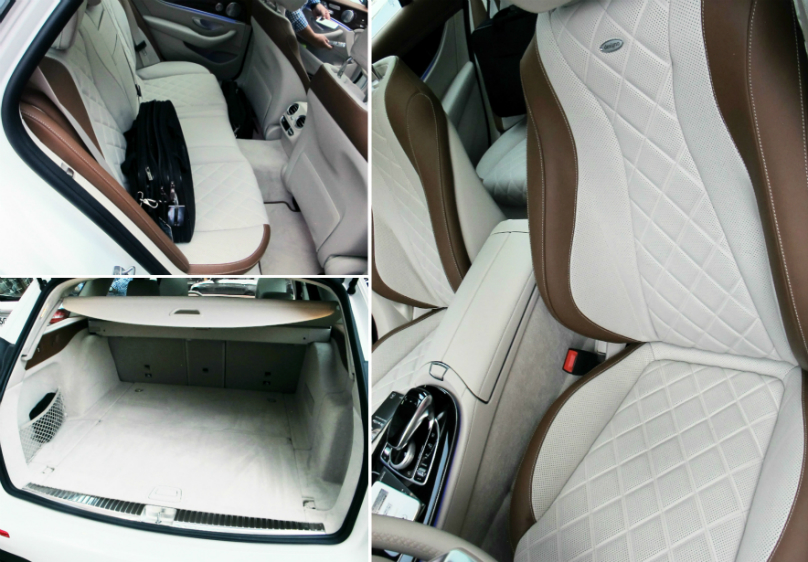 When it comes to interiors, this folks, is a good as it gets.

While we are knee deep in CUV/SUVs here in Canada, the wagon is still king in Europe when it comes to utility needs.

You May Like: The Evolution of the Family Car: From Station Wagons to Crossovers

At the Wagon world launch in Hamburg, we were told one in three E-Class models sold in Europe is a wagon and that increases to every second one in Germany.

On the 127 km way south from the Baltic to Hamburg we counted SUV/CUVs for a grand total of 19 among the thousands of vehicles on the Autobahn, which has to tell you something.

Personally, the whole wagon thing makes sense to me because, in something like the E 400 4Matic Wagon, you have all the utility you’ll ever want in a discreet and very swift package.