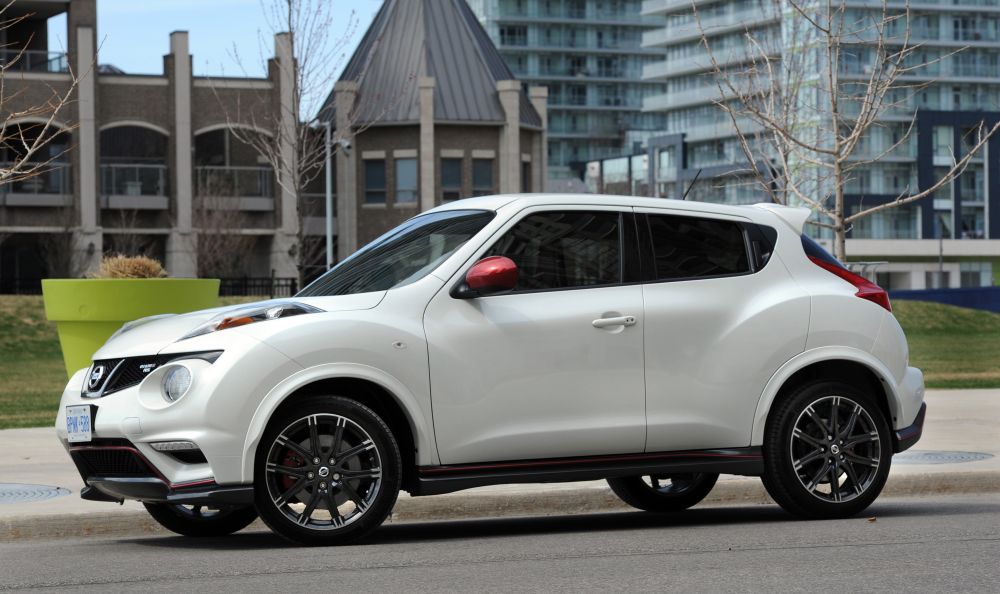 The old Cockney saying “Nice legs, shame about the face”, may be blatantly rude in our oh-so politically correct modern era. But, for me, it seemed cheekily fitting when I arrived to pick up the 2014 Nissan Juke NISMO RS.

I have to admit; I’ve found it hard to get on board with the Juke ever since its initial 2010 debut in New York.

The bulgy-eyed, warthog face, its oddball shape and no-compromise style, its creators spouting design-speak about a Robiotic theme, supposedly combining robotic and biological elements, it all seemed to make for a mixed bag with a kind of Star Wars storm trooper flavour.

I didn’t get it. But, then again, I wasn’t supposed to.

The Juke is aimed at a younger target audience, taking its design cues from active lifestyle influences – dune buggies, motorcycling, snowboarding, whatever. And Nissan doesn’t mind polarized opinions about the Juke, a pocket crossover that was designed to be a rebellious “real statement”, a harder-edged concept than the company’s Murano and Rogue CUVs.

The youthful exterior flavour is reflected inside by interior curves, a bulging centre stack and a motorcycle tank-shaped console that combines for a combined urban-tough stance as well as country road agility. 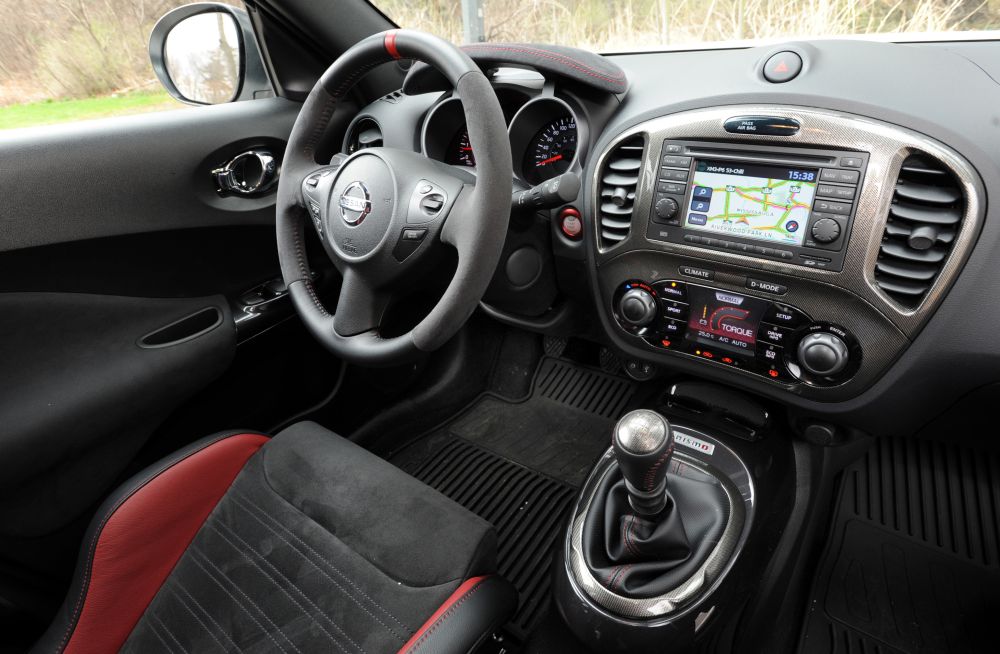 For 2014, the Juke is now available in three distinct performance flavours.

The lineup starts with SV models harnessing a 188 hp 1.6-litre turbo four-cylinder that puts power to the road with either of two powertrain combos – front wheel drive mated to a six-speed manual transmission or with an all wheel drive system meshed to a CVT transmission. A tarted-up SL model with the same engine, and with AWD and CVT, adds leather, navigation and other upscale goodies.

The next-step-up NISMO model, reviewed by my colleague Neil Moore last year, bumps the power up with a 197 hp version of the 1.6-litre turbo four-cylinder engine, along with other performance enhancements hooked up to the same drive and transmission combo choices.

But for 2014, the Juke NISMO RS, the third and newest model in the JUKE lineup, pushes the performance envelope with an even more muscular 215 hp version of the 1.6-litre turbo four-cylinder engine, available only in front wheel drive with a new re-calibrated six-speed manual shifter.

The concept behind the development of the new JUKE NISMO RS is to give the customers exactly what they have been asking for – more power, better handling and exclusive equipment like Recaro racing seats, said Brian Thomas, Marketing Director for Nissan Canada.

The more power part of the NISMO RS comes courtesy of optimized ECU settings and a better breathing exhaust system. More durable connecting rods were added to handle the higher output of 215 hp (up 9.1 per cent) and 210 lb/ft of torque (up 14.1 per cent) when compared to the intermediate NISMO offering. The close-ratio six-speed manual, exclusive to the NISMO RS, features lower gear ratios from first to third.

The NISMO RS also adds a Helical Limited Slip Differential to tame some of the expected increase in power and torque steer but drivers will still have their hands full wrestling the wheel under acceleration, especially when goosing the gas while cornering, or over bumpier bits.

But the 215 hp turbo does get the job done, helping to tone your arm muscles while hurtling this beastie down the road, the chorus of pipes and pistons delightfully moaning to a NISMO-tuned exhaust note.

Despite the extra oomph, the Juke NISMO RS carries an optimistic fuel economy rating of 8.2/6.4L/100km (city/hwy). Out in the real world, my average worked out closer to 10.2L/100km (comb). Your mileage may vary depending on just how much fun you’re having.

And the Juke NISMO RS is fun to drive. Despite the upright crossover seating and tallish architecture, taut NISMO suspension changes, a lowered ride height, aerodynamic tweaks and a long list of handling assists help put together a performance thrill ride that’s easy to get addicted to.

No, the seats are not heated and, no, your mother won’t like climbing in and out of them, but these grippy, aggressively bolstered buckets will keep the driver and front passenger firmly planted through any country road twisty bits or the slalom courses of any autocross circuit.

Nissan recently showed a 2015 Juke in Geneva and, while North American power specs are yet to be released, the Euro model showed new jagged boomerang-style headlights to match the taillights, LED mirror signals, 40 per cent more cargo space and even more stress on other angular design accents, a sure sign that the Juke is here to stay.

Which is fine, really, despite my initial reaction.

Because after driving the new 2014 Juke NISMO RS, I think the Juke just might be starting to grow on me.