Optima steps up its Euro styling for 2016

The 2016 Optima gets a new look, starting with Kia’s signature tiger-nose grille.

Kia, like its corporate cousin Hyundai, has long been known for delivering loads of content at a reasonable price.

It’s been their value proposition forever, but with the arrival of Peter Schreyer (now president) to head up design in 2006, styling too has become a recognized part of the mix.

The Optima, in particular, took a giant leap forward with its third generation model, which has proven popular with buyers – and no shortage of automotive scribes.

This begins with Kia’s signature tiger-nose grille – hot stamped into a sophisticated pinpoint design. It is flanked by projector headlamps that pull back into the fenders which accommodate big 18-inch alloys as found in my top-trim SXL tester.

Side panels are smooth and uncluttered, with the sheet metal wrapped tightly over Optima’s big shoulders and pronounced wheel arches. The front windshield is steeply raked, as is the rear window that flows into the raised decklid. LED tail lights and wide exhaust finishers complete the rear view.

Despite the changes, there’s no mistaking the 2016 Optima for anything else – a wise move by Kia, recognizing the model’s success largely rested on its styling.

I’ve seen automakers put all their efforts into a posh exterior, only to fall short inside. Such is not the case with this new model. 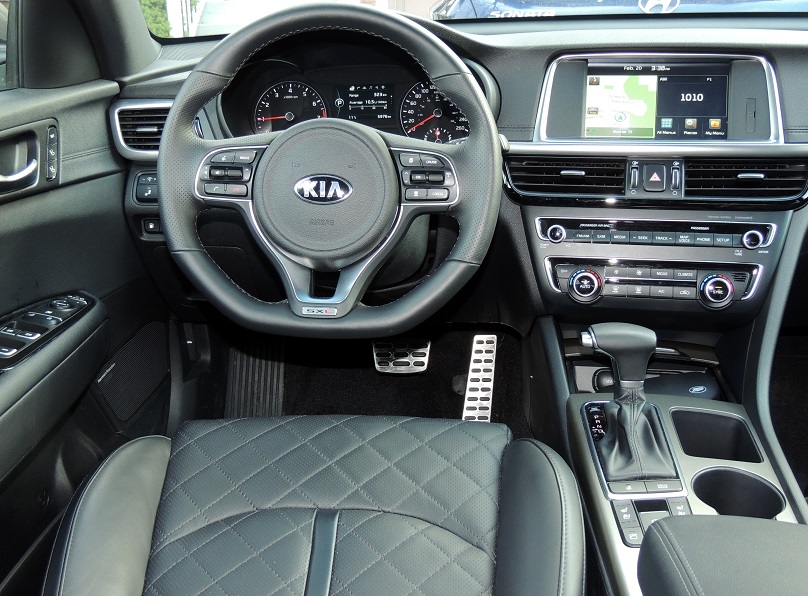 Any ‘wow factor’ stemmed largely from the quilted Nappa leather seats, which in my vehicle were heated and cooled up front (with 12-way/10-way power adjust for driver/passenger, and driver memory). My seats were black, but this leather also comes in Cabernet – which would pop against the otherwise dark passenger cabin.

Surfaces are mostly soft-touch, accented by finishes that include wood, piano black and aluminum, depending on trim.

What’s nice is that you needn’t spend large on a fully-loaded model to get a few frills. Heated leather front seats (with power adjust and driver memory), panoramic sunroof, heated leather-wrapped steering wheel, dual-zone climate control and rear-door sunshades are found in EX trim, starting at $29,395. 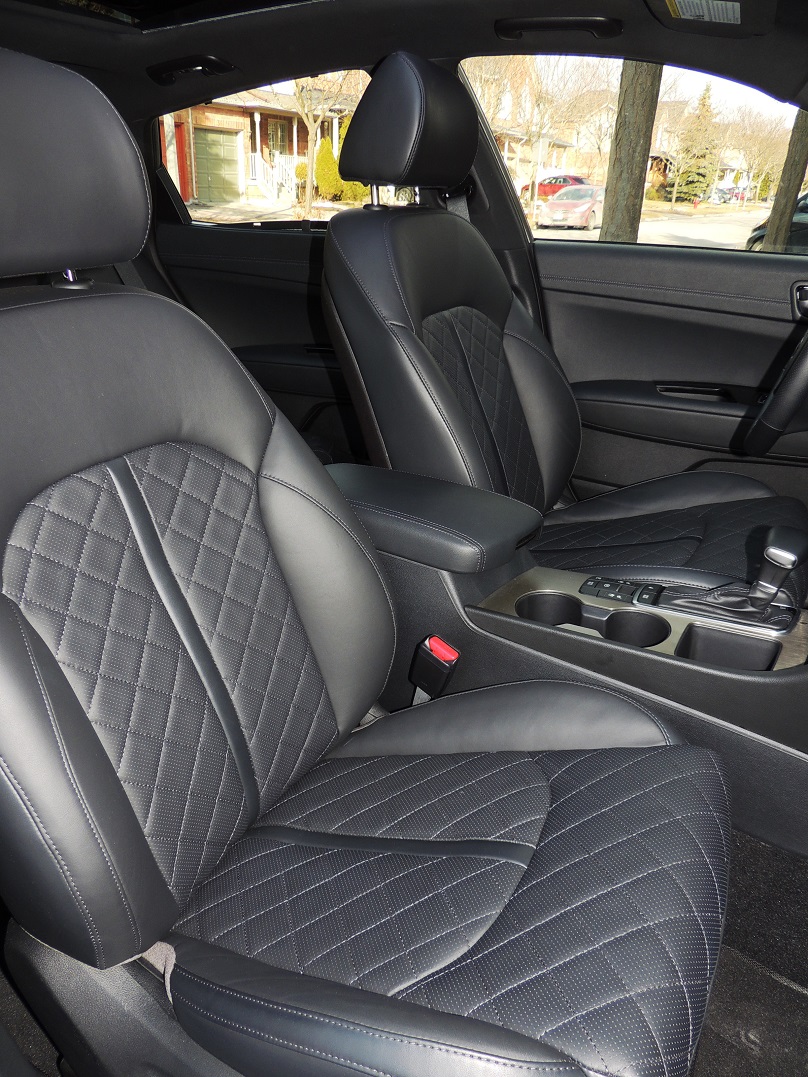 All models get 60/40 split-fold rear seats to expand the 450-litre trunk. With seats upright, there’s ample room for up to three passengers who can really stretch their legs.

You’d be correct in thinking there’s an Optima for many budgets. Excluding hybrids, there are seven models and three engines, starting with the base LX with 2.4-Litre GDI four cylinder (185 hp, 178 lb/ft), and topping out with the SXL Turbo, powered by a 16-valve DOHC 2.0-litre turbo four that delivers 245 hp and 260 lb/ft of torque. 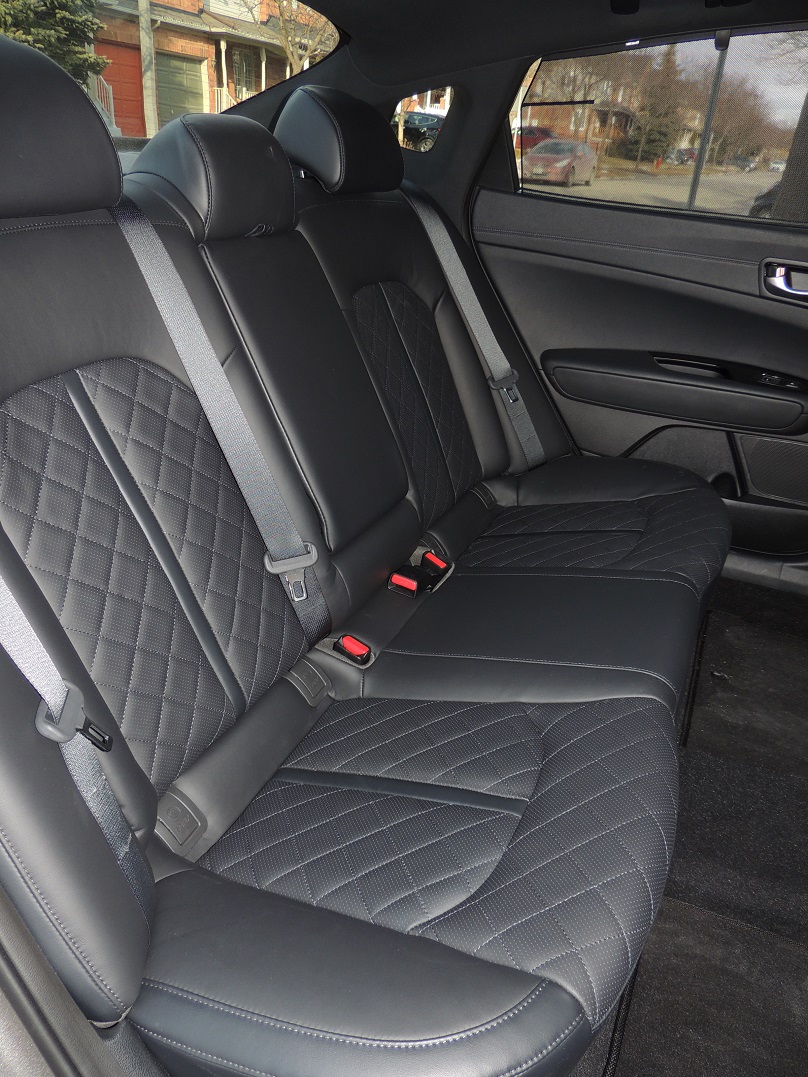 Both engines carry over from 2015, and are mated to a six-speed automatic with Sportmatic sequential shifting – the SX and SXL also get paddle shifters.

My 2.0T, however, promised to be the most lively of the bunch, and did not disappoint.

Hit the pedal its turbo spools up briskly, with peak torque starting at an early 1,350 rpm. And with the drive mode set to ‘sport’, throttle response is quick and shifts are held longer to take advantage of this engine’s wide torque band.

Zero to 100 km/h takes about seven seconds, which isn’t bad for a car this size, and passing is made easy with abundant power on tap until you start approaching redline. 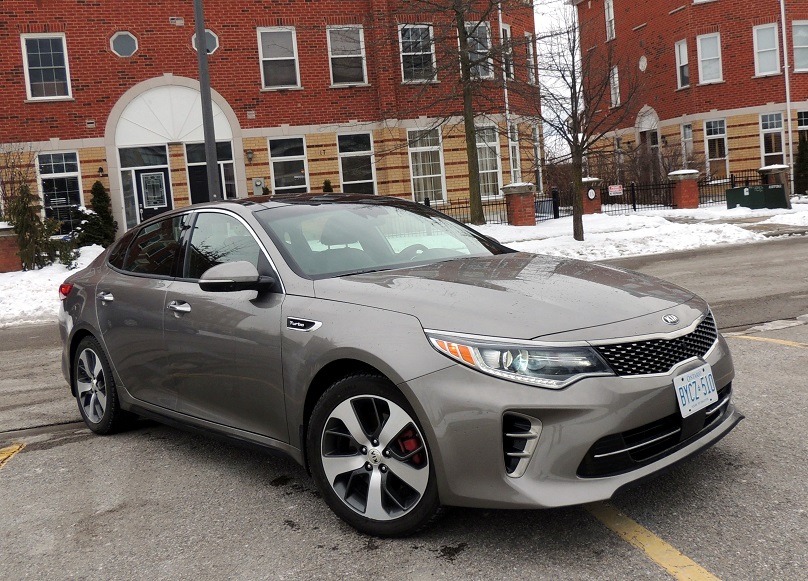 Handling has improved, thanks to a noticeably stiffer chassis, along with an independent sport-tuned suspension that’s reasonably taut in hard cornering without being harsh on rough pavement. And there’s no shortage of it this time of year.

SXL  models also get additional tech like high beam assist, lane departure warning and autonomous emergency braking that uses cameras and radar to monitor the road ahead. If it anticipates a collision and the driver doesn’t brake, the system will.

Although Kia still provides plenty of features for the dollar, it no longer needs this crutch to attract buyers.

Optima is justifiably priced alongside Camry, Accord, Fusion and other mid-size rivals. And with its blend of decent performance, premium amenities and handsome styling, it can easily go head-to-head with the best of these.