My CX-5 GT was the all-wheel drive which featured a long list of standard features and a $2,100 technology package which includes smart brake support, lane departure warning system and forward obstruction warning.

I know I’m driving something special when each of my kids said how nice they found the vehicle when they got into the front seat.

My tester that week was The Mazda CX-5, which was first introduced in 2012.

Sales of the CX-5 have topped 1.4 million units and if my kids’ reaction is any indication, those numbers should continue to climb in the future.

This past summer, I drove the CX-3 for a week, the little brother of Mazda’s compact crossovers and while the ride was impressive, the space inside was not. The CX-3 really isn’t for a growing family. 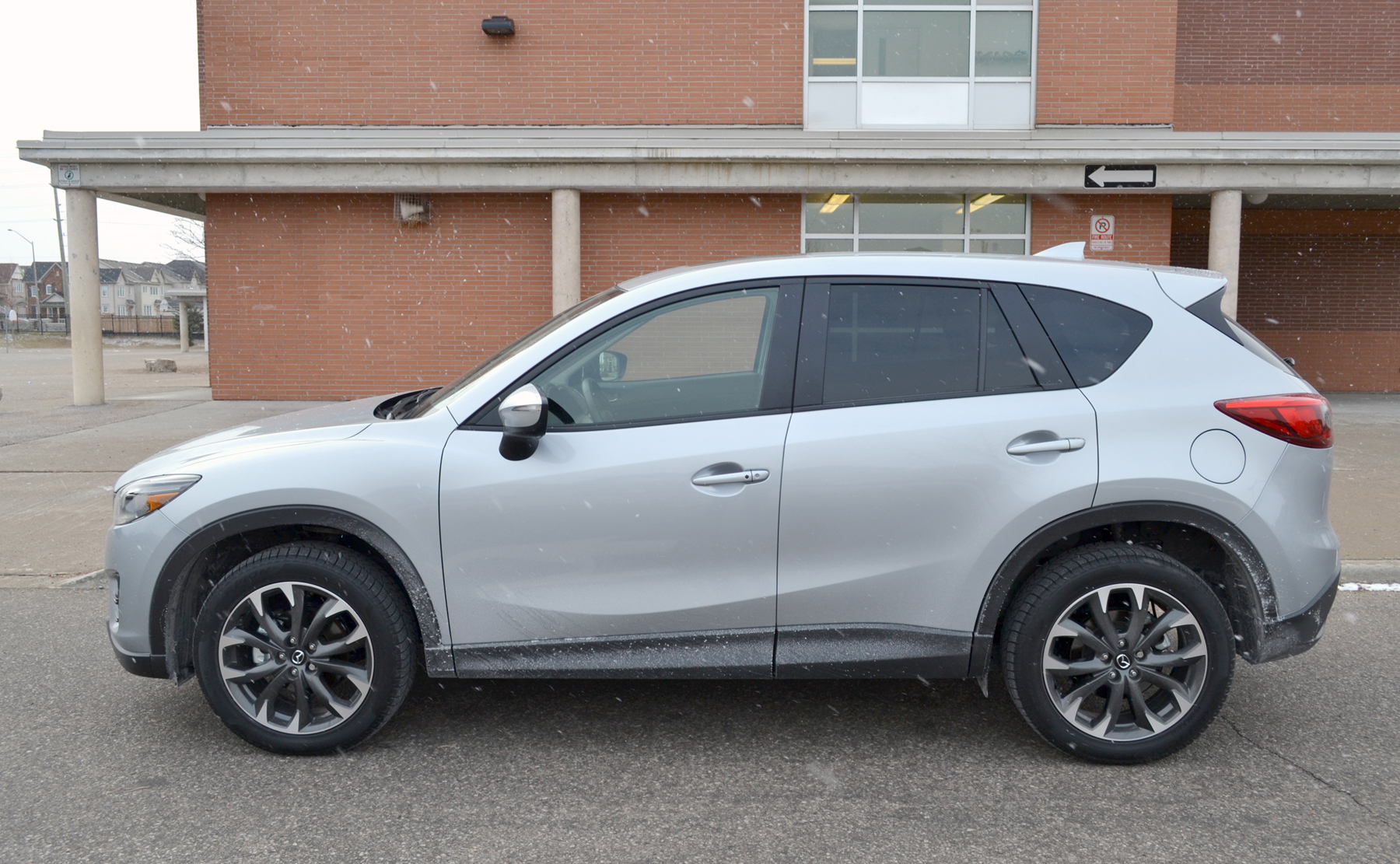 The 2017 Mazda CX-5 GT has standard all-wheel drive and plenty of room for growing families.

The same cannot be said for it’s bigger brother, the CX-5. This crossover had more than enough space inside and the drive was just as impressive as the CX-3.

I had the CX-5 GT AWD for the week. The CX-5 comes in three trims, the GX, GS and the GT. Depending on which trim you get and which model, the engine will be either a 2.0-litre or a 2.5-litre. The drive will be either front-wheel or all-wheel drive.

My CX-5 GT was the all-wheel drive which featured a long list of standard features and a $2,100 technology package which includes smart brake support, lane departure warning system and forward obstruction warning. 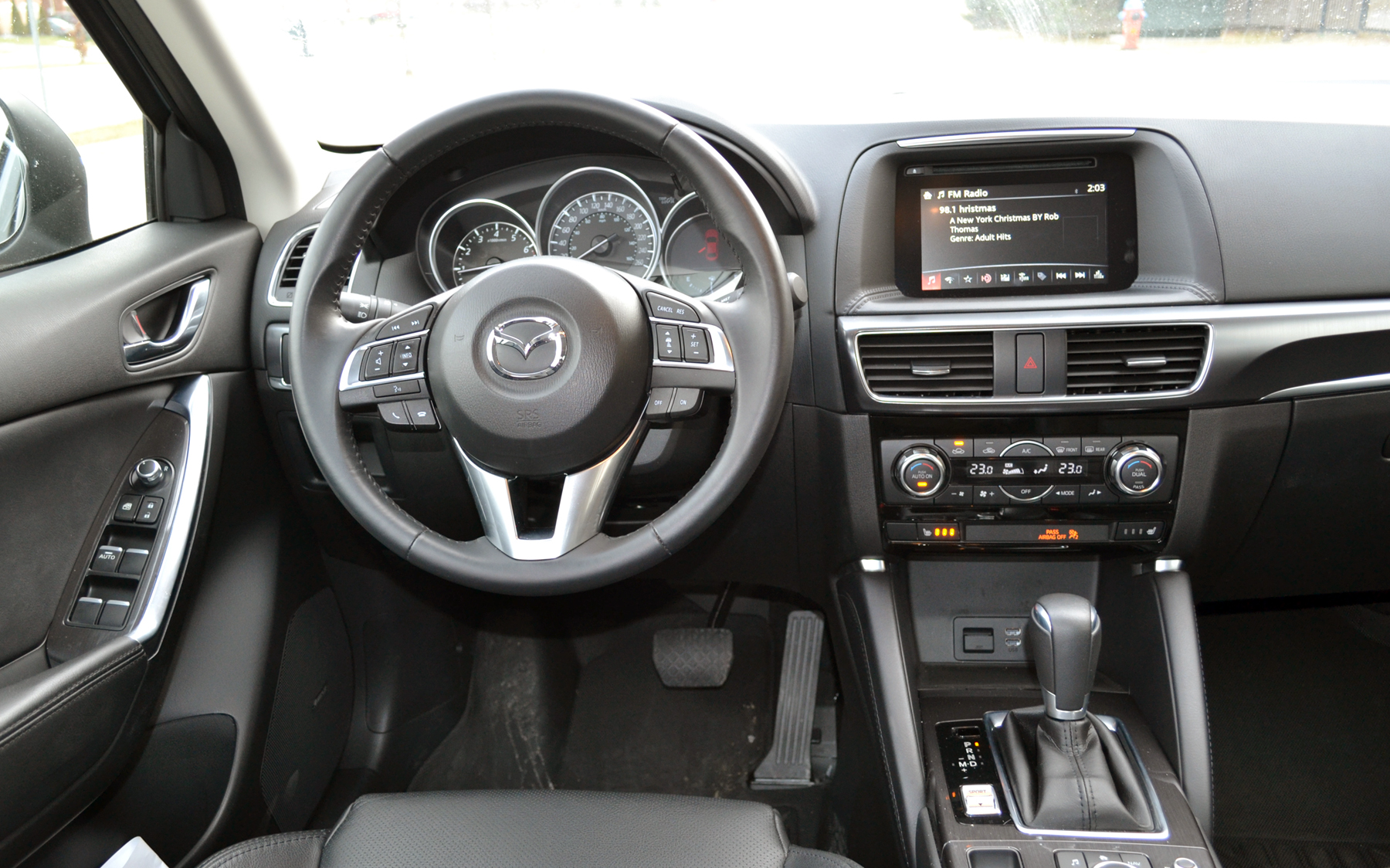 The interior of the 2017 Mazda CX-5 GT is well thought out with controls within easy reach.

But two standard options stood out for me during my week. First, the LED headlights were the best headlights I have seen in a while. 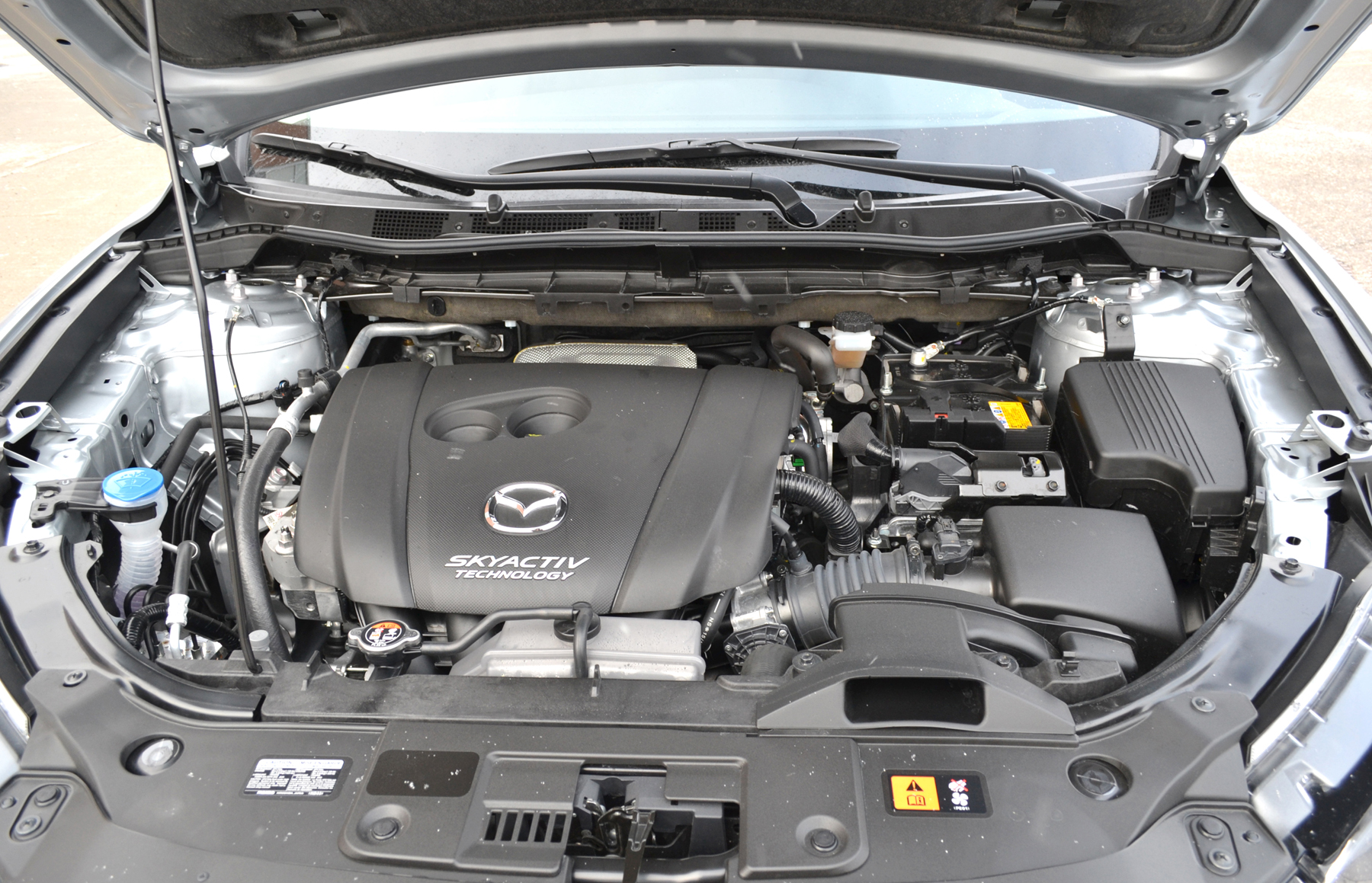 Maybe it’s because of the time change or because I did a lot of night driving this week but those headlights really gave me a great view of the road. I kept thinking I had the high beams on but no one was signalling me to turn them off.

The second standout was the sport mode.

With the sport mode off the CX-5 drives like many crossovers I have been in, but flip that sport mode button and the 2.5-litre DOHC 16-valve four-cylinder engine comes alive. 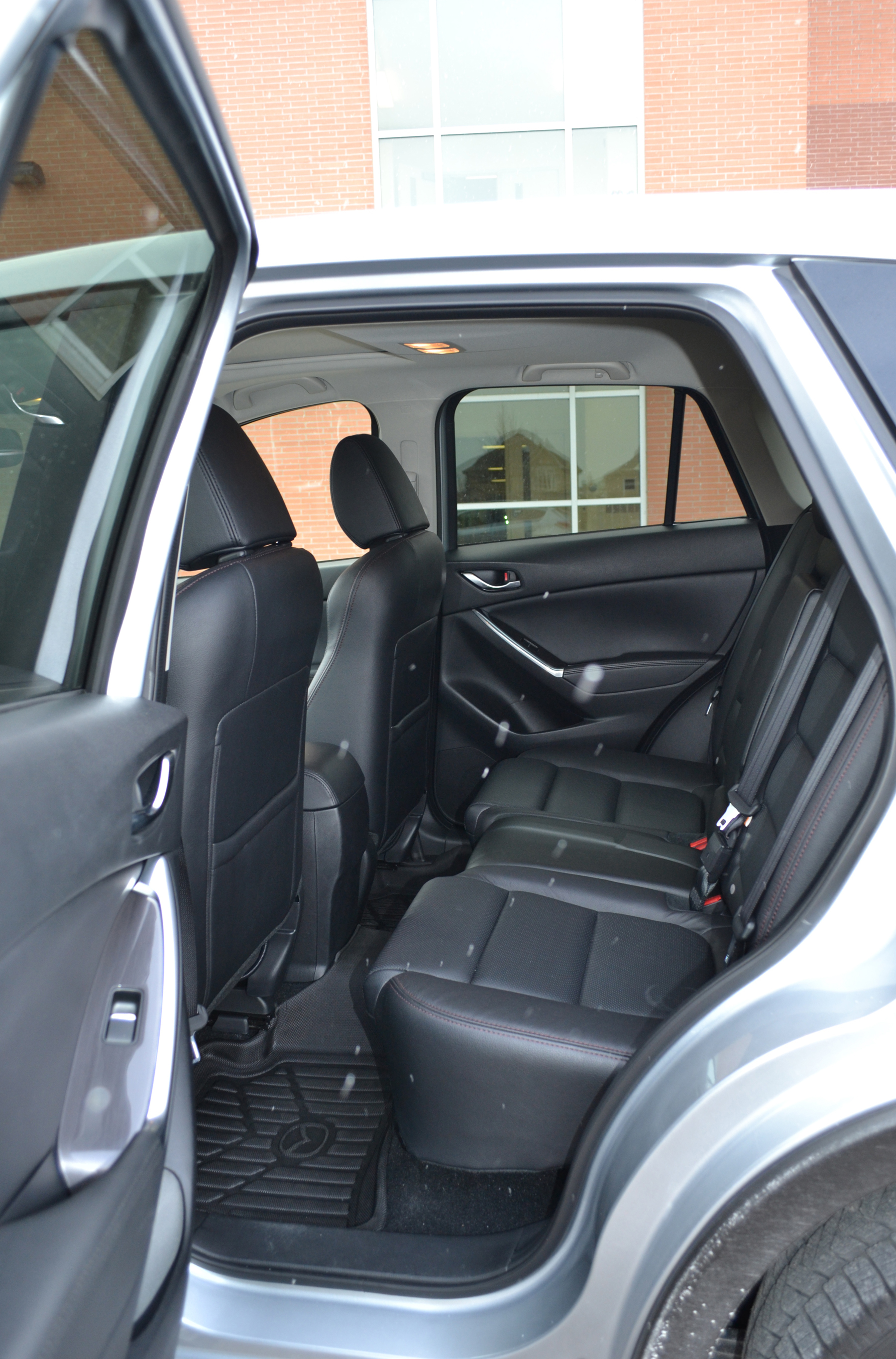 The back seat of the 2017 Mazda CX-5 GT has plenty of room for three adults.

You aren’t driving a muscle car but the sport mode gives you that extra oomph when you put your foot on the gas, with enough power to push you back into your seat. I left the vehicle in sport mode any time I was driving in the city and flipped off the sport mode when I was on the highway. While the sport mode is standard on the GT and GS it is an option on the GX, one I would recommend.

On the highway, the engine combined with the six-speed automatic transmission, provided adequate power for passing and getting up to speed.

Inside the CX-5 there is plenty of room for whatever you might need to carry, including the golf clubs that wouldn’t fit into the CX-3 I had this past summer. The back seat has plenty of elbow and legroom for three people. 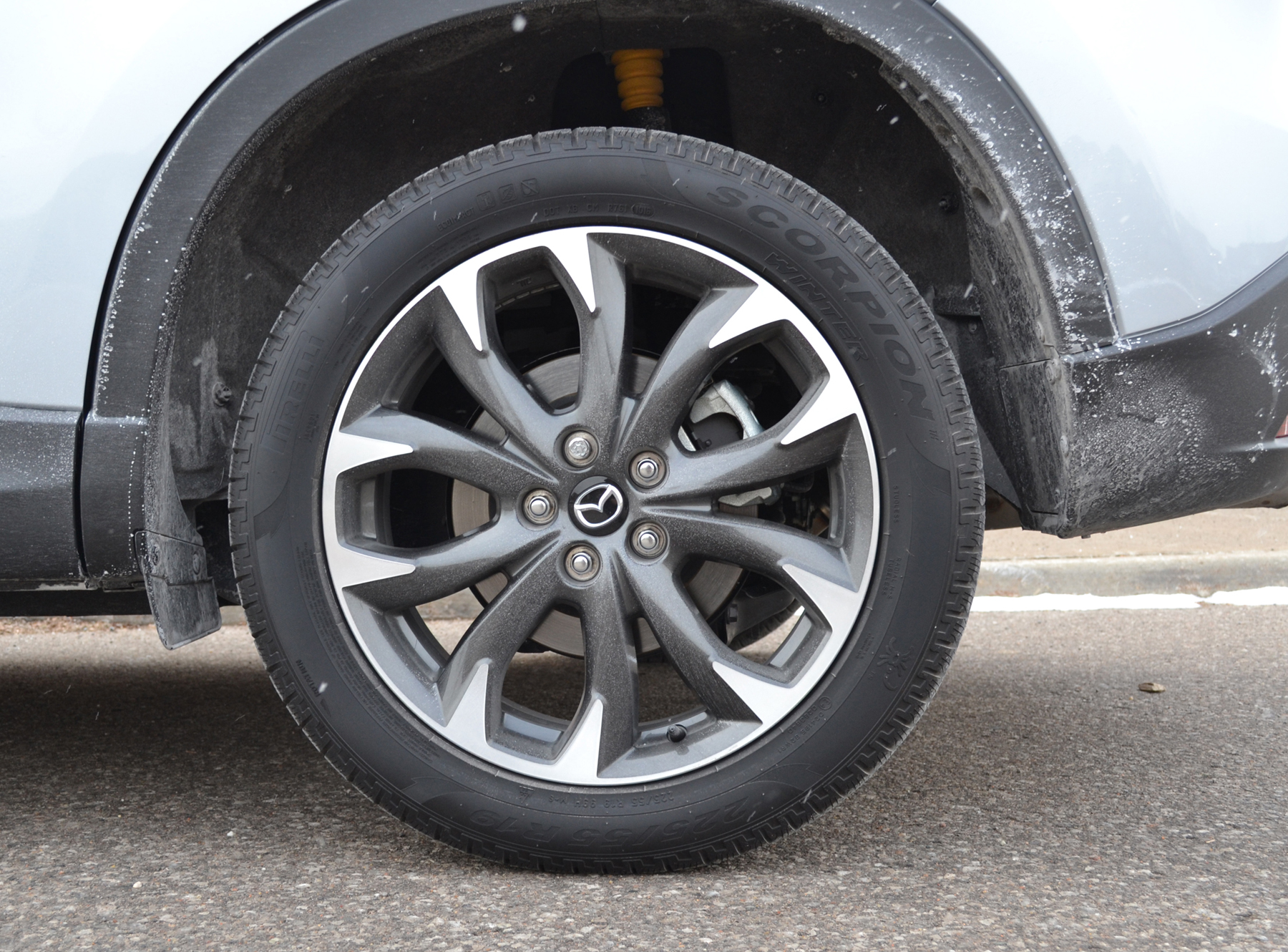 I will admit the Mazda entertainment system has taken me a while to get use to. Volume controls and the main control knob for the screen are on the middle console but I have become used to it. It does feel more natural to leave your arm on the console to flip to the navigation map than reaching for a button on the screen.

When the 2017 CX-5 was shown at the Los Angeles auto show, Metroland writers noted how Mazda was promising an improved ride and handling and a quieter cabin. 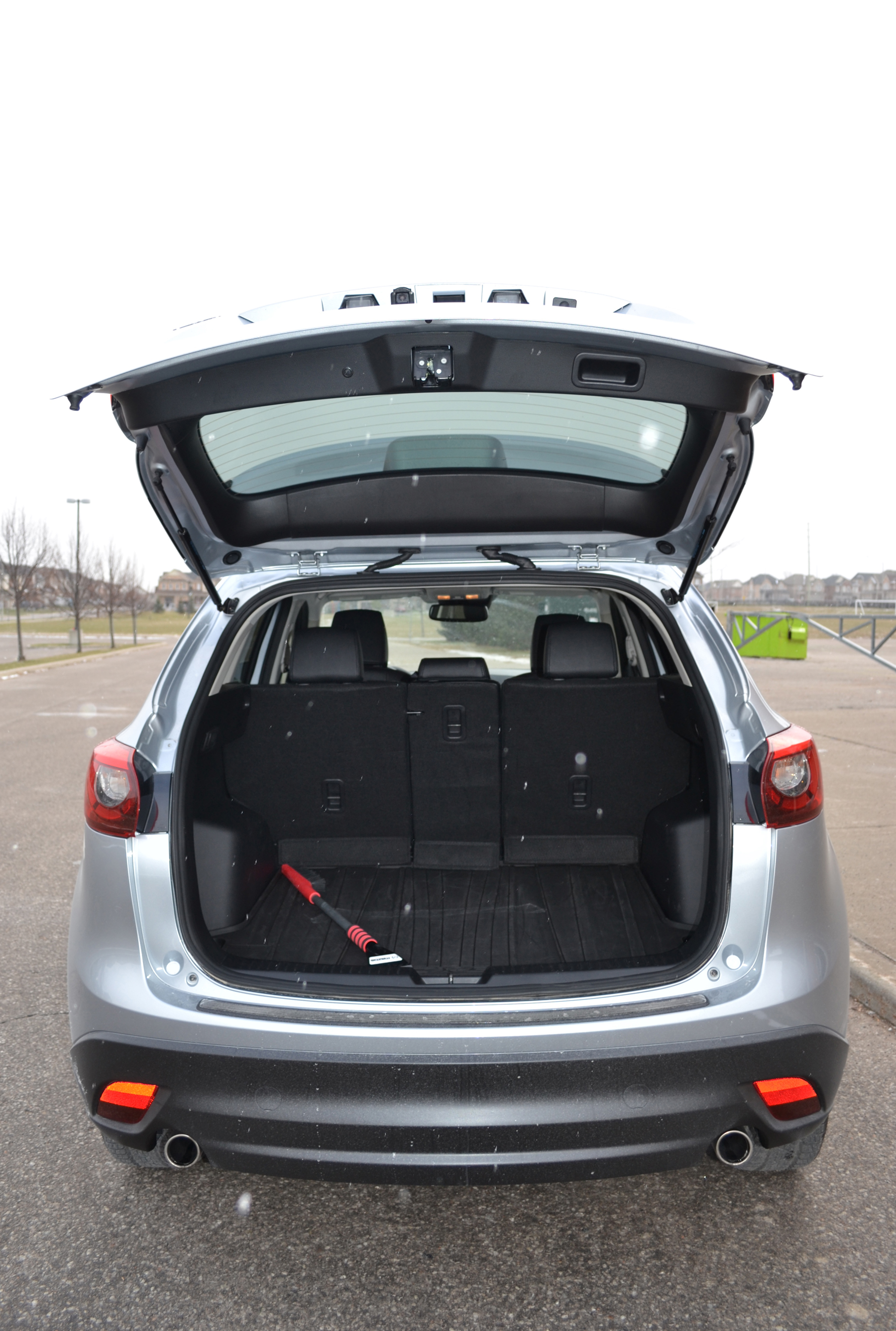 I can confirm the company has succeeded.

There can be no higher praise from a writer saying I would buy that vehicle. 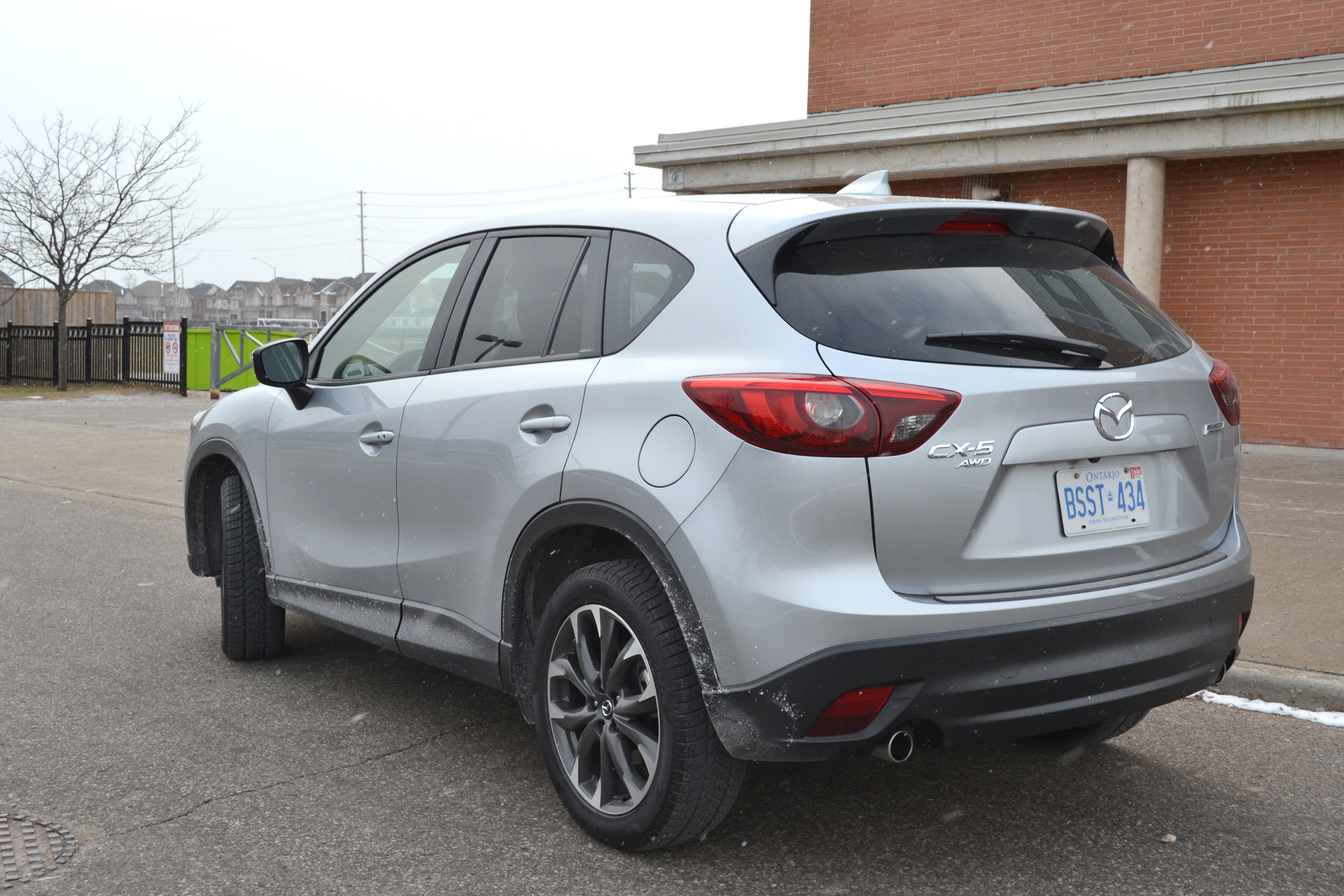 The rear of the CX-5 has taillights set high for better recognition from drivers following behind. Note the large rear spoiler designed to lessen drag.