Porsche 911 GTS is a year-round supercar

Clean lines, fabulous performance, and a great ride found in such a potent machine.

CAPE TOWN, SOUTH AFRICA-There used to be ‘the’ Porsche 911. Choose a colour, off you go.

Now, they could surely build the entire year’s production run of some 30,0000-plus cars and never build the same car twice.

Three body styles — Coupe, Cabriolet or Targa. Turbocharged engines in several performance levels, and depending on which you choose, there are variants in most of the three body configurations.

Just to confuse the issue, all 911s except the R and GT3 are now turbo, if not necessarily Turbo.

See what I did there?!! An upper-case ‘t’ means seriously Turbo … 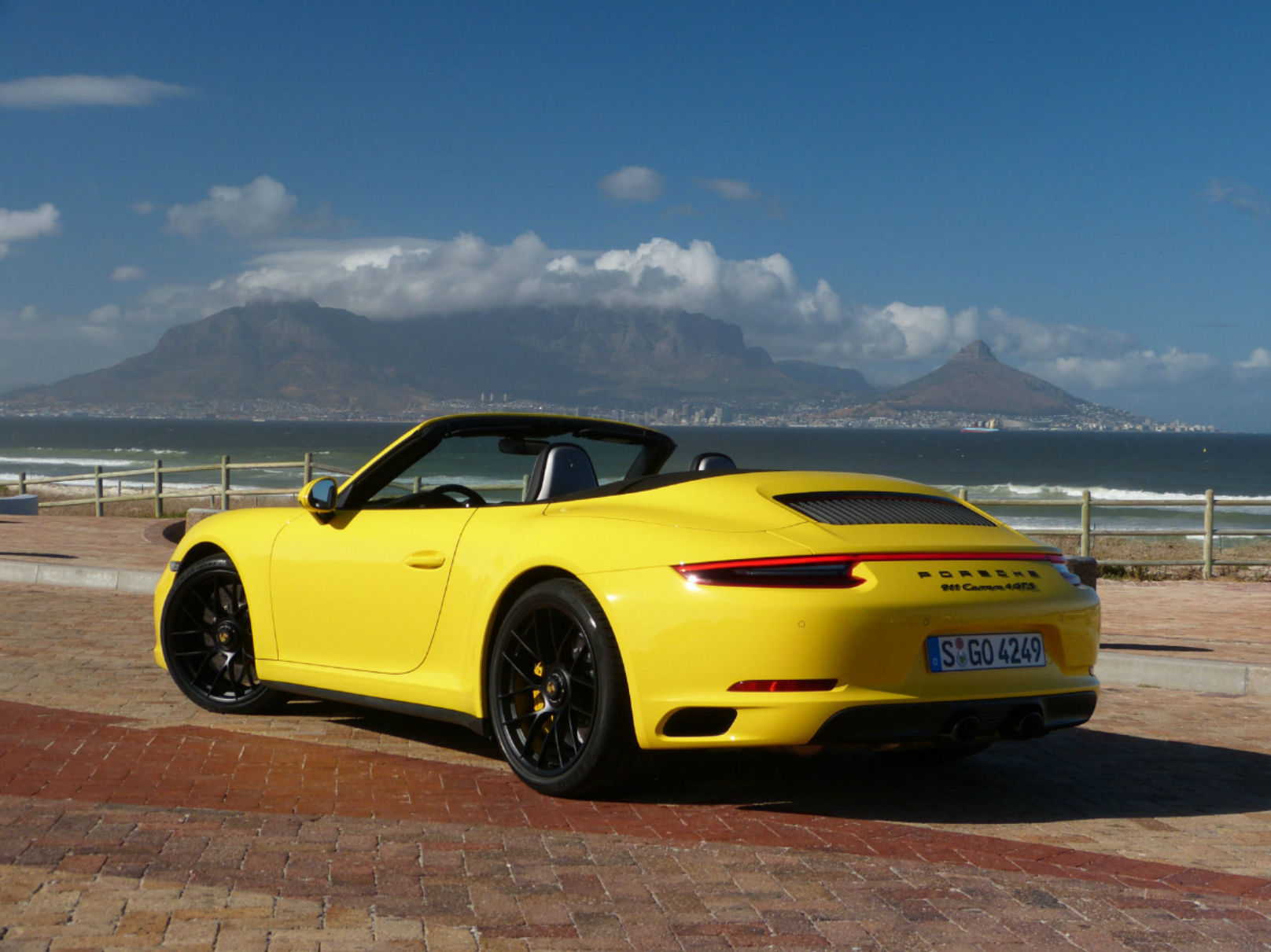 (I love writing “Dobbelkupplungsgetriebe.” I love saying it even more …).

An option list longer than a 911 Turbo S can go in 2.9 seconds; e.g. for an additional $220 on some models, you can have the caps on the wheels painted yellow instead of leaving them black.

The newest addition to the fleet — well, I haven’t checked my email yet today — might just be my favourite of the entire family.

It’s the 911 GTS, available in all three body styles with rear- or four-wheel drive, although I don’t see a rear-drive Targa model on their website. I’m sure if you asked nicely …

What makes the GTS so special? First, it looks sensational in its relative simplicity. It gets the wide-body treatment almost like the Turbo, but without the wings and other go-faster frippery.

You can tell the rear-wheel from the four-wheel drive models by the digit ‘4’ in the name badge above the rear licence plate. If you have trainspotter’s eyes, you might also notice that the thin strip between the tail lights is black on rear-drive models, and red (and illuminated) on four-wheel drives.

The tail lights on all GTS models have a cool-looking, blacked-out treatment. The wheels are also black. Looks pure. Those wheels and tires are also a size larger than those on the S. Brakes are uprated, too.

Inside, more sensible upgrades over lesser 911s, but nothing too over-the-top. Form-fitting sports seats have GTS logos, so your passengers know you’ve upped the ante. Alcantara — a $1,000 word meaning ‘plastic’ — adorns the steering wheel, shift knob, arm rests and some of the seating surfaces. You will probably think it’s leather, though.

Our mounts were left-hand drive in a right-hand drive country, which had the effect of taming our bravery just a shade. 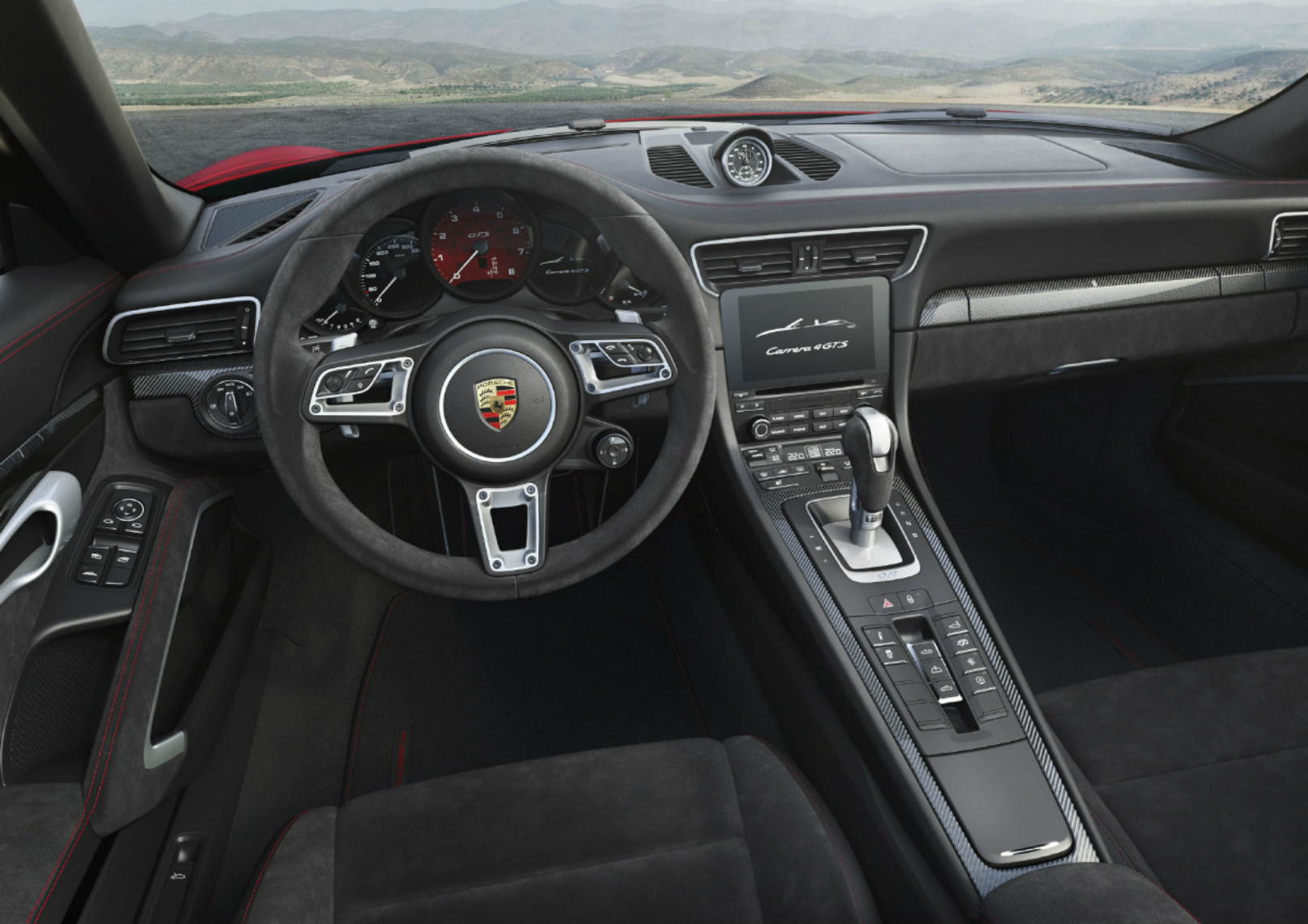 Porsche gives 0-100 km/h times of about four seconds with a bit of variation for body style and rear-versus-four wheel drive, and about four-tenths quicker with the PDK.

No, you can’t drive the manual quicker than you can drive the PDK. Get over it.

Old-time Porsche fans will have to get used to the characteristics of the turbo engine. It is probably as free of turbo lag as any turbo engine around. Maybe it was just my imagination because I knew what I was driving, but our test cars didn’t seem to have that razor-sharp throttle response we’re used to in older 911s.

No complaints, though. The GTS offers nice, balanced, accessible performance, and is a strong performer under any conditions.

The PDK does an almost supernatural job of knowing which gear you should be in. Sure, there’s the temptation to try and beat the system with the steering wheel paddles. Good luck with that. That said, we also enjoyed the manual gearbox. Shifts are as positive as it gets, clutch take-up is near perfect.

Also Read: Nissan GT-R is every Inch a Supercar

The Sport Chrono package — standard on GTS — includes a dash-mounted stopwatch, and the ability to choose Normal, Sport and Sport Plus drive modes, or ‘Individual,’ which allows you to select various settings for various driving parameters to your own taste, including shock absorber stiffness, exhaust note and, in manual transmission cars, automatic rev matching on downshifts, so even you can shift almost as well as my friend Marc Lachapelle does with a normal gearbox.

Some of the lesser roads we found south of Cape Town were less than perfectly surfaced, which meant we left the variable suspension in ‘Normal’ mode most of the time. We knew we would be getting some track time at the Killarney Motor Racing Circuit later in the day, so didn’t feel the need to terrorize the locals too greatly.

On the track, which was bumpy in spots, we went nose-to-tail in a small group of cars, following an expertly driven pace car. Every lap was recorded on video, superimposed upon which was a graphic showing our throttle position, steering wheel angle, and G-force meter, the sort of thing real race drivers use to monitor and improve their performance. I’m sure with a few more laps and some expert feedback, I could have been much faster.

As it was, the GTS is terrific at speed, stable in the corners and with outstanding brakes. We were obliged to leave the stability control system operational on the track, but the ‘Sport Plus’ mode allows a fair degree of freedom, only bringing you back when you are at or possibly just beyond the edge of disaster.

It’s the balance of attributes that makes the GTS my favourite in the 911 family. Clean lines, fabulous performance, excellent stopping ability, even good ride for such a potent machine. 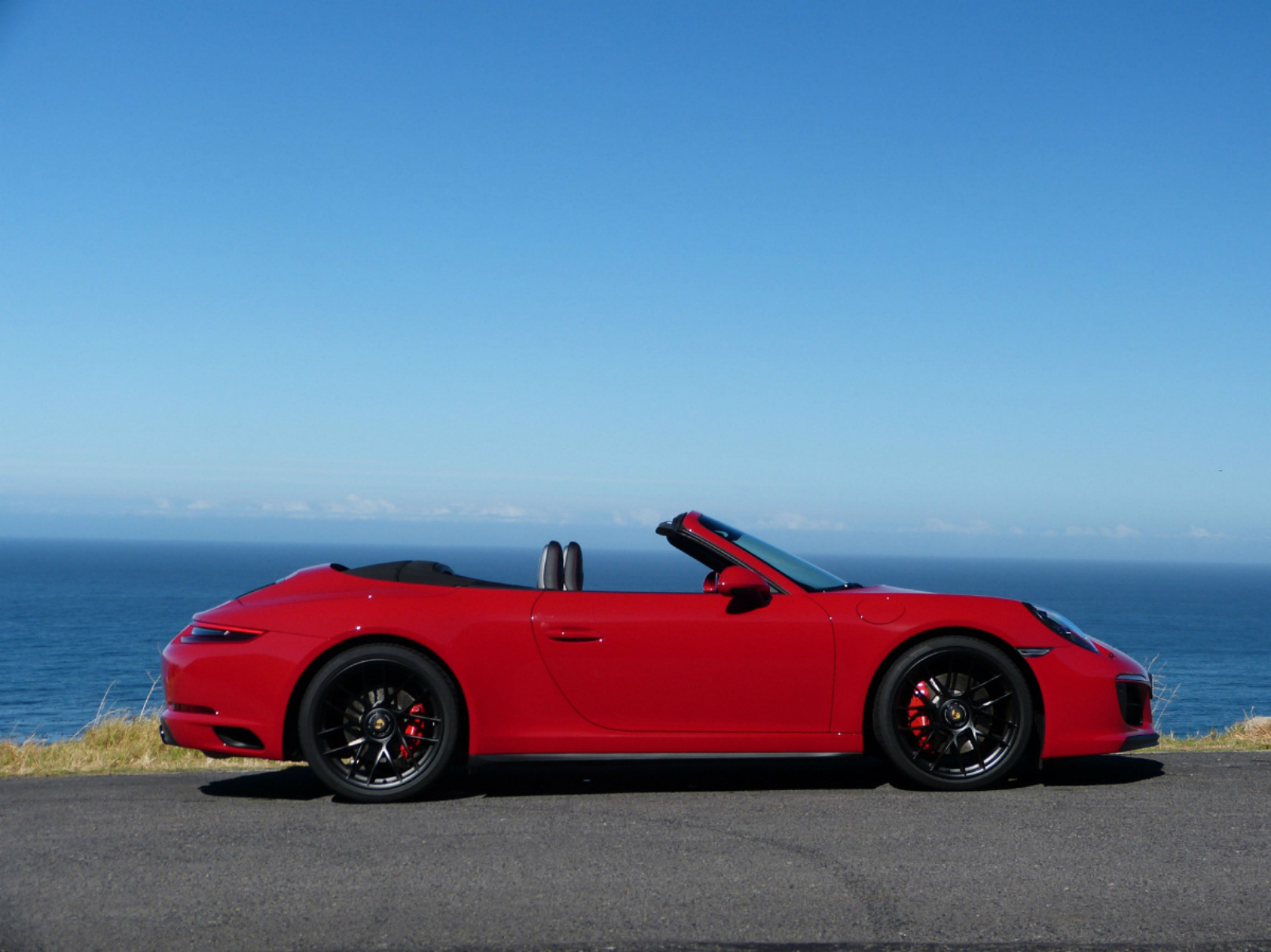 COMPETITION: Chevrolet Corvette (c’mon Porsche freaks, get over it); Jaguar F-Type; Nissan GT-R; possibly (if you will allow) certain models of Porsche Boxster/Cayman.