The Taycan delivers electrifying performance, but it’ll cost you.

The classic definition of a “Grand Touring” (a.k.a. GT) car was one that could:

1) whisk two people and their stuff,

As for the Porsche Taycan Turbo S (that’s TIE-conn, not TAY-cann, never mind how it’s spelled), the old Meatloaf song comes to mind: “Two out of Three Ain’t Bad.”

1) “Two people and their stuff”? Taycan has that covered; the reasonably sized rear seat in the four-door car handles two more riders.

More on this in a moment.

First, a few words about the car. 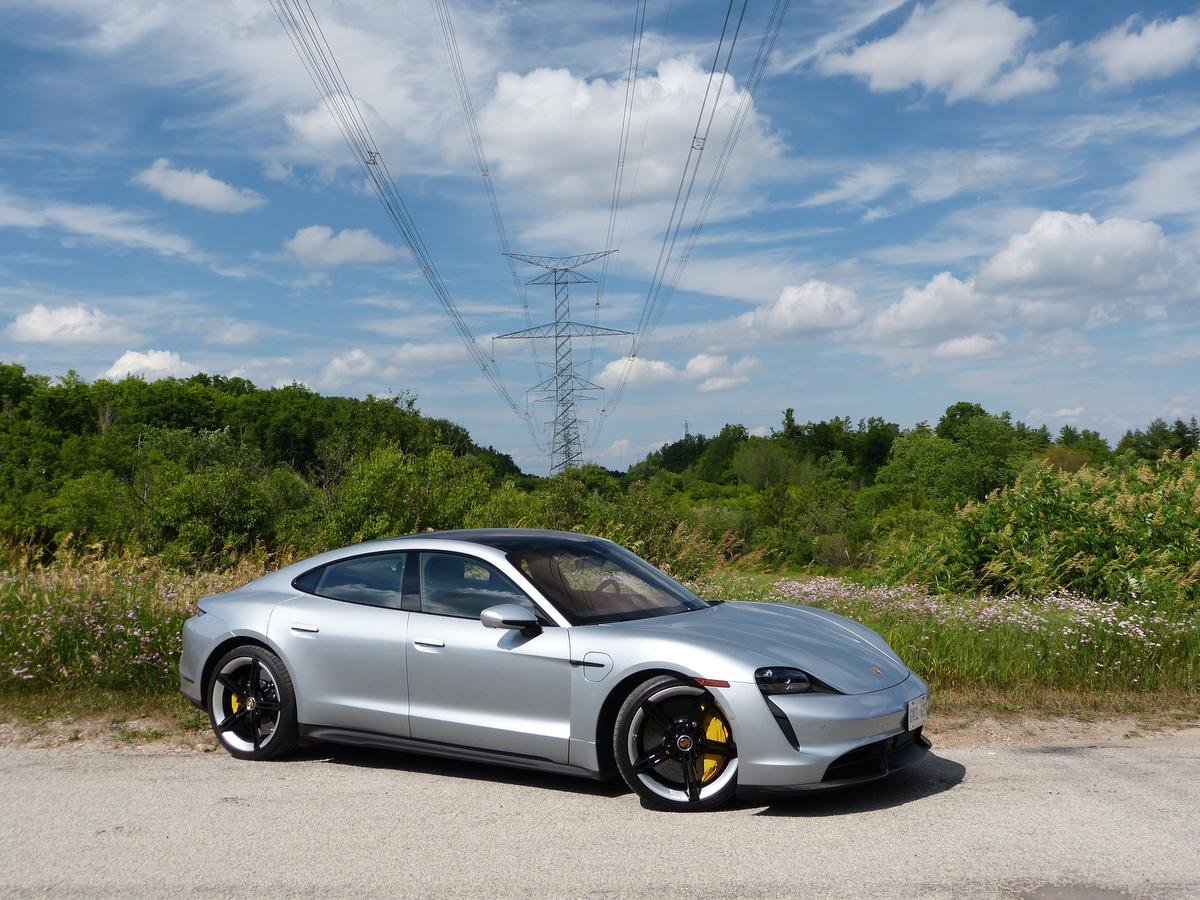 Lovely inside too, although some of the black plastic bits inside look, in the immortal words of one of my colleagues, like a cheap Korean stereo.

The name intrigues. “Turbo?” In a battery-powered car?

And the battery level indicator logo is — yep, a fuel tank!

Surely they aren’t just using bits from the existing parts bin to save a few bucks?

The centre touchscreen is one of the largest this side of a Tesla.

One YouTube video host spends 20 minutes talking about these screens and doesn’t begin to cover all the details. 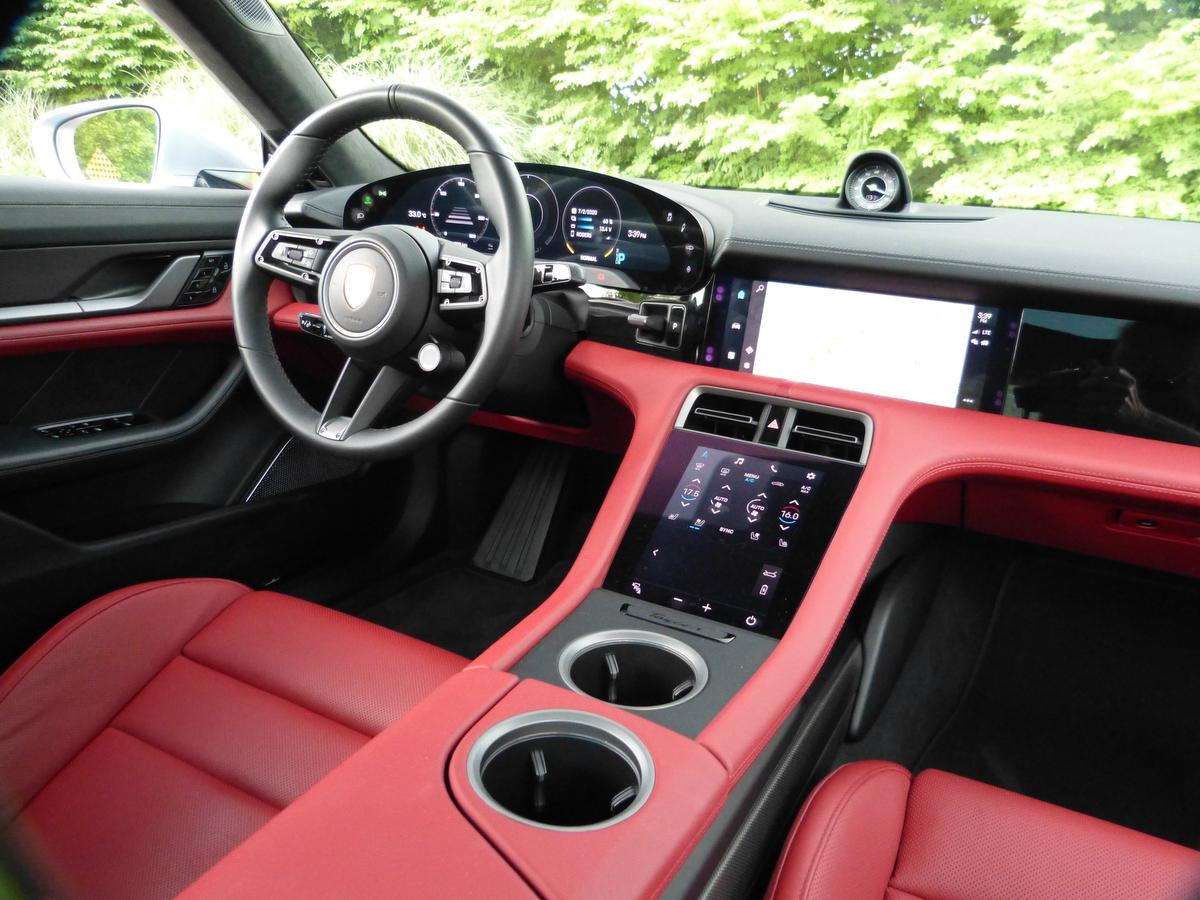 You may have seen the cartoon of a kid walking along the street, head down, staring at his phone, and walking into a telephone pole?

Kinda funny at a 6 km/h walking pace. Not so much at a buck-twenty.

This screen is beyond hopeless. There are a million options, none of which you can begin to work without taking your eyes off the road because there is no tactile feedback, no way of telling by touch which “virtual” button you are trying to hit.

Especially in a car this fast.

Run over a gnat, never mind a concrete highway expansion joint, and you won’t be changing the radio station, you’ll be phoning your boss.

Voice control? Not a chance.

Repeat after me: Round knobs; tactile switches.

Porsche used to do this so well. What the heck happened?

Rip it out and start over.

Oh yeah, and fire the 14-year-old kid who designed it.

Also, fire whoever screwed up the headlight switch.

Again, Porsche used to do this right. Turn the knob — yes, a knob!! — full right when you buy the car, and never touch it again. Car on, lights on; car off, lights off. What could be simpler?

Now every time you shut the car off you have to reset the lights, or you only get front daytime running lights.

Assuming you haven’t run into something thanks to this dashboard before you barely get started, the car drives and handles brilliantly.

Ride is firm, but acceptable given the performance level.

It’s fast, as noted. Acceleration is immediate and breathtaking.

Will our grandchildren wax lyrical about “electric motor” sounds, the way we did over the exhaust roar of a Chevelle SS 396?

Weird how there’s “idle creep” in this car. Stop at a light, take your foot off the brake, and the car creeps forward. Is this another trick to make you think you’re in a gasoline-engined Porsche?

The carbon ceramic brakes are spectacular.

Now, about that “long distances” thing.

Want to “Grand Tour” to Montreal from Toronto? You’ll have to program in a lengthy battery recharge session around Brockville, because Taycan can only give you a maximum of 387 km on a full charge.

That’s in summer. Winter (in Canada?? I know; hard to imagine…) will be worse.

And we’re talking Ontario. The car is capable of over twice our speed limit; how much range you’d get on German Autobahns I can’t imagine. It won’t be better, but that’s not my problem.

Taycan only offers 220-volt recharge capability, so you’ll have to hope that whatever rest stop you choose has one of those. There’s no topping it up at home unless you’re prepared to fork over about five grand for a 220-volt charging system. 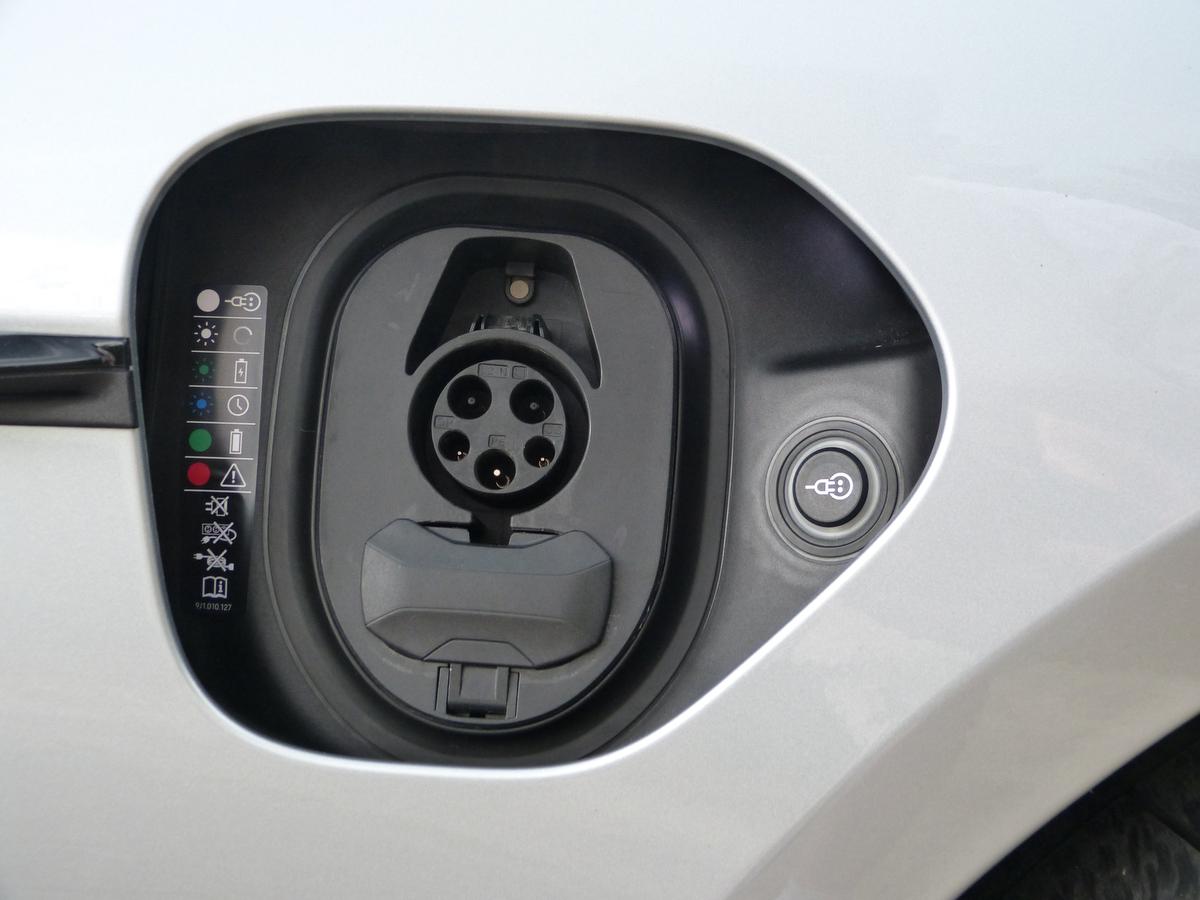 The first stop on Petro-Canada’s “electric highway” is in my home town of Milton. I took the Taycan there and plugged it in. There are dozens of fuel pumps, mostly all busy. There’s room for just two electric cars at once. I was the only one there…

The charging rate drops as the battery gets filled up. Most electric car owners will shut it off around 80 per cent, to trade off range for recharge time.

But as I’ve said before, if the demand for electricity goes up and demand for gasoline goes down, what happens to their respective prices?

Not to mention what governments will do to replace lost fuel taxes.

So the Taycan Turbo S is a fast, comfortable, excellent-handling long-distance touring car that does everything well — except travel long distances.

It might be the most capable commuter car you’ll ever buy. Saves on fuel too.

You’ll just have to come up with a quarter of million dollars to realize that saving.