Do you need a vehicle with the performance of the Audi SQ7? Of course not, it’s too ridiculously powerful.

MULHOUSE, FRANCE—Do you need a vehicle with the performance of the Audi SQ7? Of course not, it’s too ridiculously powerful.

Look at these specs: 435 horsepower and a massive 664 lb-ft. of torque from its 4.0-litre diesel V8. It’s boosted by twin turbochargers that are themselves helped by a dedicated 48-volt compressor, for almost instant peak pulling power almost from idle.

Compare that to the regular 3.0-litre Q7, which drives fine, but it makes less than half that amount of torque and actually weighs 300 kg less. Who needs an S version?

RELATED: Room for Seven and Endless Luxury: The 2017 Mercedes-Benz GLS

Nobody, but plenty of people want one, since performance premium SUVs are one of the fastest-growing auto segments right now. Drivers around the world can’t get enough of them, and those with the means to indulge themselves want the best of all possible automotive worlds: a large, comfortable, macho SUV with the prowess of a sports car.

It can be done, but it’s not easy, which is why they’re expensive. Prices aren’t announced yet, but the SQ7 will surely cost more than $100,000 when it comes on sale in Canada in the fall of 2017. It’ll be on the market in Europe this summer, but Audi Canada’s in no hurry since the new Q7 has only just arrived here. 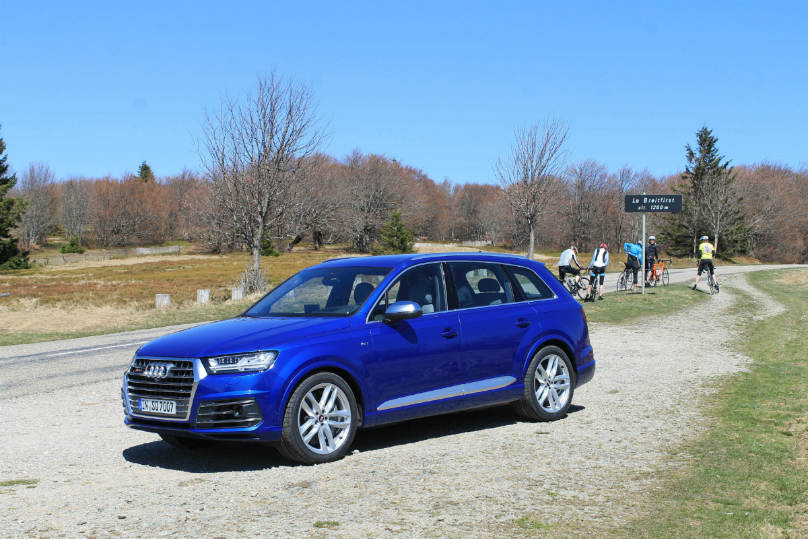 How does it do it? Well, consider that 48-volt compressor, for a start. It’s there to deal with any turbo lag — the hesitation in power that happens when you stomp on the throttle. In any normal vehicle, the engine’s hot exhaust gas is routed into the turbo and spins it at incredible speed to push more air into the engine, but it takes a while to get up to that speed. The compressor, however, can reach 70,000 rpm in less than a quarter of a second to boost the engine while it’s waiting for the turbo to kick in.

This means there’s essentially no turbo lag, though there is still some hesitation if the eight-speed automatic transmission needs to drop down a few gears. It’s not much, though — maybe a couple blinks of an eye — and peak torque is available at just 1,000 rpm. Its acceleration is for sure like sports car’s: the SQ7 will surge from standstill to 100 km/h in 4.8 seconds, which is impressive for a vehicle that weighs 2,270 kg. That’s the five-seater; add an optional third row to seat seven and you’ll add an extra 60 kg. 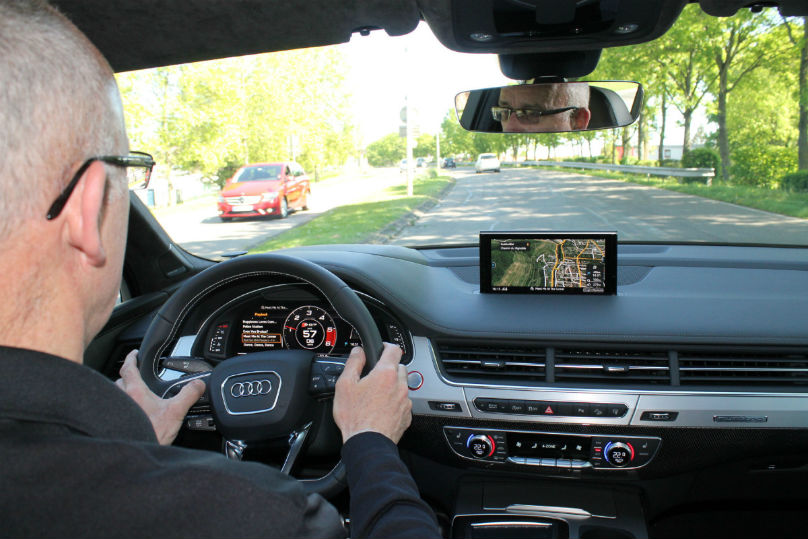 This is a big vehicle, so Audi’s tuned the chassis to help it corner more quickly, as well as safely. It goes without saying the body is as stiff as it can be, and its permanent all-wheel drive comes standard with adaptive air suspension and a “dynamic handling system” that improves on the Q7’s setup.

I’m sure that works well enough, but all the test vehicles here in the French mountains were equipped with the optional “driving dynamics package,” which includes a sport differential, all-wheel steering and active roll stabilization. 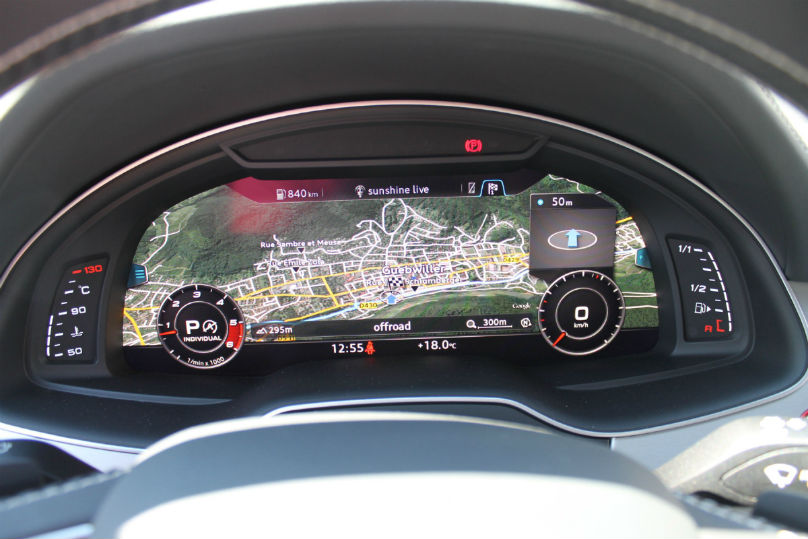 The sport differential sends additional power to the outside rear wheel driving in a curve to help the SQ7 dig into the road and keep things stable. The all-wheel steering works in the same way as it does with the new Porsche 911, so the rear wheels turn a few degrees on corners to keep everything tight; at higher speeds, they turn in the same direction as the front wheels, and at lower speeds, below 15 km/h, they turn in the opposite direction. This trims a metre from the Q7’s turning circle.

The active roll stabilization is the really clever stuff. The rear stabilization bar is split in two so the ride is not too stiff on bumpy roads, but on fast curvy roads, an electric motor will twist the two halves of the bar together hard enough to effectively create one rigid bar. It gets its power from the 48-volt electric system fitted for the turbo compressor. It will probably be adapted to power a hybrid battery sometime soon. 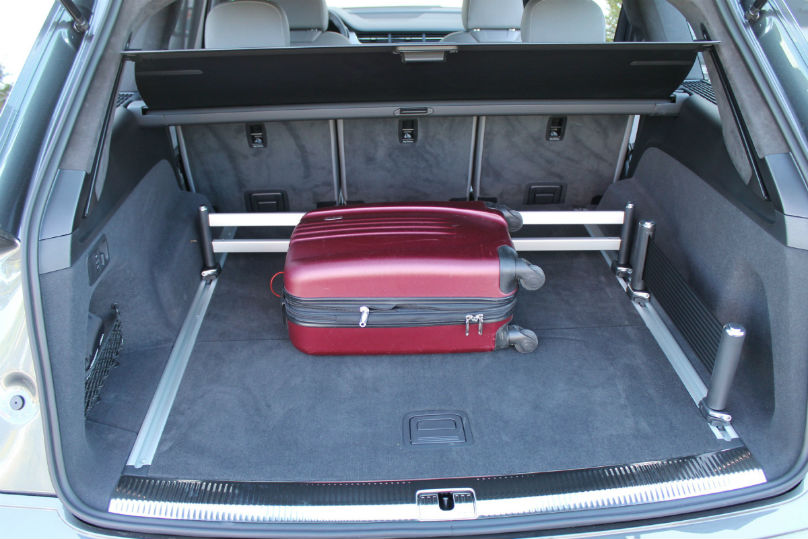 There’s more of course, much more, but the end result of all this wizardry is a smooth, comfortable, refined SUV that will go like stink if you want it to. I wouldn’t know: I drove on public roads here with speed limits and competitive cyclists at every curve, so I never really pushed it. The heated seats are nice, at least.

If you drive conservatively, which few owners will or should, you’ll get a respectable average fuel consumption of 7.2 L/100 km. That’s in Europe; Canadian figures are calculated differently and have not yet been released.

The price hasn’t been released either, because a lot could happen to the Euro in the 15 months before the SQ7 comes to Canada. You can expect it to be priced against the BMW X5 M and the Mercedes-Benz GLE 63S AMG, which means it’ll probably start around $105,000.

Is it better than those SUVs, or even the more costly Porsche Cayenne Turbo or Range Rover Sport SVR? There’s not much in it, to be honest. But it puts Audi directly into the sought-after segment with a halo SUV and they’re sure to sell every one they bring into Canada. Logic, sensibility and reason be damned — you only live once, right? 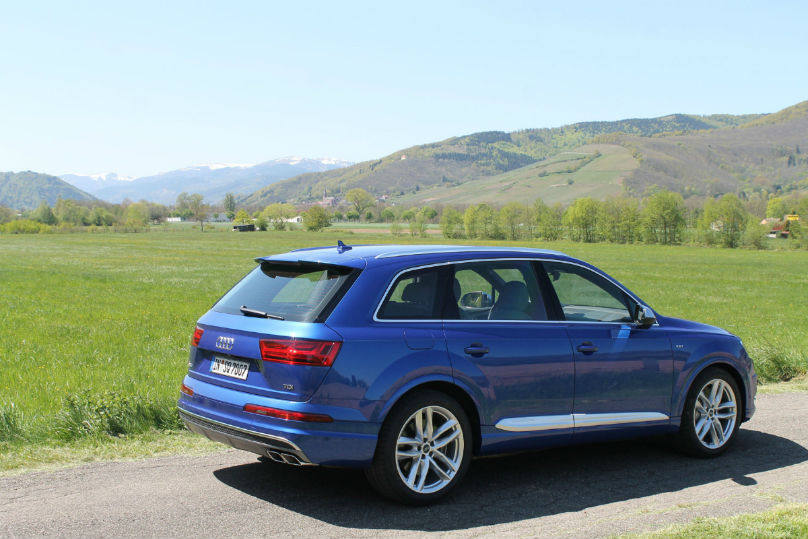 Looks: Sporty for an SUV

What you won’t like about this car: Your partner won’t understand it

Travel and other expenses for this trip were covered by the manufacturer. To send feedback, email wheels@thestar.ca and put Mark Richardson’s name in the subject line.