After an 8-year hiatus, the Camaro was reborn for the 2010 model year sporting retro-modern styling that didn’t stray far from the concept shown a few years earlier. And scoring a leading role as Bumblebee in the Transformers movie was a stroke of marketing genius resonating with the public in a way that only Hollywood could, helping sales surpass its pony car rival—the Mustang—for the first time in history.

Where the Mustang still retained its live rear axle the Camaro took a more modern approach borrowing the Zeta chassis from GM’s Australian subsidiary, Holden. This well-sorted and proven platform came with a fully independent rear suspension, another first for the Camaro. A car that wouldn’t have existed if it weren’t for the Ford Mustang coming on to the scene in 1964, capturing a much younger and relatively untapped market.

The Mustang’s success fueled a rivalry that still goes on to this day and although the Challenger is included in this segment, it’s a much larger car than the other two and doesn’t fare as well on roads that aren’t perfectly straight.

Besides, let’s face it, the Pony car wars have always been between the ‘Stang and the Camaro. And it probably always will be.

A brand new Mustang arrived in 2015 and like the Camaro, it also conceded its live rear axle in favour of an independent rear end making it more of a true sports car and less of an old-school muscle car. It might not have pleased purists but it elevated the ride and handling to new levels and made it more competitive with the Camaro in this department. And it worked. Sales once again saw a sharp uptick and ended the Camaro’s brief tenure at the top.

But a good car isn’t always a sales champion and this Camaro, redesigned for 2016,  is not just good, it’s brilliant. A fact that was obvious after just a few minutes behind the tactile perfectly sized steering wheel. Sometimes you don’t have to go very far to get a feel for how an automobile will behave over the long haul. Good cars are like that, and the main reason the Camaro feels like this is because of the switch to GM’s Alpha platform also found under the Cadillac ATS and CTS. This was a platform conceived to take on the best European sports sedans and boasted a very stiff and light structure that proved an excellent foundation for world-class driving dynamics. 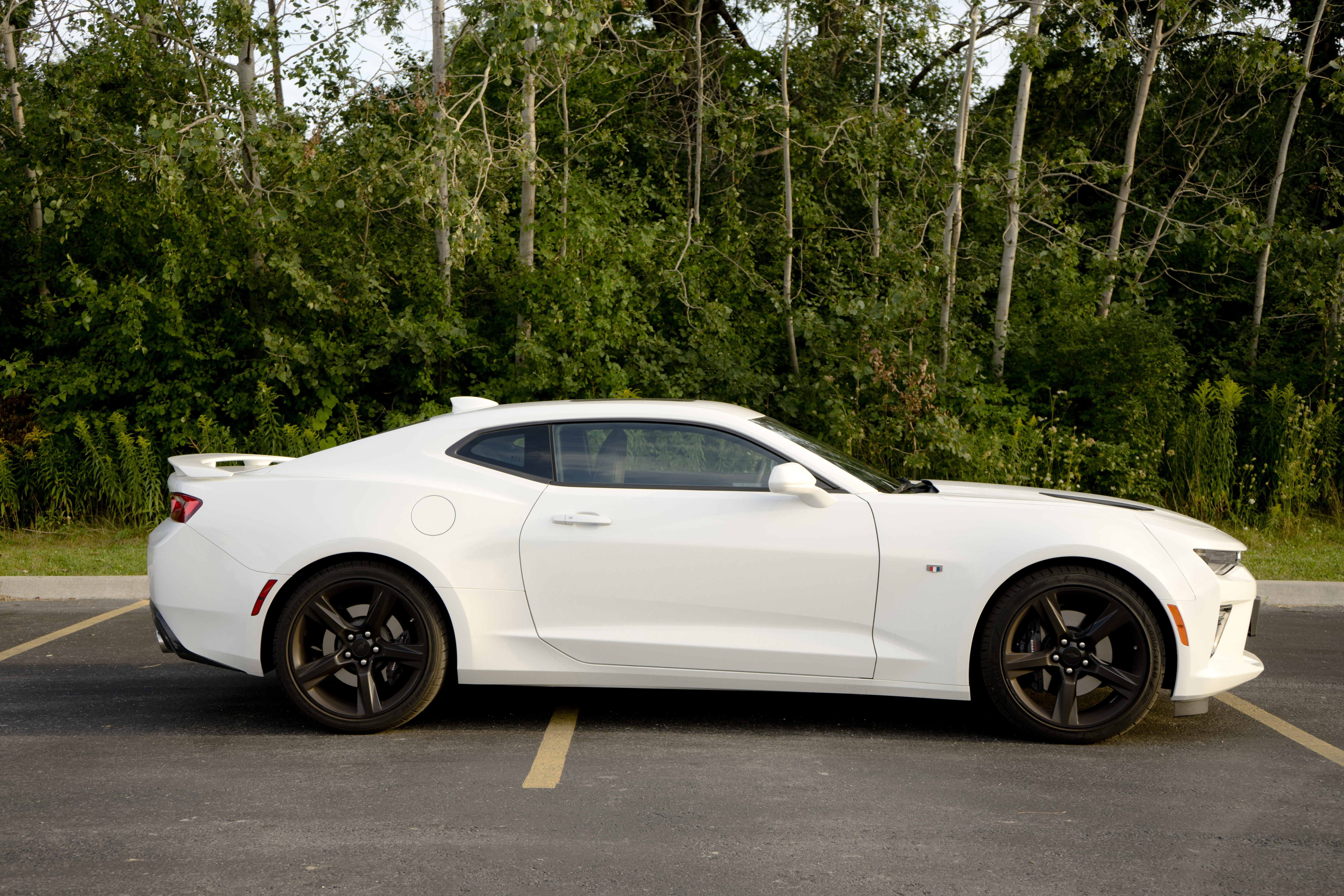 It helped the new Camaro shed lots of unwanted weight, a sore point of the previous generation. And shedding weight is one of the best ways to make a car better in the corners.

Blessed with excellent suspension tuning, the Camaro was an absolute joy to throw into bends at any speed displaying fast turn-in, tons of front-end grip, minimal body roll, and one of the best electric steering racks this side of a Porsche 911. It feels downright racy. The optional magnetic shocks fitted to my tester play a factor here and are available as a stand-alone option on the SS. Without a doubt, get them!

I wasn’t expecting a cushy ride. The SS is a track-focused car. Expansion joints and road imperfections come through loud and clear, but it never gets out of hand and those magnetic shocks take the edge off most bumps.

All SS Camaros come with high capacity cooling for the engine oil, transmission, and limited slip differential allowing you to track it with confidence.

The Camaro feels like a tank during repeated lapping, something I found out at CTMP recently where it just soaked up the abuse of high-speed track driving, giving the impression that it could be out there all day long. This is where you really feel how good this chassis is. There are zero signs of dreaded understeer. It remains balanced and controlled through high-speed corners and soaks up curbs like they weren’t even there.

All the Camaros at the track that day were equipped with the 1LE track package ($8,495) that upgrades to 6-piston Brembo brakes, throws in an electronically controlled limited slip, magnetic ride control, a dual mode performance exhaust, and fat 305 section rear tires. It also comes with excellent Recaro sports seats, a grippy micro suede steering wheel, and much more than I’m willing to list.

A 1LE equipped SS has more than 1G of stick in the corners before the tires begin to let go and when that happens it does so progressively giving you lots of time to rein it in.

The nice thing about the 1LE package is that you can only get it when you equip the 6-speed manual, which has short positive throws and feels just as beefy as the rest of the car.

One of the biggest let downs with the Camaro I was driving for the purposes of this review was the 8-speed automatic. A scheduling kerfuffle meant that I ended up getting the wrong car and the manual-equipped 1LE went to another outlet. Saddled with the slushbox, I did my best to keep an open mind and give it a fair shot at impressing me. Sadly, it did not.

I’ll give it points for smoothness, but in terms of shift speed, it’s slow. Pulling the paddle brings what feels like a half second delay before the next gear arrives, even when the drive mode controller has been switched to Track mode. It’s easy to hit the limiter and cut off fuel unless you time the shift for about 500 rpm before actually hitting redline. Many of the automatics I test on a frequent basis are capable of swapping gears much, much faster. 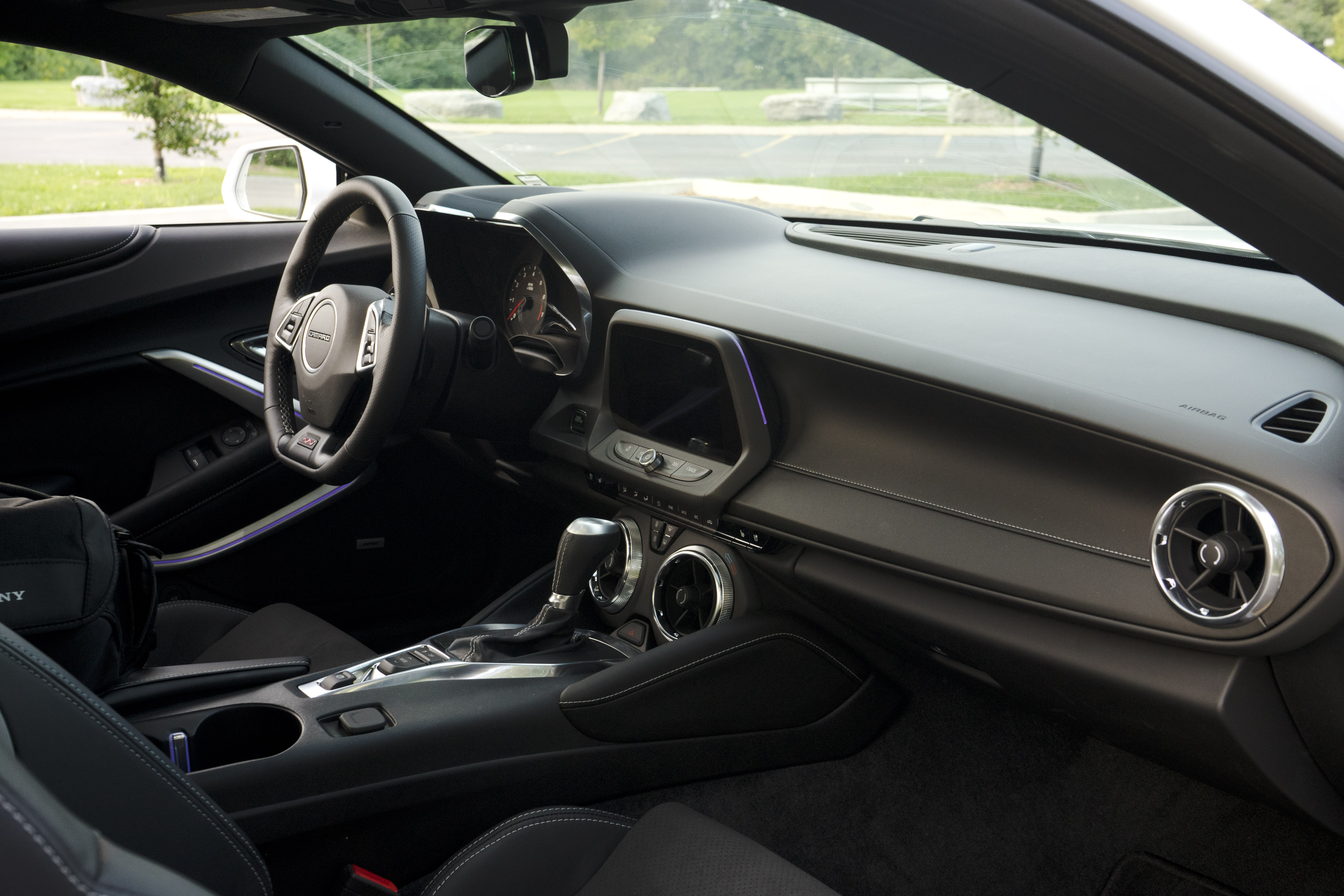 The take rate for the automatic is undoubtedly higher than the manual anyways and if you’re buying a Camaro mainly for that leisurely Sunday cruise then it will more than fit the bill. But in a sports car with this level of capability the manual box makes much more sense.

You need to know what you’re getting into when buying a Camaro. Any Camaro. Whether you spring for a 4-cylinder model or the monstrous LT4 V8 powered ZL1, you’re buying a car that takes practicality and chucks it right out the window. Door pockets are hilariously small, barely big enough to collect dust. Centre console storage? There’s some. Enough for my clip-on wallet, but definitely not Costanza’s. Trunk space is ok, but the opening is tiny and has been unofficially named the “manhole”.

A wireless phone charger, standard on the 2SS trim line, is integrated into the back of the centre armrest behind the cup holders. Conveniently placed for rear passengers to access. Assuming, of course, that you could shoehorn a willing passenger back there without causing them bodily harm. The rear seat legroom should be listed as a negative number and I doubt even small children could fit.

Despite this, there were latch anchors in the back and I was just about able to squeeze in a forward-facing car seat and take my one-year-old for a ride which he enjoyed very much, seemingly falling victim to the sweet music coming out of the optional dual-mode exhaust whenever throttle was applied. Just like his dad. 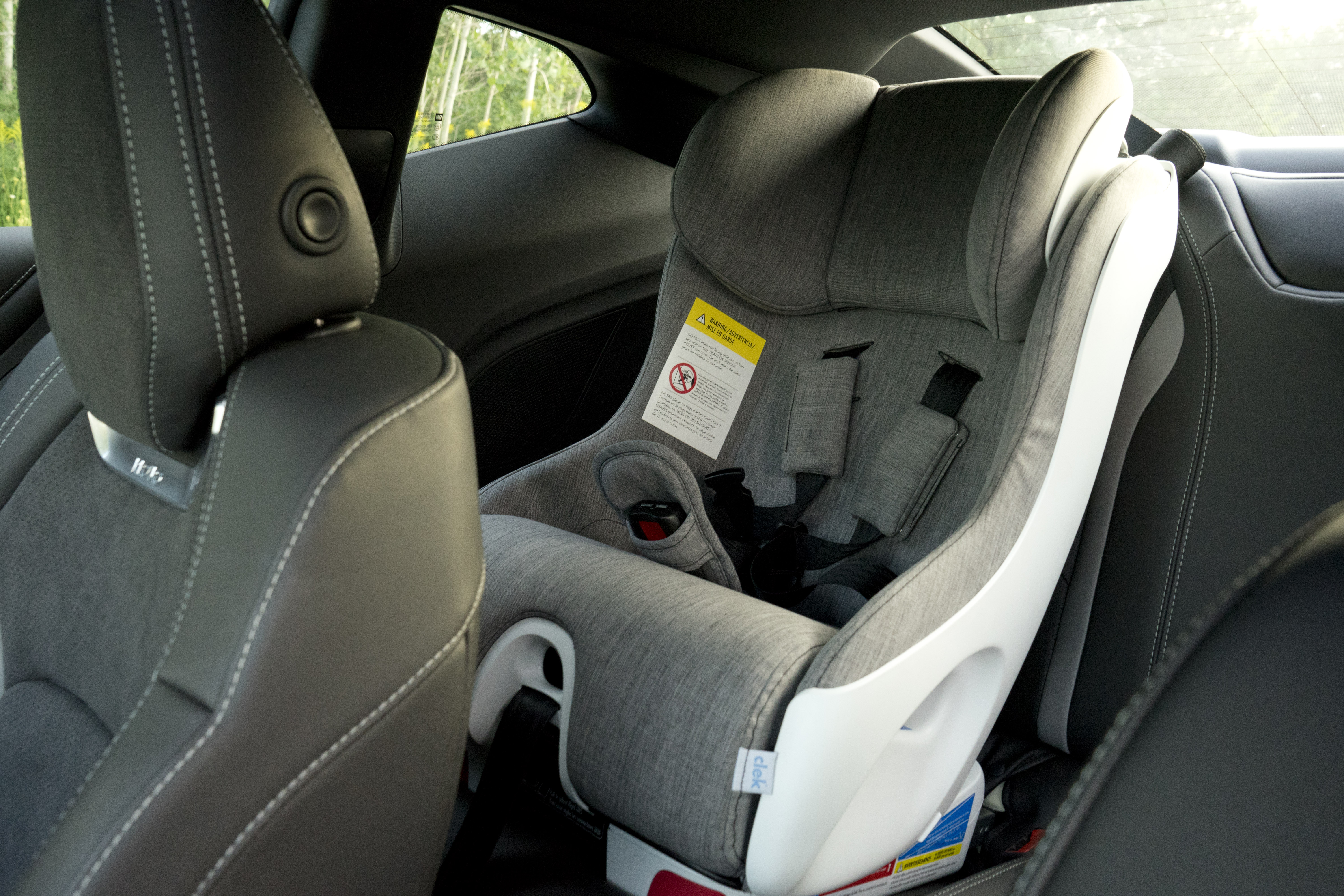 The 6.2L LT1 V8 is a legend among engines, pumping out 455 naturally aspirated horses near its 6500 rpm redline and sounding bad-ass the entire time. Cylinder deactivation shuts off 4 of the pots under light loads and makes this a fuel-efficient highway cruiser. The 8-speed auto might not be a quick shifter but those two extra gears allow the SS to loaf around at highway speeds with the tach registering a few ticks above a sleepy 1000-rpm.

I liked the design of the cabin, most of the materials felt pretty good, save for some hard scratchy plastic along the transmission tunnel. The issue is that it feels a little claustrophobic. The tiny greenhouse is chock full of blind spots and makes things like reversing and parallel parking more difficult than it needs to be. There are optional blind spot monitors, rear parking assist, and rear cross traffic alert that help but it means springing for the 2SS trim which is an extra $5000 over the standard SS and it comes with a bunch of stuff you might not want. 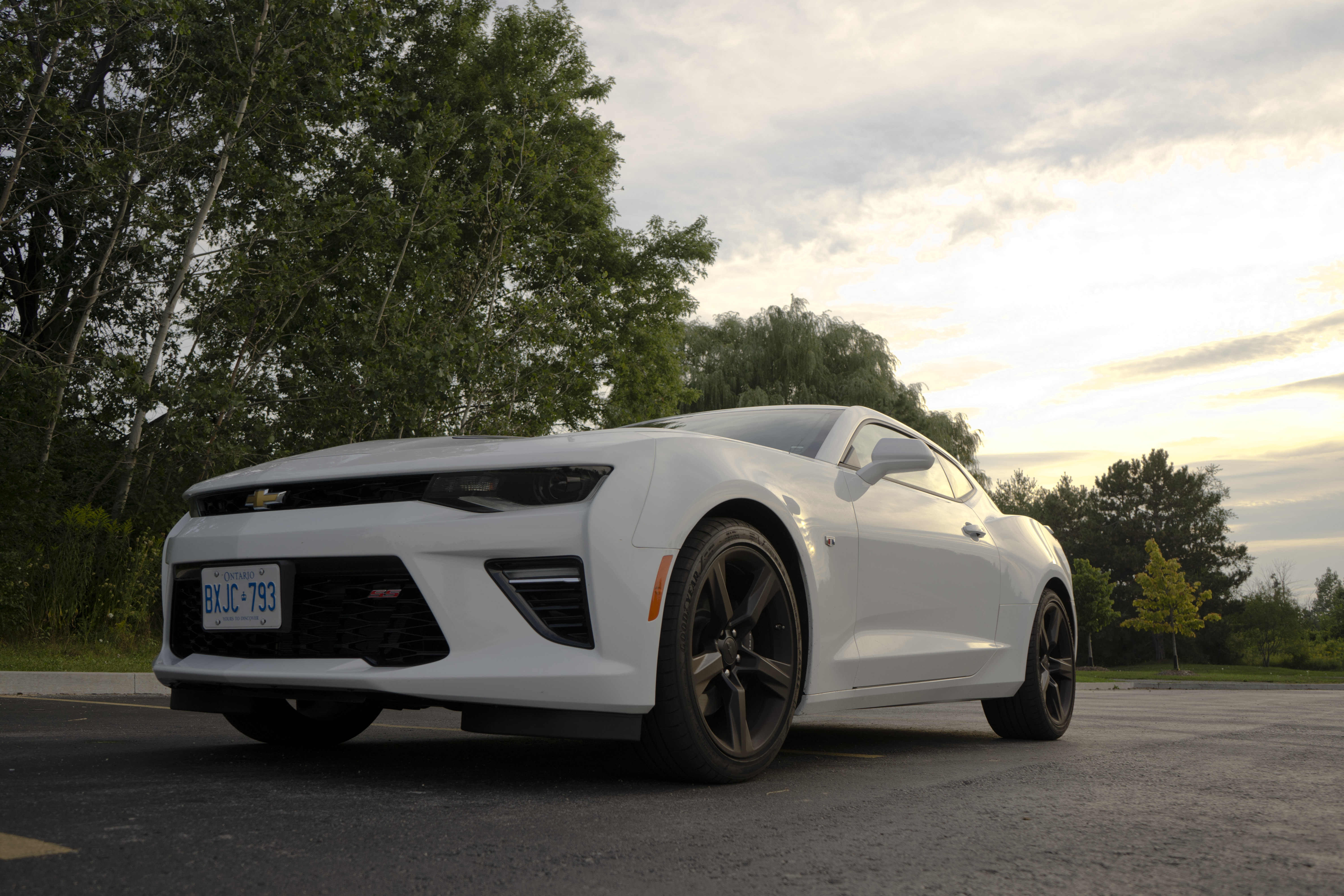 My ideal build would be a 1SS with the 1LE package for just over $50,000. A bargain if you consider the level of performance you get for that money. On a track it’s faster than a BMW M4, a car that’s nearly 40 grand more expensive, and will also crush its immediate competition.

In the real world it’s surprisingly livable but things like the visibility issue and lack of storage have to be taken into consideration, areas where the Mustang fares better.

It might not be the sales leader but the Camaro SS has morphed into a purist’s driving machine that punches well above its weight class and offers one of the best sports car experiences on the market.