“What is that thing anyway” more than one person asked me?

“Looks sort of like a Charger,” one wag ventured. “Only bigger.”

With customizations and cues taken from both the Dodge Charger and FCA’s Street and Racing Technology (SRT) division, the 2018 Dodge Durango SRT pushes performance to the forefront, putting new stress on the “sport” in sport utility.

Company execs have taken to describing this latest Durango as a “trailer-hauling, three-row muscle car”. 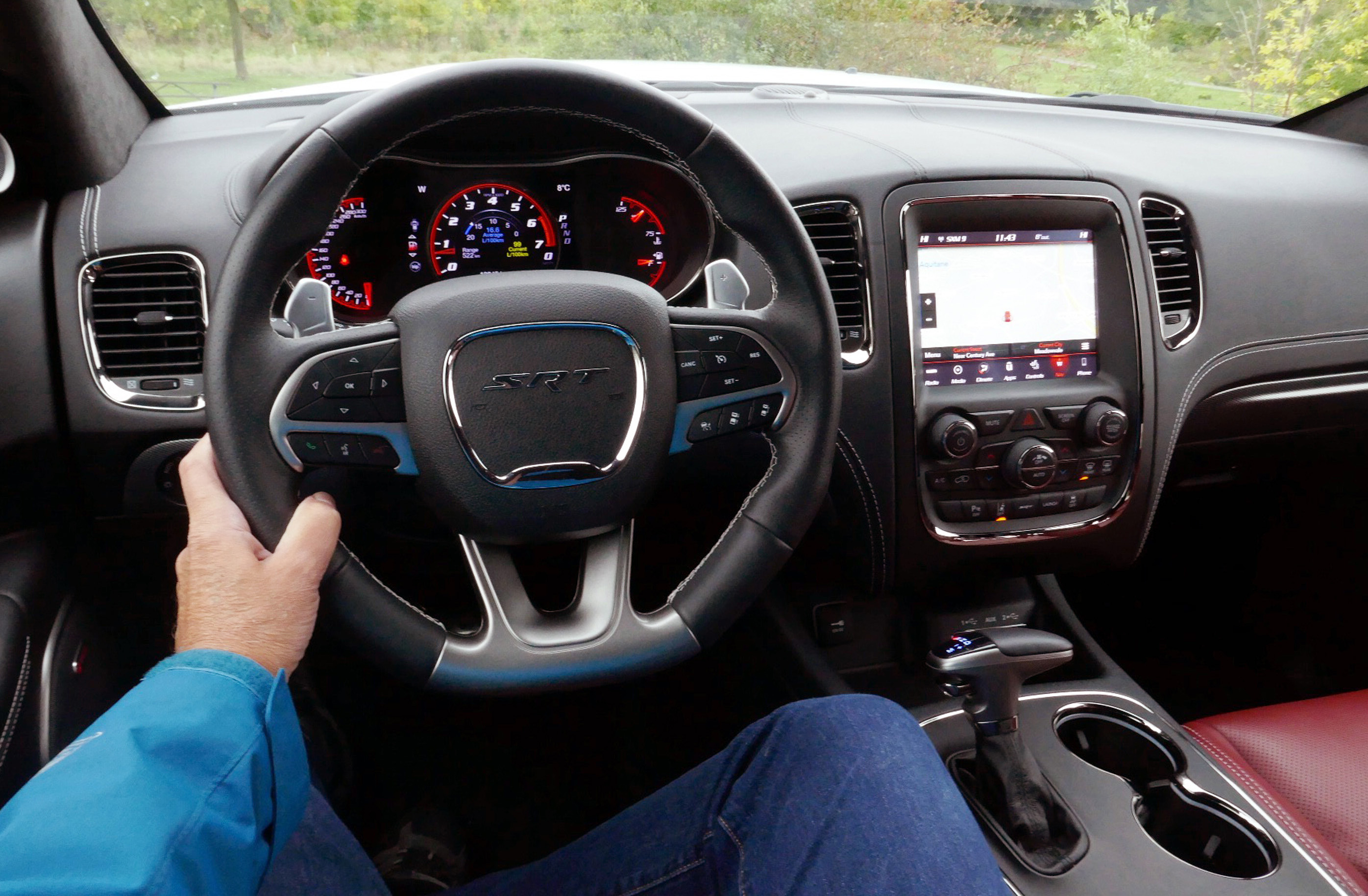 This isn’t the first time Fiat Chrysler has put its SRT team on a product that is primarily designed as a premium people mover.

But the Durango is significantly bigger – taller, wider and almost a foot longer, allowing for the third row that the Grand Cherokee does not offer.

And while it may not sound easy to play the part of the villain while dressed in white, my Durango SRT tester was pulling it off handily, posing with just enough blacked-out effects to accent its aggressive attitude with the black hood slashes of an air scoop bracketed by heat extractors, a dark mesh upright grille and black surround headlamps up front, the muscular bulges and cocky stance atop big black wheels.

The only colour interruptions of this monochrome message were the red splashes of taillights, Brembo brakes and “392” side badging.

Those badges reveal the real story hunkering under the hood – Dodge’s legendary 392 cu in V8 stuffed into the engine bay to the tune of 475 hp and 470 lb/ft of torque. 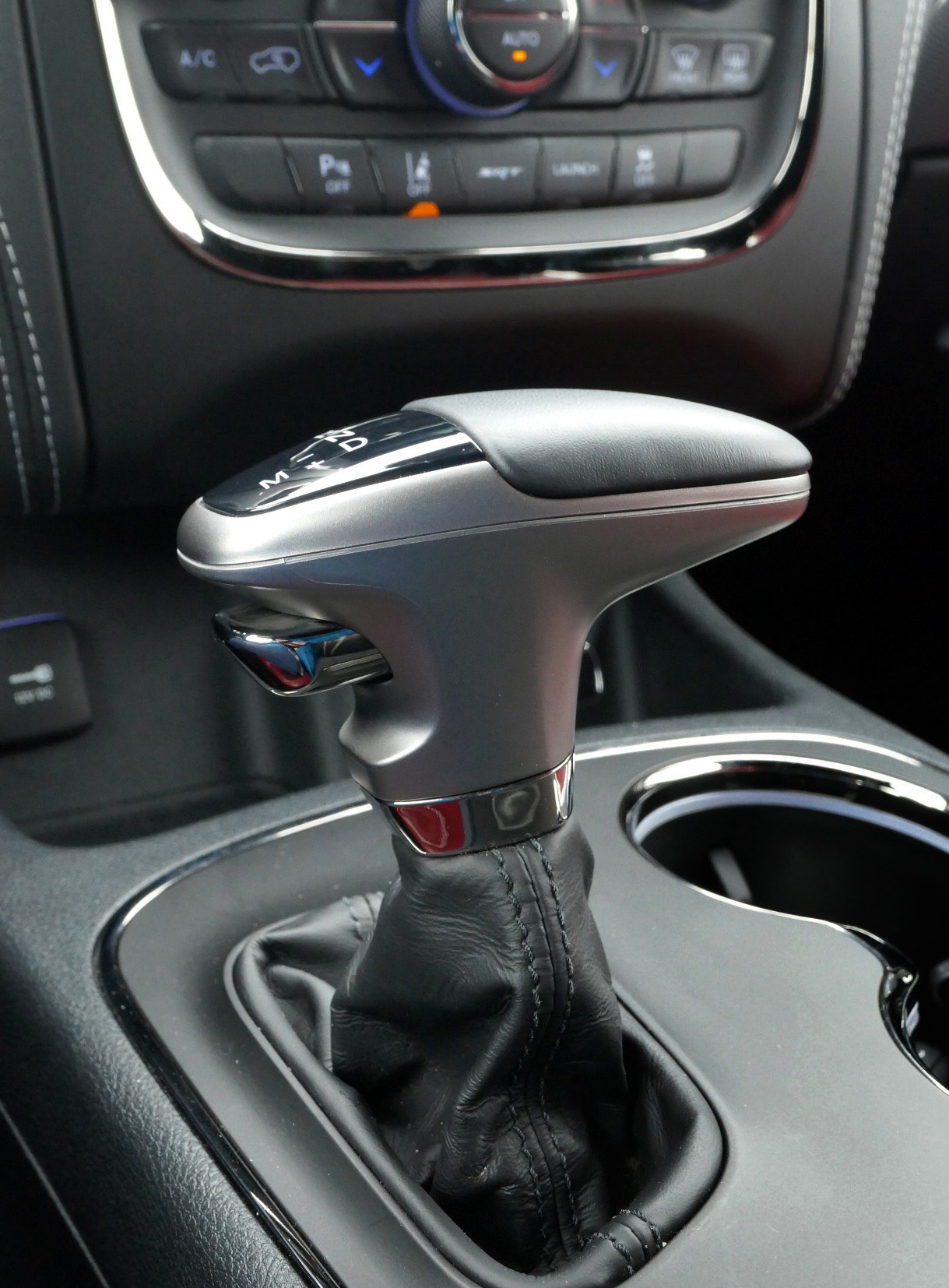 The 6.4-litre HEMI starts with a snarl, settles into a grumpy burble and erupts with a roar when prodded, blistering to a National Hot Rod Association (NHRA)-certified quarter mile time of 12.9 seconds and accelerating from 0-100 km/h in 4.5 seconds.

Along with hauling butt, the Durango SRT will also haul pretty well anything else you want, boasting a best-in-class towing capability of 3,946 kg (8,700 lb).

The big V8 comes with FuelSaver Technology designed to deactivate cylinders during light load cruising conditions. On long highway runs you will often see a “4-cyl” notification come up on the gauge cluster, letting you know that the V8 is doing its best to adjust for fuel economy.

But, despite occasional outbursts of pedal-flooring hooliganism, my real world results, especially after a long, sedate highway trip, actually beat the official rating with a very respectable 11.8L/100km (comb) average.

A new T-shaped shifter, looking like something out of “Aliens”, controls a TorqueFlite eight-speed automatic transmission that streams the HEMI V8 power to the all-wheel-drive system. 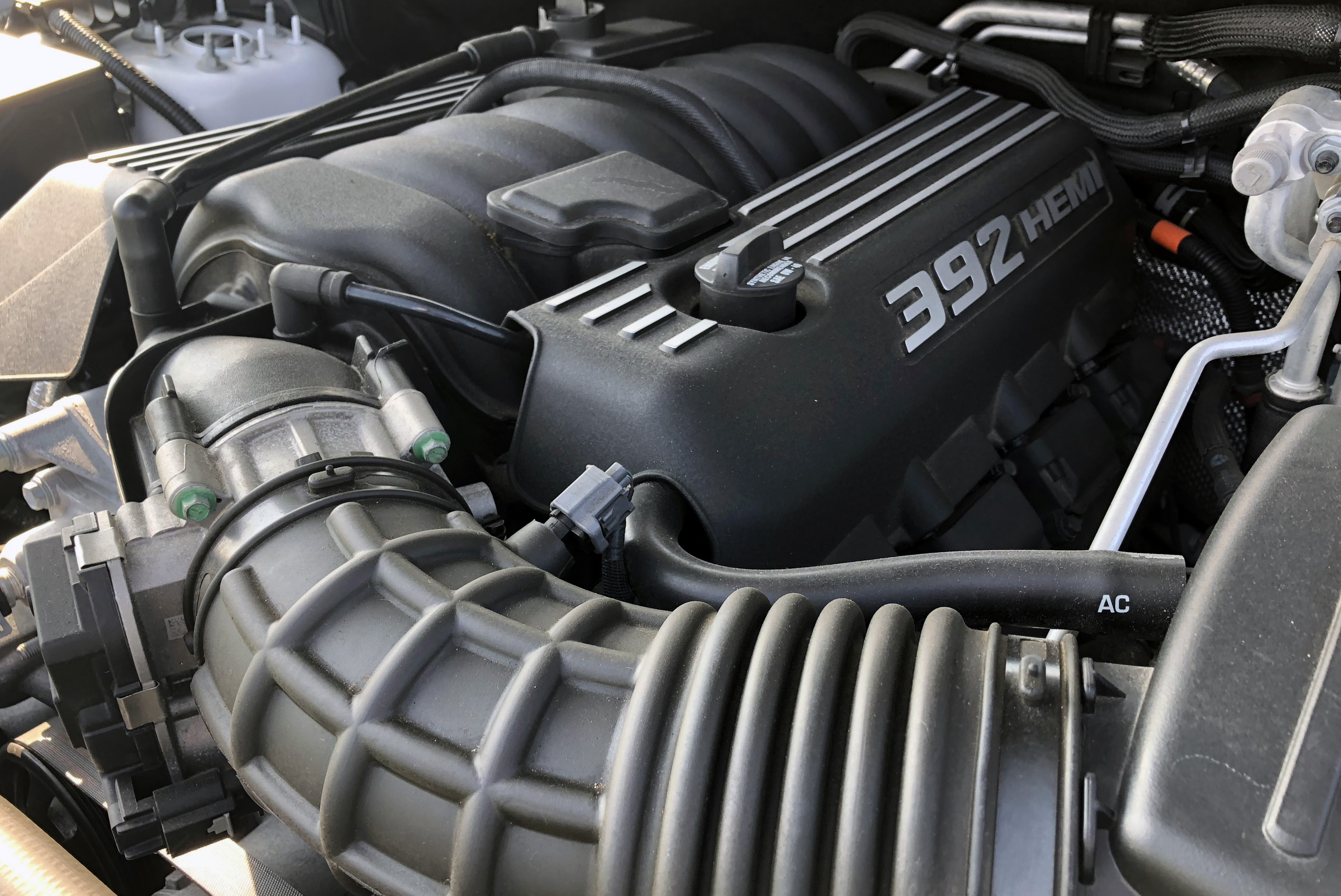 The list of dynamic assists and performance add-ons seems almost infinite but even non-enthusiasts might be persuaded by the balancing components of premium luxury in this top-of-the-line trim level. It boasts double stitched leather upholstery, the headliner and pillars wrapped in Dynamica suede, carbon-fibre trim touches and, in this case, Demonic Laguna Red heated, ventilated seats that add the aromatic ambiance of fresh baseball glove while providing sumptuous seating and reflecting the exterior red accents outside.

SRT embossing on the seats is also repeated by logos on the matts, door sills, steering wheel and gauge greeting.

And, in the unlikely event that drivers get bored listening to the HEMI V8 soundtrack, the engine rumble can be drowned out by a 506-watt Beats audio system. 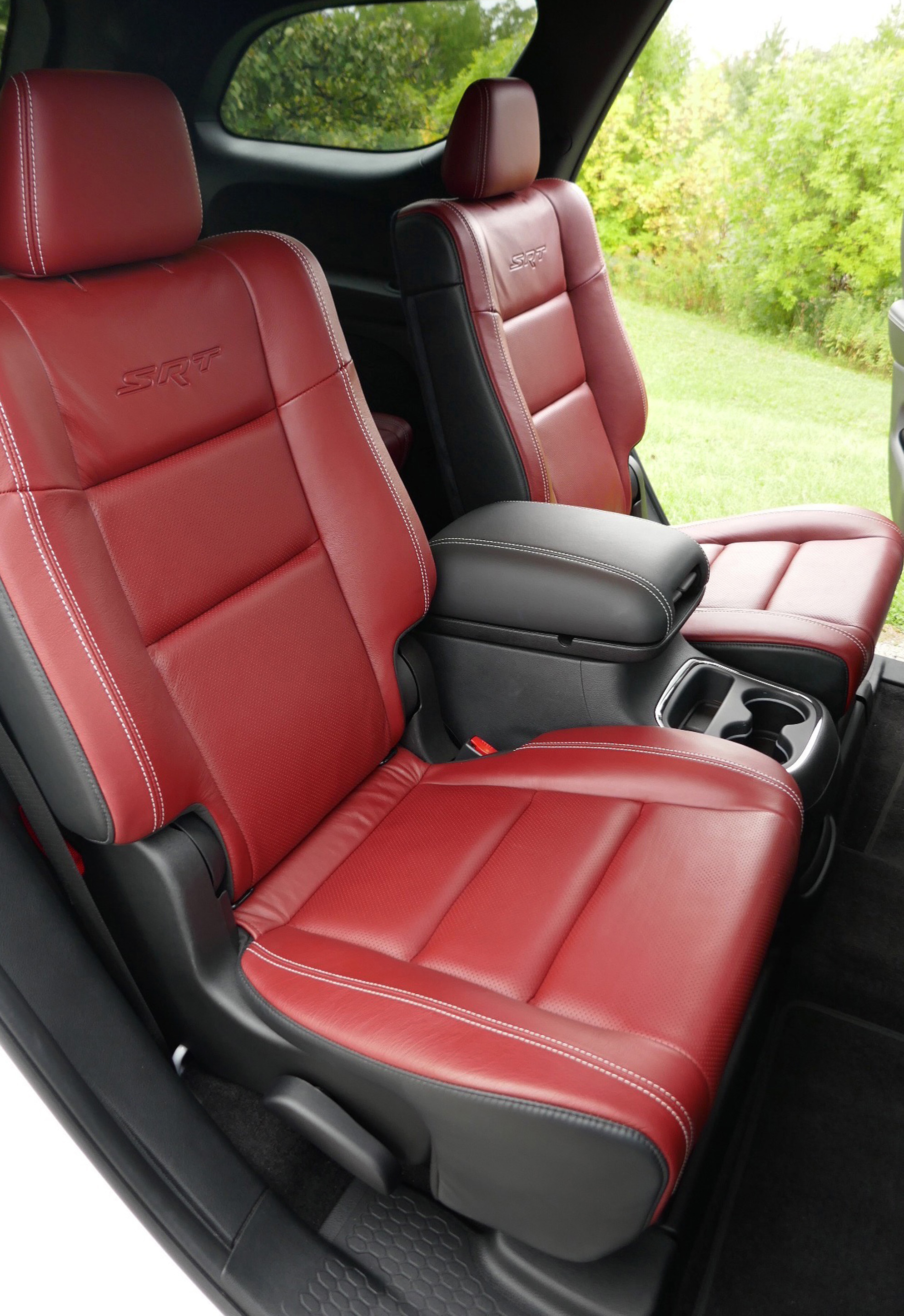 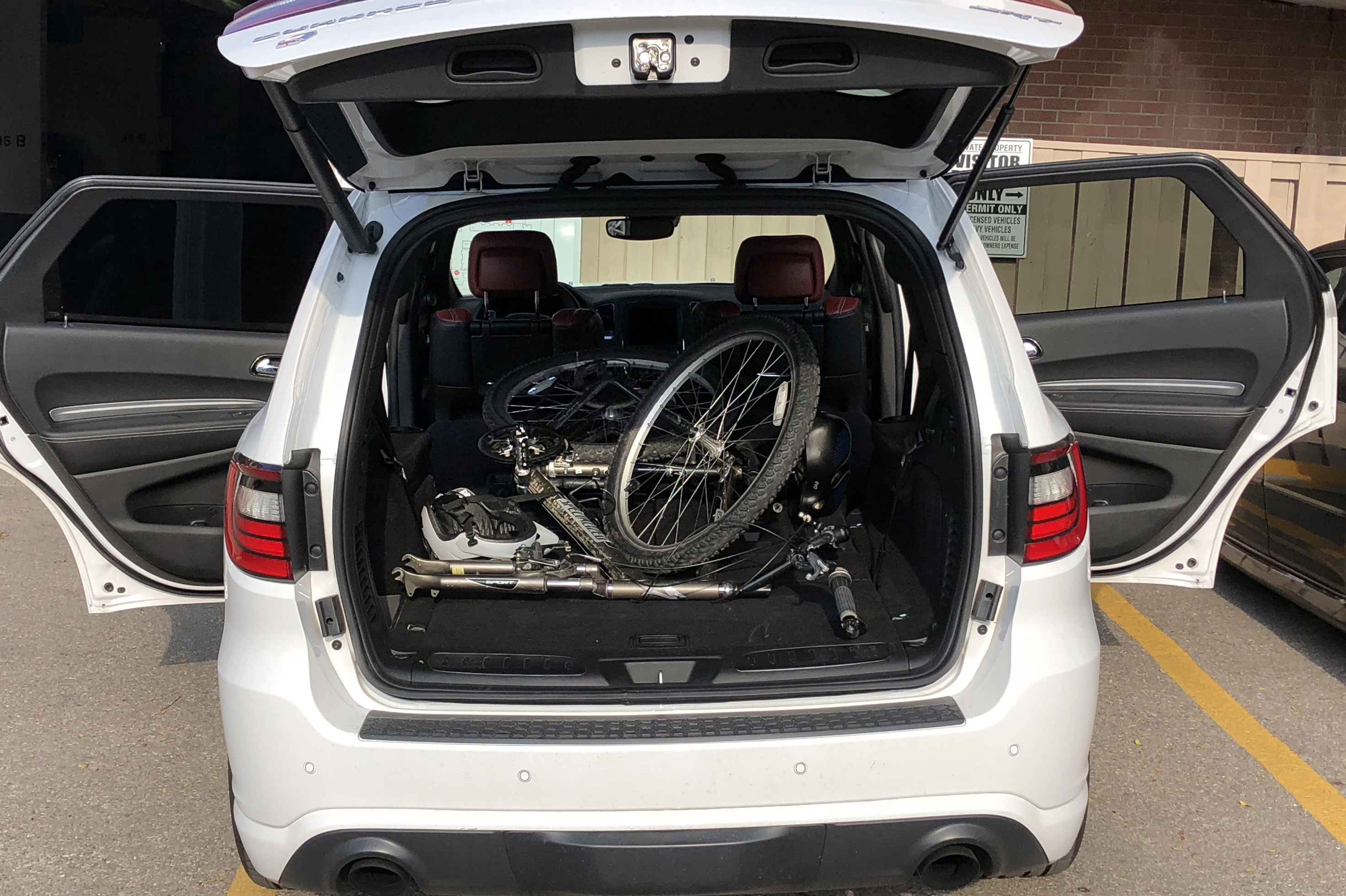 This combination of performance and panache may not offer the one-upmanship brand prestige of $100K-plus performance luxury competitors from Mercedes, BMW, Lexus and Land Rover, but it definitely offers comparative value in its class, even at its $70K-plus price range.

And in the end, it still also offers SUV practicality with six passenger potential or enough seat-flopping cargo room to let me stuff a bike in the back for my ride home when it came time to reluctantly return this tester.

Umm, unless they ever decide to follow the inspired lunacy of the Jeep Grand Cherokee Trackhawk and stuff that supercharged 707 hp Hellcat HEMI under the hood . . . 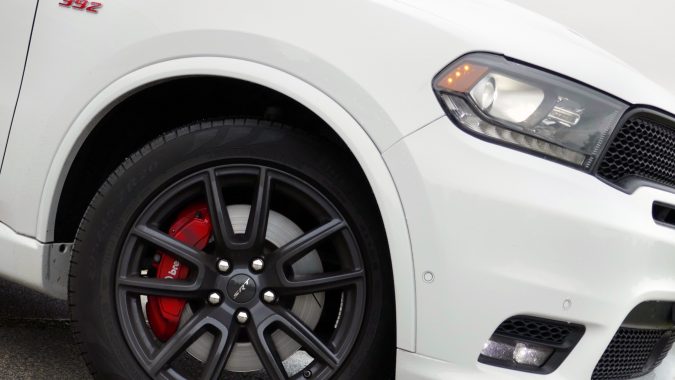 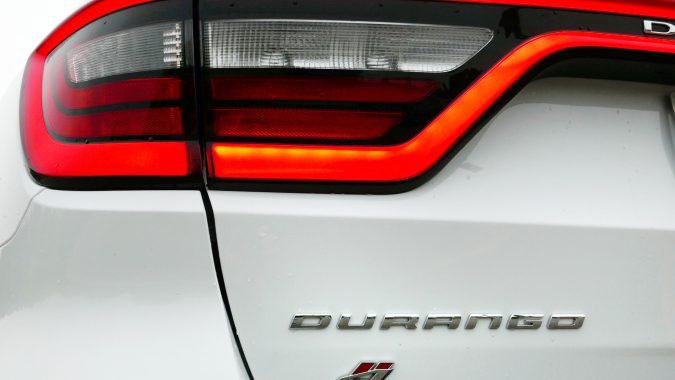 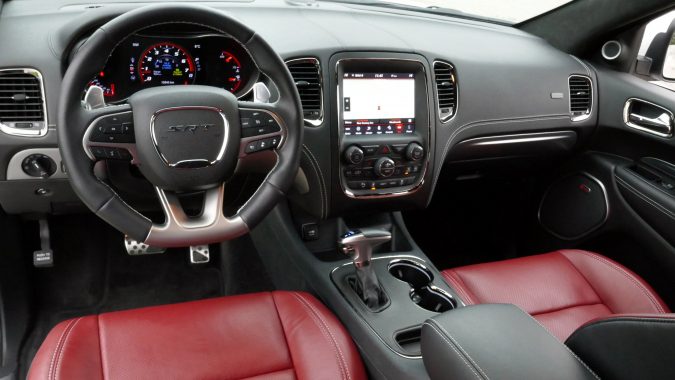 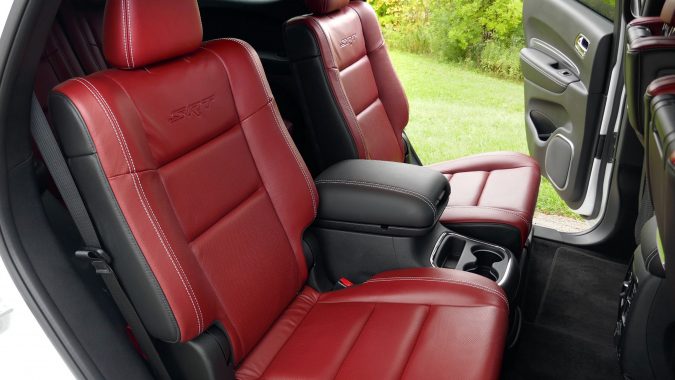 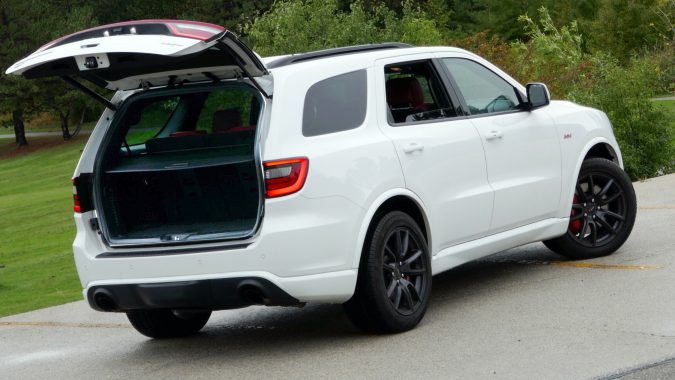 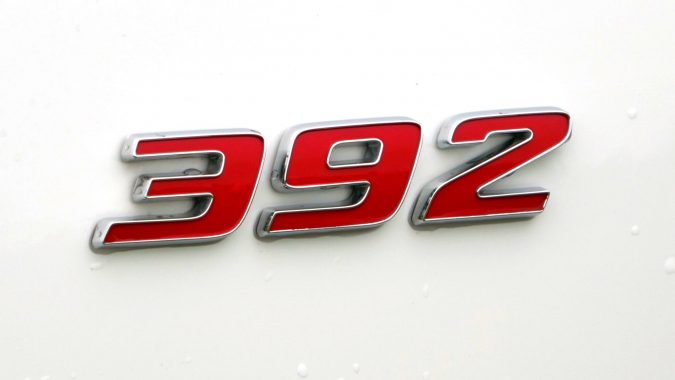