Bob Hall and Mark Jordan first sketched the outline of what became the Mazda Miata on a cocktail napkin in a bar in Irvine California. Hall later told me that their concept was essentially “an MGB that didn’t leak oil in your driveway.”

He might have been a tad more accurate if he had said “Fiat 124 Spider” instead of “MGB.”

Primary among the great things about the original Pininfarina-designed 124 Spider (1966-85, in various guises) which put it way ahead of the MGB was a convertible top that was a snap (literally) to raise and lower, as opposed to the Meccano-set-from-hell half-hour task required for the B.

The new Fiat 124 Spider can therefore claim some admittedly tenuous kinship to its namesake.

It was introduced last year, and is based on the fourth-generation Mazda MX-5 Miata, which immediately earned it the nickname “Fiata.”

My tester was the range-topping “Abarth.” For the kiddies in the audience, Carlo Abarth was an Austrian/Italian tuner who specialized in making Fiats go indecently fast.

Just about every option box on the order form for my test car had been checked; the final sticker came to lofty $48,880, plus another $100 for air conditioning tax and a $1,895 destination charge.

Among the options were handsome black leather seats ($1,295); a “convenience group” ($1,500) including security alarm, backup warning system and the blind spot monitoring system which as always is pointless in itself, although it also brings the rear cross traffic alert system which can be helpful; “visibility group” ($1,500) which includes the useful auto-levelling LED headlights with washers; and a “navigation and sound’’ group ($1,600) with SatNav, a BOSE 9-speaker sound system with speakers in the head rests, and Sirius satellite radio with a one-year subscription.

Among the best things on the option list are the powerful, not to mention bright red, Brembo disc brakes ($1,195).

Perhaps among the worst option might be the matte black paint on the hood and trunk lid. This recalls the 124 Abarth Rally model of the mid-1970s and looks really cool. Except you have to fork over three grand for it, then watch some birds poop on it, at which point it’s pretty much done.

Looking at photos of the original 124 Spider and its reincarnation — car-nation, geddit?? — you instantly can see that the resemblance is uncanny.

And, it shows how brilliant the original design was. The car still looks modern, and very pretty.

Structurally, the new 124 Spider is an MX-5 underneath, and is assembled by Mazda in Japan.

I will focus here on the differences between the two cars.

Prime among those would be the engine, a 1.4-litre, four-cylinder “Tigershark” turbocharged four which comes from Fiat/Chrysler’s factory in Dundee Michigan. It already has earned a lot of frequent flyer miles by the time you pick up your car. 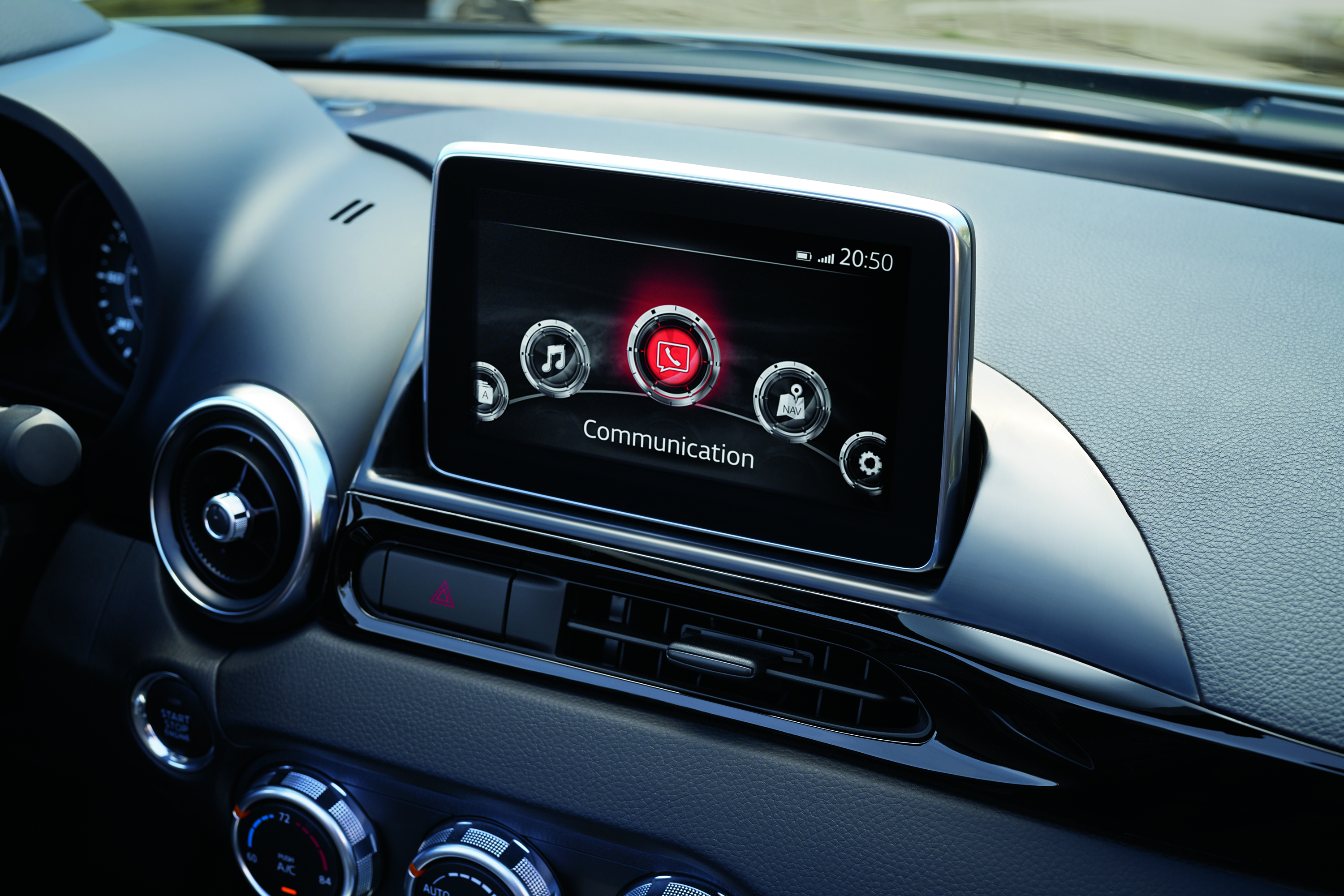 My tester had the six-speed manual transmission, which actually is from the previous generation NC Miata. The proffered reason is the Tigershark’s higher torque, although the ND MX-5 has more torque than the NC did, and its new tranny can handle that. Seems a bit odd.

A six-speed autobox is also available.

As hinted at above, the interior is pretty much the same as the MX-5, and that’s mostly good.

But first, you must make sure you fit — it is a small car.

The seats have adjustable thigh support which is always welcome in our household with two very different-sized people driving the cars. I found them very comfortable, and the adjustable front part of the seat cushion will make different-sized drivers more at home.

Interesting that the latest MX-5, officially a 2019 model, gets a tilt and telescope steering wheel for the first time in the car’s history, while my 124 only had tilt like the older MX-5s. Makes you think that maybe this will be added when the 2019 Fiat comes out.

Some nice details such a red stitching in the seats and trim panels add a classy touch. Still no glove box, just a small cubby under the driver’s right elbow. No door map pockets either.

On the plus side, the trunk is larger than MX-5’s by at least one soft-sided piece of luggage.

A car like this is for driving, so let’s go.

Oddly, the extra torque doesn’t make the Fiat quicker than the MX-5, either by the stopwatch (a 0 to 100 km/h of about seven seconds will be maybe half a second slower than the MX-5) or by the seat of your pants. 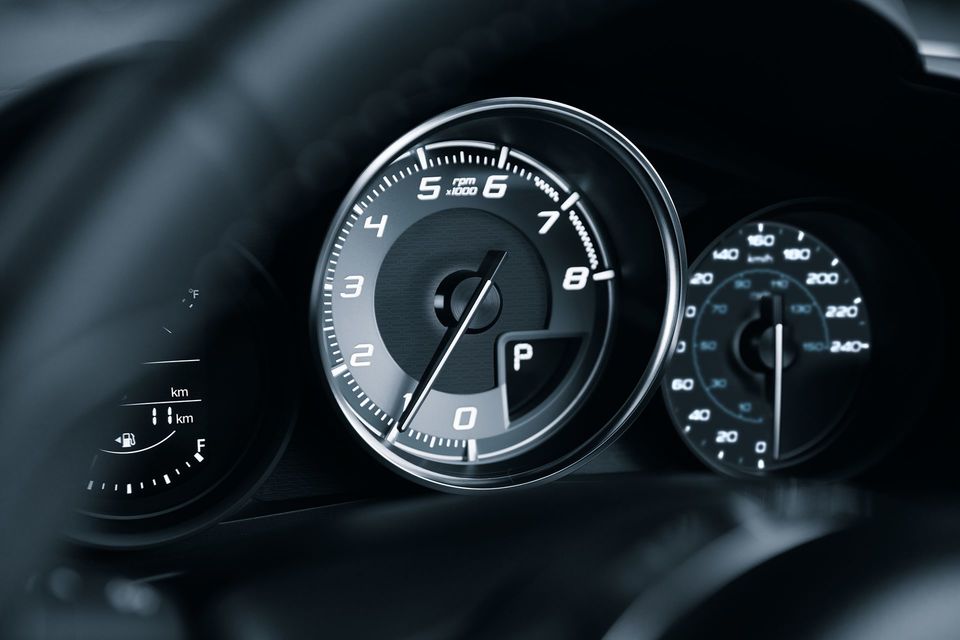 That’s due to the time it takes for the turbo to spool. Once you get to that torque peak at 2,500 r.p.m. it’s a reasonably satisfying run to the red line. Upshift, and carry on.

And like the MX-5, probably nobody around you knows how hard you’re driving. Good afternoon, Officer!

The Sport mode sharpens the throttle response, making the car feel a bit more lively. It resets to normal mode when you shut the engine off.

Nobody ever complained about a Miata’s gearbox, and even if the Fiat’s is one generation old, it still feels fine to me. Shifts are positive and smooth. Clutch take-up is perfect. If you’ve never driven a stick and want to learn, borrow one of these. Or an MX-5.

It would be difficult to screw up an MX-5’s handling, and Fiat has not. If you drove the two back-to-back you might notice the MX-5 responds slightly more sharply in corners, but again, there’s not much in it.

I didn’t drive a non-Abarth version, so it’s impossible to say what difference the firmer suspension would make.

You would expect less body roll — the MX-5 leans a bit in corners, although it never seems to impede your progress through the twisties — and the Abarth edition’s ride is a bit on the firm side.

The Fiat does have more sound deadening, and it seems quieter inside with that lovely retractable soft top in place. Like the MX-5, there are speakers in the headrests, which also connect to the cellphone. I could hear my callers fine, although they had some difficulty hearing me.

So, what has Fiat Chrysler wrought with this car?

For sure, it won’t put the MX-5 on the proverbial trailer.

But it gives fans of open cars — no retractable hardtop model like the MX-5 offers — another alternative in the very small field of quasi-affordable ragtops.

It is perhaps less a pure drivers car than the MX-5, but that may appeal to some who just want the en plein aire feeling without quite the same level of intensity.

And, it is downright fabulous to look at.

That is never a bad thing. 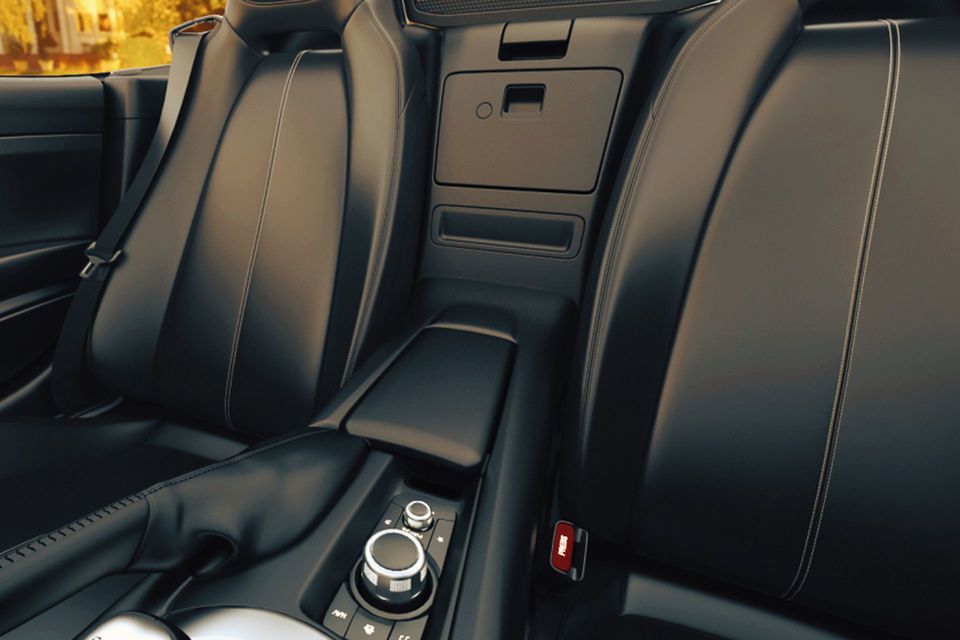