Drive sensibly and Accord Hybrid rewards you

But this was in a mid-size Honda Accord Hybrid, not a plug-in or engine-assisted electric car.

My distance was theoretically enough to make it from Toronto to Detroit (371.6 km) without anxiety.

The mileage recorded was done without resorting to the absurd – such as folding back the outside mirrors or tailgating a transport truck to take advantage of the slipstream.

It was done driving normally and taking advantage of the capabilities of the engine/motor/battery to stay on top of the energy flow. 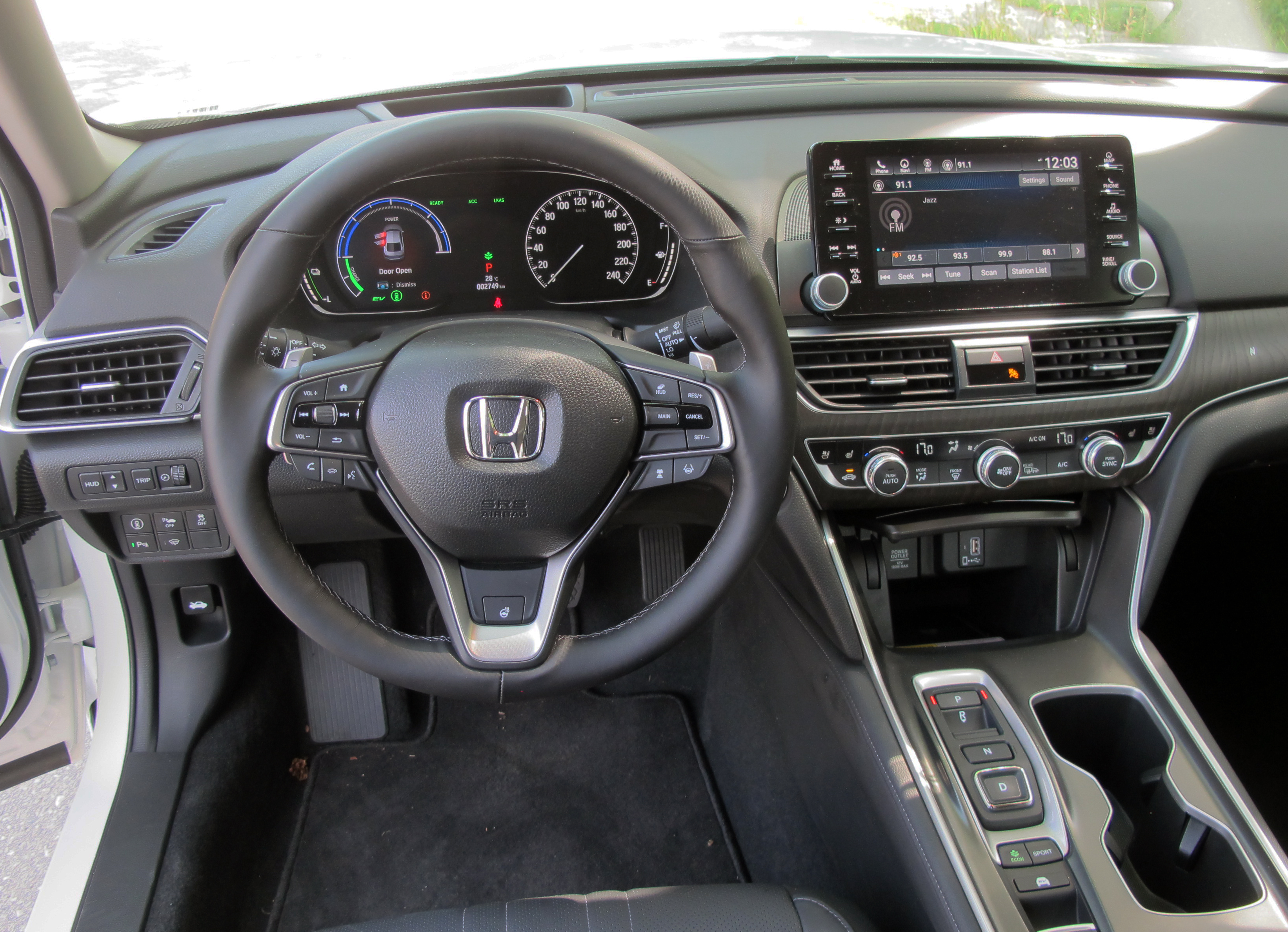 Here’s what I mean by that.

The Accord tested here is considered a “mild” hybrid in that its gasoline engine is the primary means of propulsion with an electric motor.

In this case, the engine is 2.0-litre direct injection non-turbo inline four-cylinder producing 143 hp and 129 lb/ft of torque. It works in concert with a 181 hp, 232 lb/ft of torque electric motor for a combined 212 hp. Honda does not publish combined torque ratings.

Under the floor is a 17 kWh lithium-ion battery that gets its power from a variety of sources, such as regenerative energy from coasting and braking. But the primary source is the engine.

Besides the discreet badging, aero drag reducing wheels and no visible exhaust pipe, there’s not much to distinguish the Hybrid from an ordinary Accord sedan – and that’s the point.

Too many electrified cars have a jellybean “I’m saving the planet” look to them, which can turn people off. 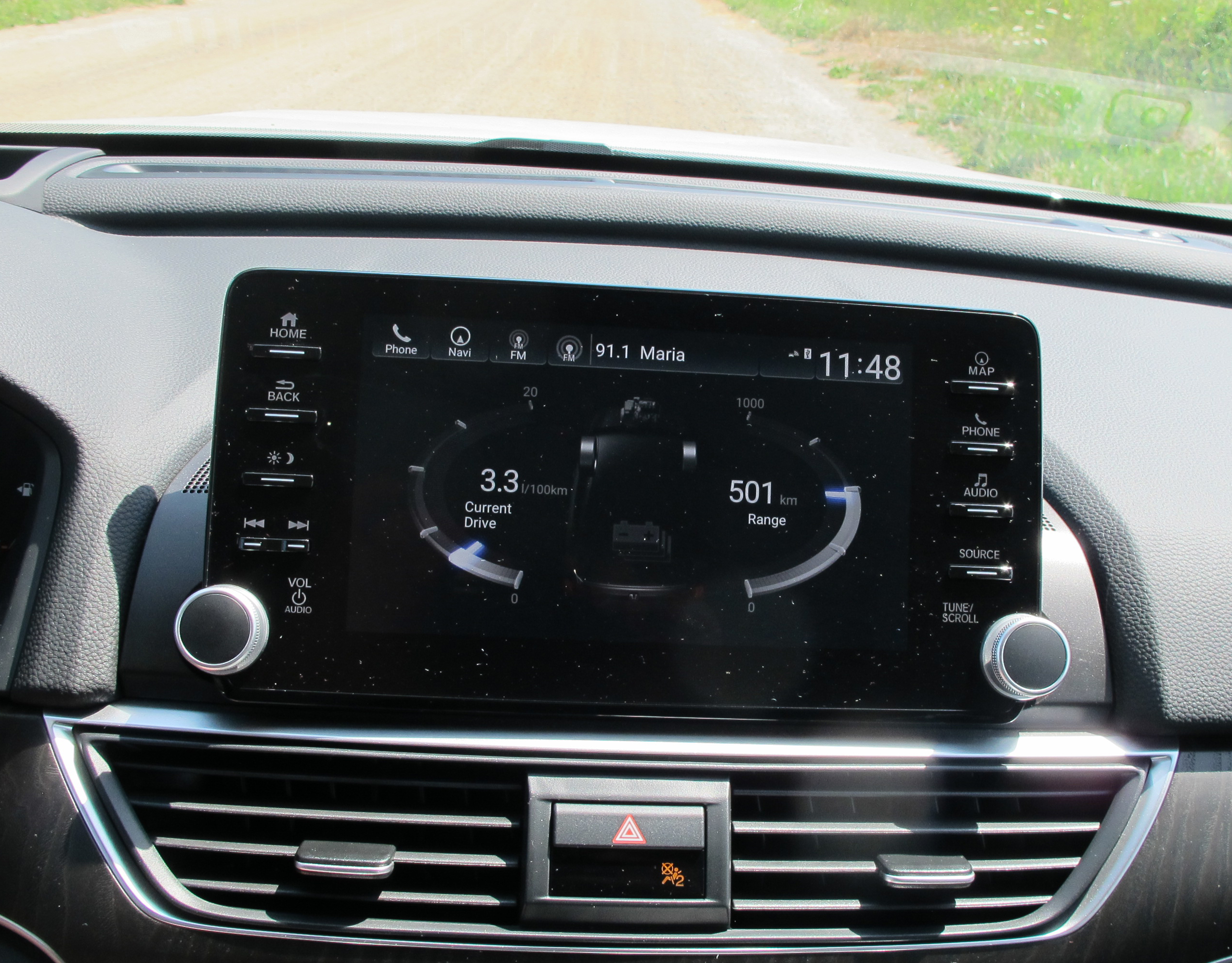 The Accord Hybrid has three driving modes.

With the power flow indictor running on the centre stack touchscreen you have EV Mode where the Accord relies solely on the electric motor and battery pack for propulsion.

As the battery pack is depleted, the Accord switches to Hybrid Drive, where the engine feeds the generator which, in turn, provides propulsion to the motor to drive the front wheels.

Approaching highway speeds, a clutch kicks in through a mechanical link so the engine drives the front wheels.

But by judiciously using a light, right foot, the engine and regenerative power can get the battery/motor combo trading energy back and forth.

Being able to watch this happen is the key, as you soon know when to lift/coast/brake for the best results based on speed and the flow of traffic around you.

Camry Hybrid shows Change can be a Good Thing

On my usual two-hour route over lots of rolling hills, I could coast and then brake and watch the energy meter in the main instrument cluster fill itself back up.

Then with momentum still in play, feathering the accelerator was just enough to make the next climb with energy still in the battery.

Amidst bumper-to-bumper rush-hour traffic out of Toronto, the extra boost of torque from the battery made a huge difference, trying to change lanes in a land where others do their best to thwart you.

Getting good mileage is not rocket science, but something everyone can do without really trying that hard.

Making a good thing better was the fact I was driving the toptrim Touring model that was fitted inside and out like an Acura luxury sedan. 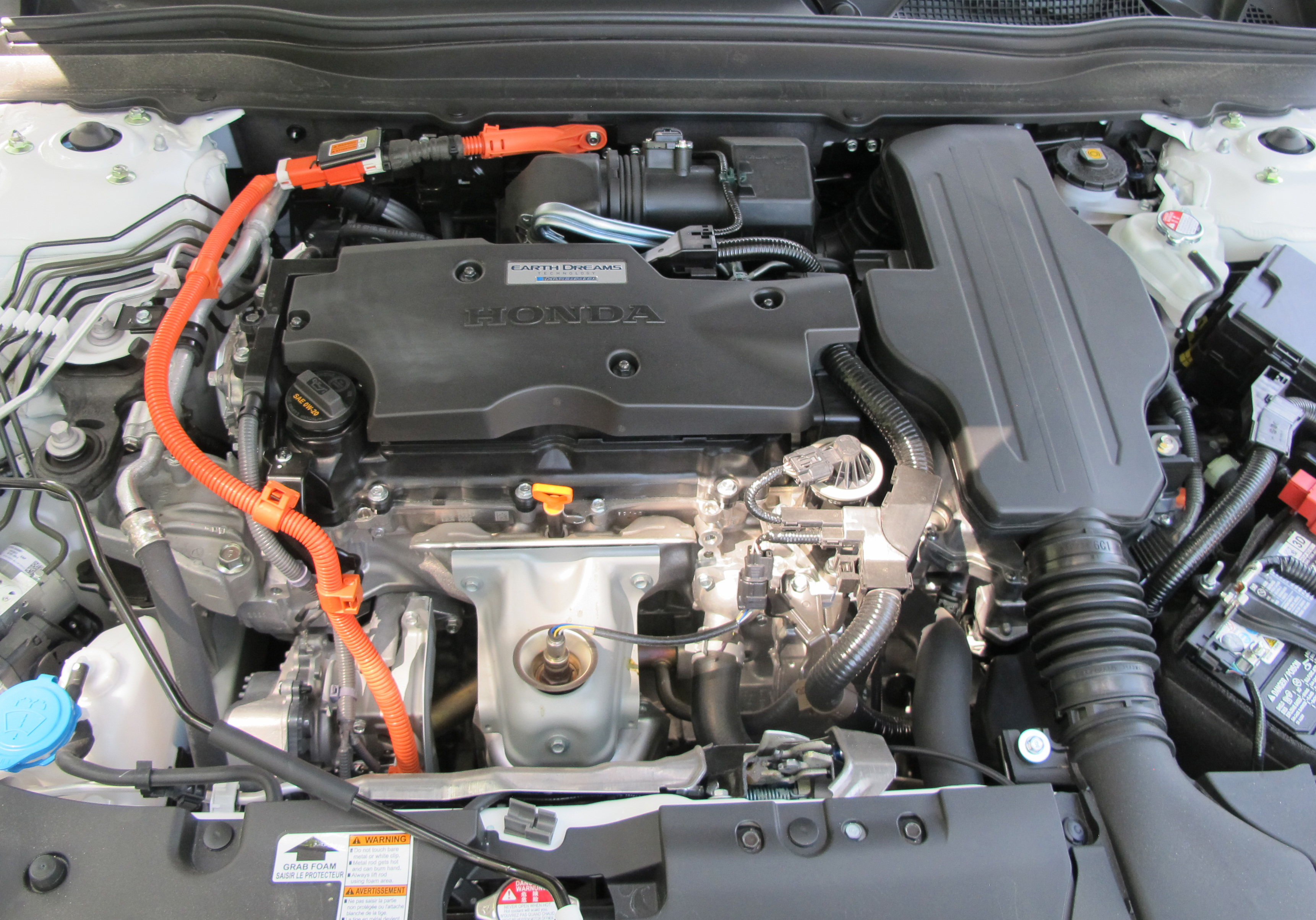 At the front there are no less than 26 LED lights – four in each lower running light and nine in each of the main headlights, which also feature on/off for the low and high beams.

From the heated and ventilated perforated leather front seats the driver’s main instrument cluster has a seven-inch centre information centre.

The best part of this is the posted speed limit not only is depicted on the info centre, but also on the Head Up Display. And on the HUD, the speed you’re going is shown in larger characters right beside it, so there’s no excuse for not knowing how fast your car is going.

But this also plays a part in harvesting regenerative power, because you can edge up the speed and then discreetly lift your foot and pick up one or two more kilometres range in the battery at a time.

The Touring model is its own rolling WiFi hotspot with a cubbie at the front of the centre console for smartphone connection and a wireless charging dock.

The 2018 Honda Accord Hybrid makes it possible to go a long way and in comfort, while making a contribution to reducing our dependence on fossil fuels. 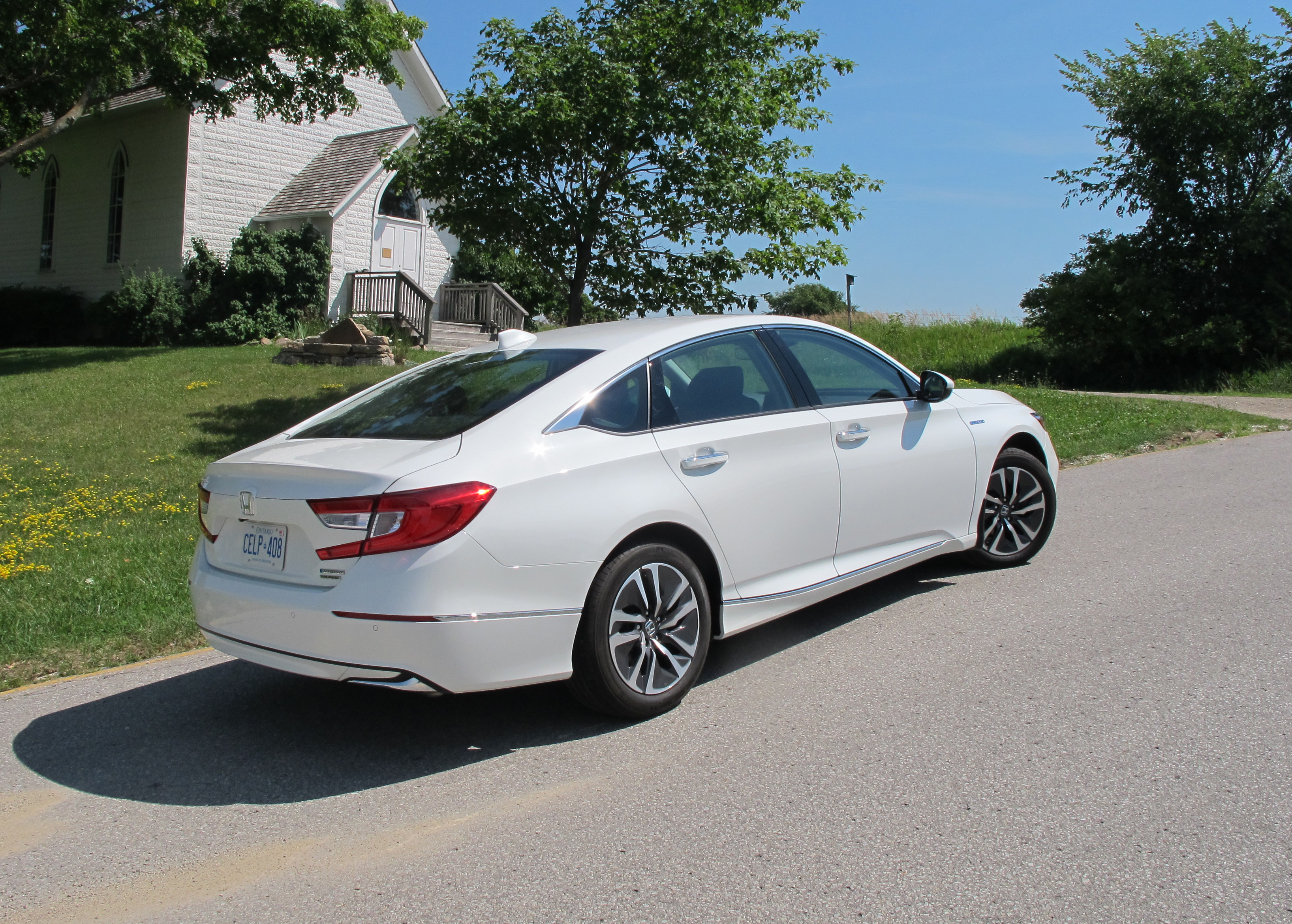 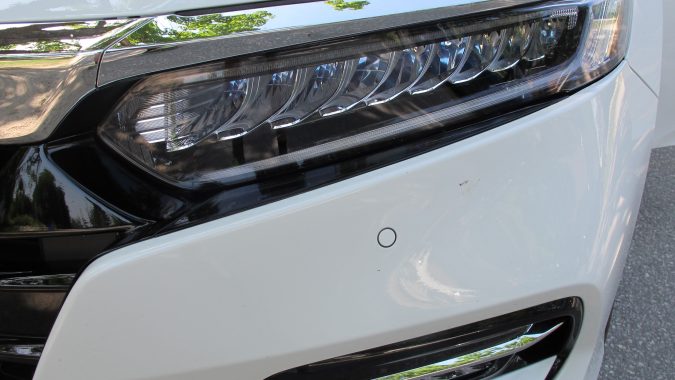 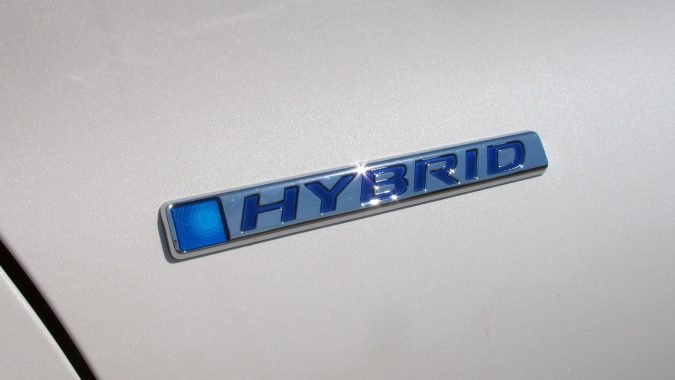 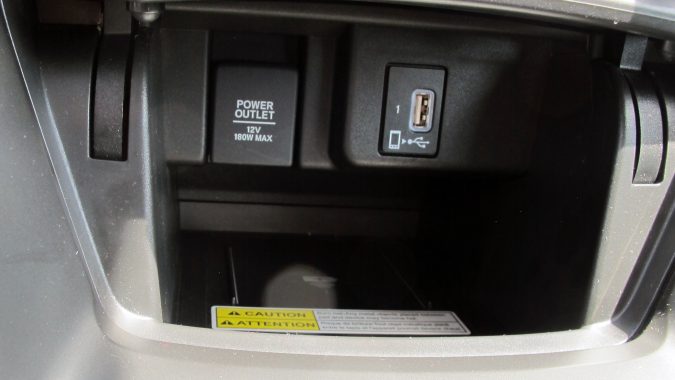 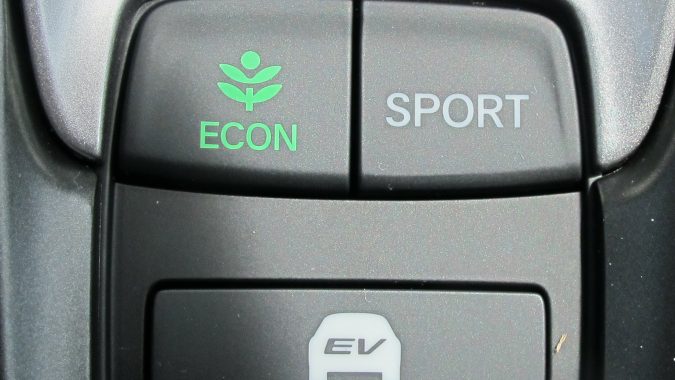