On pure visual appeal, the Jaguar F-Type is what every two-door sports coupe aspires to be.

Long hood, short deck handsomeness with a rakish profile and enough visual cues to invoke brand identity, but not in a way that feels gratuitous or dripping in too much nostalgia.

In short, the F-Type is sports car done right – it always looks great. In any colour, in any trim, with any option package, and from any angle. Coupe or convertible.

I’ve been blessed to drive a lot of sports cars in recent years and I have a hard time thinking of one that’s more attractive than the F-Type. As attractive? Maybe, but not more attractive. Nothing looks sexier than this Brit.

On the market for five years now, the F-Type has changed only by degree in the looks department – testament to not fixing what isn’t broken – but Jaguar continues to fiddle with models and packaging options, adding features and broadening the amount of content available across the range. 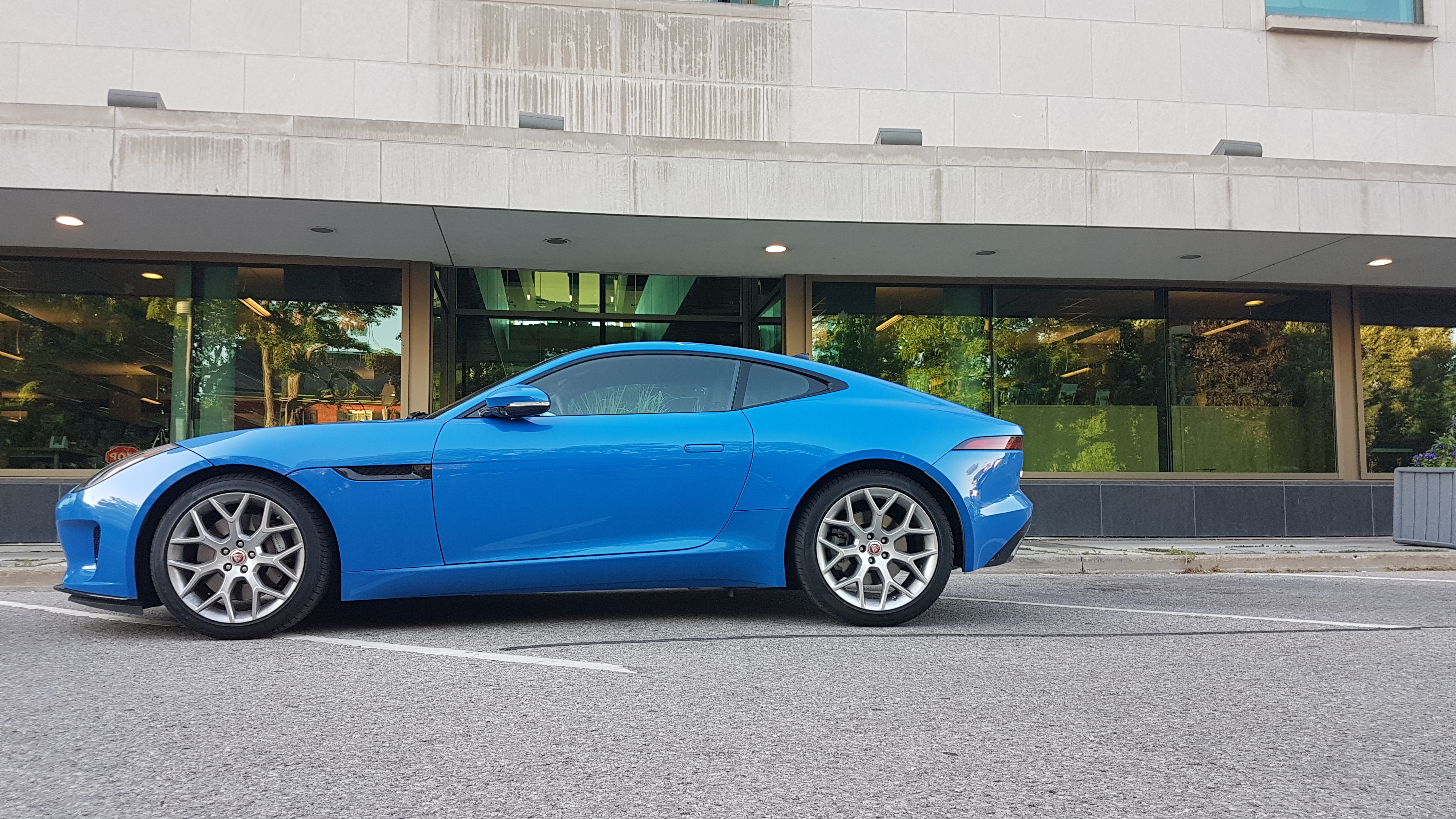 The above-the-fold news here is a new base model powered by Jaguar’s Ingenium 2.0-litre turbocharged four-cylinder engine (296 hp / 295 lb-ft.) paired with an 8-speed automatic that drives the rear wheels.

I recently spent a week, courtesy of Jaguar Land Rover Canada, driving a copy of said new model and it serves as the focus of this review.

As I say about other cars I’ve driven with this much extra stuff, make sure these items are: a) features you really want, and b) they don’t upend the car’s value proposition. For example, my tester costs $3,960 more than a model equipped with a 340-horsepower supercharged V6 (base MSRP, $78,000). The V6 can also be had with a 6-speed manual transmission not available on the base car.

With that said the base F-Type does come equipped with a lot of standard content. Some of the features included at no extra charge are an active sports exhaust, LED headlights, LED tail lights, sport seats with leather and suedecloth facings (replaced with performance seats in my tester), 10-inch touchscreen multimedia system, Meridian stereo, rear parking aid and rear-view camera. 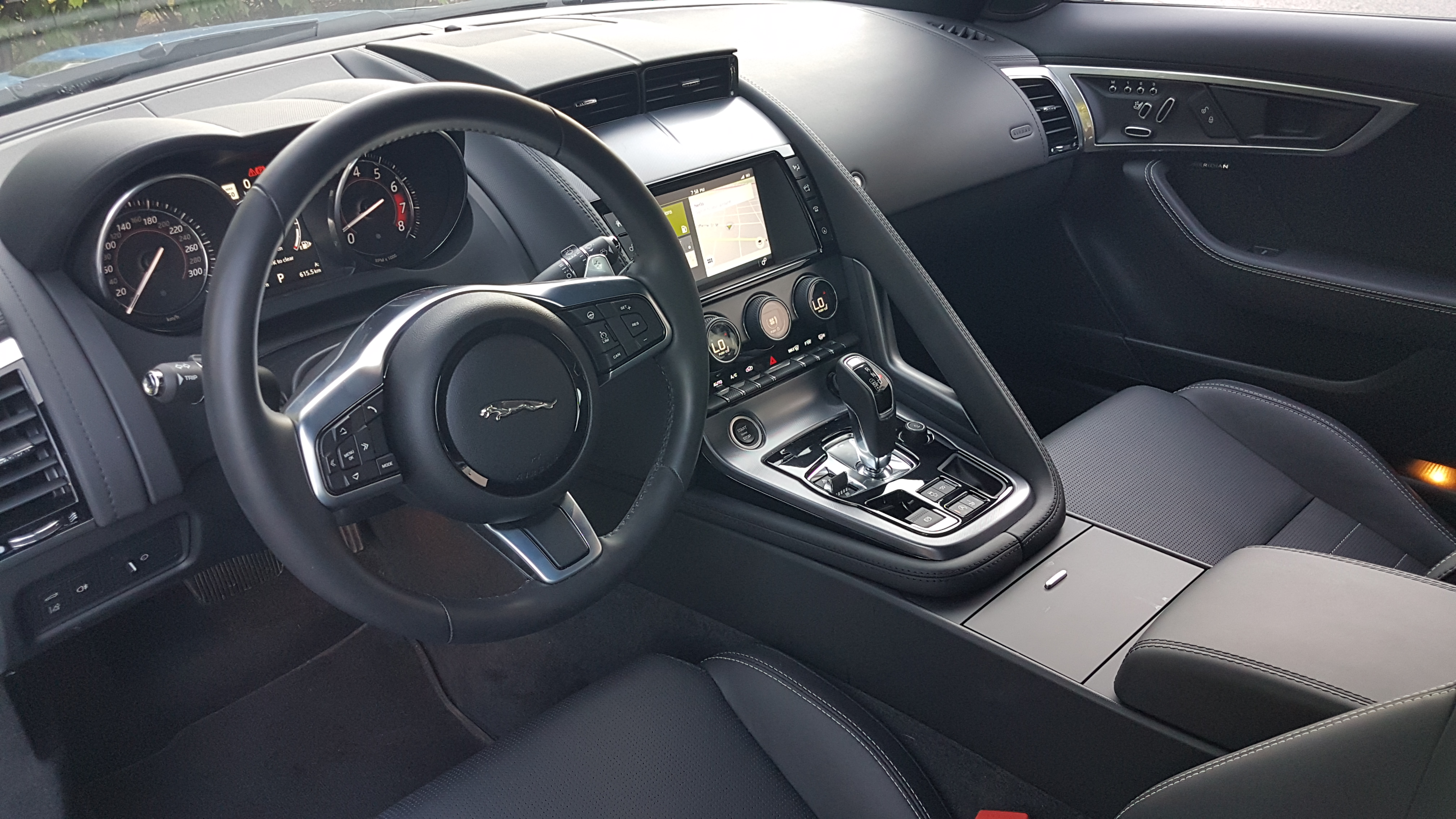 Getting into any two-seat sports car is a bit of a chore given their low-slung design, and the F-Type coupe is no exception.

But after folding myself into the F-Type’s performance driver’s seat, the environment is quite comfortable. The performance seats, finished in leather, hug my body tightly and provide enough customization to find a good driving position without too much fuss.

I always thought the layout of the F-Type’s interior to be logical, handsome and well designed, and I still feel that way, even with the updates made for the 2018 model year. Jaguar has applied some extra spit and polish for things like the switchgear and its accompanying trim pieces (new satin chrome) that also extends to the steering wheel and air vents.

The surround on the centre console and around the engine start button is now made from what Jaguar calls a ‘knurled aluminum’ finish. These bits vary depending on trim, with the R-Dynamic, R and SVR models receiving fancier pieces to set them apart from the other F-Types.

The rest – round analogue gauges in the instrument cluster, the textured climate control knobs and motorized centre vent – look and feel so familiar they’re hardly worth changing at this point. They’re as much a part of the F-Type identity as anything else, and they work just fine besides.

One other item worth mentioning is the Jaguar InControl Touch Pro software that powers the 10-inch touchscreen display. It is much better than the software Jaguar was using in the F-Type previously in every way – it’s faster, it looks better and has much greater functionality. The old system wasn’t loved so good on Jaguar for addressing it.

In sum, the F-Type’s cabin is better, but it won’t be off-putting for those who, like myself, appreciate the unique British charm of the original. That feeling is still very much in evidence here. Don’t worry, the loud exhaust button is in the same place it was before. 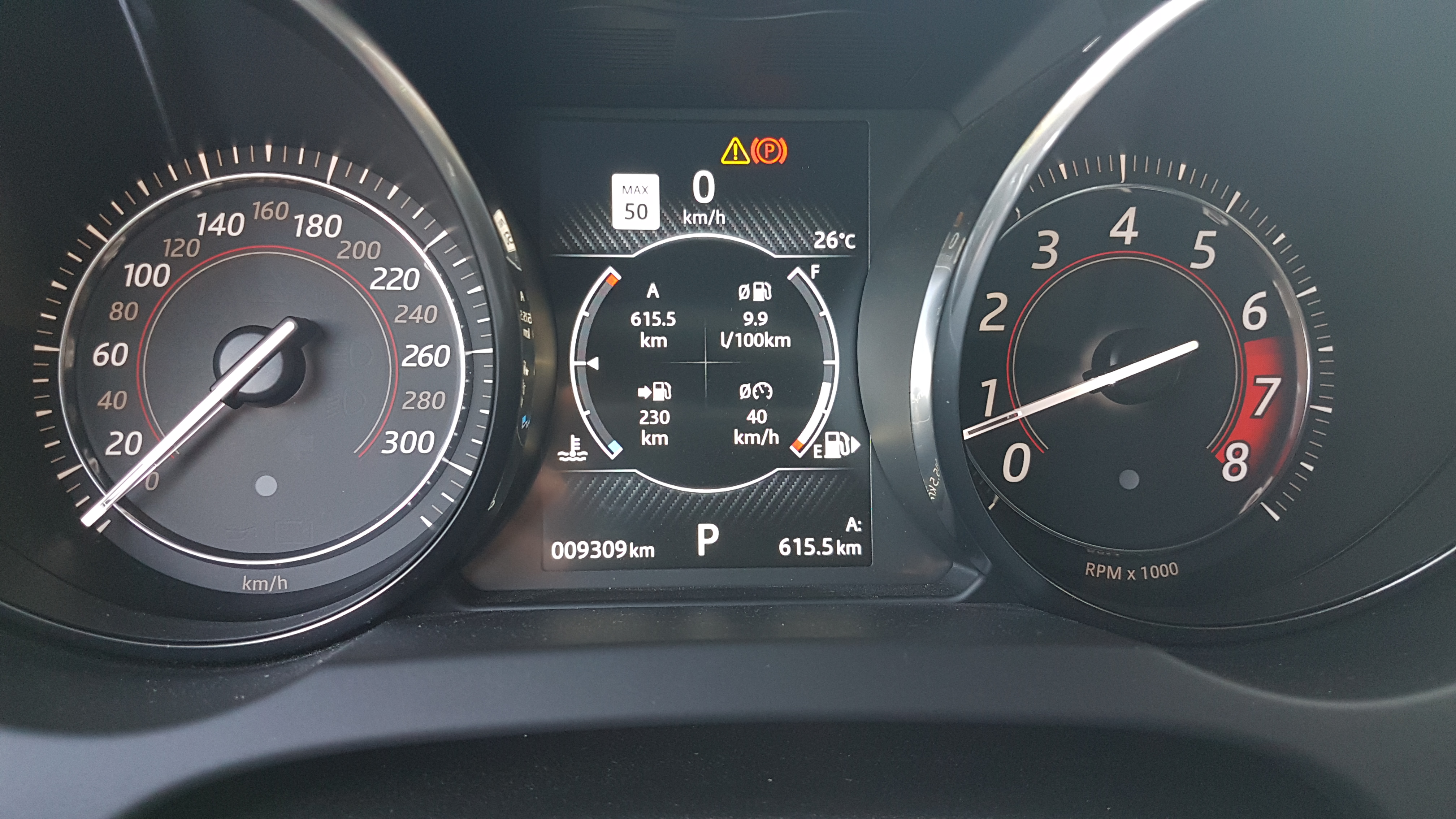 So, with the aesthetics out of the way, how does this thing drive?

Like an F-Type. Fast and fun – what you’d expect in a two-door, two-seat sports car.

Despite being powered by a smaller engine, the Ingenium turbo four F-Type is still quite quick. Jaguar’s official testing pegs the 0-100 km/h time at 5.7 seconds with a top speed of 250 km/h, so this car is still quite capable of making other cars eat its dust at a stop light.

From a construction standpoint the F-Type is big on aluminum, from its body panels, to the Ingenium engine and double wishbone independent suspension. The name of the game here is saving weight to improve responsiveness and performance. All told, the base model is 52 kg lighter than models equipped with the 340-horsepower supercharged V6, making it the lightest F-Type to date.

And the car feels responsive and light on its feet. The steering has been calibrated especially for the Ingenium engine’s weight reduction, while the front and rear spring rates have been dialed back by four and three percent respectively for the same reason.

And it works to great effect. The car feels faster than you’re expecting, yet it retains the precise cornering and direct steering that are hallmarks of the world’s best sports cars.

While throttle response from the Ingenium mill is impressive, especially in dynamic mode, it doesn’t make for a great soundtrack. I know it’s a familiar complaint, but nothing sounds like a spit-snarling, crackling and backfiring V8.

As good as the Ingenium is (in the fuel economy department too), its 4-cylinder buzz just can’t match the visceral thrills one experiences when opening the throttle up on an F-Type fitted with a 5.0-litre supercharged V8. Trust me, that’s an experience worth having if you’re into cars.

Another small nitpick here is the lack of a manual transmission option. Hey, it’s a rear-wheel drive car sports car, right? A manual option would be great, although I acknowledge the manual mode and paddle shifters work just fine with the 8-speed autobox.

With a $68,500 MSRP, the F-Type coupe presents an intriguing value proposition for those able to resist ticking too many option boxes on the order form. Plus, for a two-seater it has a surprising amount of cargo volume (408 L). 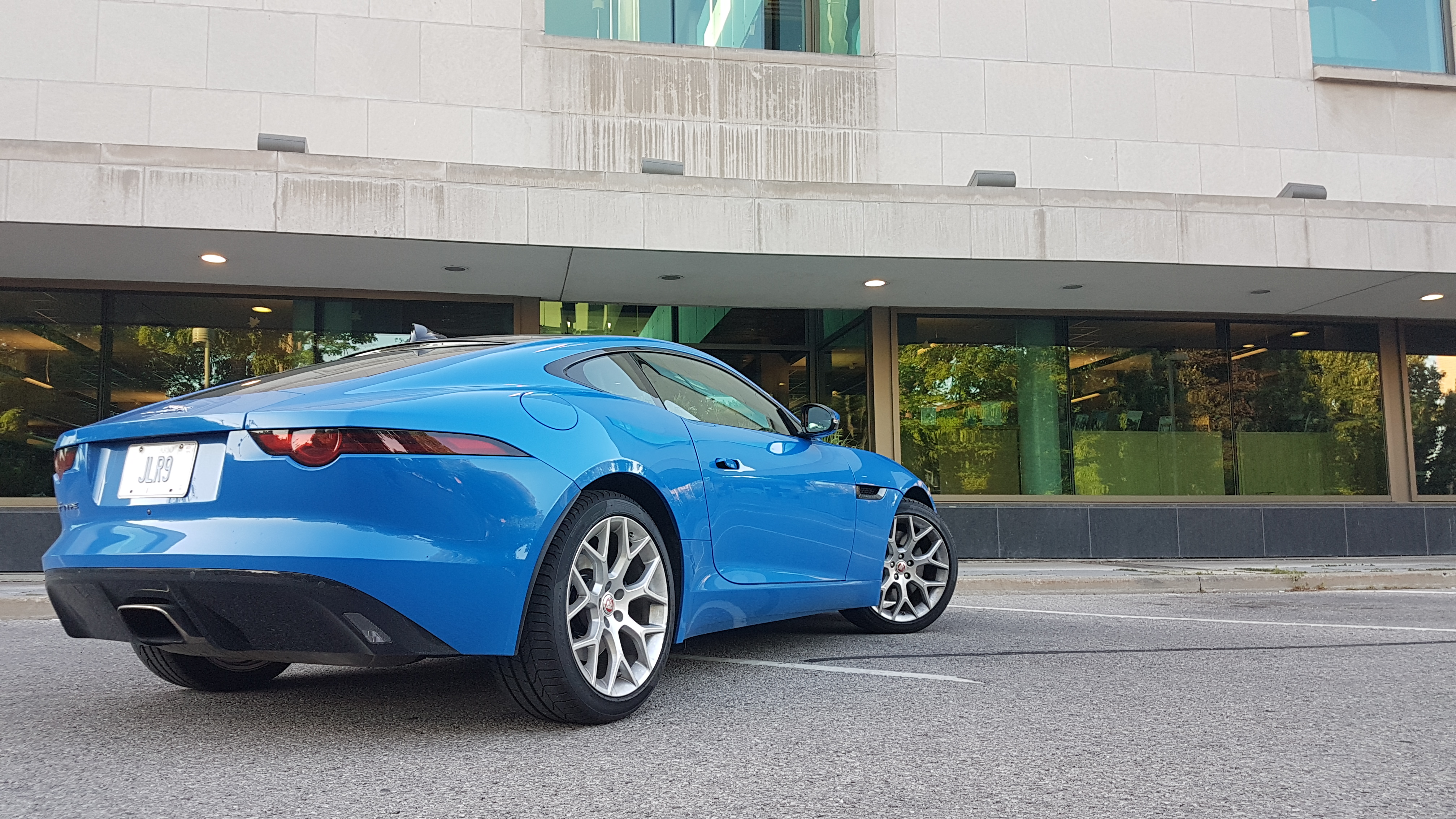