What we’re looking at is the most modern Corvette that’s been taken to all extremes. Power, handling, and braking. Never mind the truly functional, but visually ludicrous aerodynamic program. While the sounds that come out of the ZR1’s four tailpipes are offensive to some, they’re completely captivating to drivers like us. Never mind all of that – this is the most expensive road going Corvette ever.

Indeed, the ZR1 is the ultimate expression of the seventh generation Corvette and as hardcore as this track-spec ZR1 is, it’s just as comfortable and as usable as any grand tourer. Long drives are a joy and storage is bigger than Nickelback was a decade ago.

You probably already know the top line specs. There’s the 6.2 litre LT5 small block up front, and it makes 755 horsepower and 715 pounds-feet of torque. Thankfully, this tester was fitted with the seven-speed manual and it offers an unmatched driver-machine connection. There is an eight-speed auto available and it’s markedly quicker than the manual, but this is a road-legal car and it’s meant to be enjoyed in three pedal spec.

Think of the LT5 as a development of the Z06’s LT4, but to achieve an additional 105 horsepower, significant changes were required. LT4 and LT5 cylinder heads and pistons are apparently the same, and while there are countless small changes throughout this small block, the LT5 has a much larger supercharger, a different cam, as well as a stronger crank and connecting rods.

That exhaust sound is something from the Greek gods and it can be heard for miles. Thankfully there’s a quiet mode, which is helpful if you have neighbours.

Unlike the supercharged HEMI V8s in some Dodges and Jeeps, the LT5 has an almost indiscernible supercharger whine and it’s only detectable from time to time. Still, that subtle whine—along with the unavoidable sight of that big supercharger bump—is a constant reminder that there’s a stampede’s worth of horses under the carbon hood. 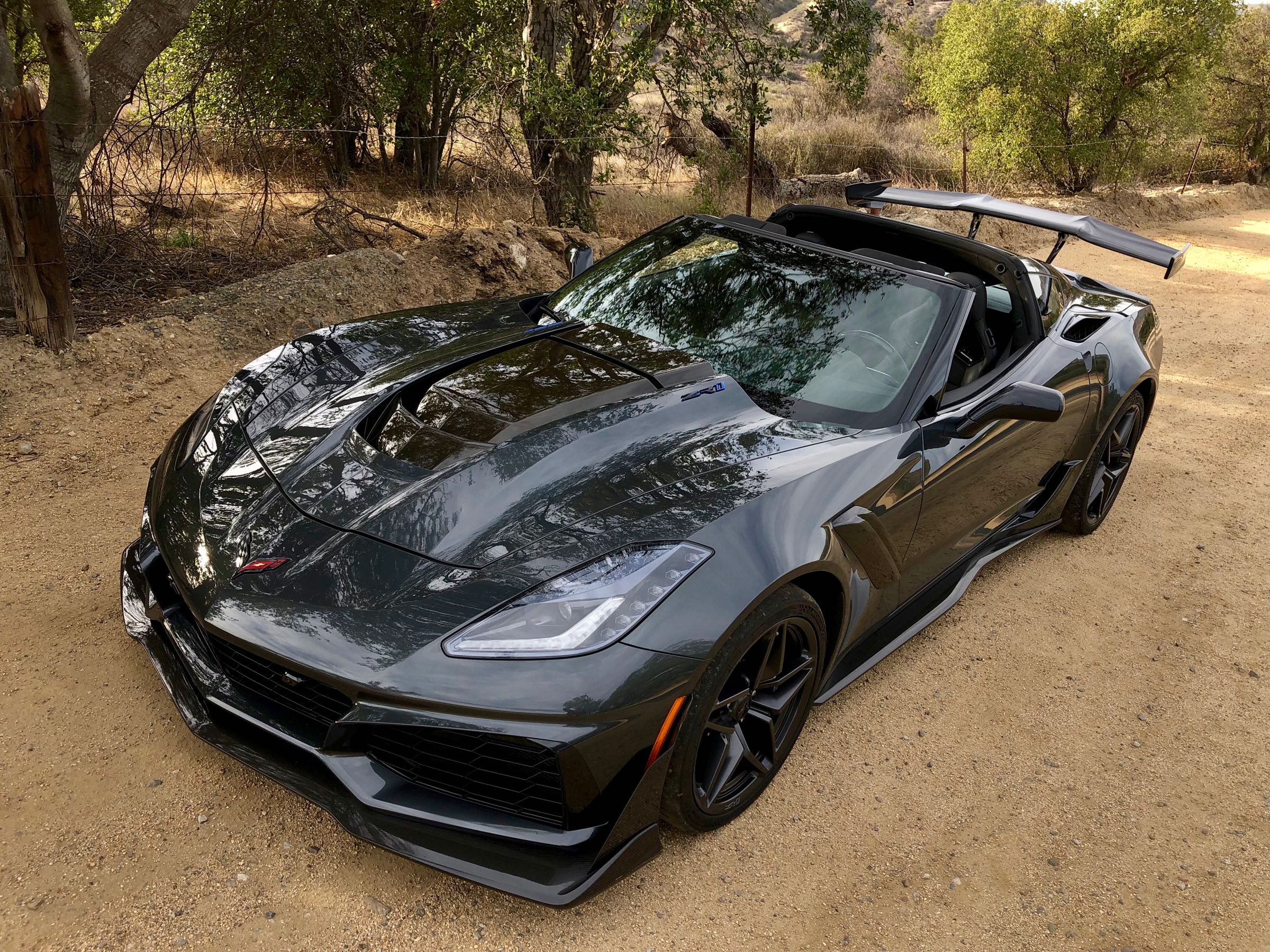 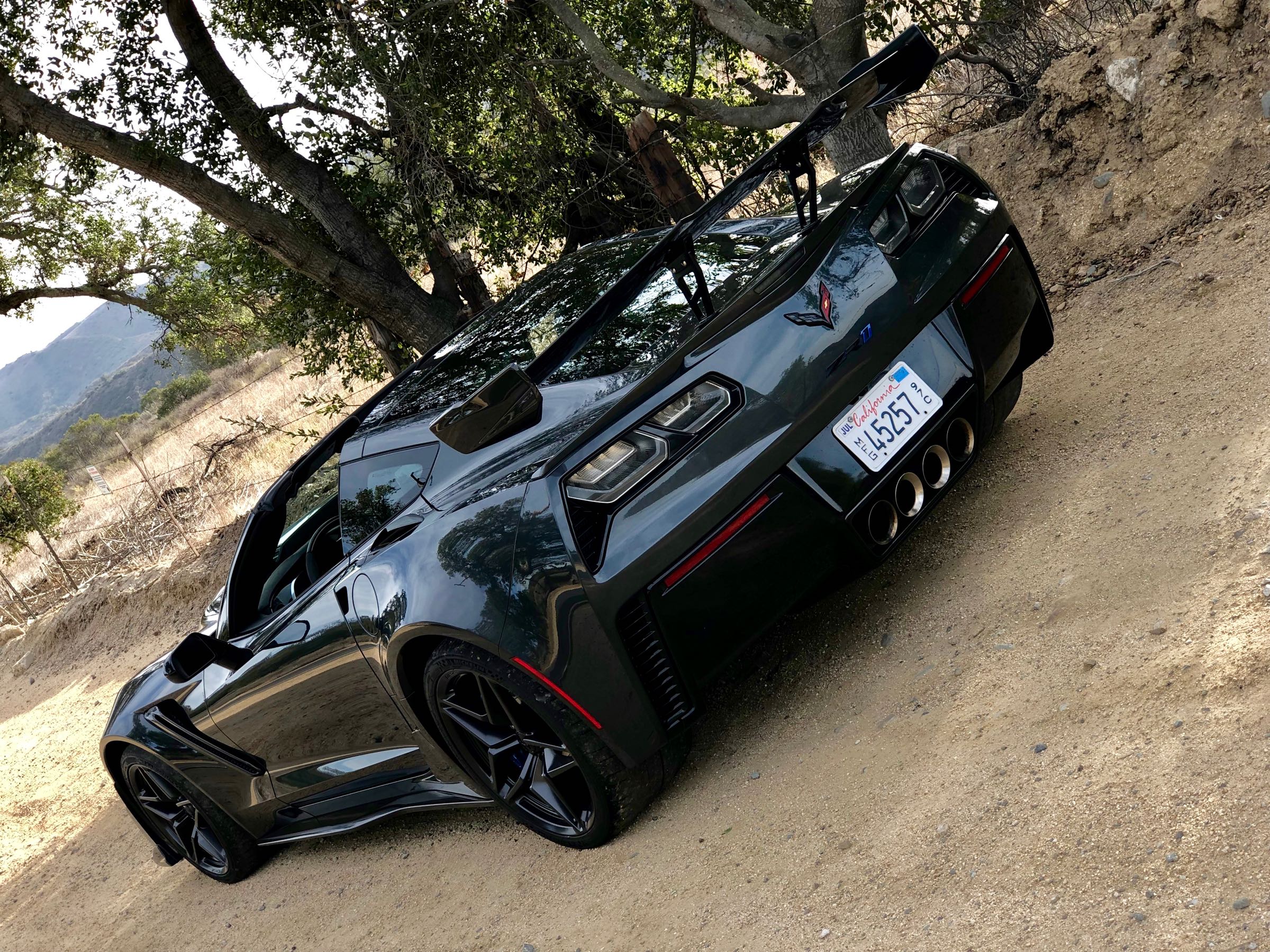 The ZR1’s chassis starts with the Corvette’s standard suspension set up with double wishbones at all four corners and the company’s latest magnetic ride dampers. Brakes are by Brembo, using the latest technology: XXL-sized carbon ceramic rotors clamped by six piston calipers up front; four-piston in the back.

The massive wing indicates that this ZR1 test car is equipped with the ZTK track package option and if you’re a track rat, you’ll want it. If you’re not going to do laps in your ZR1, you’re best to skip that option, as it compromises regular usability of your Corvette.

The ZTK package includes the front splitter end caps, as well as the tall rear wing, which has uprights bolted directly to the chassis, not simply tacked on to the decklid. There are also different spring and damper rates and track-ready Michelin Pilot Sport Cup 2 tires. The tires are basically slicks and they’re some of the widest you’ll find anywhere: 285mm wide in the front and 335mm in the back.

One of the cool bits underneath the skin of the ZR1 that often gets overlooked is the electronically-controlled limited slip differential. While a mechanical differential has a fixed amount of lockup, this one is entirely variable. It can be completely open for stability under braking, but otherwise the amount of lock is optimized in real time depending on what the car needs and what the driver is asking of the car. That’s one of the reasons this car is so darn sure footed all of the time.

With lessons taken from the Z06, Corvette engineered significantly more thermal capacity into the ZR1 and there’s enough cooling on board to air condition all of Michigan for the month of July.

In terms of street presence, it’s the ZTK’s aero package that makes the entire statement. Everyone knows it’s a Corvette and everyone knows from its looks that it is the new King of the Hill. Its universal appeal has you making friends everywhere you go. 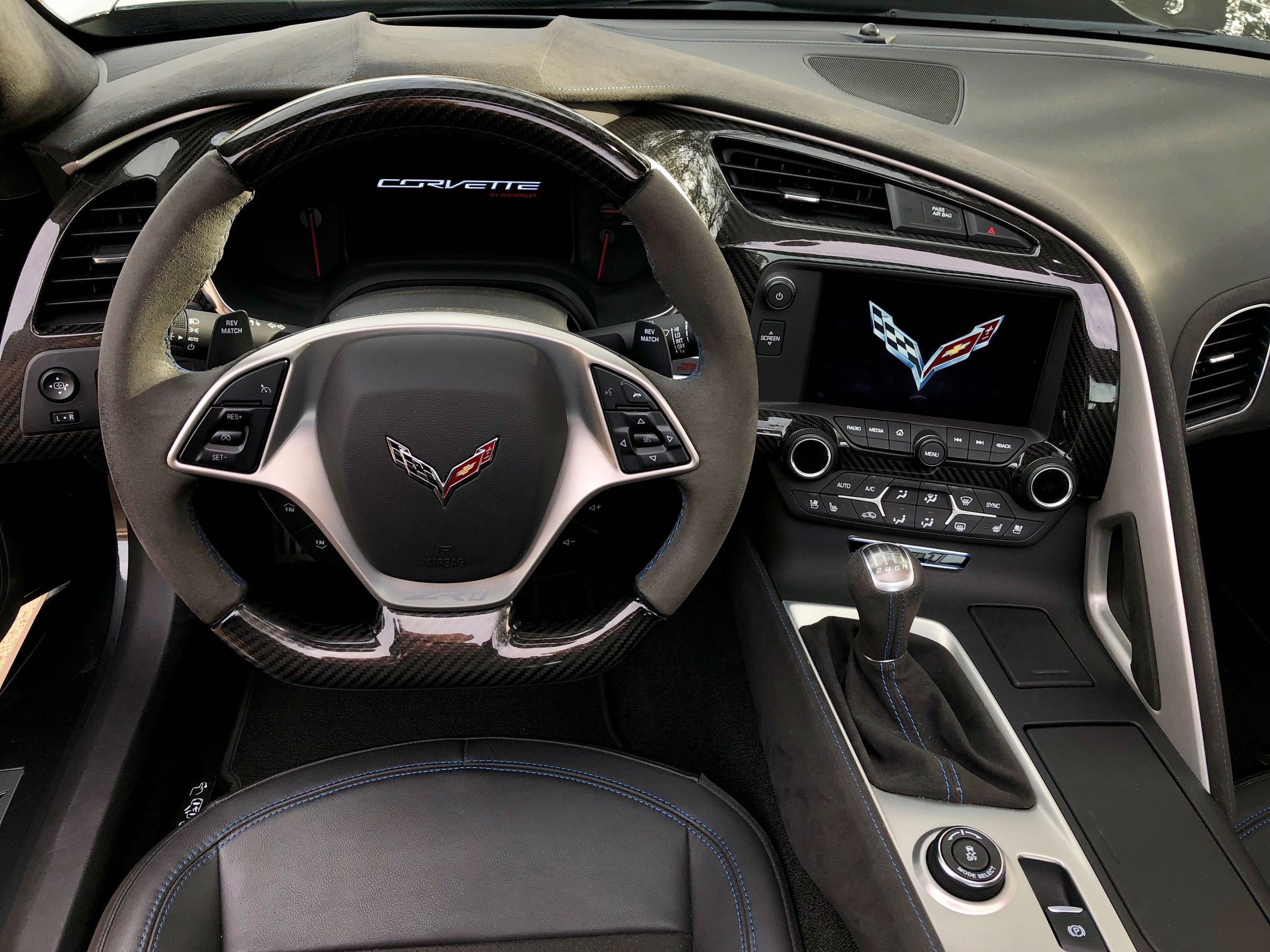 You remember that all seventh generation Corvette coupes are actually targas, don’t you? Indeed, and thankfully, the carbon roof panel is ultra lightweight, so handling it is a simple, one-person job. Pull three levers and you can lift the panel and stow it easily under the hatch.

However, Corvette coupes should really be coupes because when the roof is stowed and you’re driving at speeds at anything over eighty kilometres an hour, there’s an annoying amount of wind noise. As much as open cars are a delight, a Corvette coupe with its roof panel stowed is suitable for low speed cruising only.

Despite the ZTK’s firmer springs and damping, this ZR1 doesn’t shudder or shimmy over bumps. The suspension simply works, and body and wheel control is impeccable. Those sticky tires stay in contact with the road and ride quality is surprisingly compliant. The dampers are the latest gen magnetic ride, which can adjust to changing road surfaces in less than fifteen milliseconds. Unlike plenty of other tuned factory specials, this ZR1 is not an uncomfortable, hard-edged Nurburgring special.

Steering is an electrically assisted, variable ratio rack and pinion system and assist is offered at different levels, from light to firm. Turn in response is sharper than any previous Corvette, with much of the credit due to the Michelins, plus this ZR1 is the sort of supercar that you can drive visually, without having to rely on steering feel.

Why would you want to do without steering feel? When the electric power steering is at its firmest, it seems artificial and heavy and simply doesn’t feel quite right when you’re hustling the ZR1. Feel is perfectly fine in the steering’s lightest mode, but perhaps some customers have requested the extra-hefty mode, but it doesn’t alight with what is an otherwise exceptional driving experience.

What’s it like to unleash all 755 horses? Well, it’s a lot like driving a Stingray…with a Titan rocket strapped to the roof. It’s one of the quickest accelerating cars that truly works in the real world. You can put massive gobs of power down any time you like and, even if you do get some wheelspin, it’s entirely controllable. Plus, if you’re a qualified pilot, the traction and stability systems give you the necessary latitude so that you’re never fighting the software. That’s a testament to the ZR1’s excellent chassis development.

This ZR1 is so powerful and has such long gearing that it demands plenty of room to run. Regular roads, no matter how beautiful or fun don’t do it justice. Rather, perhaps what it really takes to fully enjoy this big dog Corvette are big dog race tracks. Not just any circuits, either – classic road courses like Canadian Tire Motorsport Park, Watkins Glen, Road America, and Road Atlanta, with their wide-open straights and fast corners would be exceptionally rewarding to drive.

On the other hand, mastering the ZR1 isn’t out of reach. For any driver with a reasonable amount of high performance driving experience, it’s very approachable. Sure, an abrupt dose of throttle and those Michelins are instantly turning into smoke—which is always fun—but the chassis is so buttoned down, the feedback so high fidelity, the cockpit so perfectly designed, and visibility so crystal clear, that you can use all of its performance when you desire. As long as you’re listening before you get too far over your head, the ZR1 gives you all the communication you need to improve your driving skill set. 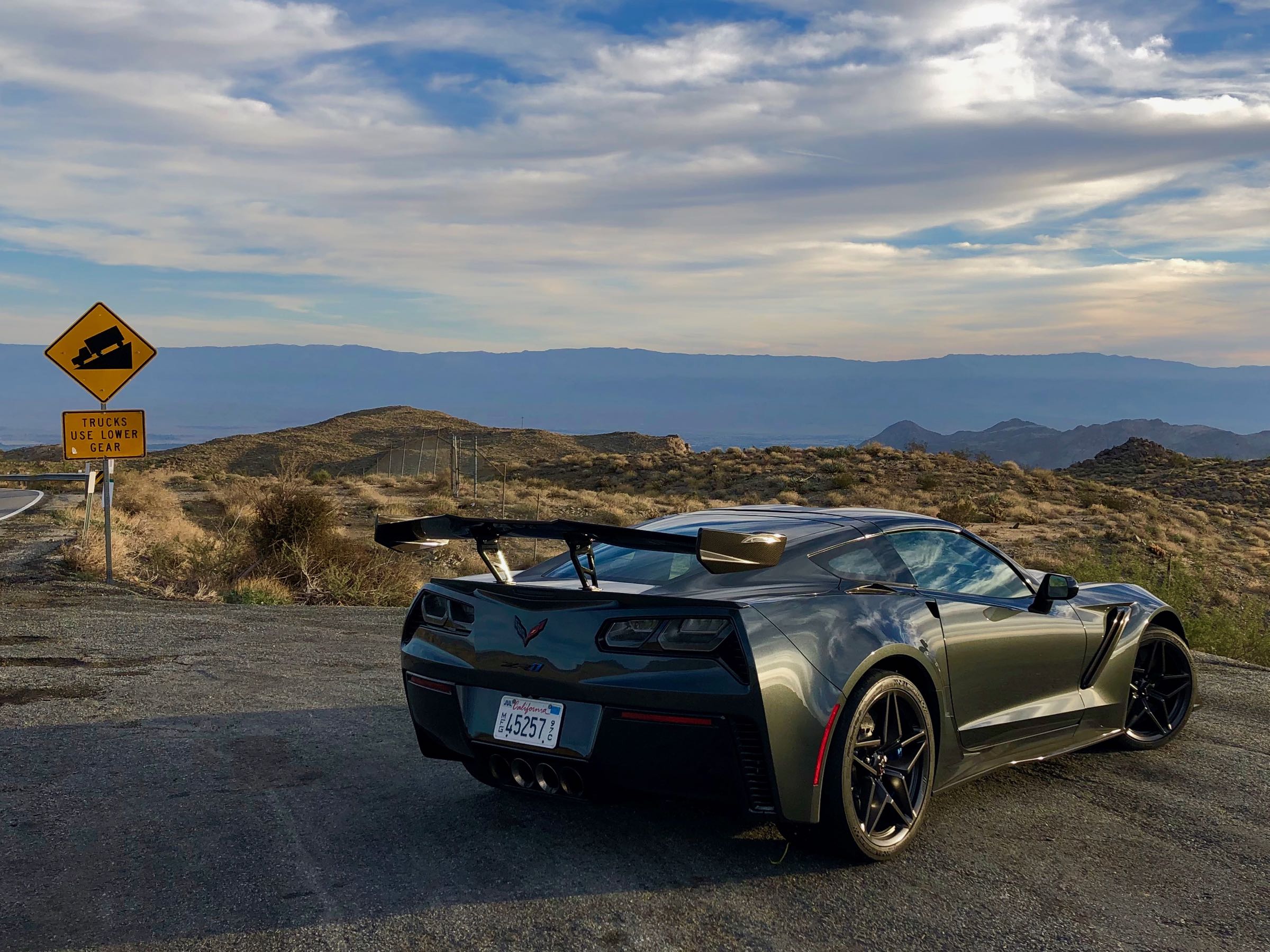 The Corvette’s cabin doesn’t stray too far from the Stingray, but when it does, it steps up its game with premium materials. There are splashes of carbon fibre and Alcantara everywhere. First level ergonomics including the seats, wheel, pedals and shifter are great, but the much of the interior—the climate controls, some of the switches and buttons, and the infotainment interface—is now becoming dated. On the other hand, the optional competition seats are the ones to get. They’re heated, cooled, and massively supportive, and are essentially supercar seating perfection.

Given the excessive performance and presence of the ZR1, it’s easy to overlook that it’s fitted with plenty of creature comforts, including a respectable Bose sound system, and some current tech, like OnStar’s wifi hotspot. Save for perhaps a front-axle lift system, this is one very well rounded Corvette.

This ZR1 is a complete package of American supercar goodness and it might be the one summer car that does it all. It’s thoroughly enjoyable to drive, it’s got loads of comfort and plenty of cargo capacity, but more importantly, it’s got the capability to crush the egos of exotic car owners at the racetrack. Perhaps, in a nutshell, that’s the spirit of Corvette – authentic performance, at a very competitive price point, which equates to an unparalleled performance car value.

We take a Bunch of Porsches on Track…Because Why Not?