A Mustang is one of the few remaining cars on the market that can be specified with a big honking V8 motor and a proper three-pedal manual transmission. A bastion of hope. And even they aren’t safe from extinction.

Like the new mid-engine C8 Corvette—historically always available with a manual—will only offer a dual-clutch automatic going forward.

Rowing your own gears just isn’t popular anymore and take rates for manual-equipped cars are at an all-time low. Complex electronics and automated driving systems are finding their way into even entry-level cars and it’s becoming too expensive for automakers to continue offering them.

So when I learned that Ford had a 6-speed manual equipped Mustang GT on their press fleet I couldn’t reserve my seat in it fast enough.

America’s Pony car originator has been a big seller for Ford ever since it debuted in 1964. Selling over 10 million copies in that time, it is the world’s best selling sports car and one of the most recognizable nameplates in the industry.

The sixth-generation (S550) Mustang debuted for the 2015 model year and brought some of the biggest changes to the platform in five decades. It was the first to get an independent rear suspension replacing the archaic live-axle setup and it was the first one offered from the factory in right-hand drive for select European and Asian markets. It also got turbo power joining the options list with Ford’s Ecoboost 4-cylinder finding itself in between the pony car’s shock towers producing more power and torque than the base 6-cylinder.

A thorough refresh in 2018 gave the Mustang LED lighting, restyled bumpers and grilles, a new 10-speed automatic option, more power for the 4-and 8-cylinder engines (the V6 was dropped from the lineup), a new 12-inch digital instrument cluster, and MagneRide magnetic dampers.

And that brings us to the Race Red 2019 Mustang you see here which soldiers on with relatively few changes.

One of them is the addition of automatic rev-matching on the 6-speed manual that will perfectly blip the throttle on downshifts ensuring buttery smooth gear changes and negating the need for that heel-and-toe technique you’ve been practicing. For those that would rather do it themselves, fear not, it can be turned off. 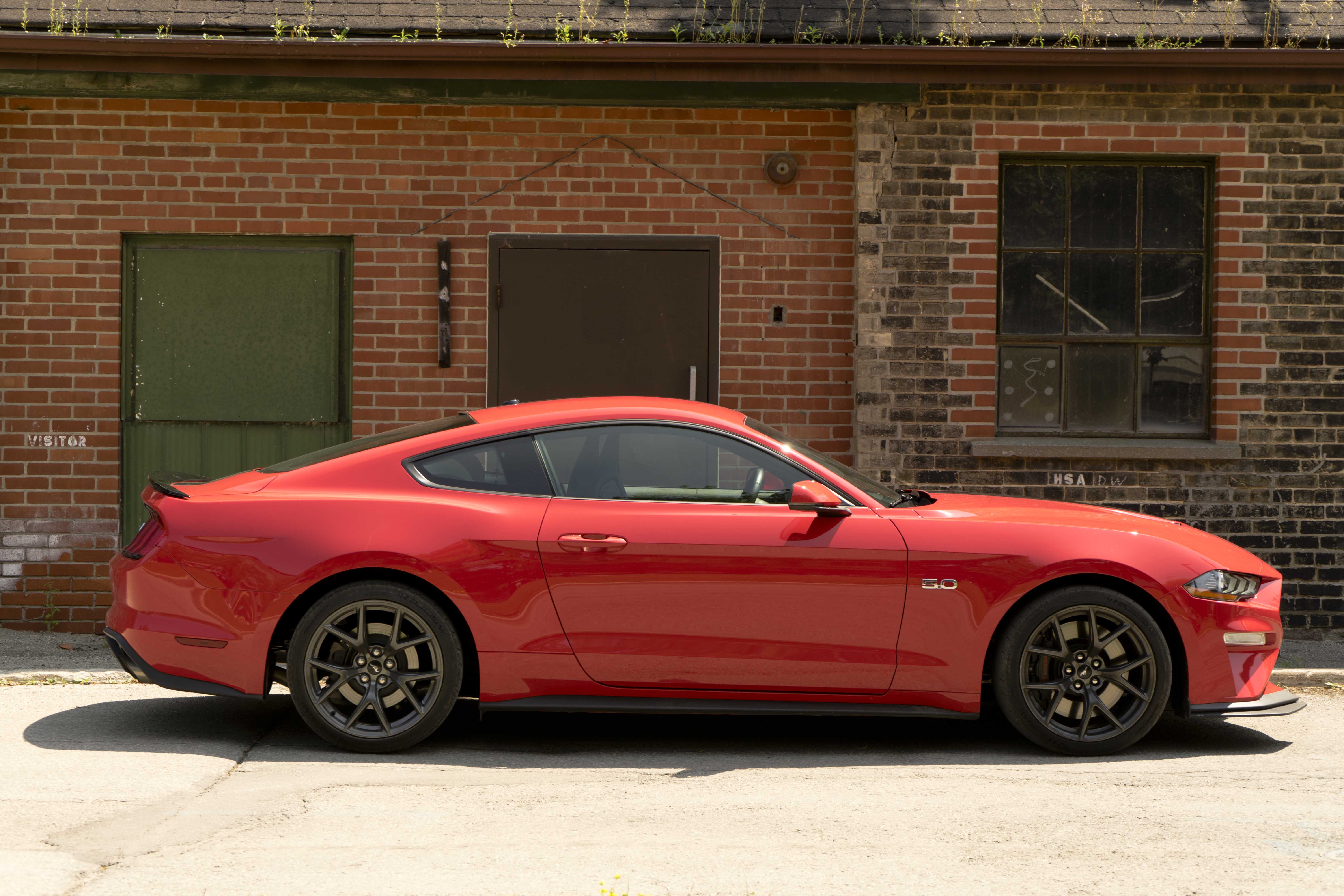 Ford has built in many ways to customize your Pony car experience. Most are accessible through the optional 12-inch digital gauge cluster. Cycling through the drive modes will change the look and layout of the gauges. You can also set a custom colour of your choosing. If the active valve performance exhaust is equipped you can pick from multiple exhaust modes ranging from Quiet all the way to Track for the full visceral experience. You can set a shift light and a shift tone to remind you when to change gear; select launch control rpms, display ancillary gauges like air/fuel ratio or axle oil temperature, and there’s a custom drive mode that can be used to configure the car to your exact parameters if the pre-configured modes don’t give you the experience you’re looking for.

For those that plan to take their Mustang to the track, there are two performance pack levels to choose from. My tester was equipped with Performance Pack 2—roughy equivalent to 1LE on a Camaro SS—and that included an ankle-slicing front splitter, ultra-wide wheels shod with super-sticky 305 section Michelin Pilot Cup tires at all four corners, upgraded Brembo brakes, a larger radiator for increased cooling, track-tuned springs and sway bars, an upgraded Torsen limited-slip differential, and magnetic ride dampers among other go-fast goodies.

Surprisingly livable, the rock-hard setup wasn’t nearly as bad as I expected it to be on crappy Toronto roads thanks to those magnetic shocks than can stiffen or loosen in milliseconds providing a firm but still acceptable ride. 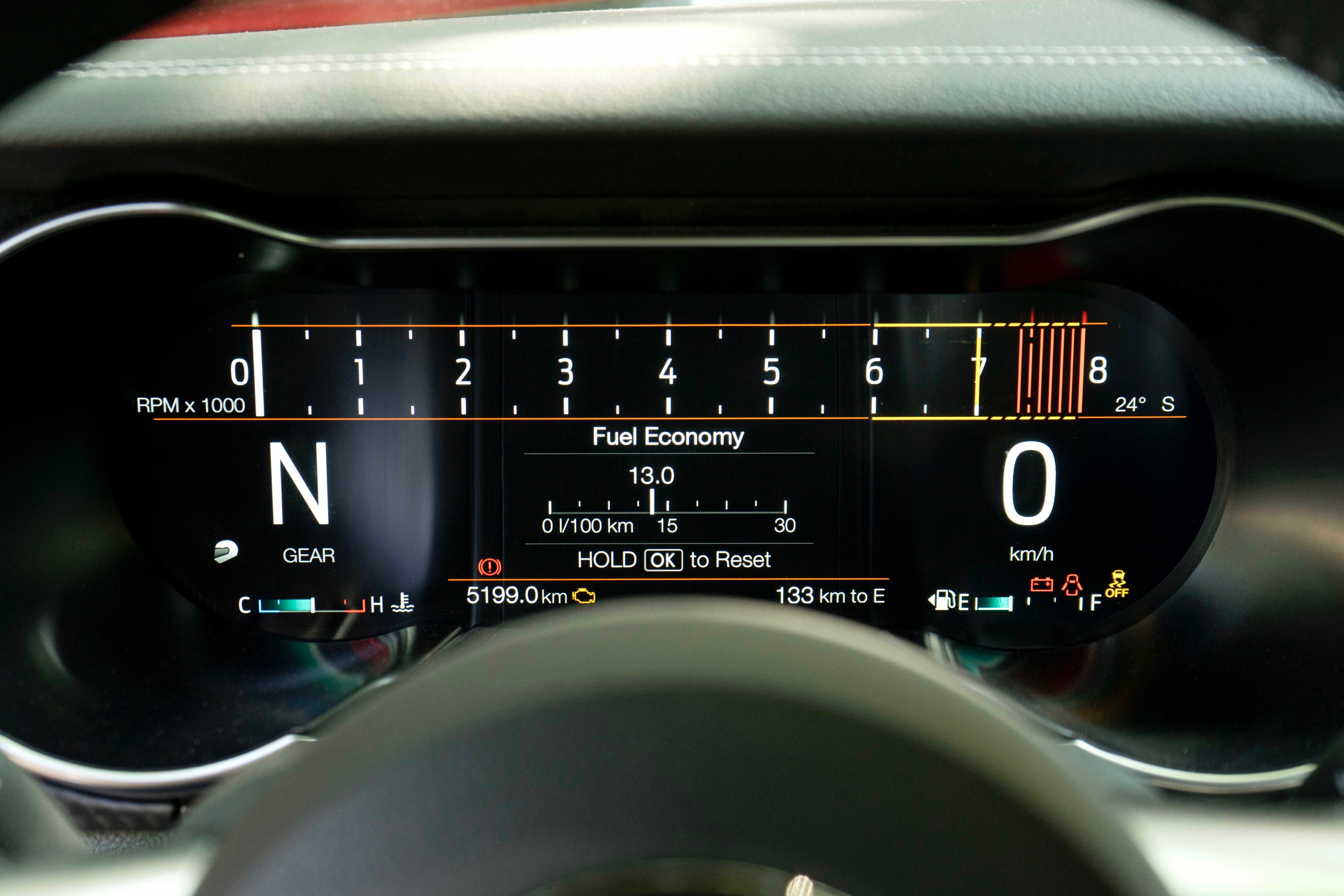 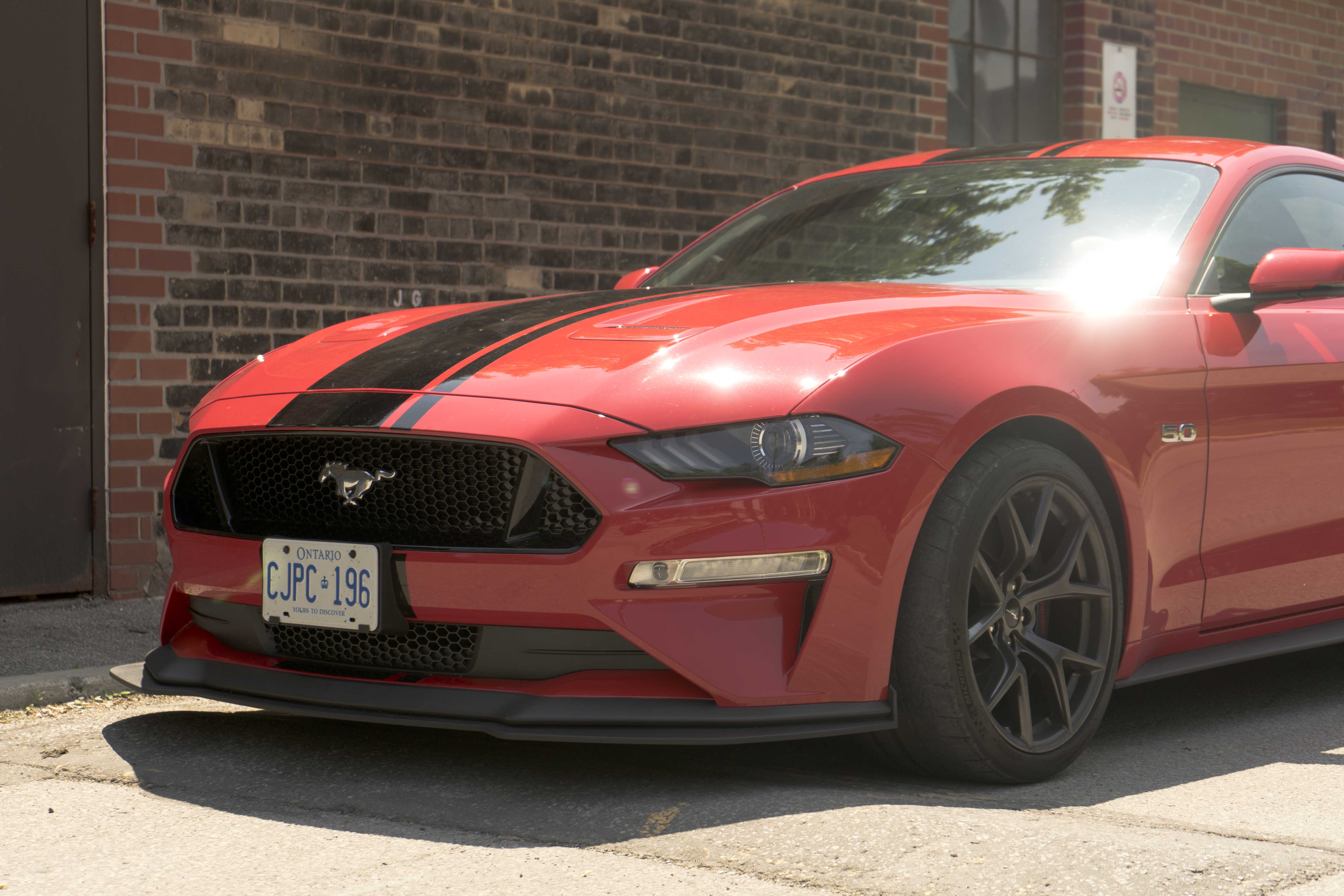 Once seated in the supportive and comfortable Recaro buckets (optional) all controls fall easily to hand. But as good as the seats are, they cannot be heated or cooled and aren’t power adjustable.

The Mustang’s retro-inspired interior isn’t going to win any quality awards with rather tacky looking trim and quite a bit of hard scratchy plastic, around the centre stack. However, there are some cool touches. Like a row of slick toggle switches for changing steering heft and drive modes that goad you into flicking them for no reason at all. 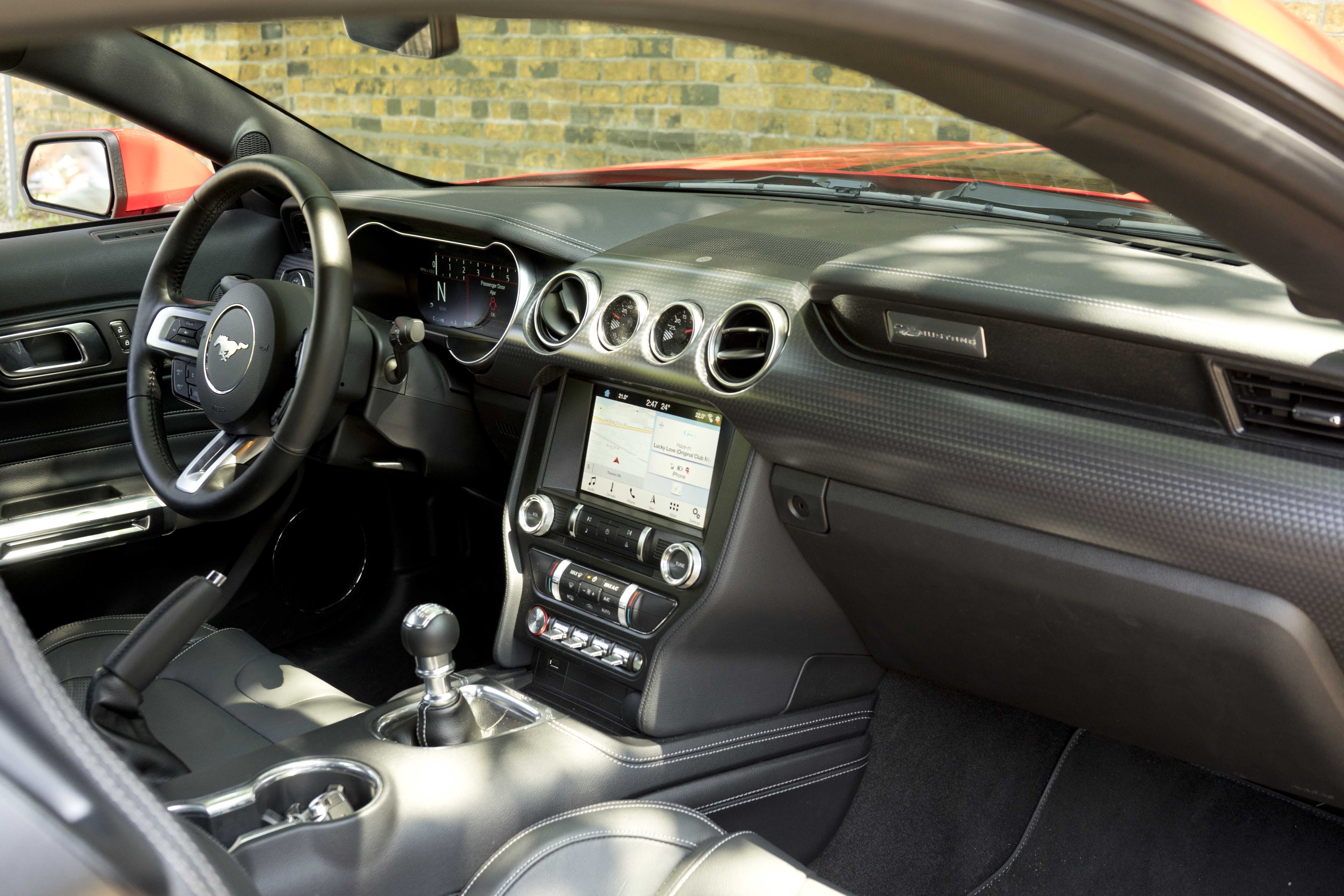 To the left of those toggles is the engine start button pulsing red like a beating heart. Pushing it fires up the mighty Coyote 5-litre V8 that sounds like a brewing thunderstorm just behind the firewall.

The slightly heavy clutch pedal has a long travel and a high take-up point. Snick the positive short-throw shifter with its well-defined gates into first and you’ll find that setting off doesn’t require any throttle at all. Torque builds quickly right off idle. Give it some gas and ride the wave. That burbly thunder turns into a deep guttural basso flooding your ear inner ear with a pure mechanical symphony unencumbered by noise-sapping turbochargers.

As the tach sweeps past 3500 rpm, the rumble turns into a yowl and your torso gets smooshed into the Recaro seat. There’s no relief until you hit the 7500-rpm limiter. The engine revs fast so you have to time the shift to the next gear a few hundred rpm before redline to avoid fuel cut-off. Do it correctly and you’ll be heading into demerit-point territory in no time at all. On a dragstrip Ford claims a GT will hit 100 km/h from rest in under 4 seconds. There’s not much out there that can keep up at this price point.

The Coyote V8 tends to get overshadowed by the flat-crank monster in the Shelby GT 350 but it shouldn’t. This direct-and port-injected 5-Litre “cammer” is one of the great engines of the modern-day. What makes it even better is its efficiency when you aren’t doing gonzo runs to redline. Slow everything down and you’ll easily see under 10 litres per 100 km on the highway. And after a week of driving in hot, humid summer weather, the A/C on one hundred percent of the time, the Mustang registered 12.9 litres per 100 km. Considering you get 460 hp and 420 lb-ft of torque (on premium fuel) that’s an impressive figure. 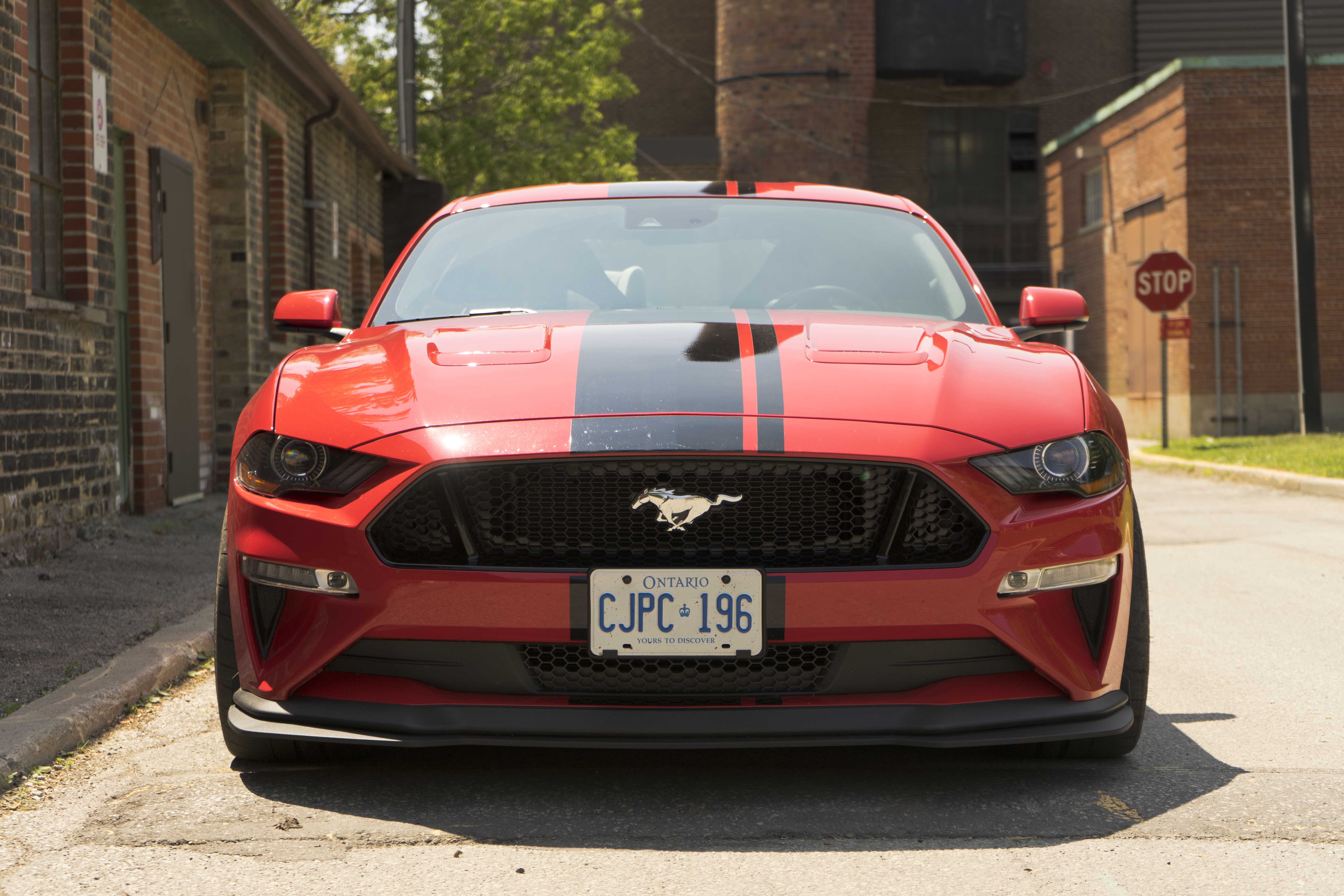 With a curb weight of just over 3700 lbs, this big GT is not a light car but it is surprisingly agile, all things considered. Even badly worn, the fat Cup tires when warm had enormous grip reserves embodying the car with impressively high limits. Slapping on a set of Michelin’s barely-legal rubber is a bit like cheating on a math test but the tradeoff is minimal adhesion on wet roads. Puddles should be avoided like a Justin Bieber concert.

Not having a racetrack at my disposal meant that exploring more of the Mustang’s capability was never going to happen, but you can get a snapshot of its abilities even when driving at 4/10ths.

Surprisingly clear messages are delivered through the rim of the rather large steering wheel. Turning in hard produces just a whiff of body movement as the magnetic dampers instantly stiffen. Add in all that stick and the GT feels like it can take any corner at any speed. The tail remains planted but can be coaxed loose with a bootful of throttle. 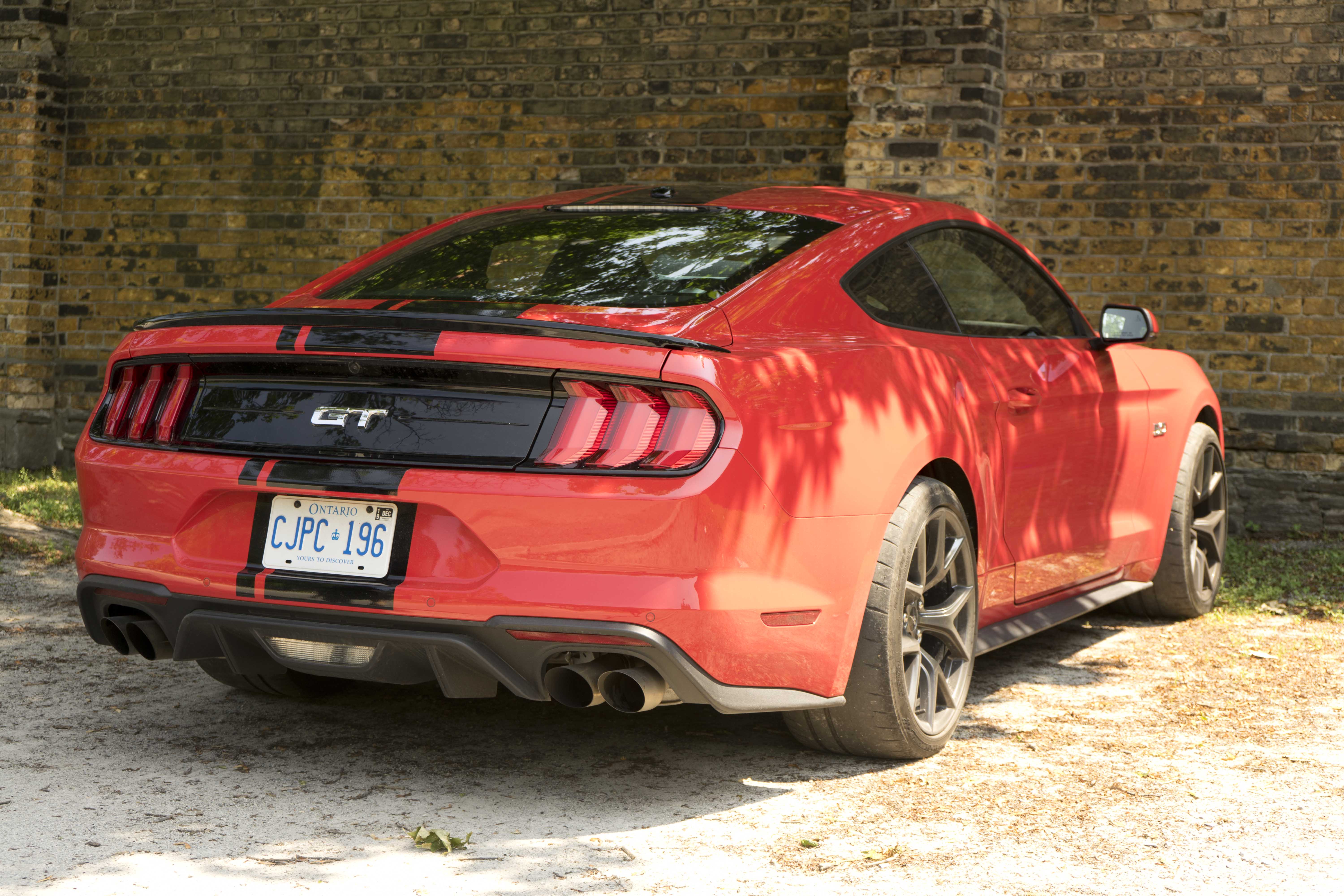 A Camaro SS with the 1LE package delivers a more refined handling experience and crisper steering while the Mustang demands a bit more from the driver, keeping you more on your toes but ultimately delivering the bigger smile.

It also helps that you can see out of the Mustang as opposed to the Chevy, and there’s a much larger dose of practicality in interior storage and trunk capacity. Out in the real world the Mustang is the better vehicle, the more complete package.

Rear seat space is as expected—only for small children. But I was able to squeeze our rather large child seat back there so that my 2-year old son could experience the sweet song of the muscly V8 lump in front of us. Going off the big grin on his face, I think he approved.