Arguing for and against an Ontario-built SUV.

Being forced to admit that I’m not a huge fan of a Canadian-built car is not my favourite thing.

After all, well-paying Canadian manufacturing jobs are incredibly important, and they’re harder to come by these days. My dad spent decades of his career building cars in Southern Ontario, and I was raised off the resulting income and stability it provided. The last thing I ever want to do is recommend alternatives to products that help similar families pay their bills.

That said, I’m also paid to be honest, and this is one of those times where my brain is at odds with my heart. I really want the Lexus RX to be one of my favourite SUVs of all time. But it’s not. At least, not right now. 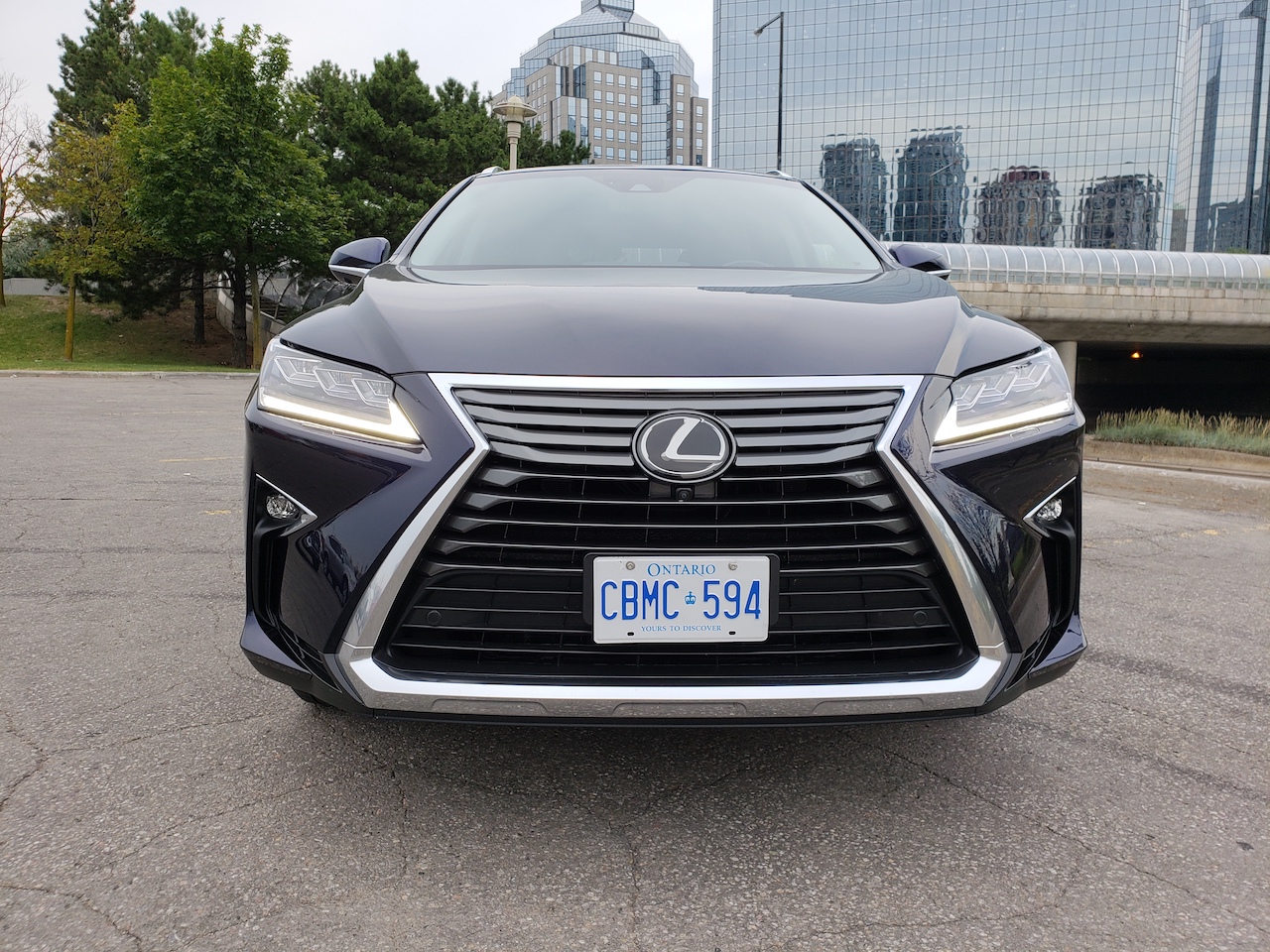 It’s the best-selling vehicle in its segment in Canada right now, though, so plenty of people clearly disagree, which is great as far as I’m concerned. And no car is ever all good or all bad, so it can certainly be said that the RX has plenty of positive things going for it.

To that end, here’s a balanced look at the Cambridge, Ontario-built Lexus RX 350 – both as it is now and what’s to come, which are two sides of a coin worth weighing at the moment.

If there’s one thing to count as an upside in the Lexus RX 350, it’s the powertrain. Although the 3.5-litre V6 is naturally aspirated, the 295 hp is a good amount for a vehicle of this size and weight – with a 1,990 kg curb weight, it doesn’t do too badly when compared against its competitors. Plus, while its 268 lb-ft of torque doesn’t come in as early as it would in a turbocharged or electrified powertrain, its peak at 4,700 rpm is low enough that it makes its presence known under heavier acceleration. (If that pep at lower speeds is more your preference, the 450h hybrid version of the RX might be a better fit.) The throttle response is a good fit for the car: smooth, comfortable, and confident. All-wheel drive is standard, and the eight-speed transmission and throttle are adjustable with the three-level drive mode selector. 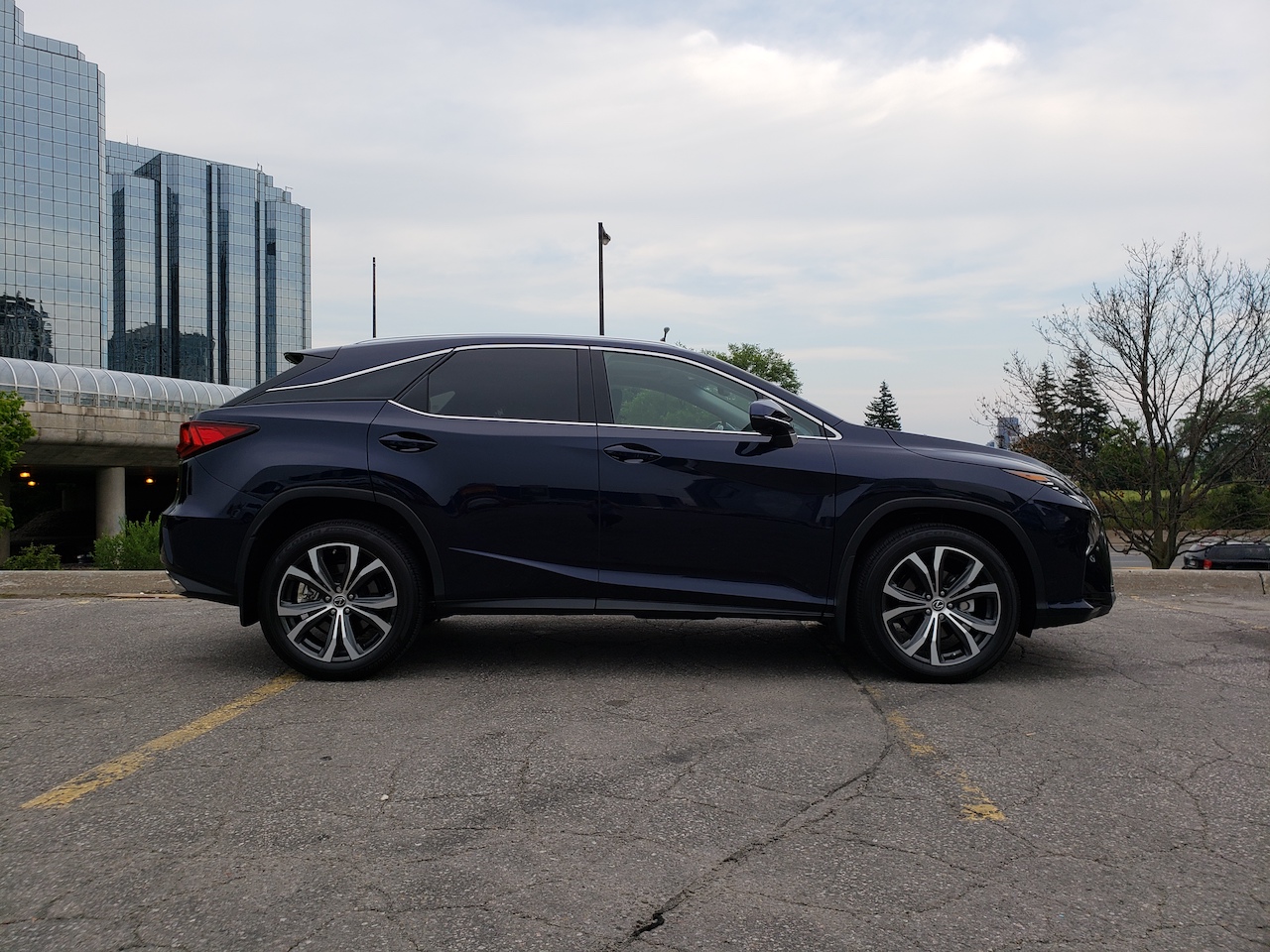 An interesting point about this engine is that it’s the same one that goes into several Toyota products including the Tacoma and the Sienna, and it isn’t listed as requiring premium fuel, which is recommended for the hybrid version that goes into the 450h. There’s too much to factor in to say accurately whether this would amount to a cost savings at the pumps in the long run. It could be that the hybrid, if driven conservatively, might use less fuel and run more cleanly on premium to offset the savings of putting regular into this one. But if you want a luxury product and you’re the sort of person to pump regular in no matter what, this could be a good choice.

As for fuel consumption figures, they’re just about average for the segment at 12.2 L/100 km in city driving, 9.0 on the highway, and 10.8 combined. I spent a week with it and returned an average of 11.9 after doing a lot of city runs with some short bursts of highway driving in between (but that’s Toronto highway, so there’s only so often that it’s actually moving).

What I’m less enamoured with is the steering feel, which is looser than I prefer, and the ride quality. The suspension travels with the road a fair amount and feeds those bumps and bounces back into the cabin.

Design is highly subjective, and I don’t like to yuck someone else’s yum, as the kids are saying these days. But I find that the highly angular look works better on smaller models than it does on the RX’s exterior, although I do appreciate the level of detail in the premium headlamps, which are part of the Executive package, and the subtle echoing of the three stacked squares that’s repeated in the taillights.

The interior on this unit appeals to me even less. The red-on-brown-on-black colouring and the pinstriping on the panel around the cupholders makes me feel like this is intended for a demographic that’s, well, not me, and as a 40-something mother I tend to think I’m pretty much exactly this car’s intended demographic. But again, taste is very personal. 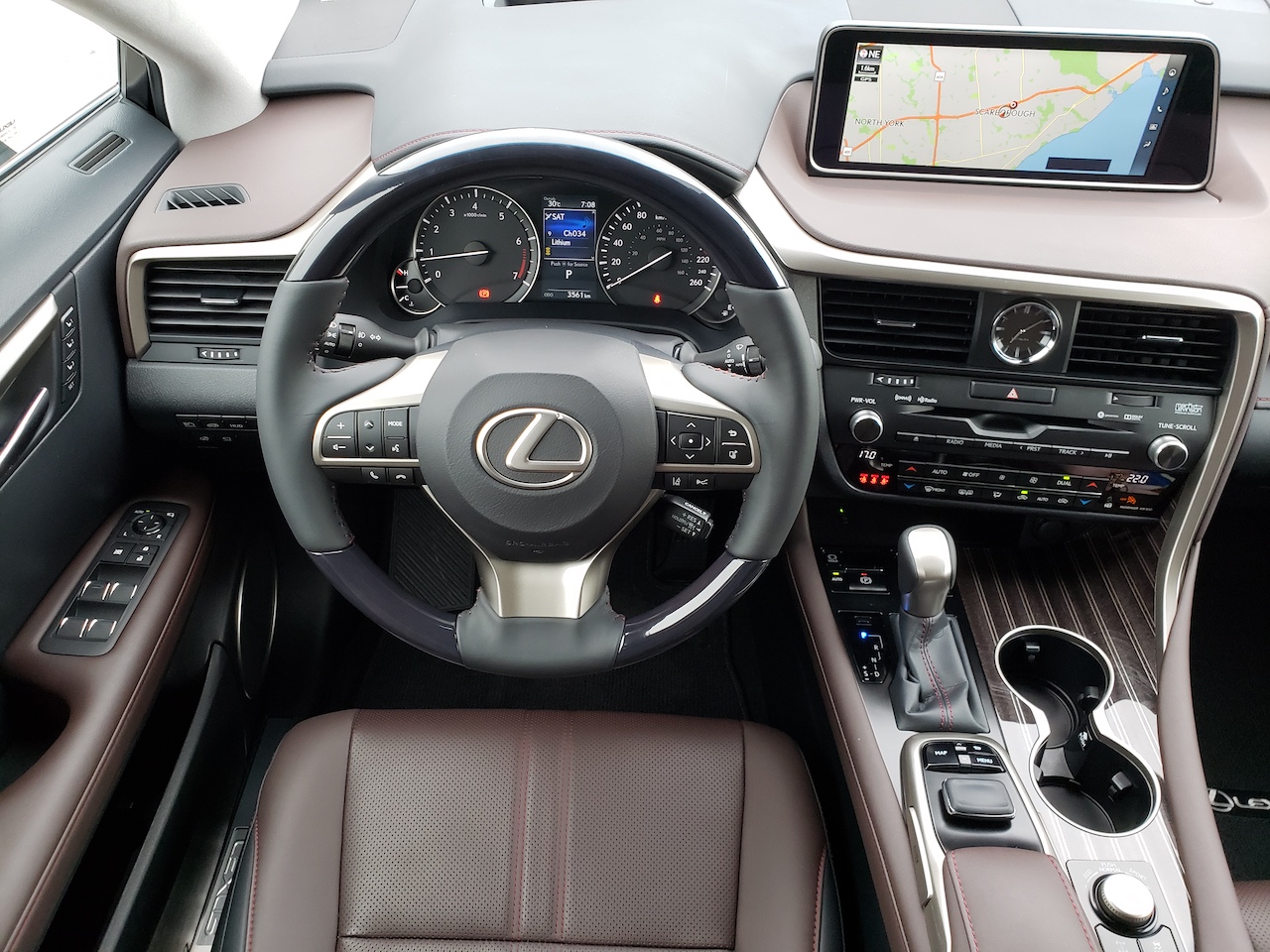 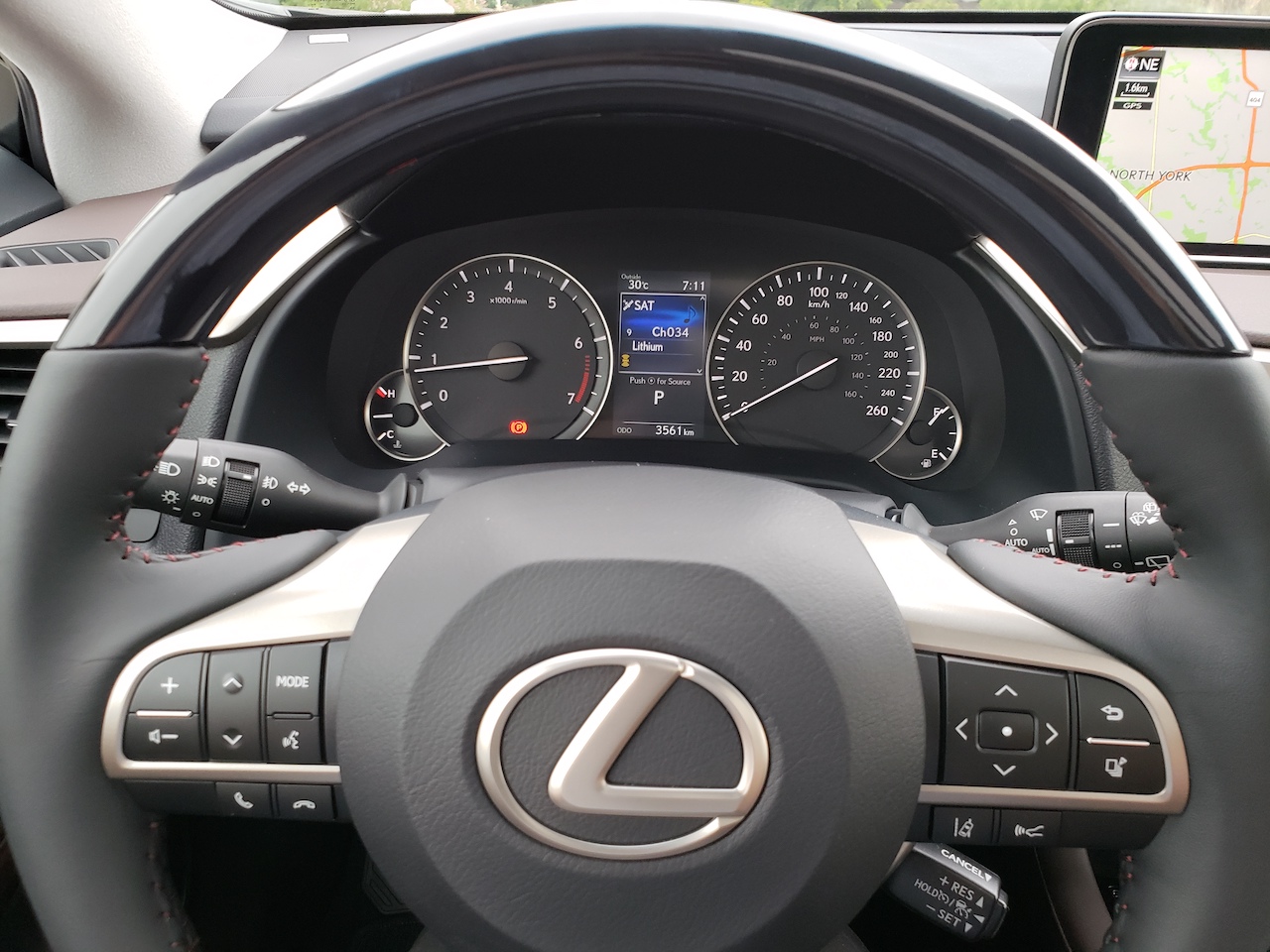 A couple of years ago, Lexus launched a longer version of the RX that’s available with a third row. The RX 350L adds 11 cm to the length and roughly $11,000 to the base price. (This also includes a wheel size upgrade to 20 inches, while 18-inch wheels are standard on the shorter model.) As it stands, the standard-length RX is 4.8 metres long, so it’s a sizeable vehicle to begin with. In either iteration, much of that space goes into the front row, which is roomy enough that even my tallest passenger, who measures at 6 feet and 4 inches, was pleased.

One of the top selling points for Toyota and Lexus right now is in safety features, and that’s the case with the RX as well. The Lexus Safety System+ suite of technologies is standard, which includes forward collision mitigation, lane departure alert, adaptive cruise control, and automatic high beams, and blind spot monitoring is also included for no charge.

Outside the realm of safety, other highlights of standard equipment include heated and ventilated front seats, and heated rear seats, steering wheel, and exterior mirrors. This test unit includes the Executive package, which is pricey at $13,250, but adds the larger 20-inch wheels plus wood grain on the steering wheel, a 15-speaker surround sound audio system, power adjustable front seats with lumbar support and power-folding rear seats, a wireless charger, a head-up display, and the 12.3-inch infotainment display among other features. 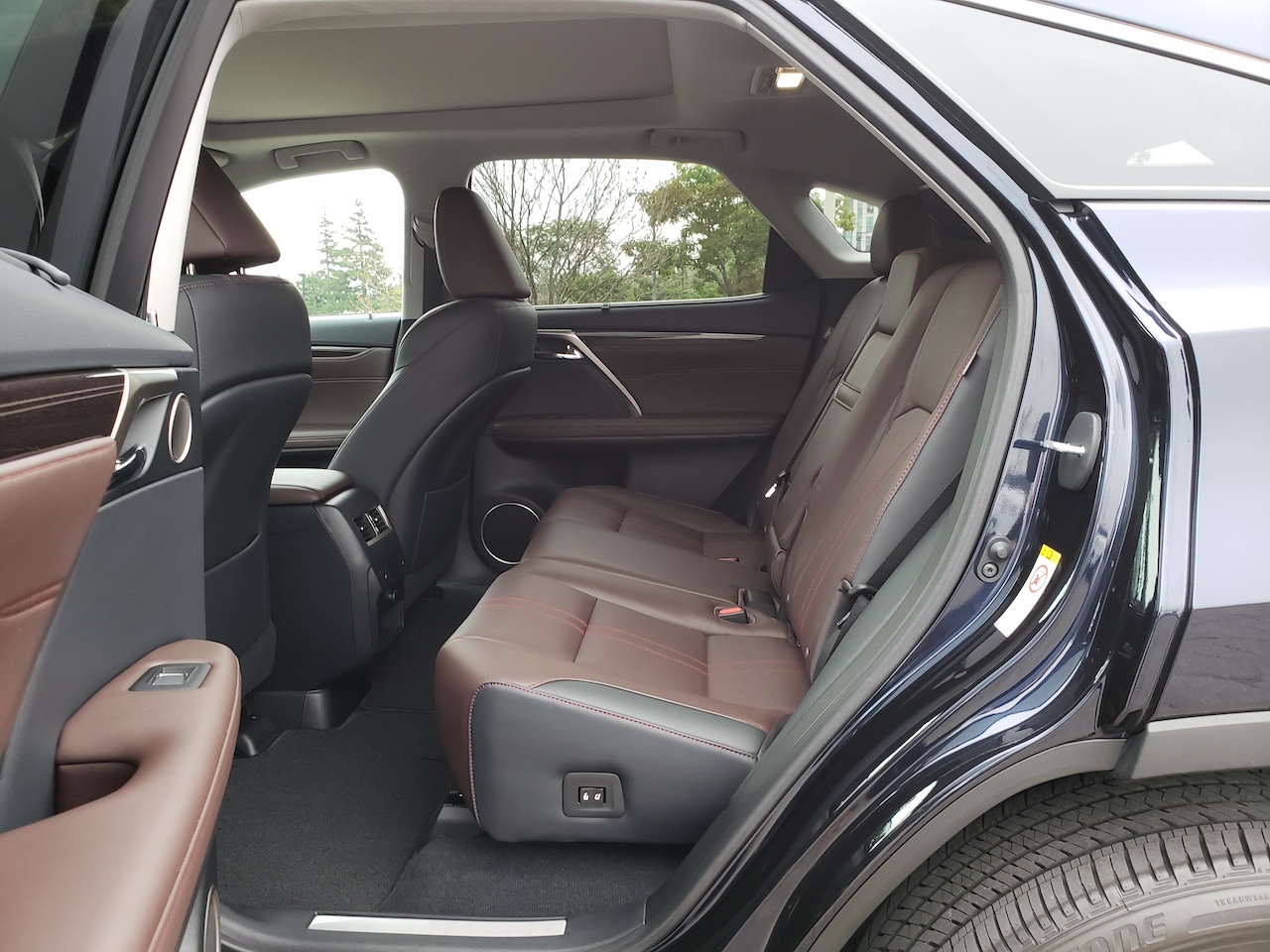 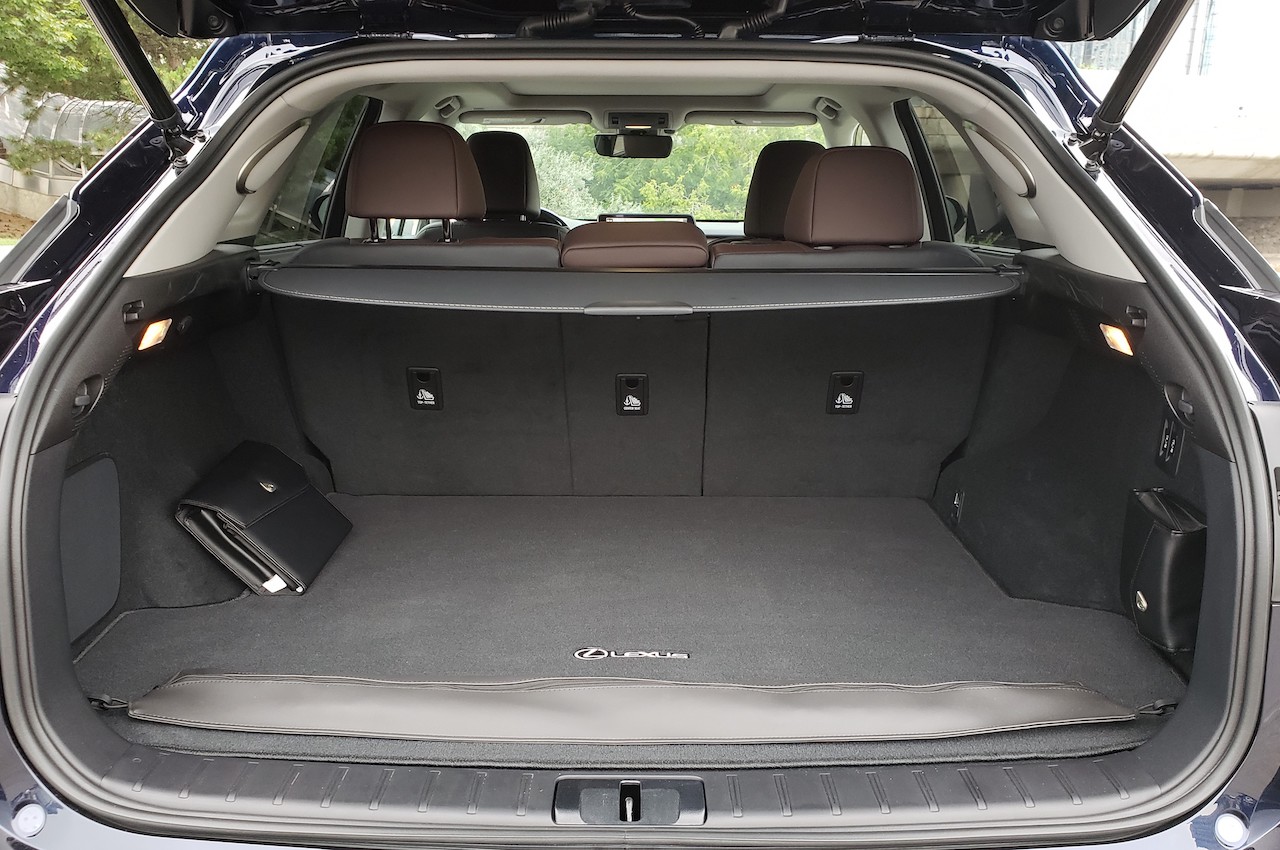 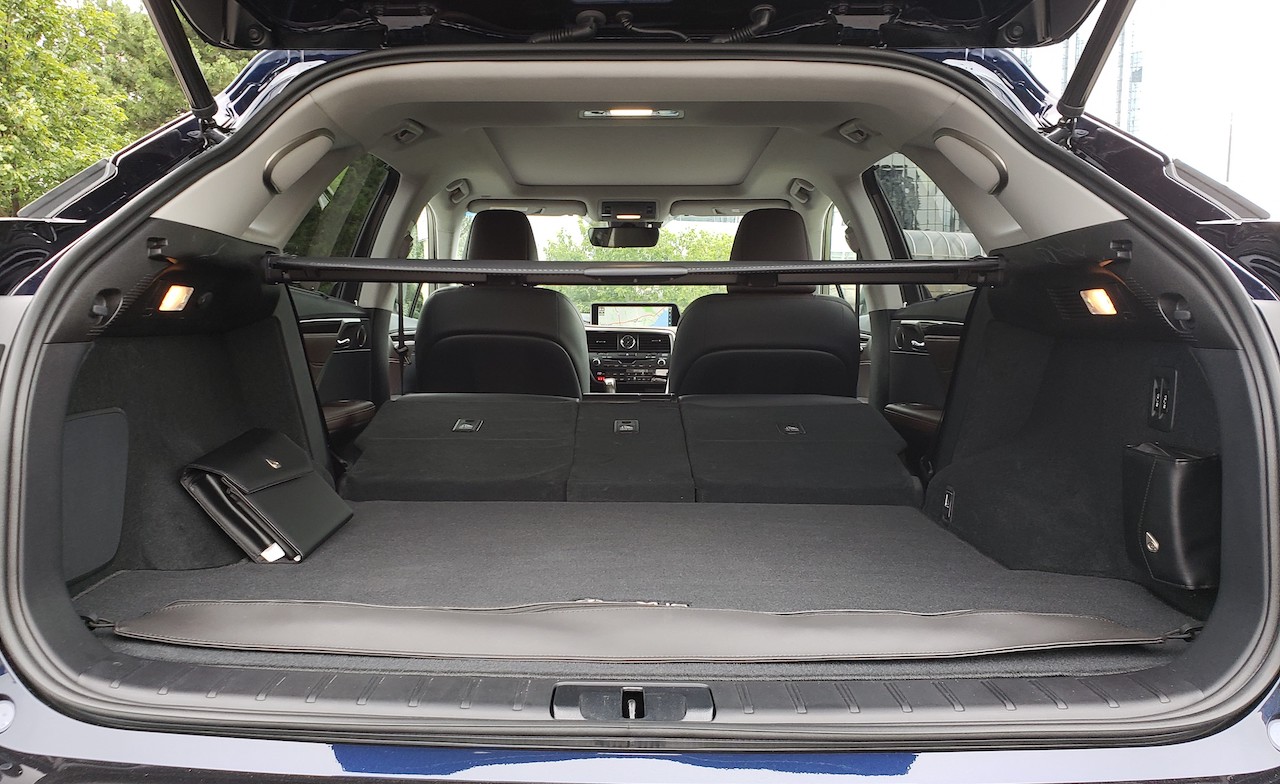 So, about that infotainment: this larger screen is beautiful and is a very welcome addition. But it doesn’t offer much reprieve from the fact that neither Apple CarPlay nor Android Auto is available on the 2019 RX and that the cursor-driven pointer input system is next-to-impossible to use while driving. Both of these points are being fixed in next year’s refresh – yes, including Android Auto, on which Toyota has finally capitulated – so these will be important and most welcome improvements. 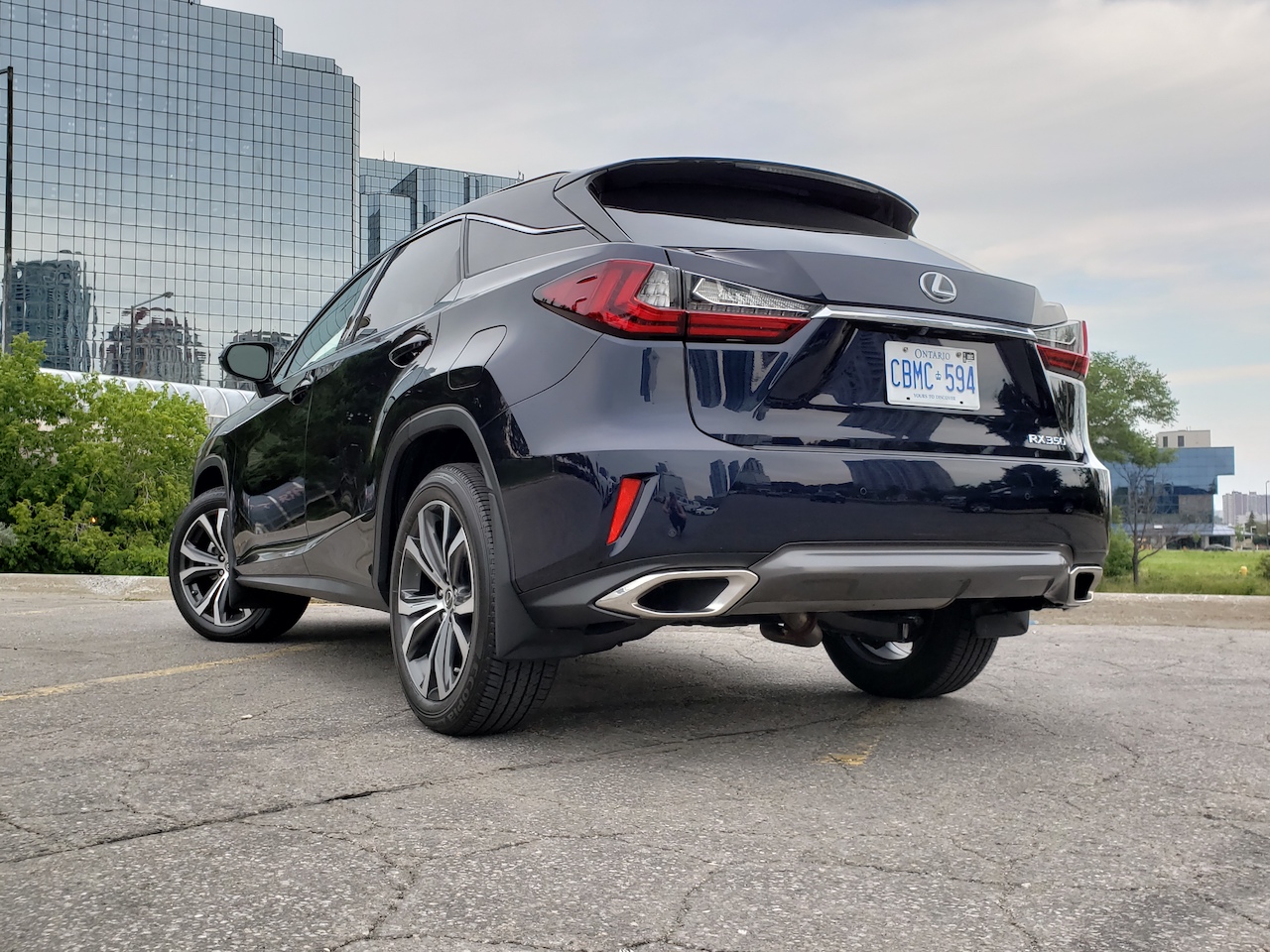 That mid-cycle refresh that’s on the way for 2020 will also include suspension updates to reduce body roll and improve responsiveness along with some styling tweaks, so there’s a good chance that this Ontario-built SUV will be more appealing on the other side of these much-needed upgrades. For now, if concern over fashion is your primary reason for considering a premium brand, I’d lean more toward a Cadillac XT5 or even a Mazda CX-9 Signature than I would this or anything else at the more affordable end of this segment – unless you stumble on a good price and none of this car’s downsides matter as much to you, in which case it makes good sense to keep your money in Canada.