Winter wonderland, or save it for summer?

It’s not exactly a secret that a small, light, open-roof car is some of the most fun you can have on four wheels. When the weather is nice. The problem is that this is Canada. Where that nice weather runs from Victoria Day to Labour Day. If we’re lucky. That’s about four months of warm, unless you’re in Vancouver. What about the rest of the year? Does Mazda’s MX-5 still put a smile on your face when the thermometer hits the negative side of the dial?

It started with one of the worst weather days fall has to offer. Torrential rain, winds of more than 100 km/h, and a temperature of plus two. In the dark. Miserable weather in any vehicle. It seemed like a perfect test for the two-seat sports car.

The MX-5 is a small car, and I’m not a small person. Unless I’m standing next to a group of CFL defensive linemen, then it’s probably a wash. Let’s just say it’s a snug fit for me in the MX-5 and leave it at that. I was worried that the small size would feel claustrophobic in the dark and rain. And that the roof would leak like a bad tent as soon as my head started to brush against it.

I won’t’ say it was all sunshine and rainbows. More like blinding headlights and driving into a pressure washer. You don’t realize just how low this car is until you’re staring into the rainy glare of a set of truck headlights. But it wasn’t any more miserable than it would be in any other car. 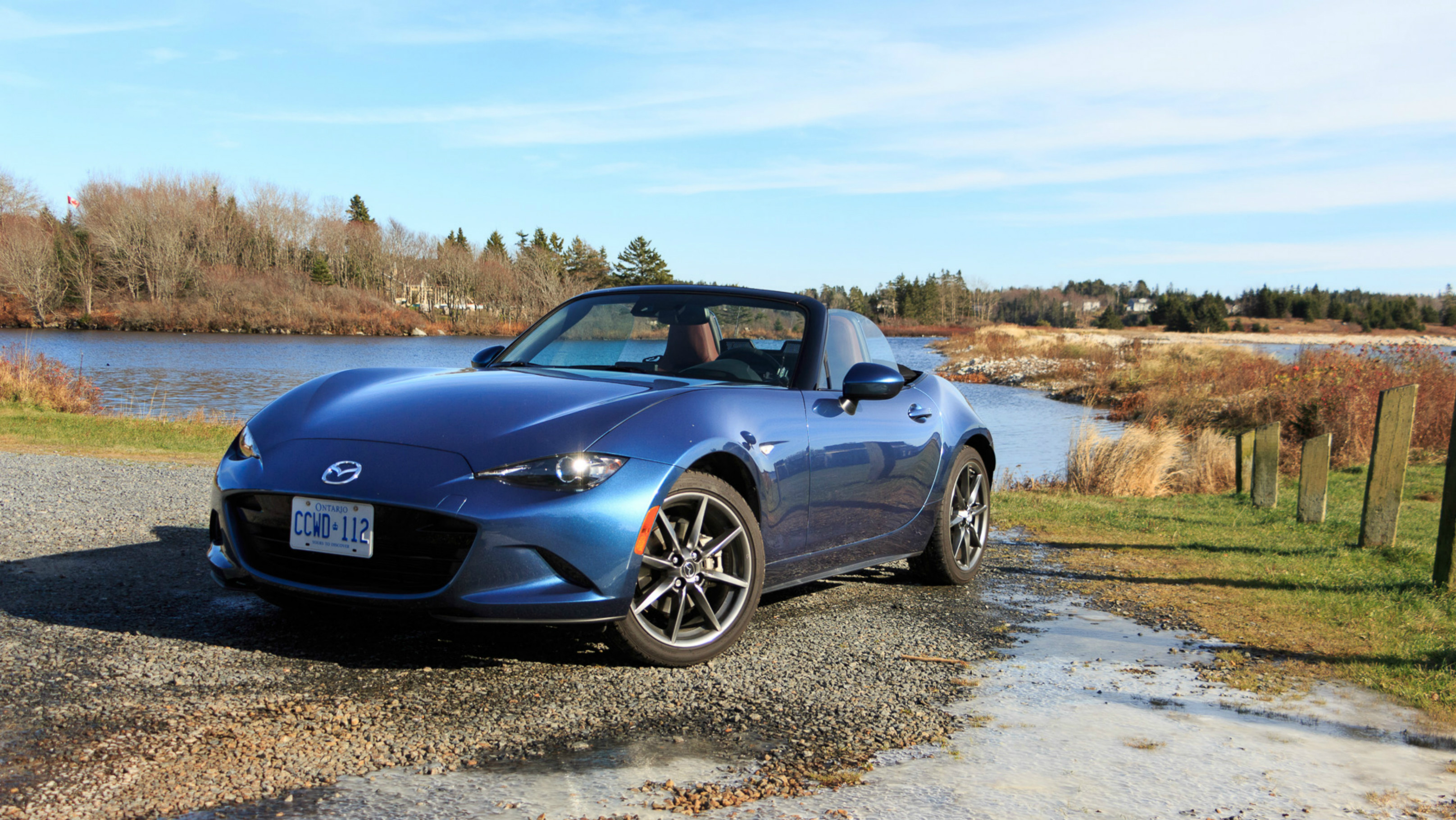 This was as much rainfall as I have seen all year, but not a drop made it into the cabin. I should probably have expected no less, but my rainy convertible experience had previously been limited to older British cars. The ones that this car helped to make obsolete.

Hydroplaning, often a problem in recent sports cars, wasn’t an issue here. Some credit goes to the Bridgestones, but I’ve driven with these tires on other cars and experienced that sudden wet slide. Credit the car’s light weight and tires that are only 205 mm wide. Positively tiny by modern standards, where compacts wear rubber as much as 245 mm wide. But these narrow tires are less prone to hydroplaning.

That wind and rain is a quick way to a fogged-up windshield, especially when you’re breathing almost on top of it. Here, the small cabin and Mazda’s choice of a naturally aspirated engine shows an unexpected benefit.

That engine has seen some significant changes for 2019. It’s been thoroughly worked over, reducing each piston’s weight by 27g, rods by 41g, a new exhaust, and revised intake ports. They’re a series of little changes, but many small changes add up. Power is up 26 hp to 181 and torque up 3 lb-ft to 151. More importantly, power is boosted throughout the rev range, and not just up high. 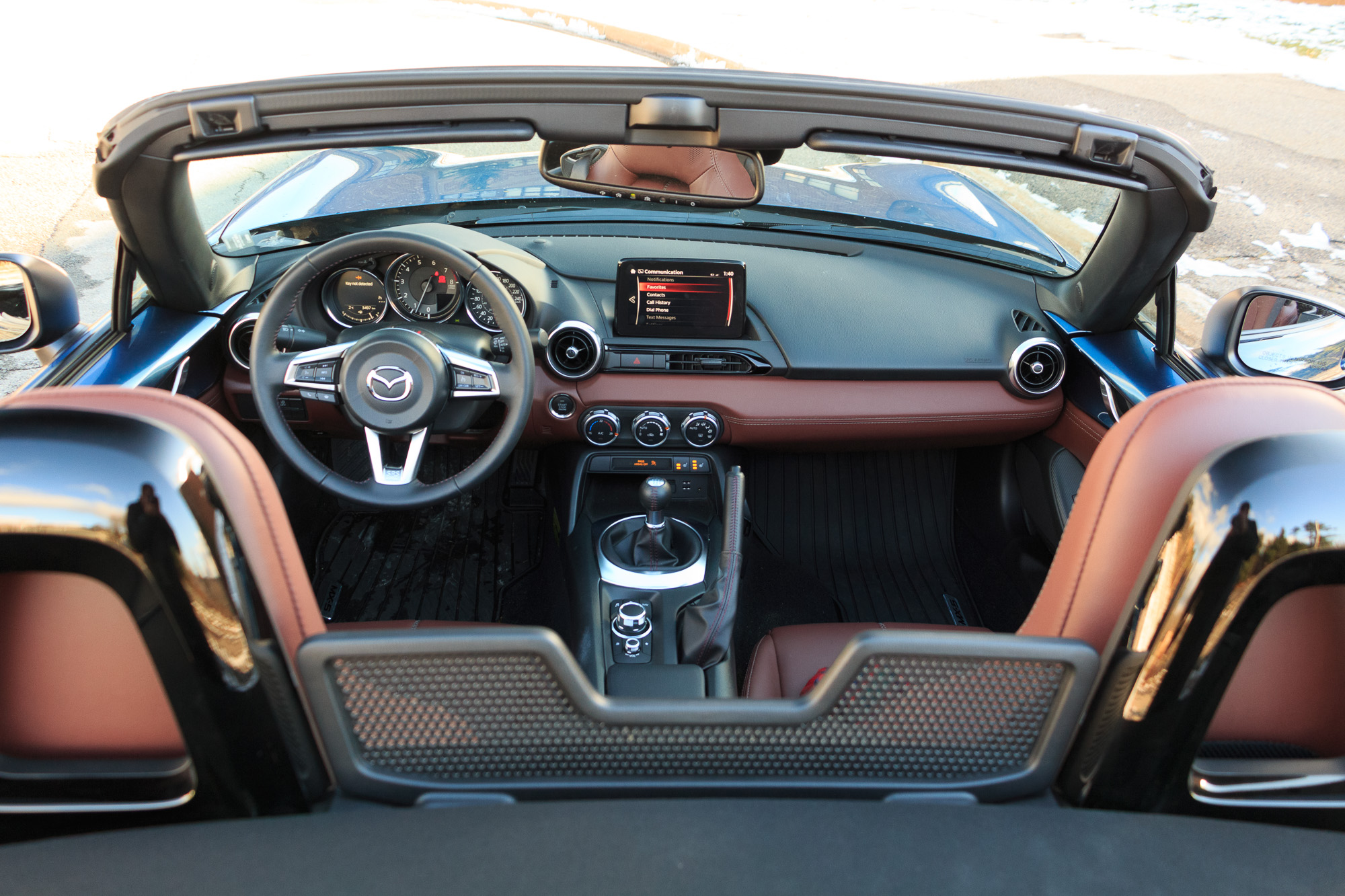 The old engine was far from a slug, but the new engine definitely pulls harder. There’s no surge of revs toward the redline, it just keeps pulling all the way to that red mark on the tach. And where the old engine stopped the fun at 6,800 rpm, this one will run all the way to 7,500.

The side effect of this engine is plenty of heat. My experience with small-displacement turbos is that they’re not great at putting heat into the cabin. At least until they fully warm up, which takes a longer time. This engine was giving me loads of warm air very quickly. The small cabin doesn’t take long to warm, which means the windows defogged quickly.

The next day, the sun came out and the rain dried up. And the temperature dropped to -5°C. Perfect convertible weather, right? Mazda says not to operate the top below +5°C, so I parked the car inside for a couple of hours to warm it up. Then I dropped the roof and headed out for a drive.

I brought along a scarf, gloves, and a hat, but I wanted to start without them and then add clothes. Can I drive this without bundling up? The answer is yes. Top down, 80 km/h back road, -5, and wind buffeting is well controlled. Even with both windows up. It was warm enough in the cabin that I didn’t need to keep the heat turned up all the way. The hat, gloves, and scarf were left on the passenger seat. 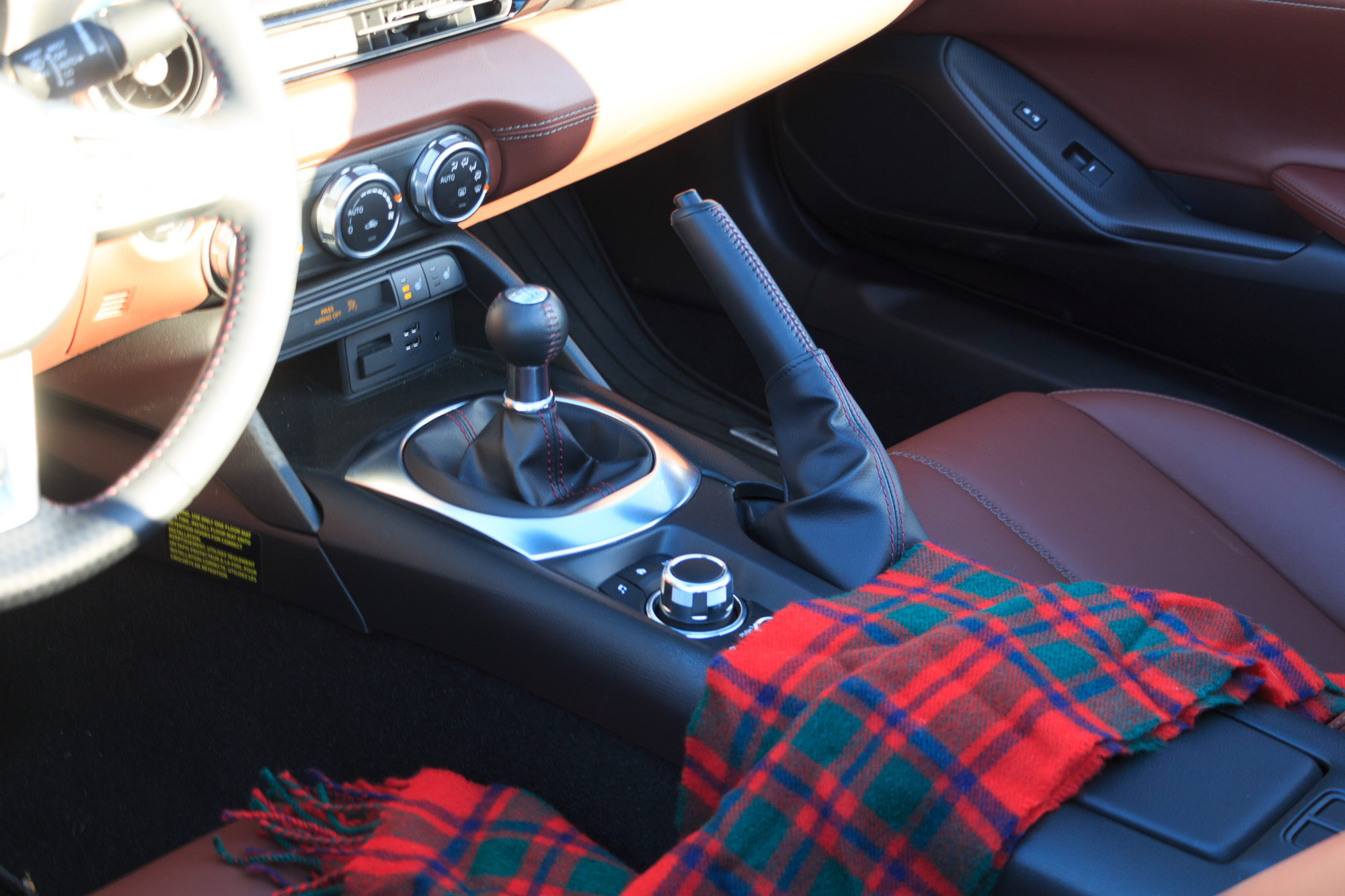 Before this drive, I never understood why motorcyclists would get all bundled up to go for a ride exposed to so much cold air. I still don’t, but they seemed to think I was one of them. I’ve never gotten waves from motorcyclists while in a car before, but this day I did. Thumbs up and smiles. We’re the ones who realize that cold weather doesn’t mean the fun stops.

The next day, the first snowfall of the year. And while I wasn’t putting the top down (the car was too cold), I was definitely going for a drive. The lack of winter tires meant I wasn’t going far, or quickly, but a nip around my daytime-deserted neighbourhood was definitely in the cards.

The Miata’s razor-sharp reflexes were numbed somewhat by the lack of grip, but the steering feel made finding what grip was there easy. The near-telepathic throttle helped keep the wheels at just the right amount of slip.

A rear-drive sports car isn’t exactly the common prescription for winter driving, but the limited-slip differential does wonders to help keep the car moving. On a closed course, it was a breeze to dial up just how much opposite lock I wanted, driving down a straight line with exactly the amount of sideways I wanted. 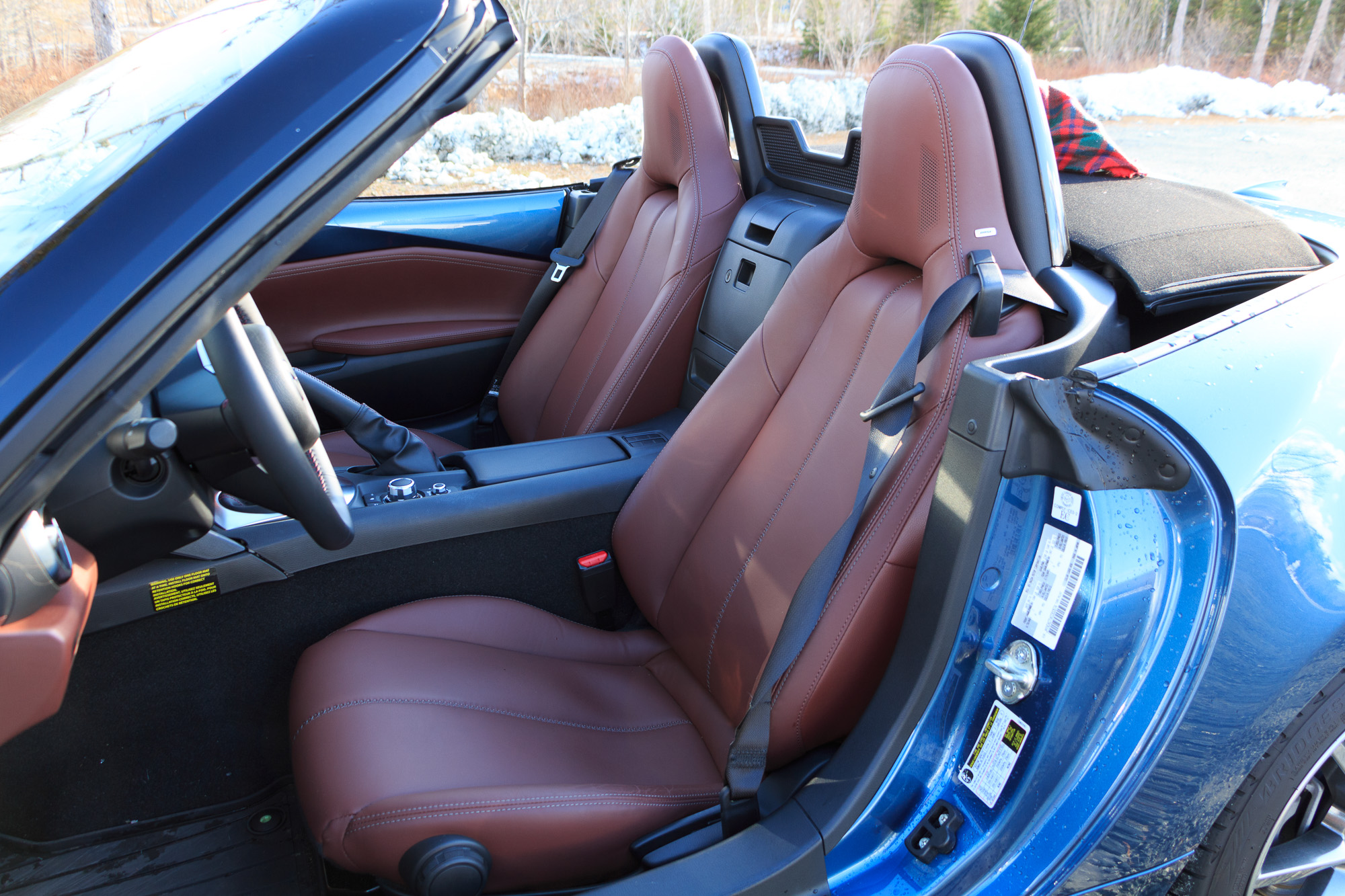 Yes, I got stuck. Of course. The tires were very much summer-only and I knew I was taking a chance. It’s why I didn’t go far or fast. But at least the flyweight MX-5 was easy to push out. Thanks kindly to the gentleman in the Velar who helped give me a shove.

With the right rubber, I daresay this car would be nearly unstoppable, snow or otherwise. It’s never going to be roomy, but it’s comfortable. And Mazda’s added a telescoping wheel to help more drivers get comfortable.

My test car was a GT trim, with the gorgeous Chroma Brown Nappa leather seats. But I would trade them for the GS-P and the optional Sport Package. That car gets Brembo front brakes, and BBS alloys, but more importantly, it gets a set of leather and Alcantara Recaro sport seats. Having driven cars with both, the Recaros are much more heavily bolstered, but still ok for a large driver. More importantly, they’re lower than the other seat options. Giving the driver a touch more headroom.

The MX-5 isn’t the perfect winter car, and I’m not going to try and tell you otherwise. Most drivers aren’t going to want to put the roof down when it’s well below freezing, though it is still comfortable. And not comfortable in the slightly over-enthusiastic “yeah, it’s great!” tone of someone who knows they’ve made a bad decision but refuses to admit it out loud, but actually comfortable. You also can’t put the top up or down in the cold, so if you don’t have a garage you’ll be keeping it up. Or looking for an enclosed parking garage. The RF’s hard-top, though, has no such restriction, so call that one the winter version? 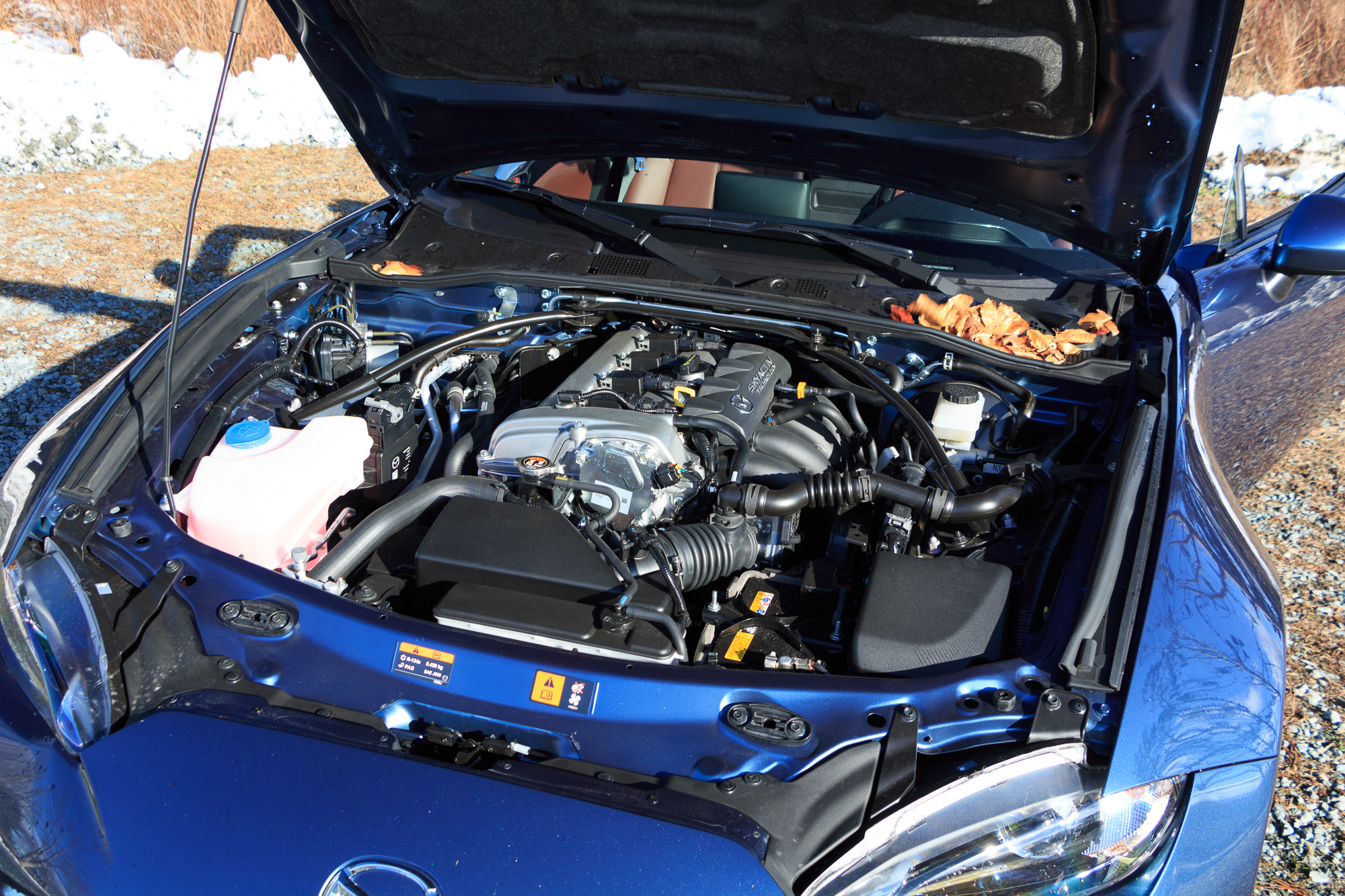 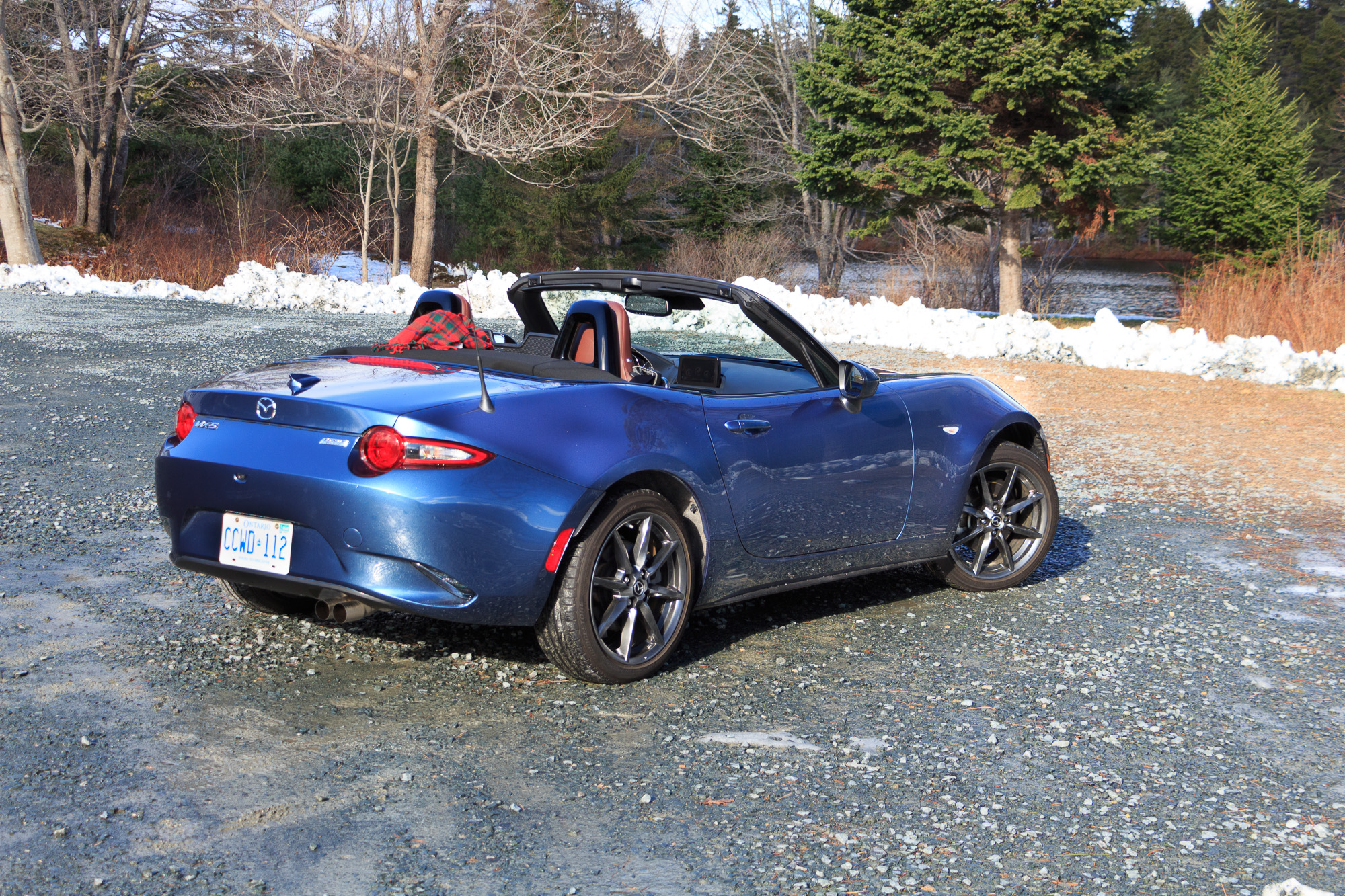 You will be spending more time with the roof up, no matter how devoted you are, and even though there’s a new back-up camera for 2019, this is still a difficult car to reverse when it’s closed thanks to limited visibility.

There’s also the issue of your passengers, who might not be as excited for winter as you are. My wife summed it up well: “I’ll only sit on the floor and forgo cupholders to have the roof down on a sunny day. A WARM sunny day.”

Yes, the MX-5 has cupholders, but they’re removable. They’re also the first victims of the search for more elbow room, getting tossed in the hidden compartments behind the seats.

If you’re willing to brave the cold, Mazda’s MX-5 is as capable and comfortable as any other car. Though after extensive driving with that roof down I’d recommend a good moisturizer for your face. That air is dry this time of year.

You might not always be able to take full advantage, but on the days you can, you’ll be glad you did. Not rain, nor snow, nor gloom of night will keep you from your appointed rounds.