Among Nissan nameplates few have endured like the mid-size Maxima. Its continuous production is one of the longest in company history. It’s now an elder sedan in a family full of young SUVs.

I say the Maxima is an elder because when it debuted it was known as a Datsun. That’s right, the first-gen model was badged as a Datsun Maxima when it went on sale in 1980 as a high-end variant of the second generation Datsun 810. The Nissan badge didn’t start appearing on the Maxima until the 1984 model year at the end of the first-gen lifecycle.

I remember those boxy Maximas well as they coincided with my early fascination with cars, but the third-gen model (1989-94) was the one that really captured my imagination. Powered by Nissan’s 3.0-litre V6, the sporty SE model put out 190 horsepower which was impressive for a family sedan in 1991.

My teenage self thought the Maxima was cool, an impression that was further enhanced by the cheeky TV ads Nissan was pumping out for it back in those days. Let’s just say the ‘four-door sports car’ moniker the company attached to the Maxima goes back a long way.

Fast-forwarding to the present, the current eighth-gen Maxima receives a mid-cycle refresh for 2019, its biggest update since going on sale in 2015. Among the changes are new front and rear fascias, V-Motion grille, LED headlights, redesigned taillights, new 19-inch wheels and a new exterior finish called sunset drift (think burnt orange). The cabin has also been fitted with upgraded trim materials which, depending on grade, covers items such as the instrument panel, door panels, steering wheel insert, seat materials, headliner, pillars and A-pillar speaker grilles. 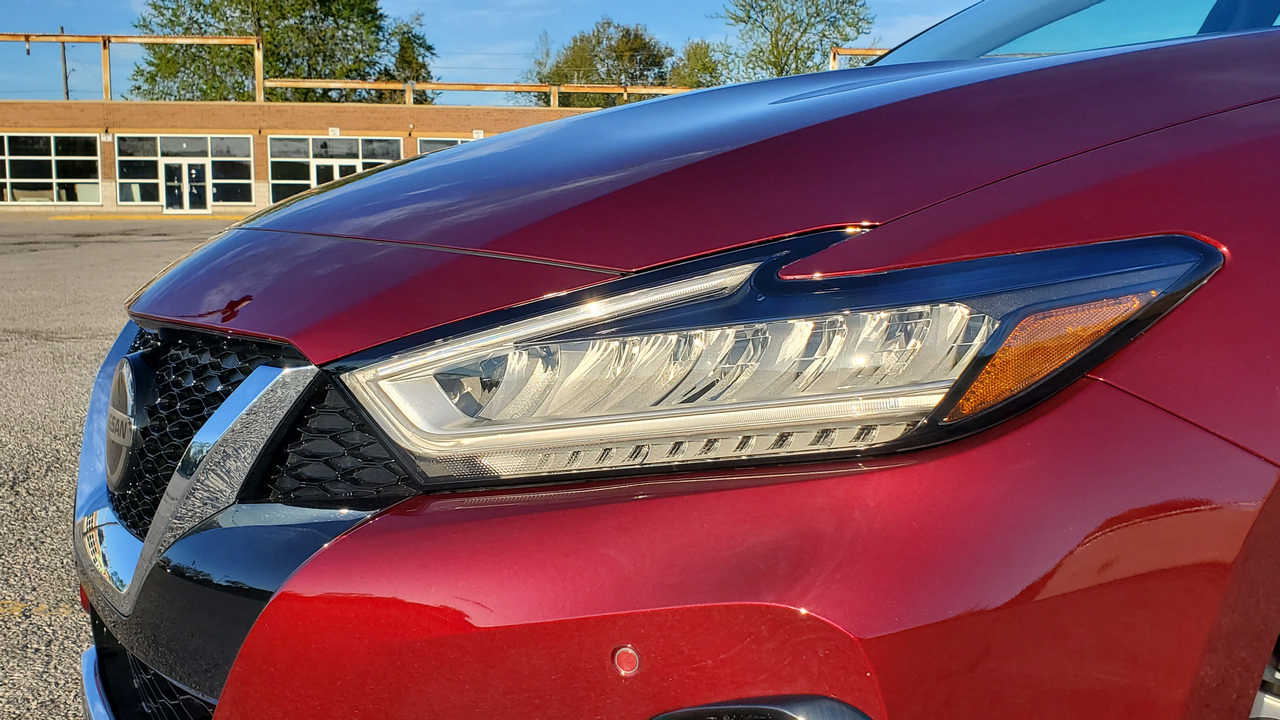 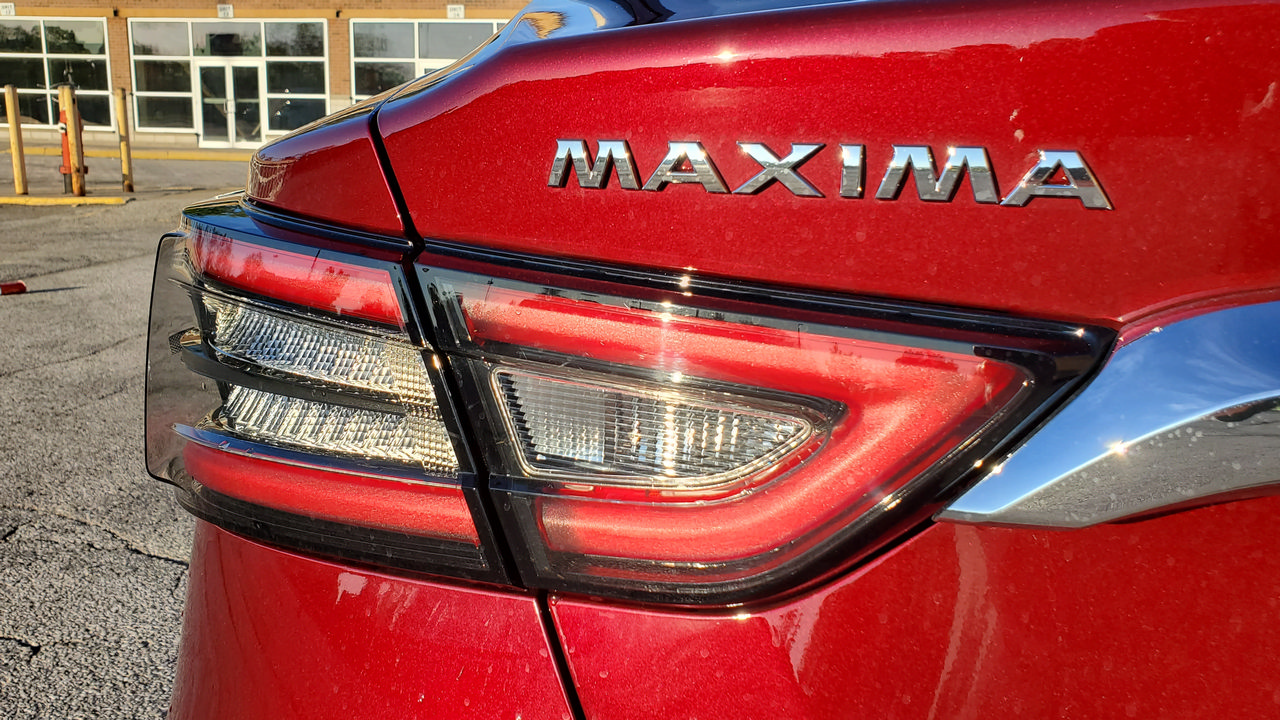 Speaking of grades, there are just three for the Canada, which is almost certainly due to the shrinking market not only for the Maxima, but for all cars, especially mid-size sedans. For the sake of comparison, there are six Maxima trims sold in the U.S. but the market for mid-size sedans is much larger there.

At any rate, the Maxima is available in SL, SR and Platinum grades, and come well-equipped. One powertrain drives all three: a 3.5-litre V6 (300 hp / 261 lb-ft.) paired with a CVT that drives the front wheels.

The Platinum model Nissan Canada furnished me with as a test vehicle is finished in a beautiful deep burgundy red known as Carnelian red and is fully loaded. Standard kit includes 19-inch aluminum alloy wheels, premium ascot leather seats, heated and cooled front seats, heated rear seats, Intelligent Around View Monitor, navigation, and a lot more. In fact, its standard equipment list is so long the only option it comes with is the Carnelian red paint ($300).

The Maxima is one of the most heavily styled sedans I’ve ever driven. It certainly stands out within its segment, which includes the Acura TLX, Kia Stinger, and Toyota Avalon. Its exterior is covered in interesting shapes and contours, with lines that flow into and out of one another. Whereas beltlines on sedans are often flat and offer little dimension, the Maxima’s lines run wide and deep to create curves that give the car a commanding presence. The Maxima is already on the large end of mid-size, but its broad shoulders and haunches make for an even more robust stance – this car isn’t for blending in.

The jewel-like LED headlights and arrowhead-style taillights provide a lighting signature that is both handsome and distinctive, while the quad exhaust outlets and 19-inch alloy wheels help the Maxima punch up at luxury nameplates. The V-Motion grille has been redesigned for more depth, and while I’m not the biggest fan of the same face being slapped onto an entire lineup, I think Nissan has done a good job of separating the Maxima from its other cars in this regard. Yeah, it’s a Nissan, but you wouldn’t mistake it for an Altima.

As for the interior, the Maxima is what one would expect for a sedan that nips at the heels of luxury marques. Its cabin is comfortable, quiet and filled with just about every bell and whistle one could ask for. There’s nothing remarkable about the trim materials themselves, but the plastics and leathers are varied and feel good to the touch. Bottom line, it’s a handsome cabin that looks good, is logically designed and has plenty of room. 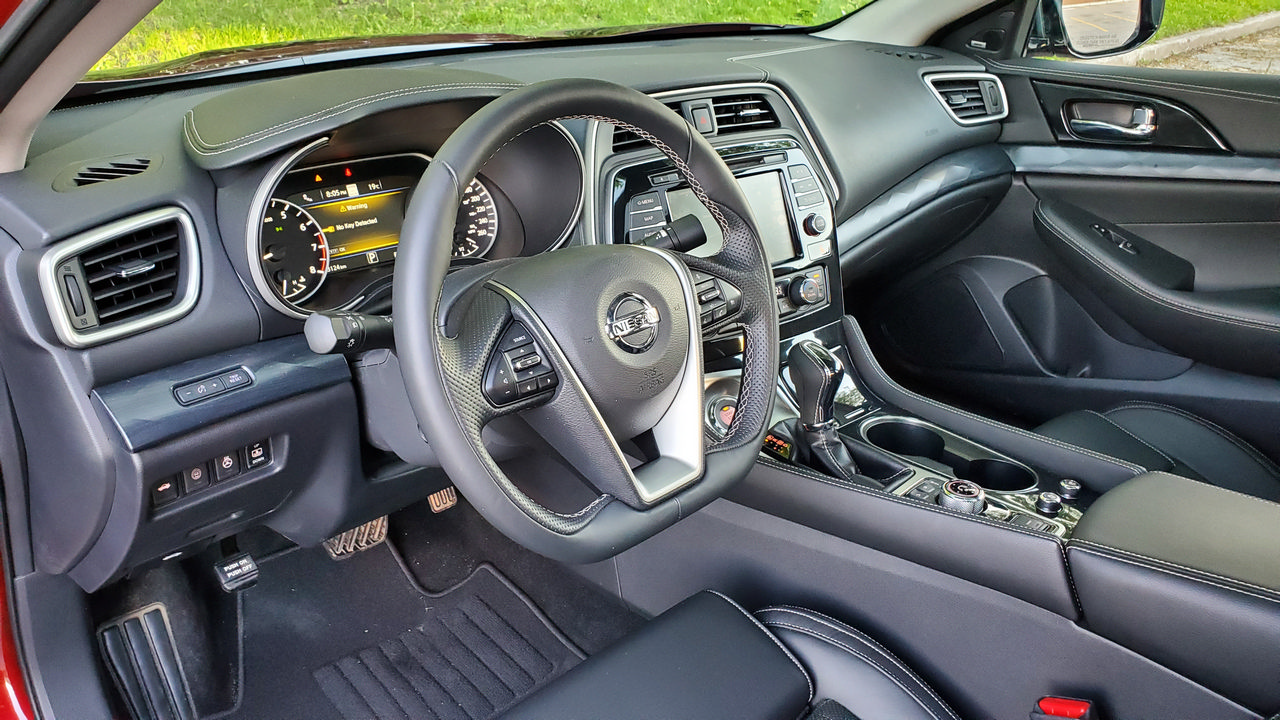 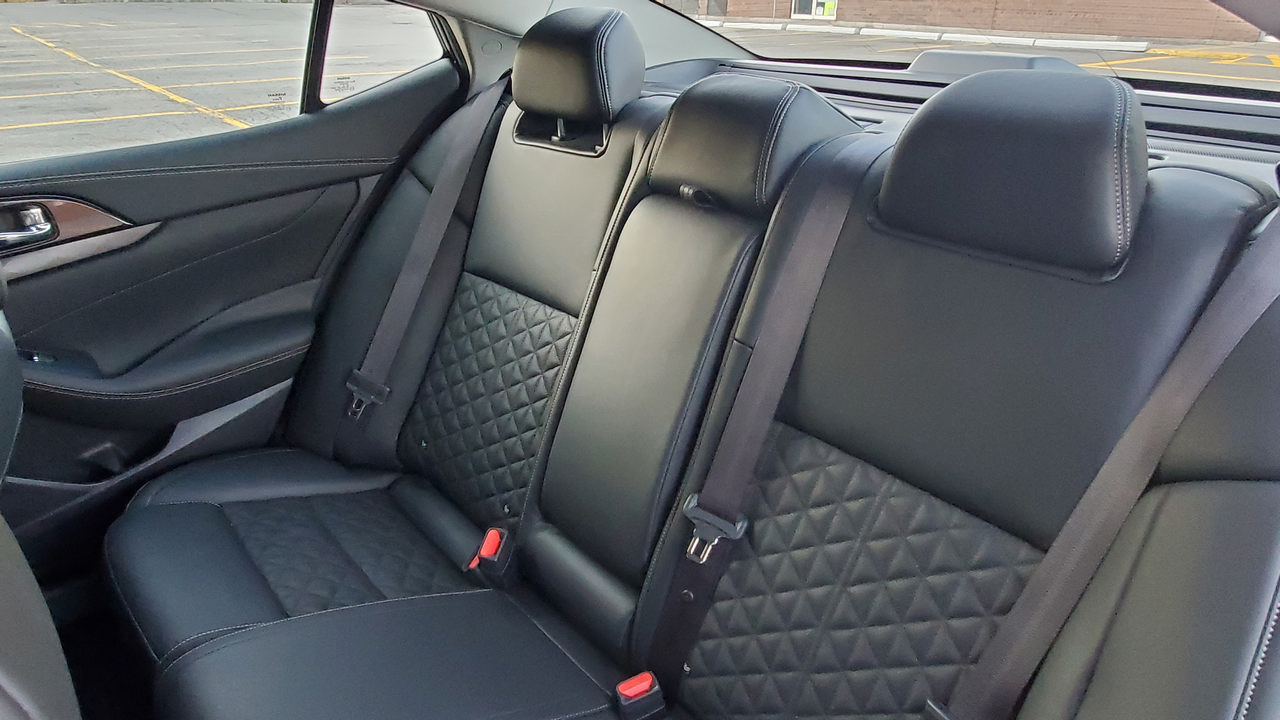 On the road, the Maxima offers impressive acceleration from its 3.5-litre V6 with handling that belies its long proportions. Ride quality is comfortable and composed, and the MacPherson strut / independent link suspension set-up soaks up most road imperfections well. The V6’s peak power output is high in the rev range, but there’s enough available at the lower end to hustle the Maxima quickly off the line. A console-mounted sport mode button bumps the revs and sharpens throttle response even further, and a manual mode allows the driver to ‘shift’ the CVT as they wish. Paddle shifters aren’t available on Platinum models, but they’re standard on the sportier SR.

Overall, the Maxima impresses. It delivers a compelling package of style, power and standard equipment that delivers solid value. It stacks up well versus others in the segment although it isn’t the most powerful, nor is it available with all-wheel drive. It also wasn’t particularly efficient during my test drive, although I concede fuel economy can vary widely depending on several factors.

How important these minuses are will depend on the varying needs and wants of buyers, but for me they don’t diminish the Maxima’s appeal. As nameplates go, this one has aged quite well.