It’s hard to imagine Acura existing without its two bread-and-butter vehicles, the MDX and RDX. They make up the lion’s share of the brand’s sales with the smaller RDX just barely eclipsing the MDX at the top of the heap for 2020.

The fact that the RDX got a bold new design for the 2019 model year has something to do with it, as does the fact that it competes in a busier segment. Still, though, the MDX has always been a very good and capable SUV but the last update it received was a facelift back in 2017. With a new model on the horizon for 2021, where do we stand with the current offering?

Stylistically, the MDX (seen here in $59,790 Tech Plus trim) is a strange mix in that when seen from the front, it’s modern-looking enough with its edgy blacked-out grille, multi-bulb headlamp lenses and the vertically stacked fog lights below.

As you start to move down the side and ‘round back, though, things get a little tamer. Big, slabby panels and a neutral stance are the orders of the day, and the details that are on-hand to make it look more futuristic – the wildly-shaped door handles, for example – seem a little out of place. The design is classy and inoffensive enough, but it lacks coherence and it’s not why I’d be buying an MDX. 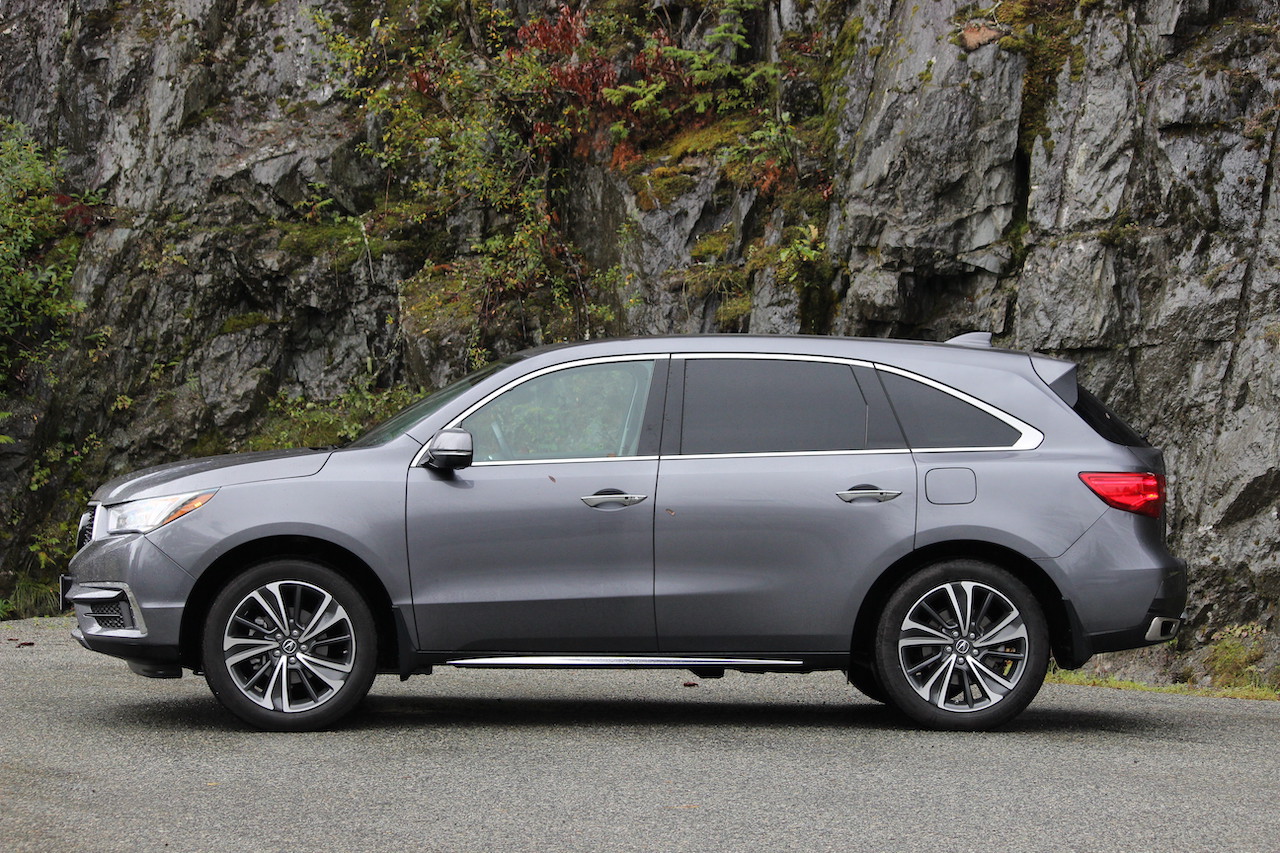 Inside, while the design hasn’t changed much over the years, it has aged rather well. The MDX had dual display screens long before the likes of Land Rover and Jaguar were doing so in their vehicles, and it continues to work here. The upper display is where you find a trip computer, backup camera and navigation map, while the lower display contains climate and audio menus.

The upper display is also where the Android Auto and Apple CarPlay apps are displayed. That’s fine, but it seems like a bit of a retrofit because it’s controlled by a single knob at the base of the centre stack as opposed to being a touch interface. It’s unnatural to operate CarPlay this way and you have to think that displaying device mirroring on the lower touch display would have made more sense. The required CarPlay/Android Auto Device, meanwhile, can plug in to four USB ports in the cabin – two in the front, two in the second row, none in the third row. A huge problem? No, but the next MDX should have something back there as more and more of the competition continues to do so.

The sound system is a good one – my MDX Tech Plus tester gets 11 speakers, while other models get eight, 10 or 12 – as well as a rear seat entertainment system. The rich audio quality here made me want to crank up the volume and had me wondering how necessary the 20-plus speaker systems found in so many luxury vehicles today really are.

Large, flared surfaces abound throughout the cockpit and they help it feel spacious and airy. Legroom and hip room in the first two rows measure a generous 1,051/1,461 mm and 929/1,469 mm respectively. At 969 mm up front, 973 mm in the middle row and 904 mm in the third row, meanwhile, the headroom is good thanks to the MDX’s tall roof. 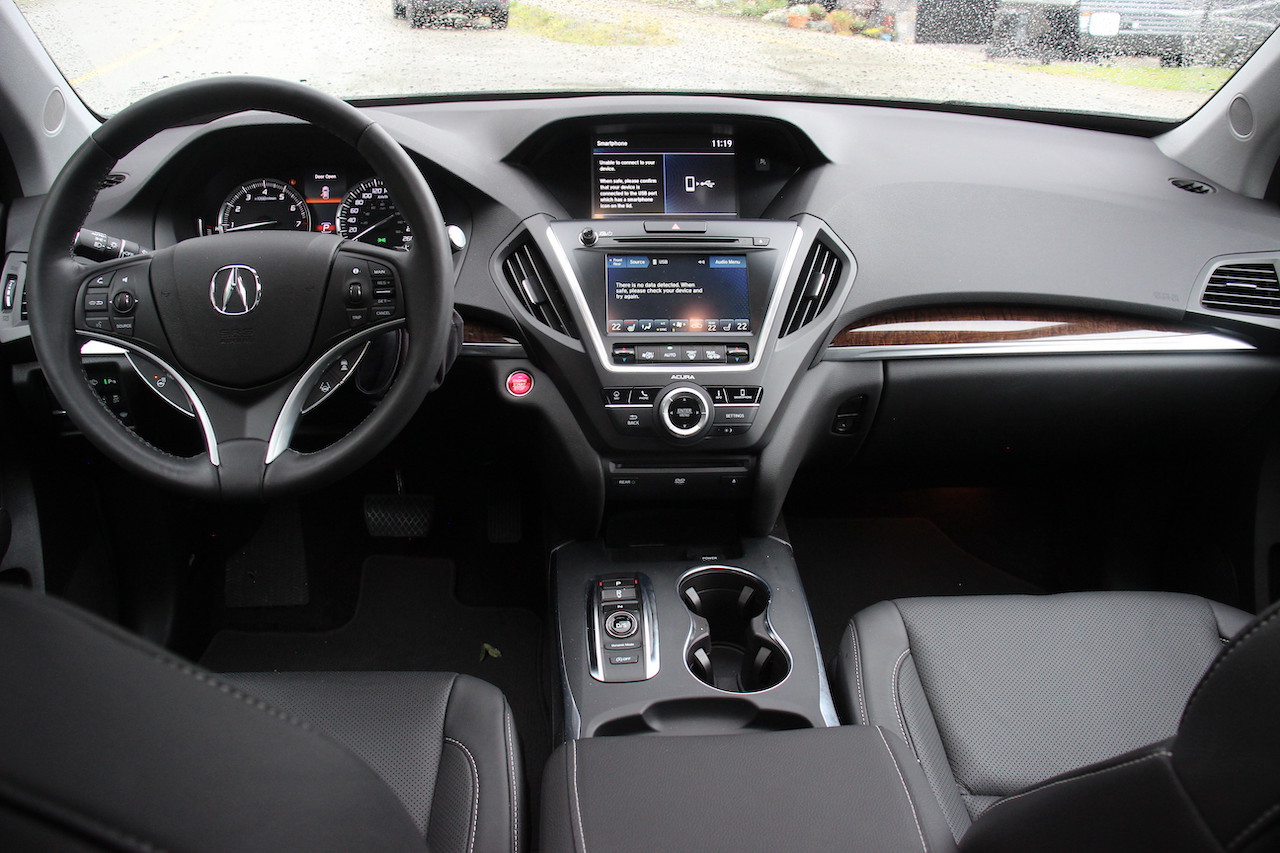 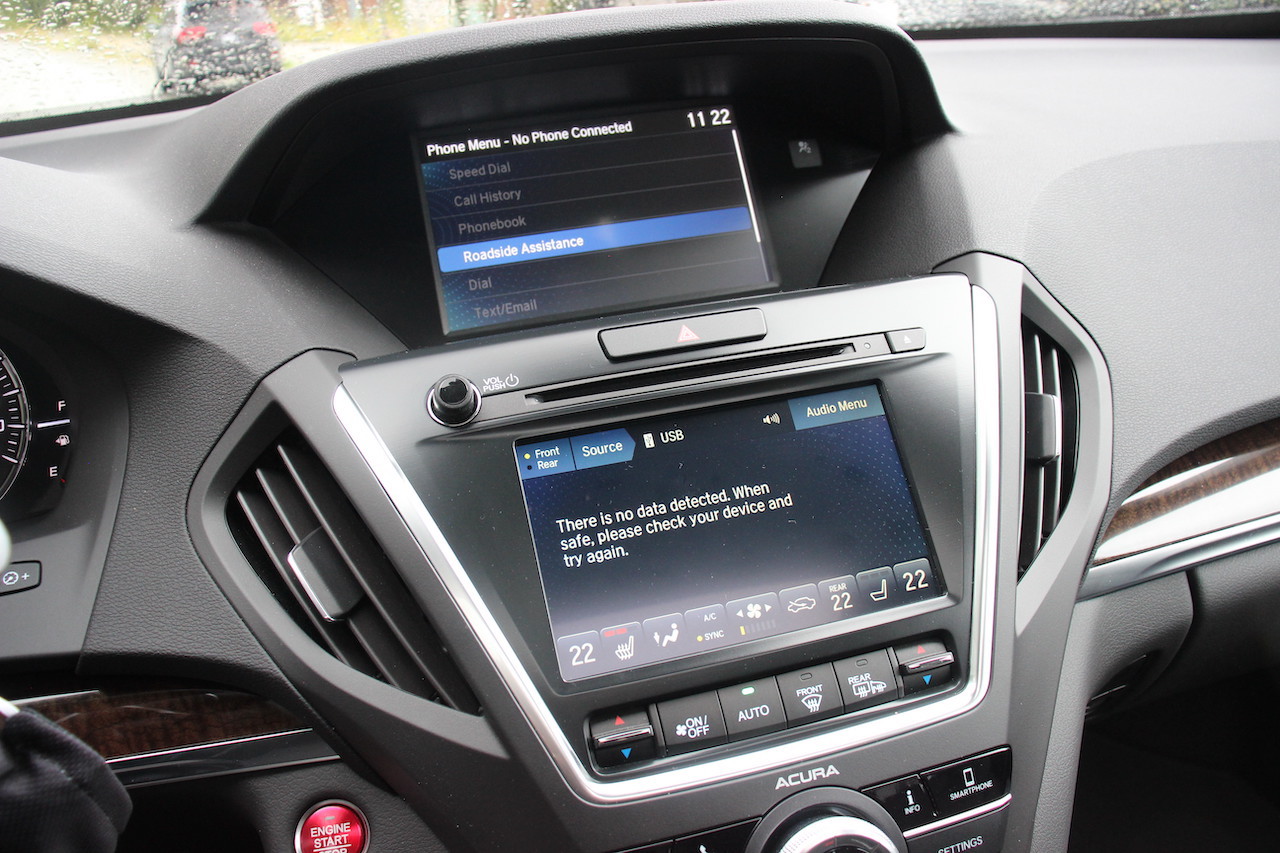 The seats themselves appear big and cushy, but I found them just a little on the firm side, especially around the tailbone. I didn’t have the same sensation while sat in the second-row bench seat, which felt better padded. Even the third-row seats felt good, but since the MDX is available only with second-row bench seating in Canada, the only way to access them is by squeezing between the door pillar and second-row seatback. The seats slide easily forward but they don’t tilt at the same time meaning you can’t really leave a child’s seat in there if you want easy access to the rear seat.

No matter which of the five non-hybrid MDX trims you select, the power’s always going to be the same: 290 horsepower and 267 lb-ft of torque from a 3.5-litre V6 engine with i-VTEC variable valve timing. The power is fed through a nine-speed button-activated automatic transmission to all four wheels through Super-Handling All-Wheel Drive, which is a full-time AWD system. Power can be sent to either axle depending on what the situation dictates, and up to 100 per cent of rear axle power can be sent to either wheel to assist in cornering.

The result is a big SUV that handles much better than it should. Turn-in response is immediate and the steering is weighted just so as to not force constant adjustments when on straight highway stretches or when going through the turns on the way up to the mountains. You get the sense that most owners aren’t going to take their MDX even to seven-tenths of what it’s capable of in the handling sense.

The mirage of not being sat in a big, heavy SUV is dampened, however, as you begin to accelerate out of one of those mountain curves or when trying to join the highway as the MDX feels like it could use more oomph here. The transmission is responsive, though, and the paddle shifters it gets are actually pretty fun to use. 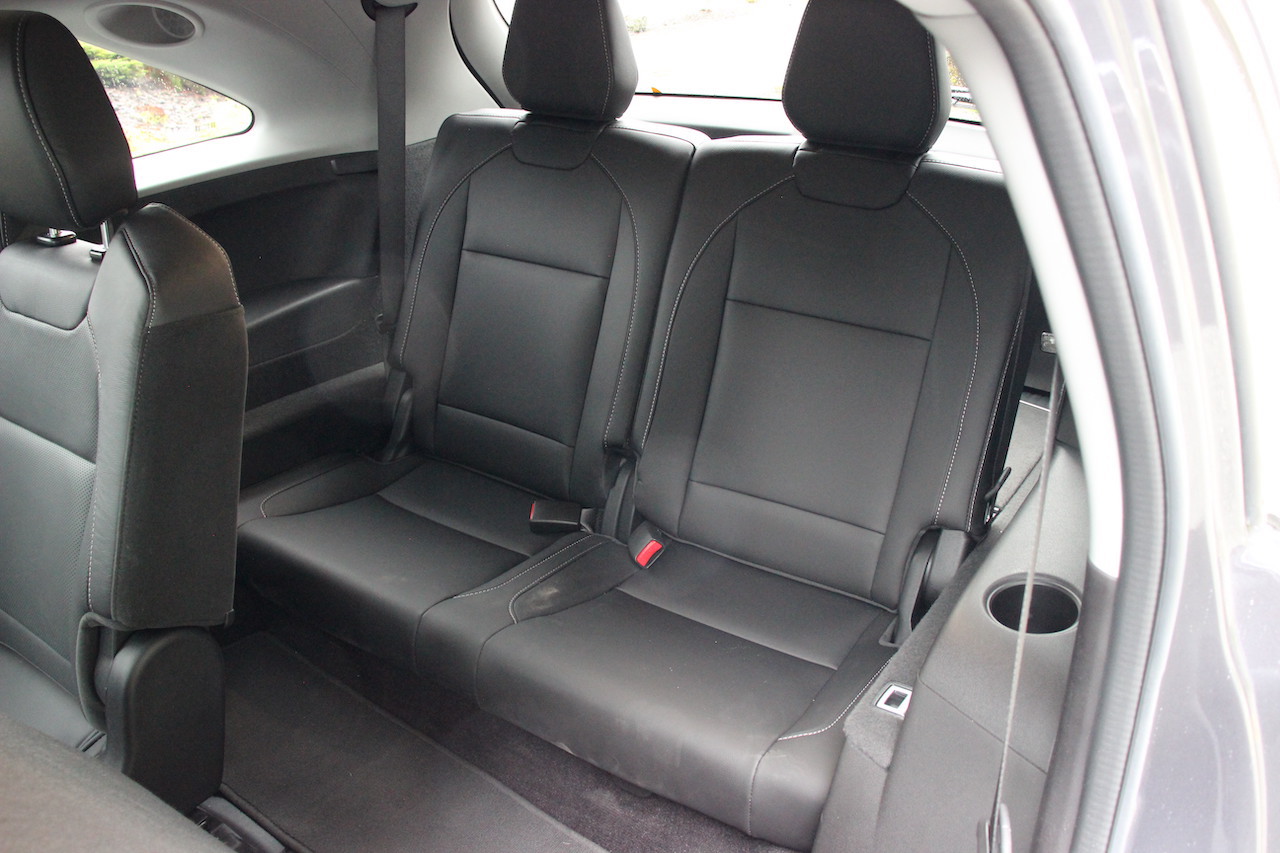 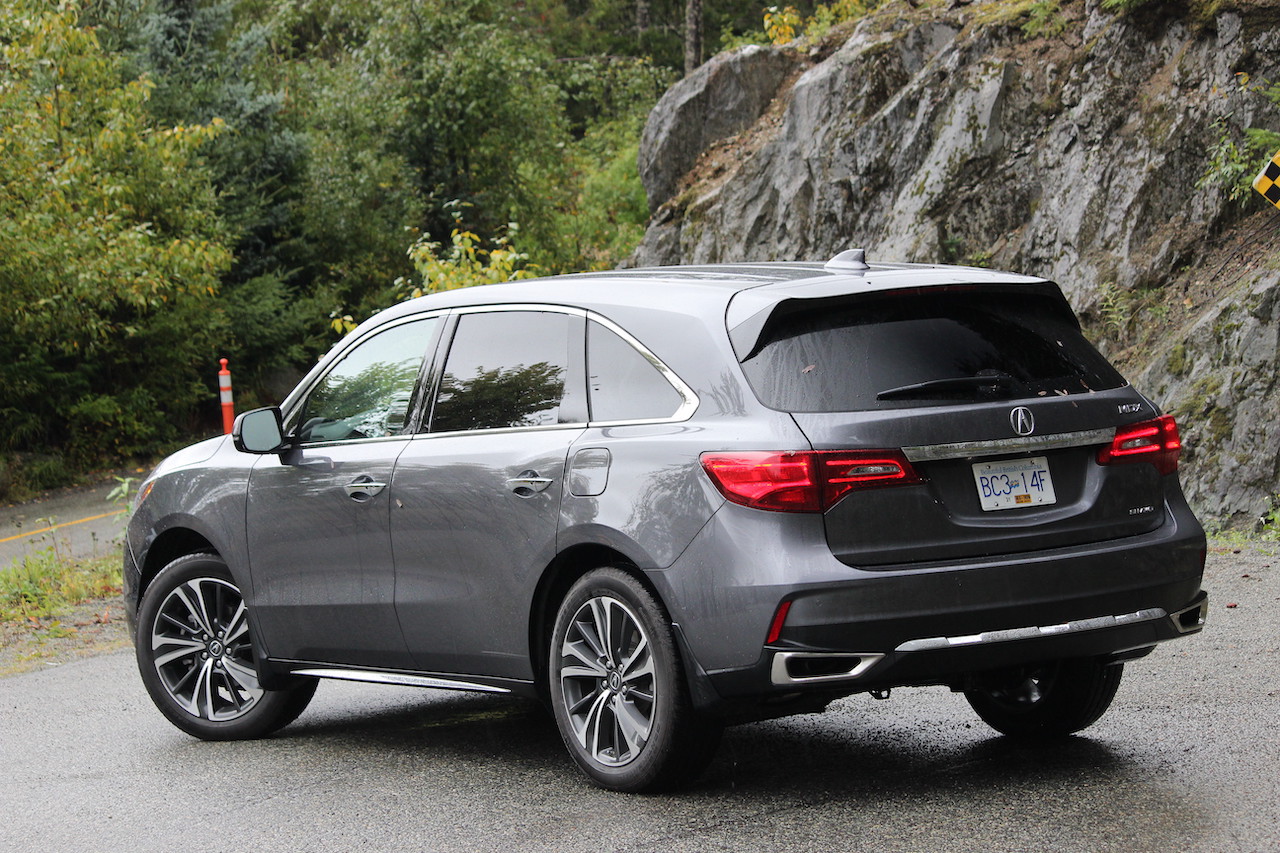 Thing is, the MDX in Tech Plus form isn’t really supposed to be a performance SUV; if power is what you’re after, there are plenty of other places to look, including the Sport Hybrid version of the MDX. Indeed, when it comes to the MDX Tech Plus, the goal is to provide a vehicle with good features, a luxurious environs and a powertrain that will ably do both day-to-day work and provide the performance you need for highway competency. The MDX Tech Plus does all that, and with a sub-60 thousand-dollar base MSRP, does it for the right price, too. Yes, it’s getting a little long in the tooth, but you are absolutely getting what you pay for.