It has its quirks. But it's fast, handles beautifully and is gorgeous inside and out.

Alfa (“Anonima Lombarda Fabbrica Automobili”, roughly, “Car Manufacturer of Lombardy Incorporated”) was founded in 1910, and came under the control of Nicola Romeo in 1915. A dozen years later he was gone, but his name continues in an organization that has since operated under a zillion different corporate structures. It’s also where Enzo Ferrari got his start.

It has produced some world-class race cars and some of the most beautiful road cars ever built. The company is now part of the Fiat Chrysler Alfa Romeo (FCA) conglomerate.

This generation of the compact Giulia sedan, launched in 2016, was conceived with the possibility of four-wheel drive. But the range-topping Quadrifoglio (Italian for “four-leaf clover”, Alfa’s historic symbol) is rear drive, as you may have guessed from the last three letters of its formal name. Lesser Giulias start in the mid-40s. Base list on this one is a healthy $90,495.

Just about every option box on the order form was checked. The most expensive, most impressive option, the Brembo carbon ceramic brakes, add eight grand. The total came to $109,435, right in the pricey ballpark of BMW M3 and Mercedes C-Class AMG.

The car is stunningly beautiful from any angle, inside and out. Bit of a shame that the paint hides the carbon fibre roof and hood panels. Losing weight high in the car like this is doubly beneficial, because the lower centre of gravity aids handling. Much of the suspension is light alloy, so the car’s weight 1,733 kg (3,820 lb), 90 kg (198 lb) more than the four-wheel drive four cylinder models, was a bit of a surprise.

Under light loads, three of the cylinders will be deactivated to save a few drops of fuel. 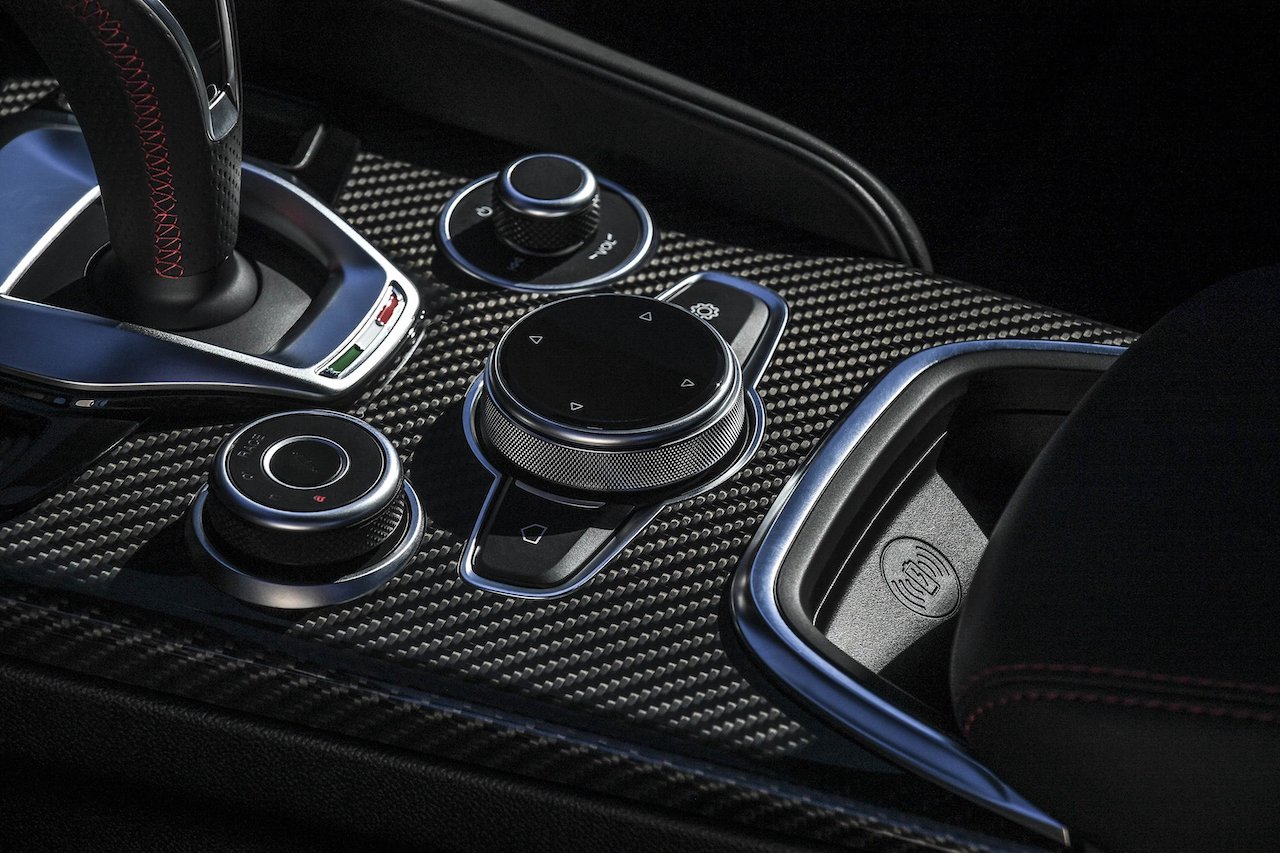 The eight-speed ZF automatic, the only transmission available, shifted well when left to its own devices. If you think you can do better, you can slide the lever to the left, then back to upshift and forward to downshift. This is the only logical way to do this; many car makers don’t seem to understand the physics of weight transfer when you are accelerating and decelerating.

Your other shifting option is perhaps the biggest steering wheel paddles in the industry, lovely light alloy pieces fixed to the steering column so they do not rotate with the wheel. I never have come to a firm conclusion about which way is better, and I guess neither have the car companies, because you do see both in various cars.

The engine is connected to the rear wheels via a carbon fibre drive shaft, whose light weight improves throttle response. That said, it didn’t always seem to react to the throttle in a linear fashion. Sometimes it was all-hell-breaking-loose, other times it seemed to pause for a split second before unleashing those horses.

As in lesser Giulias, a knob at the 8 o’clock position of the steering wheel allows a choice of four driving modes. D (Dynamic), N (Normal) and A (Advanced efficiency) set various mechanical systems to react to suit the chosen mood. Sportier settings also increase the near-operatic exhaust note. The Quadrifoglio adds a fourth setting, RACE. This sharpens everything even more, and also shuts off the Directional Stability Control system. It can be reactivated, and should be for anything but track work.

Even I found this setting a bit harsh for the road, so I left it in Dynamic most of the time, switching to Normal in town or in heavy traffic. A trick torque vectoring differential can send up to 100 per cent of available torque to either rear wheel, for lurid power slides. Huge fun, if not exactly socially responsible.

Going fast is one thing; stopping fast is another. The big Brembos more than do the job. It takes some facility with your left foot to avoid harsh backlash when coming to a full stop. Easing up on the pedal just as you come to rest will save your passengers from annoying whipsawing. Another quirk in this car was the steering. On initial turn-in, it felt a shade artificial. Still, it’s quick and responsive.

Ride quality is definitely on the firm side. This is a sports sedan after all. The stiff sidewalls in the run-flat tires don’t help here. As always, I’d buy a set of real tires – i.e., non-run-flats – on my way home from the dealership. When you first get into this car, you don’t think sports sedan, you think luxury car. Fit and finish have not always been Italian car strengths, but this is gorgeous, with real tree wood and carbon fibre everywhere.

The dash is one continuous sweep across the car, with round vents on either end, rectangular vents in the middle, tach on the left, speedo on the right, and multi-programmable gauges in the middle. Earlier versions of this Giulia had a less than spectacular central control screen. In one generational upgrade, it now has one of the best. It is clear, bright and easily readable in any ambient light. Proper round knobs control interior temperature and fan speed. USB connectors and a 12-volt volt outlet support your electronics, and there are two nice big cup holders. A twist-then-push knob in the centre console enables access to a host of functions. Unlike all touch-screen systems, you can actually work this without taking a time out from the driving task. 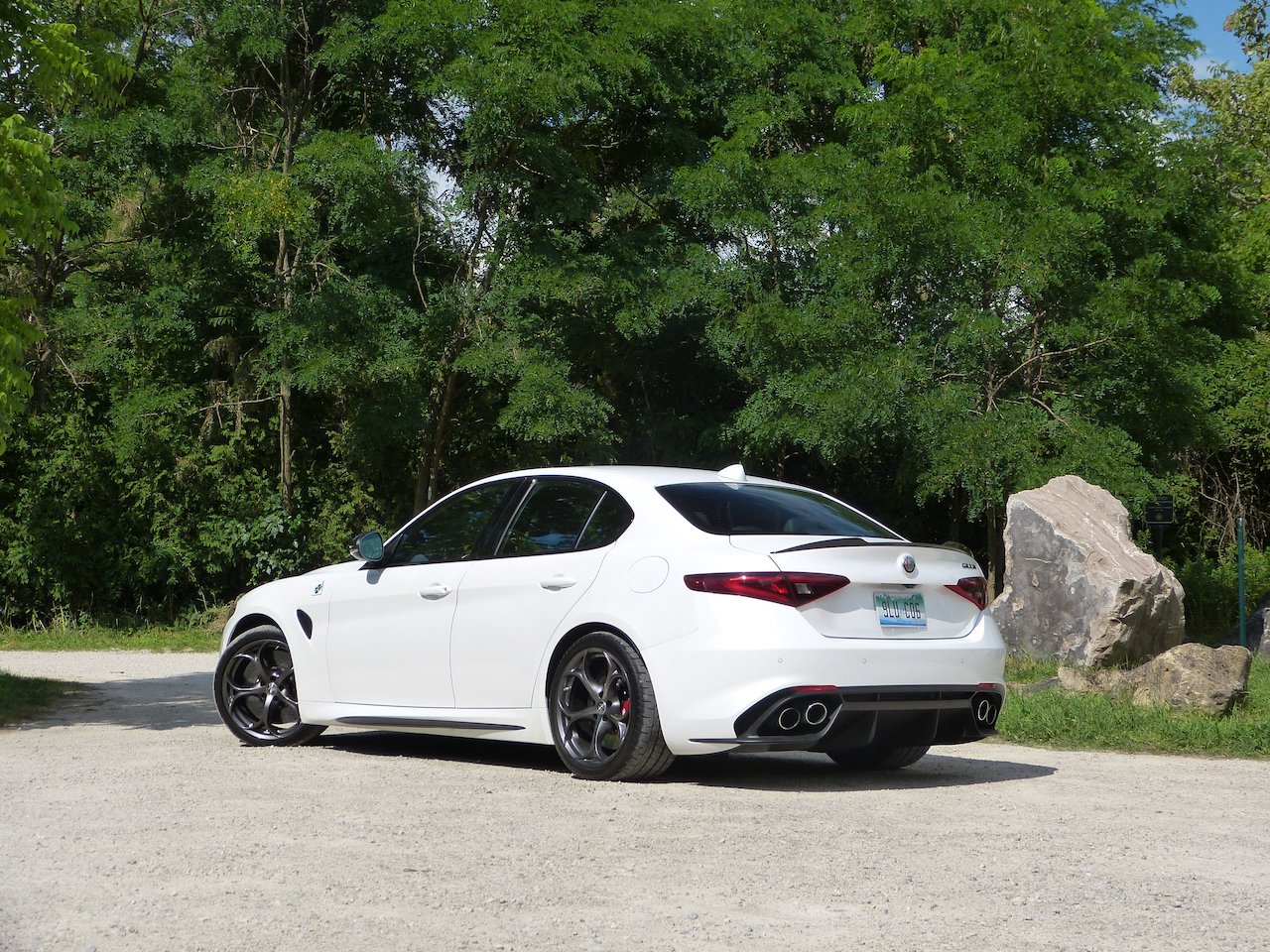 My tester was a U.S.-spec car brought north for a few of us to test drive – thank you FCA Canada!

I never could figure out how to switch the HVAC to Celsius from Fahrenheit, nor could I get it to flash the turn signals three times. Someone had set it to five, and not even a perusal of the Owners Manual could show me how how to change it back.

The seats are beautifully finished, with real stitching accents. The low roofline means watch your head getting in, but the seats are comfortable and supportive for the type of driving this car demands. It is a compact sedan, but two non-NBA stars will fit in the back seat, with a third a reasonable option.

Trunk space is about right for a car in this segment. At one point during my test, I was followed by a couple of lads in a Porsche 911. Looked like they wanted to chat. Given their choice of car, they knew a thing or two about cars – they had heard about this one, and just wanted a closer look. What did I think?

I told them roughly what I’m telling you. It has its quirks. But it’s fast. It handles beautifully. And, it’s gorgeous inside and out.