Come for the sweet-singing twin-turbo V8, stay for the ride and the oh-so-comfortable seats.

You’d be forgiven if you bought the BMW M550i just for the engine. It’s not like there aren’t hundreds of thousands of cars sold for just that reason, and the powerplant under the hood of this 5 Series is one sweet V8 from BMW.

After all, who wouldn’t fall in love with the sonorous burble and roar of the 4.4L V8 that when it launched was the first production engine to come with “hot-vee” turbos which instead of being hung from the exhaust are mounted between the cylinder heads so that they can spool up almost instantly and deliver boost at approximately the same time you decide you want to push the pedal down a little further. Because when that boost arrives, and the engine’s courteously upgraded for 2020 with 523 hp (up about 70 from last year) at 5,500 rpm staying flat until 6,000 rpm, it gives the 5er a shove that used to be reserved for supercars instead of midsize sedans.

Plus along with that power comes a wonderful shove of torque which with BMW’s latest revision shows up for 100 rpm longer than before and with 74 extra lb-ft in total. There’s 553 lb-ft here from 1,800 to 4600 rpm to move you forward like the surge of a crowd exiting a long-delayed subway car. Like the wave of a lightly loaded passenger jet but a whole lot quicker.

It’s a powerplant that rumbles to life with a cold start and settles into a lumpy idle – what 1970s domestic V8s wish they had been able to achieve. It screams toward redline with a fury of noise and acceleration, while putting near zero harshness or vibration into the cabin. Refined like a pared-down symphony to transmit only the perfect notes to your ear. Not the visceral scream of a supercar (or Shostakovich’s 10th) but something approaching the steamroller crescendo of John Williams’s Jurassic Park Theme. Only this time you’re already inside the T-Rex. 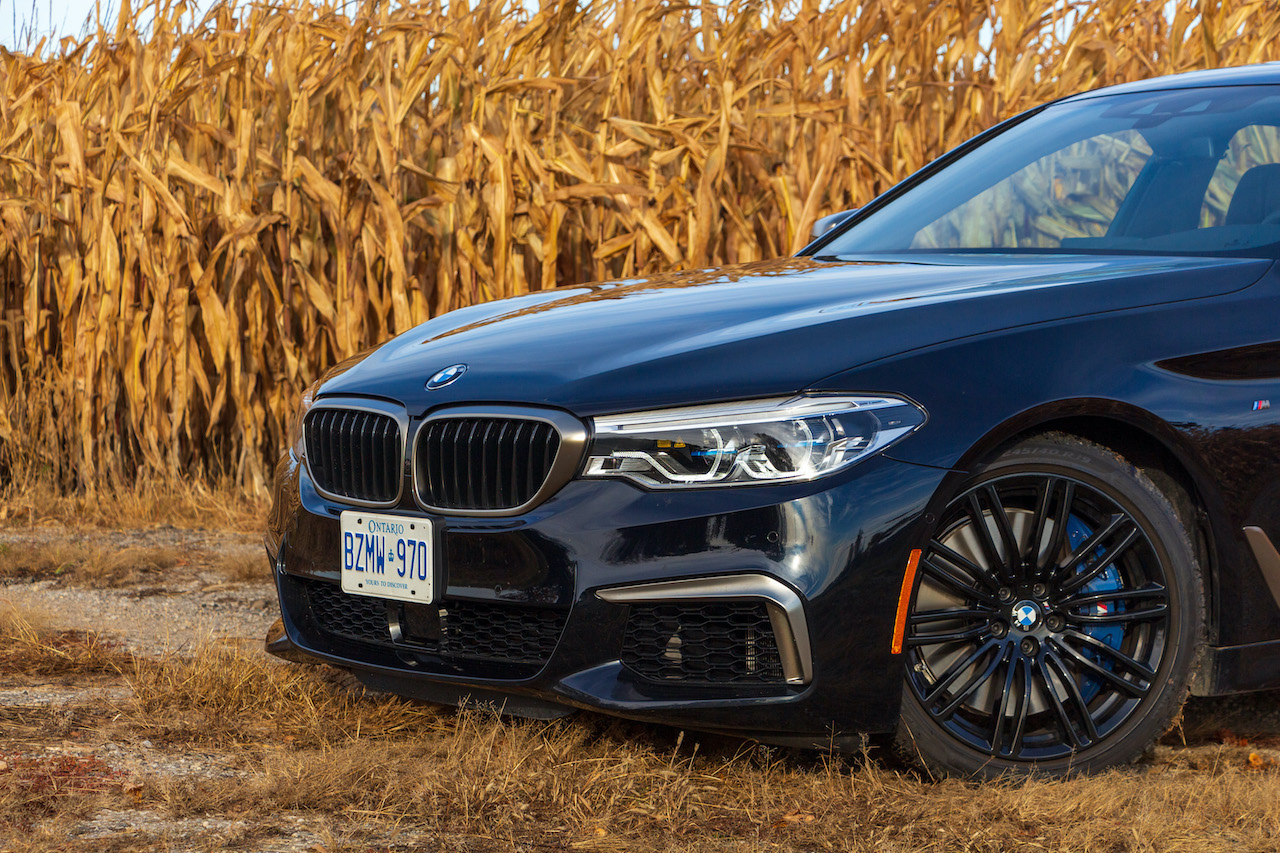 An engine that is so smooth it is let down by the gearbox that is attached to it. Able to snap off quick changes up and down through its eight ratios while under hard acceleration or the even harder force of braking that it experiences thanks to the massive M Performance brake rotors and calipers. A gearbox that is just as happy jumping down through its ratios when you tickle the firmness of the signature floor-mounted BMW accelerator that is nearly perfectly weighted for making your throttle control look like that of BMW team driver Bruno Spengler rather than the hapless ankle flexing that you’re actually capable of.

Instead, that gearbox lets down the engine when it’s needed most: while you’ve been sitting at a stoplight with the start-stop system teasing you by making the noise go away until that cursed red turns green and you’re able to bring it back to life. In the comfort mode, and especially Eco Pro, the engine springs back to life with a shudder of embarrassment for being late to the party. The automatic accepts the torque with a similarly surprised pause where nothing happens before clunking slowly into action. With less motion than you had expected, so when you apply some extra pedal the car starts forward with a jarring lurch as though you’ve somehow hurt the long-suffering V8. It shows that hurt feeling when you’re braking too, feeling like it’s straining to pull ahead when coming to a halt. 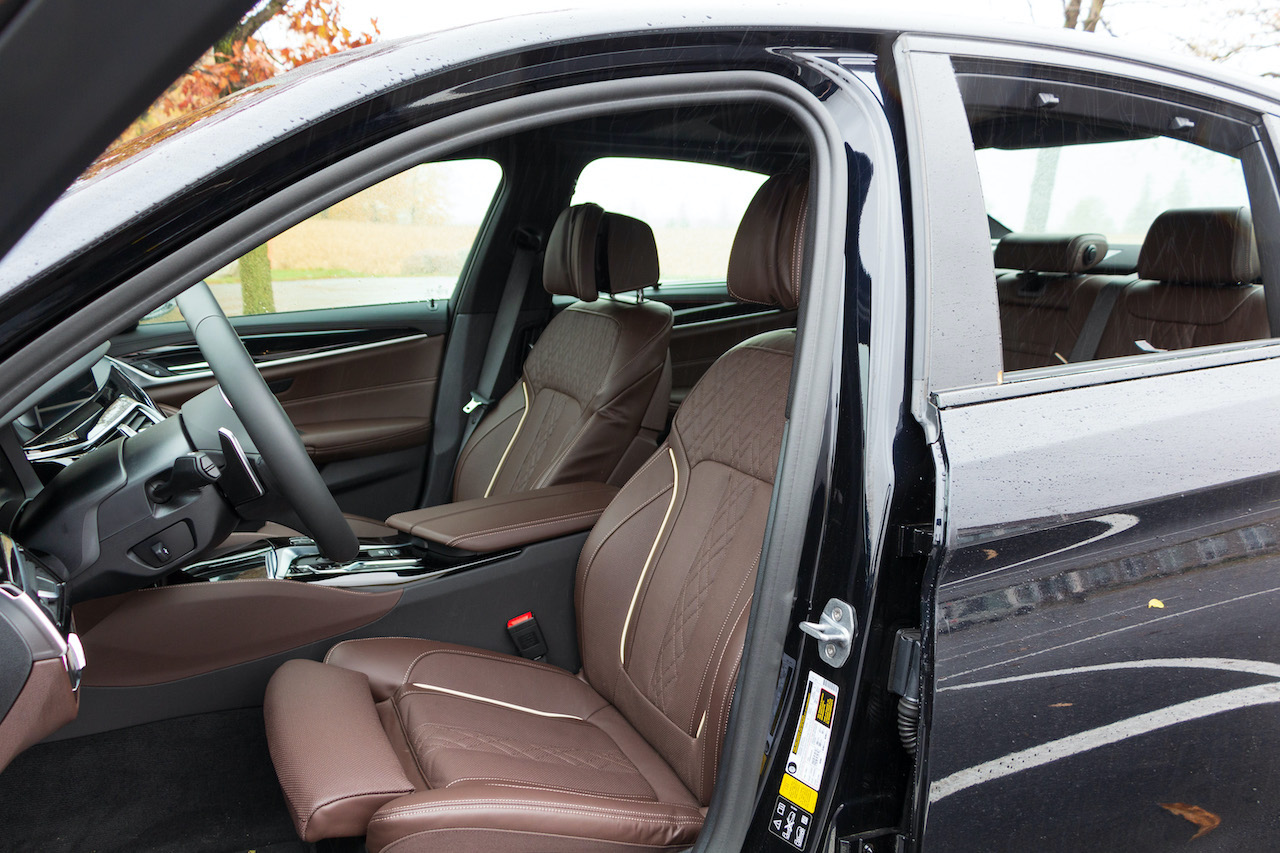 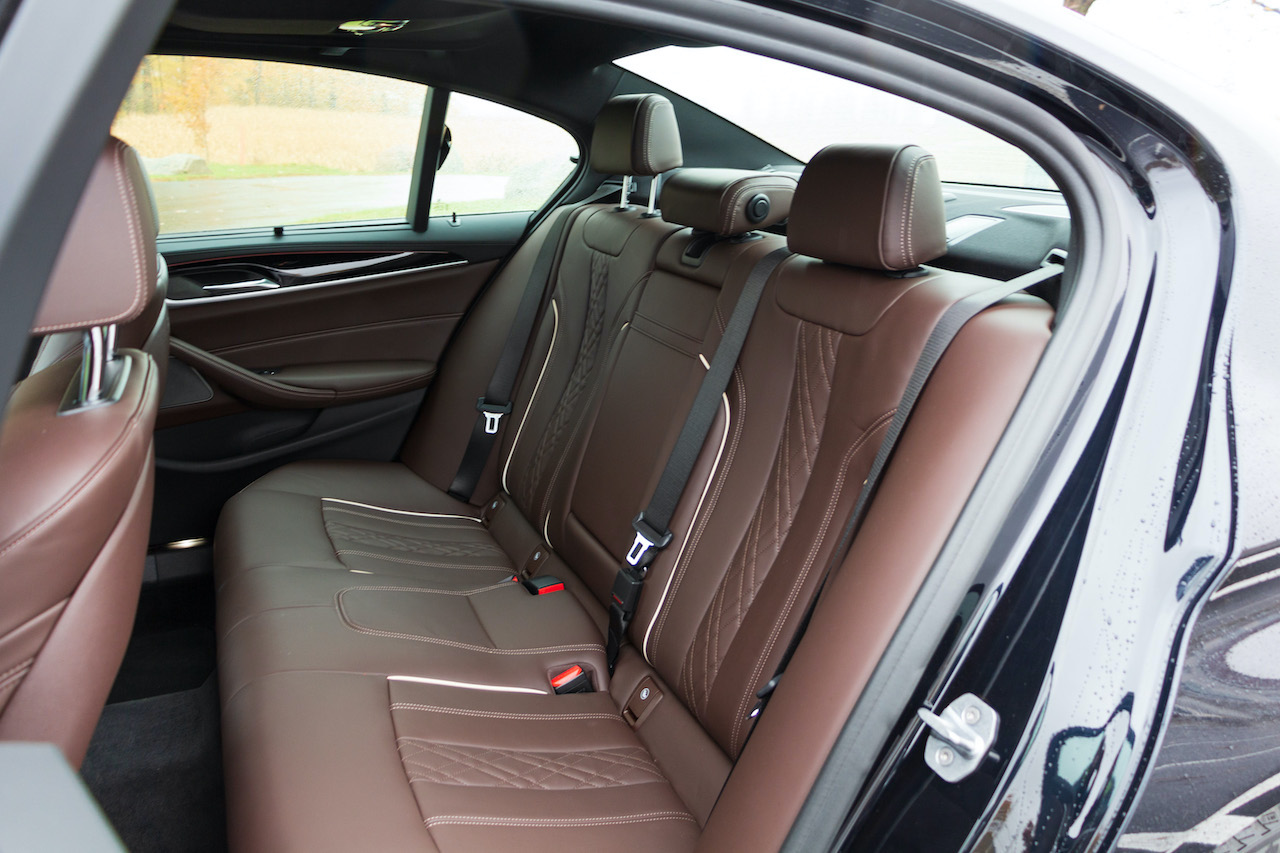 After your right index finger has had the privilege of firing the V8, your hand will fall naturally on a steering wheel that’s as meaty as the engine. Thick and clad in supple leather it lends a feel fitting of the heart of this beast. Connected to a steering rack that is unable to give you the same level of feedback as the quad exhaust pipes and their black chrome cladding, but offers a directness and responsiveness which equal the quick action of the twin-turbochargers. In Sport Plus mode, the effort of the steering approaches the beefiness of the wheel itself, becoming increasingly responsive and giving you a level of agility belying the size of this capacious sedan. The balance, predictability, and poise you really appreciate when a cold, damp, dusty road surface and a short gap in a long line of traffic leave you with less traction than you had expected when the V8 sends a shot of power to the rear wheels.

Generous levels of power, of course, require an impressive chassis to allow you to use it in more than just a straight line, and so BMW has accompanied the N63 engine with a great one. The M-tuned adaptive dampers are capable of absorbing the harshest impacts while transmitting only the noise of the low-profile rubber impacting the asphalt. When you invariably discover that the engine’s enthusiasm means you have arrived at that bendy bit of road with a healthy level of pace, the suspension shines as well. Keeping the car flat and unflappable regardless of what the road has in store. A fitting partner for the V8’s eagerness to gain rpm, this chassis is waiting excitedly for the next set of curves to arrive. 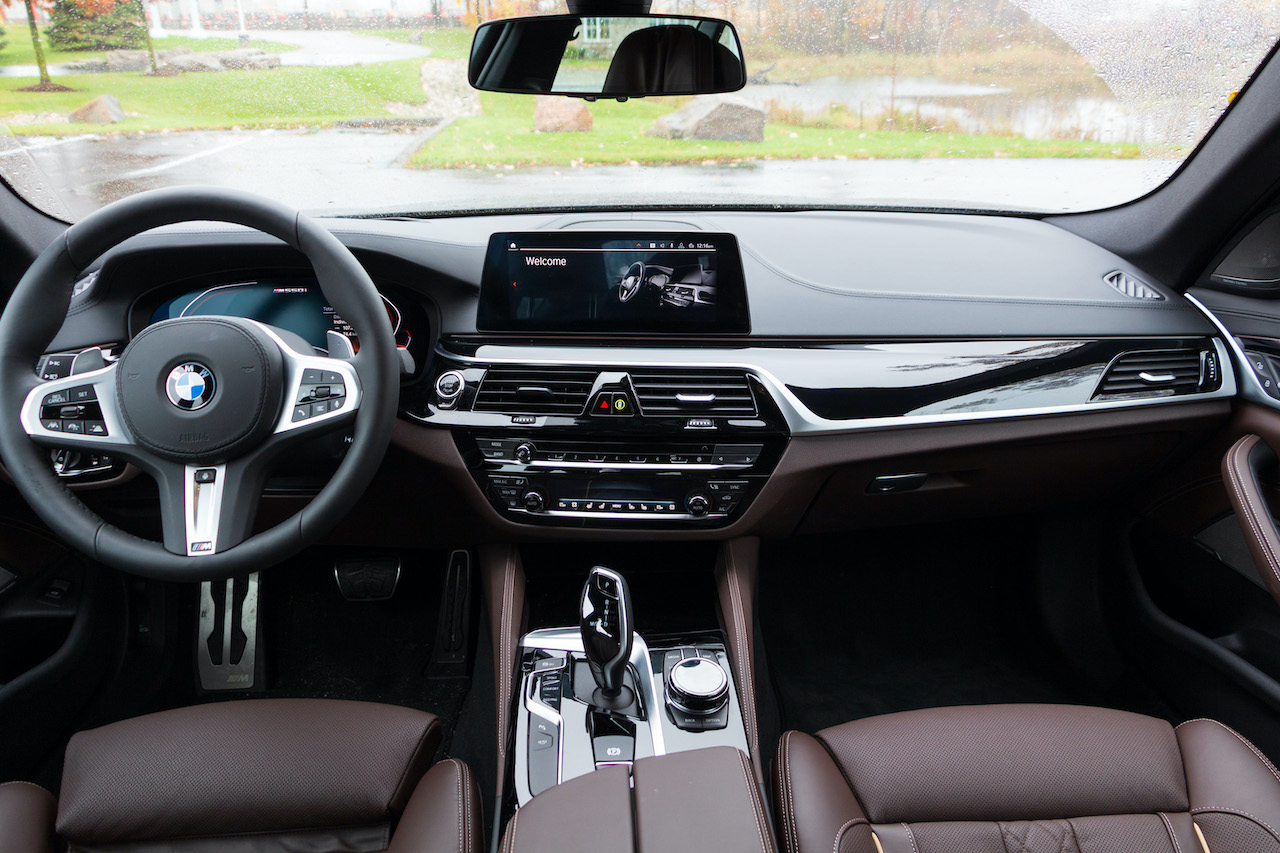 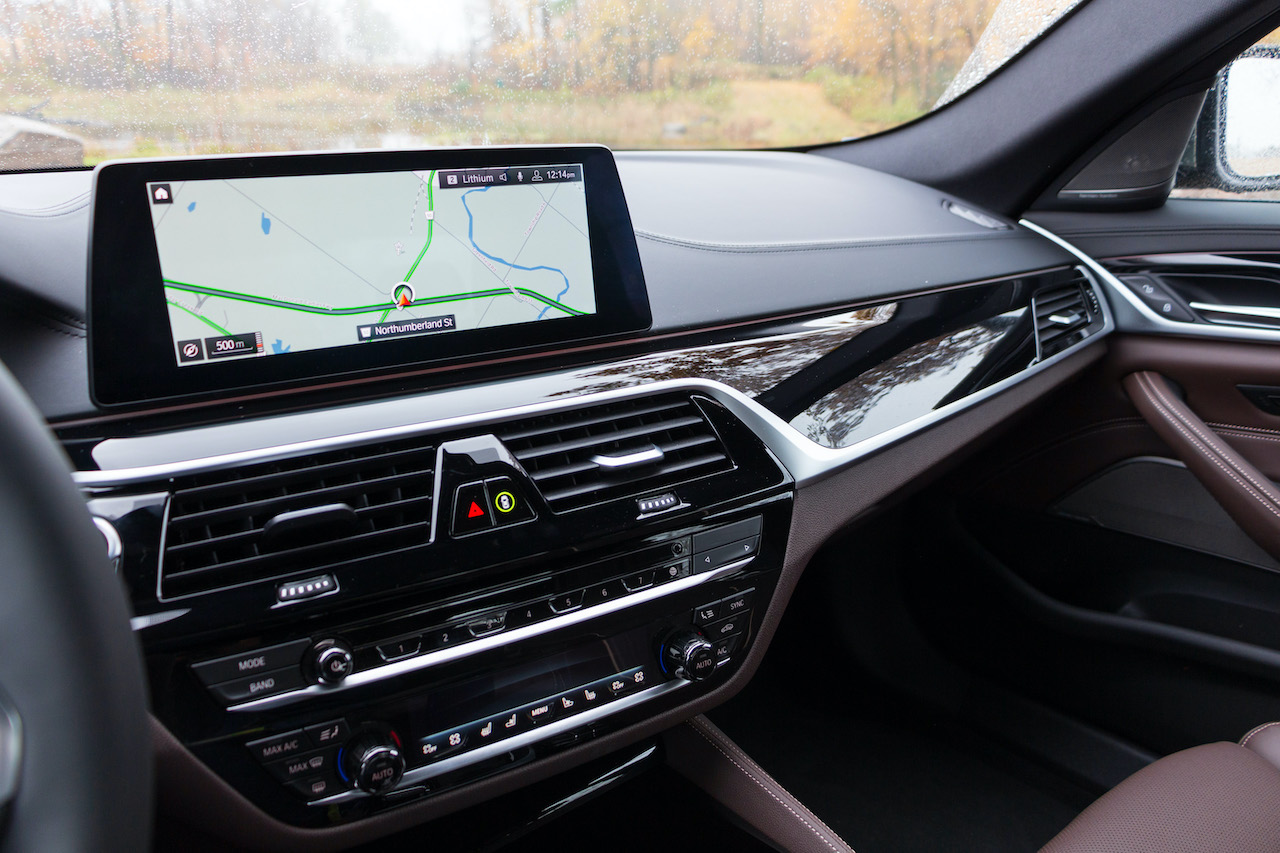 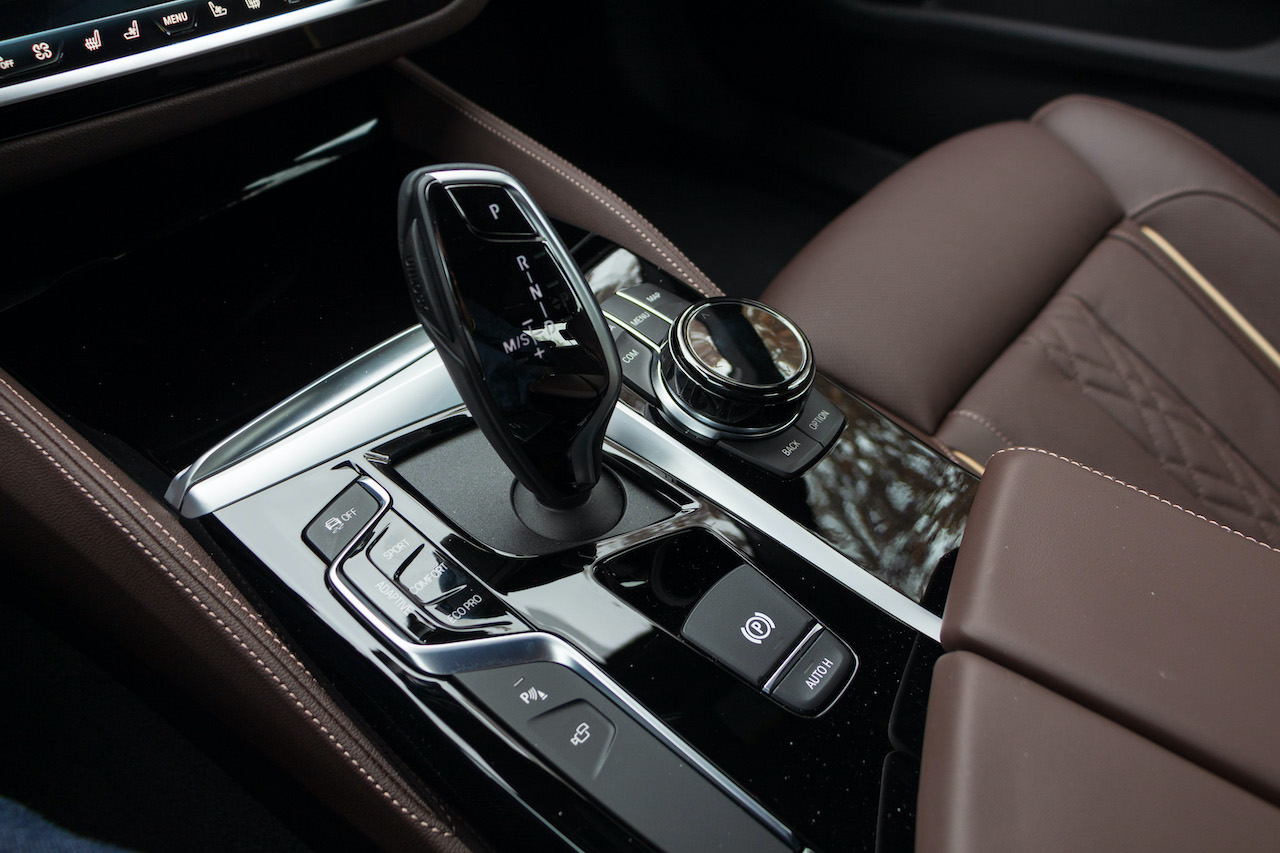 While exercising the engine and chassis could occupy an entire day, sooner or later it’s time for a little less Sport Plus and a little more Comfort mode. Make that your command and the bolsters of the M550i’s seats relax to let you lounge with the same ease with which the engine lopes at highway speeds. Those same chairs can then massage you back into serenity with more options than you’re likely to ever use and enough adjustments to keep you occupied for days. The combination could leave you so relaxed that you might not even want to make the effort of reaching for the volume knob of the exceptional Harman Kardon stereo. In that case, a simple twirl of your finger is enough to raise or lower the volume. Gesture controls that let you adjust the volume, change stations, and select the navigation screen with a wave of your hand in front of the 10.2-inch infotainment system should impress any passengers who are nonplussed by the engine that lurks under this beast.

No fewer than four adults should be able to experience the joy of the engine and watch as you conduct the iDrive system like Leopold Stokowski. That includes yourself, of course, and though you’ll have the best seat, there isn’t a bad one to be found for passengers of most sizes. Should your passengers find themselves overheated with the experience of the V8, the quad-zone climate control system will restore their cool and integrated window sunshades should help them to stay that way. 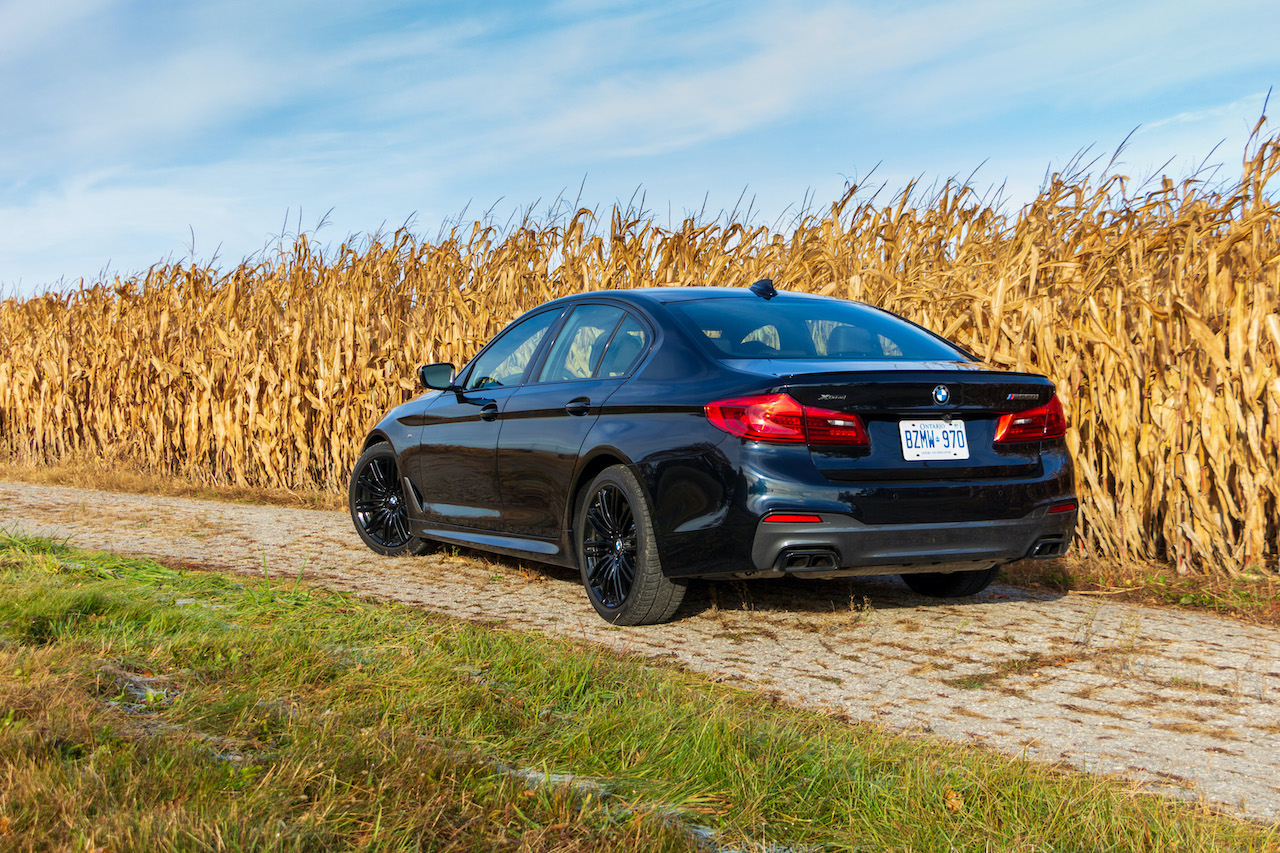 A soundtrack like that needs to wear an equally subtle yet stylish suit, and so BMW has given this M550i a delightful shade of black paint that’s really a deep blue when the light hits it. Matched thanks to a Canadian late-fall season with black double-spoke wheels that aren’t actually the right ones for this car but are part of the winter pack that wisely trades style for sidewall, dropping from the stock 20 to 19-inches in diameter. Plus larger intakes and the stand-out exhaust, with all the trim and badging finished in a sublimely subtle dark Cerium Grey finish.

You see, you simply couldn’t be faulted for purchasing an M550i with the sole purpose of adding that delectable V8 engine to your daily drive in this car that’s more powerful than the last M5 for much less outlay. But BMW has given you far more reasons to want to live with the M550i, including the excellent chassis, confidence-inspiring handling, and the relaxing comfort that you deserve in a vehicle of this calibre. So come for the engine, stay for the interior, and enjoy every drive in between. And roll your eyes every time you see the big digital M550i badge on the digital dashboard display that you can’t seem to remove. Because you’re not likely to forget which 5er you’ve chosen. And if you do, your right foot will remind you just fine.