The Cadillac XT4 is a vehicle of contrasts.

No one could foresee a global health pandemic and the economic and societal upheaval it would subsequently cause in the spring of 2019, which is when GM’s poshest brand first happened to launch its Cadillac Live online showroom in Canada, leading up to a U.S. launch in the fall.

Any visitor to Cadillac’s U.S. or Canadian consumer site since late last year can choose to start a Live session, which connects you with stylishly attired brand experts in a tech-friendly Cadillac showroom that can give you a full walkaround of a vehicle’s highlights in real time, where you see them and the vehicle as they walk around with handheld cameras. They can hear you, but not see you, so browsing in your pajamas (or anything) is not an issue. If you’re not looking for a full walkaround, they can answer your specific questions on a particular model, or demonstrate rear seat legroom and cargo space with a set of golf clubs, as I discovered in my Live session with Zain.

“If something like wireless charging is more important to you than the twin-clutch all-wheel drive system, we’ll spend more time on that,” said Zain, whom I spoke to a few days into my week with the XT4. “It’s hyper-personalized.”

Cadillac Live is a key research and owner advantage

With many dealer showrooms closed for much of April and May this year, and carefully re-opening GM stores still struggling to accommodate consumers inundated with health advisories or mandates involving masks and social distancing, how prescient does Cadillac Live seem now? 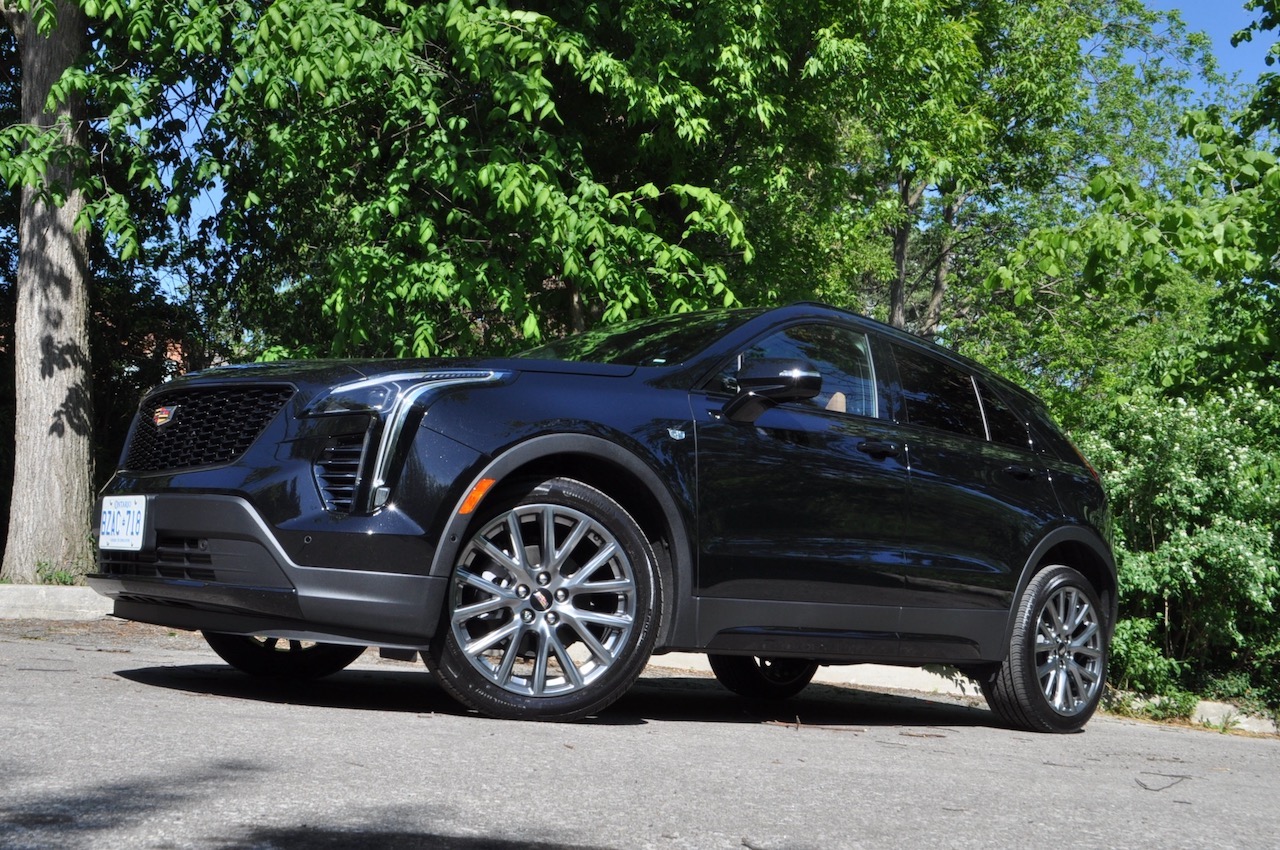 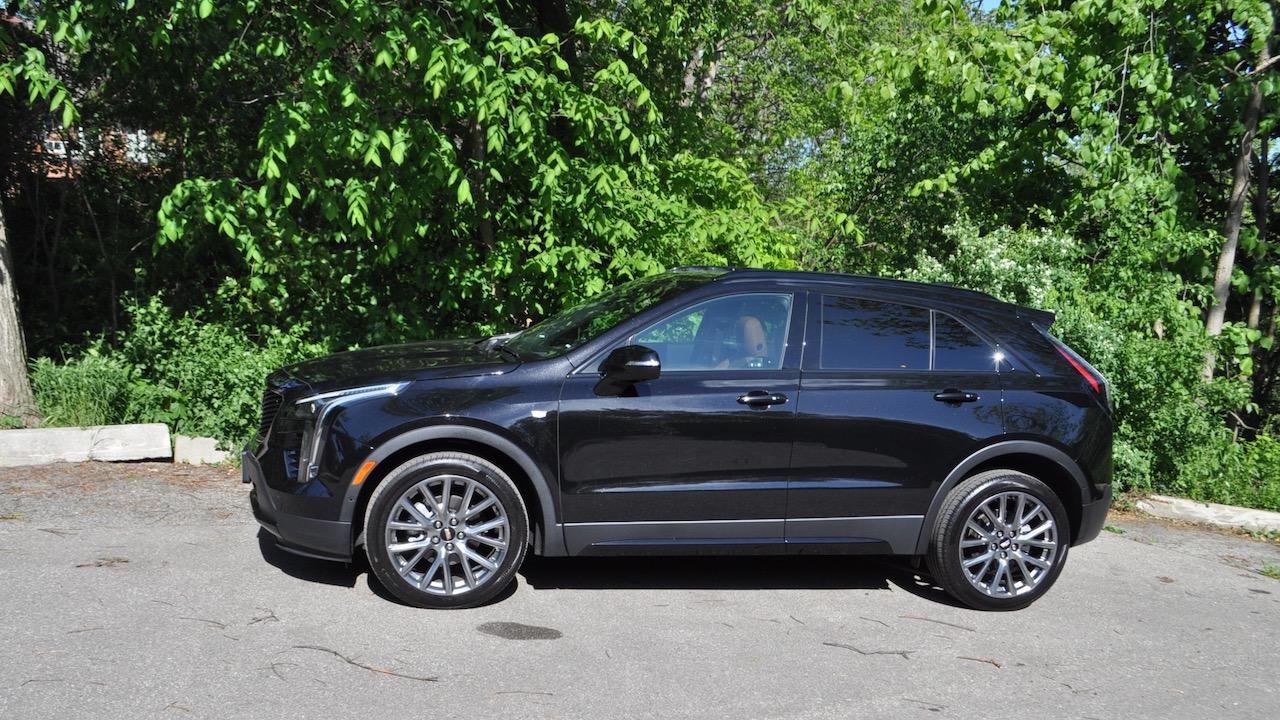 Even for recent Cadillac buyers, there’s much to learn about their vehicles here, especially for owners who haven’t taken a deep dive into the owner’s manual – likely the vast majority, when you look at the size of it, and the number of features and options it details.

Moving from the digital to this here 2020 Cadillac XT4 Sport compact crossover heavily optioned to the tune of $60,518, before taxes, Cadillac’s smallest SUV has one of the largest interiors in its class, with a user-friendly infotainment system, as well as a bevy of optional niceties.

The ventilated seats were especially welcome on sticky hot days, and if you’re not a fan of “air up your butt,” as some colleagues have described the feature, then perhaps the massage seat option for both front seats will be more up your alley. And likely appreciated all year-round, even if the button down low on the side of the seat makes it easy to forget about – or miss totally. 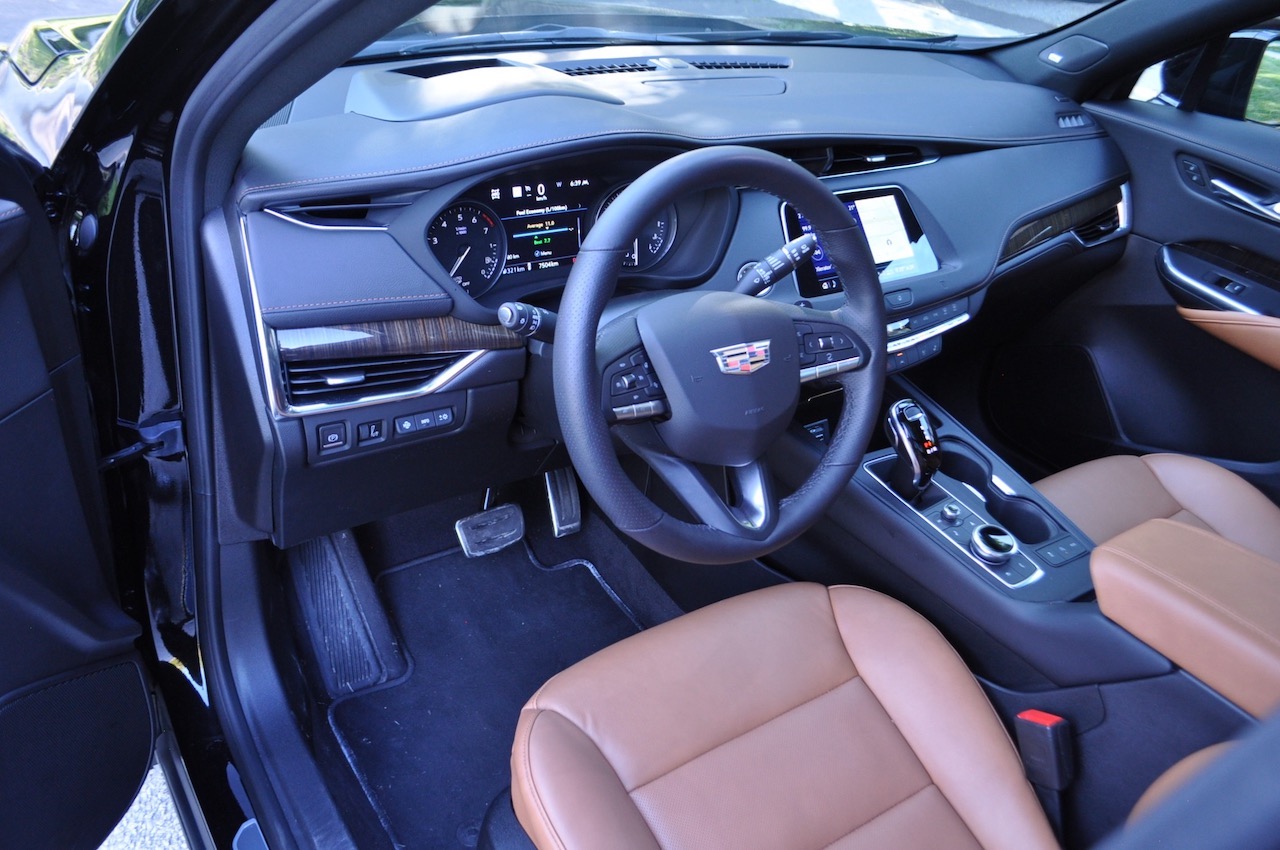 On the other hand, there’s only one powertrain on offer here, a common 2.0-litre turbocharged four-cylinder arrangement in this class, which delivers neither the most power nor the best fuel efficiency. And that’s not even considering its hybrid or plug-in rivals, which take fuel efficiency (and sometimes power) another level or two beyond the conventionally powered XT4.

That said, this 237 hp four-cylinder is impressively smooth and acceptably powerful, its worthy 258 lb-ft of max torque at 1,500 rpm an indicator of its effortless personality just off idle. Worthy fuel-saving measures such as cylinder deactivation (rare in any four) and start-stop are standard, while the XT4 can tow an impressive 3,500 pounds when properly equipped, which matches the rating of its larger and more powerful XT5 big brother. 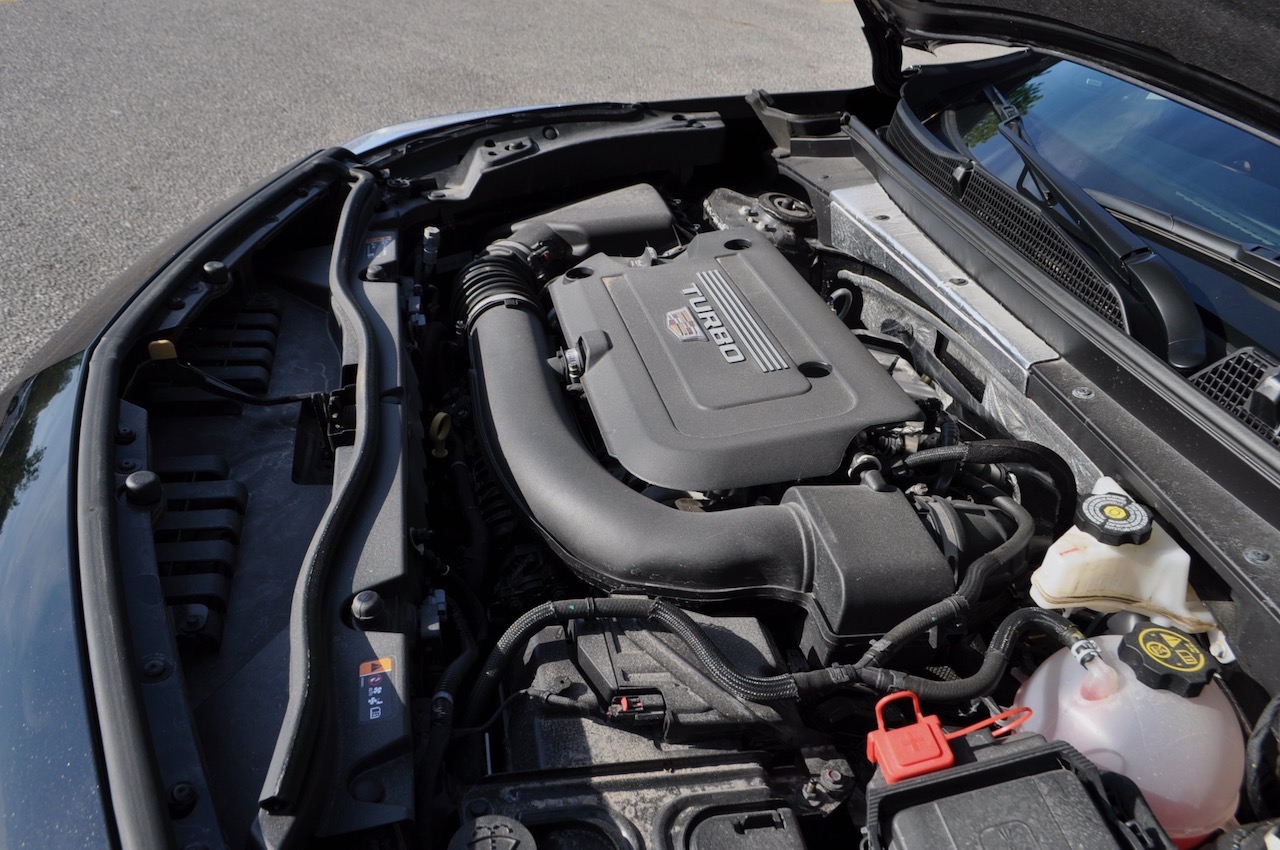 Putting the Sport in Sport mode notably quickens the pace of its shifts, which can be sharply executed using the paddles behind this model’s steering wheel, a rarity in small SUV circles. There are also locked all-wheel drive and an Off-Road modes, though the XT4 defaults after every restart to its comfort-oriented Tour mode, unsurprisingly.

Handling is also noticeably sharper, as you can easily feel when putting it in Sport mode halfway through a highway onramp. But it’s more a mood change than personality shift, and is where some may wish the XT4’s Sport model would offer more than different wheels and paddles to differentiate itself.

Interior a user-friendly yet tech-heavy showpiece

Getting in, the XT4’s sophisticated interior has moved away from Cadillac’s Cue touch sensitive system back to a more conventional luxury-level infotainment system. There’s a rotary knob controller as well as a real volume button just underneath the electronic shifter, which twists and selects with a push, which is very useful for keeping fingerprints off the screen, if less successful in keeping the driver’s eyes on the road. 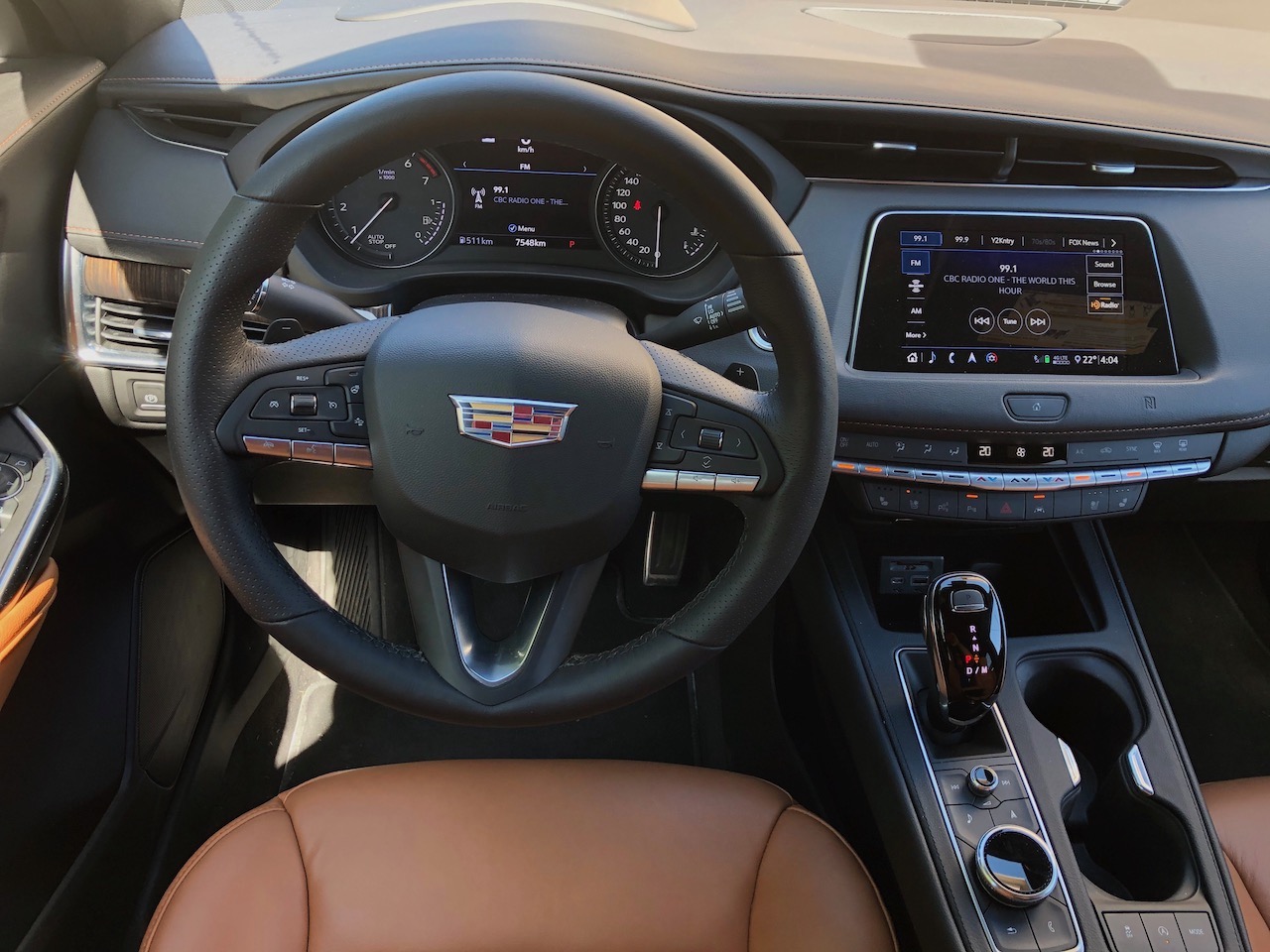 That’s usually not an issue, as the steering wheel houses plenty of adjustability for scrolling through either your preset favourites, or seeking out something new.

The XT4 doesn’t have a massive central screen as seen on some other luxury products, but between the center screen and the screen in between the dials that can be adjusted to show navi, GPS or other commonly accessed functions, it’s not lacking for information for the driver.

There’s also both traditional USB and the latest new USB type C connections up front and in the rear, which is handy now as well as in the future. There is also Apple CarPlay and Android Auto, plus wireless charging available, although sadly no wireless CarPlay, like the new Escalade offers. 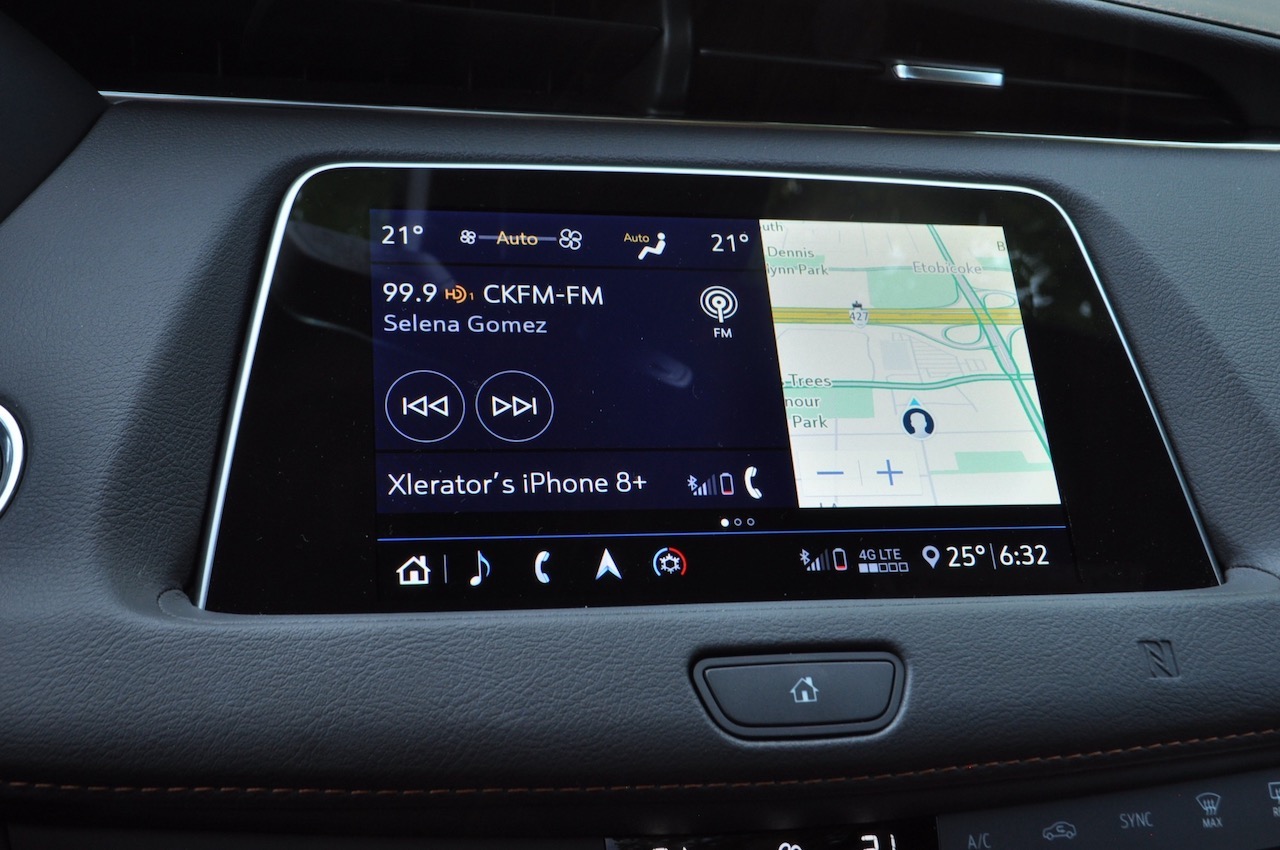 Keep in mind also, the wireless charging pad is underneath the armrest, which means if you want to wirelessly charge your phone, your elbow has lost its comfy resting spot on the centre console.

There may be way more buttons than one finds inside touchscreen-dominant rivals like the Volvo XC40, or the button-less minimalism of a Tesla Model Y, but the overall ambiance is one of user-friendly luxury.

Roomy for passengers, about average for cargo space

Looking at the size of the XT4’s dimensions compared to its entry-luxury crossover rivals, it’s clear that the Cadillac offers more room than most, its front legroom and headroom lining up closer to bigger crossovers like the Mercedes-Benz GLC than most of its rivals. The XT4’s 2,868 L of overall passenger space lands just a bit less than the new Lincoln Corsair, but slightly more than the BMW X1. 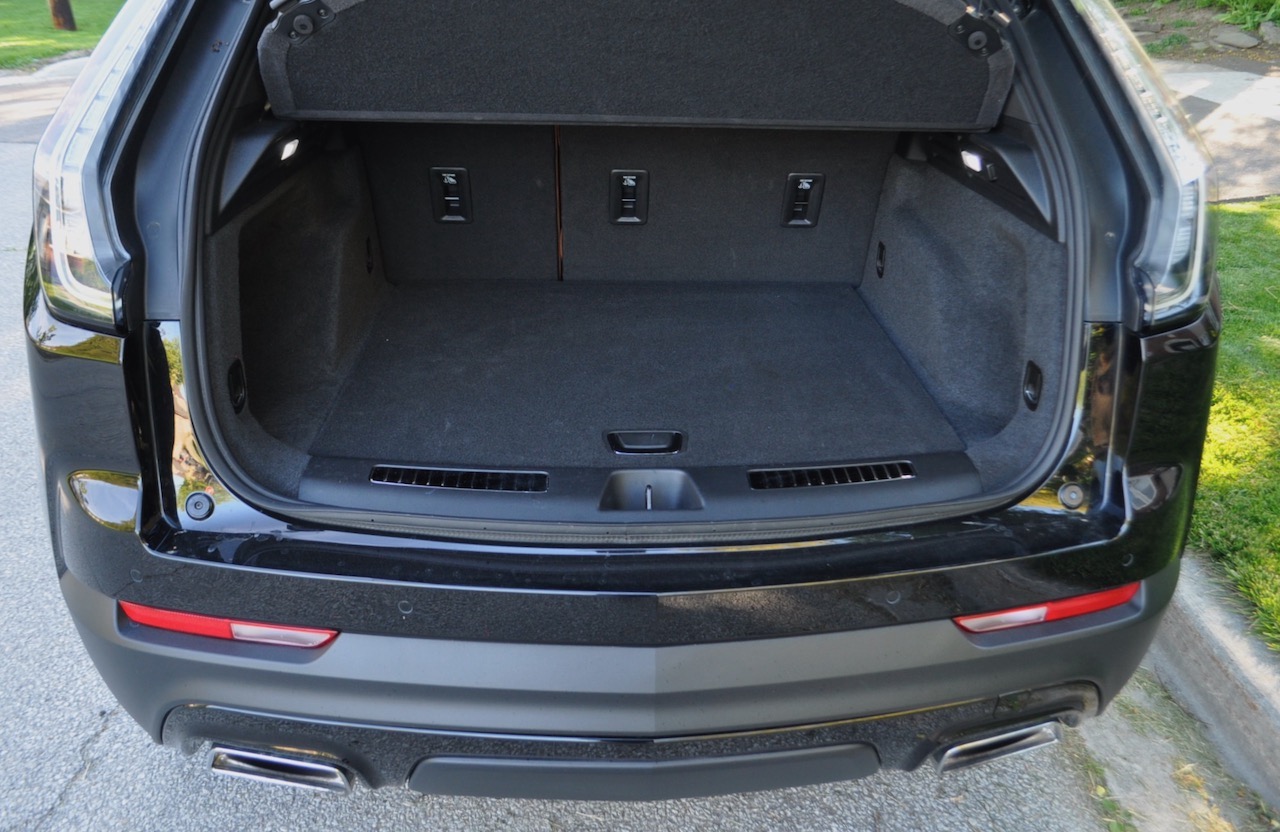 The XT4 also has lots of cargo room, but notably less than those two rivals noted above, whether the seats are up or down. The Caddy comes in at 637 litres, and 1,385 L with rear seats folded, besting the Audi Q3 and Volvo XC40, so call it about average in its class for cargo space.

From a safety standpoint, the Lane keeping assist system is very subtle but effective, nudging you into the centre of your lane when you drift off, but not with an obnoxious jerk of the wheel or beeps that everyone can hear. 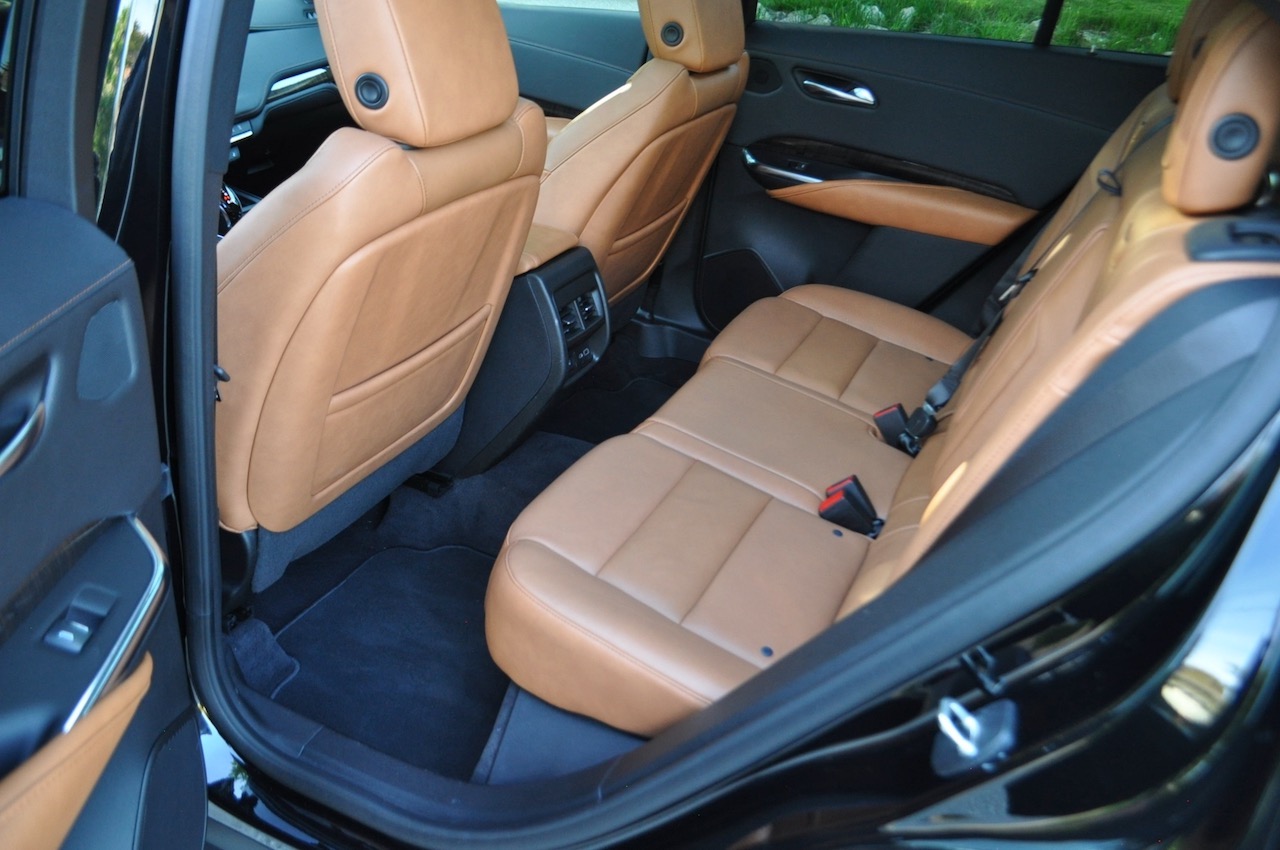 Yet it was surprising to find that this heavily optioned SUV in this class that costs just over $60,000 didn’t come with adaptive cruise control, especially considering all the other luxuries it offers.

Lots of options can become pricy

This was actually one of my questions to Cadillac advisor Zain, and the other about a missing foot-operated rear power tailgate function, both of which are available at much lower price points in non-luxury vehicles.

Turns out, the power tailgate can be opened using your foot even with the key in your pocket and your arms full after all, not with a foot sweep or kick under the rear center point of the car, as with all other such systems, but under the left rear corner of the bumper. Apparently, there’s a projected light with a Cadillac badge that shows where to kick at night, but on the sunny days I tried it, I didn’t see any projection. 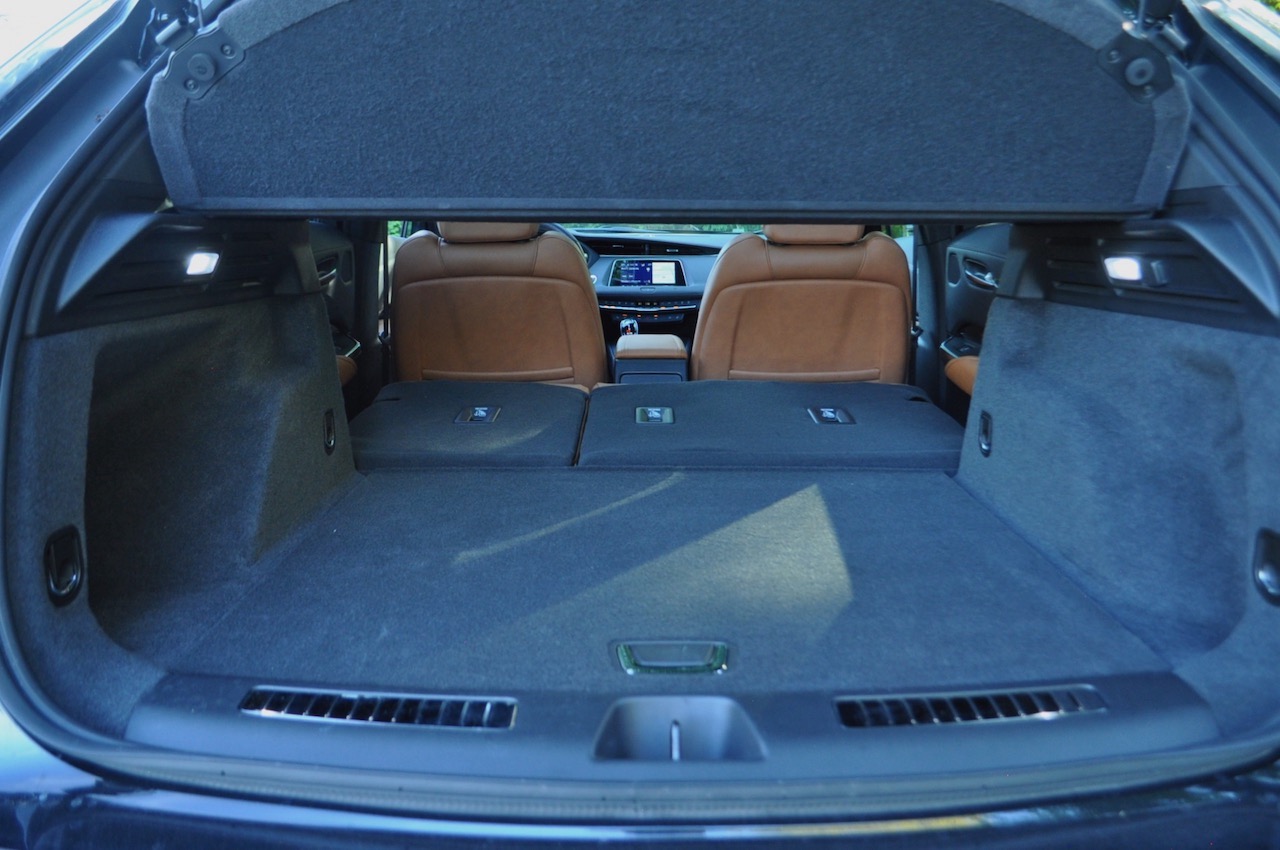 Once I went back out and tried it, eureka, kicking under or near the driver’s side rear bumper corner worked like a charm.

Regarding the adaptive cruise control, as knowledgeable as these brand ambassadors clearly are, they’re not infallible. After I had tested the cruise multiple times, I couldn’t find a way to activate the function and thought that I either didn’t have the option, or there may be a step I was missing.

He showed me a button on the upper trim Sport steering wheel that he suggested indicated the car came with the feature, which my photos verified were on my car. 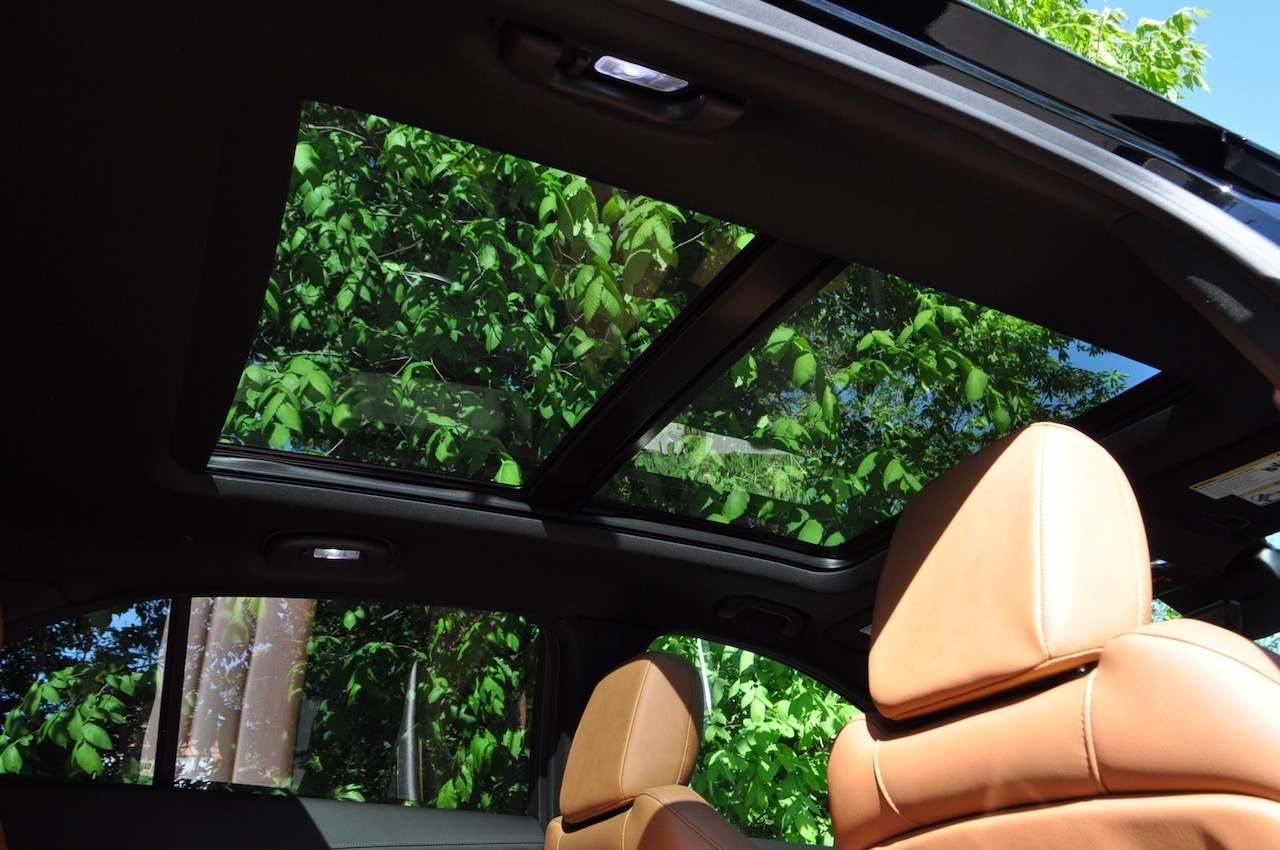 A GM rep soon confirmed that no, in fact my particular vehicle didn’t come with the Driver Assist safety package that contained that option. It is available, for $1,200 he said, but its omission is as surprising as much for the inclusion of so many other pampering luxuries.

One last downer note: even in near ideal weather conditions, requiring some but not constant air conditioning, real-world fuel consumption came in thirstier than the XT4’s official 9.7 L/100 km figure, at a disappointing 11 L/100 km flat. Plus the XT4 takes premium fuel, like most but not all in this class, making its hybrid or plug-in rivals more attractive environmentally and financially.

The Cadillac XT4 is a vehicle of contrasts. It’s almost as if the Cadillac Live digital preamble as well as the XT4’s sharply creased exterior exudes a futuristically confident greeting that its powertrain and efficiency doesn’t quite back up. It’s a new school Cadillac that excels in traditional Cadillac strengths such as comfort, quiet and roominess. 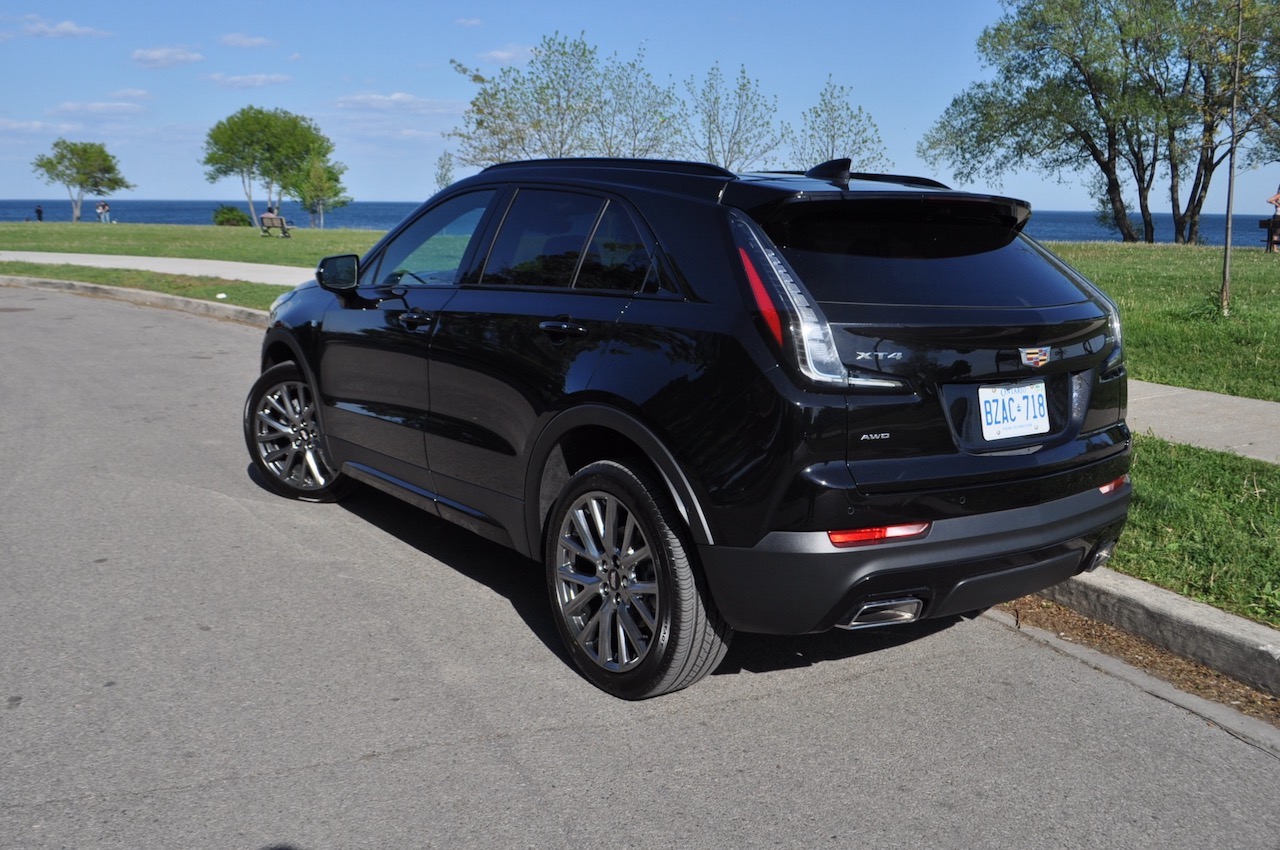 For many buyers in this segment, that will be an attractive combination, pandemic or not.