About 20 years ago, Cadillac threw some lipstick on a GMC Yukon and called it “Escalade”.

Surely to GM’s surprise, some rappers featured it in their videos. Suddenly, Cadillac was relevant to young people. Maybe they couldn’t afford one, but their parents could. Almost overnight, Cadillac became a truck brand.

They still make cars – some damn good ones, which we’ll get to in the coming weeks. Meanwhile, there’s a whole raft of new Caddy SUVs joining the “Slade”. They’re all named XT”n”, with n ranging from 4 to 6.

Base list for my three-row XT6 “Sport” was $63,798. A bootfull of options including semi-analine leather (in all three rows so the kids don’t get short-changed), automatic parking, night vision and enhanced automatic braking brought the sticker to $78,128.

Looking at local dealer web sites, discounts in the five-figure range seem to be the order of the day. There’s only so much stylists can do with a two-box SUV. Some details like thin LED lights give the XT6 some presence. 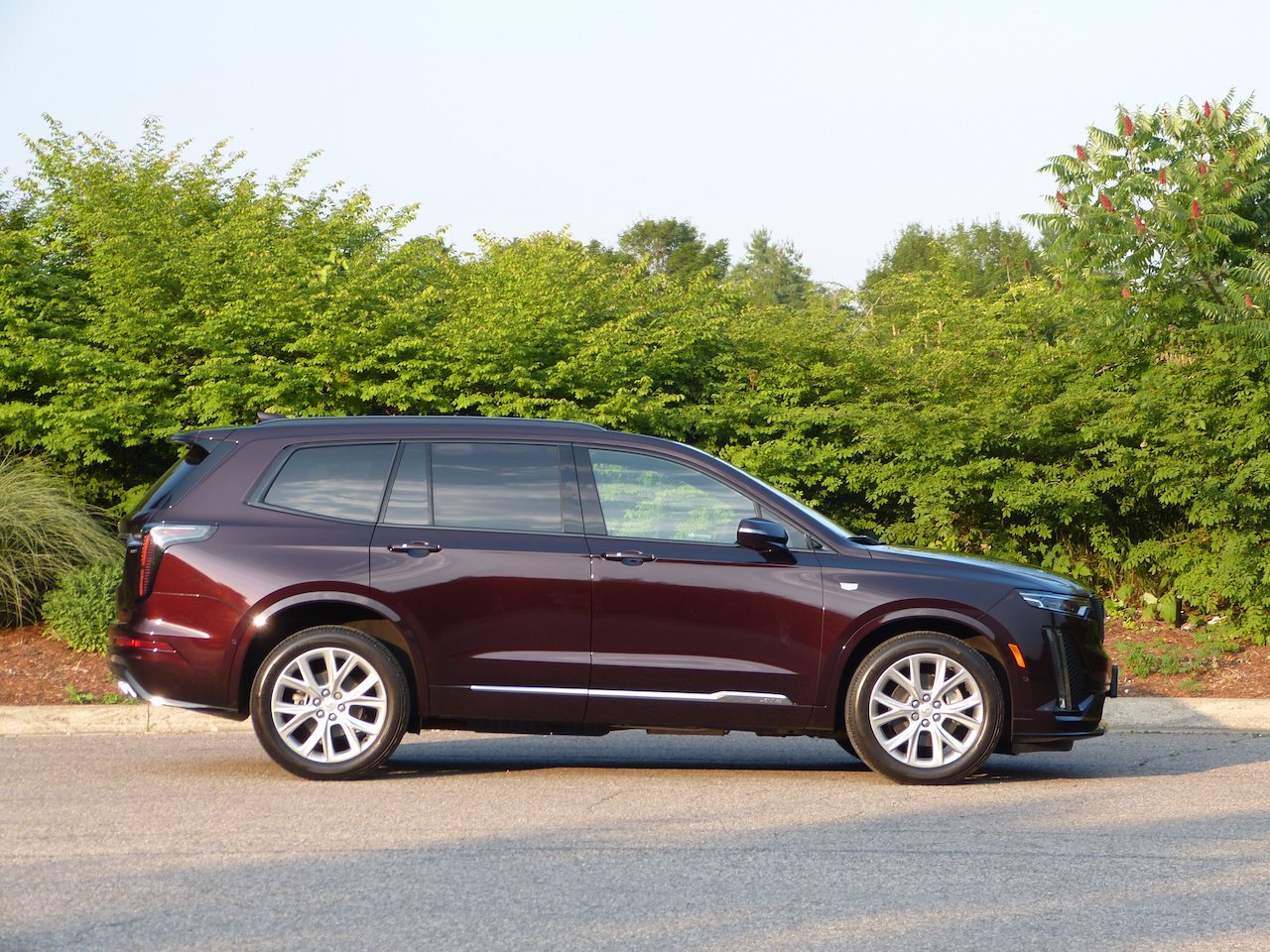 At first, I thought it odd that the middle row of seats were not fully power-adjustable. In an on-line discussion using the “Cadillac Live” app, Caddy expert Howie Hughes noted that you can manually flick the middle seatback forward in less than a second, while a motorized seat would take five or more. Those of you with young kids know that they, the most likely third-row inhabitants, aren’t strong on patience.

Hughes showed that his just shy over 6-foot frame could sit quite comfortably in what Cadillac claims is “class-leading” two-seat third row space. The split middle bench is also adjustable, so everyone should be decently accommodated. Twin captain’s chairs are also available for Row Two. Happily, a child seat installed in the second row does not have to be removed to access the third row.

The rear two rows fold flat, creating a 78.6 cu. ft cargo space with a flat floor and tie-down hooks, with hidden storage underneath for valuables. The power tailgate offers the handy kick-to-open or close feature.

There’s on-board WiFi, Apple CarPlay, Android Auto and all sorts of USB ports for the kids’ toys. They’ll also be useful for those running businesses from their cars.

A massive sunroof is probably more useful for the added light, notably in the third row, than for ventilation.

I was delighted to see that Cadillac has dumped most of its “CUE” minor controls system which required way too much of your attention to operate. Geez; they could have just asked me… Instead, there’s a large rotary knob where your right hand naturally falls, with buttons at the four “quadrants” to select the system you want to control. It will take some acclimatizing as these always do, but it’s vastly better than before. 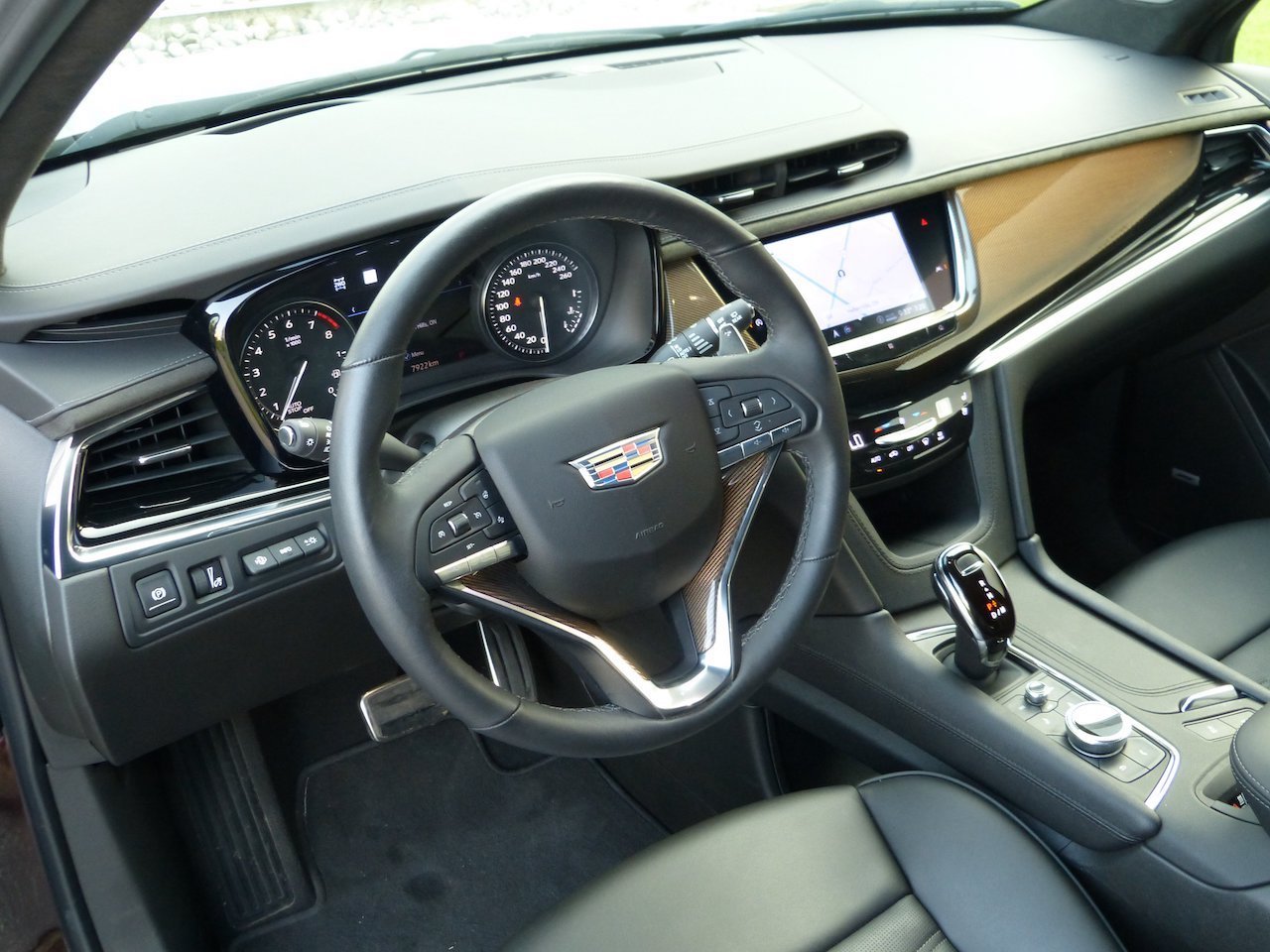 The slick-shifting nine-speed automatic helps keep the engine in its sweet spot for decent performance, with 0 – 100 km/h coming up in just over seven seconds. Not as quick as Lincoln’s 400-horse Aviator, but you aren’t likely to be drag-racing in a XT6.

The engine can run on four cylinders to save a few drops of fuel and transitions are near-seamless. The idle shut-off helps here too in heavy traffic. Don’t like this feature? You can easily disable it.

The powertrain is also quiet, as you might expect from a Cadillac. An ideal environment for the BOSE 14-speaker stereo system.

Shame about the shift quadrant though. “Park” has been full-forward for just about ever. Why do we now need a separate button? And the logo on the shift knob suggests you slide it side-to-side to toggle between D (for Drive) and S (for Sport). But no; it’s fore-and-aft. Sure, you’ll get used to this, but you shouldn’t have to.

My tester had a trailer-towing package for up to 4,000 pounds (1,814 kg). So, a smallish boat/trailer. Need more? There’s the Slade. A drive mode control lets you choose how you want the vehicle to behave. “TOUR” keeps you in front-wheel drive, and I actually got it a bit tail-happy when overcooking it a shade on a dust-covered roundabout. A quick flick of the wheel before the Direction Stability Control kicked in saved the day. The quicker steering ratio that comes with the Sport model probably helped here. 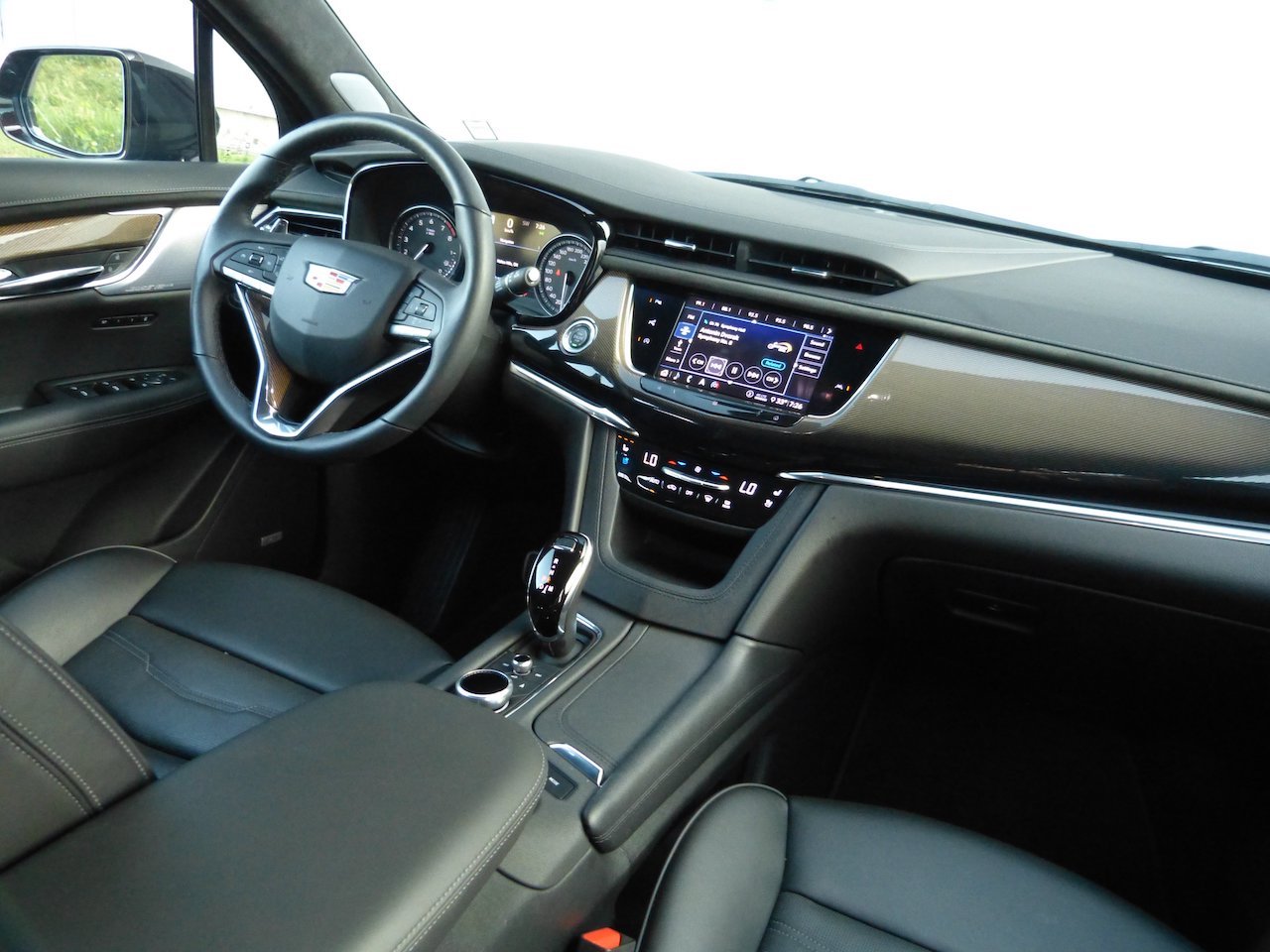 “AWD” mode puts you into four-wheel drive, improving traction at a slight cost in fuel consumption. “SPORT” sharpens throttle and transmission responses when you’re in the mood.

The XT6 Sport model has clutches in the rear half-shafts which can direct torque to either side of the vehicle as the situation warrants. It helps put some “sport” into Sport Utility.

All the tech you could ask for, and probably more.

Counsellor Hughes said he likes the head-up display to provide warning messages and SatNav information. I don’t like it, because your eyes should be looking well down the road, not at the base of the windshield. I couldn’t actually shut this one off, but I adjusted it so I could no longer see it. Annoying reflections in the windshield and from the centre dash screen suggest both should be better shielded.

Hughes finds the self-parking feature handy for snug downtown street parking spots. Every time I’ve tried these things, they have failed miserably. It’s available if you can and want to use it.

This vehicle had GM’s rear-view camera supplementing the conventional rear-view mirror which provides a wider field of vision. However, I am in the significant subset of the populace whose eyes cannot adjust fast enough to make this useful. The night vision? Now, that’s a treat. It will pick up people or animals well beyond the range of your headlights. Possibly a real life-saver. 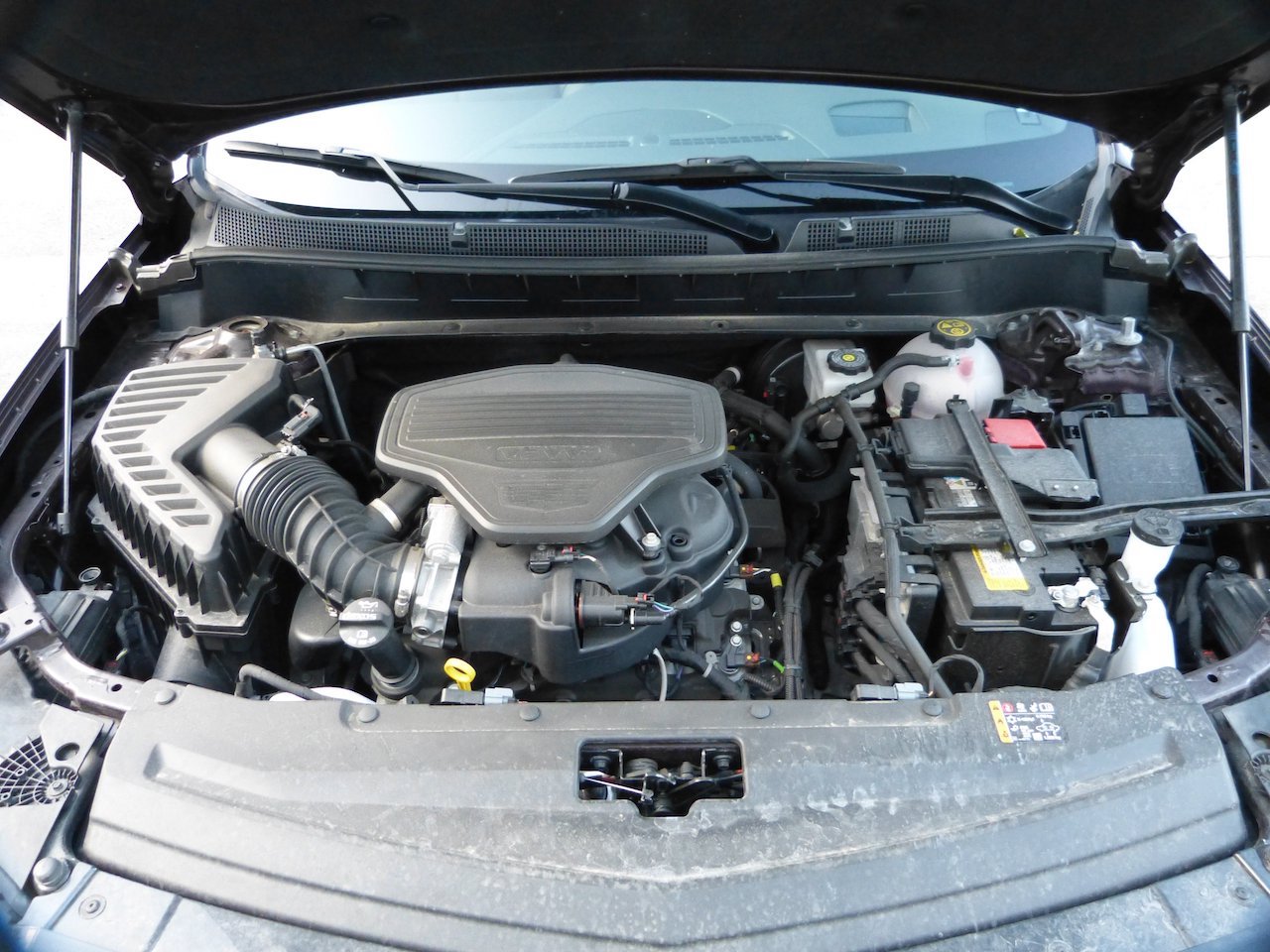 There is a host of additional camera views available for negotiating tight parking spots. Forward, behind, overhead, combinations thereof, these make manoeuvring this big vehicle much easier.

That said, the entire vehicle doesn’t drive as big as it looks, or actually is. This is largely a testament to the suspension technology.

One GM feature I think is clever is the warning system to tell you you’re maybe crowding that centre lane, failing to use your turn signals, or getting too close to that guard rail when reversing. Instead of beeping to all the vehicle’s occupants, it gently vibrates the seat cushion, so your transgression is kept your little secret.

Of course, I had to read about this in the Owners’ Manual ahem…

In sum then, the Cadillac XT6 offers an interesting combination of space, technology, elegance, and even a dollop of driving enjoyment.