Sometimes I feel like GM’s truck and SUV brand is like background scenery, the sort of stuff you notice as you zoom past on your way to somewhere else but don’t spend much time thinking about. These objects aren’t necessarily bad, but they often don’t make much of an impression either.

I think this feeling sticks in my mind because so many vehicles that wear the GMC badge are workhorses, designed for the dirty work that keeps our world together. I mean contractors, tow truck drivers and road maintenance crews need vehicles too, right?

They sure do, and there’s nothing wrong with GMC serving those markets. However, the brand also builds an impressive roster of vehicles for retail. Sometimes those trucks and SUVs aren’t fully appreciated, however, because they exist in other forms within the GM family, especially Chevrolet. Such is life for GMC.

The current second-gen Acadia was introduced in early 2016 as a 2017 model, but unlike its predecessor, the new model is significantly smaller but can still seat up to seven. Being 178 mm (7 inches) shorter, 102 mm (4 inches) narrower and approximately 318 kg (700 lb.) lighter enabled GM to move the Acadia to a smaller mid-size platform shared with the Cadillac XT5 and Chevrolet Blazer. 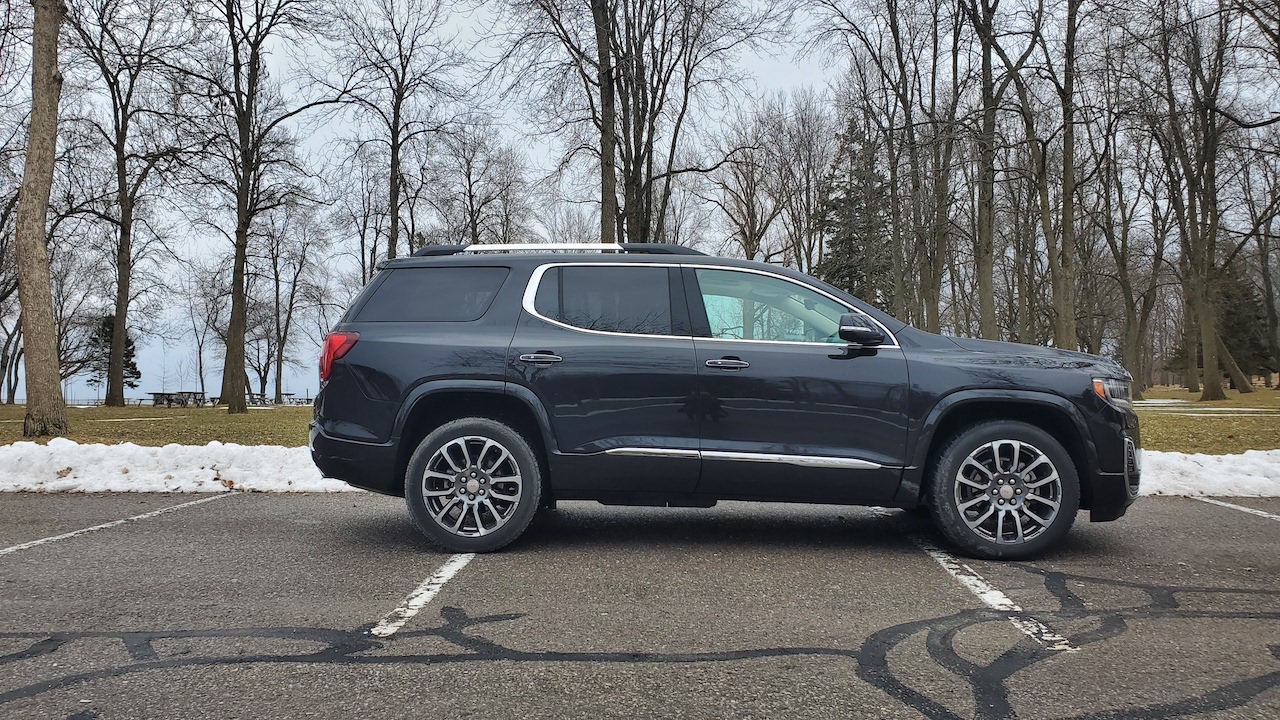 Like its predecessor, the second-gen Acadia launched with a 3.6-litre V6 (310 hp / 271 lb-ft.) and a new entry-level 2.5-litre 4-cylinder engine that produces 193 horsepower and 188 lb-ft. of torque. Both engines were paired with a 6-speed automatic transmission with either front or all-wheel drive.

While the Acadia’s 2020 updates are considered a mid-cycle refresh, the changes are extensive and go far beyond the surface changes these updates normally entail.

The most obvious difference is an exterior design update that includes new standard LED headlights, grille, front and rear fascias and GMC’s signature C-shaped lighting. On the powertrain front, the 6-speed automatic has been replaced with a 9-speed autobox, and a 2.0-litre turbocharged 4-cylinder (230 hp / 258 lb-ft.) is standard on the SLT. The 2.5-litre four powers the entry-level SLE, while the V6 is standard on AT4 and Denali trims. 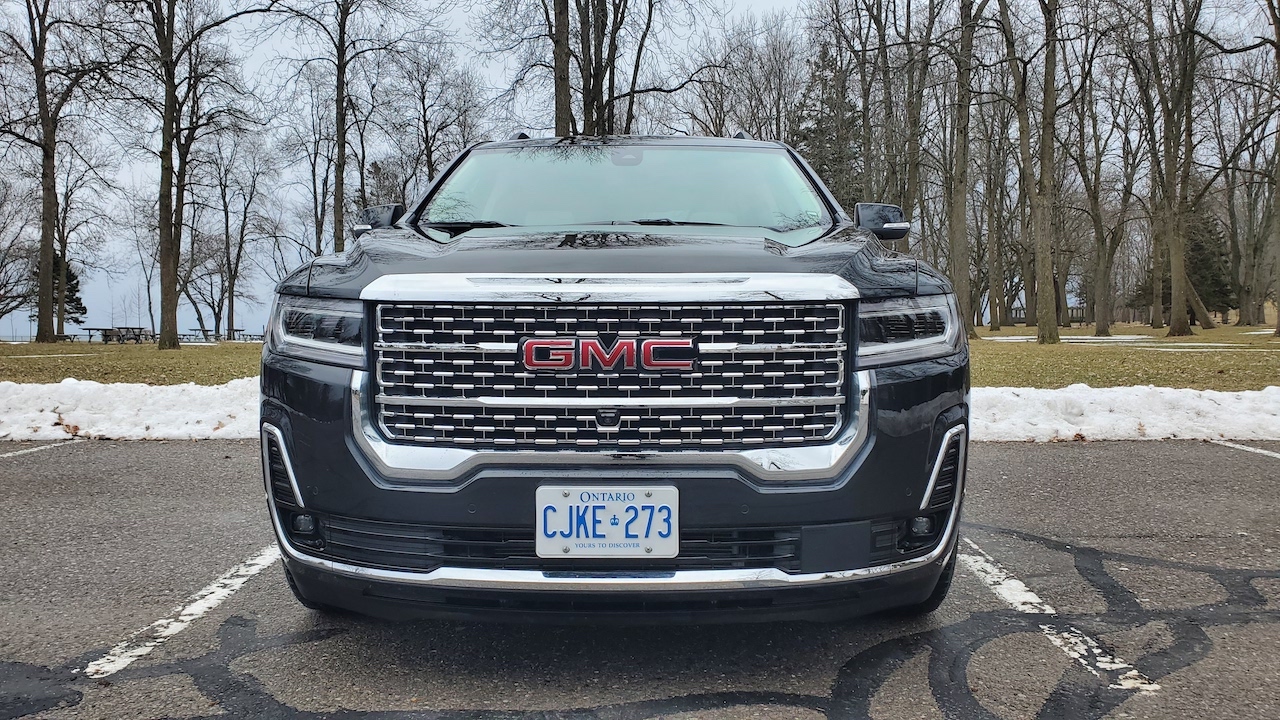 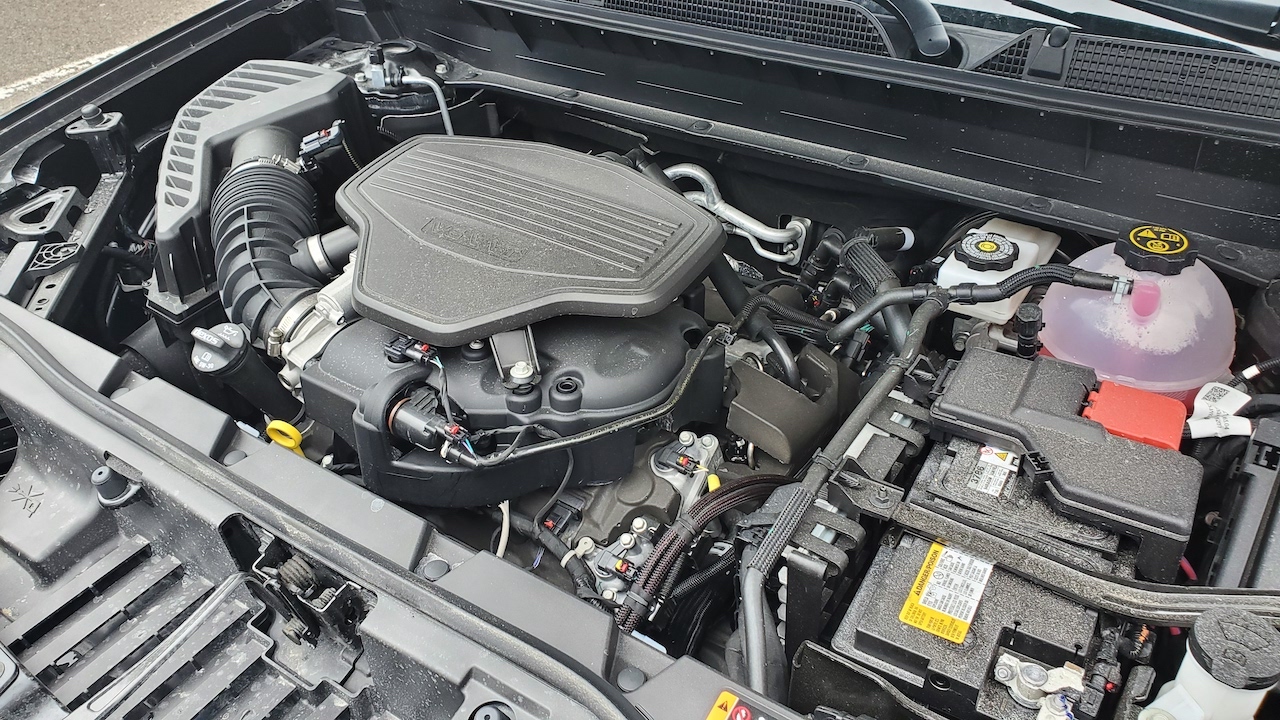 Speaking of the AT4, it joins the Acadia range as a fourth trim option, and comes with a unique grille, wheels, badging and black chrome exterior accents. It slots below the Denali and above the SLE and SLT.

Inside the cabin, the Acadia receives an Electronic Precision Shift unit that replaces a traditional gearshift lever for more storage space in the center console area. Other interior changes include an updated GMC infotainment system with new features and customization, new head-up display and rear camera mirror.

More luxe than you think 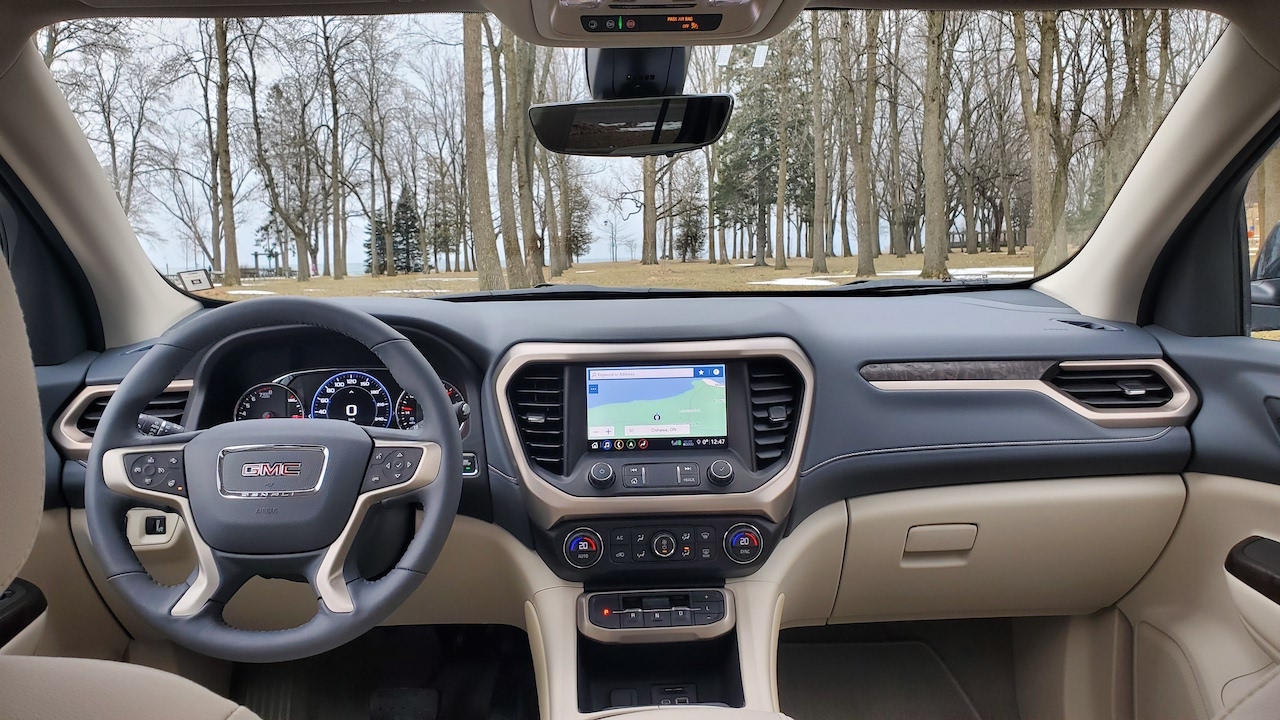 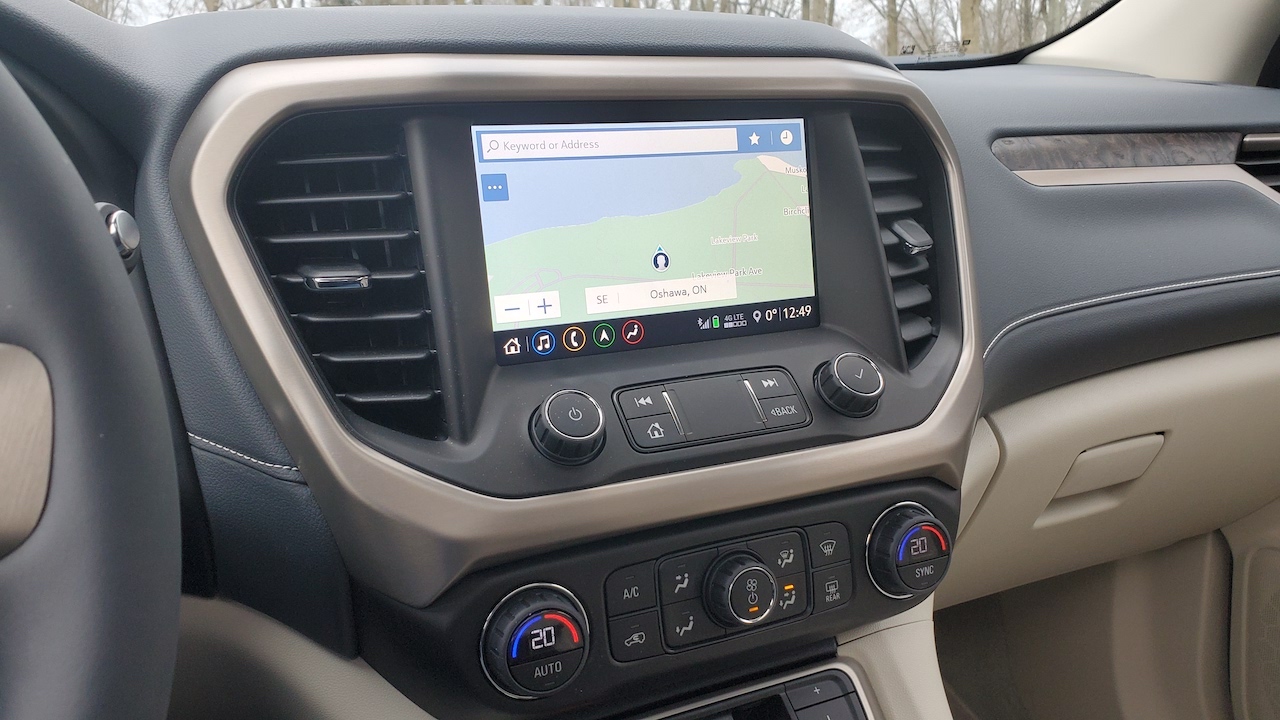 Generally, the Acadia Denali’s cabin offers a high degree of comfort, with a pleasing mix of leathers, plastics and wood accents that convey a sense of craftsmanship and refinement. The only blemishes are some rather cheap looking plastic trim inserts in the dash, and hard plastic below the steering wheel, on the glove box cover and lower door panels. On the plus side, they’re mostly below the eyeline.

More impressive to these eyes are convenience items like the wireless smartphone charge tray, storage bins below the center console, easily accessible hard keys for the heated steering wheel and seat climate controls and horizontally oriented cupholders. These details can annoy over time if not executed properly, so good on GMC designers for getting them right.

The Acadia Denali acquits itself well in everyday driving situations. The 3.6-litre V6 is smooth and responsive off the line, but also has enough power in reserve for easy passing on the highway and through city traffic. The 9-speed automatic shifts smoothly and keeps the engine operating mostly between 2,000 and 3,000 rpms. The ride is composed and reasonably quiet in regular driving conditions, and its handling feels secure.

In terms of driving modes, there are five: 4×4, 2×4, Sport, Off-road and Trailer tow (if equipped). During the drive window, I kept my tester toggled mostly to regular 2WD mode as the weather didn’t co-operate with a huge amount of snowfall for 4WD testing. When I used it briefly, traction and stability were notably improved although I should note my tester is also equipped with winter tires. 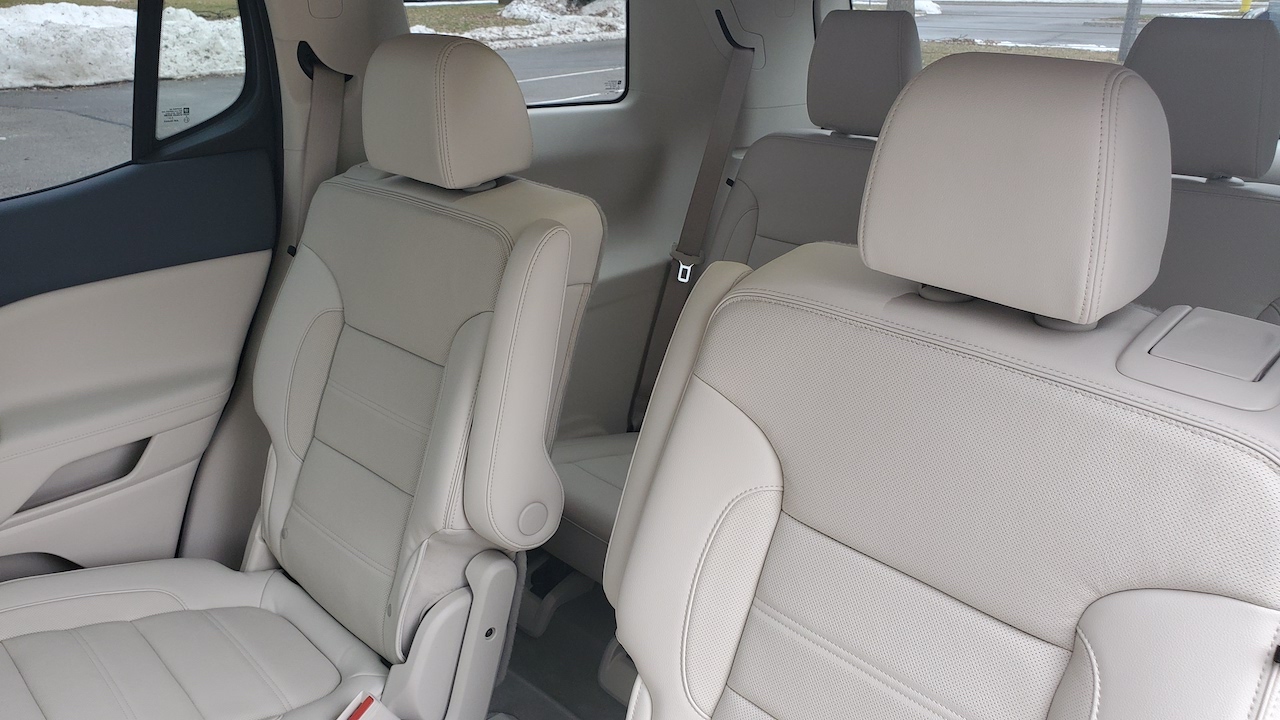 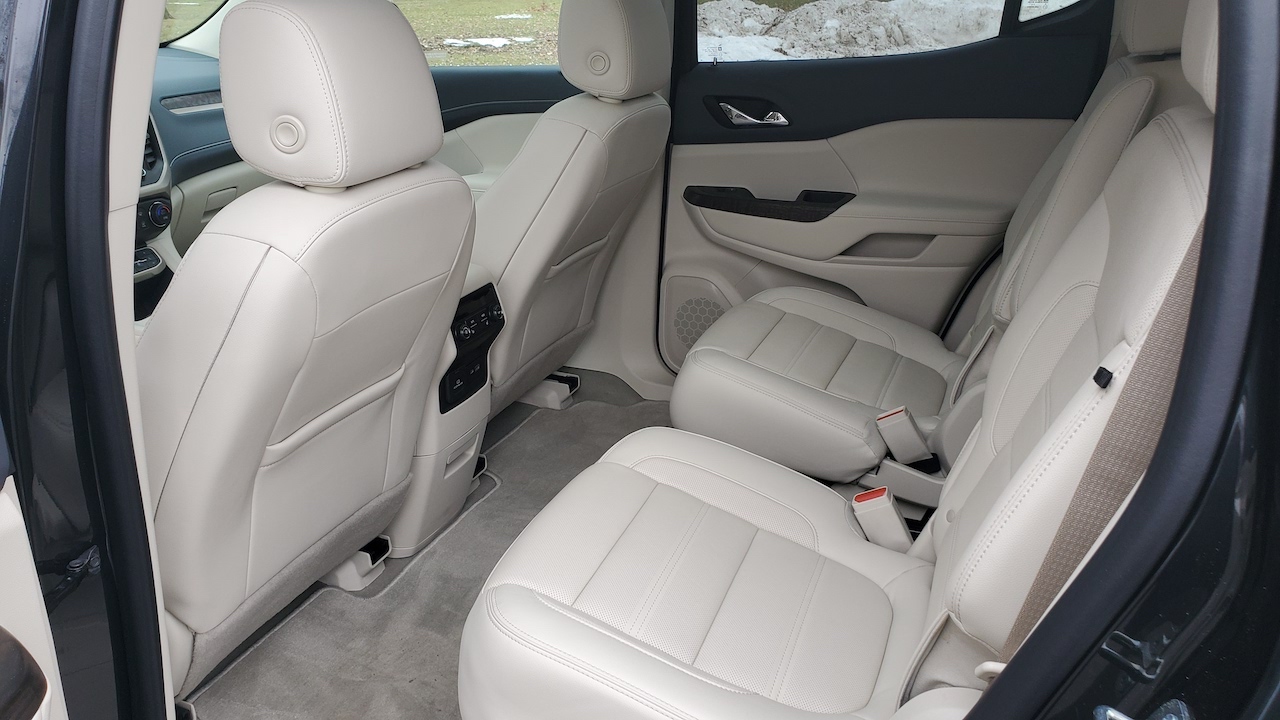 I also sampled Sport briefly, just to get a sense of sharper throttle response from the V6, which feels like sport mode in a lot of similarly equipped SUVs I test. Quicker, but not worlds apart from the regular drive mode. One other note about modes, when equipped with the trailer tow package, the Acadia Denali can tow up to 1,814 kg (4,000 lb.). As for fuel efficiency, I averaged 9.8L/100km during my test which is very impressive, although that number is skewed somewhat from extensive highway driving during a run to Detroit and back.

The updates the 2020 GMC Acadia Denali has received makes an already good option even more compelling in a very crowded mid-size SUV segment. With seating for up to seven, along with the ability to tow more than 4,000 lb. when properly equipped, and its loads of tech and smart design features, it wouldn’t be a surprise to see an uptick in Acadia sales in Canada (4,357 sold in 2019). 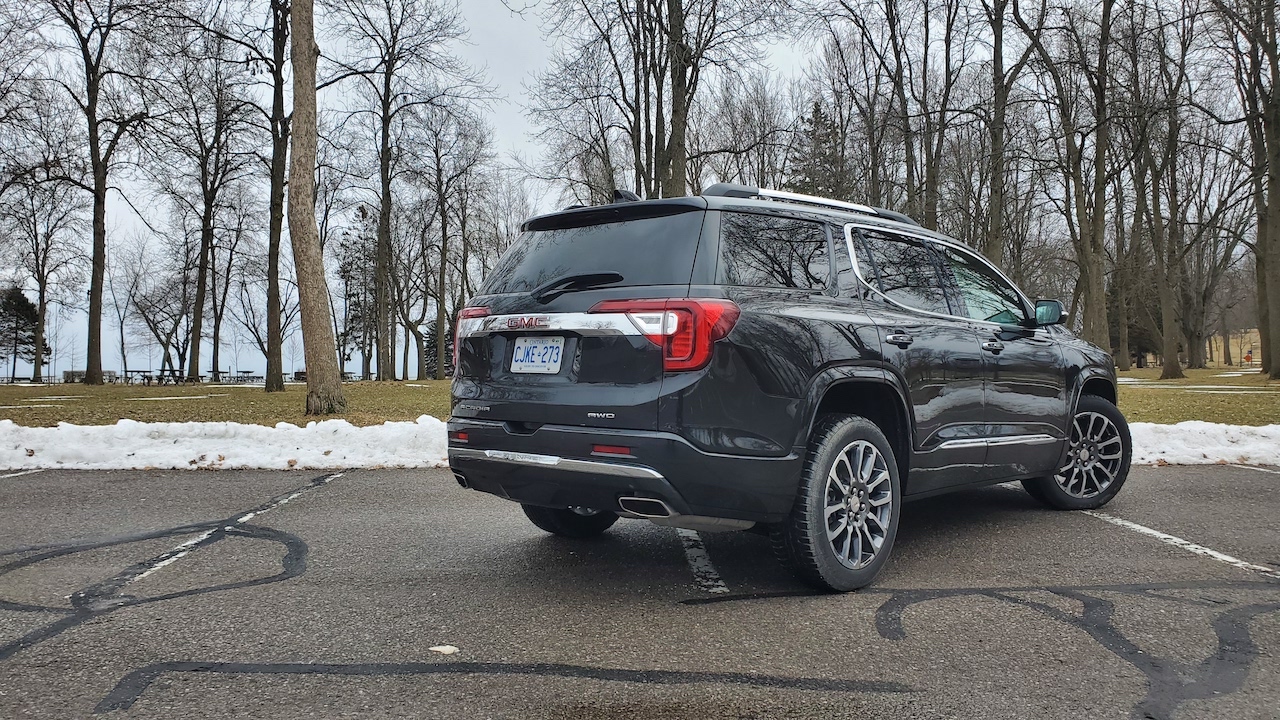 The starting MSRP of $53,198 is reasonably steep, however, and as my test vehicle proves, it’s not difficult to push the transaction price close to $60,000 by selecting an option package or two. Of note, the similarly equipped Chevrolet Blazer RS and Ford Edge ST both undercut the Acadia Denali by more than $5,000, which could hurt the GMC when its being cross shopped.

So, while a price near $60K is a bit much for a non-luxury marque in a very competitive segment, I think GMC has done a good job of broadening the Acadia’s appeal with its 2020 updates. It is, at the very least, worthy of consideration for those shopping for a mid-size SUV.