Diesel power was dealt a blow by various companies playing fast and loose with emissions regulations.

But given that the biggest blow to the environment for any vehicle is the manufacture of it, the most environmentally friendly vehicle is the one that lasts the longest. Diesel engines win easily here, because they typically last twice as long as gasoline engines. So the smarter car companies are sticking with Rudolf Diesel’s invention. No arguments from me.

Case in point: the GMC Sierra AT4 full-size pick-up.

Now, being a Diesel, it gets great fuel economy. Why would anybody who can afford a seventy-five grand truck care about saving fuel? Well, nobody ever got rich throwing money away. The AT4 designation is GMC’s second “sub-brand”. The first, Denali, has been phenomenally successful, aiming at pure “luxury”.

AT4 is pitched at off-roaders, with a darker, more sinister appearance, bright red tow hooks front and rear, uprated suspension and more rugged tires, all aimed at superior go-anywhere capability. 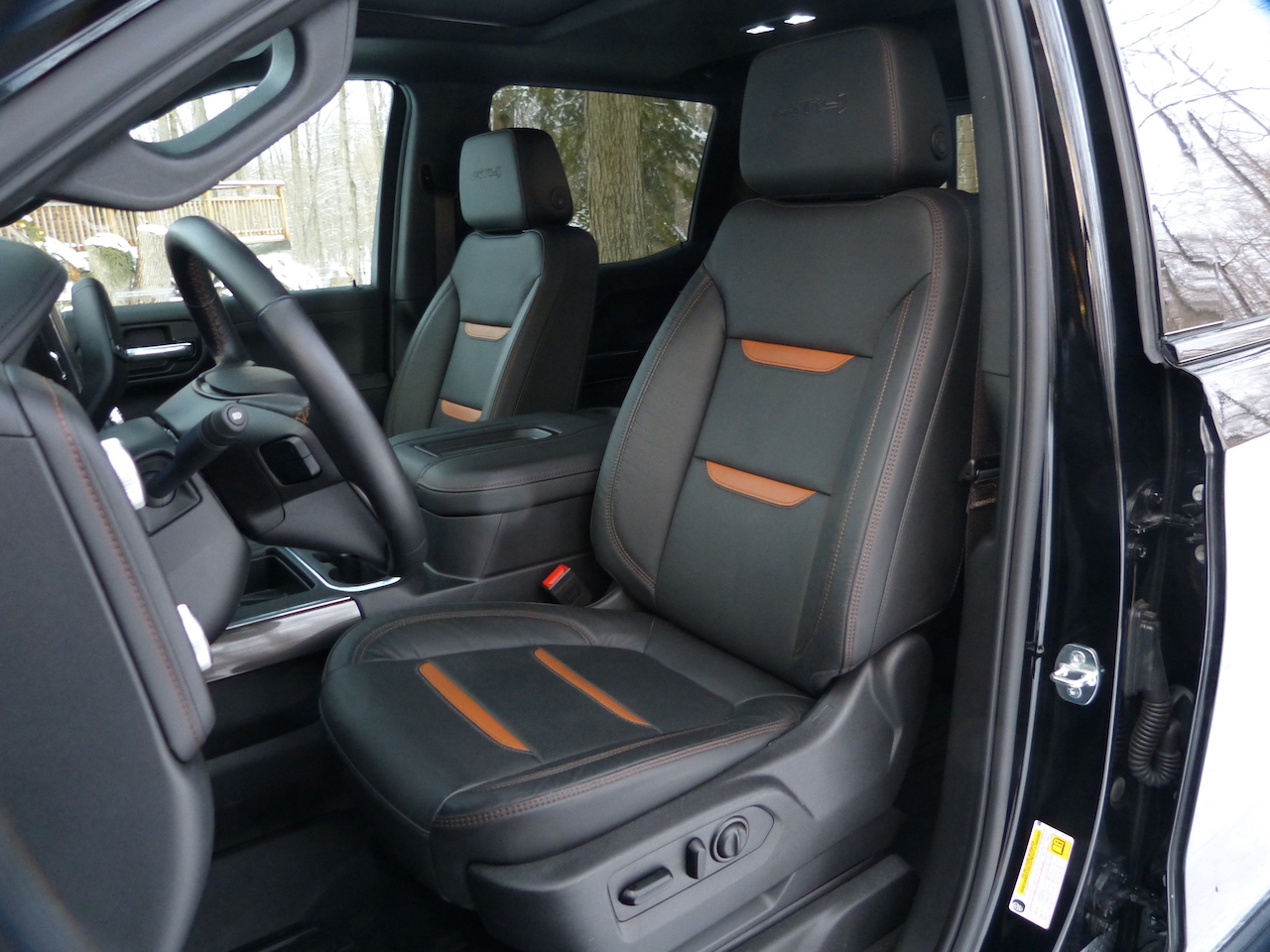 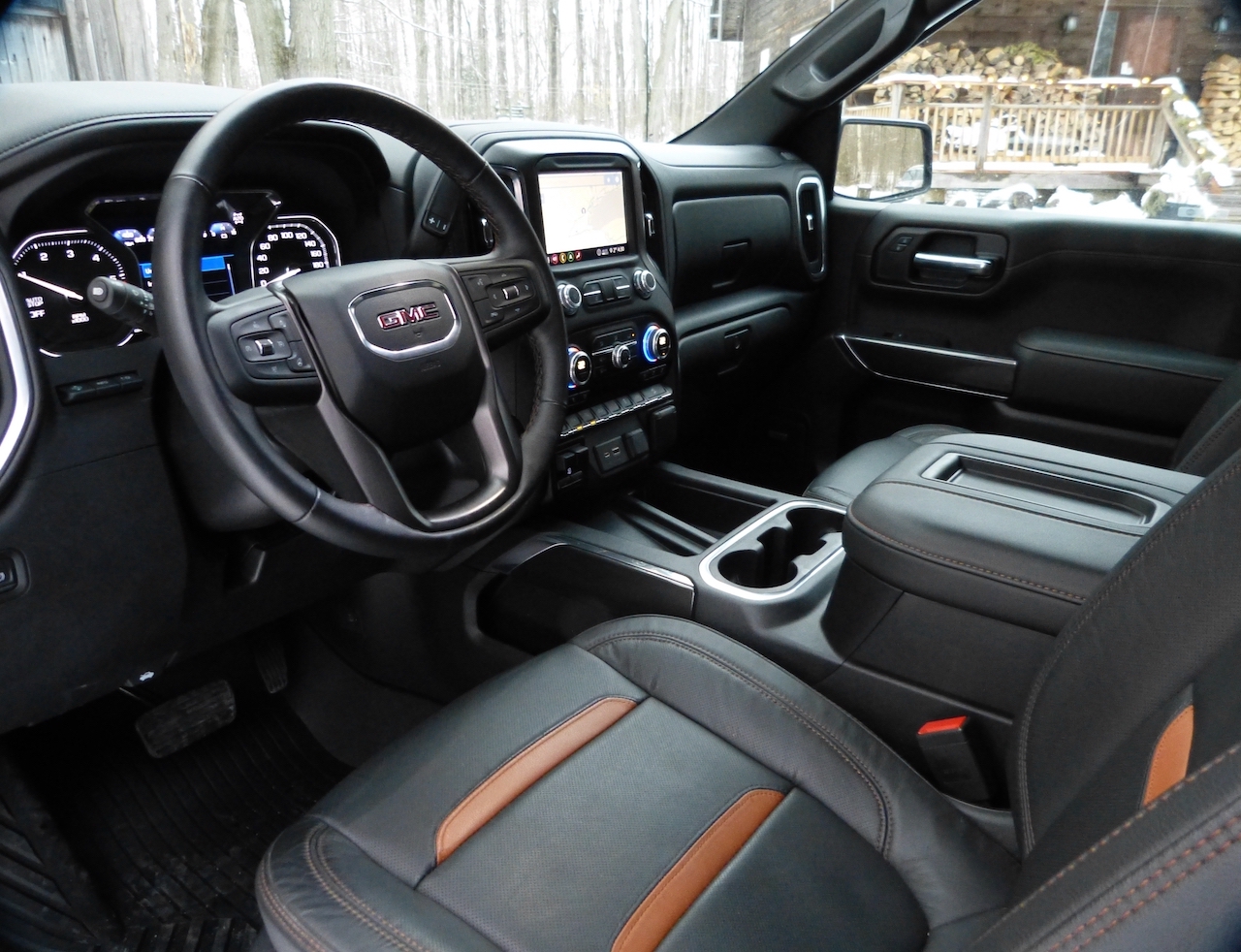 As noted, my tester had GM’s 3.0-litre turbo-Diesel engine. It’s an inline six, so is inherently balanced for smooth operation. It produces 277 horsepower at 3,750 r.p.m., and a healthy 460 lb-ft of torque at a low 1,500 r.p.m. By compression ignition standards, this engine starts quickly – a 0°C. cold start took less than three seconds, quicker than I could buckle my seat belt.

By those same standards, it’s impressively quiet, at least from inside. Outside, there is some of the characteristic Diesel rattle. People will know you’re coming, but compared to my old Diesel Suburban, it’s a library in there. That good low-end torque gets you off the line quickly, and the smooth-shifting ten-speed automatic transmission means you can generally keep the revs under three grand.

Once you’re up to speed, the blocky-treaded Goodyear DuraTrac off-road tires make more noise than the engine. The stiffer suspension also costs in ride quality, making the AT4 a bit harsh on our pock-marked roads. The electric power steering provides good feel with enough heft to know you’re actually in command.

A “Drive Mode” knob sits on the dash to the left of the steering wheel. Crank it to the right to successively select Normal, Sport, or Off-Road settings, which changes various system responses to suit.

Frankly, I didn’t detect much difference between the first two, although the transmission holds onto gears longer before upshifting in Sport. I didn’t run the AT4 off-road, but I know from previous experience that it will go places you would not believe. There is also a pair of gauges to show you how steep and how “leaned over” you are.

If you crank that Drive Mode knob to the left, you get “Tow/Haul”, which calibrates things for towing a heavy trailer. This also enables trailer brake control and hitch alignment assistance when hooking up. The interior of the AT4 looks pretty much like all big GM trucks, with good looking quality, readable gauges, easy to reach controls, and a head-display that I was able to shut off. In front of the driver is the tachometer to the left, the speedo to the right, and four smaller gauges between them, for oil pressure, coolant temperature, fuel level, and battery voltage. 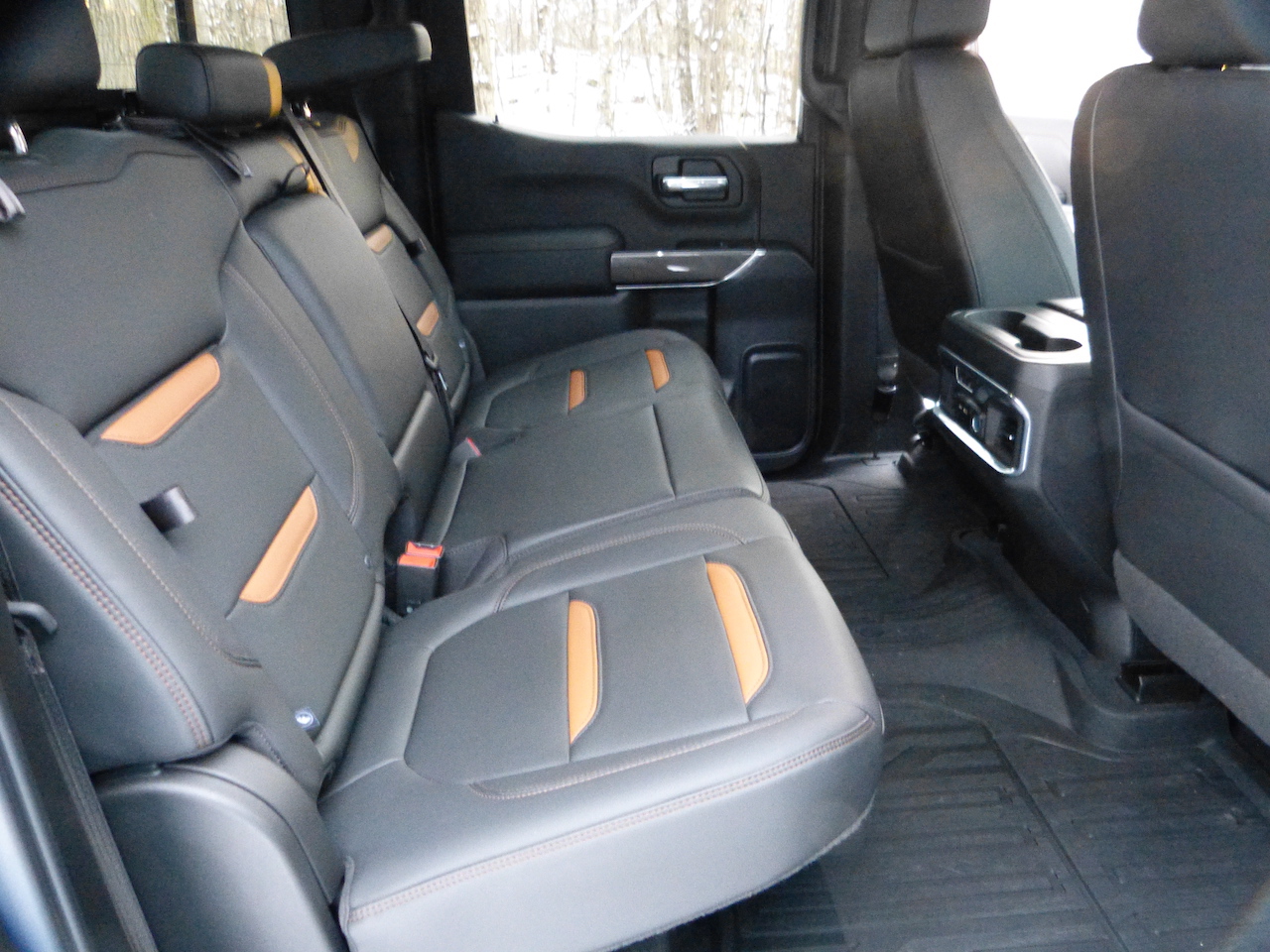 Many functions can be operated via the bright clear central screen, but many are also replicated with proper knobs or buttons. My guess is that a lot of off-roaders wear gloves that might not work with touch screens.

AT4 has all the tech you could want, and probably more, including Apple CarPlay, Android Auto and Amazon Alexa, Sirius XM radio with a three-month free trial, USB A and C plugs, 12- and 120-volt outlets in the dash, plus built-in WiFi. Oddment storage is handled by a couple of open bins in the centre console, a massive covered central bin, and two glove boxes. Two cup holders too, of course.

The seats were upholstered in perforated leather, dark grey with orange accents. Those colours were picked up on the dash and door trim panels. The rear seat has loads of legroom. The seat cushions can be folded up to create a massive indoor storage space; the jack and tools are also stored under there. Panels in the backs of the two outboard rear seats can be opened to create out-of-sight bins for valuables like wallets or house keys.

The front seats are heated and ventilated; the two rear outboard seats are heated. There is also a steering wheel heater (yay) but there are gaps in the coverage, notably at the “quarter to three” positions that is where your hands are supposed to be. Big grab bars are provided at all four corners to ease ingress and egress, and for passengers to hold onto if the driver is doing some particularly athletic off-roading.

Key among the options on my tester was the “Carbonpro” composite bed, which should stand up well to serious bashing. This may be the biggest single use of carbon fibre bits offered in any volume vehicle. Looks cool too. It better, since it costs nearly five grand extra. The tailgate is a multi-function affair. Its downward motion is damped, so it opens smoothly. Push another tab, and part of it can be folded down to make a step for access to the bed. Footholds moulded into the lower rear corners of the truck and a foldable handle on the side of the bed further assist getting up into the box. Tow hooks all over the place help secure your load.

Like all GM vehicles, this one fails the ignition off / headlights off test. But it passes the side-view mirror test; you can adjust them far enough out to eliminate the so-called blind spots. There’s a host of driver assistance features – like lane-keeping assist – which as usual I shut off. Emergency automatic braking I tend to leave on. Better to have it and not need it than need it and not have it. 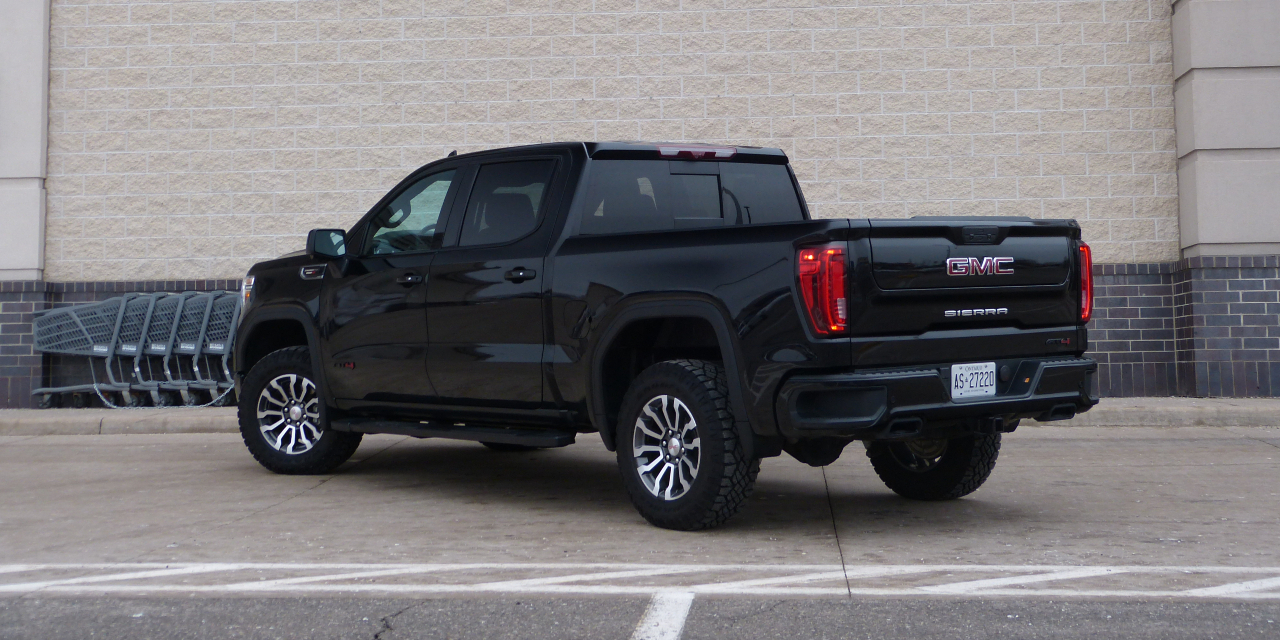 And the back-up camera has a wide variety of views, including a wide angle for when you have a trailer hooked on. There are also forward views available under certain conditions that can be helpful especially in tricky off-road situations.

And I like GM’s reverse warning system that vibrates your seat cushion instead of beeping, so nobody else in the truck knows.

The truck industry could build an entire year’s worth of vehicles and never build exactly the same truck twice. So it’s impossible for a reviewer to drive just one example and tell you everything you need to know. What I can tell you about the Sierra AT4 is that it’s a pricey but handsome and capable full-size truck which will go any place you could imagine, and more that you probably couldn’t.

The Diesel engine offers excellent performance. And, fuel economy – the best recorded in my truck was 7.4 litres per 100 km, which is stunning.

There are always compromises and in this case, ride quality and interior noise.

If those are deal-breakers, there are lots of options at your GMC store.