The Honda Clarity has now taken over the Volt’s position as the longest range PHEV sedan on the market.

I remember my tech department colleague’s excitement when he was in the market for a practical electric car for his family, and he received word that his Honda Clarity Plug-In Hybrid had finally arrived in mid-2018, its first full year on the Canadian market. He had also looked at the Nissan Leaf and Tesla Model 3, but those all-electric models had also just hit the market that year – the Leaf with its second generation version – and both of those were also in short supply.

He seemed open to make the technological leap to a full electric vehicle, but he was clearly happy that he wouldn’t have to with his white Clarity PHEV (plug-in hybrid electric vehicle), which he beamed would be able to cover his full commute on super cheap electricity, and not have to worry about taking his growing family on longer trips.

At the time, the Clarity’s refined road manners, healthy 77 km all-electric range and roomy interior made it the most practical of plug-in hybrids. Its official electric range didn’t quite measure up to the 85 km in the smaller and less refined second generation Chevrolet Volt, or the much smaller still but also pricier BMW i3 REx, which was and remains an electric vehicle first and foremost (203 km of AER now), but one that crammed a range-extending gas motorcycle engine under the rear of its carbon-fibre bodywork to combat the dreaded range anxiety of pure battery electric vehicles.

But now that the Volt has been discontinued, and the small BMW i3 city car remains more of an upscale technological showcase than family runabout, the Honda Clarity has now taken over the Volt’s position as the longest range PHEV sedan on the market. It’s still as roomy and comfortable as ever, one clearly built with a body to maximize efficiency in multiple ways.

Perhaps in too many ways.

Yes, we have to mention those rear wheel fenders up front. They don’t cover much of the rear tires, or any of the rims themselves. And yet, looking at the slanted bodywork that covers perhaps the top 10 per cent of the rear tires’ sidewall, it covers just enough to tell the world that stylish exterior design was not the Clarity’s main priority. 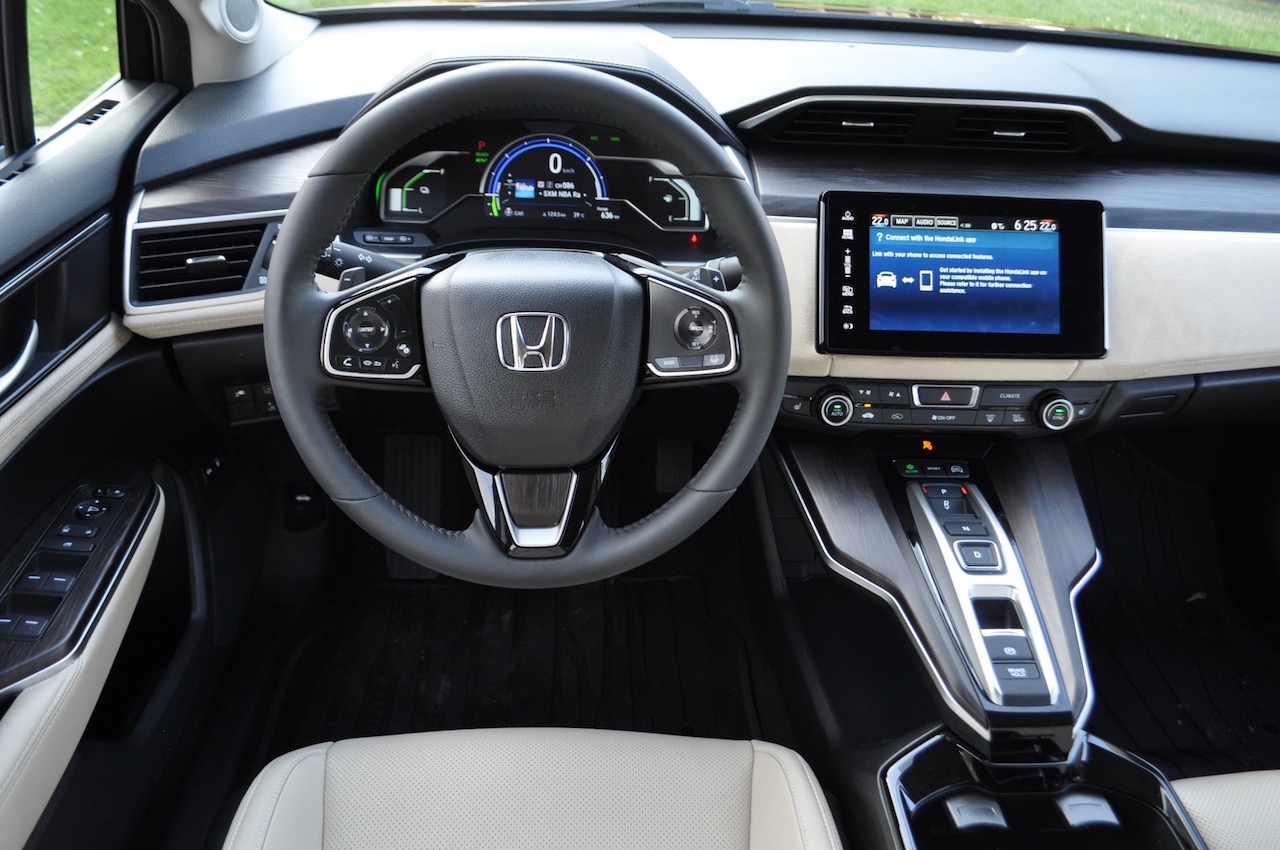 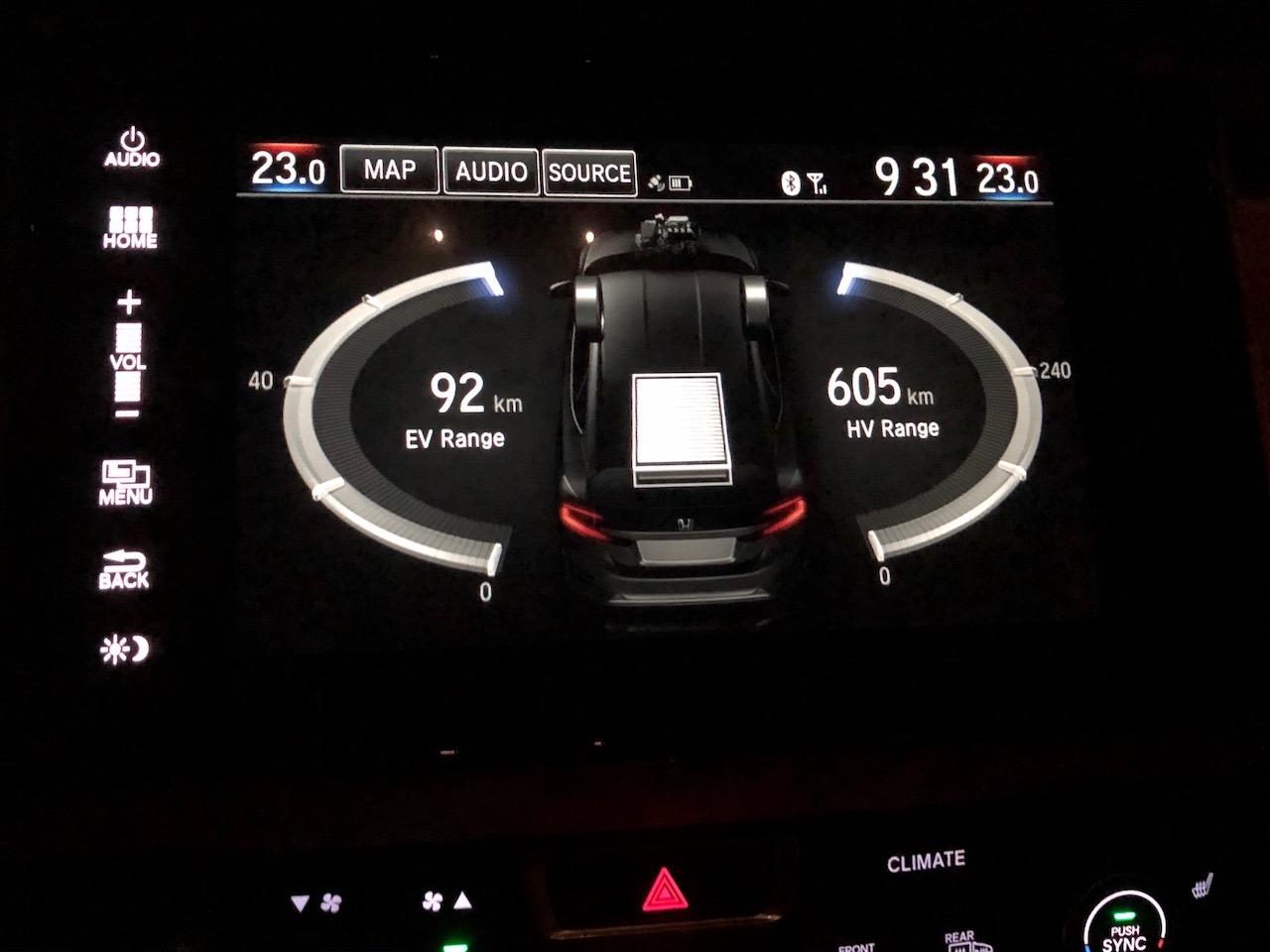 Clearly aerodynamic efficiency was key here, likely owing much to the fact that the Clarity was also designed to be offered in Fuel Cell and full electric BEV versions. The Clarity’s overall teardrop shape, air channels in the bodywork ahead of the rear tires, and unique aero-optimizing wheel design would help the BEV version in particular (though never sold in Canada) eke out much needed range from its comically tiny battery.

In a PHEV with plenty of electric range and a gas engine backup, it’s unquestionably overkill.

And yet there’s something admirable about Honda’s dedication to efficiency. Honda has a history as an engine company first and foremost, with engineering-led hybrids such as the original three-door Honda Insight hatchback that scandalously covered half of its rear wheels with fender covers that screamed aero function ahead of auto fashion. Looking at this here Clarity and its slightly oversized rear fender bodywork, there are whispers of that same battle, but in a much more subdued manner, in a larger and more comfortable mid-size vehicle, within a much larger and more conservative company overall.

Inside, the design motif is in keeping with the subdued futurism exterior theme, with a large storage area under a flat, almost floating transmission tunnel. There are shift buttons instead of a shift lever to choose your gears, with a large space available underneath this transmission ‘deck’ that’s useful for a purse, sunglass cases or cellphones, though sadly there’s no wireless phone charging pad available, even on this top-spec Touring trim. The only option on the top Touring model, besides dealer accessories and various warranty choices, were exterior metallic paint colours.

A velour-like fabric stretches across the dash and front doors that feels nice and high quality, but looks a little strange as a dash material. Still, there’s plenty of room for both front and rear passengers, who also have handy cell phone ‘pockets’ back there molded into the front seatbacks.

There’s unfortunately no sunroof option, which again seems somewhat unusual for a family sedan that starts at a hefty $40,990 for a base Clarity, though there are tons of welcome interior conveniences and safety aids: active noise control, heated seats, remote climate pre-conditioning, high- and low-speed active cruise control, lane-keeping assist, and various collision prevention (BRAKE warning) and mitigation systems. 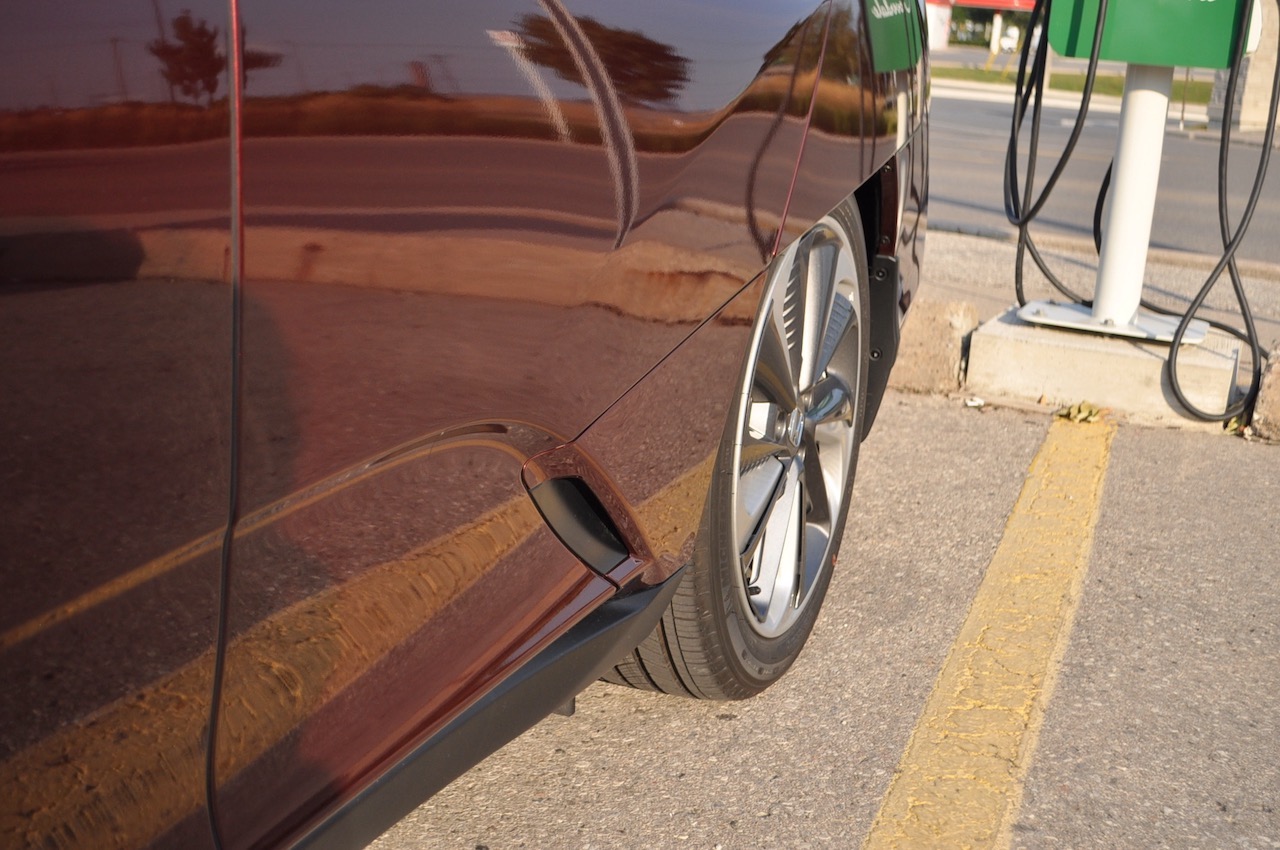 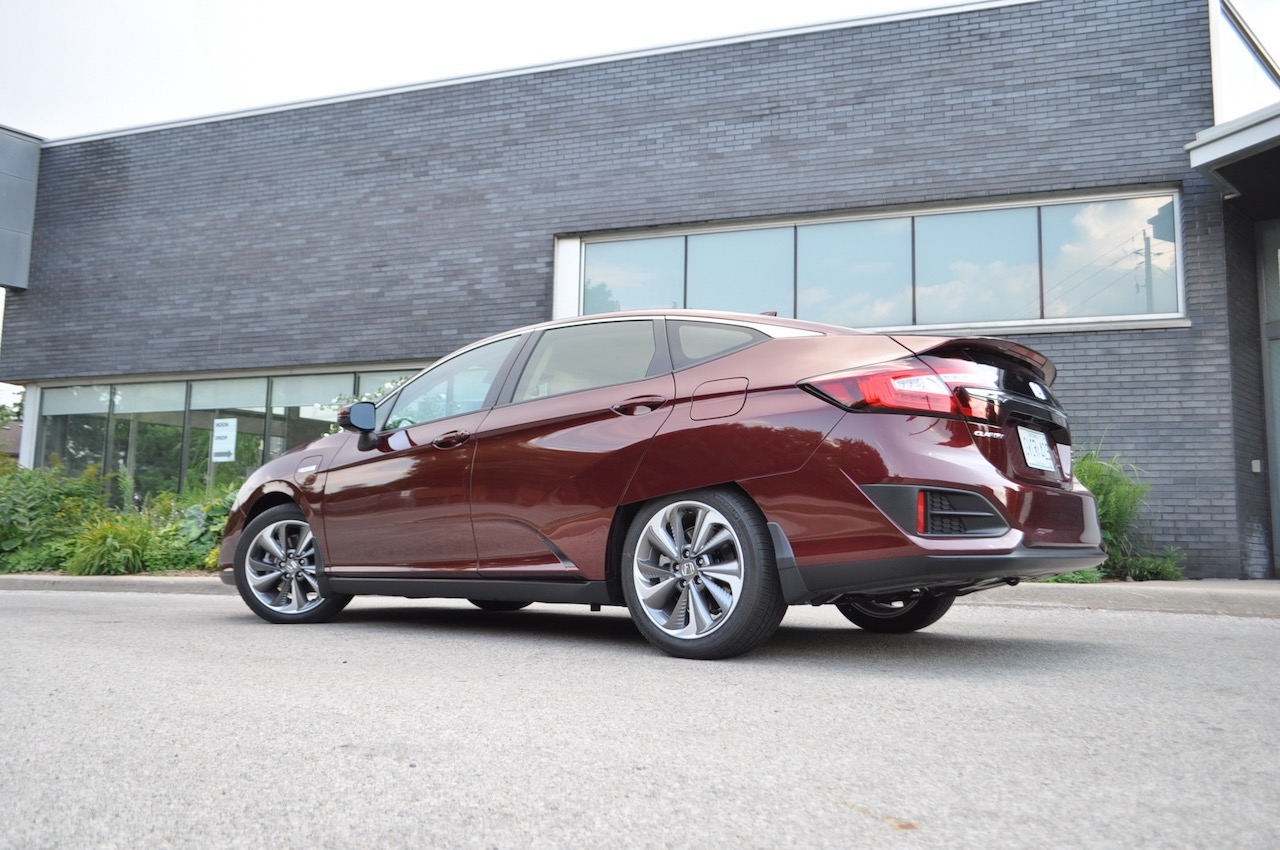 For another $4,000 north of there, the 2020 Touring adds features such as leather seats, a HomeLink garage door opener, a navi system, and satellite radio. Both come with Apple CarPlay/Android Auto as standard, as well as the handy ability to read your texts or emails to you.

From the driver’s seat, a charged-up Clarity is a serene place to be, with responsive if overall relaxed response from all but tromps on the accelerator, which kicks in the internal combustion engine to bring forth all 212 combined ponies of electric and ICE power. The engine is not loud compared to a regular Accord, but since it’s so quiet otherwise, it just hurts to hear it come to life.

There are three modes: Economy, Sport and Hybrid, accessible by three push buttons just above the transmission buttons. Sport mode really helps car feel sprightlier, where the engine comes on more quickly, while Econ is not surprisingly the opposite. Personally, I’d avoid Hybrid mode, as not only does it keep the engine on, it seems to revel in highlighting the motorboating gearing tendencies of the CVT, where the engine is unnecessarily revvy when you’re slowing down.

Using the left downshift pedal gives you some extra regeneration and provides some driving involvement, but unlike other systems, after you come to a stop, the regeneration is done, and you’re back to regular low-drag mode.

Not surprisingly, the Clarity’s mid-size family mission brings with it very comfortable suspension settings, as well as efficiency-focused tires. Not many buyers will expect razor sharp handling, nor receive it, but it’s certainly composed enough on highway ramps to outhandle many taller ‘sport’-utilities.

Value-wise, many mid-size sedans offer more space and similar features for a lower MSRP, so the Honda Clarity’s main calling card is that it now offers amongst the longest super-quiet electric range in the business for PHEVs, with plenty of family space for people and cargo, with available fuel savings and government rebates that will help lower its overall cost of ownership down to competitive levels.

So keep in mind the Clarity is eligible for the federal $5,000 rebate across the country, $8,000 in the province of Quebec, and $1,500 in B.C. incentives (but not ScrapIt!, which is for BEVs only now). It’s also worth noting that the little changed 2021 Honda Clarity will go up in price for 2021 significantly, with the top Touring to start at an MSRP of $48,505, from the $44,990 of this year’s Touring model, with little to no added equipment or upgrades planned.

In short, the 2020 Honda Clarity may feature a slightly bloated Dad-bod that may not be as sharp as some, but it proudly reflects both its familial obligations, and Honda’s history as an engineering focused company, first and foremost