Plenty of space and utility wrapped in aging packaging

I know 2015 wasn’t that long ago, but after spending a week in the Honda Pilot recently, it feels much more distant than I originally thought.

I mention 2015 because that’s when the current third-generation Pilot was simultaneously unveiled at the Chicago and Toronto auto shows as a 2016 model. At the risk of gross understatement, a lot has happened in the intervening five-and-a-half-years.

With respect to the Pilot’s three-row, seven-eight passenger SUV segment, new entrants have emerged, stem-to-stern redesigns have been rolled out and a boatload of advanced safety technology are now commonplace across manufacturers. I don’t want to suggest the Pilot has stood still during this time, but the current model is starting to show some age. Its relatively flat sales figures in both the U.S. and Canada appear to reflect that, despite Honda’s best efforts to keep it fresh.

Speaking of, the Pilot received significant updating for the 2019 model year with new bumpers, grille, wheels, standard LED headlights and updated taillights. Changes on the inside include a new instrument cluster, updated infotainment system software and new connectivity features, such as 4G LTE WiFi hotspot, CabinTalk from the Odyssey. A new volume knob for the stereo and standard Honda Sensing safety tech was also rolled out on all trims.

Six trims are available, ranging from base LX to range-topping Black Edition, a new grade for 2020. All models are powered by Honda’s venerable 3.5-litre V6 engine (280 hp / 262 lb-ft.) that is paired with either a six-speed (LX, EX, EX-L Navi) or nine-speed (Touring 7P, Touring 8P, Black Edition) automatic transmission. All-wheel drive is standard across the board and, as of 2021, all trims will be equipped with the nine-speed autobox. 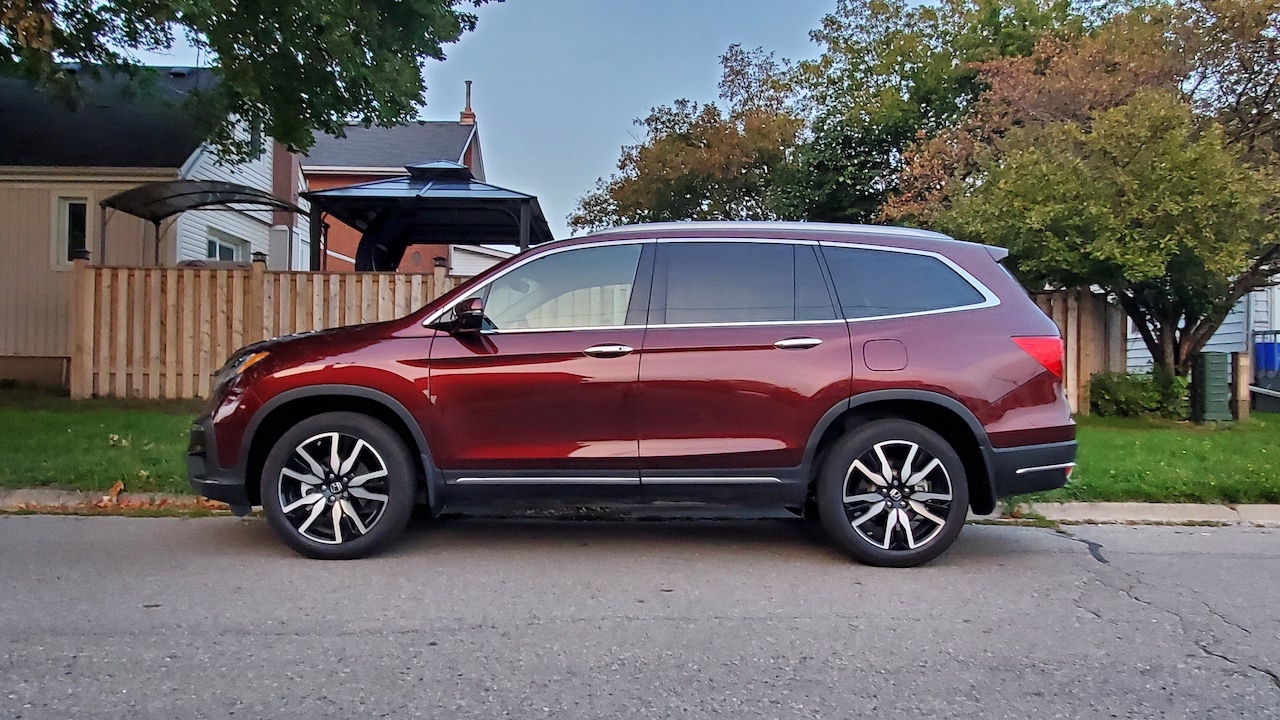 As one might imagine, the high degree of standard kit makes for a comfortable and quite luxurious ride, and despite its age the Pilot is a pleasing vehicle to drive particularly for long-haul cruising where the nine-speed keeps the V6 churning near 2,000 rpm.

The Pilot’s transmission has a sport mode, but performance is not the name of the game here. The 3.5 does offer plenty of grunt if you stomp on the accelerator, and the sport setting bumps engine revs and allows them to build before upshifting, but it feels out of place in an eight-passenger SUV. I doubt many Pilot owners use sport mode much at all, but it is there if you please.

During my test, the transmission was mostly in regular drive and I found performance to be adequate, if not exciting, but it should meet the needs of most buyers in the segment. In mixed city and highway driving, the Pilot offers a well-balanced ride, with steering and handling that feels responsive for a three-row SUV.

Body lean during cornering is a fact of life for big SUVs with high centres of gravity, but the Pilot didn’t feel any worse than competitor vehicles I’ve driven. The ride is also reasonably quiet thanks to an acoustic windshield, acoustic glass in the front doors and active noise cancellation.

To these eyes, the Pilot’s biggest strengths are comfort, space and utility. In addition to a large console storage bin and cup holders for all three rows, the third row folds completely flat, which boosts cargo volume from 524 to 1,583 litres. The cargo floor behind the third row also contains a rectangular storage compartment for separating objects and keeping them out of sight.

Given the Pilot’s appeal to families, Honda has wisely chosen to load it with connector ports. To wit, my tester comes with three 12-volt outlets, one 115-volt outlet and four USB connectors. Another family-friendly feature is a rear entertainment system with a 10.2-inch screen and Blu-Ray player, standard on Touring and Black Edition models. And if towing is a purchase consideration, the Pilot can be equipped to tow up to 2,688 kg (5,926 lb). 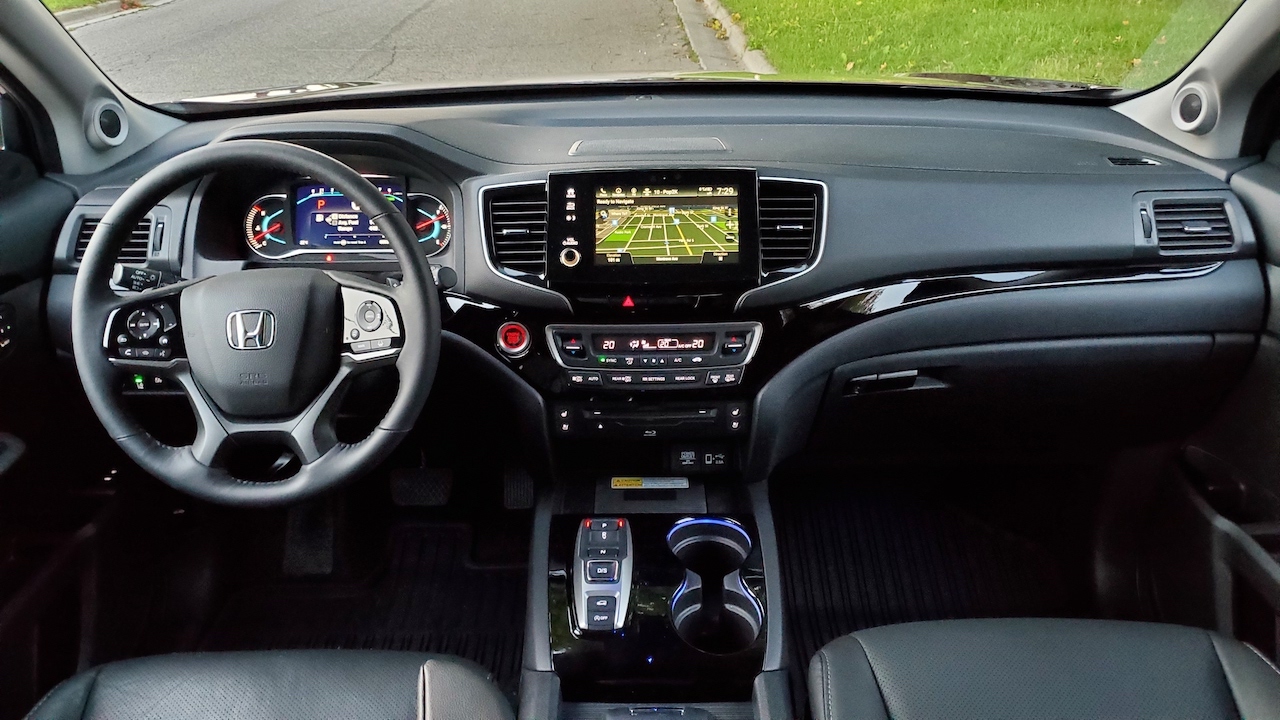 So, there’s a lot to like here. But as I mentioned at the top, the Pilot’s age is noticeable. Its exterior is handsome, but also somewhat bland and non-descript compared with new entrants from Hyundai (Palisade) and Kia (Telluride), along with an all-new model from archrival Toyota (Highlander).

While the cabin has plenty of space, even in the third row, and utility, it feels dated from a design and construction perspective. I concede my tester’s monochromatic black interior doesn’t help matters, but even a two-tone treatment doesn’t offset a small infotainment screen and a rather ho-hum instrument cluster and dash panel layout. The blue outline around the front cup holders looks cool at night but the interior lacks pizzazz otherwise.

I realize these critiques are subjective, and many Pilot intenders may not care about its aging aesthetic, but given heightened competition within the segment, they could carry some weight. Until a next-gen model arrives, Honda’s hopes ride on the current Pilot’s many charms outweighing its advancing age. As time goes on it may be too much to ask. 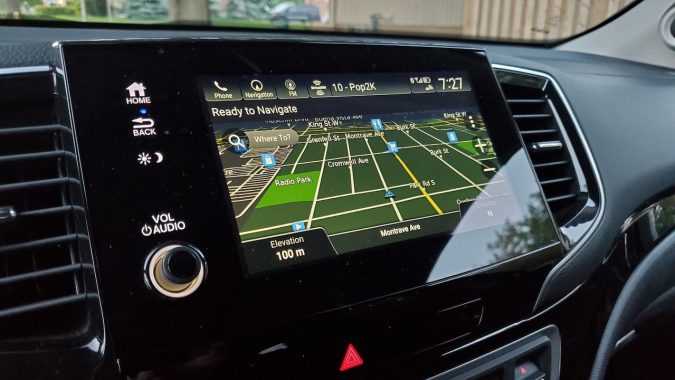 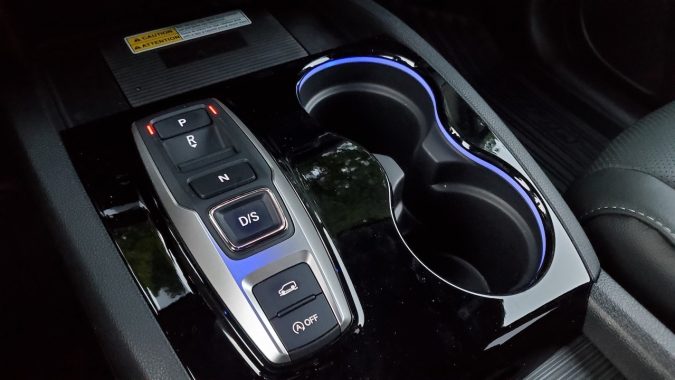