I find it difficult not to stare at the F-Type. Consider it rude, if you will, but my feelings towards this gracefully styled specimen of automotive design haven’t changed in over 7 years. From the concept to the initial Paris reveal, Ian Callum’s F-Type tickled parts of my soul I didn’t even know were there.

Sports cars need this sort of reaction from the public. There’s no other reason for them to exist other than to evoke strong feelings of desire emerging from deep within the amygdala. Like the first time your 10-year-old self saw a Lamborghini in the flesh and your knees buckled.

While the Jaguar F-Type is not an exotic, its sultry shape will make you think it is and it can just as easily weaken knees.

Now, if you’re not an enthusiast, and your car purchasing decisions boil down to which milquetoast crossover offers the best shade of beige, an F-Type will be as familiar to you as the pronunciation of Huayra.

But even if you don’t know much about this car one look at its long clamshell hood, stubby, pinched rear deck, and voluptuous hips will imprint itself in your mind. My personal favourite angle to gawk look at it is the rear three-quarter view where the raked liftback converges with slim, horizontal wrap-around taillights and centre exhaust tips forming what is one of the nicest rear ends in all of automobile-dom and a perfectly realized modern-day interpretation of the legendary Jaguar E-Type.

So as a bedroom wall poster it works, but is there any substance under that masterfully penned body? 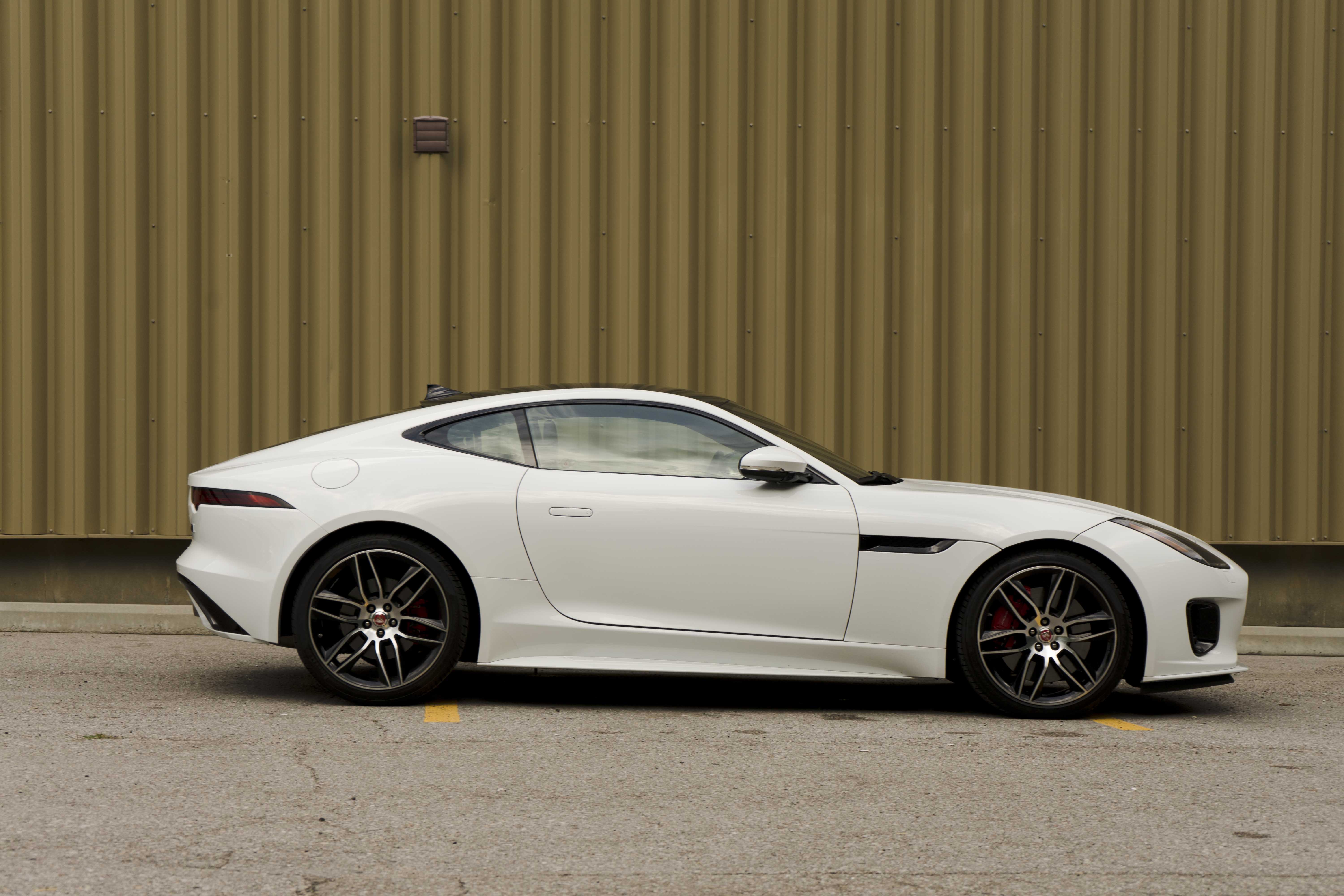 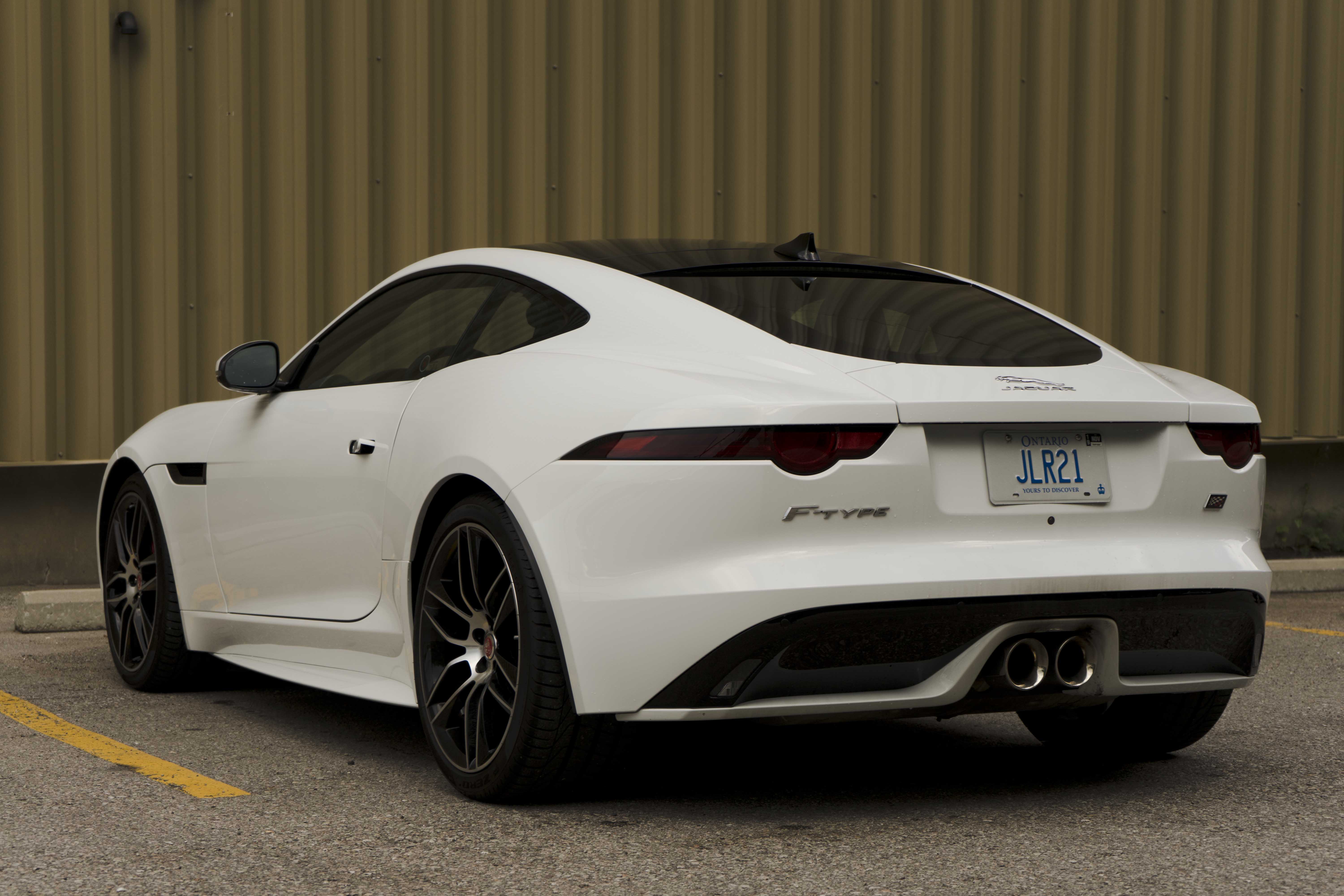 Mechanically not much has changed since the first F-Type hit the streets as a 2-seat, rear-wheel drive convertible with a lightweight aluminum chassis and body. Shortly after, a coupe version was released. And in 2016 the F-Type got all-wheel drive as an option and it became possible to specify a 6-speed manual transmission if you chose the V6. A turbocharged 4-cylinder was added in 2017, which meant the F-Type could be ordered with a boosted 4, 6, or 8-cylinder powerplant. The range-topping SVR gets a 5-L supercharged V8 making 575 hp and will propel the British sports car to a top speed of 322 km/h. Sadly, Jaguar ended up dropping the manual for 2020 as very few people actually ordered one that way.

And that brings us to the car you see here: a 2020 Jaguar F-Type Checkered Flag Coupé. A special edition package meant to commemorate 70 years of Jaguar sports cars going back to the 1948 XK 120.

It starts with an R-Dynamic Coupe or Convertible powered by a 3-L supercharged V6 sending 380 hp and 339 lb-ft of torque to all 4 wheels via an 8-speed ZF-sourced automatic transmission. To that it adds extended rocker panels and 20-inch wheels with a two-tone gloss black finish, gloss black trim, and bright-red brake calipers. Since you can add most of these things to an F-Type R Dynamic there’s really not much to visually distinguish this special version from the outside, other than two small Checkered Flag badges on the front and rear bumpers. Making this quite the pricey appearance package, that no one is going to know you paid a premium for.

It’s a similar story on the inside with flags embroidered on the headrests, illuminated sill plates, red seatbelts, and red contrast stitching (also available with grey contrast stitching) on the seats and dash nicely matching those brake calipers. There’s also a flag on the steering wheel’s bottom spoke and a red stripe top dead centre. 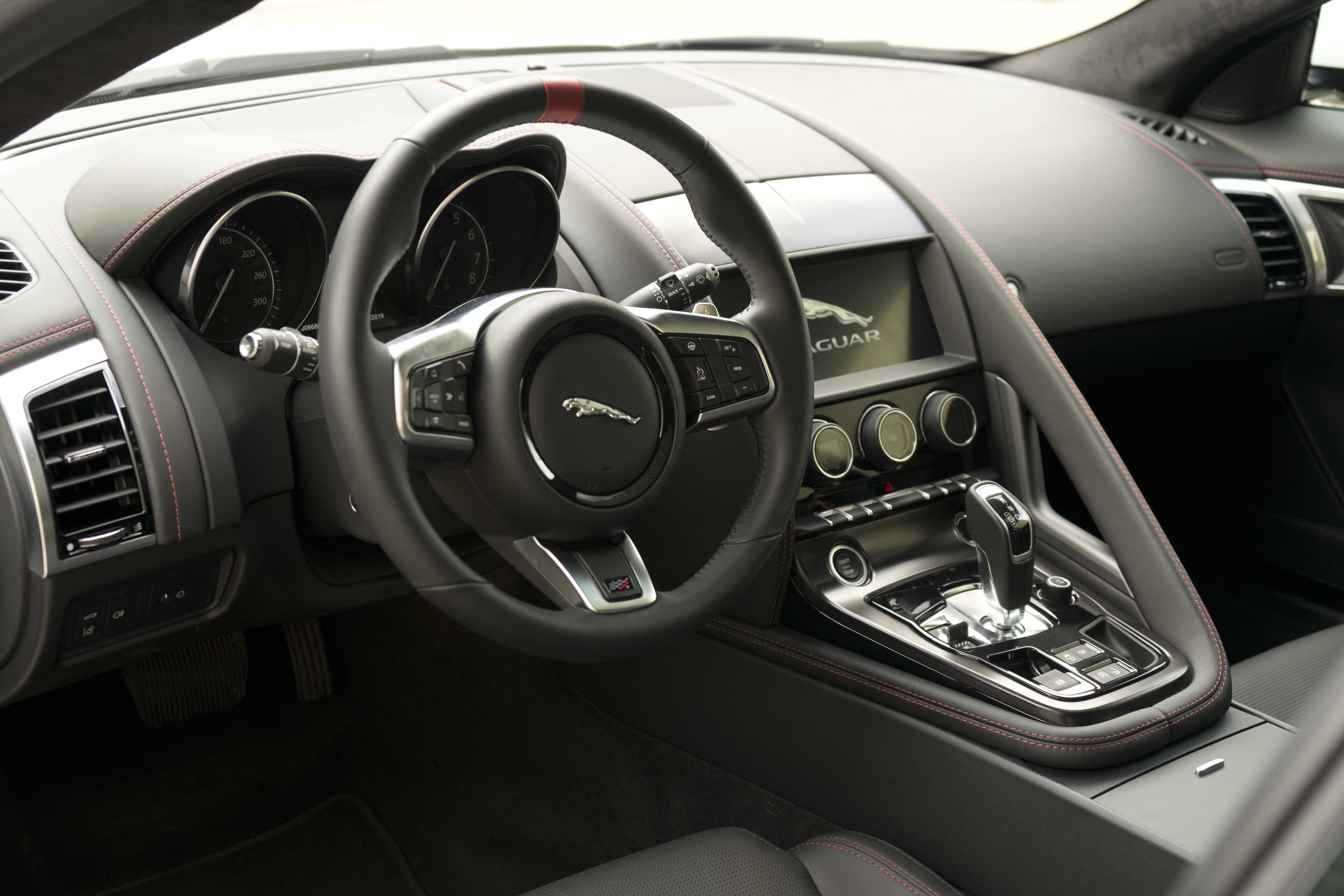 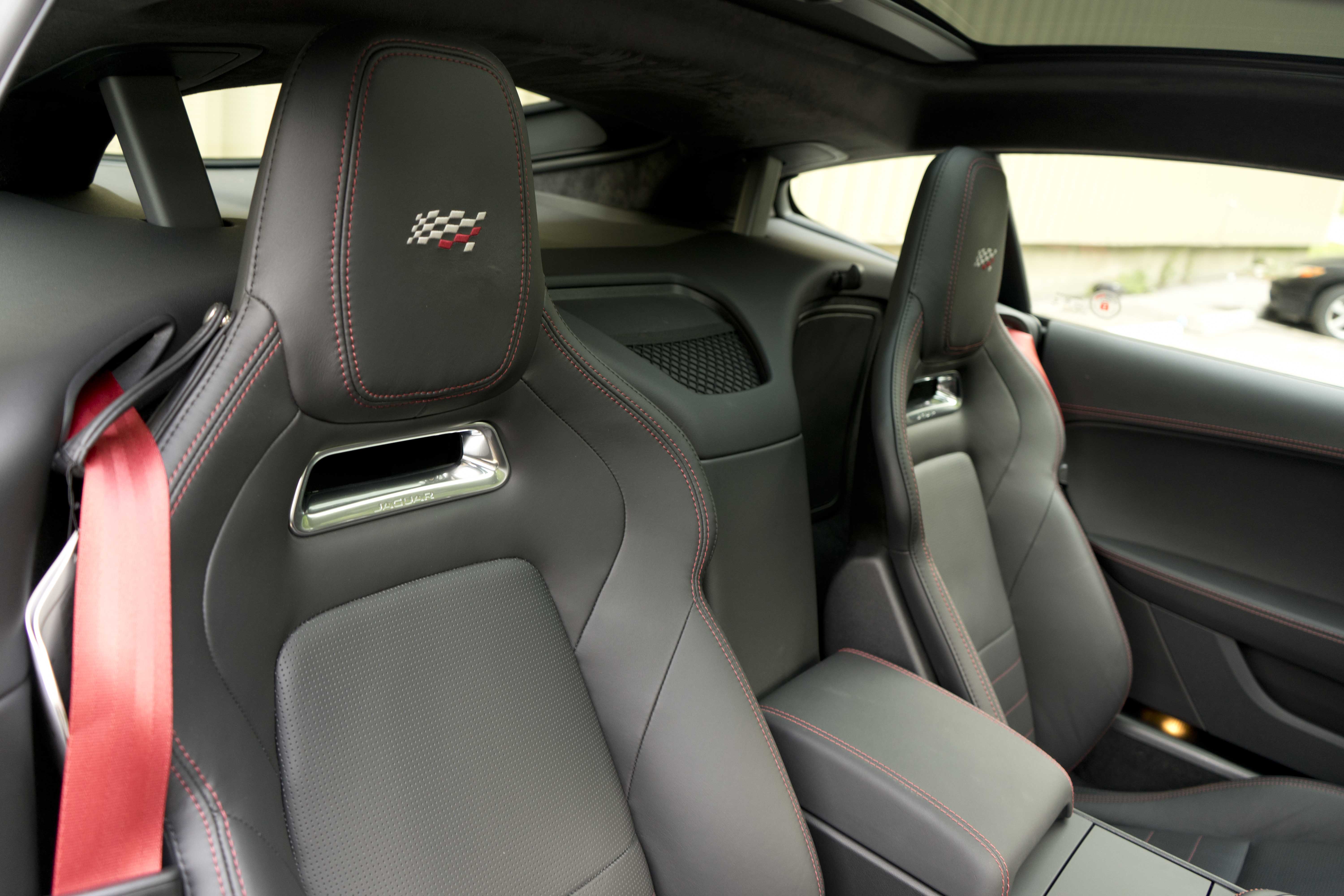 In other markets it’s possible to spec the 296 hp 4-cylinder turbo, or the slightly de-tuned 340 hp V6 with either rear-or all-wheel drive. But here we get the Checkered Flag one way; not surprising given the preferences of the Canadian consumer.

Hidden door handles maintain the purity of the shape and pop out with the press of a button allowing you to slip into the supportive performance seats that are far more comfortable than they look, coddling you in all the right places.

There’s less visual drama inside, except for the motorized centre air vents that emerge out of the console when the car is turned on. There’s not a lot of clutter in here with one main row of toggle switches under three digitized dials for operating the dual-zone climate control. The outer two are for temperature adjustment but pushing them also lets you heat or cool the seats, which is a nice bit of design. 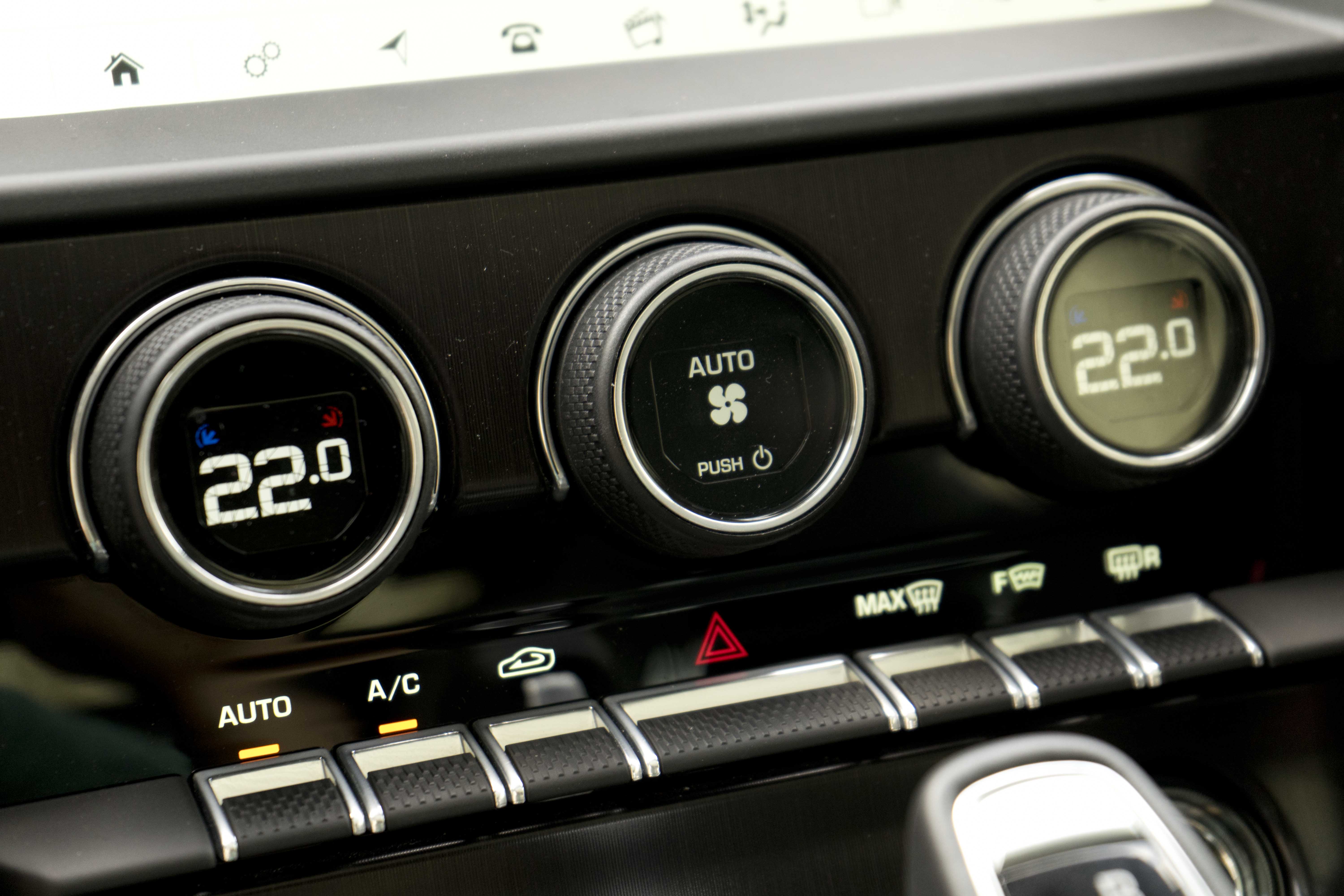 It’s a driver-centric cabin, which is good if you like driving, but even the passenger will find plenty to like in the soft leather that covers almost everything, the sturdy “oh-crap” bar built into the centre console like a flying buttress bisecting the driver and passenger into their own separate leather-lined cocoons, and a really good base-level Meridian sound system.

The simplicity of the cabin, unfortunately, does not carry over into the 10-inch infotainment touch screen that would be familiar to anyone that’s been in a Jaguar or Range Rover in the last couple of years. Processor and graphical updates over time have made it better and faster, but there’s still some lag and it feels light years behind what you get with the latest BMW, Mercedes, and Porsche systems. The Germans really do infotainment well.

Really, this car is about the driving experience, and it feels baked in. The things that matter, like driving position, control feel, sound, excitement, it’s all here.

The supercharged V6 revs freely, pulls hard and sounds like a couple of big cats fighting over the last scrap of zebra. It can do a 0-100 km/h on-ramp blast (provided you have a straight on-ramp) in a tick over 5 seconds, which is quick but not what you’d consider that fast today. But the last thing I felt this car needed was more power.

Having to work with less oomph under the hood meant that the power band was more accessible and you could bask in the glory of that exhaust note more often. An exhaust button on the centre console makes things louder, and our advice is to keep it pushed in. Always. 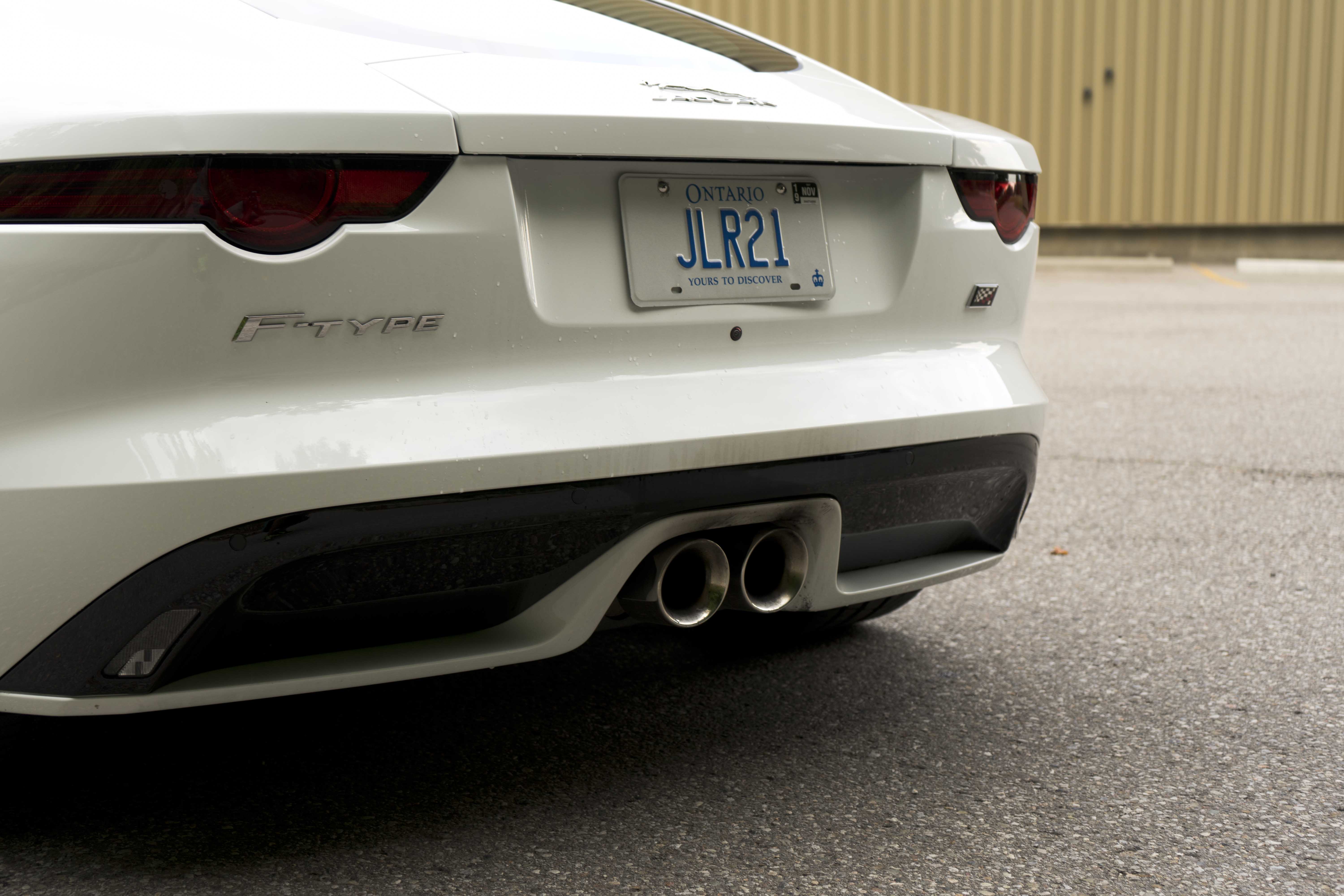 Although I found the steering wheel a bit large for my liking, I did like how it felt in the corners. Typically light even in dynamic mode, what it lacked in feel it made up for in accuracy and speed.

Dynamic mode is another setting that should always be switched on. Everything gets sharper—the chassis, steering, throttle response, shift speed—which in and of itself isn’t that big of a deal but in the F-Type there seems to be little trade-off when it comes to economy. Many performance modes can be too hardcore, with suspensions that ossify and gearing that upshifts only at redline. Burning all the fuel it requires to do that. Nice on a track, maybe, but not so nice on most public roads. The F-Type takes a different approach; adjusting settings based on driver inputs giving you those high-rpm shifts only when you want them and a ride that’s always civilized.

Driving pleasure is at the forefront of the F-Type’s tuning and you can feel that. There’s only a small amount of body roll when pushing hard, the car reacts as a single piece and gives you the confidence behind the wheel that’s expected in this class. It still feels rear-driven despite having four driven wheels and there’s a limited-slip differential with a brake-based torque vectoring system that will make you feel like a better driver than you really are.

The suspension is always compliant, tuned to absorb bumps rather than pound them flat. And then there’s the efficiency. For something that sounds like this, an overall average of 11L per 100 km, spent almost exclusively in dynamic mode is less powerful sports car and more small crossover. This Jag can attack a B-road and bring a smile to your face but it excels even more as a long-distance cruiser. It’s a usable car that’s a genuine pleasure to drive. 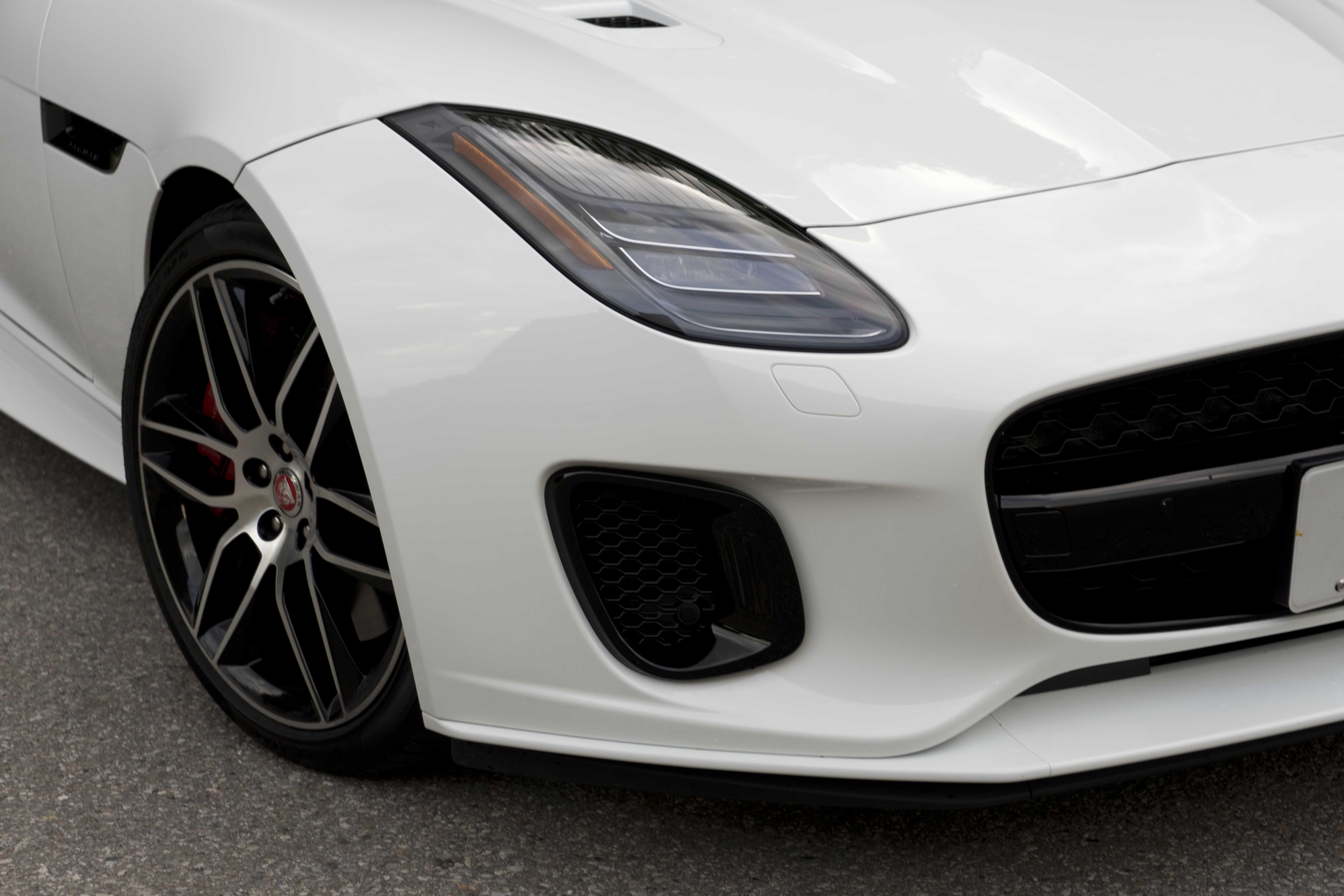 Given that the market for 2-seaters, especially when they cost north of a hundred grand, isn’t exactly on fire these days, an F-Type can be a tough sell. Many customers that shop in this category will probably end up kicking the tires on something that doesn’t originate in Britain.

Remember those superior German infotainment systems? They come attached to cars. And some of them are really very good and usually capture the bulk of this market. Cars like the BMW M4, which will handily outperform this Jag for less money. Or if you pay a bit more, Stuttgart has some rear-engine offerings that’ll outperform them all.

But the Germans are the expected choice. Go to any big city and there’ll be packs of them. You’ll probably miss them all when they drive by but you won’t miss an F-Type. It turns heads like that Lamborghini weakened your knees. When you park your F-Type and walk away you’ll stare at it the longest. And, ultimately, isn’t that the point?