A generation behind, yet with decent value here – at least until upcoming RAV4 Prime arrives

Lexus has done a fine job of creating hybrid versions of nearly all their vehicles, even their six-figure full-size LS sedan and undeniably beautiful LC coupe, both of them in segments that traditionally have placed little priority on fuel efficiency. But compact SUVs are a whole other animal, one of the most popular segments in the country, with luxury compact SUVs in particular seeing a quickening pace of electrification: either hybrid, as in this here Lexus NX 300h, plug-in hybrids with a bit of all-electric range, such as its Volvo XC60 T8 or the low-volume Mercedes-Benz GLC 350e rivals, and very soon all-electric, with the imminent arrival of the Tesla Model Y crossover in Canada.

Those are three increasingly gas-saving technologies that work as progressively green vehicle steps over and above regular internal combustion engines (ICE), lessening one’s environmental footprint (and fuel costs) as you climb the green ladder towards an eventual industry (and societal) goal of zero emissions vehicles.

The Canadian government has declared a goal of every new vehicle sold being zero-emissions by 2040, with other governments an even sooner timeframe. And as of right now, zero-emission vehicles mean either battery-electric or hydrogen fuel cell vehicles, with auto companies turning hard towards the BEV side of that potential VHS-Beta battle at this point. 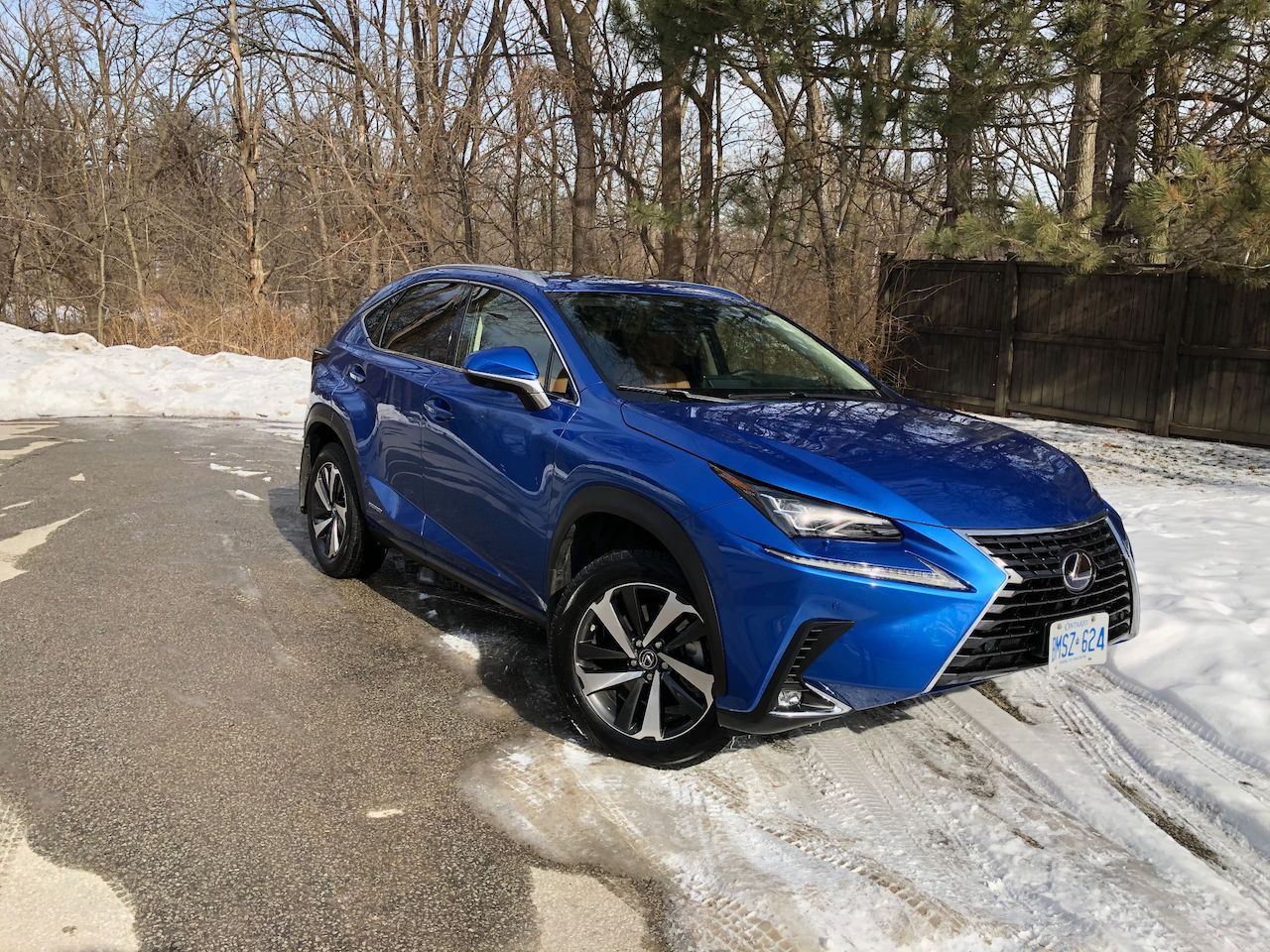 But with that increasing plethora of technology choices also comes the potential for consumer confusion. Lexus is arguably not helping in this regard, recently designating its hybrid vehicles as “self-charging hybrids,” or sometimes even “self-charging hybrid electrics,” terms that seem meant to highlight the fact that they don’t have to be (and in truth can’t be) plugged into grid power.

The NX Hybrid, like most Lexus hybrids, has an extra drive-capable battery that may be charged up enough through regenerative braking to get you through a drive-through on electrons only. But it’s still powering you forward fundamentally on gasoline – regular gasoline, surprisingly, which also helps reduce the hybrid version’s fuel costs.

Unfortunately, it also seems like Lexus is attempting to give its worthy fuel-saving technology a fuzzy marketing push further up this green ladder with labels such as these, as well as moves like offering “hidden tailpipes” on its hybrid vehicles that simply cover the exhaust tip behind rear bodywork. Looking or sounding more electric is not the same as being more electric.

With that said, Lexus deserves some praise for another aspect of its hybrid marketing push that consumers will certainly appreciate: a major price drop. For 2020, Lexus dropped the NX 300h’s price by $4,600 in Canada and its new $46,650 base price is now only $2,300 more than the base but more powerful gas-only NX 300. Sure, part of that price cut was by moving some previously standard equipment to the options list (power tailgate, sunroof), plus the two may not be identically equipped otherwise. 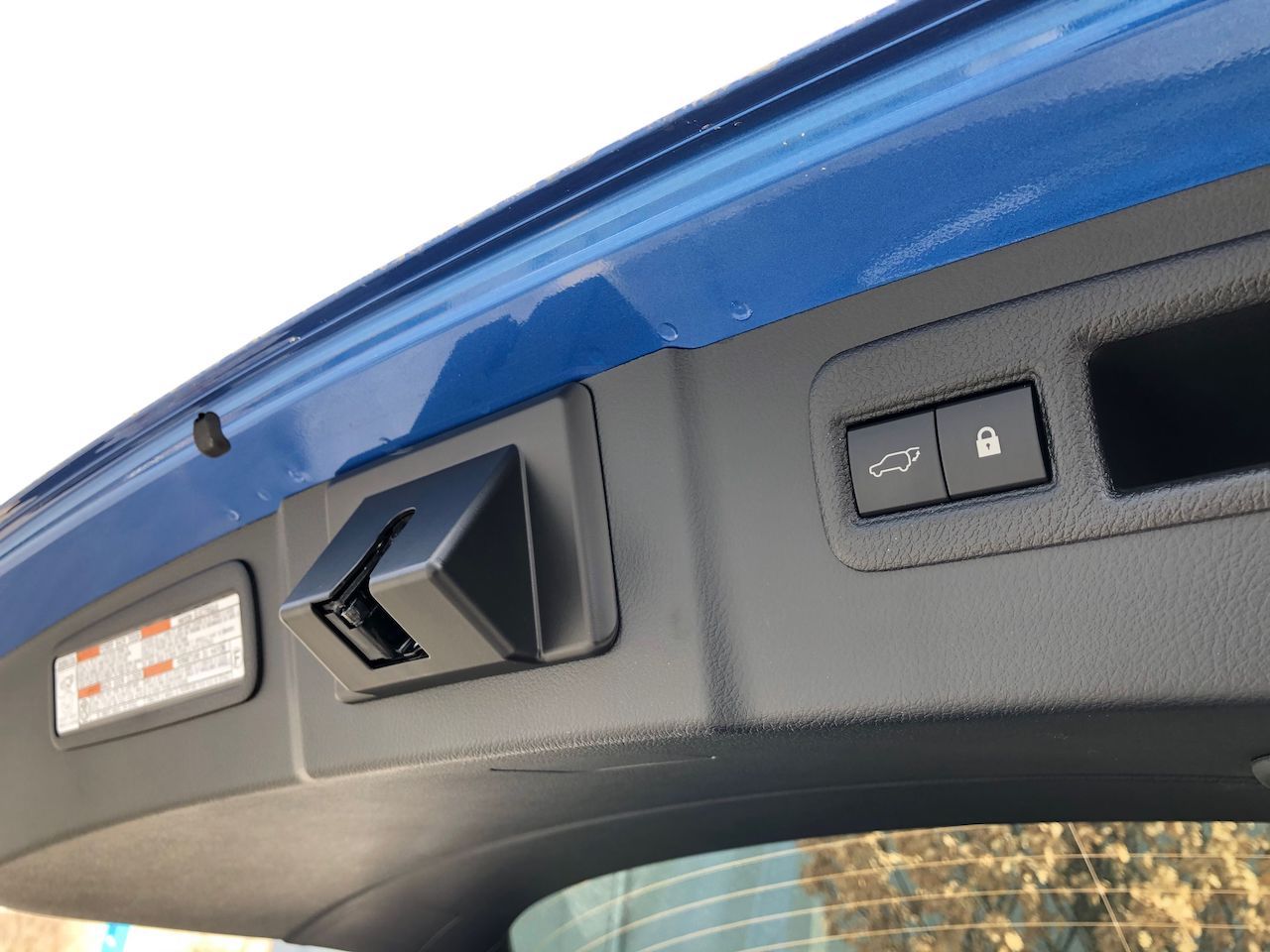 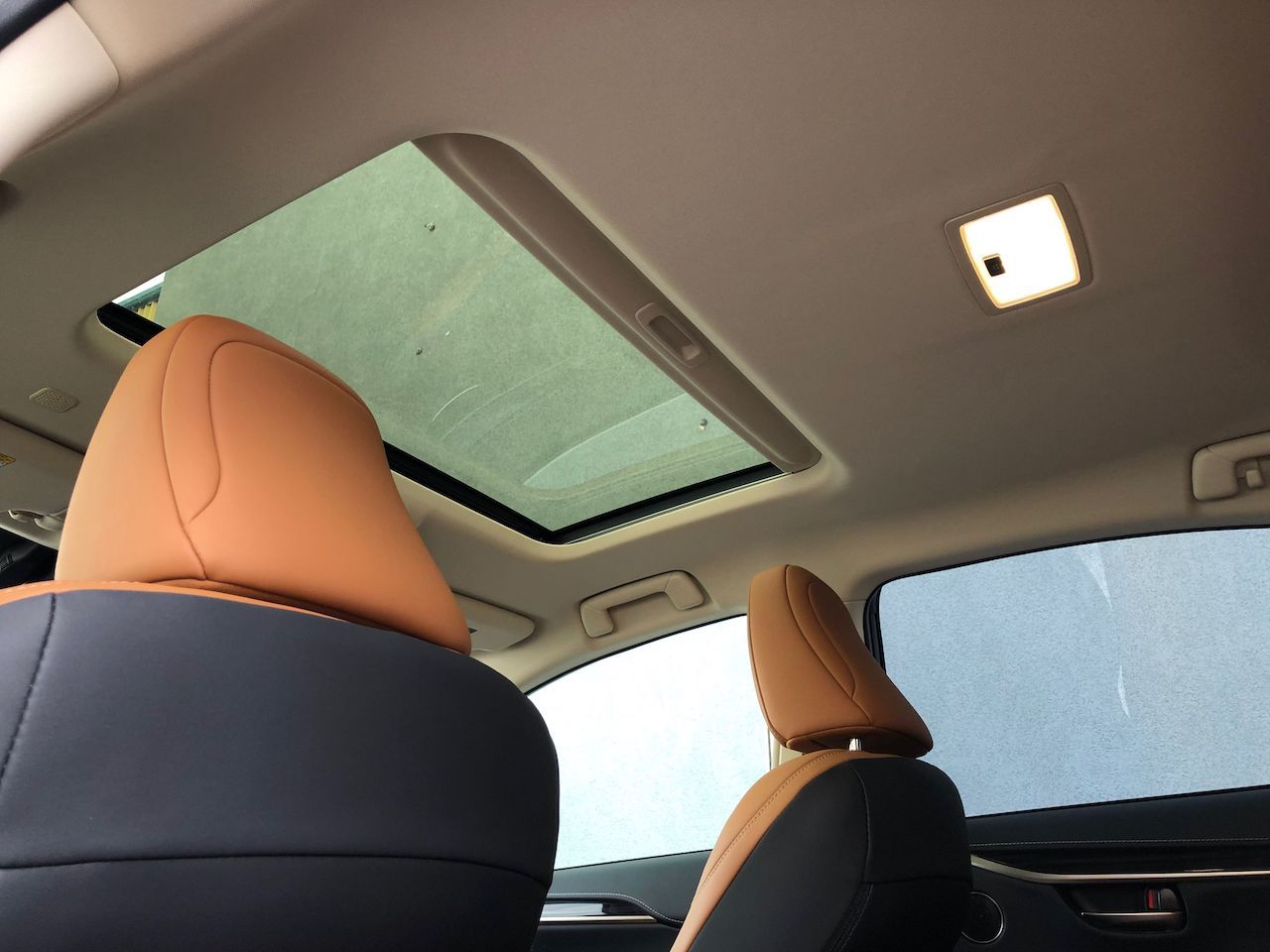 But that lower base price also means that the more fuel efficient NX Hybrid can also recoup its extra cost over a regular NX sooner, even though the dramatic drop in gas prices recently likely moved that time frame further back again. It also moves the base NXh hybrid to a price that’s also only $3,860 more than the top trim of a 2020 Toyota RAV4 Hybrid, making for a good value argument for the Lexus, given its much nicer interior features and finishes, longer warranty, plus – arguably – more attractively upscale looks.

Of note to patriotic ‘buy local’ consumers, Toyota Canada has also confirmed that the Lexus NX will be built in Canada in 2022 for all of North America, as the RAV4 already is.

Upscale looks inside and out, generation behind architecture

To be clear, the mainstream RAV4 Hybrid is particularly interesting here because it and the NXh previously shared a platform and a hybrid drivetrain. However, the RAV4 along with its Hybrid powertrain were re-engineered for 2019, while the NX soldiers on with the originally shared architecture, like the older and more mature sibling that’s taking just a bit longer to come home with that shiny new degree and finishing school manners.

This all results in a RAV4 that’s physically larger and roomier inside than the current NX, plus the RAV4 Hybrid’s engine is more powerful and more fuel efficient overall (the NX’s greater feature count and therefore weight also a factor here). 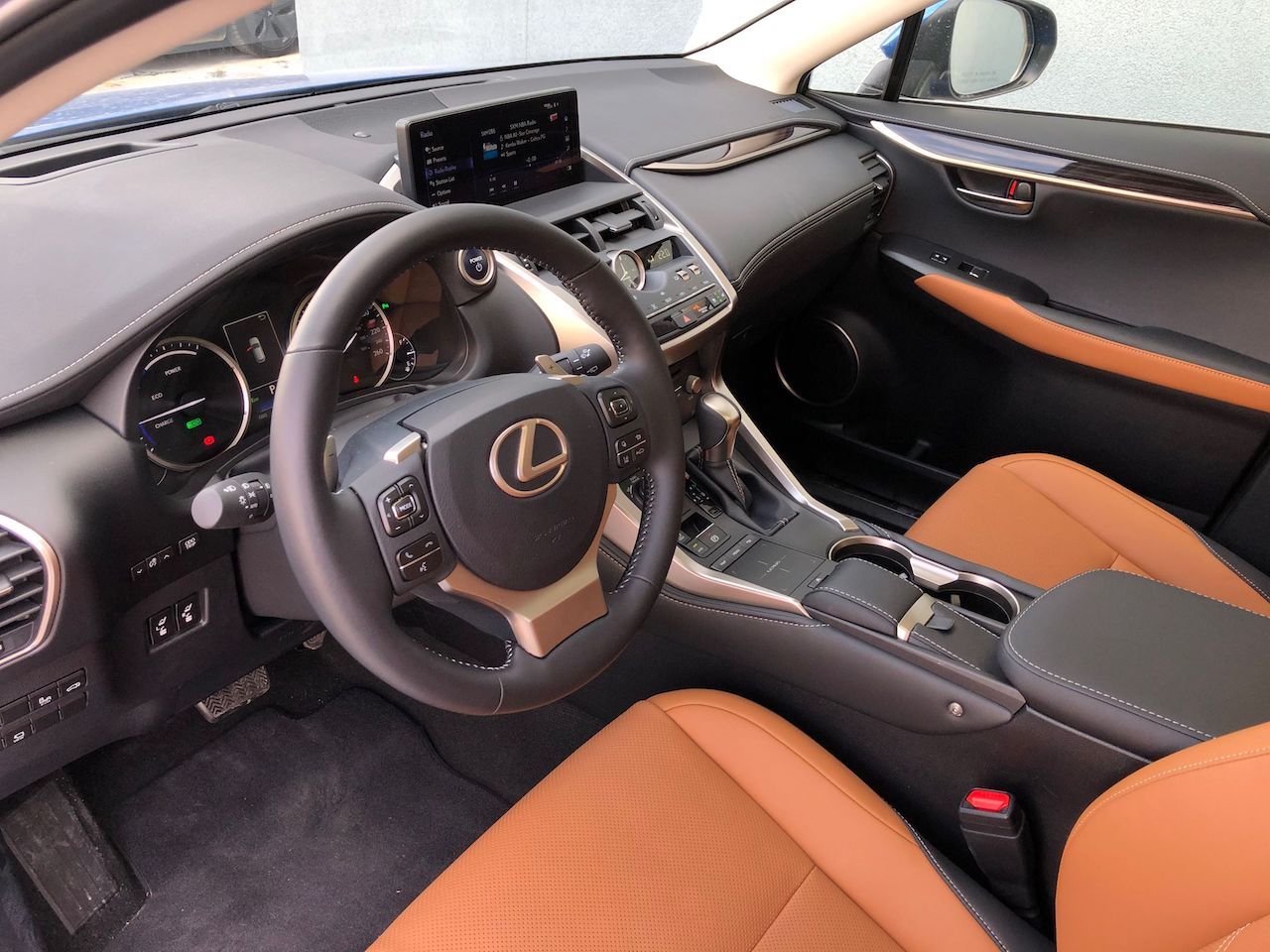 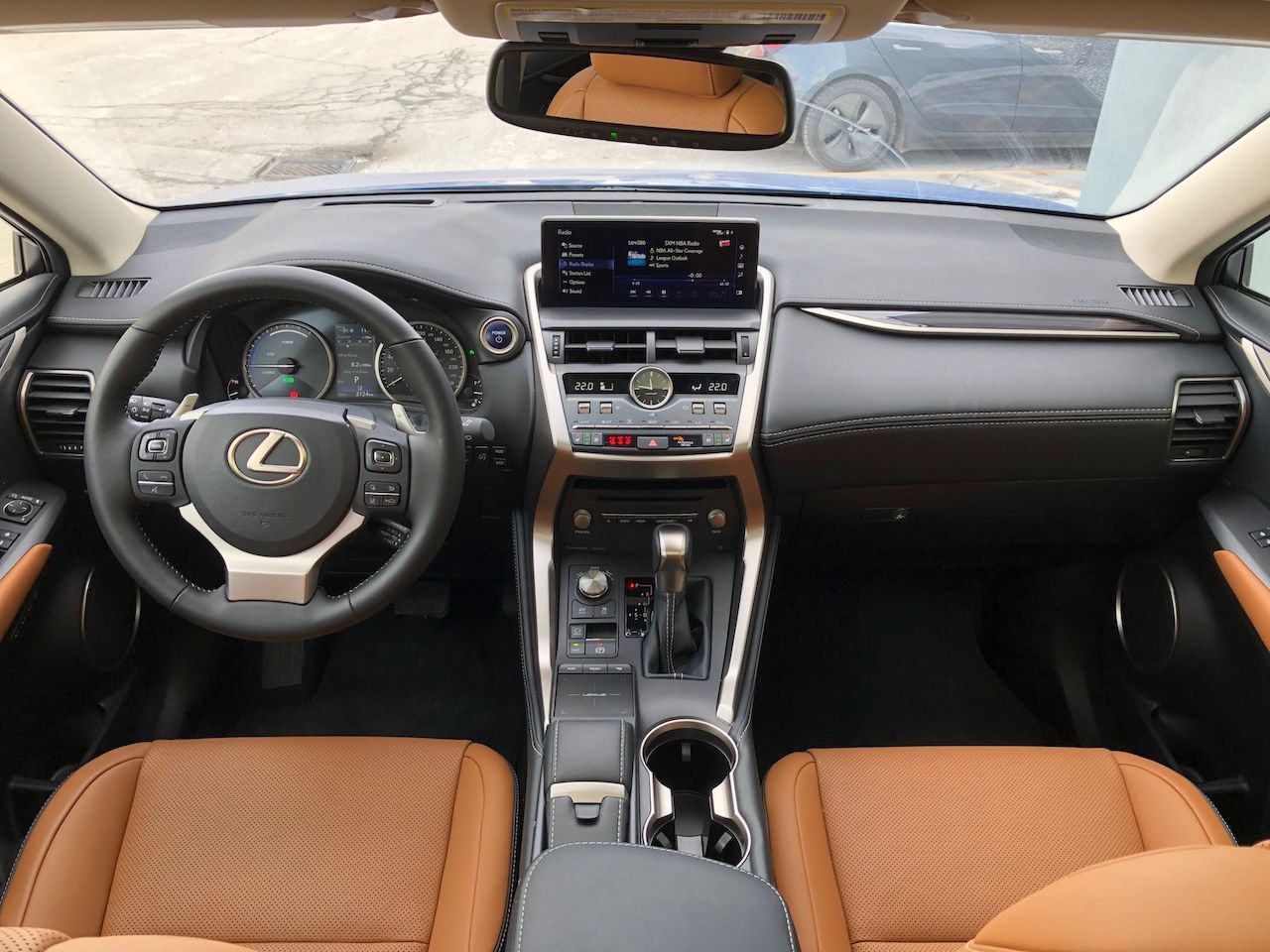 On the looks front, the NX is creeping up my list of best-looking luxury SUVs; maybe it was the sharp Blue Vortex metallic colour, or maybe the large Darth Vader-like front grill is starting to look more attractive in an era of increasingly prominent face masks. The Volvo XC60 or the Alfa Romeo Stelvio are tough to beat in this class, going purely on hot sheetmetal, but the NX’s angular fender flares and pointy beak of a front end add some visual uniqueness in an overall monotonous class.

Inside is also very clean and classy, with subtle dark gray and black wood accents and a matte silver trim with contrasting tan leather seats. There is plenty of front seat room, with more head and legroom than the latest RAV4 or the Mercedes-Benz GLC 350e plug-in hybrid, though rear seat room is further back in the pack.

Practical interior, but some usability issues

As with most modern hybrids, the cargo area is large and folds flat with no “hybrid hump,” making for lots of usable room inside. There’s a useful power operated way to drop the rear seats, but it seems somewhat slow, and strange that there’s no manual way to drop the second row seats, as there’s also a power button located on the bottom of the second row seat to fold them forward.

Also practical are the leather seats, which are easy to wipe off and clean after your four-legged friend jumps all over them in slushy winter conditions, with attractive stitching and contrasting leather accents. The rear three-prong outlet, USB connectors and heated rear seats are also super nice upscale touches.

Less practical but still appreciated was the heated steering wheel switch that is buried on the bottom of the left-hand side panel, which is a welcome reminder to keep your hands below the 10 and two position (nine and three ideally). It turns off with the ignition, unlike the heated seats that remain on, so you have to hit the button over and over again. 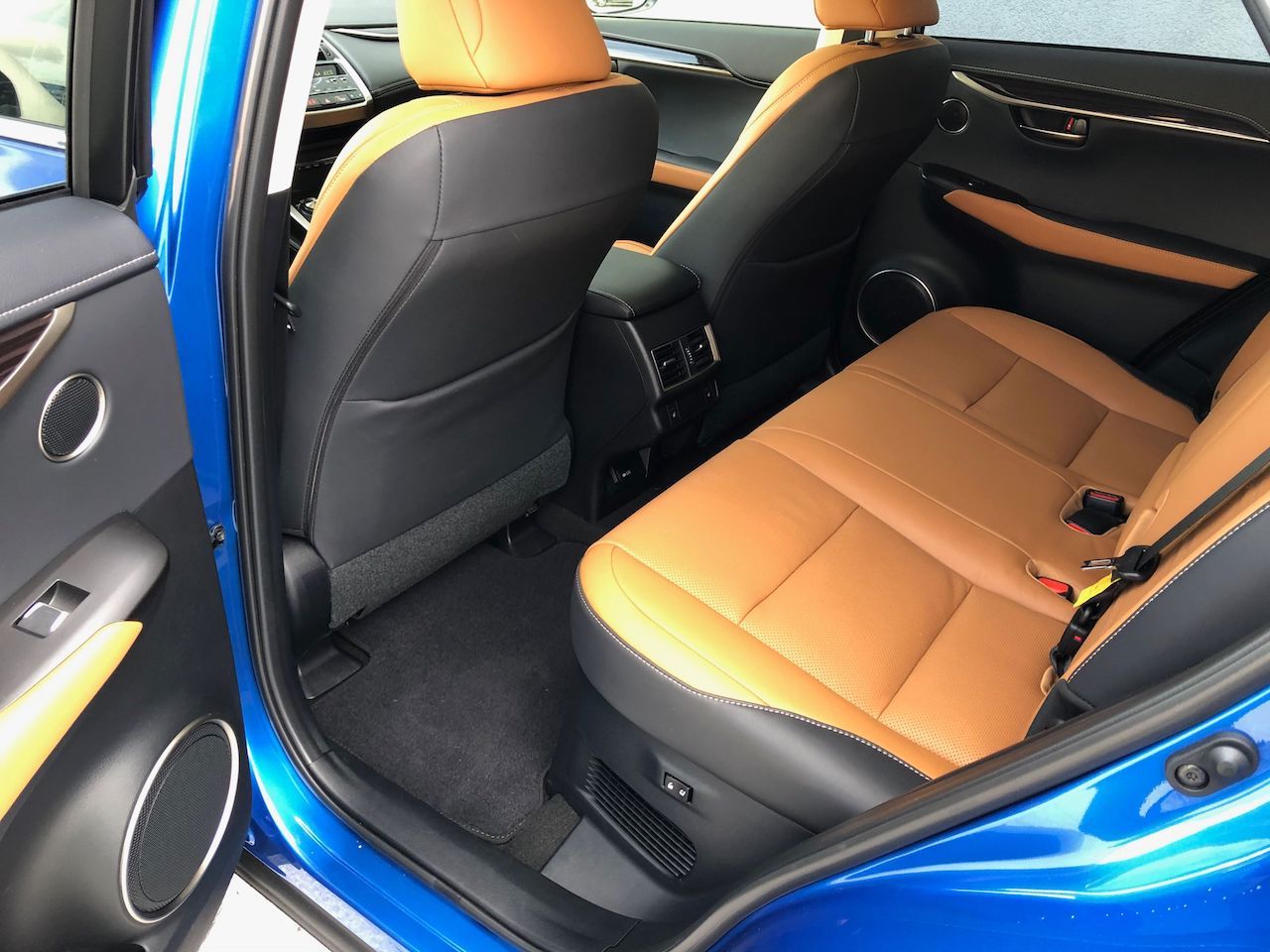 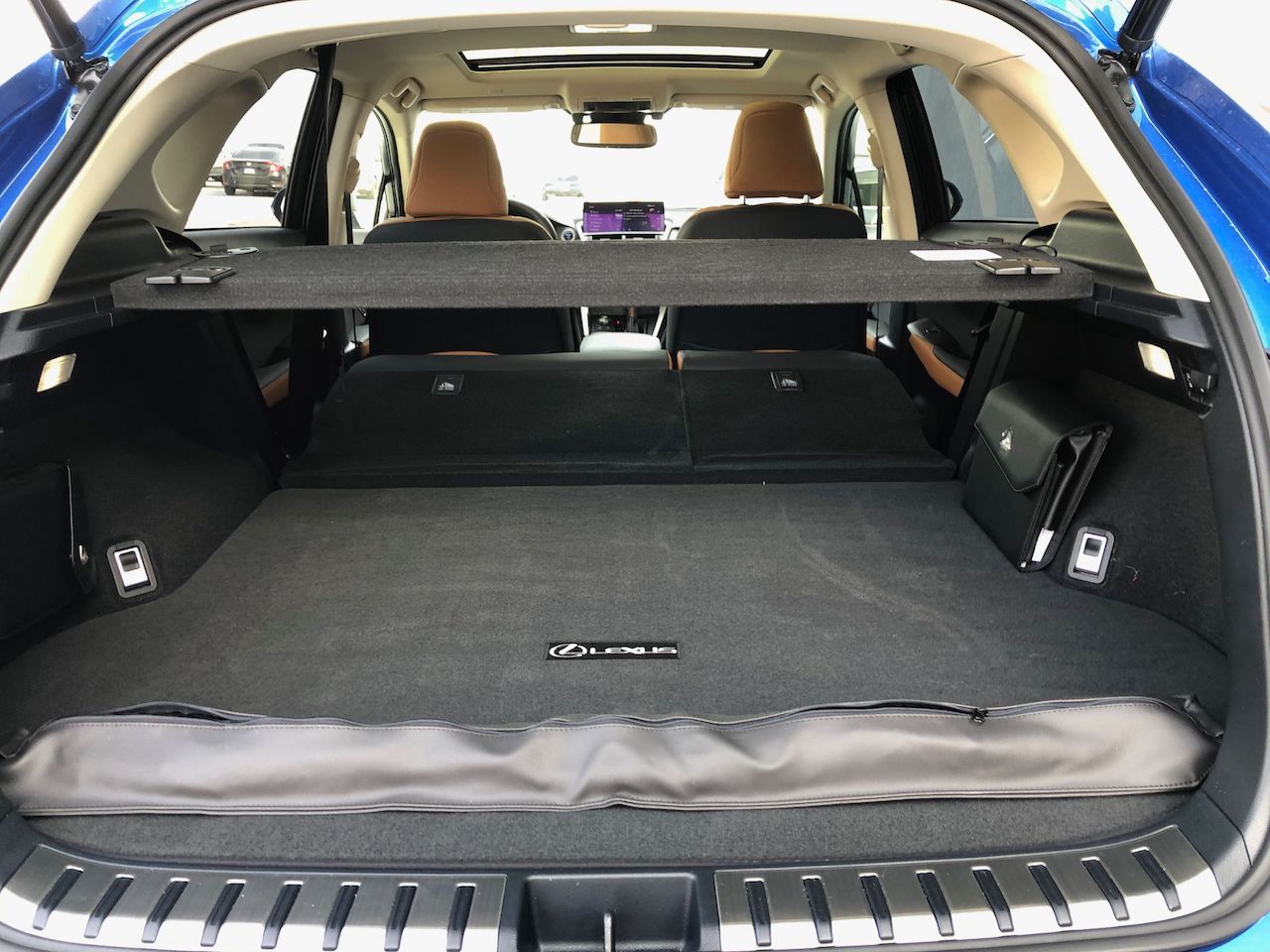 But the main ergonomic nuisance in the NX is the Lexus remote touch system. It’s a touch sensitive pad where your finger can be used as a mouse on the screen, potentially avoiding fingerprints. The problem is that the system uses sensors not to smoothly scroll but to try to bounce from one place to the other in the general direction that your finger is going. In theory that’s a good idea, especially if you’re using it while moving, so your finger doesn’t select things inadvertently as the car bounces along on potholed roads.

In practice, even when you’re stopped at a red light it’s continually selecting things you didn’t want to select, and frustratingly skipping over the things you do. And when you do your best to try and avoid using the touchpad system on a regular basis, say by programming in all 40 of your favourite radio station presets to simply use the steering wheel audio controls, the system doesn’t scroll with your station choices, so you still need to touch it regularly to see which presets you’re selecting.

More for luxury than driving enthusiasts

From the driver’s seat, the NXh feels super-refined at slow speeds when in electric mode, but unfortunately also somewhat sluggish when you punch it. That feeling is exacerbated by the loud engine when it does kick in for extra juice.

Unfortunately the NX is not in electric mode very often on the road, outside of when it’s idling. The hybrid’s 2.5-litre 4-cylinder engine plus its small electric boost courtesy of its 245-volt nickel-metal hydride battery offers a total of 194 hp, or less than the base NX’s smaller 2.0-litre four with 235 hp. It doesn’t call you to drive your hardest regularly, but the e-CVT does have Sport, EV and Eco modes, though its EV mode is fairly useless outside parking lots.

Interestingly, there’s a RAV4 Prime plug-in hybrid slated to arrive later this year, which will offer a whopping 302 hp and a healthy 60 km all-electric range. Given that a new generation Lexus NX has been whispered to arrive in 2021, with further dark web/forum musings suggesting it could also become Lexus’s first PHEV offering, there’s perhaps a reason for optimism for consumers interested in a more performance-oriented NX PHEV. 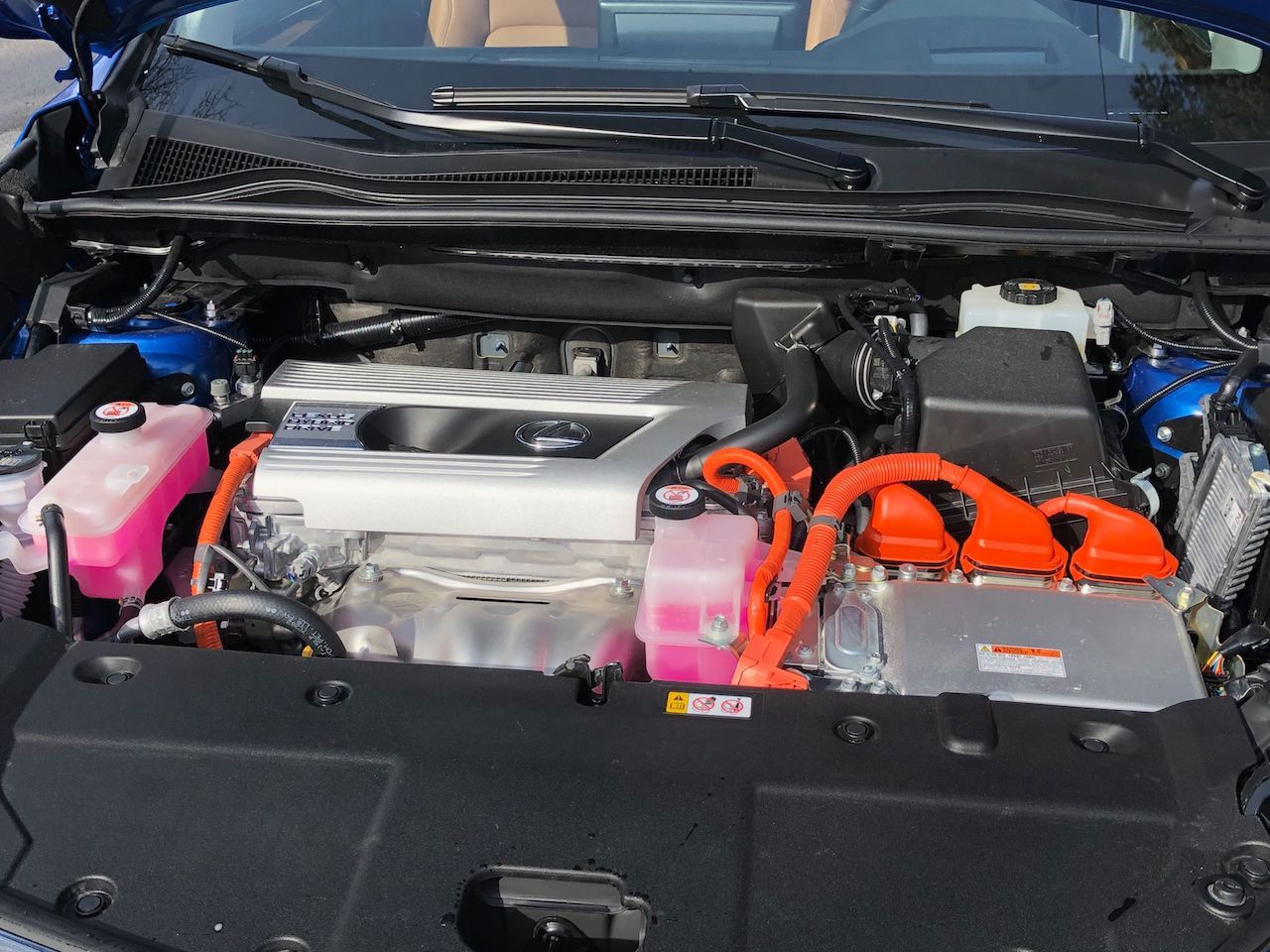 Sure, the NX’s heavier curb weight may cut down the 0-60 mph time from the 5.8 seconds promised for the RAV4 Prime. But offering more power and less overall fuel use along with the finer Lexus styling and interior ambiance could be a possibility worthy of patience, even though Lexus NX and hybrid owners generally haven’t traditionally been given many F-Sport styling or go-fast options.

Ride comfort is more of a Lexus strong suit, and while the suspension is good at soaking up bumps overall, it’s a level or two below the RX, which is super-smooth ride quality wise, and also engine response wise.

Also impressive was its fuel efficiency, with an average in the low 8.0s all week, with an 8.1 on its last trip, mostly in slushy highway winter conditions. And it’s still shocking this NX Hybrid takes regular, unlike basically every other luxury compact crossover, including the regular NX 300.

At just over $61,000 as-tested, this fully loaded NX 300h provided an impressive mix of upscale design, comfort, practicality and environmental responsibility. Those looking to max out the value equation, made much better for the 2020 model year by its price cut, may wish to forego some optional niceties that came on our tester, or even look at the similarly well-equipped and touchpad-free RAV4 Hybrid. 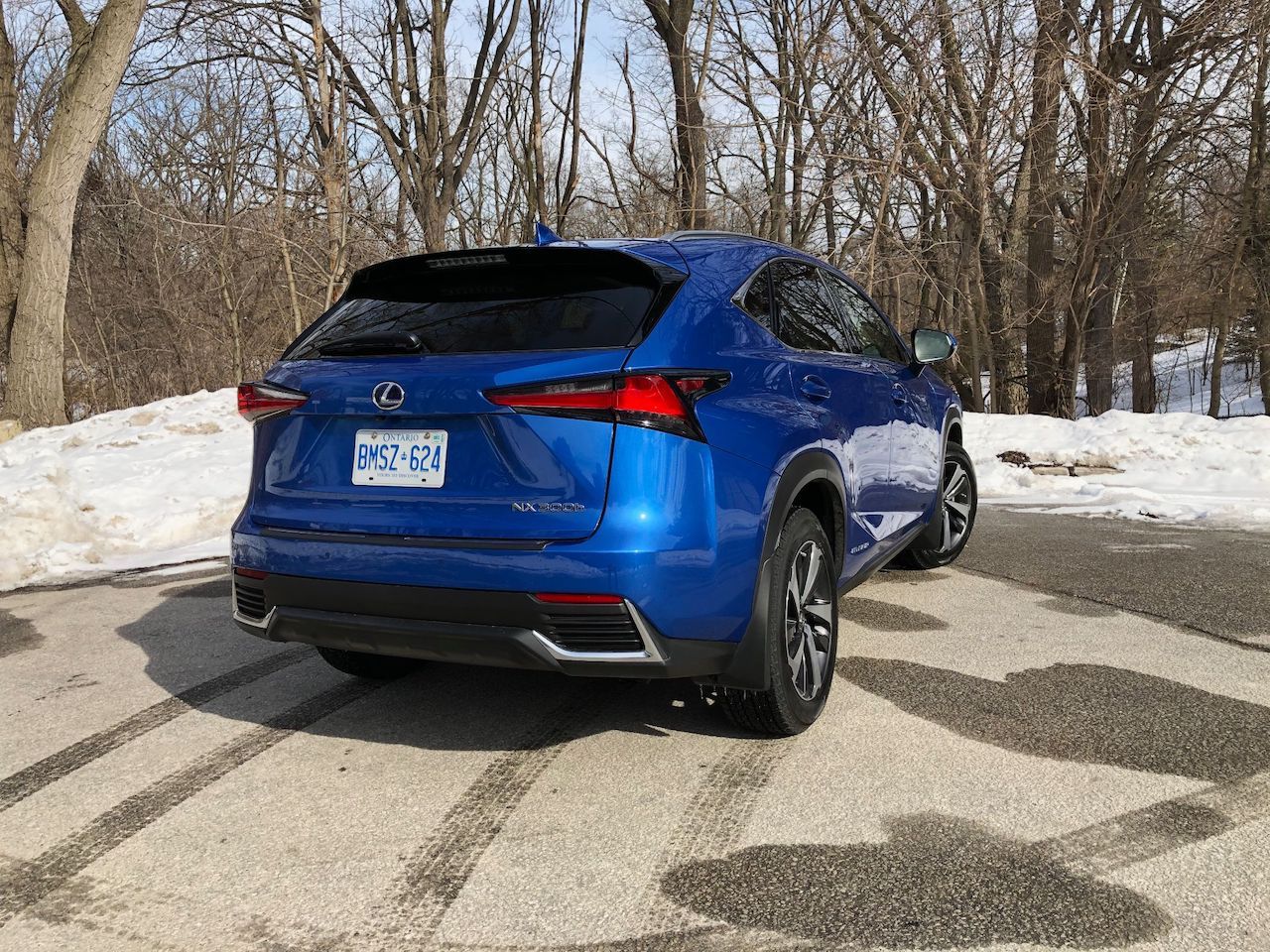 But in that case, you wouldn’t enjoy the classier looks inside and out, which are a steal for its minimal upcharge over the Toyota RAV4 Hybrid. The big question is, will it still be a steal over the faster and more frugal RAV4 Prime set to arrive this summer? That may be the NX Hybrid’s true value difference maker, at least until the next-gen one arrives.