If you ever wanted to know why just about every premium brand is loading up on mid-sized crossovers and SUVs, the history of the Canadian-built Lexus RX is instructive.

Launched in 1998 when premium brand lineups were still dominated by passenger cars, the RX was a pioneer that enjoyed immediate success, an outcome that influenced rivals to add utilities to their lineups in the following years. It should be noted Mercedes-Benz debuted the ML (GLE since 2015) in the same year, but it was years before others followed suit.

Two-plus decades later, the Lexus SUV roster now stands at five (six if you count the RX L six / seven-passenger) and the RX is the brand’s bestseller. In 2019, Lexus sold 8,827 RXs in Canada, taking the top spot by a wide margin.

It has been so dominant in fact, that the RX has topped the Lexus Canada sales charts since at least 2012 (the oldest figures publicly available), and likely further back than that. It’s a similar story in the U.S., where the RX moved 111,036 units in 2019, almost double that of the runner-up NX (58,715).

Given its dominant status within the family, the significant updating it receives for 2020 (plus I haven’t driven one in years), I figured it was time to revisit the RX.

Last of the K platform

The RX is now in its fourth generation and has been built for the North American market in Toyota Canada’s Cambridge, Ontario assembly facility since 2003. It is also built at Toyota’s Miyawaka plant in Japan.

The current RX lineup boils down to regular and long, gas and gas hybrid. This means there are four models: RX 350, RX 450h (hybrid), RX 350 L and RX 450h L (hybrid). The 350 L is available in either six or seven-passenger configurations, while the 450h L is available as a six-seater. 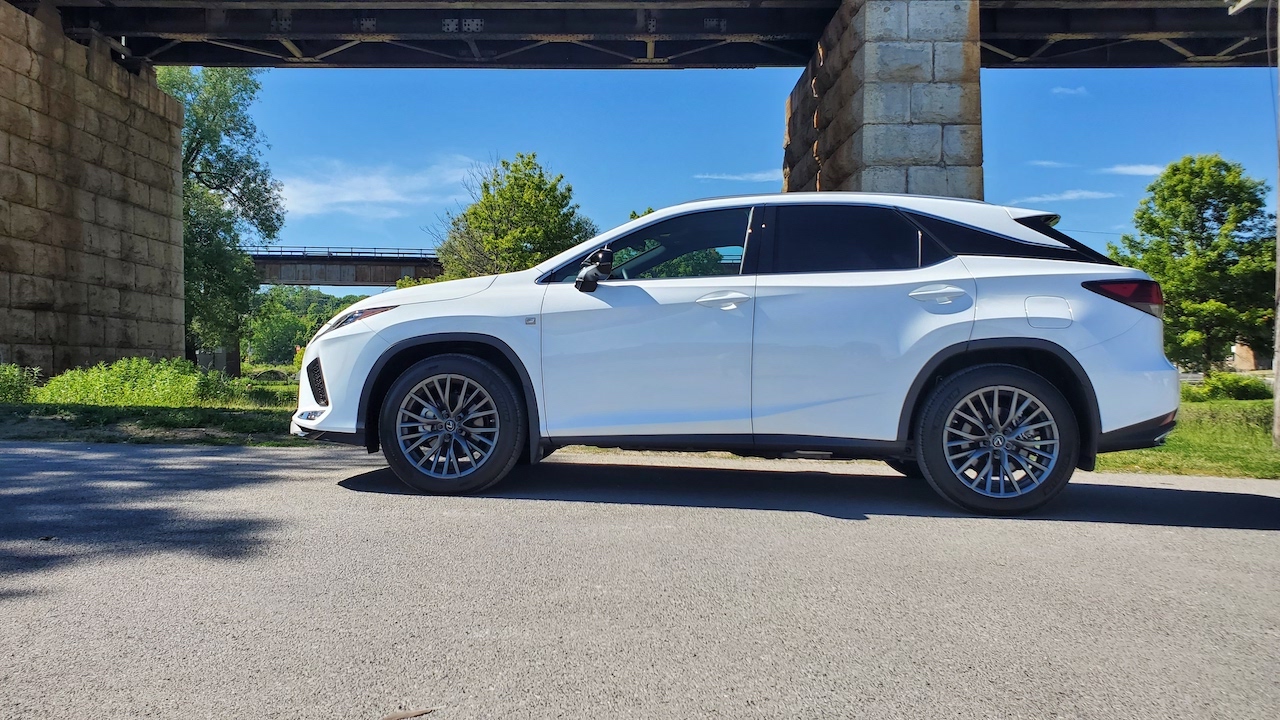 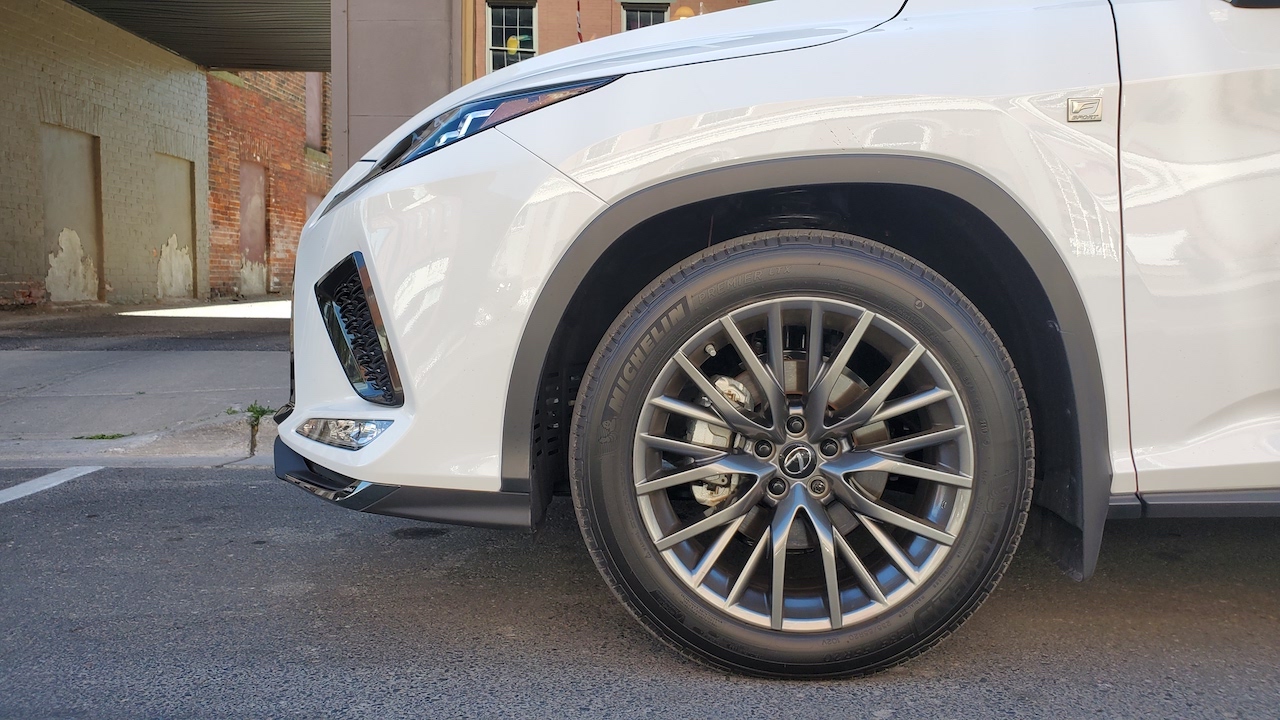 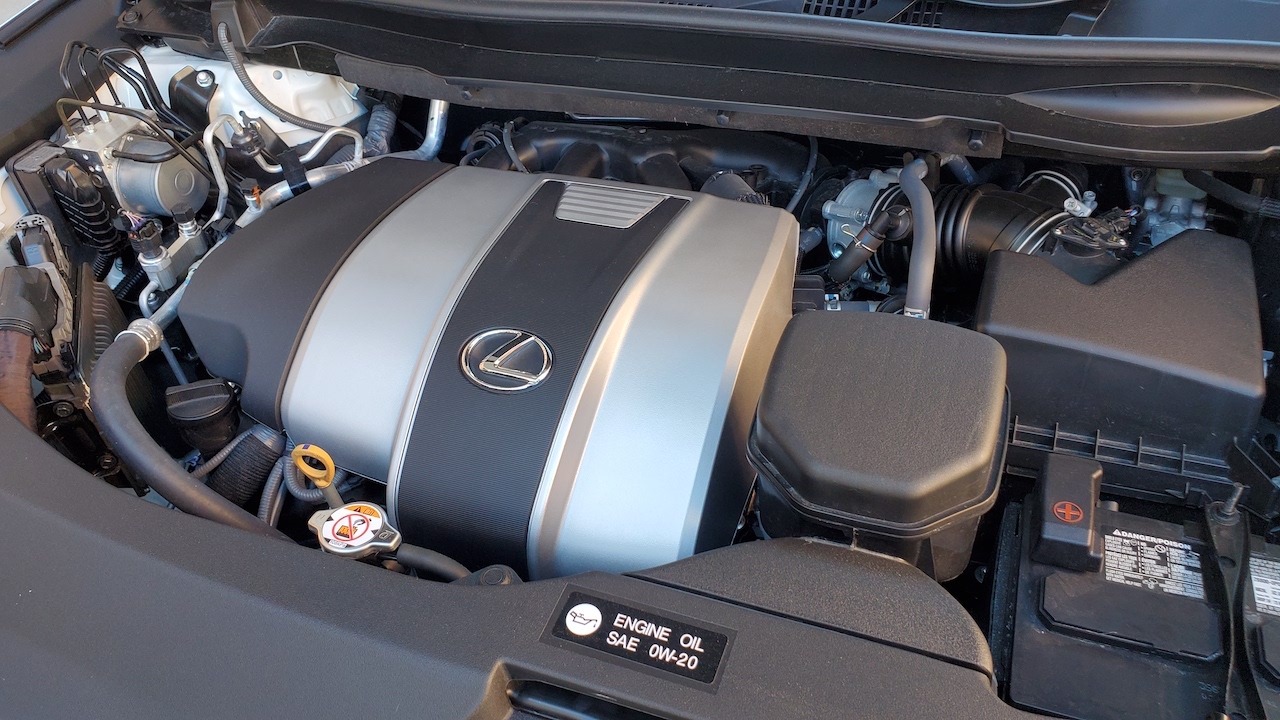 Built on Toyota’s K platform, which used to underpin the Camry sedan, Sienna minivan and Highlander mid-size utility before all were moved to a newer TNGA (Toyota New Global Architecture) structure, the RX is powered by a 3.5-litre V6 that produces 295 horsepower and 267 lb-ft. in gas-powered units and 308 total horsepower in gas hybrid models.

The power bump for the latter is due to the Lexus Hybrid Drive system which pairs the V6 with two electric motors, one of which is used to drive the rear wheels as part of the all-wheel drive system. On the transmission front, gas models feature an 8-speed automatic, while the gas hybrids use an electronic CVT. All-wheel drive is standard across the model range.

The fourth gen RX dates to the 2016 model year, so a mid-cycle refresh is on tap for 2020. Among the changes are new front and rear fascia with new triple-beam LED headlights, updated LED taillights, along with new 18-and 20-inch wheel designs depending on grade. A power liftgate, activated with a kick, is also available with the Executive package.

On the inside, the RX has an available 12.3-inch infotainment touchscreen (8-inch unit is standard) that supports both Android Auto and Apple CarPlay connectivity. The screens are paired with a remote touchpad that replaces the clunky mouse-style device found in older Lexus models. The RX now comes with six USB ports located throughout the cabin. 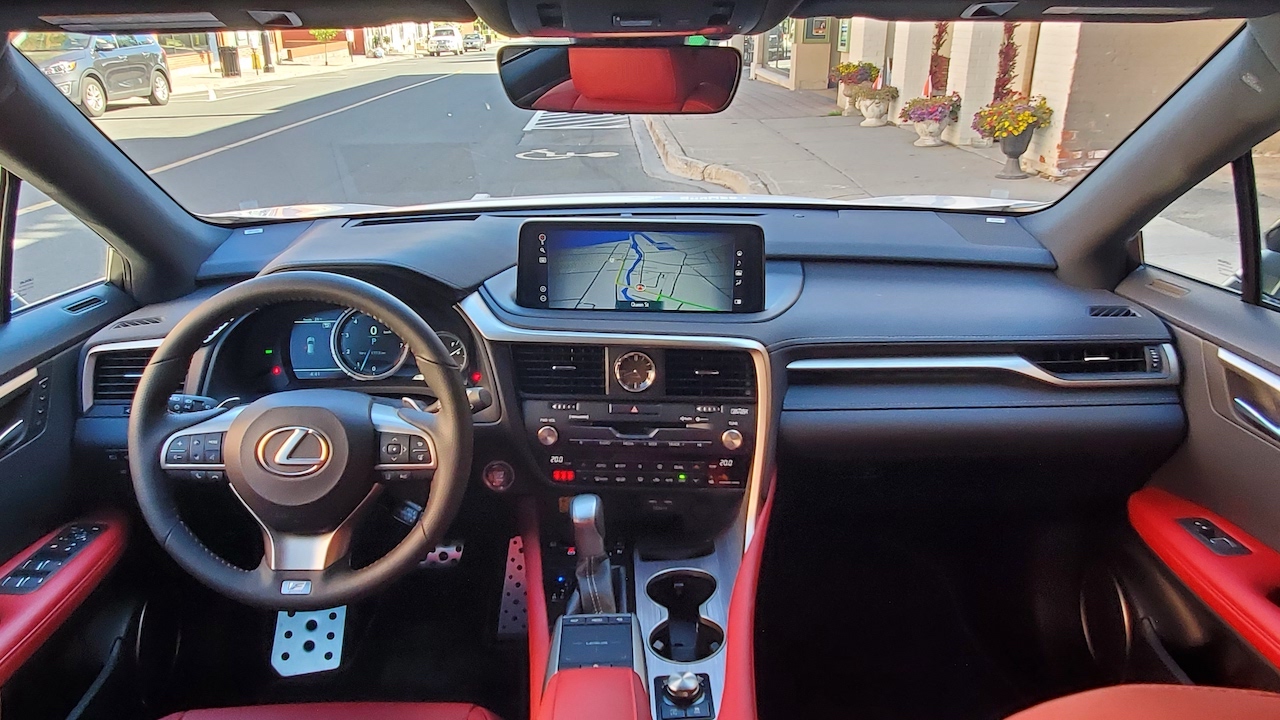 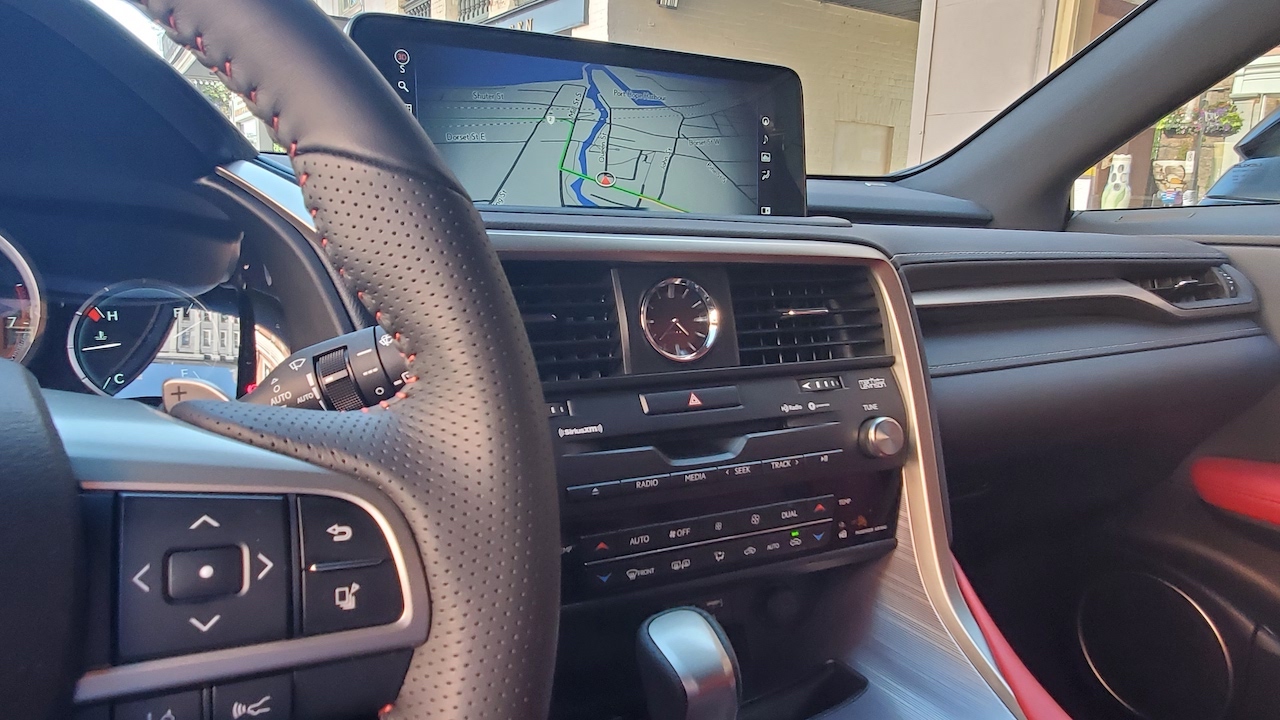 Overall, the 2020 RX has a stiffer suspension for better NVH (noise/vibration/harshness) control and better handling, via active corner braking, which is designed to bleed out understeer by applying braking force to the inner tire during cornering.

In terms of safety, the ’20 RX comes standard with Lexus Safety System+ 2.0, a suite of active safety technologies that includes two new features: daytime bicyclist detection and low-light pedestrian detection and Lane Tracing Assist, which is designed to detect lane markers to help keep the vehicle centred in its lane.

For this review, Lexus Canada set me up with an ultra white tester finished with a circuit red and black interior. In addition to its long list of standard kit, my tester is also outfitted with the F Sport Series 3 package ($13,800) which includes more stuff than I have room to list. Among the highlights: triple-beam LED headlights, premium LED combination taillights, 20-inch F Sport alloy wheels, 12.3-inch touch infotainment display, 15-speaker Mark Levinson premium surround audio, head-up display and panoramic moonroof. The before taxes price checks in at $71,925, including freight.

As the pictures make clear, the RX 350 offers a handsome, contemporary take on luxury that exudes a stylish and high-tech aesthetic. The F Sport wheels, badging and blacked-out bits do give the RX a more dynamic look, but its appeal isn’t diminished much without it.

Where the RX really shines is in the cabin. The two-tone black and circuit red colour scheme has an aggressive look, and the trim materials used have a quality look and feel, especially the F Sport seats, steering wheel and shifter. The exposed stitching in other touch points in the centre console also provide a nice premium touch. In a luxury vehicle, the controls and switches should operate with smooth precision and I am pleased to report that’s the case here. 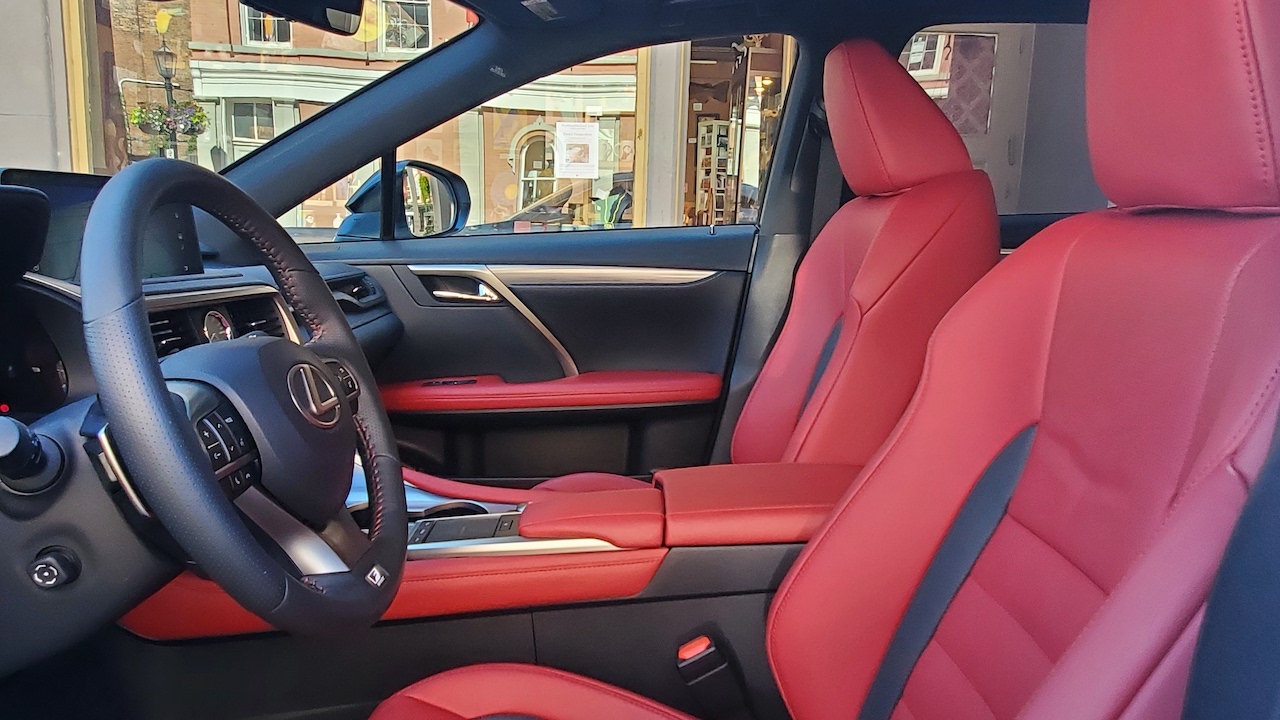 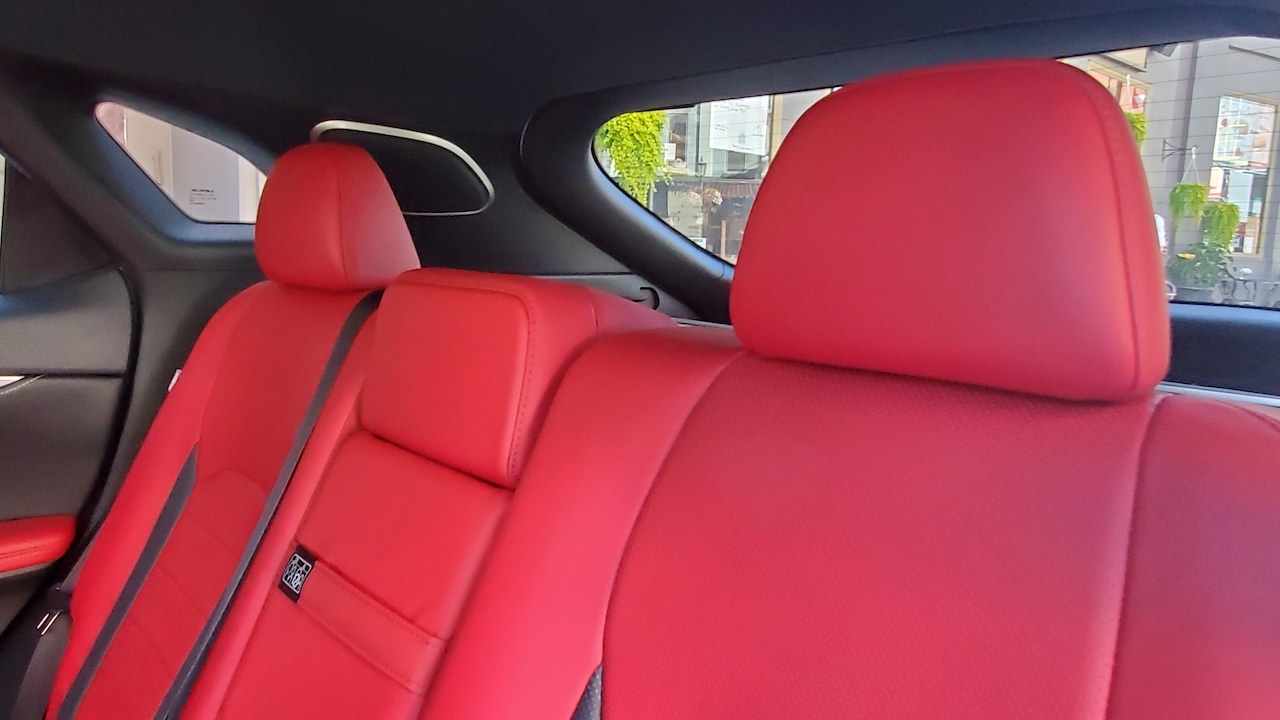 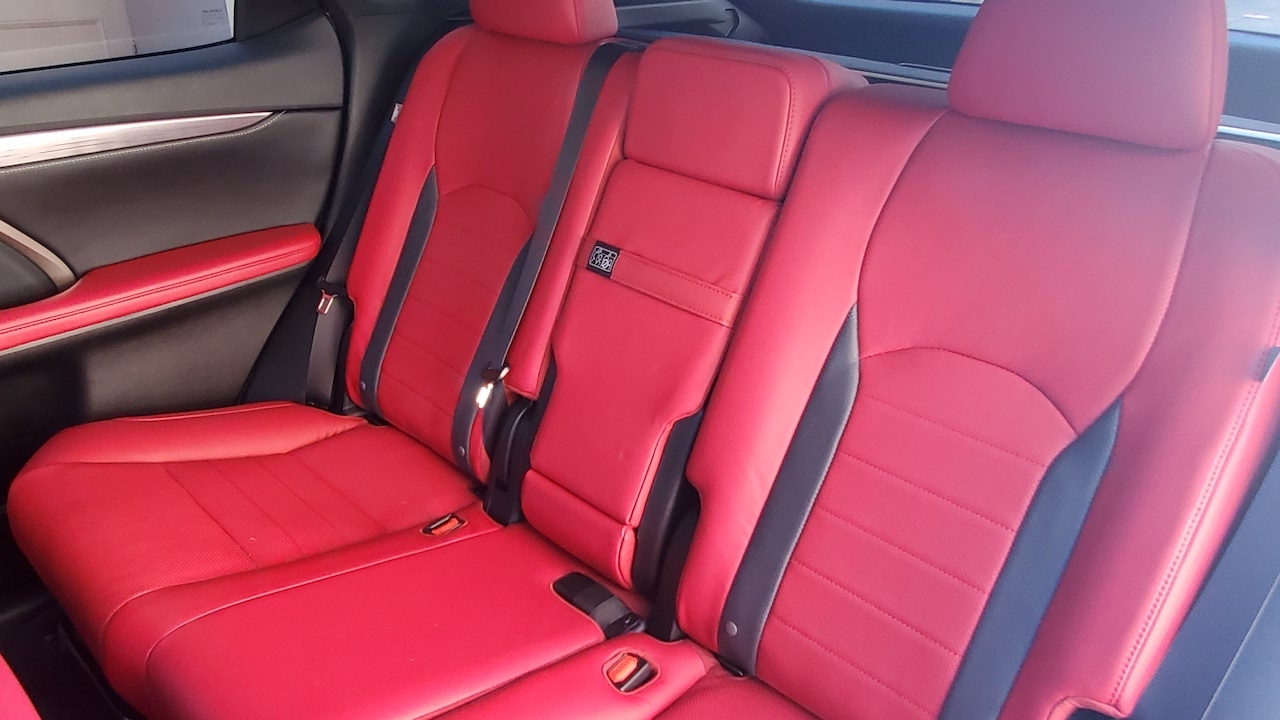 Another standout is the 12.3-inch infotainment screen which, in conjunction with the 4.2-inch instrument cluster display and digital speedo and tach, add to the RX’s high-tech character. The 12.3-incher is beautiful, with pin sharp HD resolution, smooth transitions and animations and quick response times. I’m less impressed with the track pad interface which can be distracting and fussy to use, although I acknowledge it is an improvement over the mouse controller used in older Lexus vehicles.

On the utility front, the RX provides ample space for five and a good amount of cargo space with the rear seatbacks up (694 litres) and is even more expansive when they are down (1,580 litres).

The 3.5-litre V6 has been a workhorse engine in the Toyota and Lexus lineup for years, and it performs like a powerplant that has benefitted from years of refinement. Power delivery is smooth and progressive, and while peak torque is relatively high in the powerband (4,700 rpm), there’s enough low and mid-range grunt to hustle the RX 350 off the line quickly, and for passing manoeuvres that require a quick stab of the throttle.

My tester has loads of F Sport kit bolted on to it, including front and rear performance dampers, adaptive variable suspension and 20-inch alloy wheels. These upgrades combine to make the RX 350 a more responsive vehicle. Cornering is flatter, body roll has been reduced and understeer is less noticeable. While I wouldn’t say these enhancements turn the RX into a performance vehicle, its character does feel more dynamic with F Sport tuning, especially when the drive mode selector is dialled to sport or sport+. 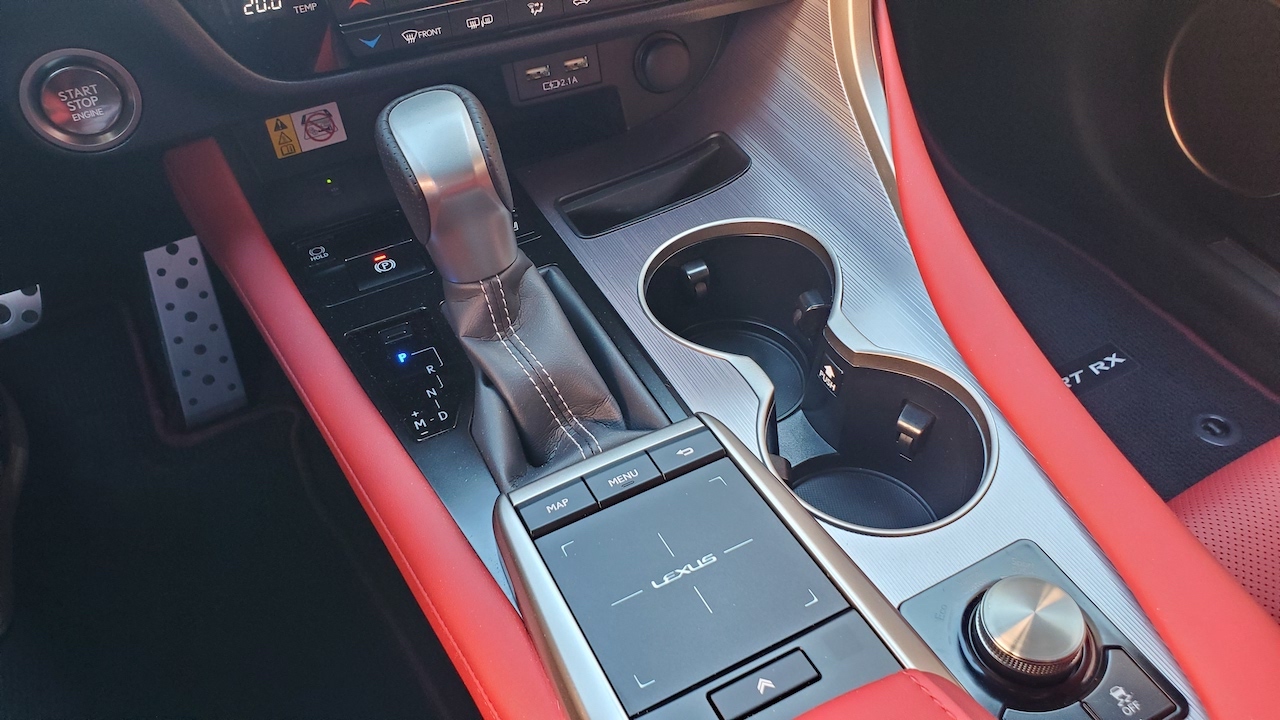 On the ride front, the RX does a good job of isolating all but the worst road imperfections and preventing their impacts from intruding into the cabin. Noise, vibration and harshness (NVH) is kept to a bare minimum throughout the entire operating range, making the RX a pleasing vehicle to drive in everyday driving conditions.

After spending a week with the RX 350, its appeal becomes abundantly clear. It checks the boxes that matter to consumers.

Performance isn’t outstanding, but good for an SUV, especially when equipped with the F Sport package. The exterior styling is perhaps a bit too aggressive, but still handsome and high-tech in keeping with the overarching brand styling direction.

The cabin is spacious and comfortable, has a strong premium feel and is loaded with content one would expect for a vehicle in this category and the 2020 updates enhance its appeal. 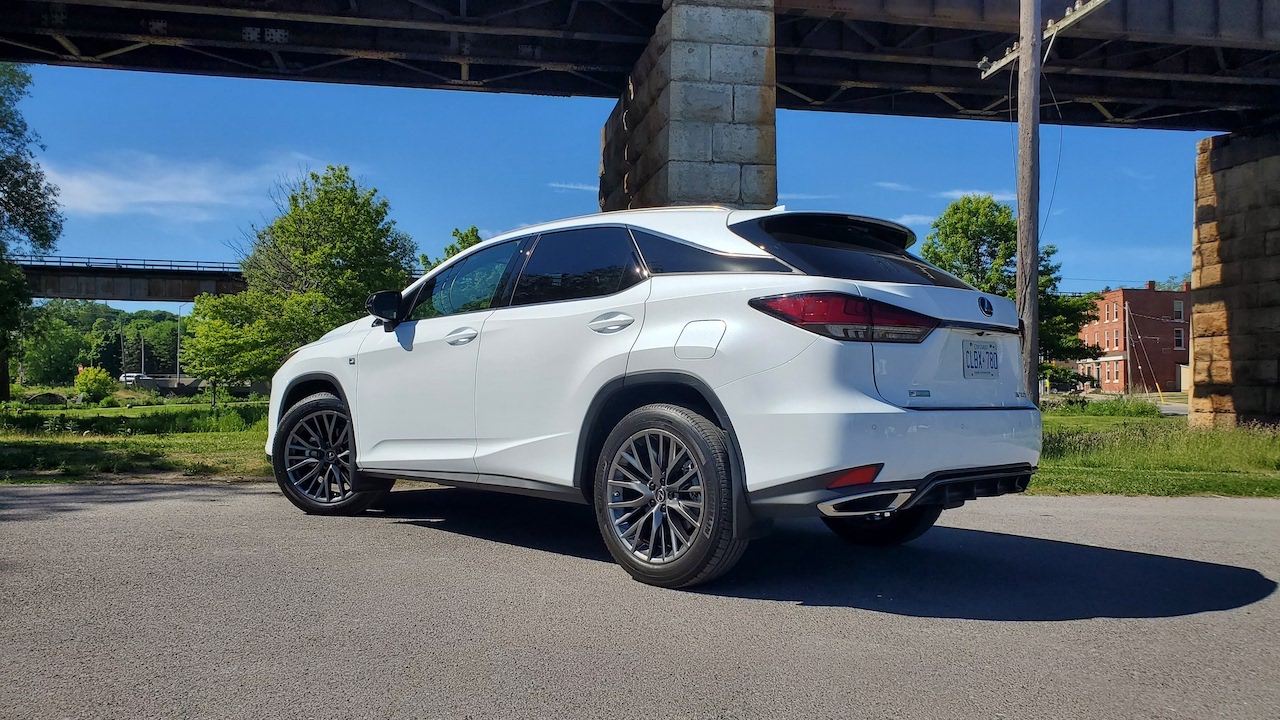 So yes, it makes sense that the RX has been a sales champion in North America for years, a reality that isn’t likely to change anytime soon.

Negatives? A few, but they are subjective.

The F Sport Series 3 package has a big price tag, but it comes with a lot of stuff that goes far beyond badges and bigger wheels. The infotainment track pad interface can be fussy and distracting, but it’s not a deal breaker. And yes, my tester returned below average fuel consumption, but mileage varies

Bottom line, the RX 350 embodies what many shoppers are looking for in a premium vehicle experience, which should keep its popularity from fading.