Mercedes head-turner has just about everything

Over the course of a year, I have a lot of different cars and trucks parked in my driveway. My neighbours have come to expect this and are usually not surprised when my personal truck disappears and some exotic vehicle of one kind or another is parked in its place. But rarely do they stop and talk about the new one. I live in a neighbourhood where a car is a car – something to get you from A to B.

But two weeks ago, I had a white-with-black-trim 2020 Mercedes-Benz G 63 SUV out on loan and that one sure got people talking. Folks out walking their dog stopped to chat. My next-door neighbour asked for a ride. A young guy canvassing for the Trillium Health Partners – Mississauga Hospital made his pitch and then, as he went down the walk, turned and called, “Nice car!” Another dog walker, who was also pushing a baby carriage, wanted to know if I’d traded in my truck for it and I had to say no, unfortunately.

I say “unfortunately,” because I have a soft spot for Mercedes-Benz automobiles. Three years ago, to celebrate Canada’s Sesquicentennial, the company took me and a half dozen other automotive journalists on the Canadian road trip of a lifetime. Driving all of the cabriolets Mercedes-Benz had on sale in Canada at the time, we went from the east coast of Newfoundland to the west coast of Vancouver Island in a week. Okay, there were a couple of legs where we needed the help of Air Canada (we flew from Toronto to Winnipeg, for instance) but when everything was said and done, we’d visited the 10 provincial capitals and the nation’s capital and I can remember it all as if it was yesterday.

The other reason, of course, is that Lewis Hamilton has dominated Formula One racing for years and he drives for Mercedes. As we all know, F1 is the world’s most expensive sport and that might help explain why Mercedes-Benz cars tend to be a little more high-priced – some might say a lot more – than your average family sedan or SUV.  This G 63, for instance, goes for $195,900 – out of reach of most people. But cars more than half that price don’t attract the attention this one did, which tells you something about people and cars. 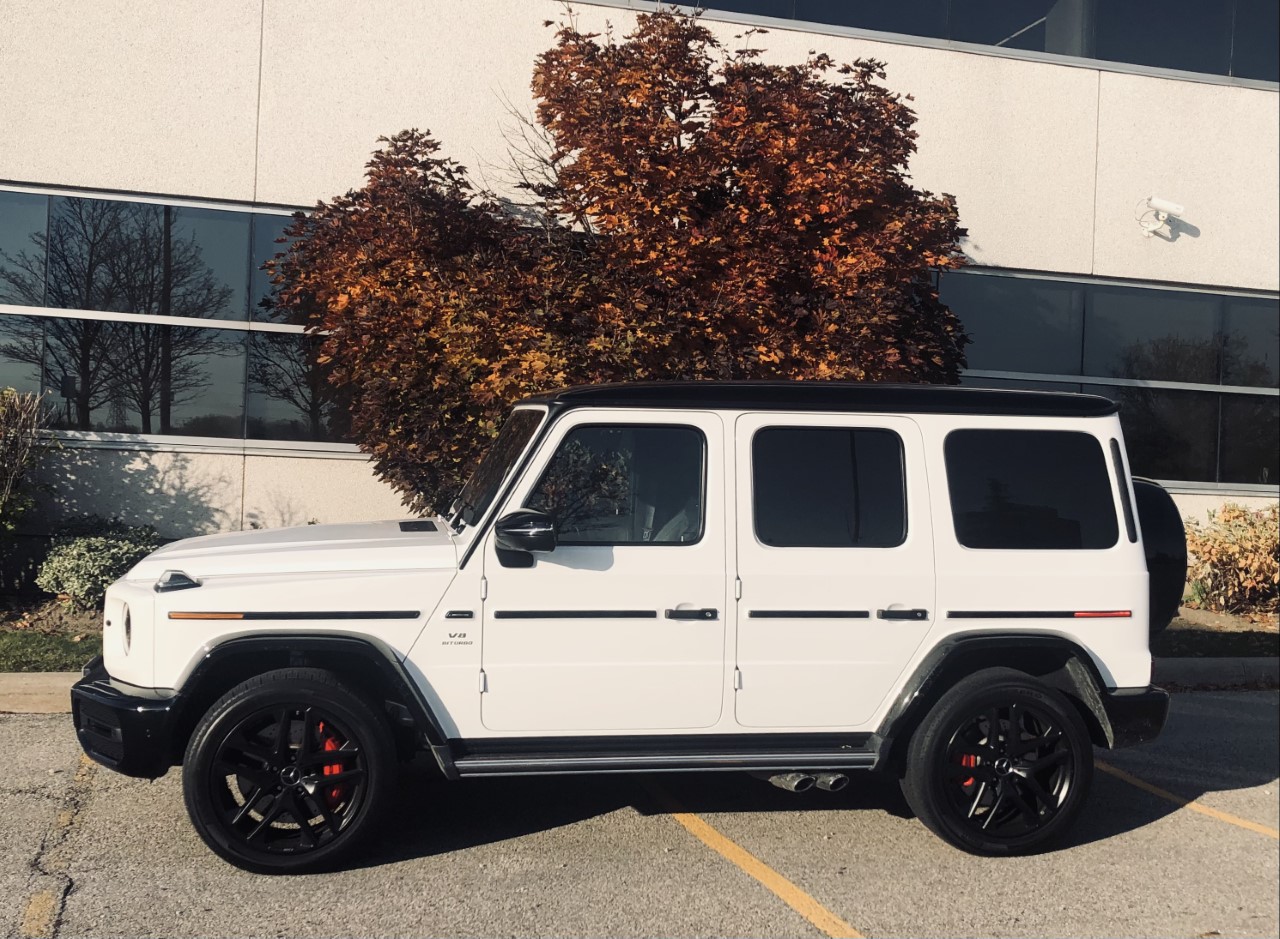 The design is beautiful. The SUV looks like a military vehicle that came to life in WWII. It’s very retro (but very modern at the same time). There are buttons in the door handles (which take a little getting used-to) and a stainless-steel cover for the spare tire and wheel mounted at the back (which means you have to remember to leave room if you back in somewhere and want to open the rear door). You have to slam the doors to shut them properly. This model comes equipped with 21-inch wheels. The red brake calipers stick out a mile and, frankly, are quite sexy. The side running boards, in black, add to its exotic appeal – but more about those later. This design is simple, but exotic. In short, its very attractive.

The 4.0-litre, twin turbo V8 engine is mated to a nine-speed automatic transmission and all-wheel drive, which produces 577 horsepower and 627 lb-ft of torque.  It goes from a dead stop to 100 km/h in 4.5 seconds. There is a large parking lot near Eglinton Ave. East and Spectrum Way in Mississauga that is empty these days because of Covid, so I took the G 63 over there for a test. If you want to know what it feels like to be shot out of a cannon, just come to a stop, take a deep breath and hit the throttle. BOOM! The brakes work well too. The rumble of the V8 – side pipes, by the way – is reminiscent of the Hollywood mufflers that were all the rage when I went to high school in the Fifties.

As this is where we spend all of our time when we’re out in the car, it’s the most important part of any review. First, you’re surrounded by leather. Seats, dash, steering wheel – heated, by the way – you name it and it’s covered by leather. All of the now-standard safety features and ride modes and the off-road settings (I couldn’t test its ability here – I live in a city – but I did drive over a curb in that parking lot . . .) are right there for you as are the infotainment and speaker systems (590-watt Burmester surround sound, FYI). There are two 12-inch screens, one with the gauges and the other for infotainment functions. And the sound the door locks make when they snap shut as you pull away is absolutely unforgettable. The “trunk” space is more than adequate – we did the weekly shopping and my wife was more than satisfied with the amount of cargo space. And then you have lane-keep assist (it really jerks you back into line if you start to wander), blind spot monitoring, rear cross-traffic assist and so on. And there’s a skylight.

Now, let’s take this car out for a drive. It’s easy to slide out of but a bit of a trick to actually get into. I’m not tall enough to be able to slide onto the driver’s seat so I had to use the running board. It’s awkward, because when I stand on it, I then have to squeeze down into the driver’s seat. As this car starts at about $200,000, I suggest that an adjustable running board could be in order. 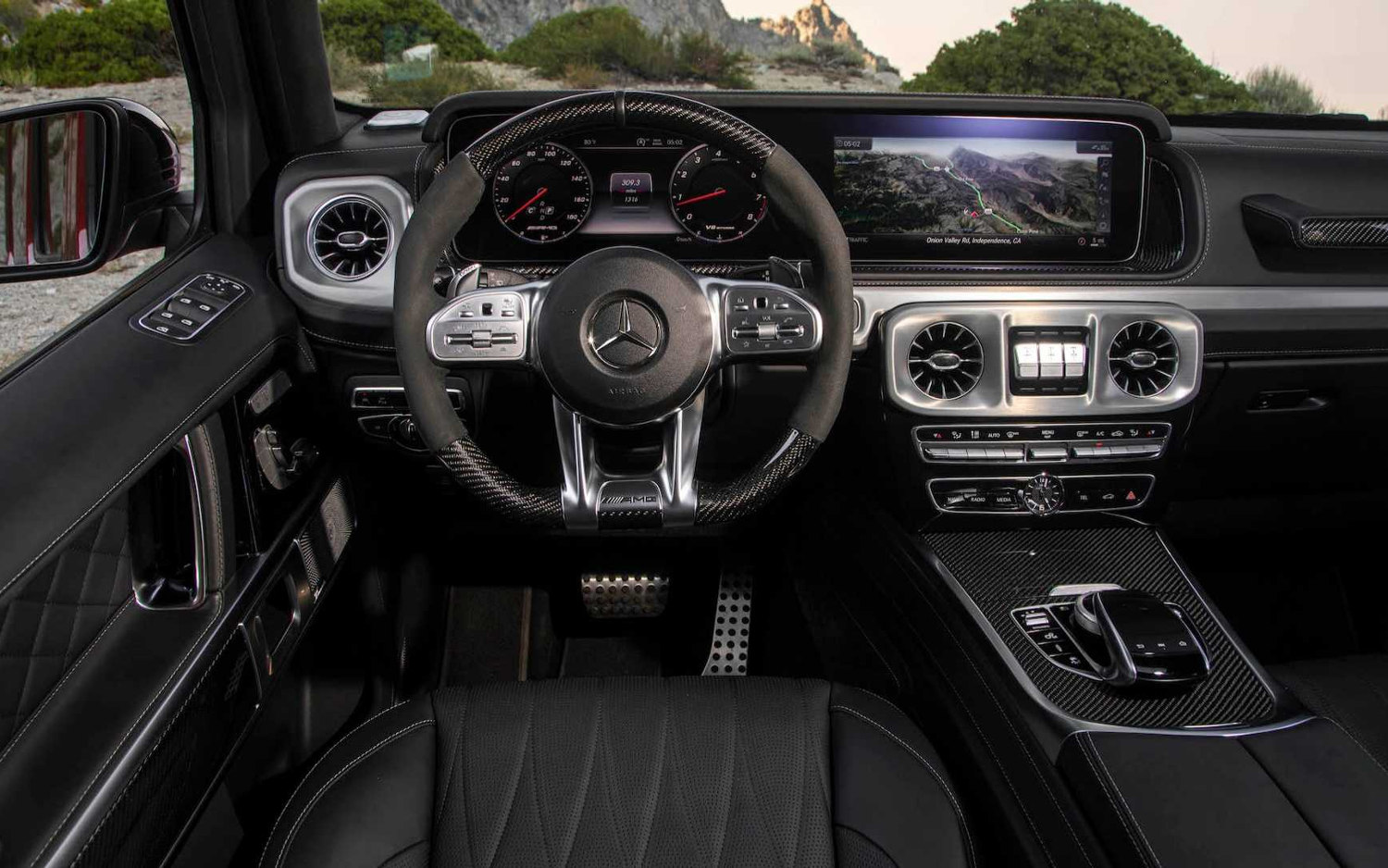 Once inside, though, the seats are oh, so comfortable. You could drive to Nova Scotia (if you could – Covid, you know) and arrive without an ache brought on by 1,800 km behind the wheel. The headrest is the best I’ve ever experienced.

Speaking of the seats, once you get yours exactly the way you want it, you can lock in the settings and it “remembers” you the next time you climb in. Once in motion, and you go whipping around a corner, the active multi-contour seats ensure outstanding lateral support. Translation: the seat envelops you, much like your mother would put her arm around you and hold you in place when your dad was showing off when you were a kid.

“I don’t like the sun visor. I’m a tall girl and I like my seat all the way back and when I turn the visor to block the sun coming in the passenger window, it doesn’t go far enough back to shade me from the sun. I don’t like the consol. It looks like a touch screen but it’s not. I don’t like all the snappy buttons down here. I know it’s old school but we’ve moved on from this.

“I don’t like that there’s not more places to put my beverage, meaning I don’t find it passenger-friendly. For instance, the gauge showing the temperature outside is all the way over there on the far left of the console in front of the driver; I can’t see it.” 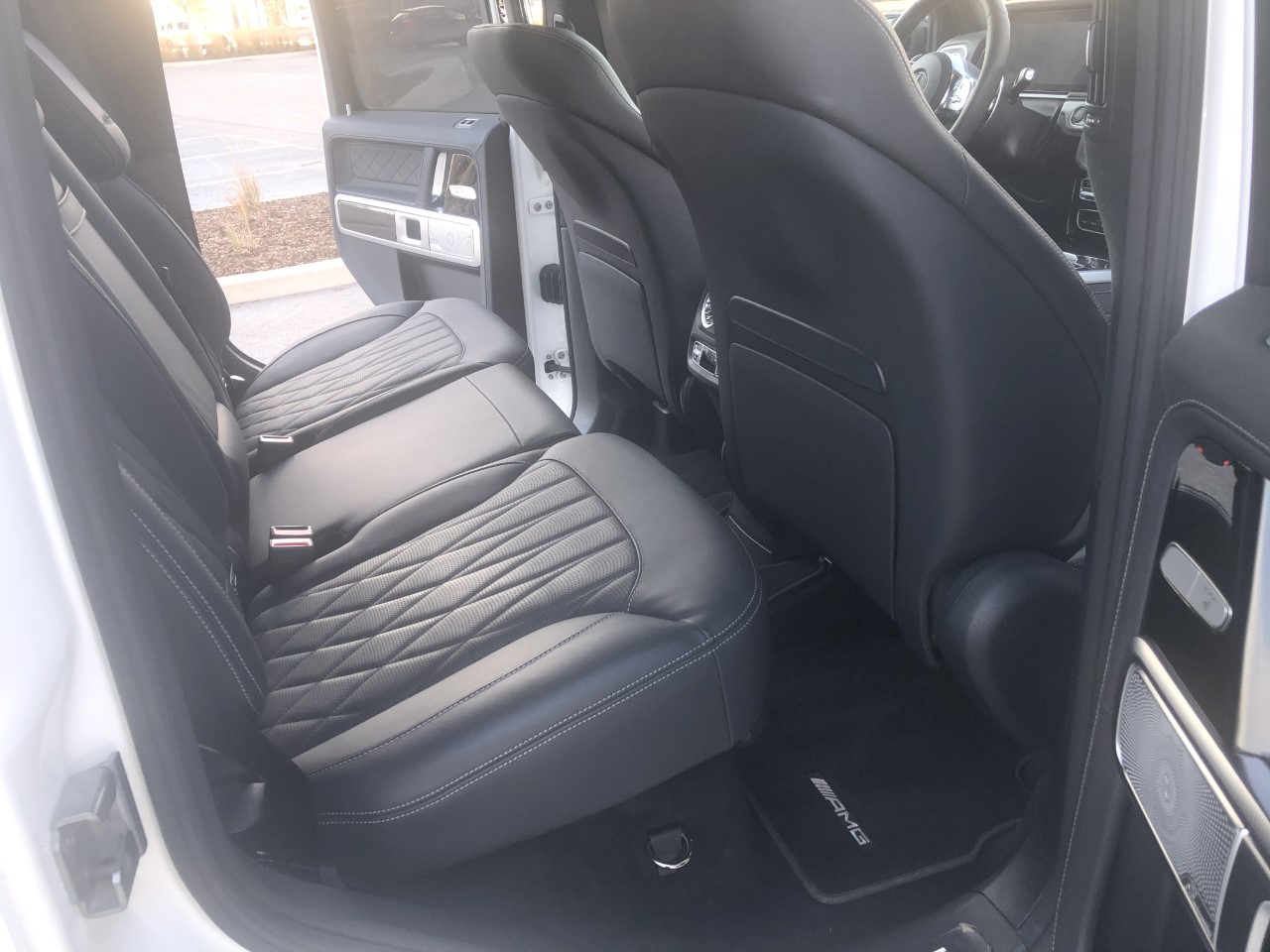 Gee, I’m glad I didn’t ask her how she really felt.

She wasn’t completely negative. “I like that I can control my heat and air-conditioning and that you can control yours. That’s a plus. I really, really like the ambient lighting system and the colour green is my favourite.”

Her observations are valid, although I tend to see more good than bad in this G wagon.

I do have two nitpicks, however: There is NO back seat room. It looks like a big car till you get into it. My wife and I are both tall and we both like our seats all the way back. As she said: “If my mother is with us, she would sit in the front and I would have to sit in the back and I just couldn’t.”

And it inhales gasoline: combined fuel mileage (average) is between 16 and 17 L/100 km. The start/stop function is of some help, however.

Other than that, and if I happened to have $200,000, the good far outweighs the bad and this vehicle would be in my driveway permanently.