Most SUVs, even the ones with real performance credentials are largely uninspiring to drive. It comes down to simple physics. Add weight, raise a car’s centre-of-gravity and spec an off-road inspired suspension and road feel and driving dynamics will suffer.

Unlike wagons, which are very much like having your cake and eating it, a crossover is a compromised device: good for families and hauling stuff when required but not the first choice for a Sunday drive.

With SUV demand skyrocketing and car sales dropping, the number of performance-badged, track-special SUVs on the market have risen exponentially. We live during a time when there are more trucks on sale with legitimately quick Nurburgring lap times than there are minivans to choose from.

Most of those feel like, well, the family crossover they’re based on, except ruined with too much power and rock hard suspension. You know, because Nurburgring.

They might be fast on a circuit but only if your name is Sabine Schmitz. For the rest of us, they can be a bit much and certainly not a replacement for even a modest sports car.

Look hard enough, though, and you’ll find a few that are genuinely good. Like the Alfa Romeo Stelvio Quadrifoglio. Say what you will about Alfa reliability but they sure know how to make a vehicle feel spectacular, at least until the warranty runs out. And after recently driving the 2020 Mini John Cooper Works (JCW) Countryman, I’m adding it to my list. For the uninitiated JCW denotes the sportiest and most powerful models in the Mini lineup. Like M3 is to the BMW 3-Series. 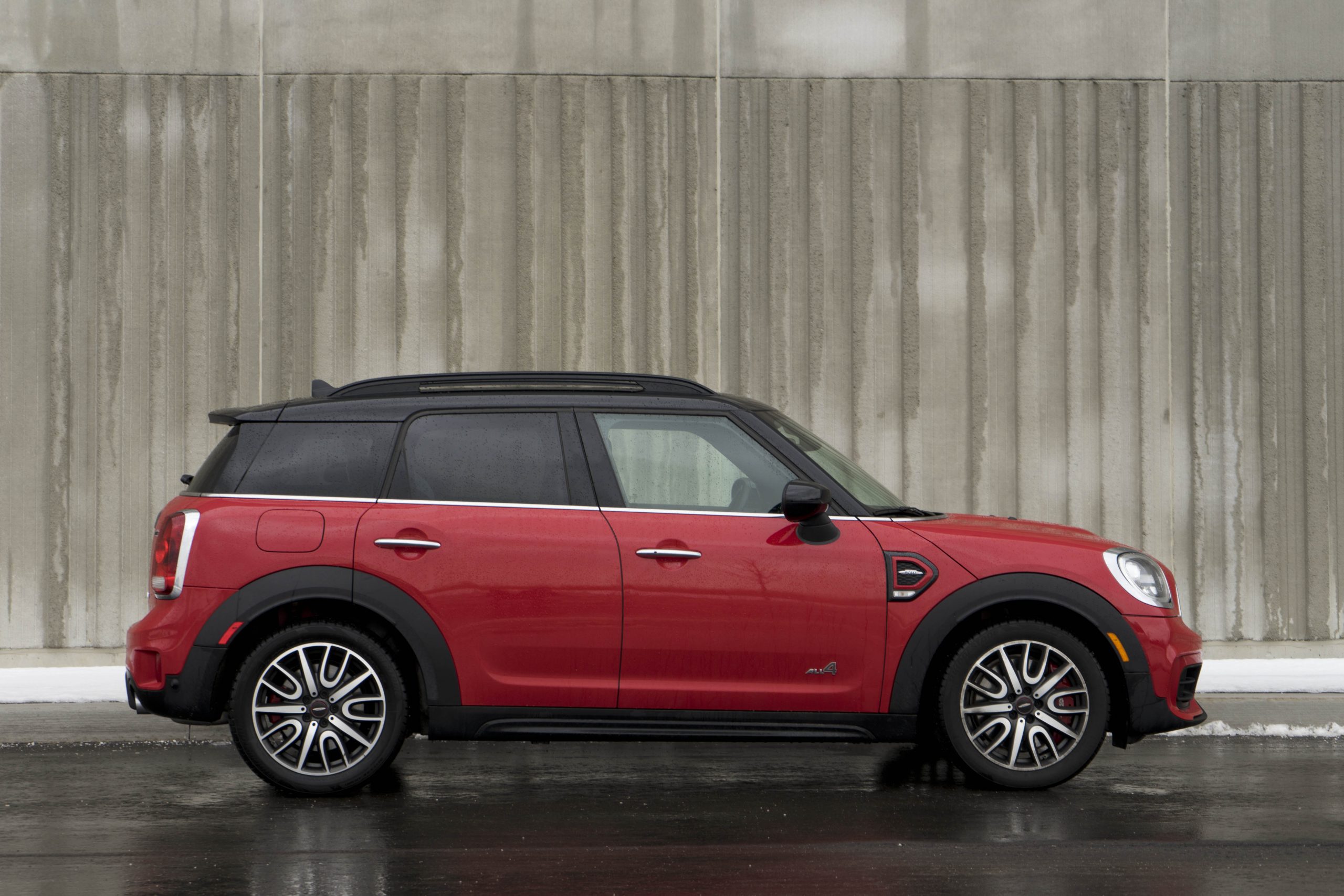 This little red firecracker genuinely surprised me. Minis are a riot, always have been. These cheeky little cars symbolize driving fun in a compact package but turn one into a crossover and you risk losing that character. It’s a good thing then the Countryman retains all the good bits of Mini DNA.

Based on the same chassis as BMW’s X1 and X2, this front-wheel drive based crossover is small, with a footprint similar to the Lexus UX and Volvo XC40 subcompacts but it packs a much bigger wallop under the hood than you’d expect. Also sourced from the X2 M35i, the transversely mounted turbocharged 2-litre 4-cylinder in the JCW Countryman makes 301 hp and 331 lb-ft of torque, a significant 73 hp and 73 lb-ft of torque over last year’s figures. It’s enough to propel it from 0 to 100 km/h in just 5.1 seconds and also earns it the distinction along with its JCW Clubman sibling of being the most powerful Mini ever made.

If there’s one thing I’m not sold on it’s the styling. I like quirky and weird cars but the googly-eyed headlamps and the catfish-like face isn’t the nicest thing to stare at. The family resemblance is there, though, and if you’re a fan of the Mini brand you’ll probably be ok with this. 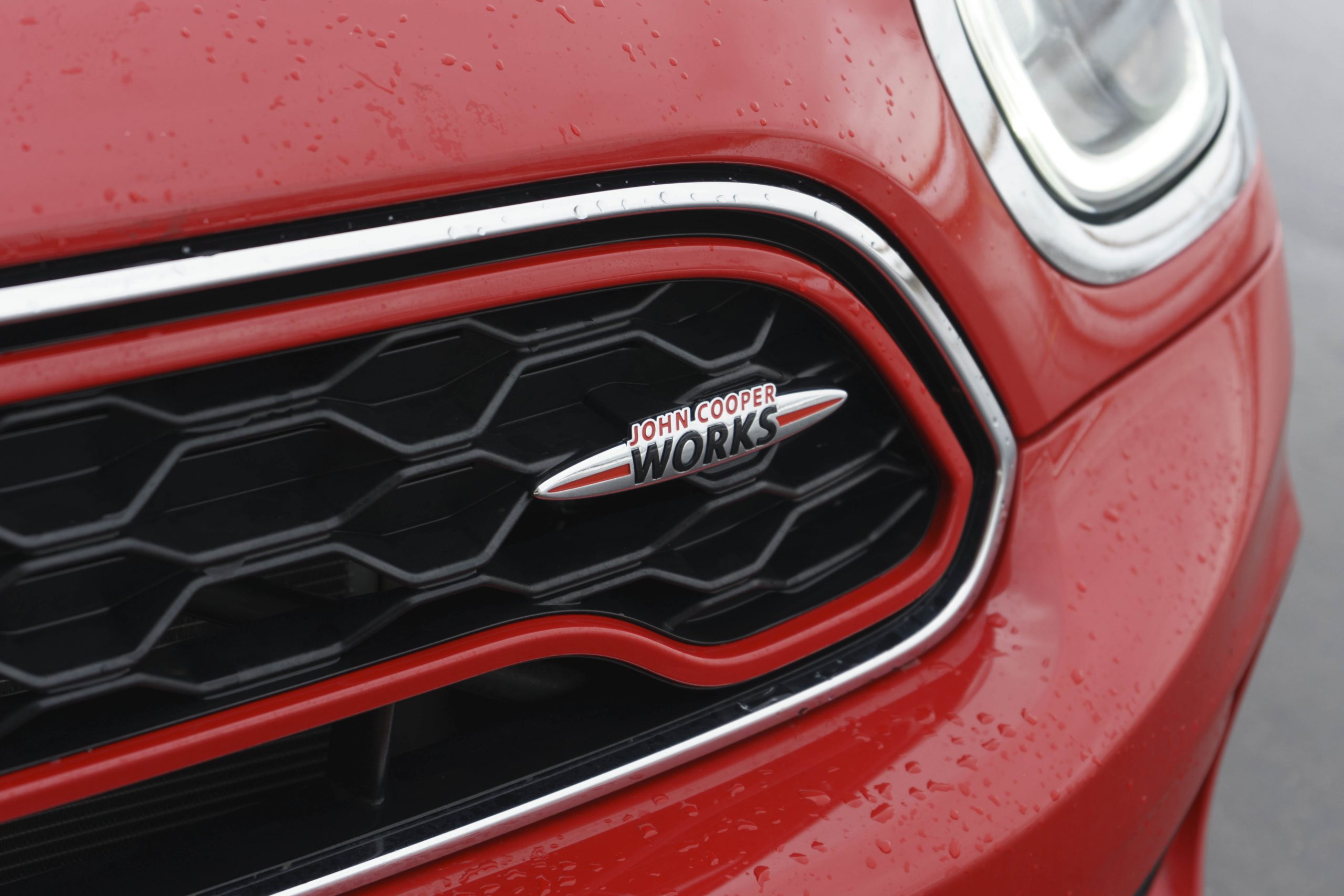 Things get even stranger on the inside but those familiar with Mini interiors will be instantly comfortable.

A giant fishbowl-like circle front and centre dominates the cabin and contains the infotainment screen and radio preset buttons. Smaller gauges for speed, RPMs, and fuel sit directly in front of the driver. While the main screen is on the smaller side the LED light ring that runs around the fishbowl is more than just ambient lighting. Turn the stereo volume up or down and the rings changes to show you its position. Same thing with the climate controls and fan speed, change their levels and it gets indicated on the ring. It also doubles as the parking sensor turning from green to yellow to red as you close in on an obstruction or another vehicle. A slick feature you won’t see in anything else and excellent use of dashboard real estate. 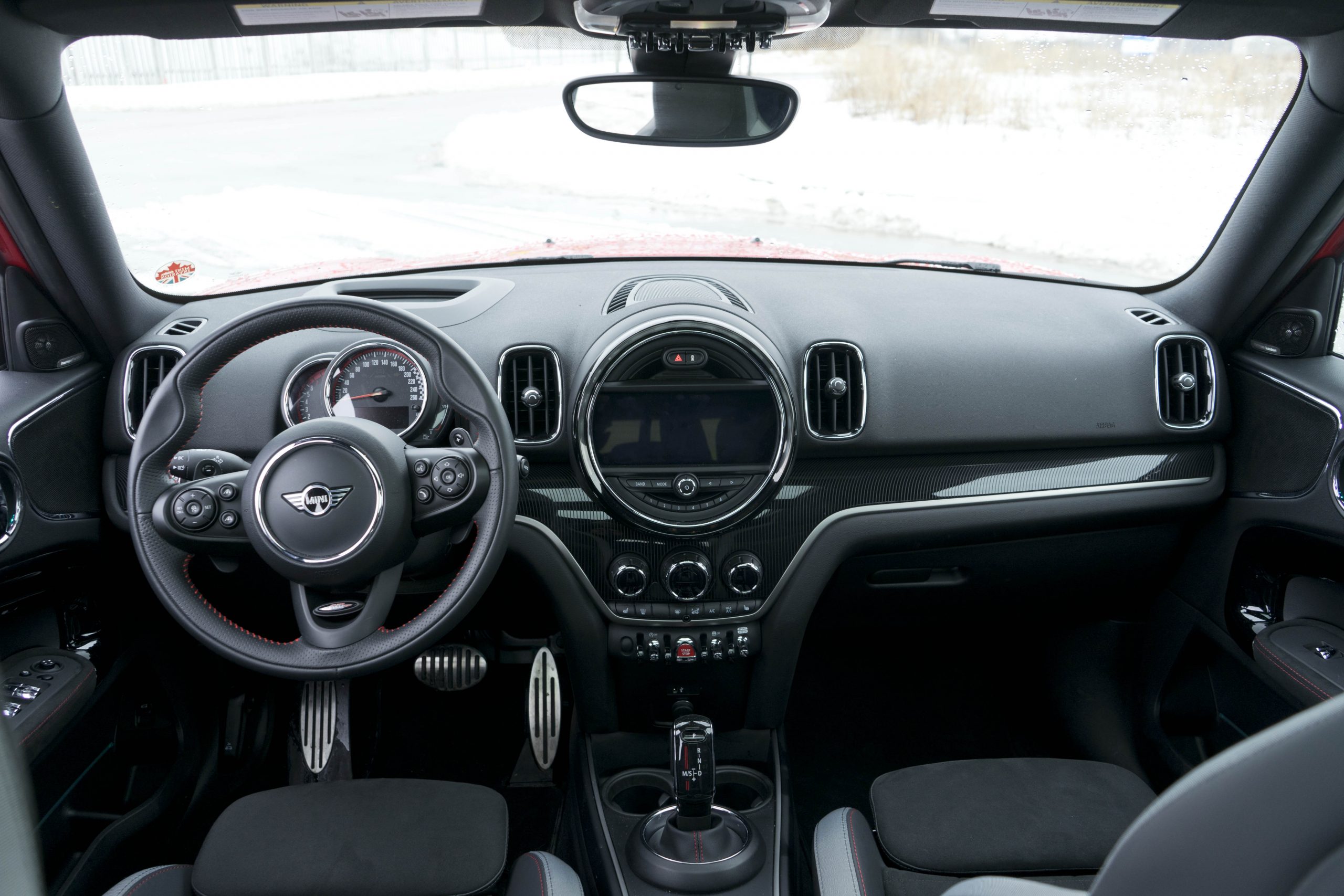 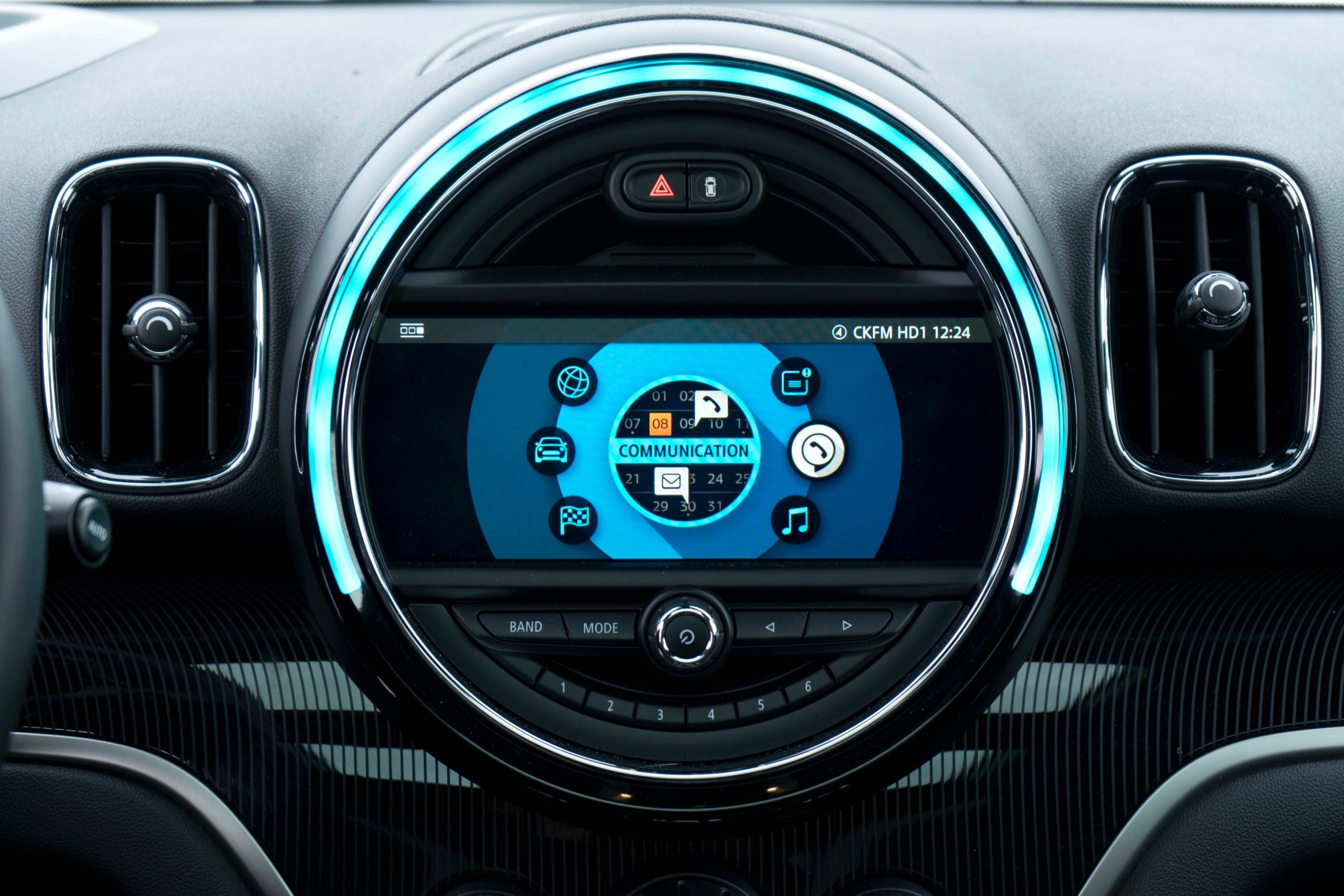 Get out on the open road and things go from good to better. The steering is sharp and the starchy suspension keeps body roll to a minimum, yet the ride doesn’t suffer much. When the road gets twisty the Countryman responds more like a sporty wagon than a trucklet. It’s agile and you never get the sense it’s going to tip over if you push too hard. And you might find yourself doing that more often than not because the JCW Countryman is genuinely fun to drive.

The effect of 300 hp in what is essentially a bloated hot hatch is also quite significant, but this Countryman has a few other tricks up its sleeve. ALL4 all-wheel drive, a quick-shifting 8-speed automatic, and a limited-slip differential integrated into the transmission ensure that this little Mini leaps off the line and rips through its gears bellowing a rorty exhaust note that brings to mind visions of rally stages.

The sport exhaust is loudest in the Sport drive mode, naturally, and subdued in Mid or Green. Each driving mode will alter engine response, steering, and sound and if you specify the optional adaptive dampers (at $500 you absolutely should) it will alter the damper rate as well. In Mid (Comfort) mode with adaptive dampers specced the ride is suitably firm but not uncomfortably so.

That’s good news for when you want to use your Mini for more than a joy ride and this one is very good at being a crossover in addition to that sports car you’d rather be driving. You get rear seats that recline and slide back and forth and a generous 498-litre cargo area that will swallow strollers and groceries with ease. Folding the rear seats down expands that to 1347 litres. That’s more than you get in a Volvo XC40 or a Lexus UX. 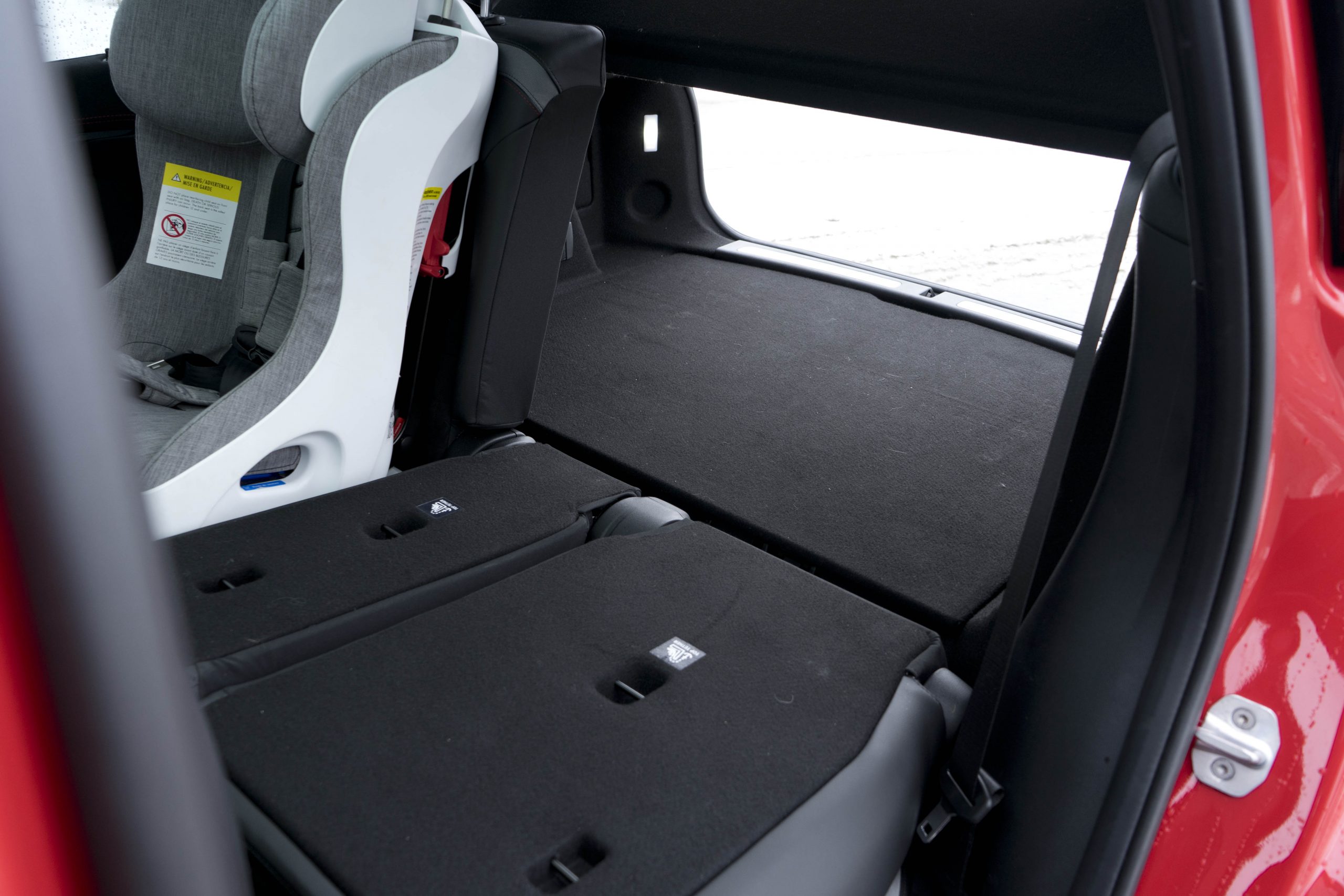 There’s also a good amount room in the back for a couple of adults or kids to be happy but I’d probably skip the $2250 Dinamica suede/leather upholstery on my tester as nice as it is, especially if you have little ones.

Sporty front seats are extra huggy around the torso and legs but still proved very comfortable. Being the top-end trim, there’s a lot of standard kit here including JCW specific seats, steering wheel, shift lever, anthracite roof liner, LED headlamps, keyless entry, driving modes, and a 6.5-inch centre display. An 8.8-inch screen is optional and comes with Connected Navigation Plus. Apple Car Play is standard across the board.

Dynamic cruise control is also standard and you can tack on the optional driving assistant, which adds road sign detection, pedestrian alert, and auto emergency braking.

Standard performance upgrades over stock include a heavy-duty cooling system, upgraded brakes with larger rotors and 4-piston calipers up front, a sports exhaust, limited-slip diff, and upgraded motor and chassis mounts. JCW specific bumpers and grilles along with JCW badging help distinguish these from a more pedestrian Countryman. 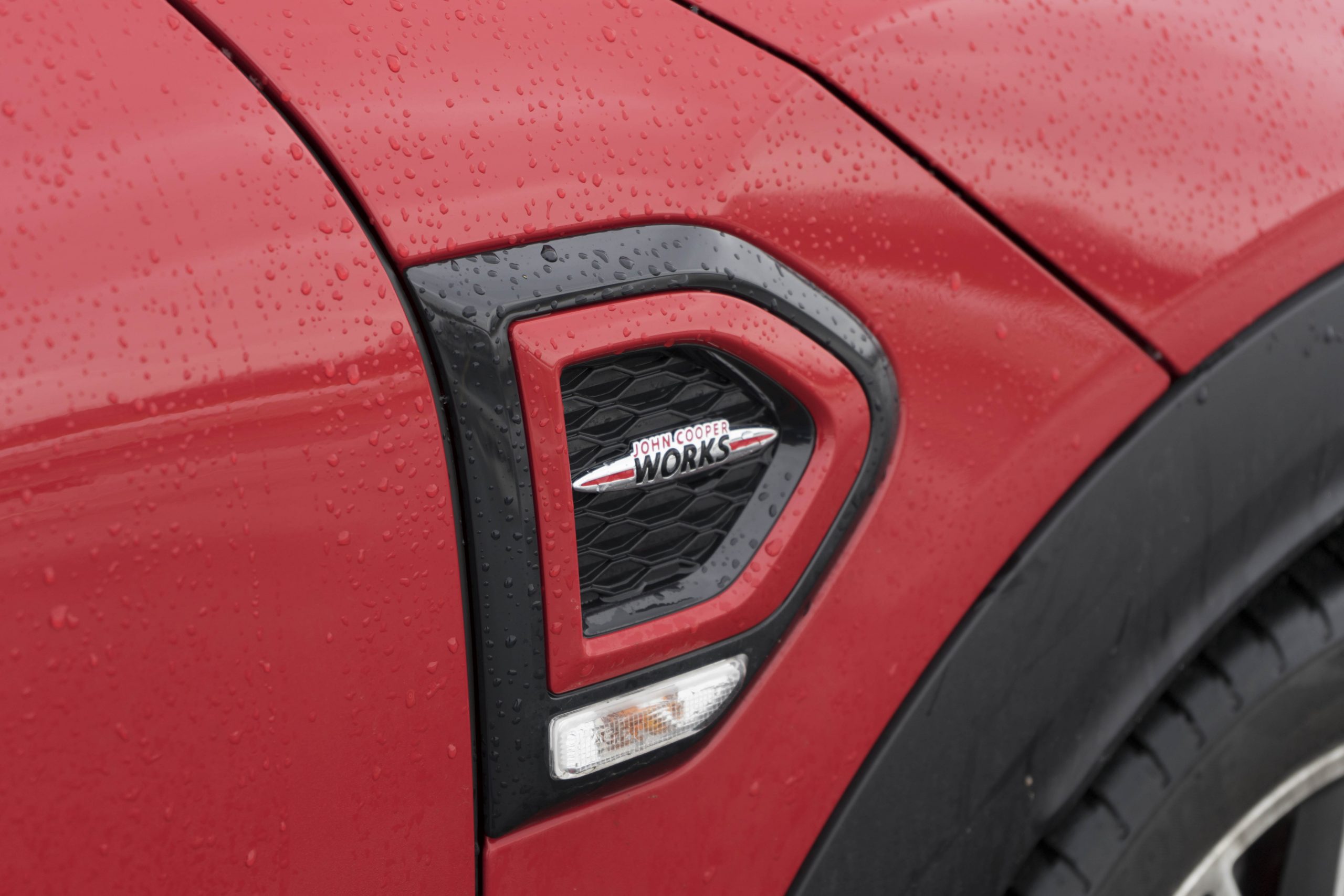 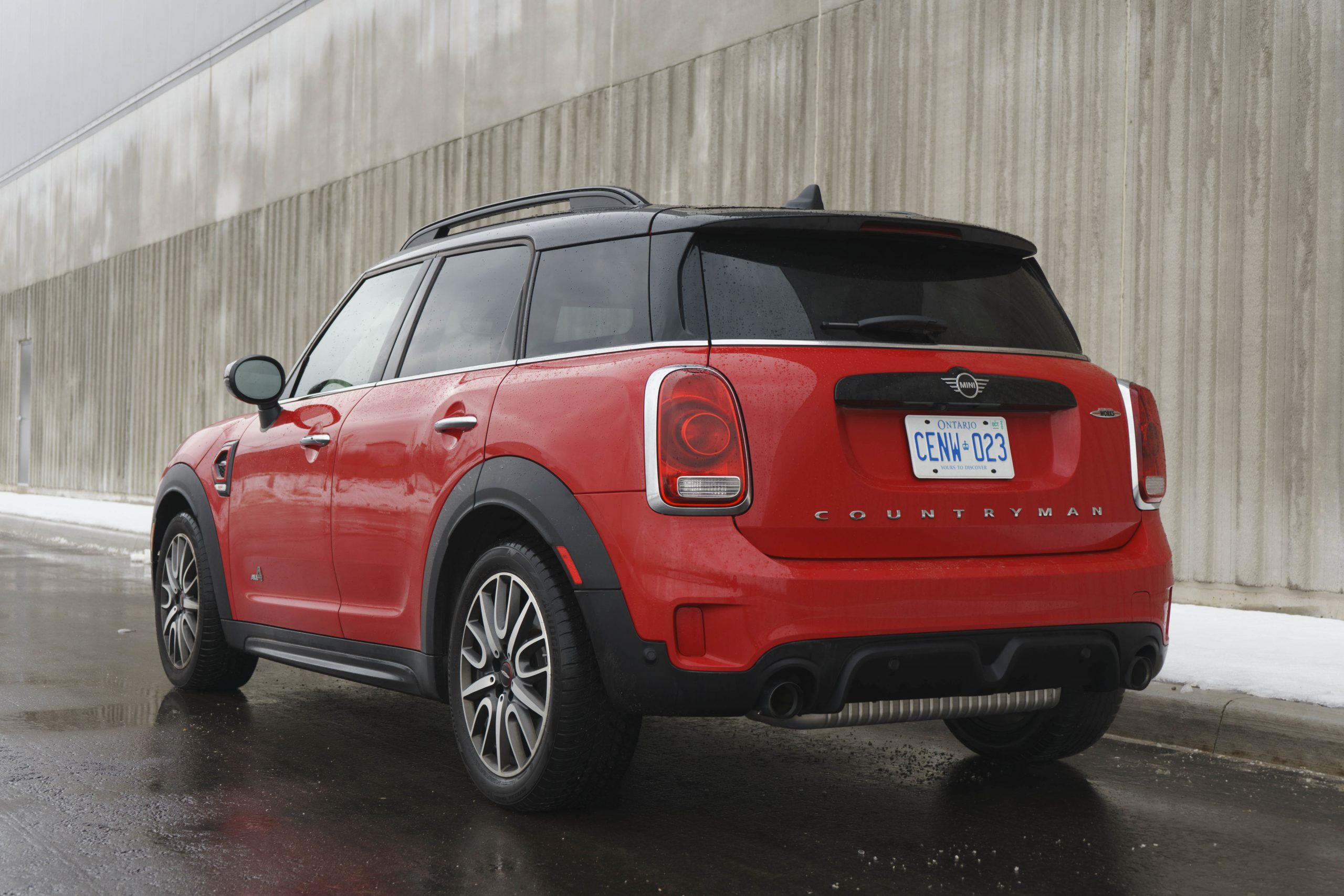 The JCW Countryman is based on the BMW X2 as I mentioned earlier but it is a fair bit cheaper and comes with more standard content. If you look at it as a way to get a premium automobile for a lower price tag it seems like a good deal but a starting price of $43,090 is still rather steep for a subcompact SUV that has a lot of plastic interior bits and doesn’t carry a status-boosting BMW badge. With that said, I’d rather have the Mini mainly because it’s not as serious as the X2. That Mini quirkiness is rather endearing and also unique in a world of milquetoast vehicles.

My favourite thing about this JCW, though, is how you tend to completely forget that you’re in a crossover. You’ll actually look for reasons to drive and that’s not very common in this category. This is a vehicle for the family but it can also be just for you. There’s little compromise here.