This adventure machine doesn’t apologize for what it is.

Very much like human beings, some vehicles simply refuse to change, preferring to hang onto old principles as if their very existence depended on it. The Toyota 4Runner is that kind of car. It’s old, not particularly tech savvy or very efficient. Yet, it’s still among us, selling well over 130,000 units each year in the US and Canada combined, and adored by adventure junkies alike.

The message is therefore clear at Toyota: if you’re looking for a smooth, refined and fuel-efficient utility vehicle, there are plenty of alternatives within its lineup that’ll fit the bill, things like the C-HR, the RAV4, the Highlander and heck, even the Sienna minivan.

The 4Runner, then, is one of the last survivors of the original “sport utility vehicle” ethos; a roughneck machine that was conceived for one specific duty. What was once Toyota’s only SUV within its lineup has morphed into a niche, off-road-ready toy that’ll trade punches with a Jeep Wrangler in a tough trail all day. 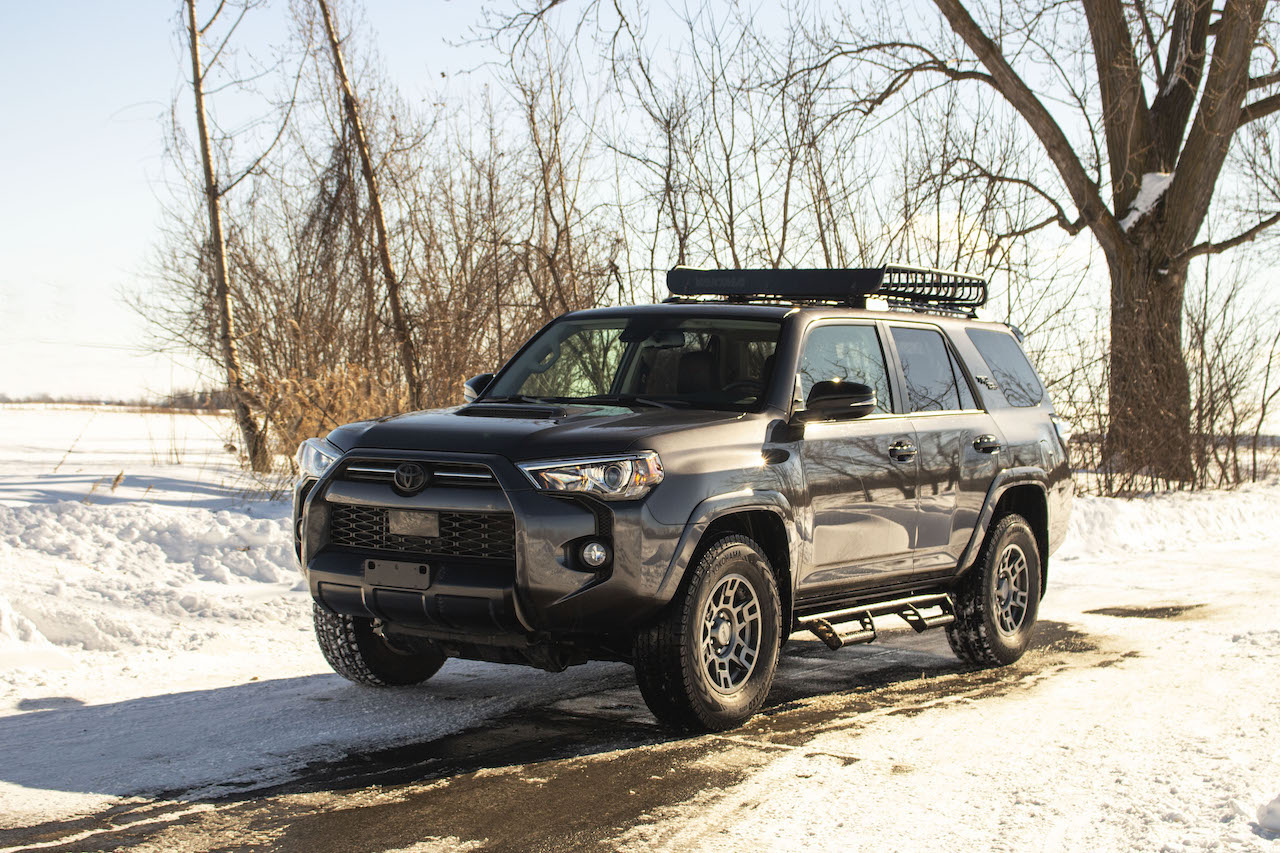 With all that in mind, it’s totally acceptable to forgive the 4Runner’s undeniable flaws. It’s big, but not particularly roomy inside. Seating positing is fine, but not great. Seats are a bit hard and the five-speed automatic gearbox that’s bolted onto the ageing 4.0-liter V6 is clunky. Oh, and don’t get us started on fuel economy. You’ll be lucky if you get a 15L/100 km average.

Power is rated at a very conservative but oh-so-reliable 270 horsepower and 278 lb-ft of torque. There’s only one engine available and all models comes with a shift-on-the-floor four-wheel-drive system. Max towing is rated at 5,000 lb (2,267 kg).

For the 2020 model year, Toyota’s iconic off-roader receives a bunch of minor tweaks. Among them is Toyota’s Safety Sense P (TSS P), an integrated suite of driver-assistance features including a pre-collision system with autonomous braking, adaptive cruise control, lane-departure warning and automatic high beams. It’s standard on the truck now, as well as Android Auto and Apple CarPlay compatibility through two new screens ranging from 6.1 to 8.0 inches in size. 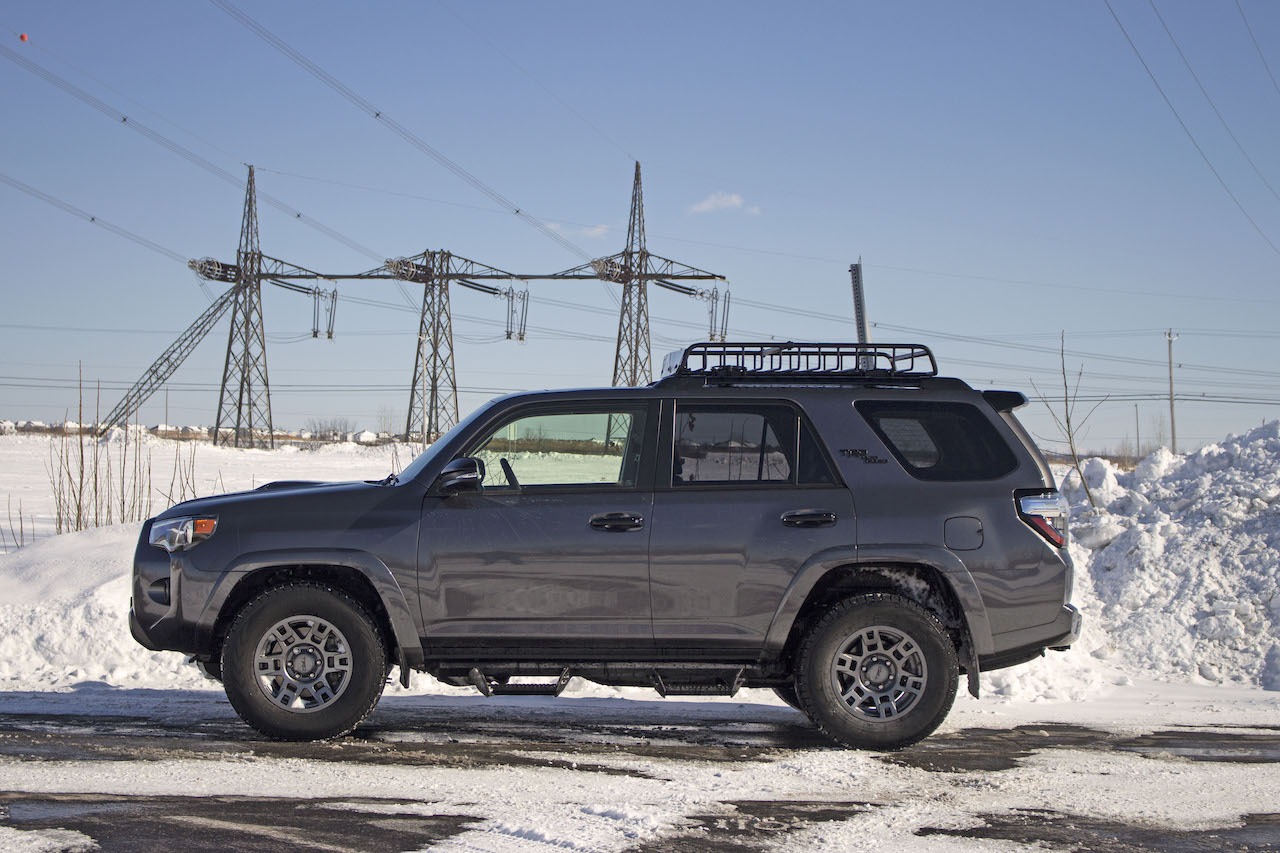 The model you see here is a 4Runner Venture, a newly added package, which sits right smack in the middle of the lineup for the lofty sum of $57,459. While a base 4Runner kicks off at $50,459, the Venture package adds $7,000 to an already well-equipped vehicle.

It comes with TRD Pro-style goodies at a more affordable price. Things like graphite-finish 17-inch wheels, “Predator” side steps, an adventure-ready Yakima roof rack, Toyota’s Crawl Control + Multi-Terrain Select system and a slew of aesthetic add-ons, as well as blacked out everything. It all transforms the 4Runner into a properly sinister-looking SUV.

The Venture package only comes in three available colors: Midnight Black Metallic, Super White and Magnetic Grey Metallic, like the one you see here. 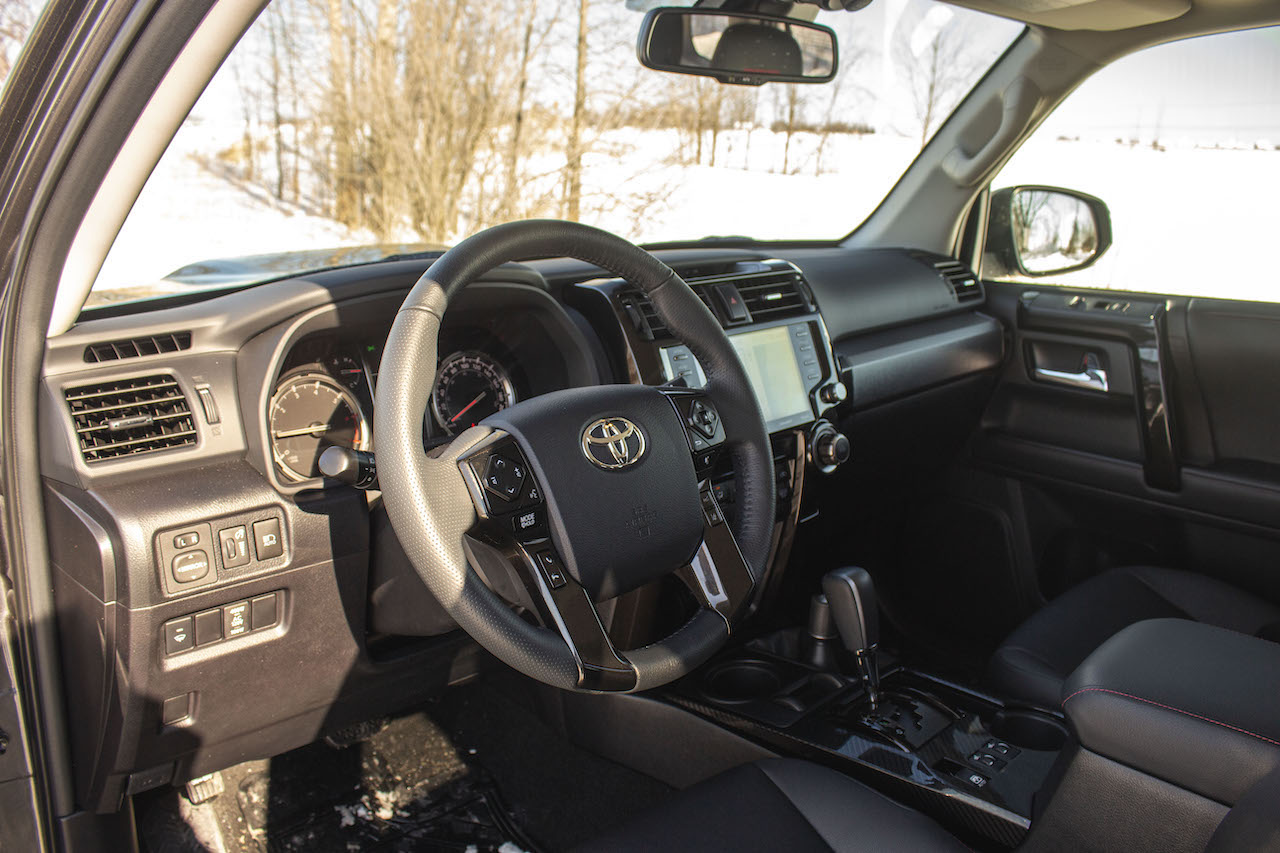 Because the 4Runner is better at home out on the trails, it wasn’t exactly tuned for urban driving. Very much like a Wrangler, expect this Toyota to exhibit a fair amount of body-roll and body oscillations when driven over rough roads. It’s not a handler, nor a performer, but we did appreciate the hydraulically-assisted power steering’s smoothness.

We did, however, notice how much wind noise that roof rack creates at highway speeds, all while considerably affecting the already awful fuel economy. So, unless you count on using it, we don’t recommend opting for the Venture model.

That being said, the 4Runner is a smoother machine to drive on pavement than a Wrangler. The cabin itself, while spartan in design, is utilitarian, with well-placed controls, seemingly endless amounts of storage and fantastic noise insulation, not forgetting the ever-so-cool power rear window.

This is a vehicle that isolates you from Mother Nature’s gruelling elements, instantly making you want to escape into the wilderness the moment you strap yourself in. 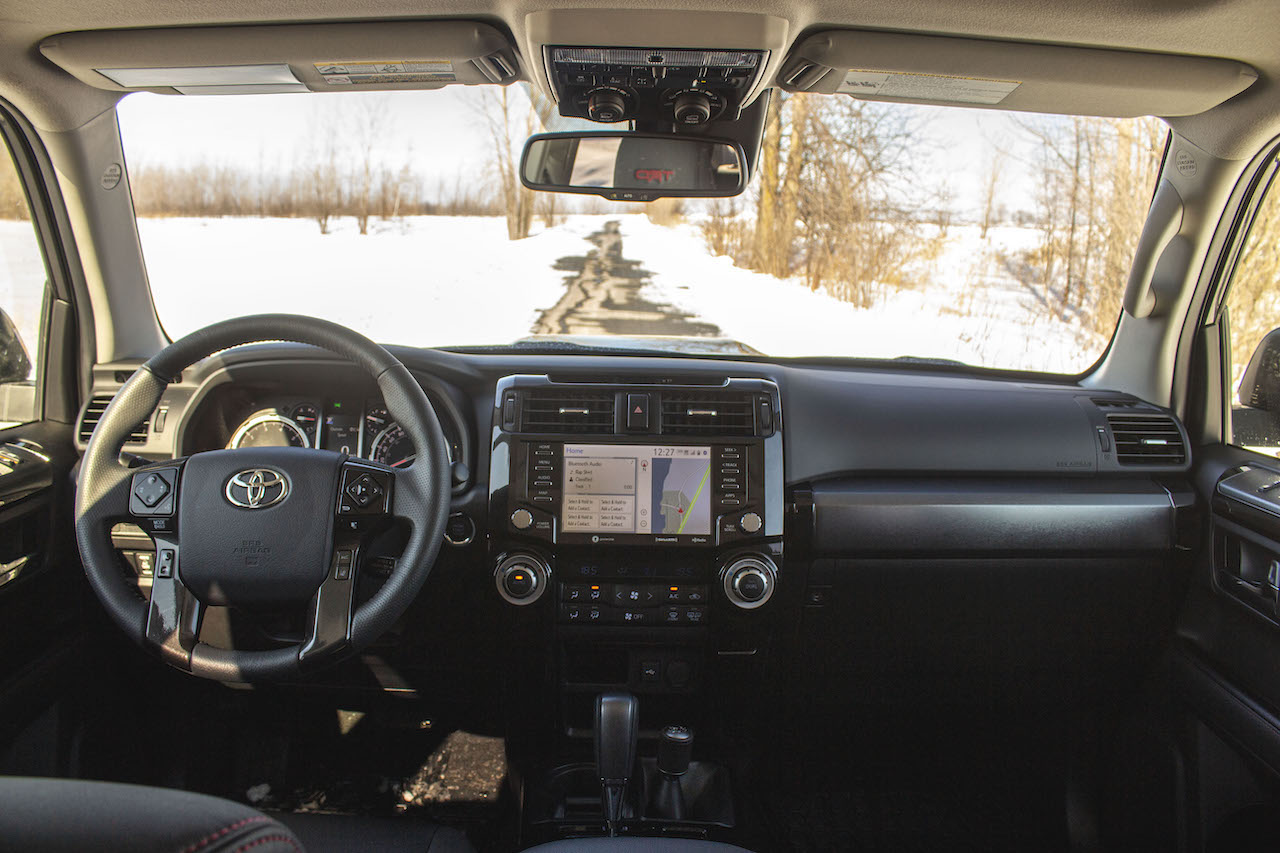 While the 4Runner sits in the midsize SUV category, it can only seat five, and not seven or eight like some of the similarly sized vehicles in this class. Once relatively alone in this space, with perhaps the Jeep Grand Cherokee, the 4Runner now competes against new arrivals like the Honda Passport, Hyundai Santa Fe, Chevrolet Blazer, and the newly introduced Volkswagen Atlas Cross Sport.

However, none of those so-called SUVs can follow this Toyota in a muddy trail.

What the 4Runner lacks in passenger room, it makes up for with a cavernous cargo hold. Default trunk space is rated at 1,336 liters. Lower that rear bench down to the floor, and the 4Runner will engulf up to 2,540 liters of your gear. This beats the Jeep Grand Cherokee (1,934 liters) and the Chevrolet Blazer (1,817 liters) but remains a tad smaller than a Honda Passport (2,851 liters).

Power from the V6 engine is ample and butter smooth, while the five-speed gearbox can be at times rough given its limited number of gears. This is the old-school way of delivering power where you’ll need to really commit to a full-on stomp of the accelerator pedal for it to drop a few gears. 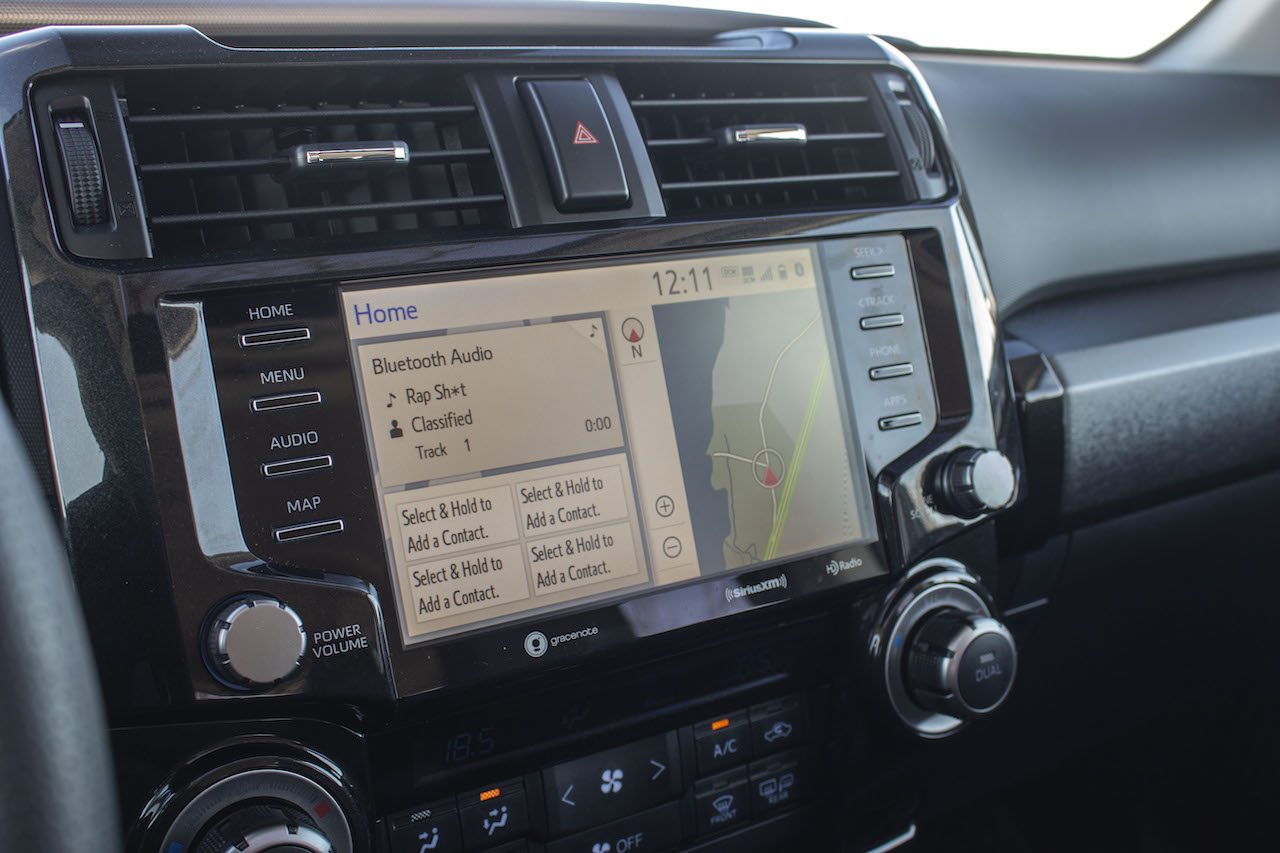 Take the 4Runner out in the open, however, and you instantly sense that this is what it was built for. Unlike modern SUVs who claim to be off-road ready, the 4Runner is crammed with a full array of actual grip-enhancing toys.

For instance, there’s a full-on rear locking rear differential and a two-speed transfer case that’ll allow you to shift between rear-wheel-drive, four-wheel-drive high and four-wheel-drive low. There’s Crawl Control, essentially an evolved hill descent system that let’s the truck do its thing through the thick stuff, at low driver-selectable speeds. Then there’s the Multi-Terrain Select system that allows you to configure the truck’s traction control system according to different surfaces, ranging from rocks, sand, and mud. And it’s all controlled via large chunky knobs, shifters and buttons, further enhancing the 4Runner’s bulletproof credibility. 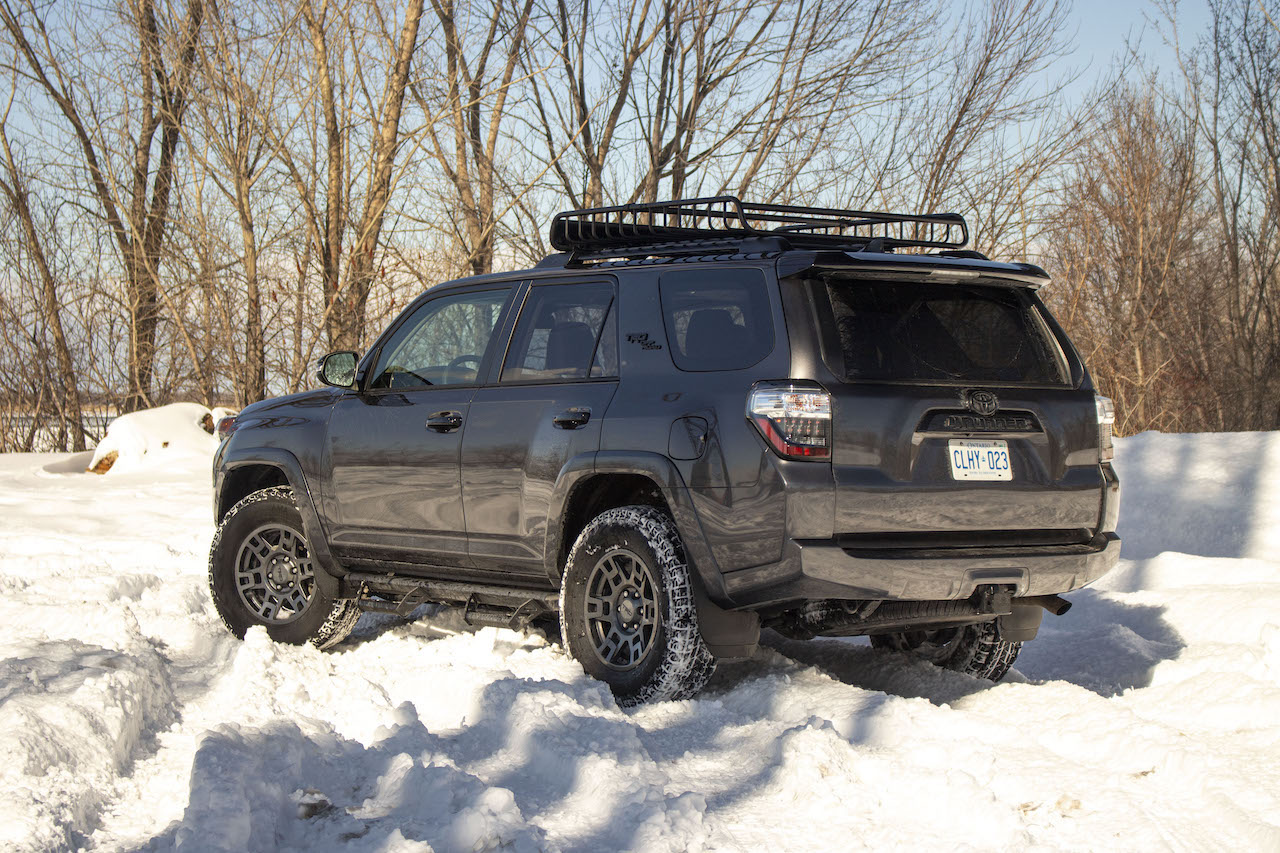 It’s therefore impossible to hate the 2020 Toyota 4Runner for what it is, as it’s one of those rare vehicles that stays true to its core values. There’s no denying this thing’s charm. Everywhere we drove it, people gave us positive reactions, comments and stares.

Yup, it’s expensive, bad on gas, and not all that refined, but the 4Runner cares not what you have to say. If you’re not happy with it, just look the other way. Meanwhile, this Toyota is perfectly content being one of the last true sport utility vehicles currently on sale.