It looks like a youth-oriented vehicle should and it puts on no airs. I’m sold.

While Toyota has been drastically updating the look of their entire line-up, to the point where they’ve even TRD-ized the – wait for it – Camry, the C-HR compact CUV (“compact high rider”, if it helps) still remains the eye-catcher of the group, just as it did when it debuted in North America for the 2018 model year. It is the wildest-looking Toyota for sure and one of the most adventurously-style CUVs you can get in Canada. Heck, I can’t think of many vehicles sold in Canada in general, this side of a handful of exotics – that look as alien as this. Sure, it looks a little tamer as the wheels get smaller and the colours dimmer, but even then, it remains an eye-catcher.

Not one to rest on its laurels, Toyota has updated the C-HR’s styling for 2020, giving it a new front fascia, restyled headlamp lenses as well as new wheel designs and colours — including the 18” rims and the Supersonic Red exterior colour seen here. The contrast-colour roof remains, but is silver this year as opposed to white previously.

Unfortunately, we don’t get the way-cool progressive rear turn indictors European models get. Shame, that.

Inside, not much has changed but 2020 does see the arrival of Android Auto support as standard. It joins Apple CarPlay, available since last year. I do have to take Toyota’s word for it, though; plugging in my iPhone 8 was met with, well…bupkis. No Apple CarPlay activation and not even any indication that my phone was charging, leading me to believe that there was a faulty connection behind the USB port. Which, unfortunately, is the only USB port in the cabin. More on this later. 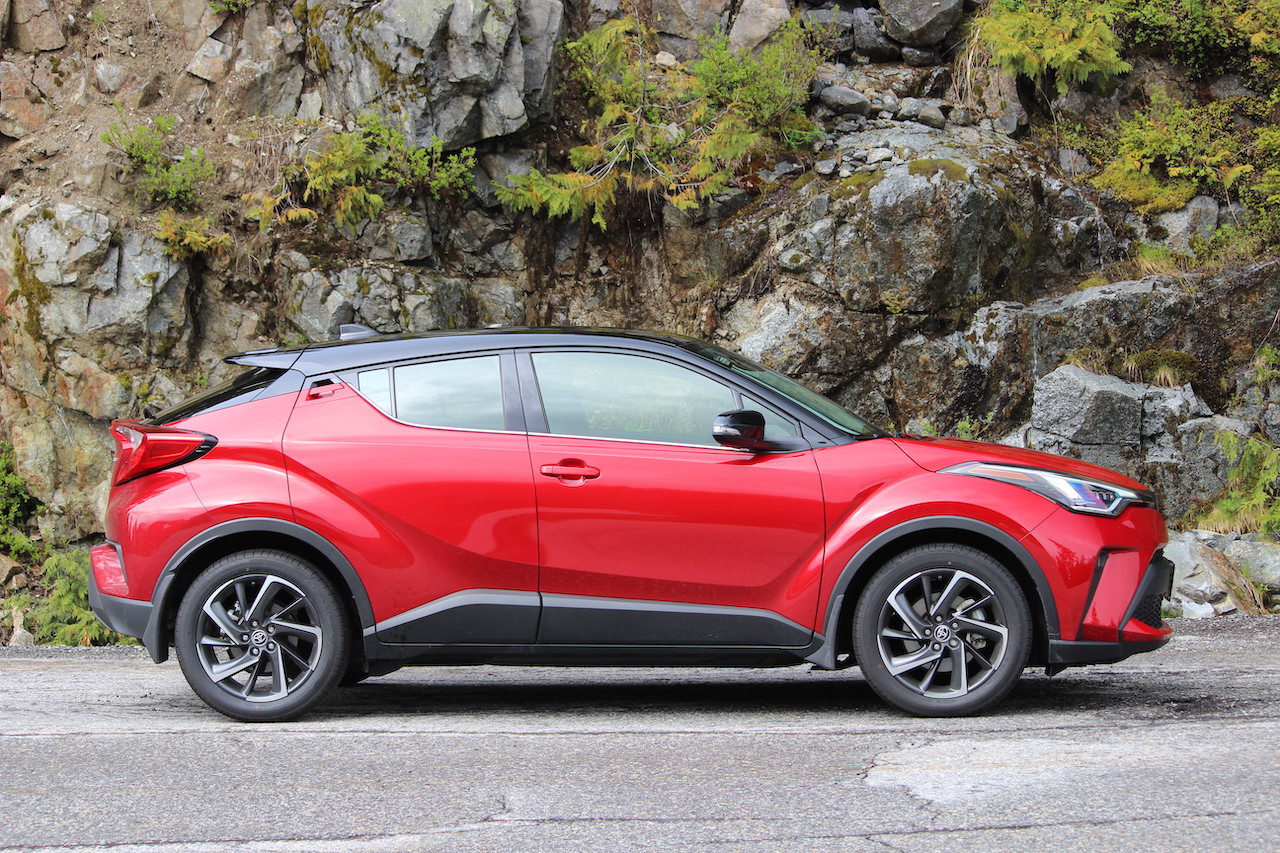 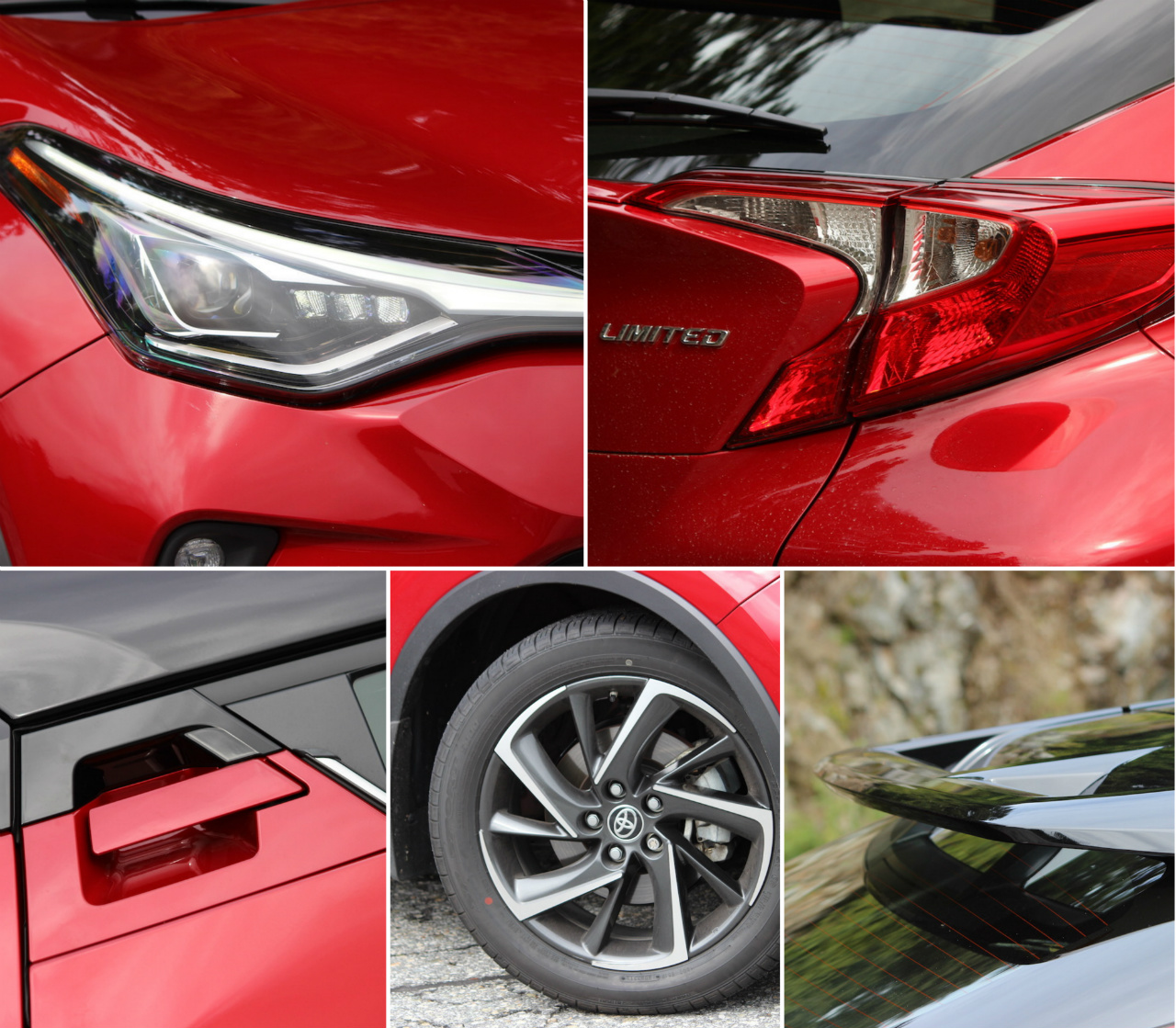 While the C-HR is of the subcompact crossover variety, you might not feel it once inside. Toyota has performed a masterclass in interior packaging with the C-HR, as the driver position is good (helped by power seats and a tilt and telescoping steering wheel) and I encountered very few instances of errant elbows or knees cracking against rough plastic and so forth.

Thinking that all the interior volume had been used up on the front seat, I expected a contortionist scramble to get into the back seat, but no. The seats are mounted low so you aren’t crammed into the headliner and even with the driver’s seat adjusted for my 6’3” frame, I could sit behind it without having my knees jammed into the seatback. It’s some kind of sorcery they’ve performed here. Even folding the rear seatback (it’s a 60/40 split folding rear seat) requires a single lever pull and that’s it. No need to remove the headrest, no need to fold the bottom cushion into the rear footwell and no need to move the driver’s seat forward. Just an easy one-touch affair for a completely flat load floor. Which is good, because the rear cargo floor isn’t that long; indeed, with an overall length of just 4,352 mm (for reference: a Mazda MX-5 measures 3,914 mm in length and a Nissan Micra, 3,827 mm), some sacrifices had to be made somewhere.

I guess the only real issue I have with the backseat – well, there are two, really – was that since they’re mounted so low for better headroom and the rear side windows are small and the front headrests tough to see over, the view out for backseat passengers is compromised. Those that have issues with motion sickness should take note. 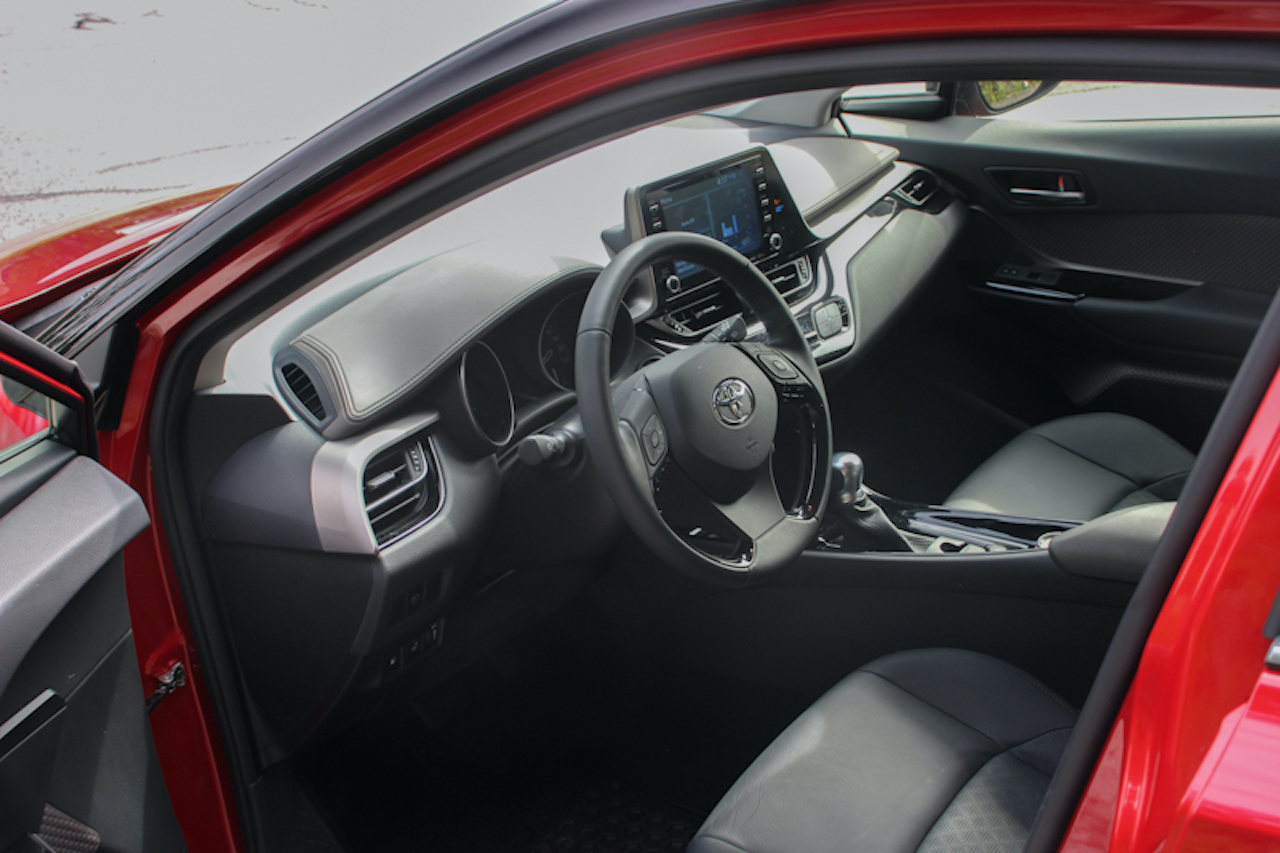 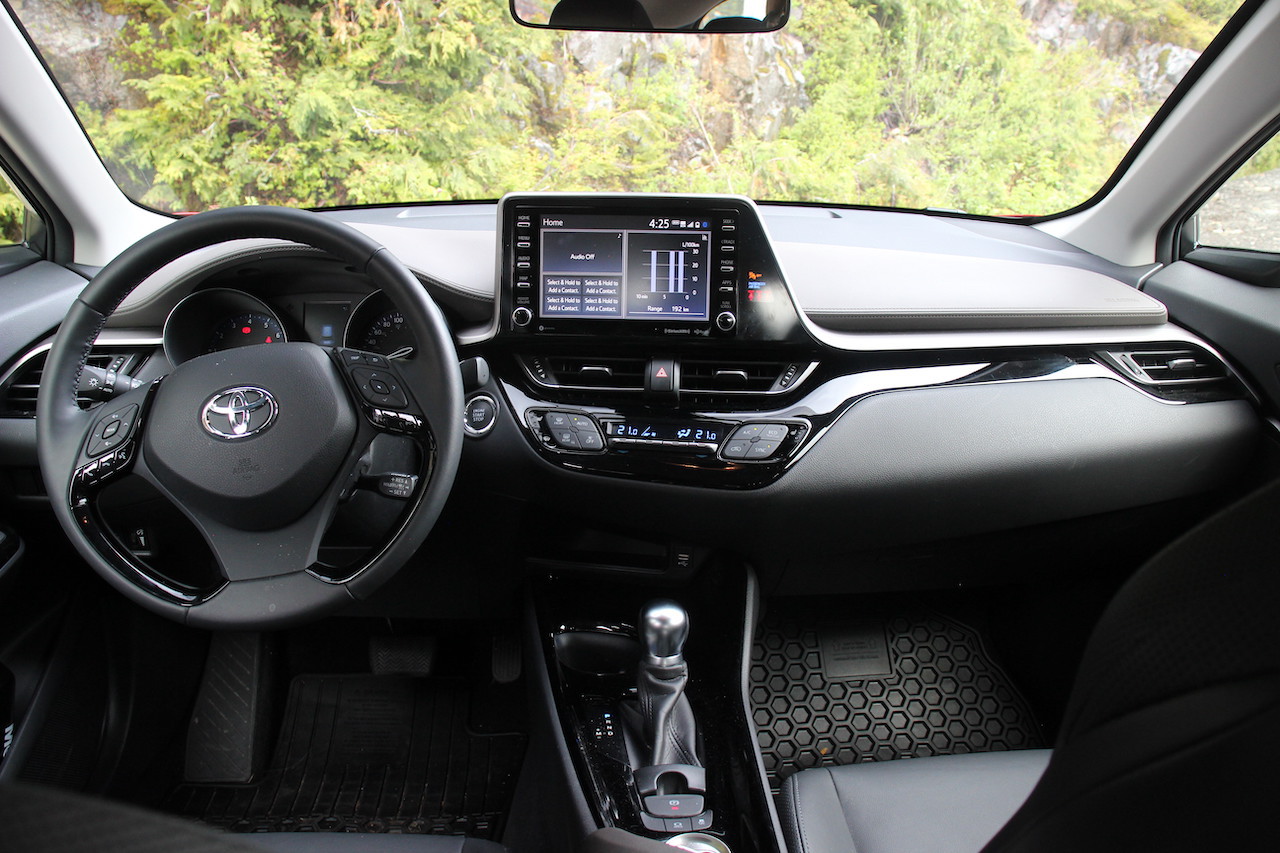 Issue number 2 is that there is precious little in terms of creature comforts in the back; no centre armrest or vents mounted to the back of the centre console, no heated seats and no USB ports but again this is a subcompact ‘ute that’s only likely going to be using its backseat to transport the little ones and they should be OK. Loading them in should be OK, as well; I though it would be a challenge to get my two-year-old daughter into her forward-facing car seat thanks to the C-HR’s sloping roofline, but that wasn’t the case thanks to the low floor and surprisingly wide door opening. This is a very well-packaged interior.

You have to make do with a whole heck of a lot of plastic, though. They’ve allegedly increased the usage of soft-touch materials in the cabin for 2020, but the door cards, sills and pillars are still crafted from the stuff.

Now for the USB thing, mentioned earlier. Try as I might, I couldn’t get it to work, and that includes ensuring I turned Apple CarPlay on within the C-HR’s native interface, which is an issue I’ve had with other Toyotas in the past. They’re the only vehicles I’ve ever had to do this for; usually, it’s a completely plug-and-play affair. So there was no CarPlay, and since there’s no option for a wireless charge system, no phone charging either. Then again: I received a call from Toyota after I mentioned this to them and they said their technicians had no trouble with it, so the whole thing continues to be a mystery to me. What isn’t a mystery, however, is that there needs to be more USB ports in general in a car like this. It’s one that’s aimed at younger buyers that love their tech, and could very well see the lack of a USB port or a wireless charge pad as a pretty big shortcoming here. 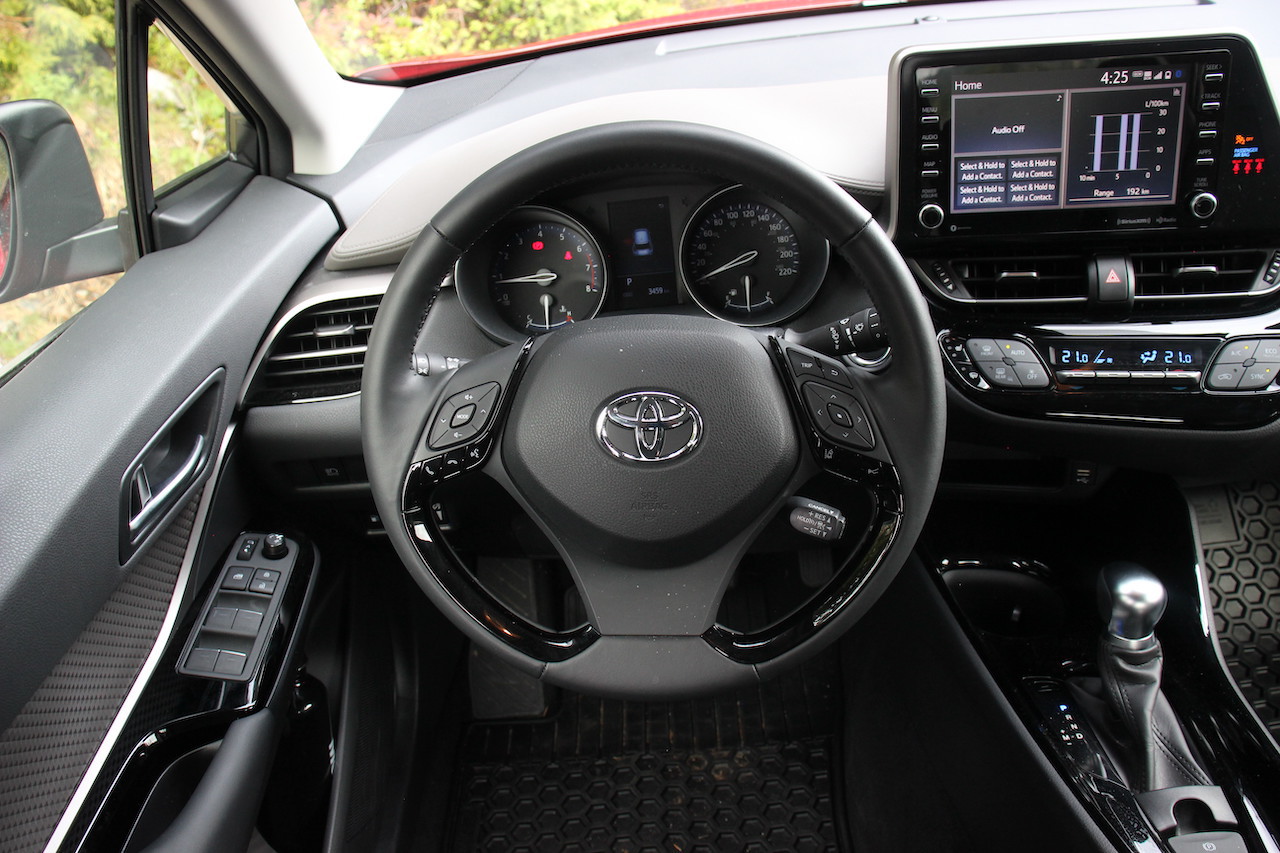 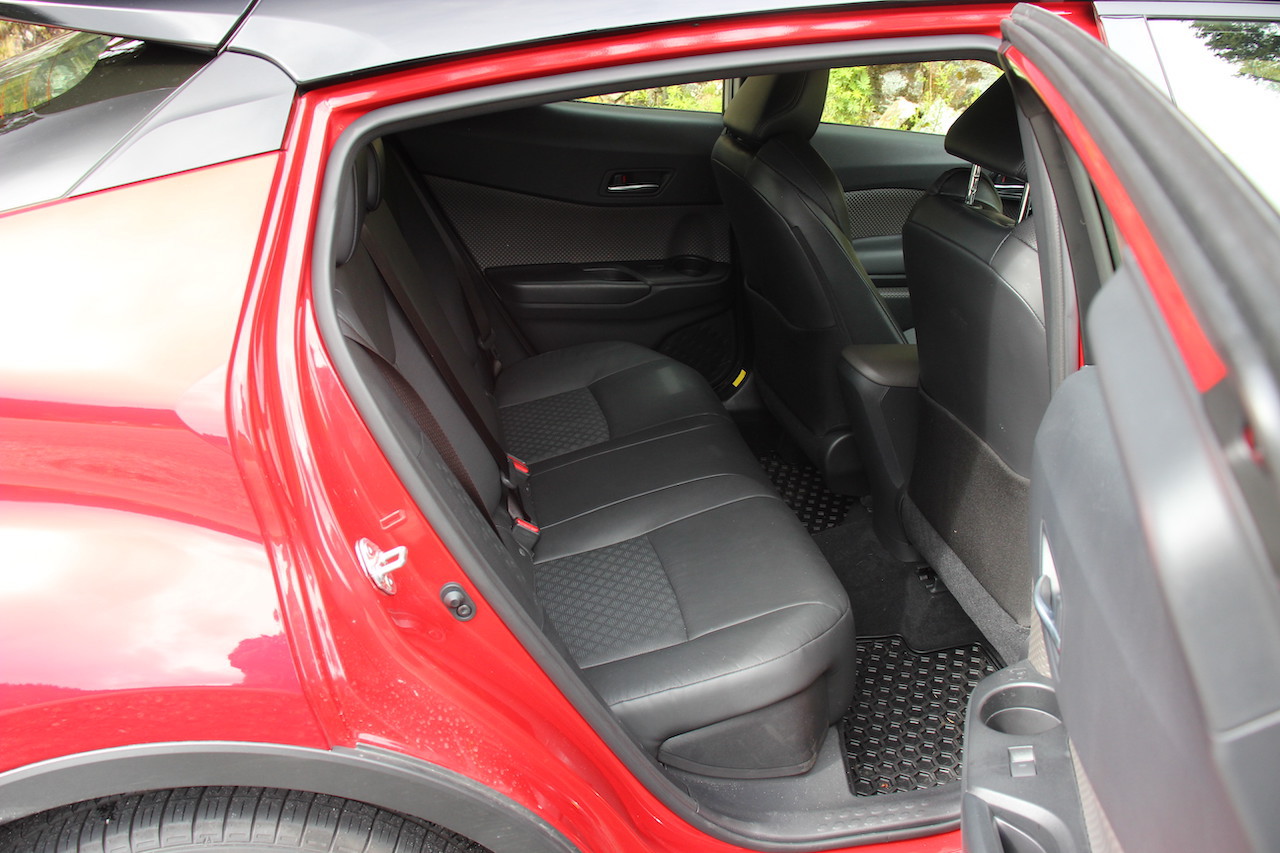 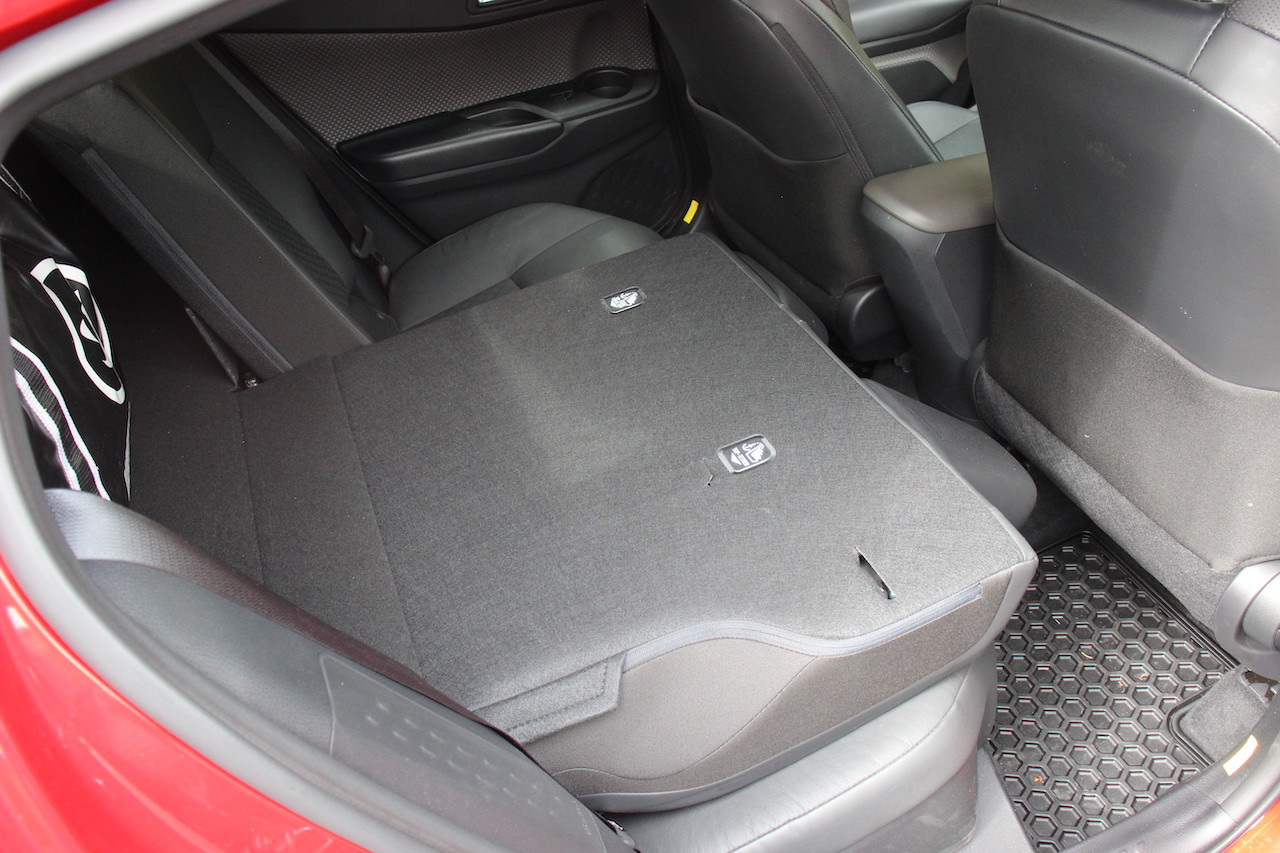 In fact, that could be more of a sticking point for them than the fact that the C-HR continues to not have an AWD option, while most of the competition – the Hyundai Kona, Mazda CX-3/CX-30, Honda HR-V, Ford EcoSport – all have an AWD option, as do certain European C-HR models. Some don’t, though – the Hyundai Venue and Nissan Kicks come to mind – so obviously, there are those looking at one of these that realize you really don’t need AWD in a vehicle like this. It’s not meant to go off road, it’s not even really meant to be a big road-tripping thing and even with the adverse conditions Canadians face in winter, a good set of snow tires should be fine for the urban work these are going to spend most of their time doing. That being said: buyers love the peace-of-mind and security that comes with owning an AWD vehicle, and I understand that. It could cause some people to skip the C-HR, opting instead for something with AWD.

They’d be missing out on a surprisingly fun and tractable ride, though. Power – all 144 hp and 139 lb-ft of it, which puts it close to the top of the segment, actually – is fed to the front wheels via a continuously variable automatic transmission (CVT). That should come as no surprise as pretty much every Toyota now gets one. But it is somewhat disappointing that it isn’t the trick CVT the Corolla gets. That version gets a traditional first gear for better launches, but the C-HR’s more basic item makes for a bit of a delay when setting off. After that, though, acceleration is smooth and when it comes time to make passes at speed, the C-HR is usually up to the task.

The power is nice, but the real highlight for the C-HR when it comes to the drive is the ride and handling. 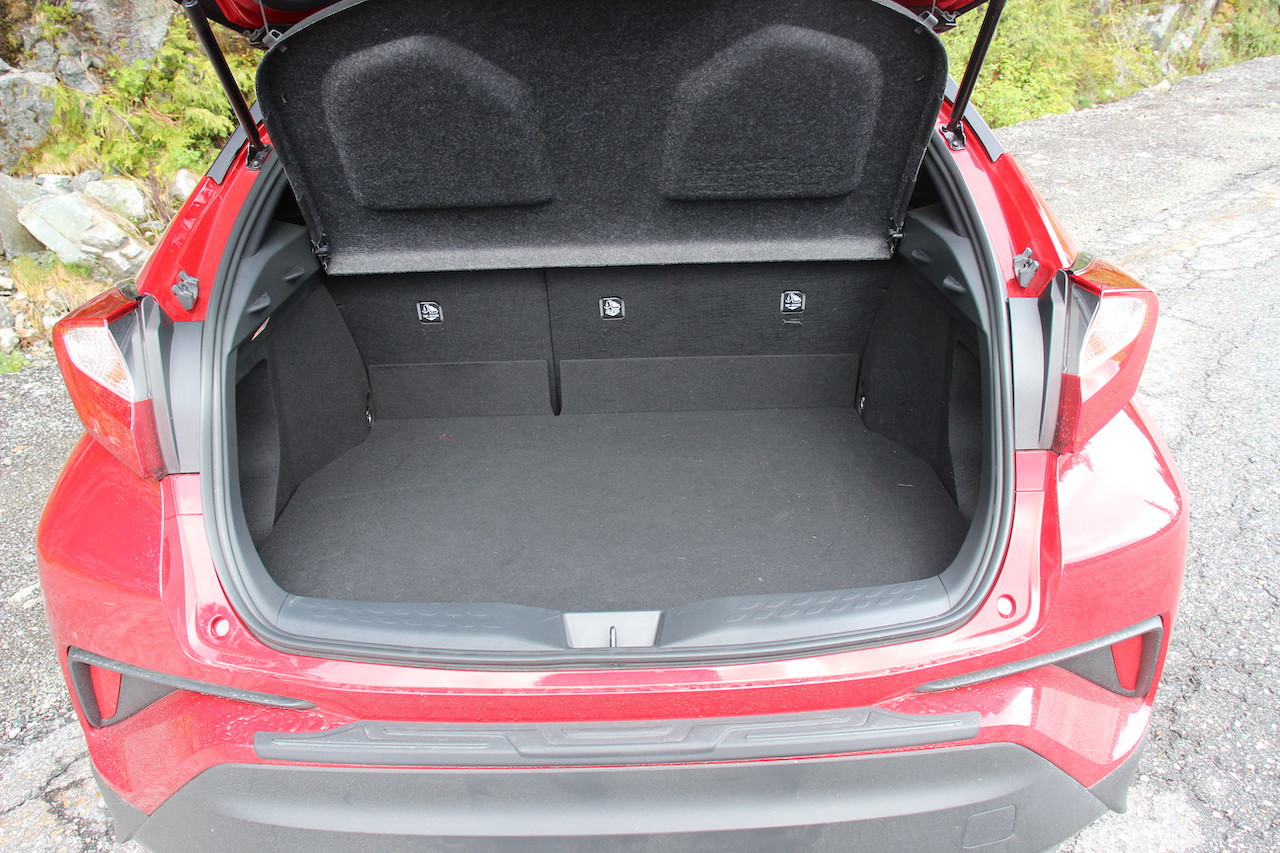 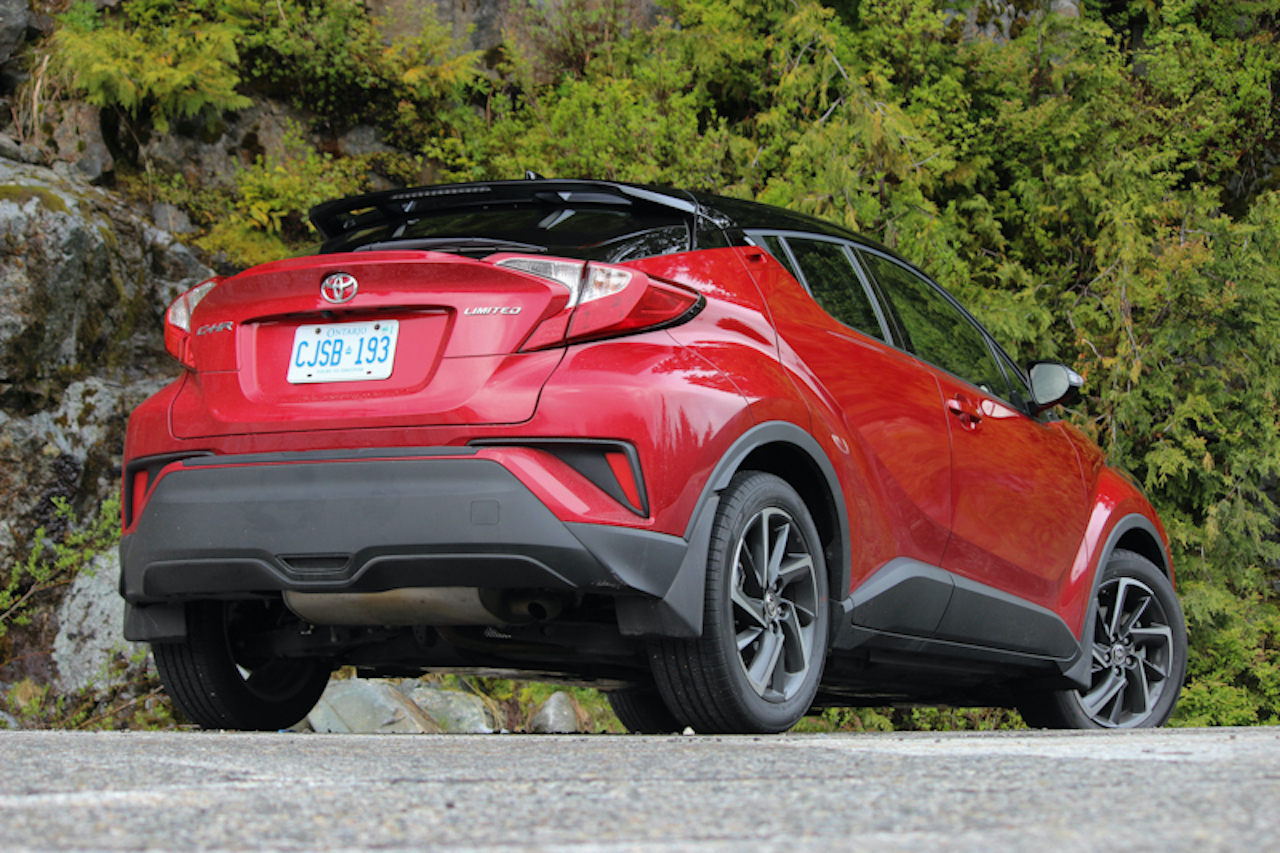 Surprisingly non-brittle over all but the harshest bumps, the C-HR responds to steering inputs with vigor and aplomb. There’s even a bit of feel through the steering rack and just enough off-centre deadzone so you’re not having to constantly correct to stay in your lane on the highway.

In the city, meanwhile, the short wheelbase that does so well to carry you through faster corners (with very little body roll, to boot) means tight maneuvering in the urban jungle is made easier, too. Parking is a breeze as well – both in perpendicular or parallel fashion – another benefit of such a short wheelbase and responsive steering rack. Yes, the D-pillars are a large and over-the-shoulder blind spots are present, but the backup cam is good and it’s not an issue that I noticed all that often, in fact.

Its manners in the city show the “compact high rider” is a vehicle built with small, young, urban dwelling families in mind and that is plain to see. It works incredibly well in that environment – totally as advertised, and it’s tough to ask for more than that. The more I think about it, the more I realize that the C-HR is great because it knows what it’s meant to do and it does it well. It looks like a youth-oriented vehicle should and it puts on no airs. I’m sold.