Comfortable, thoughtful, and a heck of a V6

The Highlander has been a highlight in the Toyota lineup for three generations, growing its entire segment and being one of the first crossovers you could get with a hybrid driveline. So there’s a lot of pressure on Toyota to make this all-new fourth-generation a hit and that goes double for the non-hybrid model as Toyota (and everyone else) grow increasingly electrified. For me, the last-gen Highlander was the only Toyota model I comfortably fit in, and so I was hoping that I’d still be able to get comfy in this new one.

Now based on the platform that first debuted under the new Camry in 2017, the Highlander has grown slightly on the spec sheet. It is now 60 mm longer overall and about the same in the wheelbase, only just a hair wider, and the exact same height. Inside, while Toyota claims larger dimensions in most areas, I found headroom both front and rear to be extremely limited. While knee room was fine (except in the third row, but this isn’t the class of vehicle you want if you’re planning to put an adult in the back), if your passengers are much more than six-foot or long of torso, you’ll want to make sure to bring them along to make sure they fit and not making contact with the glass roof.

While the body is new, the engine is old. It’s Toyota’s venerable 3.5L V6 that they put in nearly everything from cars to pickups, and this is a great implementation of the motor. The V6 needs to be good, because right beside it in the Toyota showroom is the hybrid model that uses a little more than half the fuel. What that hybrid powertrain doesn’t offer, though, is character. And if you weren’t expecting character under the hood of a midsize crossover, especially a Toyota, you’re in for a treat. Free-revving and with an eight-speed gearbox that loves to quickly send it to redline, these 295 horses are much more fun (and much more in quantity) than the Hybrid’s 243. The engine sounds thrilled to be called to task, too, and the rear driveline disconnect when you don’t need AWD helps keep the fuel economy down. The sticker calls for 10.3 L/100 km combined, and that’s about exactly what I saw on the computer. Eco and Sport settings are available, as are off-road modes, but there’s not much difference in driving experience between them. 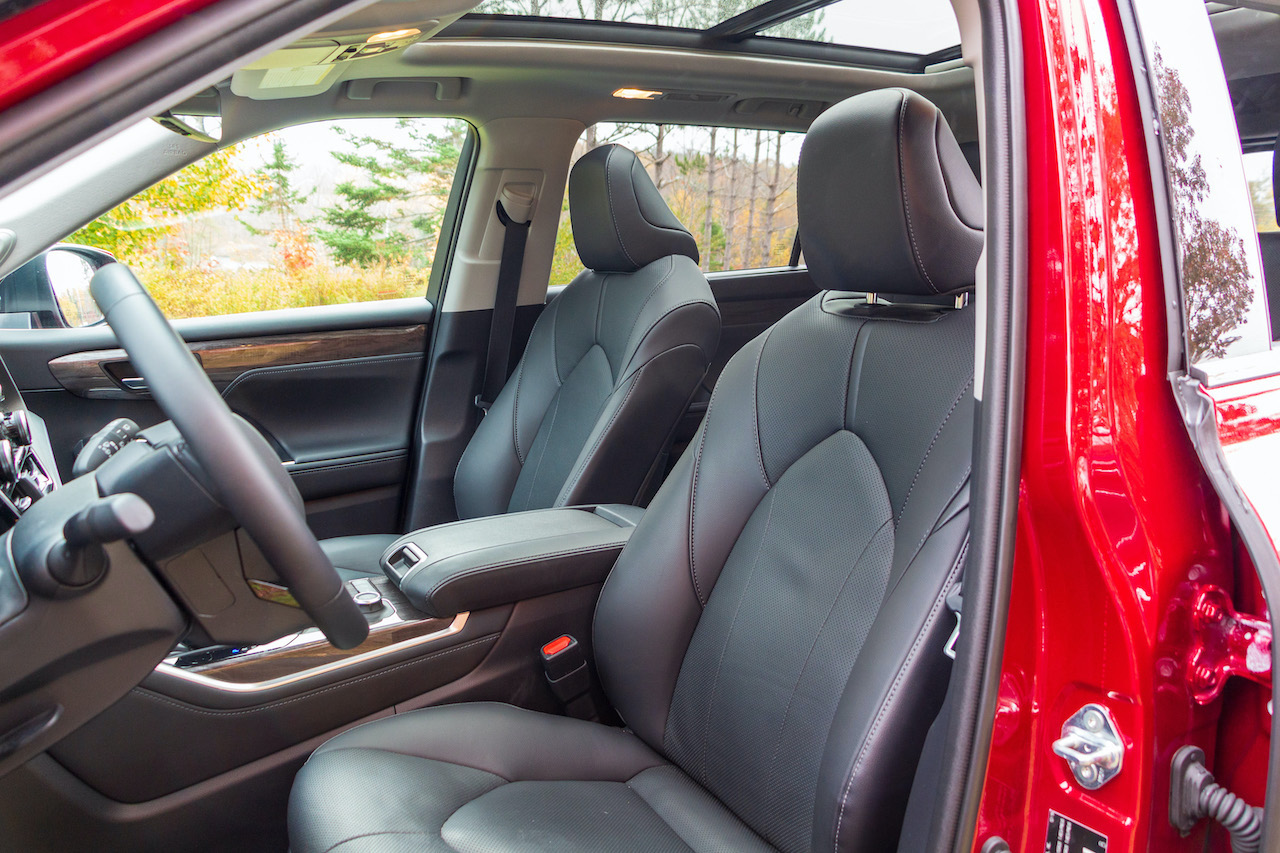 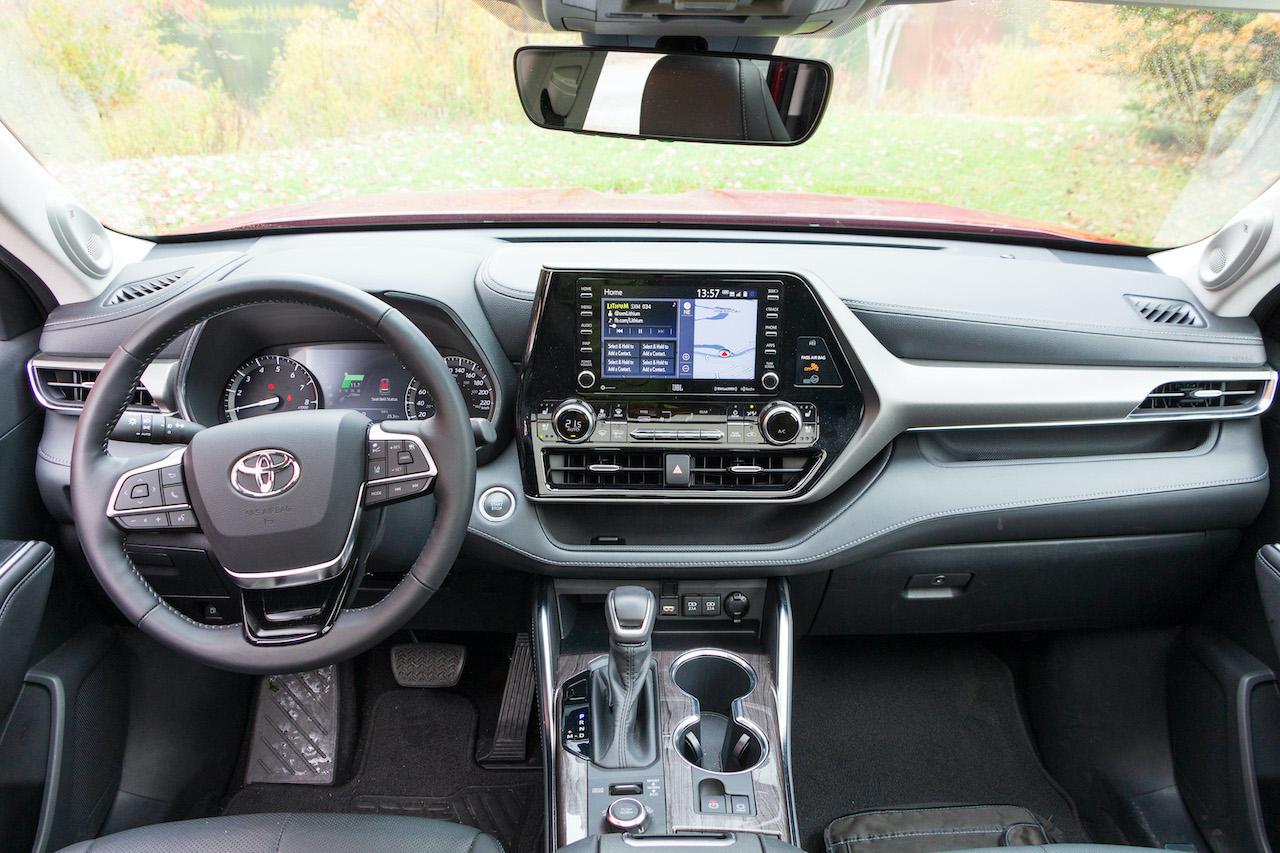 This Limited trim tester wore 20-inch alloys, but Toyota’s suspension engineers are smart enough to still give it 55-series tires. That extra sidewall means less jarring over pavement problems and bumps than the rubber bands of most modern crossovers, further helped by the soft suspension. Don’t confuse soft with ‘floaty’, though, this one won’t wallow and wave over dips like much of the class. And though it’s not putting the sport in sport utility, we’d prefer our crossovers to be comfortable and our sports cars to be firm, thanks very much. Steering is surprisingly quick and direct, and while there is body roll, it’s kept well in check.

Toyota has made this one even more family-friendly by absolutely loading the cabin with storage compartments. You’ve got the usual large door pockets and a space in front of the gearshift, but wait, there’s more. Another storage slot big enough for a couple of phones (or masks) right under the radio and an even longer spot in the passenger side dash. The armrest opens first to reveal the available wireless phone charging spot, then opens again to a huge cargo hold. Cup holders for the second row were surrounded by SUB ports and an 110V outlet, and there are cup holders and cubbies in the third row. It’s an impressive bit of attention to the vehicle’s role, and one that makes the Highlander a little bit nicer every day.

If you step up to the very top Limited Platinum trim you get a 12.3-inch display that’s the largest in class (at least for now), but if you get any other Highlander you get an 8-inch screen. That screen does have both Android Auto and Apple CarPlay support, but Toyota’s built-in infotainment’s speed, ease of use, and visibility does lag behind the competition making it frustrating. The big screen would go a long way to solving the latter two issues, but you need to pay to play. 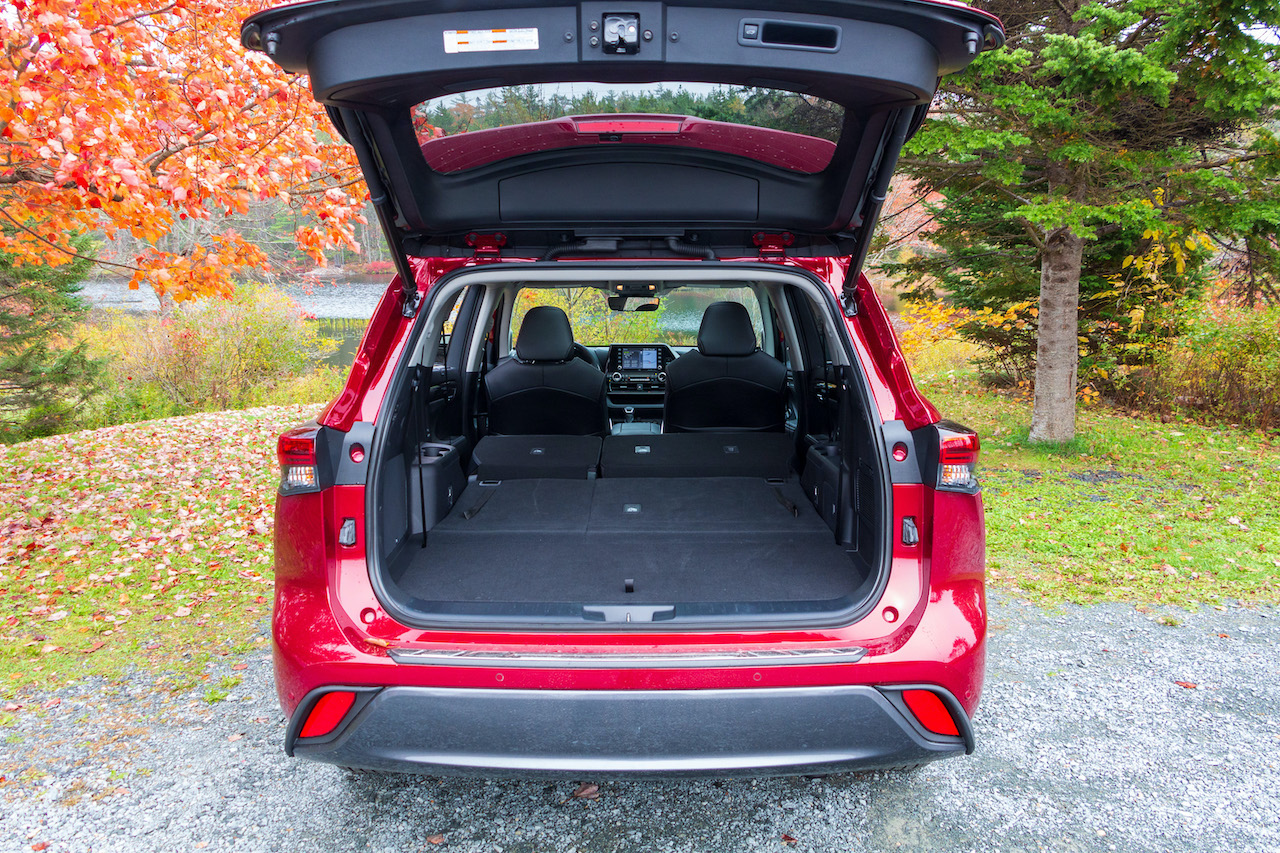 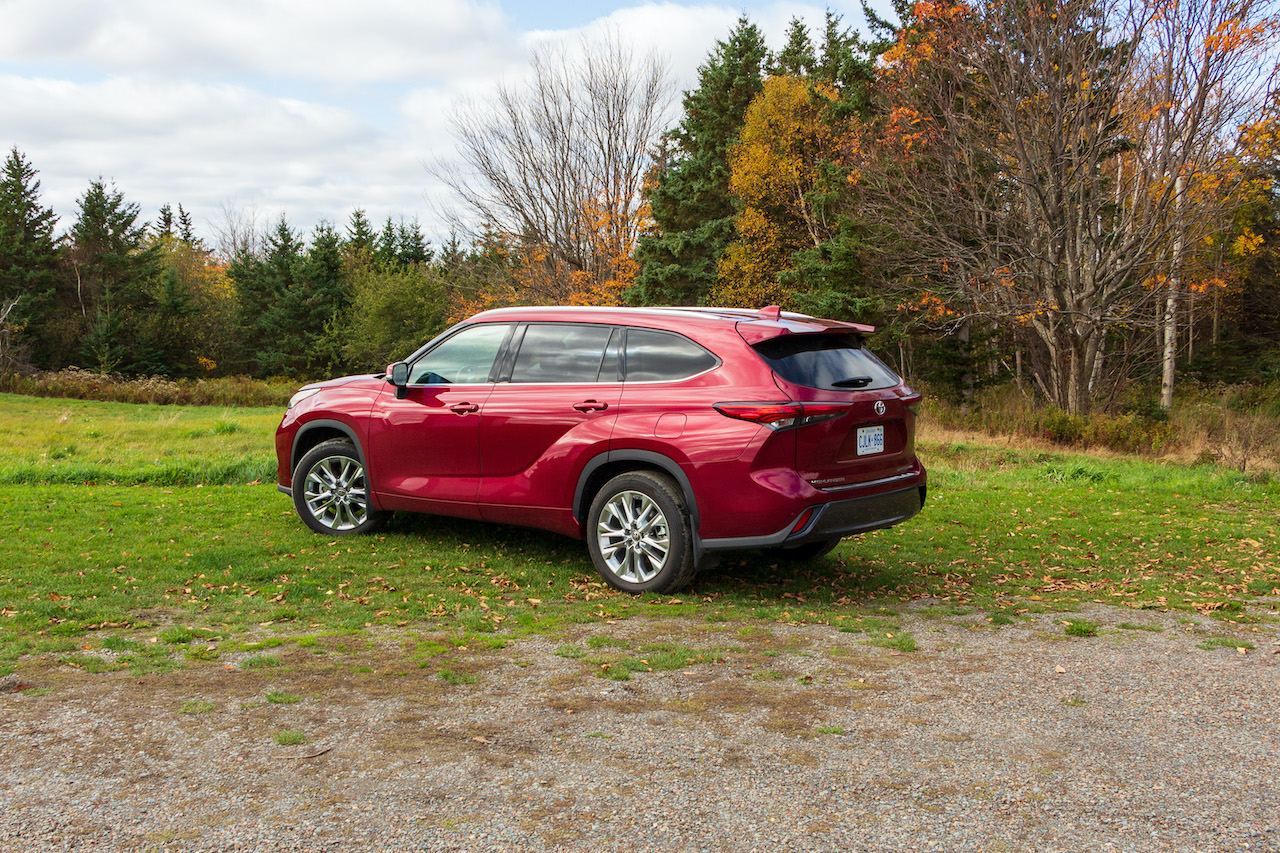 Directly below the screen, Toyota has given you plenty of buttons to control temperature, fan, the seat heating and cooling, and the volume and tuning. While not every control can be handled via the switches, all of the important ones can, and it’s appreciated.

As always, Toyota has gone big on driver assistance, and this has Toyota Safety Sense 2.0 including lane departure alert with steering assist, road edge detection, auto brights, pedestrian and cyclist detection, and adaptive cruise as well as blind spot and rear cross traffic alert. All standard from the base model. Limited adds parking sensors, but Platinum is required to get surround-view. The rear-view camera here, despite being a brand-new model, was low resolution and provided poor exterior visibility in all but the best lighting conditions. Combined with the tiny rear glass, small mirrors, and large pillars, outward visibility to the rear left much to be desired. Or seen.

The Toyota Highlander’s mission is to be quiet, comfortable, efficient, and laid out in a way that makes your day easier, and the new one does that even better than before. It’s not the biggest or the cheapest, but it might be the best in the segment at those four things mentioned above. But why would you get this V6 model over the even more efficient Hybrid? Well, the $2,000 hybrid premium might dissuade you, but if you’re not ready to be done with fun completely, this V6 brings the big crossover to life. Meaning you can still have some fun on the school run. But I don’t fit in the back seat anymore.